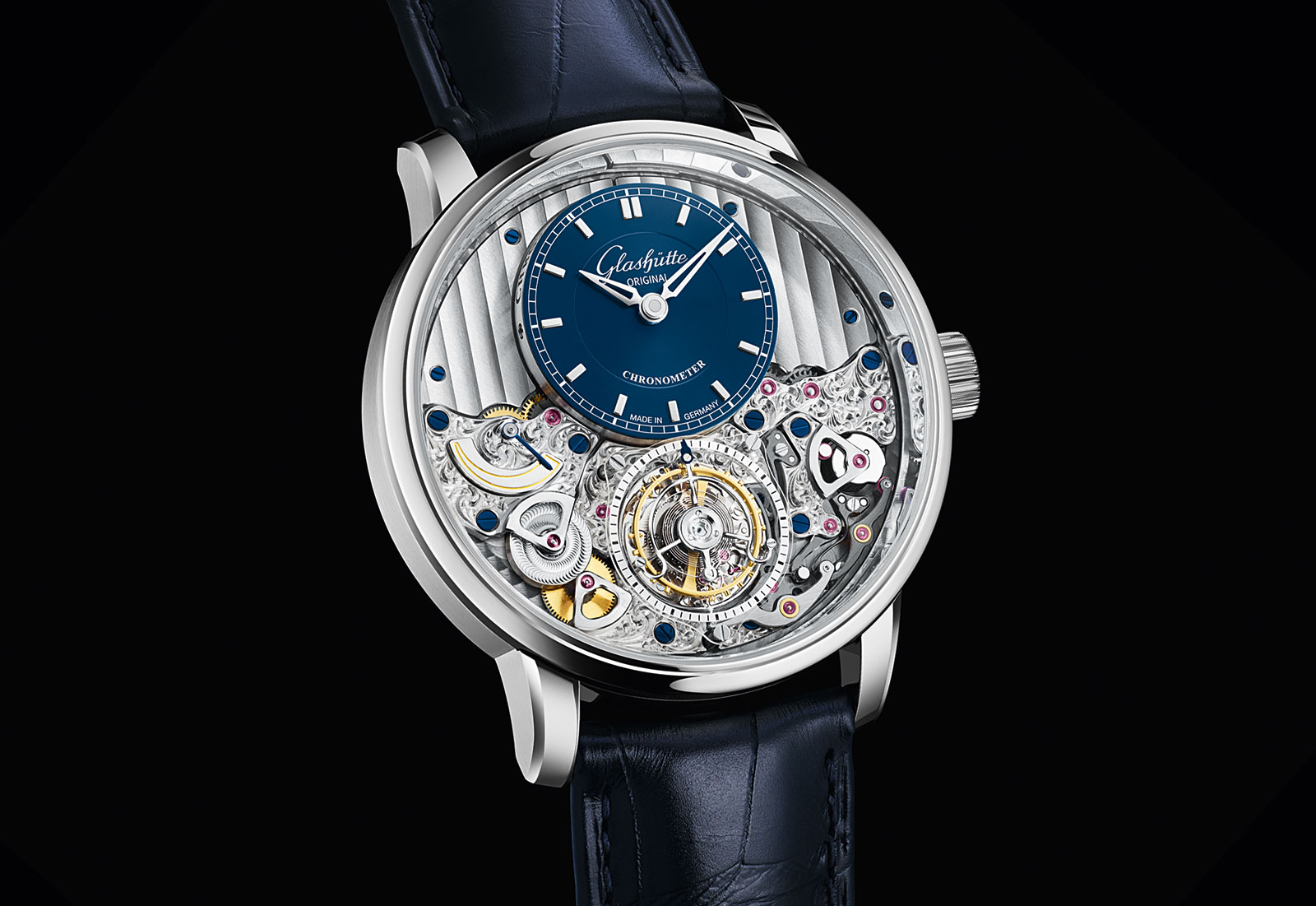 Of the slew of new launches at Swatch Group’s Time to Move event, arguably most notable watch from a chronometric perspective – surprisingly – is the Glashütte Original Senator Chronometer Tourbillon.

It’s all packaged in a 42mm platinum case that has a dark metallic blue sub-dial for the time. 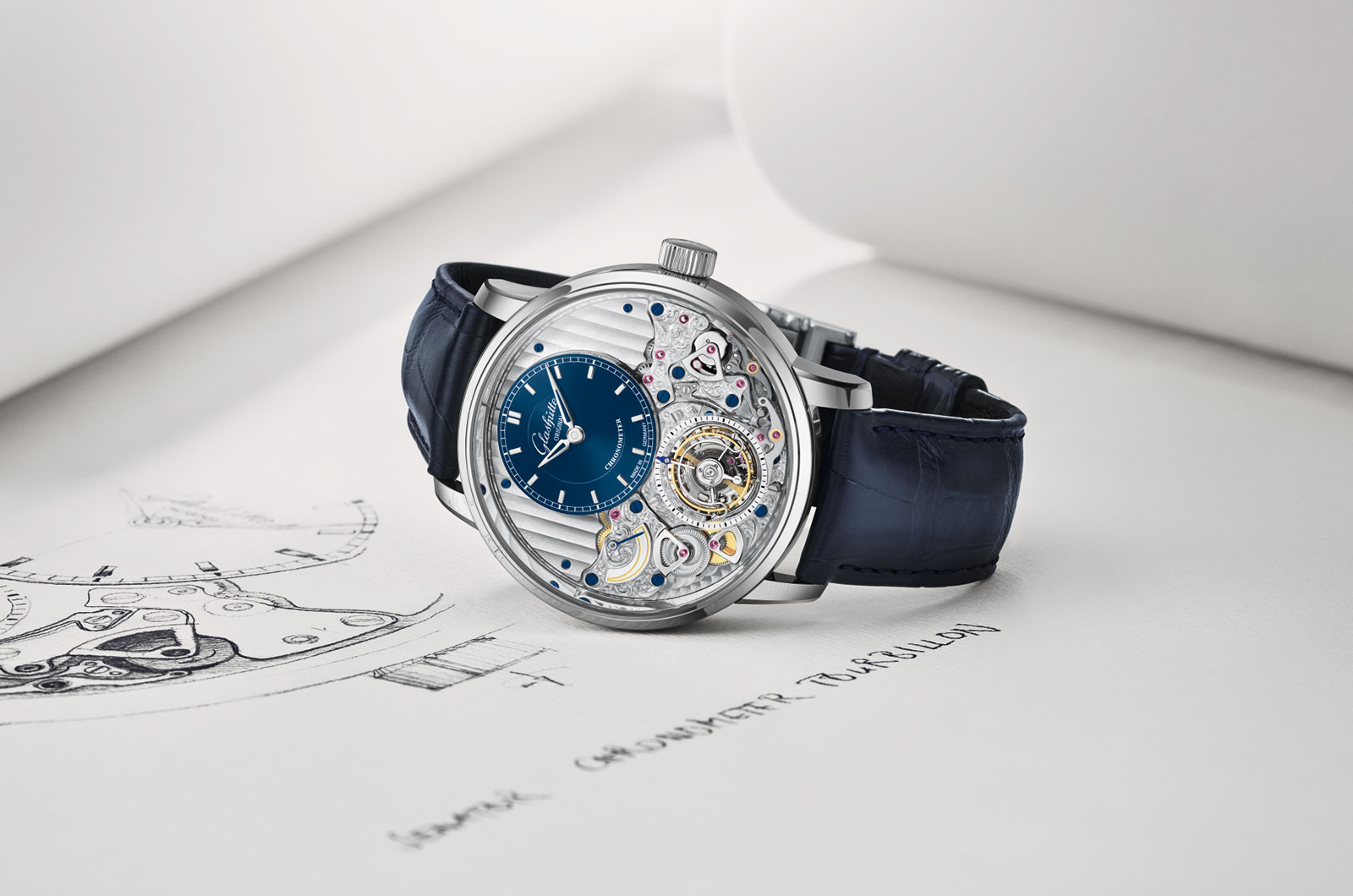 Built in the traditional Glashütte style with the signature cage – the flying tourbillon was invented by local watchmaker Alfred Helwig in 1920 – the tourbillon has one arm of the cage doubling up as a seconds hand, travelling along a raised, sapphire crystal seconds track. 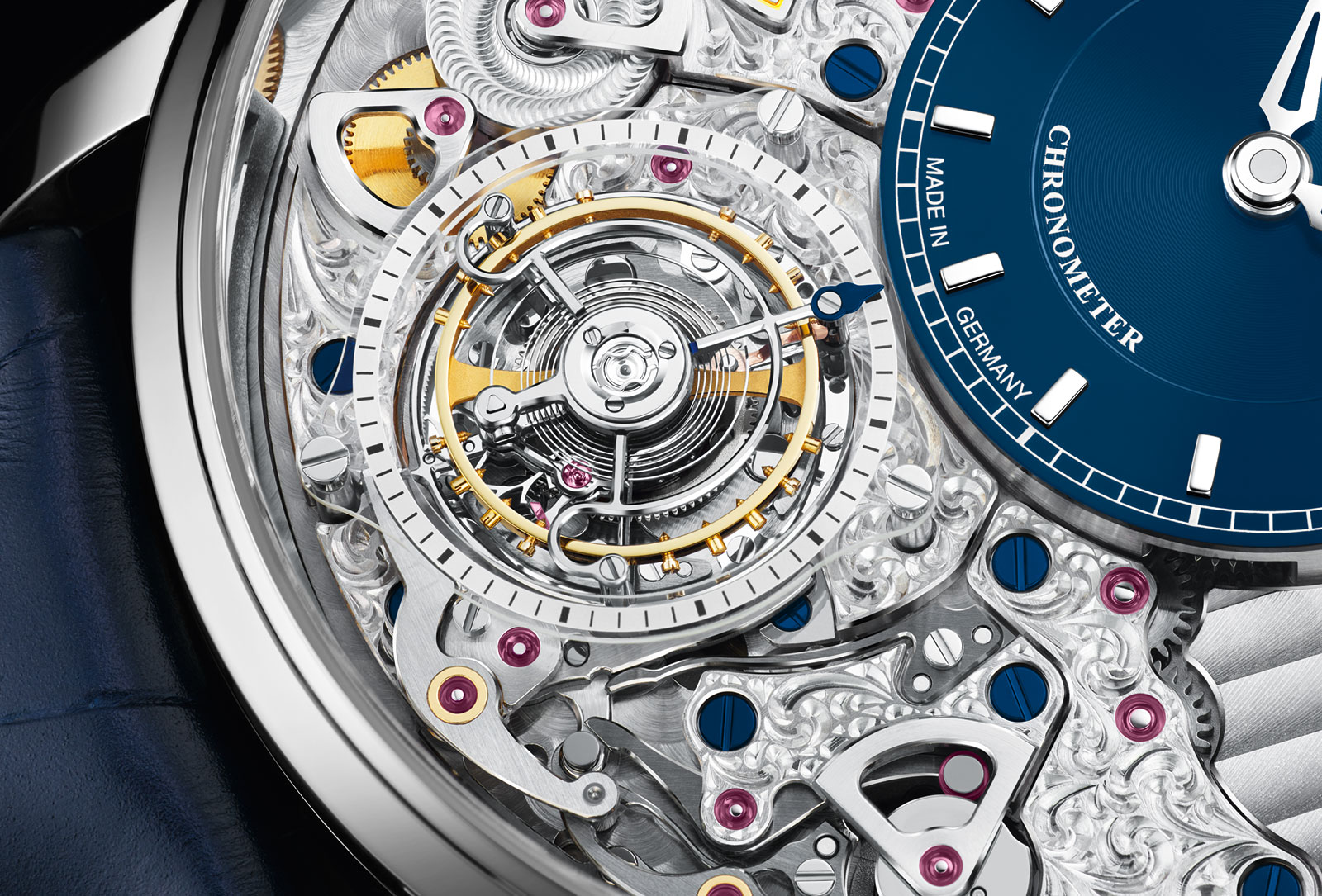 Pulling the crown out first stops the seconds, via a lever driven by a vertical clutch that touches the tourbillon cage, stopping both the cage and balance wheel. Then as the crown as pulled to its maximum, the seconds hand flies forward in clockwise direction, returning to zero and stops there. 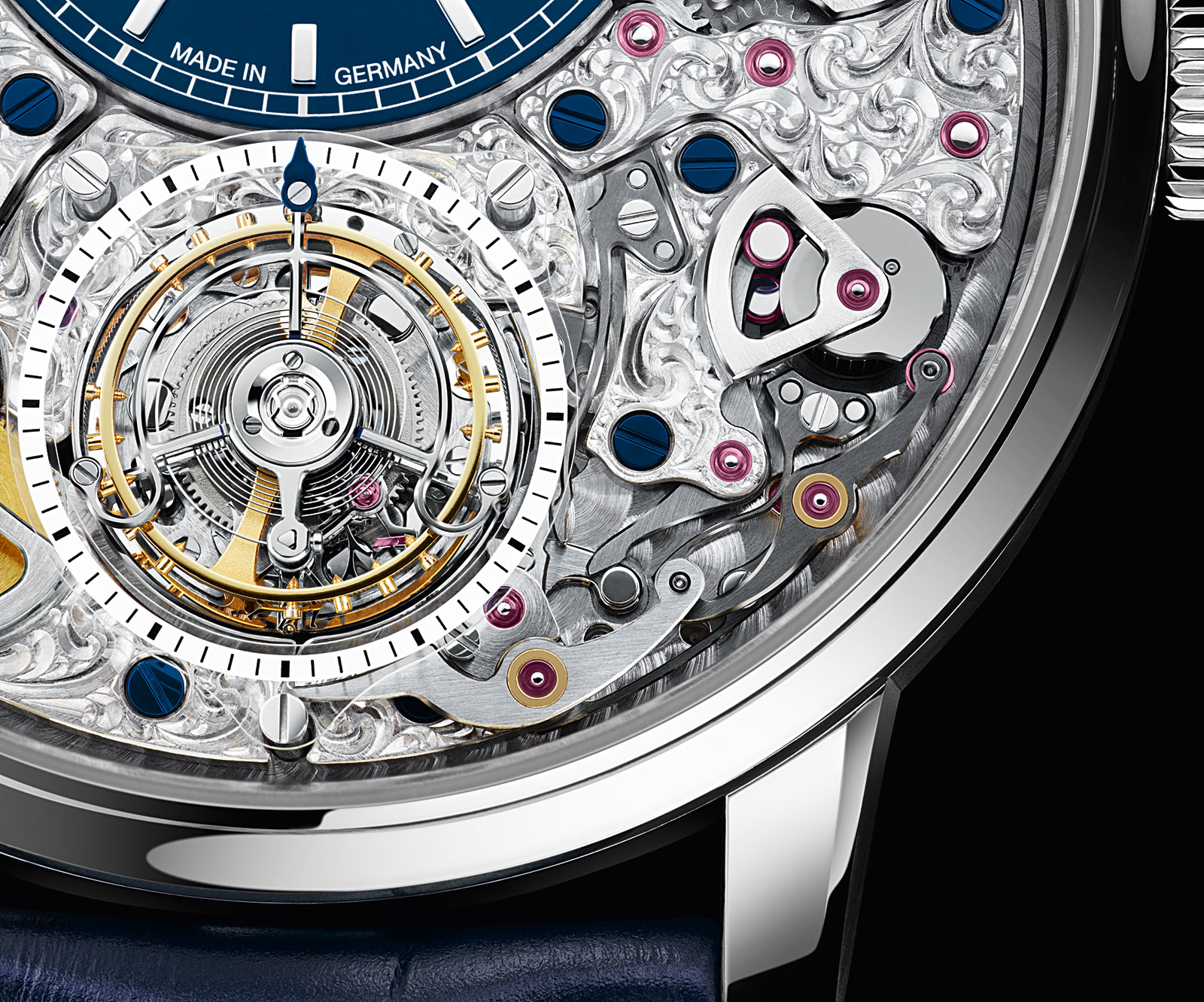 But crucially, at the same time this happens, the minute hand jumps forward to the next minute hashmark, so both the seconds and minute hands are synchronised.

The time can then be set correctly, and thanks to a rotational damper, the movement of both the minute and seconds hand are smooth and in sync. Then the crown is pressed back in, which restarts the tourbillon and balance wheel. 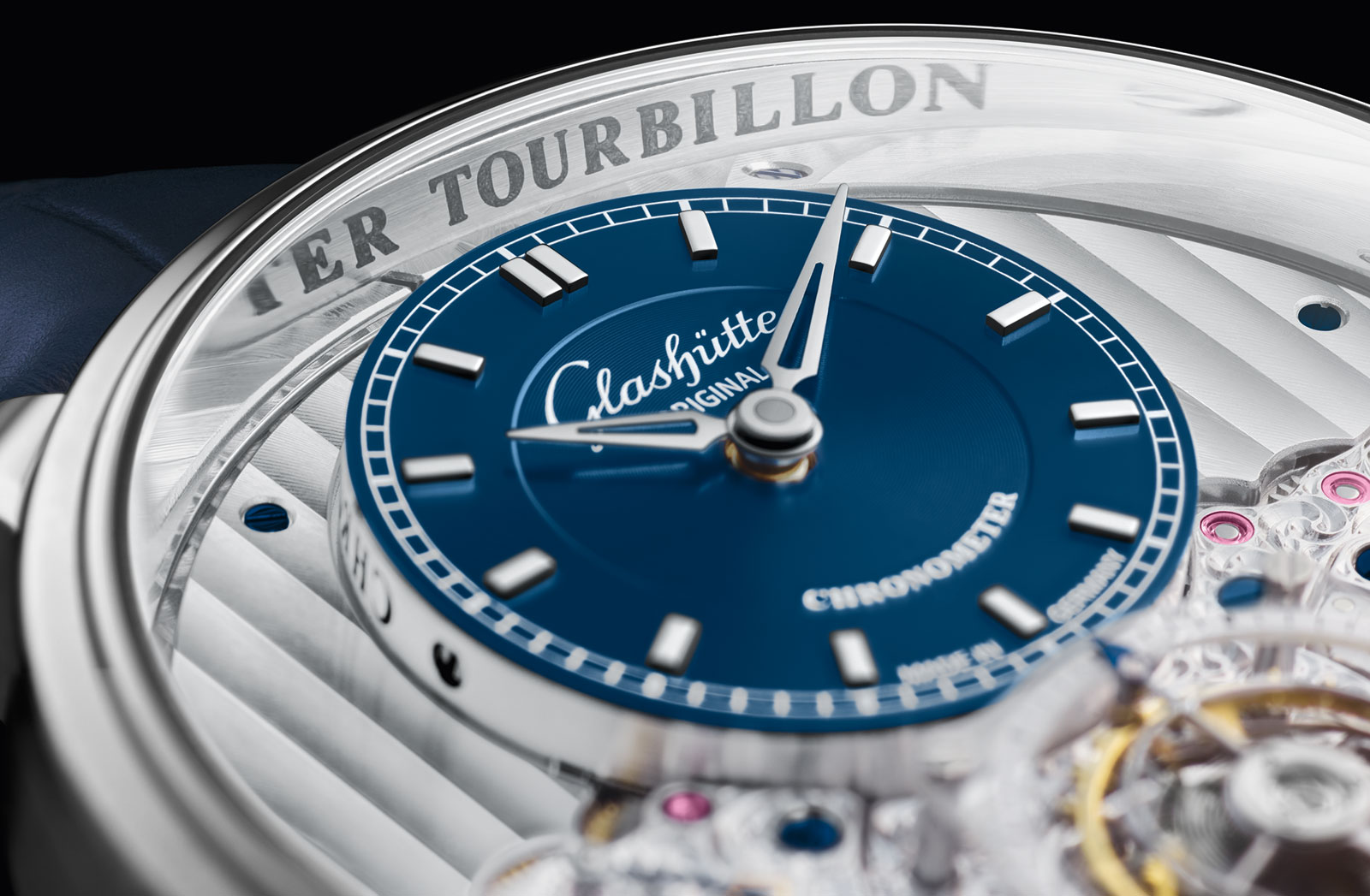 The mirror image of “Chronometer Tourbillon” is engraved on the flank of the sub-dial, so it reflects the right way up on the polished dial flange

The Senator Chronometer Tourbillon is also a bona fide chronometer, having been tested to DIN 8319, a German technical chronometer standard, by the Deutscher Kalibrierdienst (DKD), or German Calibration Service.

Testing in done in the former astronomical observatory in Glashütte, and a handful of other local brands, including Nomos and Wempe Chronometerwerke, also test their watches in the facility. It entails a 15 day test with the watch in five positions, and at three different temperatures. 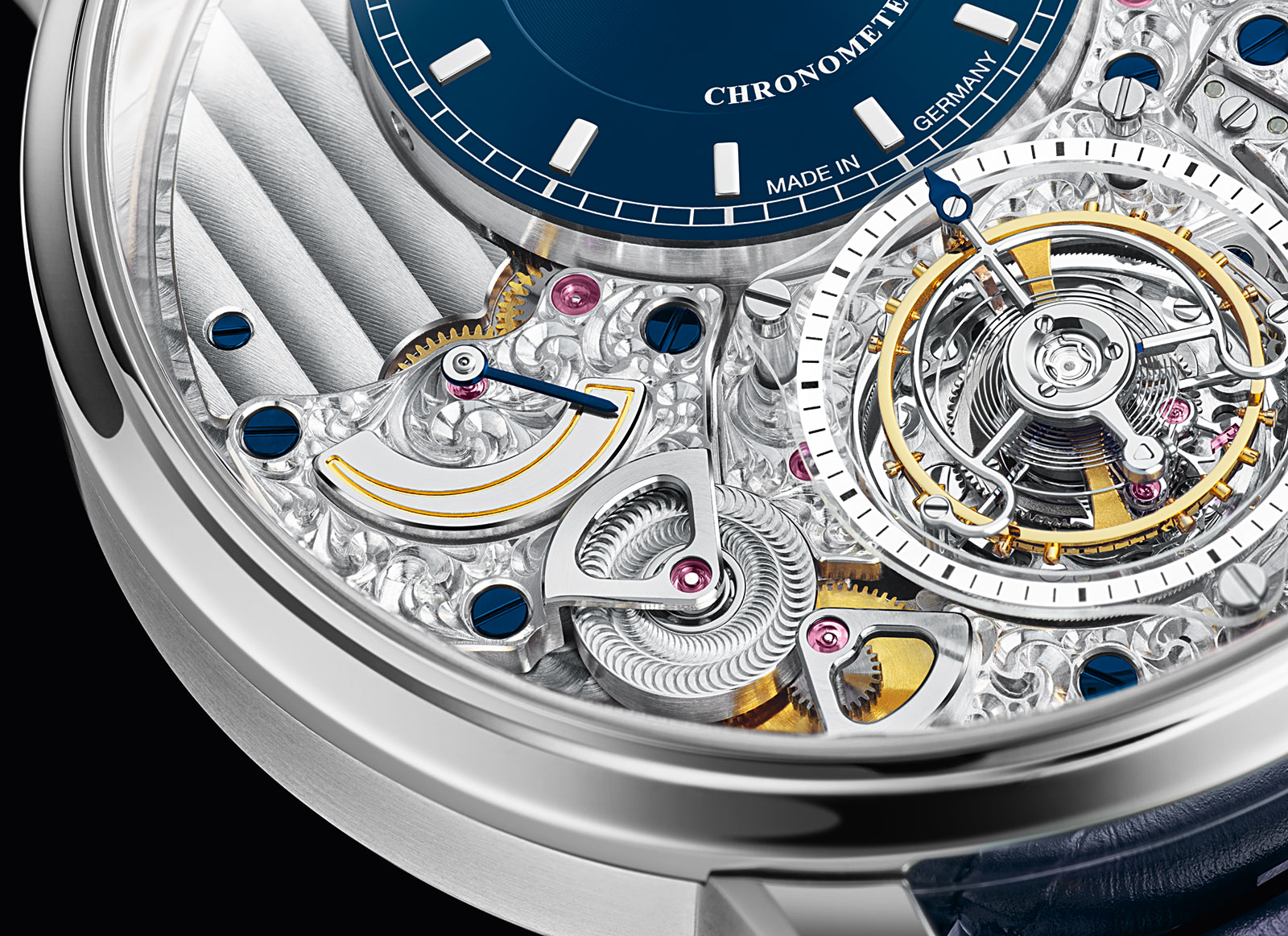 While the bridges and plates are finished traditional Glashütte ribbing, the base plate around the flying tourbillon is engraved by hand with a floral motif.

And as is the case with most watches from sister brands in the Swatch Group, this is equipped with a silicon hairspring.

Open-worked and hand-engraved, now with a white gold case.