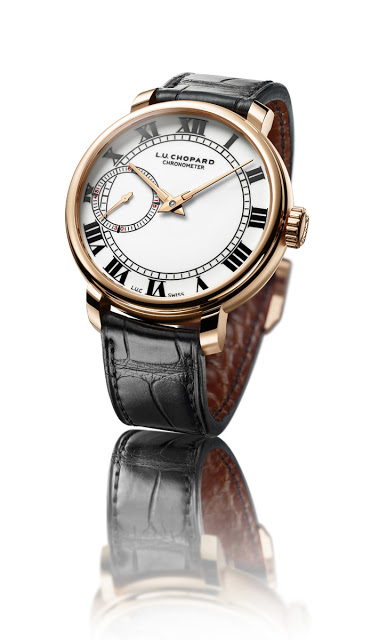 Created to mark the 50th anniversary of the Scheufele family’s ownership of Chopard, the L.U.C. 1963 is a limited edition, chronometer wristwatch fitted with a newly-developed but eminently traditional movement, LUC Calibre 63.01-L.

Notably, the movement is derived from the large, manual wind movement created by Chopard in partnership with the Ecole d’Horlogerie de Genève (Geneva Watchmaking School) three years ago, the L.U.C EHG. The calibre is used by all students as a school watch, which they have to complete by hand as a graduation project. As a result, the movement in the L.U.C 1963 is executed to a high level, not unlike the finishing that a student would aspire to. Measuring a sizeable 38 mm in diameter, the LUC Calibre 63.01-L has several features found in traditional, high-end watchmaking, including the black polished steep cap on the escape wheel cock and the swan neck regulator. Though classical in appearance the movement has the functions of a modern calibre – it beats at 28,800 bph and has a 60 hour power reserve. Beautifully as the movement is – and most Chopard LUC calibres are exemplary in their category – the LUC 1963 has an awkward dial, especially in the overlapping, bull’s eye sub-seconds and the shape of the hands. The dial is white lacquered Two versions of the LUC 1963 will be available, rose gold or platinum, both of which are limited to 50 numbered pieces. The rose gold will retail for 47,900 Singapore dollars including 7% tax, equivalent to US$37,800. Pricing for the platinum has yet to be announced.