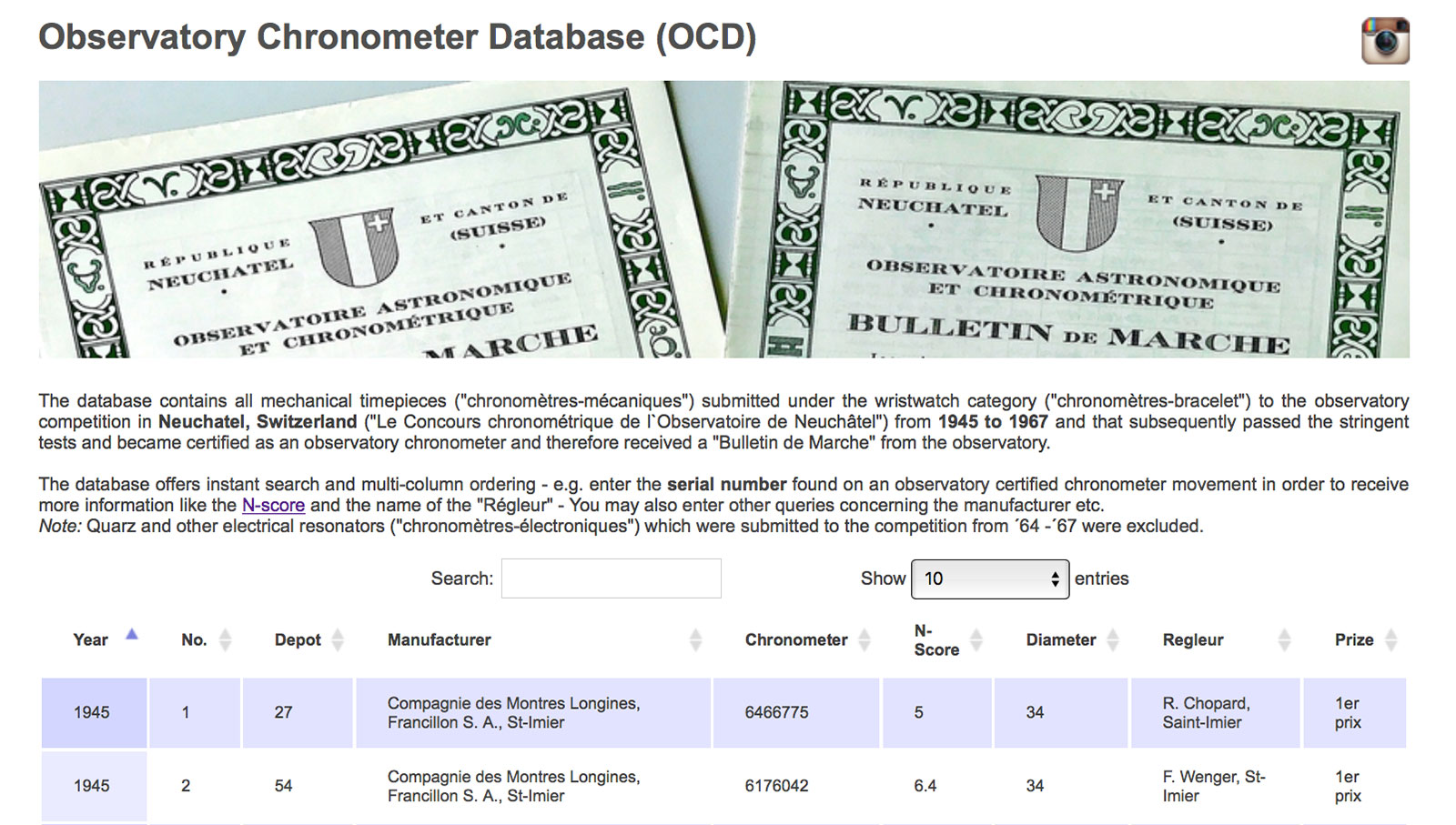 Put together by Dr Christian Müller, the Observatory Chronometer Database (OCD) is a comprehensive compilation of all 3356 wristwatch movements ever submitted to the Neuchâtel Observatory for testing between the years 1945 to 1967 – the golden age of mechanical wristwatch chronometry.

Then known as the Observatoire Astronomique et Chronometrique de Neuchatel, as it was described on historical chronometer certificates, the Neuchâtel Observatory conducted annual contests for various classes of timekeepers, from pocket watches to wristwatches, both mechanical and quartz (the OCD only covers mechanical wristwatches). Comprised of a series of timing tests, the test took place over several days and resulted in an individual score for watches that passed, which were then certified as observatory chronometers, receiving a bulletin de marche.

Because of Neuchâtel’s location in the heart of the Valley de Joux – essentially the watchmaking valley of Switzerland – the chronometric contests brought together most of the great and the good of watchmaking in the valley, with the entries dominated by Omega, Longines and Zenith. But because the contests were open to anyone, movements also came from halfway across the world when Seiko entered in the 1960s.

The OCD lists every wristwatch that ever passed the Neuchâtel Observatory’s tests, including crucial details like the movement serial number, movement size, regleur (the watchmaker who did the regulation), as well as N-score, short for nombre de classement. Even a casual perusal of the database makes for fascinating reading. Seiko, for instance, first entered in 1964 and recorded its worst score a year later, with a Suwa Seikosha (the brand entered as two different corporate entities) movement receiving an N-score of 17.71.

In 1967, a Daini Seiko movement scored 2.04 (the lower the score, the better), making it the sixth highest scoring wristwatch movement ever tested; the best score ever was for a 30mm Omega that scored 1.73 in 1967.

The Neuchâtel Observatory is still in operation, but no longer performs chronometer testing. Amongst the reasons the chronometry contests were terminated in 1967 was the simple fact that the Swiss could not stand for Seiko – a Japanese watchmaker – winning the top prizes consistently.

The result of the research by several scholars Dr Müller is acquainted with, the OCD is meant to “help spread knowledge and shed some light on an era which lasted for more than a century”, according to Dr Müller, a medical doctor in Germany by profession but a chronometer enthusiast at heart. While the OCD only covers wristwatches tested at Neuchâtel, Dr Müller’s goal is to complete similar databases tested at the Kew, Besançon and Geneva observatories.

The OCD can be accessed for free here.