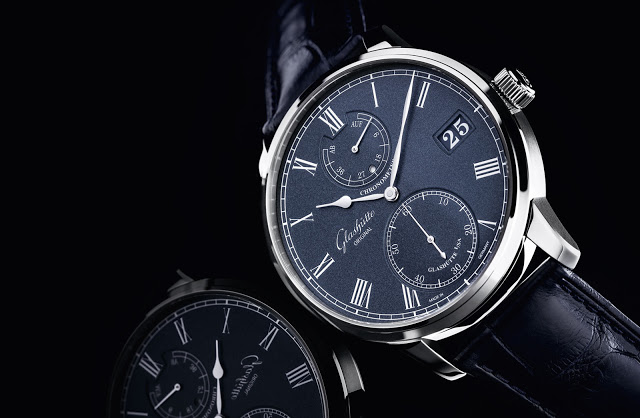 Introduced several years ago, the Glashütte Original Senator Chronometer is a clever timepiece inspired by vintage precision clocks made for navy ships. Originally available only with a silvered dial like those found on the original marine chronometers, the Senator Chronometer will soon be launched at Baselworld 2016 with a dark blue dial featuring a grained finish.

The calibre 58-01 inside is, like all movements by Glashütte Original, made entirely in-house, a consequence of the town’s isolation when it was part of East Germany, making it necessary to be self-sufficient. But it has unusual features designed for precision timekeeping, and importantly, precision time-setting. When the crown is pulled out to set the time, the seconds hand resets to 12 o’clock and freezes, while the minute hand moves in exact, one-minute steps. That means the minutes and seconds can be set as precisely as humanly possible according to the time signal. In addition,it also features an extra-large date display at three o’clock.

Visible through the display back, the calibre 58-01 is attractively decorated, and constructed in the style typical of watches from the town of Glashütte. It has a three-quarter plate, jewels in gold chatons, as well as an engraved balance cock. Another notable feature are the planetary gears on top of the barrel for winding. A deep blue with a matte, grained finish, the dial is coated with several layers of lacquer to achieve the right shade of blue, while the minute track, hour numerals and other markings are engraved and silver-plated. The blue dial is a product of Glashütte Original’s own dial factory, a recently acquired facility located in Pforzheim, a town on the edge of the Black Forest historically known for its jewellery specialists.

Since the firm acquired its own dial maker, it has been experimenting with dial colours beyond the conventional silver and black, including the psychedelic tones found on the Sixties Iconic Collection limited editions. Dial aside, the watch is identical to the existing models of the Senator Chronometer. The case is white gold and 42 mm in diameter, standing 12.47 mm high, giving it significant wrist presence.  Pricing has yet to be announced but expect it to be around US$32,000 or S$50,000, which is the retail price of the existing model in white gold with a silvered dial.