Though the new watch doesn’t look particularly interesting – the design is handsome but conventional – it combines a particularly logical set of complications that were conceived for exact setting of the time, namely a hacking tourbillon with zero-reset carriage (and not just the seconds hand), and a minute hand that is set in discrete, one-minute steps.

And to prove that chronometric competence, Glashütte Original also tests the Chronometer Tourbillon to the German chronometer standard, DIN 8319, laid out by the country’s all-encompassing federal standards body.

Testing takes place at the Sternwarte Glashütte, the town’s astronomical observatory, which was given a new lease of life by German watch retailer Wempe, which also has its own line of chronometer wristwatches. The process, however, is conducted by an independent, national body, Deutscher Kalibrierdienst (DKD), or German Calibration Service, and is open to any wristwatch made in Glashütte.

Though the test is performed according to criteria similar to that of Switzerland’s well-known COSC certification – 15 days with the watch in five positions and three different temperatures – the Glashütte observatory only certifies finished watches, and not just movements as COSC does. Though chronometer certifications in general are affections in modern luxury watches, the German chronometer certificate is still a useful and appealing bonus.

Big and quite shiny

At a glance, the Chronometer Tourbillon looks and feels like most other complicated Glashütte Original watches, which means it’s classical, serious-looking, and also quite large. But take a second look and the watch is actually far more interesting.

While its styling is conservative, the visible mechanics on the lower half of the dial give the watch depth and detail. At the same time, the mirror-polished inner surface of the bezel gives the watch a bit of extra shine. And it also allows for a minor gimmick: the polished inner surface reveals “Chronometer Tourbillon”, a reflection of the text engraved as a mirror image on the flanks of the sub-dial for the time.

Overall, the Chronometer Tourbillon has a good presence on the wrist – more so than the brand’s other complicated watches – thanks to its size and visual detail, though it’s a bit big. 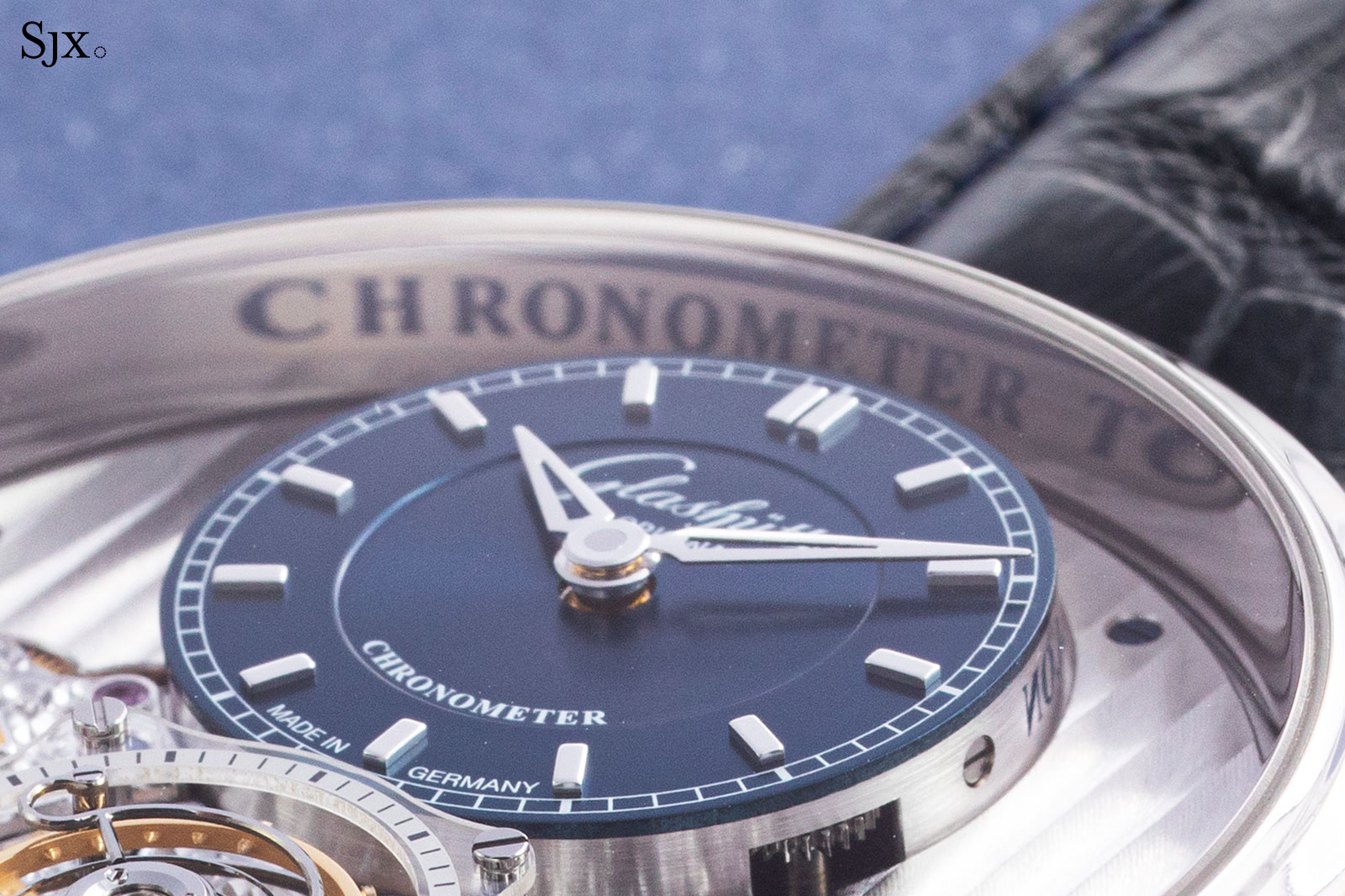 The visual gimmick in the mirror

Made of platinum and measuring 42 mm by 12 mm, the Chronometer Tourbillon is heavy in the hand. The weight is impressive and reassuring, and the case size is necessary as the movement is large. That said, the watch would have been a lot more wearable had it been just a bit smaller.

The case is simple in form but precisely executed, with sharply-defined lines and edges, especially on the lugs. A lengthwise bevel on each of the lugs give the case a bit of refinement though it is not fancy.

An extra bit of refinement comes from the case back, which is hand-engraved, something found only on the brand’s top-of-the-line, and usually limited edition, watches. 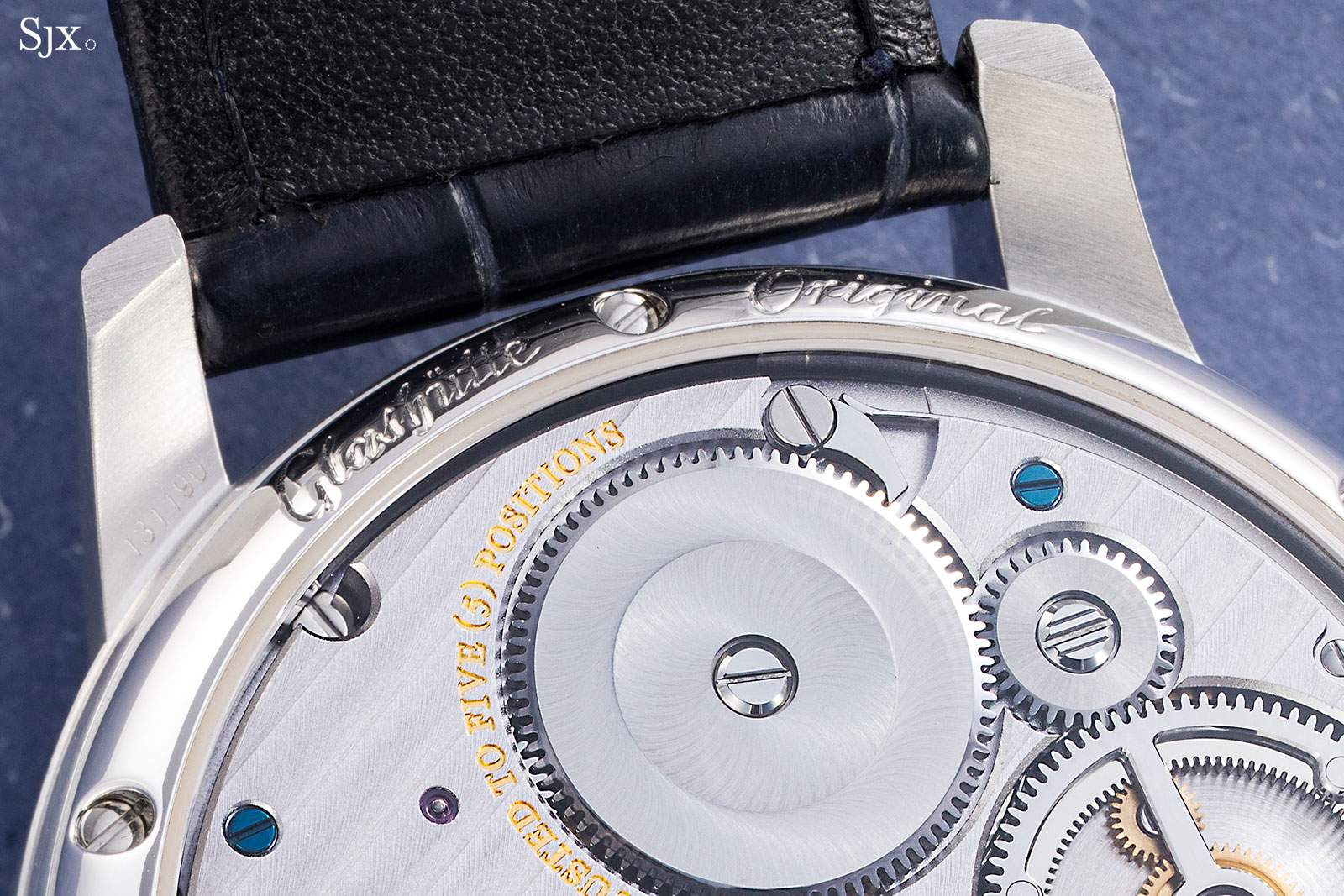 The face uses a formula that Glashütte Original has frequently used in the past for its tourbillon watches – dial bisected with the time in a sub-dial and the tourbillon directly below (or sometimes above).

It’s a straightforward layout and also unimaginative. But for the Chronometer Tourbillon it works well because of the execution. Specifically, the lower half of the dial reveals the fully-engraved main plate of the movement, along with the mechanisms for zero-reset and hacking of the tourbillon. Because of the striped plate on the upper half of the dial, the dial feels subtly abstract, as if the thin layer over the lower half was ripped off, revealing all of the mechanics.

The sub-dial for the time is plain but suits the style of the watch. More importantly, it’s done to a high standard. The recessed central portion is stamped with a notably fine concentric guilloche, with its printed text retaining sharp edges even up close.

All of the action is on the lower half of the dial. The tourbillon is in the centre, surrounded by a clear sapphire chapter ring with a printed 60-second track. The ring is a functional requirement because of the special time-setting mechanisms of the movement, so it has to be there in one form or another, though I would have preferred it done another way.

Of all the elements on the dial, the sapphire ring feels out of place, not because of quality, but because it’s a very modern element in a watch that is other traditional in design and execution. But because it’s clear sapphire set against an extreme intricate backdrop, it is not very obvious.

Getting that to happen is more complex than it sounds. To start with, a lever incorporated into the lower carriage of the tourbillon rises upwards to touch the balance wheel and stopping it, an action driven by a vertical clutch. 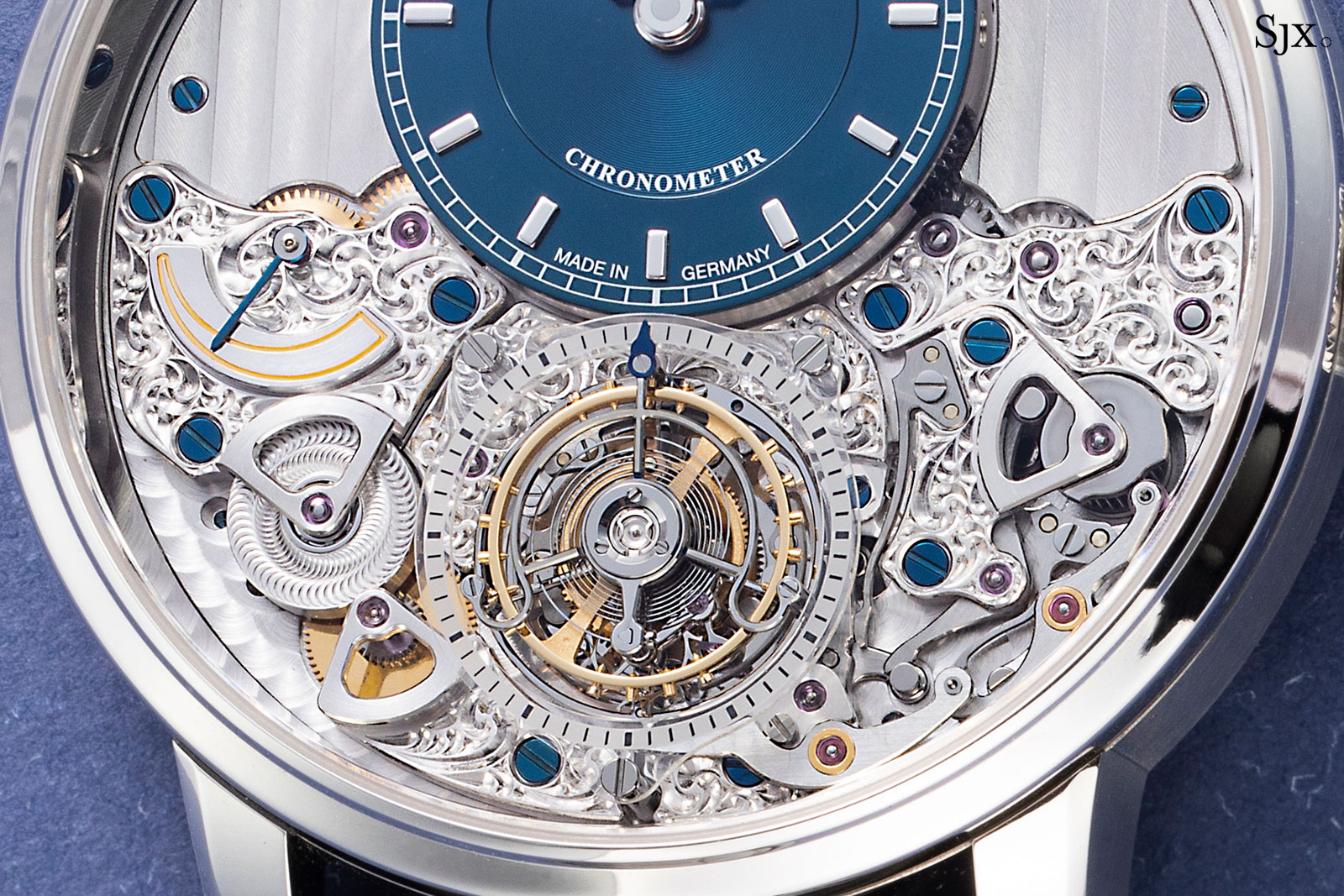 Though hacking tourbillons are not new, A. Lange & Söhne pioneered the concept, the Chronometer Tourbillon takes it to a whole new level. Here the entire tourbillon carriage stops and then swivels clockwise, and only clockwise, to zero. In contrast, a seemingly similar but entirely different feature in the Lange 1815 Tourbillon stops the carriage at its current position, while the seconds hand independently resets to zero.

The reset of the carriage is driven by the cam visible at four o’clock, which connects to a ruby roller at the end of a lever, both of which function according to the same principle that lies behind a chronograph reset mechanism. The roller travels along the edge perimeter of the cam until it passes one of the three peaks, after which it drops, rotating the tourbillon carriage, via a series of levers, to zero. 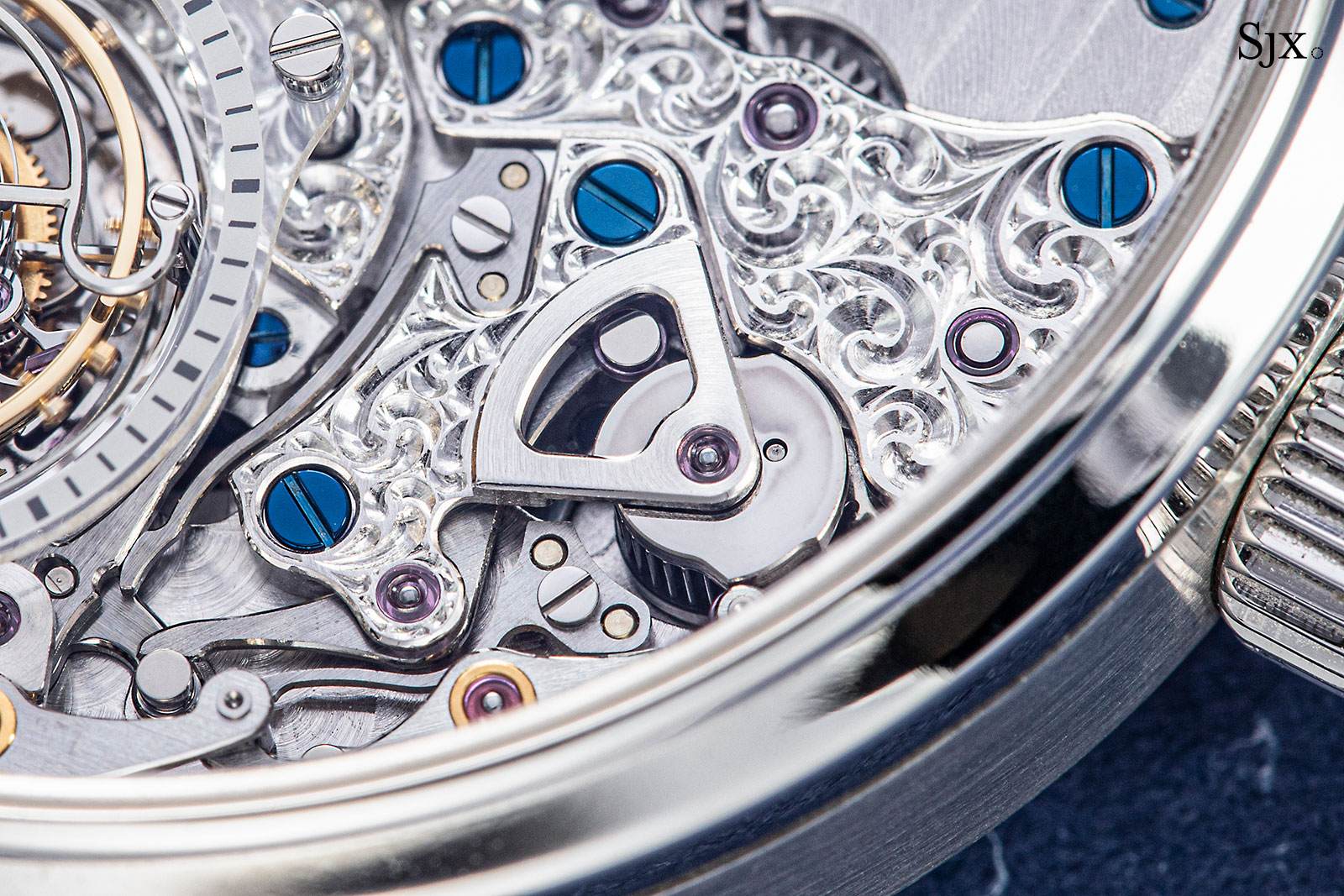 The zero-reset cam under the V-shaped bridge 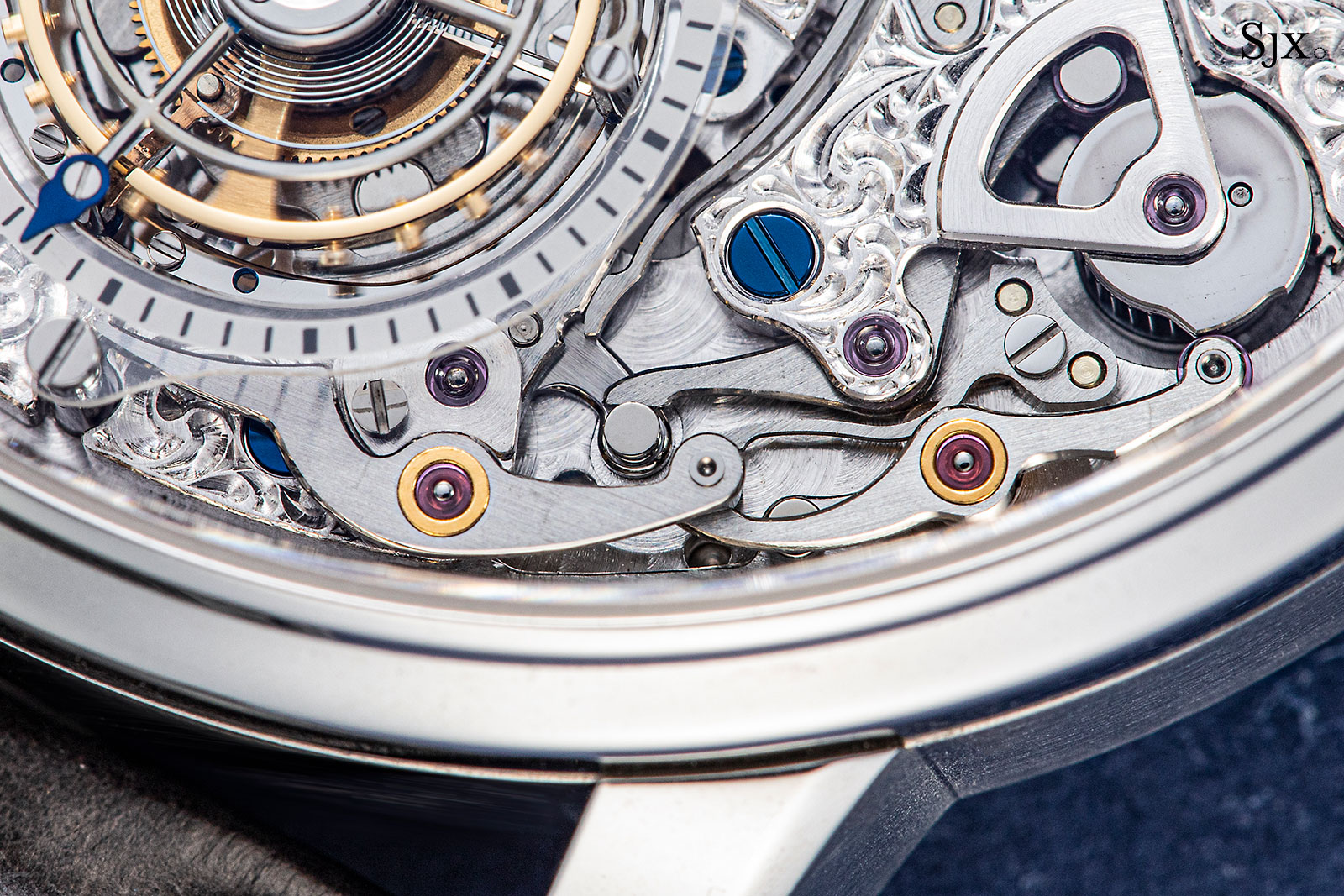 The mechanism for the zero-reset and hacking

At the same time, the zero-reset of the tourbillon is regulated by the rotational damper at seven o’clock. Essentially a weighted disc mounted on ball bearings that spins freely and rapidly, the damper begins spinning as the carriage swings back to zero, regulating the speed of the reset by releasing the excess energy of the action.

The rotational damper (centre), with the power reserve indicator to the left

From the back, the movement is less interesting, being mostly covered by large bridges. The highlight is the power reserve mechanism, which has its gilded planetary gears visible at nine o’clock.

These gears measure the state of wind of the mainspring via the rotation of the barrel ratchet wheel at 12 o’clock, reduces the ratio, and translates it into the power reserve display at nine o’clock on the dial.

The planetary gears that operate the power reserve indicator

The lower pivot for the tourbillon cage sits in a jewel within a gold chaton secured by three screws, itself in a steel collar; next to it is the black-polished cap for the centre wheel jewel

The movement decoration is good overall, with more refinement in certain details than the average Glashütte Original movement (which are generally well finished in their usual price segments). It should be noted that the watch pictured is a prototype, so the movement is unclean in places. Naturally, the final production watches will be spotless.

The cal. 58-05 in the Chronometer Tourbillon shows a mix of artisanal hand finishing and more workmanlike machine-applied decoration that’s illustrated with the varying types of bevelling found across the movement.

The slim arms of the tourbillon cage are black polished, with its edges doubtlessly bevelled by hand. On the other hand, the bridges for the visible parts on the dial are first bevelled by machine, and then hand finished to create the mirrored surface.  But over on the back, the bridges have bevels that are stamped and left as is, leaving behind a telltale granular surface.

Detail of the tourbillon

The polished steel cap for the centre wheel on the back, with the stamped bevels on the barrel bridge visible on each side

A couple of other details stand out.

All the blued screws, for instance, have chamfered slots and edges. And having visit Glashütte Original several years ago, I know that they are heat blued by hand, a handful at a time, on a soldering iron, rather than done in bulk in an oven or tub of boiling oil.

Another lovely detail is the planetary gears, which are larger than usual and circular grained, and covered by a black-polished carrier wheel with bevelled spokes. 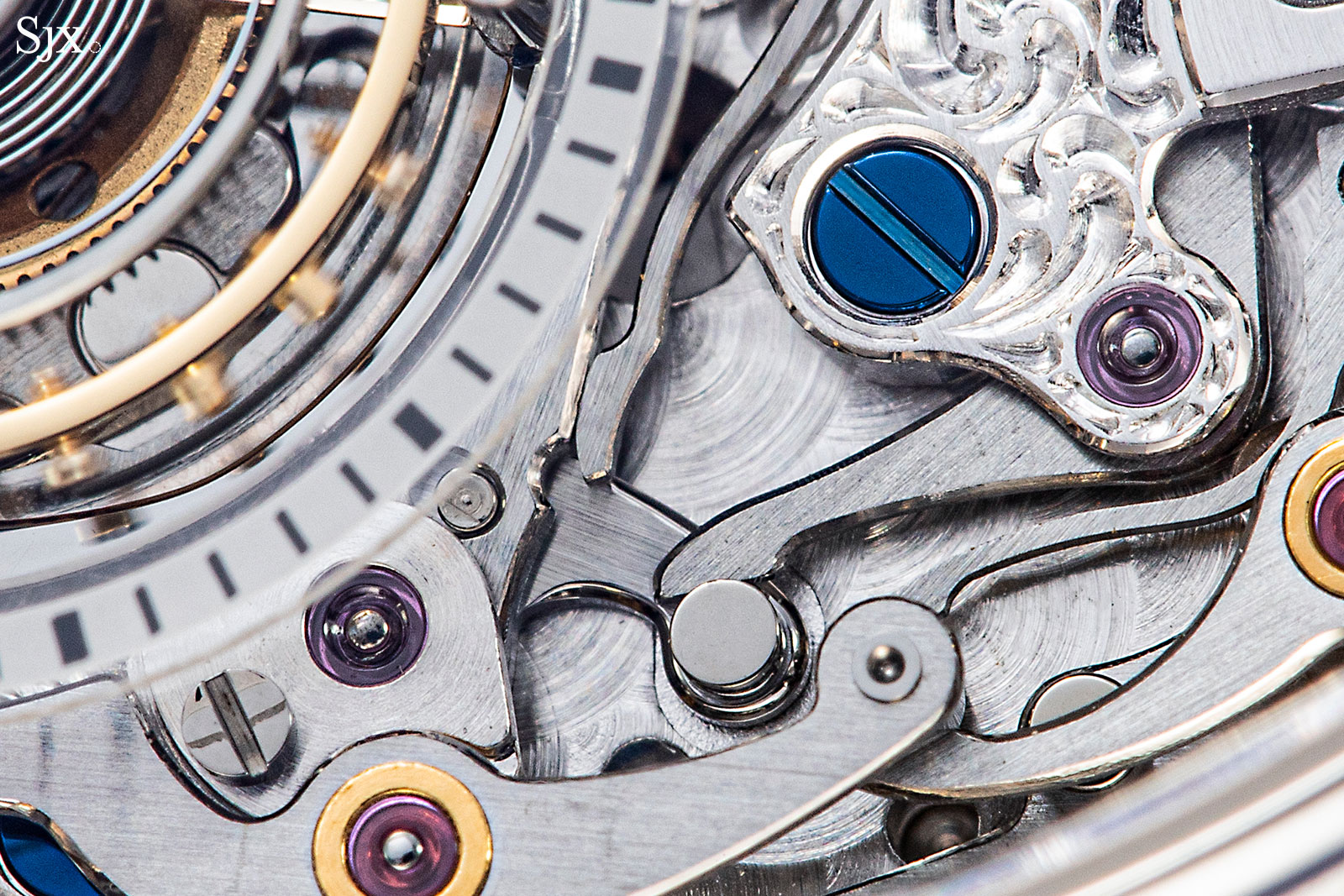 The levers for the zero-reset, which are all straight-grained and bevelled

The planetary gear for the power reserve

And it has to be pointed out that engraving of the lower half of the dial is excellent – consistent yet finely done. That is not much of a surprise, given that many Glashütte Original movements feature hand-engraved balance cocks, which means the brand’s engravers have a good deal of experience. 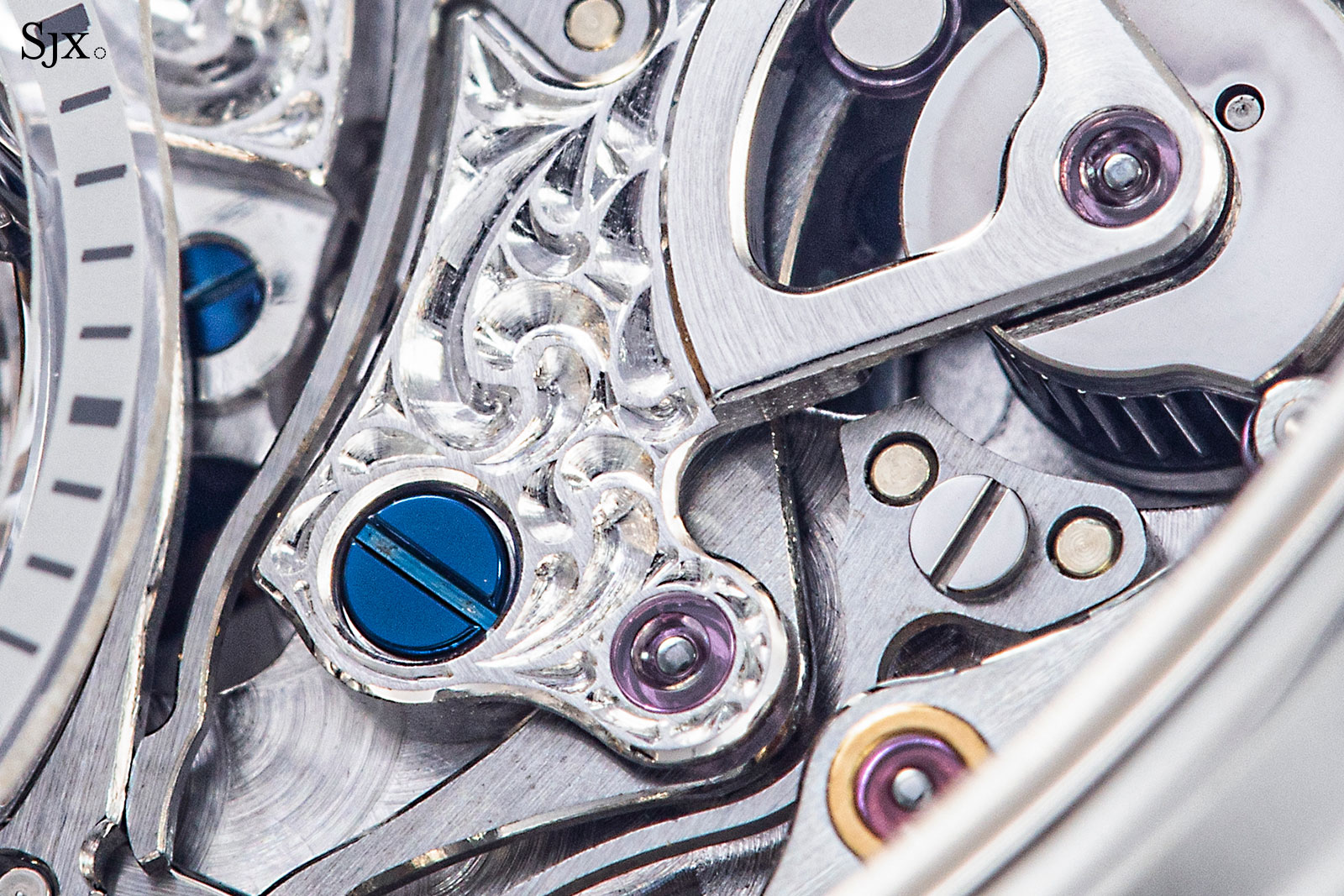 The Chronometer Tourbillon is a serious-minded watch combining complications that are pragmatic and useful, giving it a good degree of horological appeal. But the design is unimaginative, so the appeal is definitely more intellectual and technical than aesthetic.

At a bit over US$150,000, the Chronometer Tourbillon is also about 50% more expensive than a typical Glashütte Original tourbillon (or comparable tourbillon watches from Jaeger-LeCoultre).

While the Chronometer Tourbillon is definitely 50% more interesting and appealing than the brand’s other tourbillons (and also the comparable JLC tourbillons), the price is difficult to swallow, especially when the brand is largely focused on more affordable watches. The price is not so steep as to be unimaginable, but it sits just outside the value-proposition threshold, requiring much effort to justify.

At the same time, the price brings solid alternatives into view. It’s in the ballpark of the A. Lange & Söhne 1815 Tourbillon, a generally boring watch that’s the brand’s entry-level offering. Though it doesn’t have any notable technical features, the 1815 Tourbillon does have Lange’s truly excellent movement finishing.

In short, the Senator Chronometer Tourbillon gets everything right, but the price is steep.