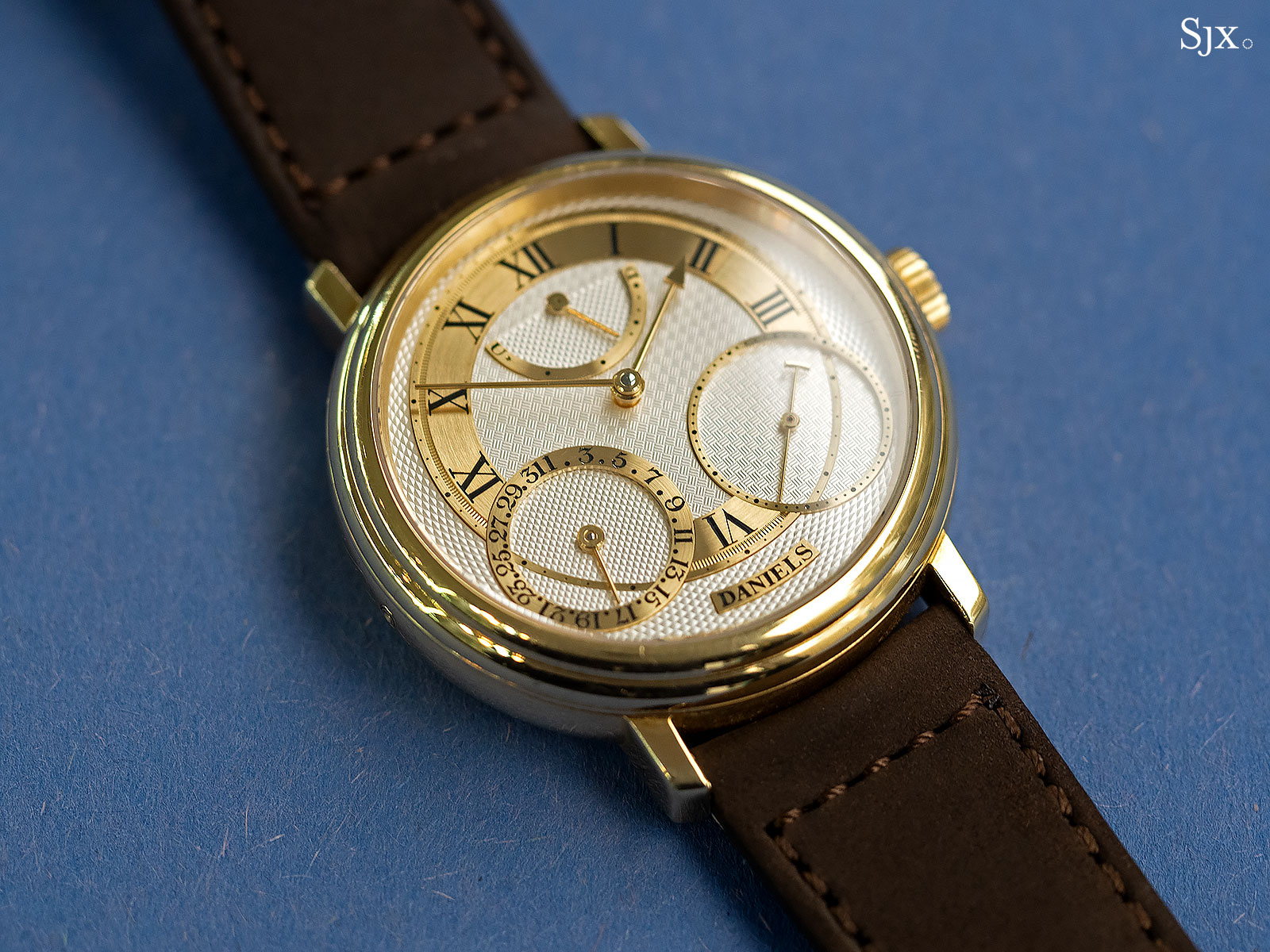 George Daniels spent almost all his career building just a handful of pocket watches, including the landmark Space Traveller and Grand Complication pocket watch, as well as two unique wristwatches, the “Compact Chronograph” and “Spring Case”– all entirely hand-made. He subsequently created the Millennium wristwatch, which was powered by an ETA-derived Omega movement, and then the Daniels Anniversary.

Daniels conceived the Anniversary watch in 2009 to mark the 35th anniversary of his invention of the co-axial escapement. The watch was then designed with the help of Roger Smith, then Daniels’ apprentice and now his successor. Though Mr Smith was responsible for the manufacturing of the watch – Daniels passed away shortly after the first prototype was finished – the Anniversary is the closest thing to a serially produced George Daniels wristwatch.

Being hand-made according to Daniels’ specifications, the Anniversary was delivered slowly over the next decade. Thirty-five Anniversary watches in gold were made, along with three in platinum and one in white gold with blued steel hands; the series was to have included four boxed sets of four watches each but the sets were never produced. Phillips will soon offer one of the yellow gold examples, numbered “24”, which is the watch pictured.

The Anniversary was inspired by two of Daniels’ earlier creations, the chronograph wristwatch of 1991 and the Four-Minute Tourbillon of 1994, and has an identical dial layout. In typical Daniels style, the dial is symmetrical and sensible, with the power reserve at 12 o’clock, while the date and seconds are in twin sub-dials just below. Though only 40mm in diameter, the Anniversary feels like a chunky watch, due to its height, accentuated by the tall, double-stepped bezel, and short lugs. Daniels’ wristwatch cases were always more straightforward and functional than his elegantly sculpted pocket watch cases, no doubt due to the fact that his focus was largely pocket watches. 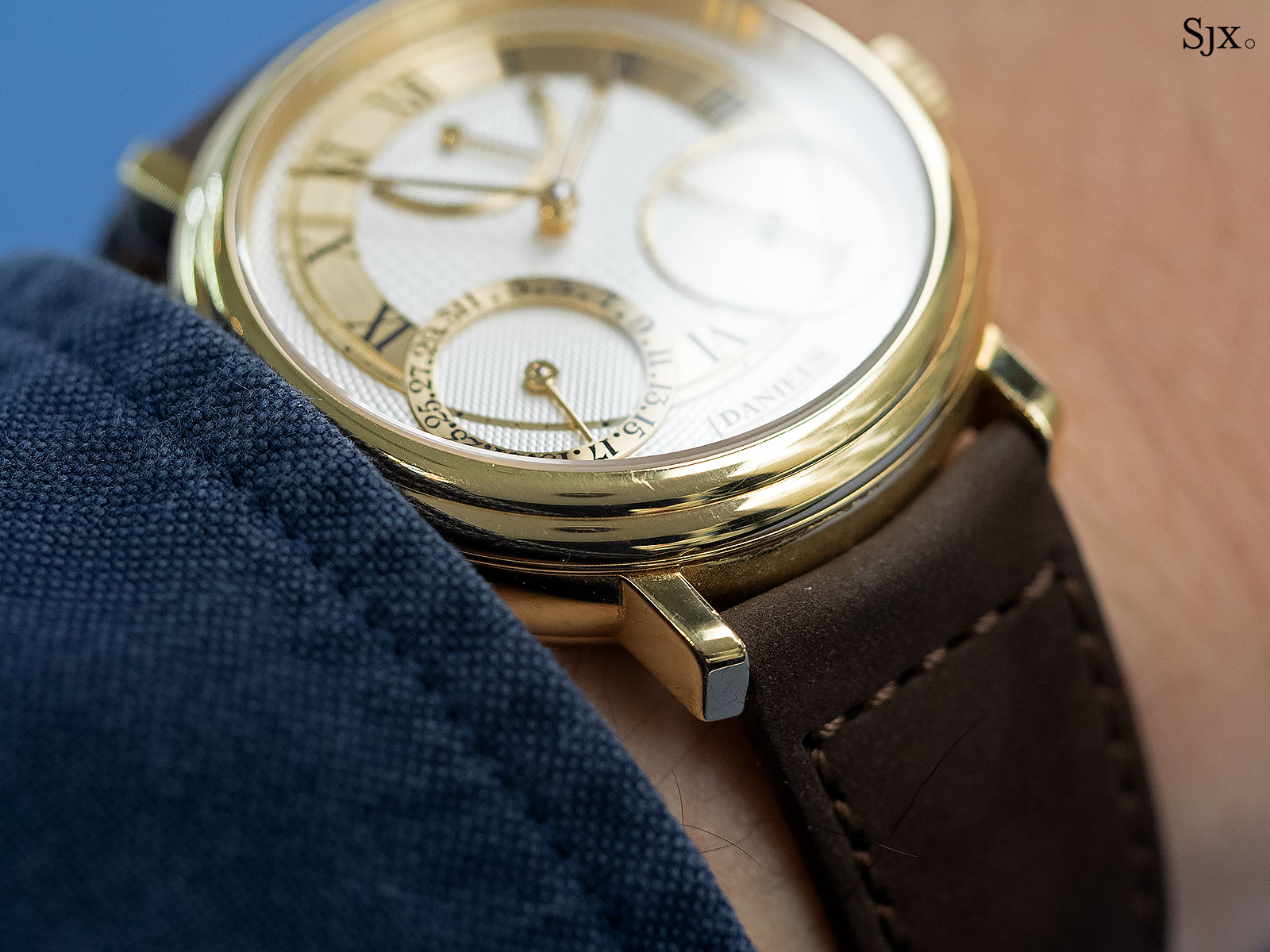 The London assay marks on the case back, led by Daniels’ own “GD” hallmark

The hand-wound movement inside was conceived by Daniels to do everything a basic timepiece should, namely show the time, date and power reserve. It is equipped with the improved, single wheel version of Daniels’ co-axial escapement that was devised by Mr Smith. 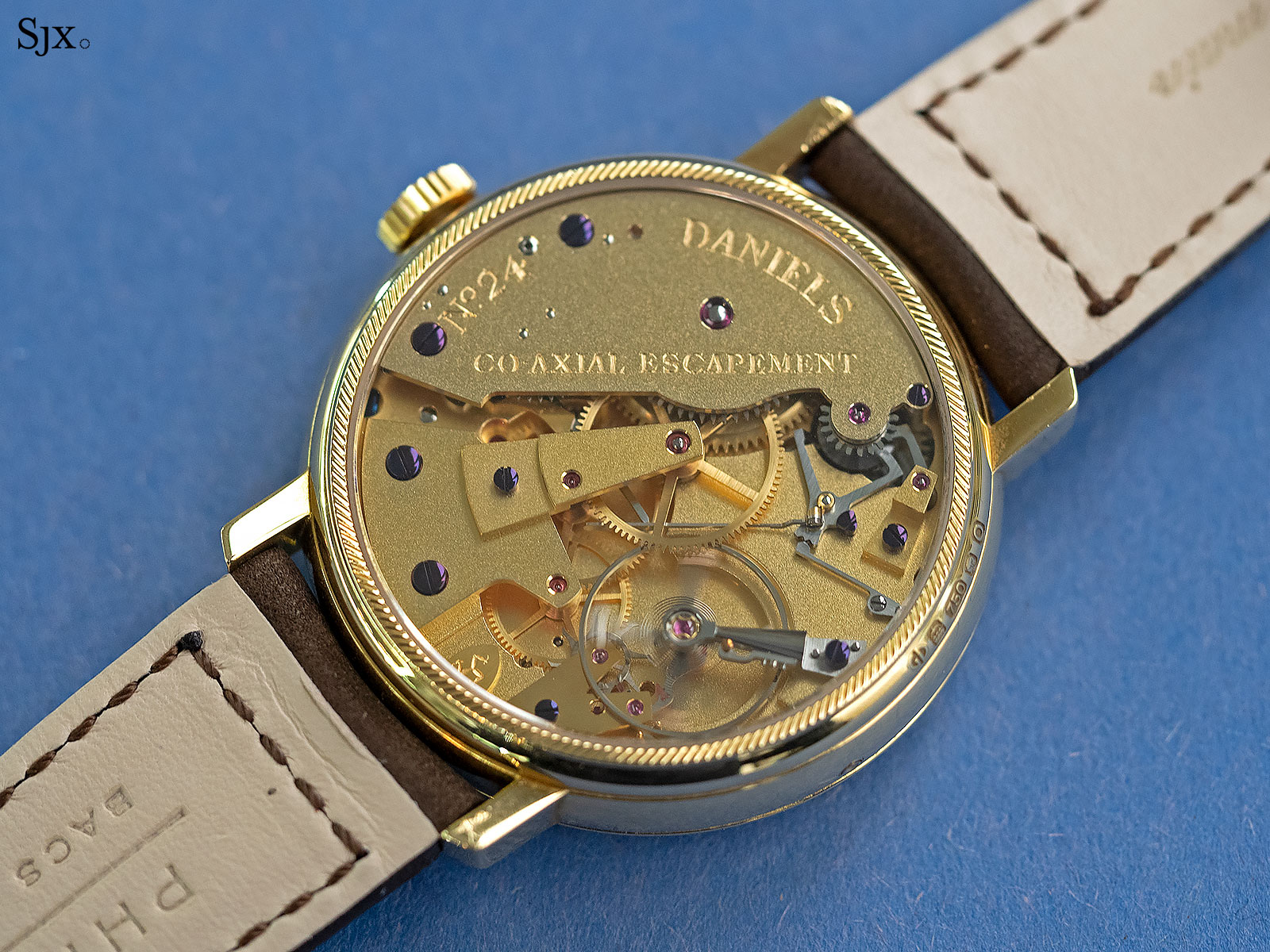 Made of solid silver with solid gold chapter rings and hands, the dial surface is finished with three types of guilloche to separate each sector. Although the individual components of the dial are tiny, they appear much more massive than typical dials, creating a feel of solid, tangible quality. 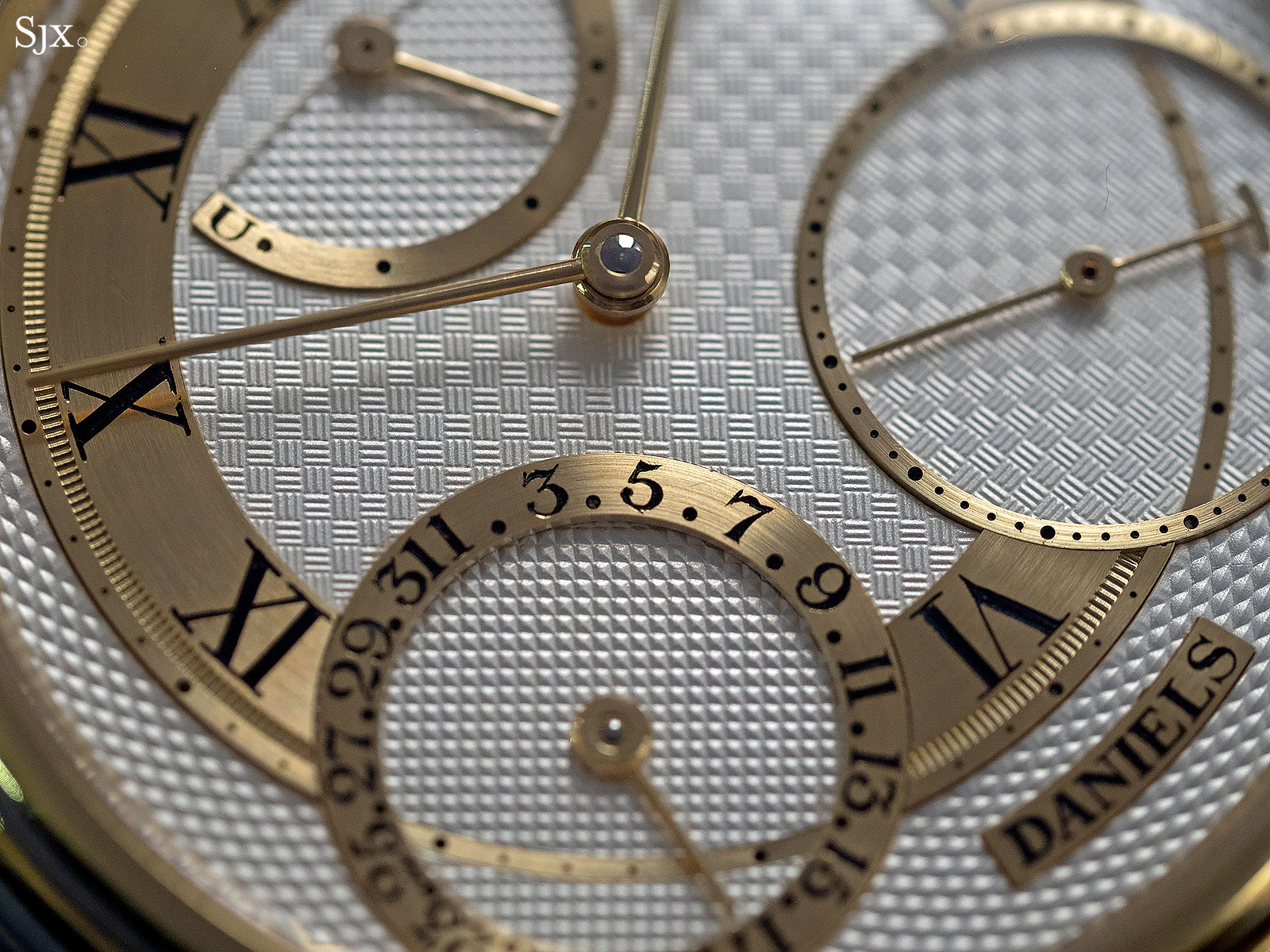 Notice the high gold chapter ring for the date, as well as the tall cannon pinion that carries the hands 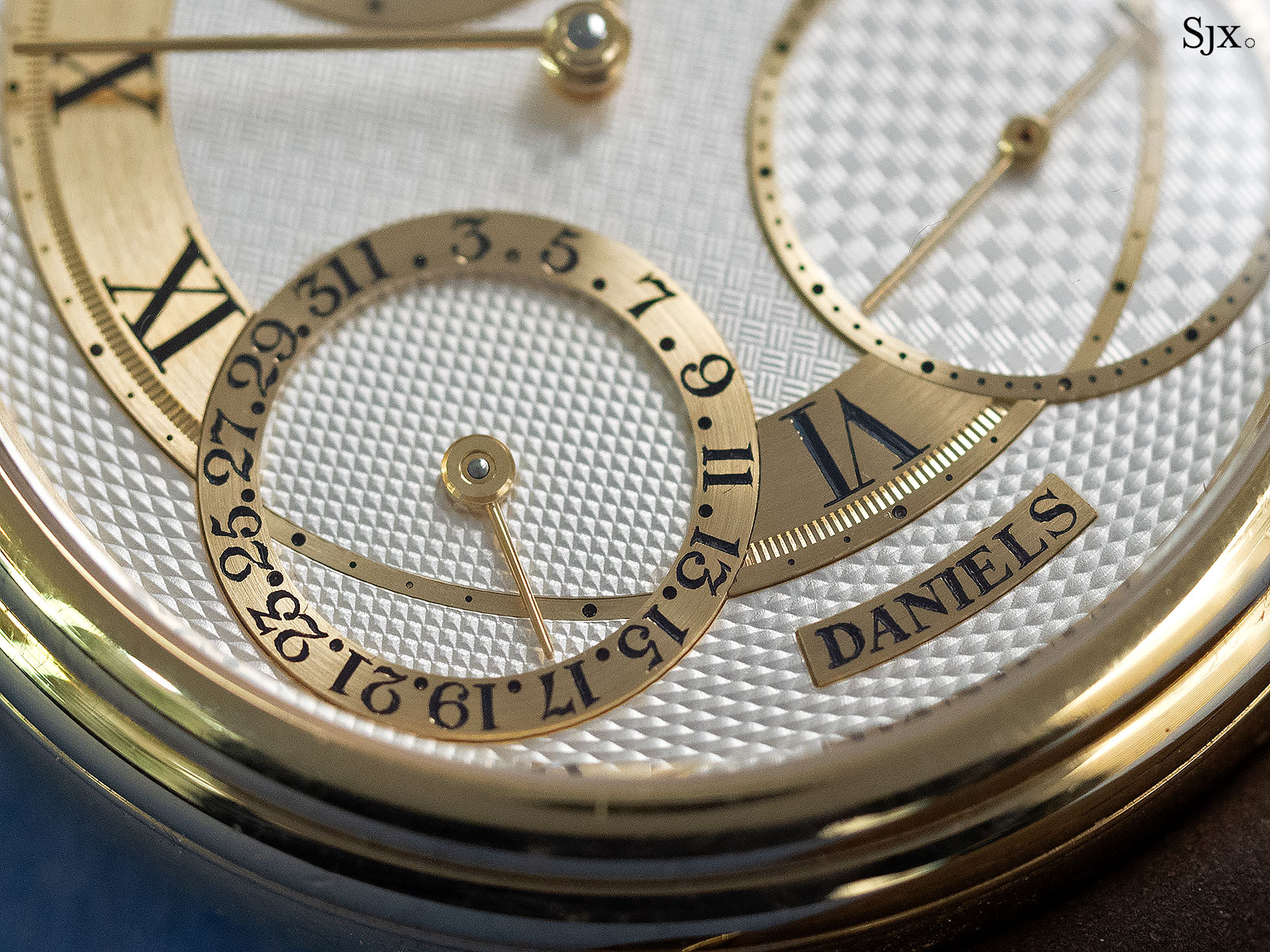 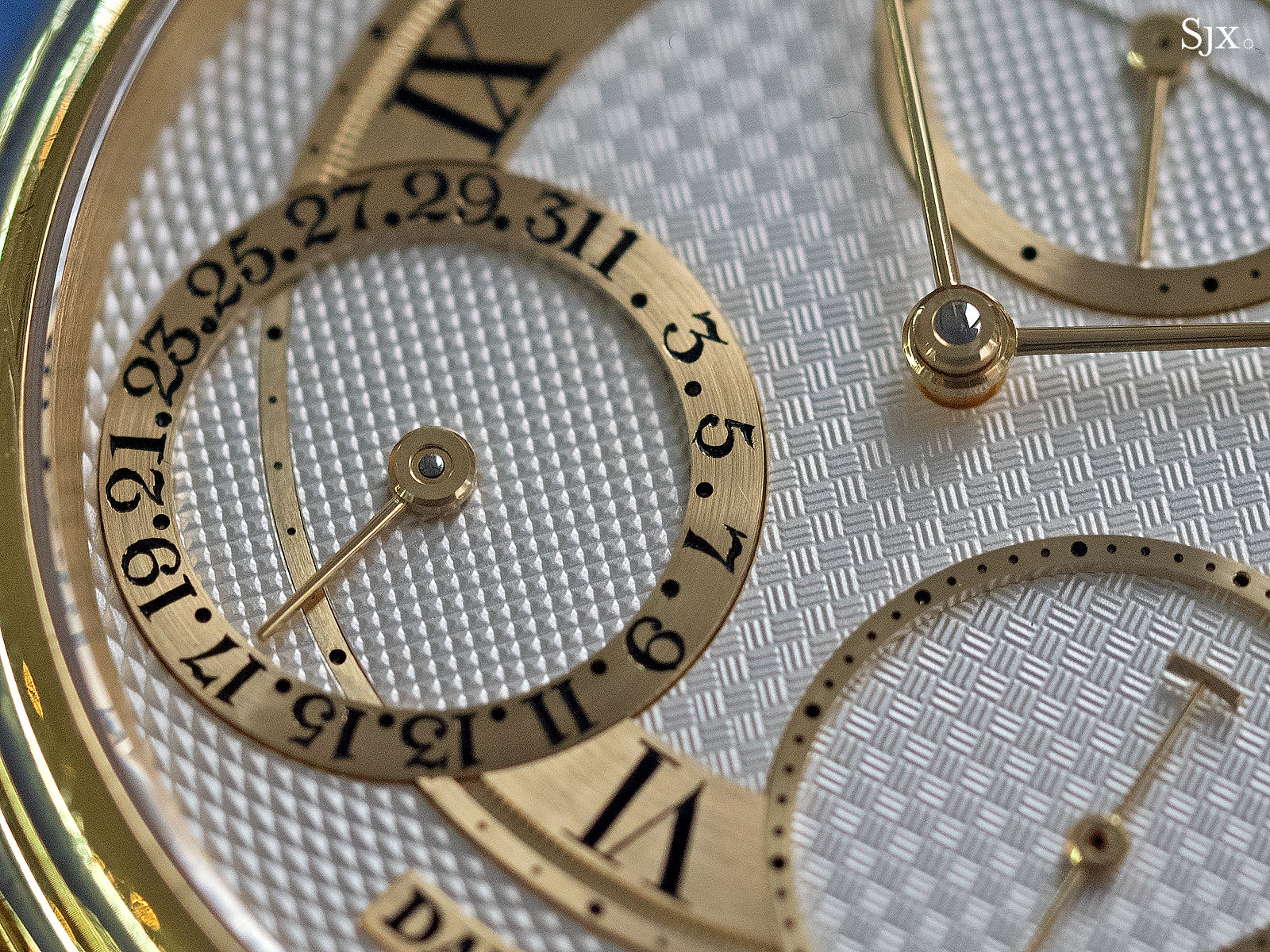 While the dial is free of the stray marks that characterise Daniels’ own hand-made watches, some elements are not as finely executed as on Daniels’ work. The hour hand on the Anniversary, for example, is a cylinder of equal diameter throughout. In contrast, the hour hands on Daniels’ two unique wristwatches taper very gently towards the tip. 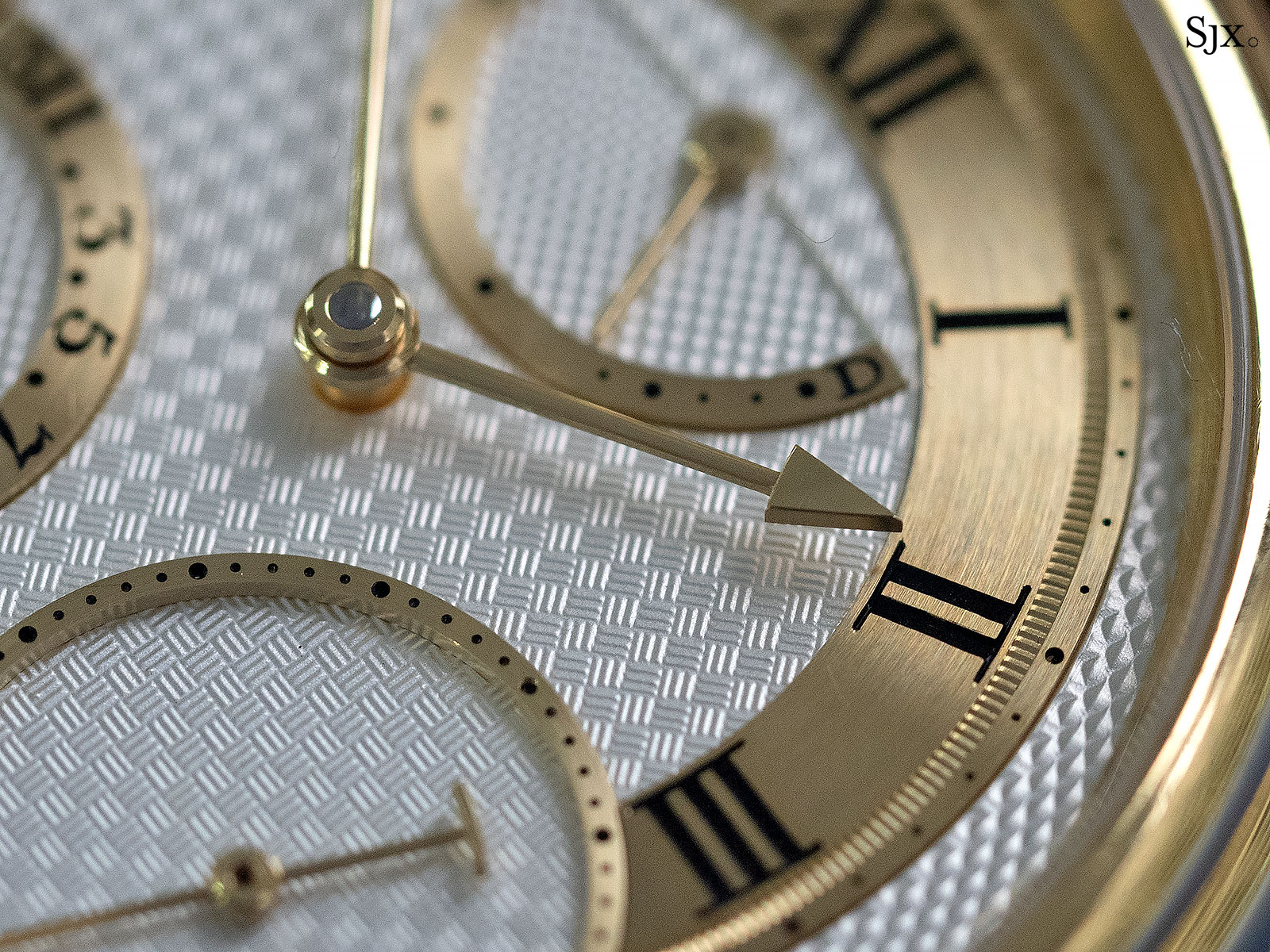 The Anniversary’s hour hand compared with… 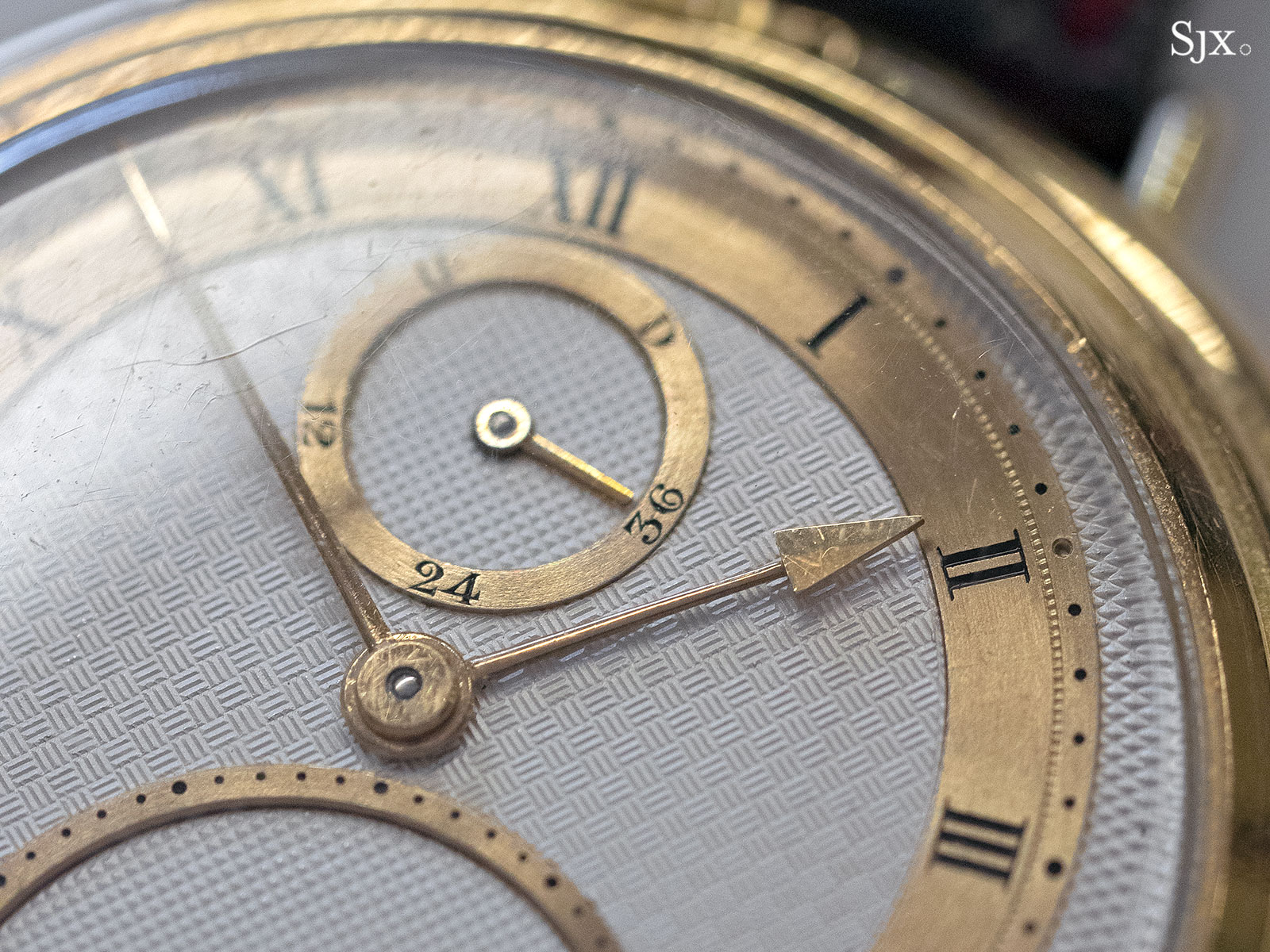 The hour hand on the Daniels “Spring Case”

Visually the movement is reminiscent of Mr Smith’s Series 2 calibre, with a notably similar layout, although the styling is totally different. 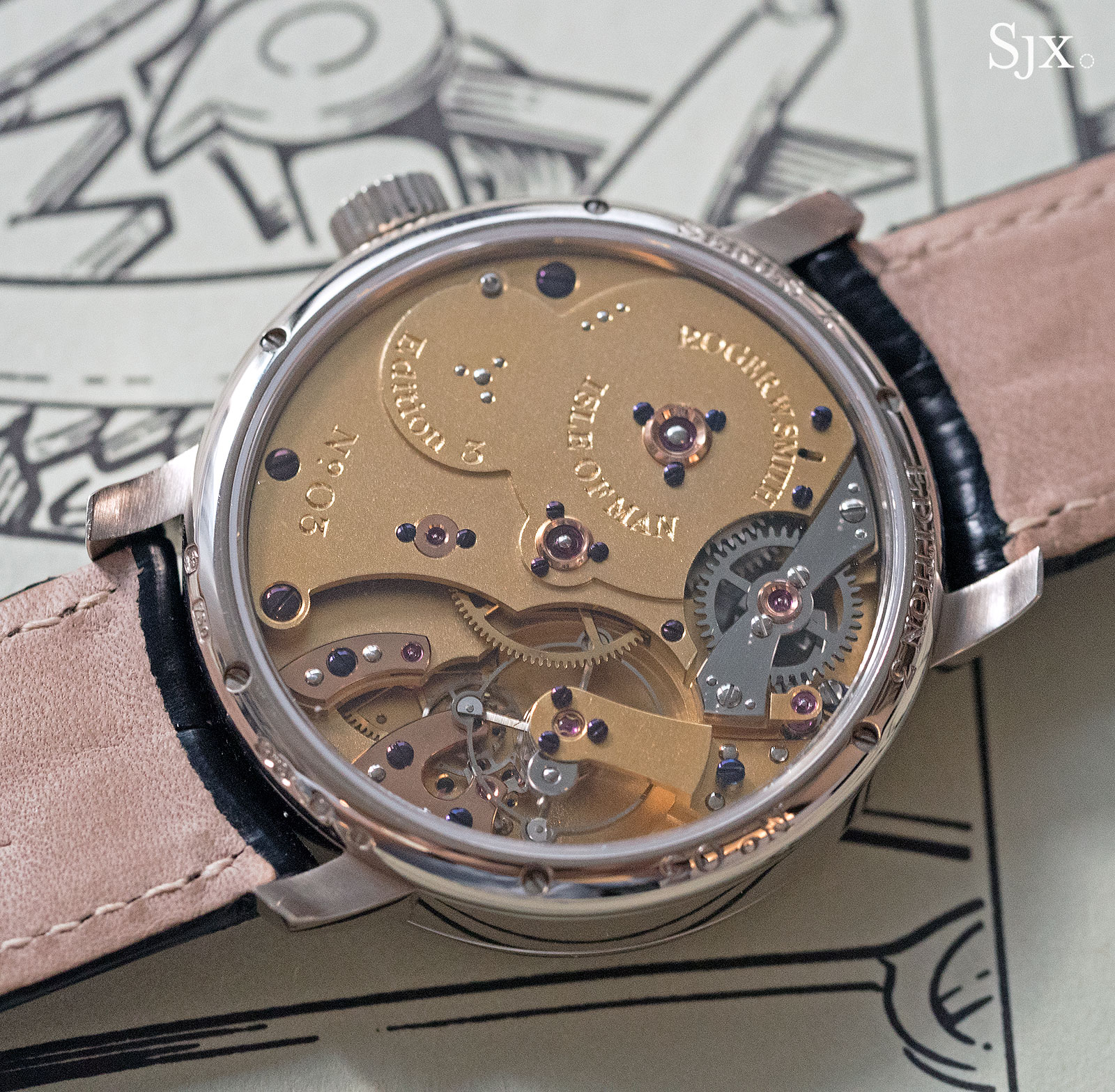 The Anniversary has more of its mechanics exposed because the barrel bridge is minimised, with a finger bridge holding the centre wheel, leaving the rest of the movement open. That shows off two specific details – the balance wheel and the hacking mechanism. 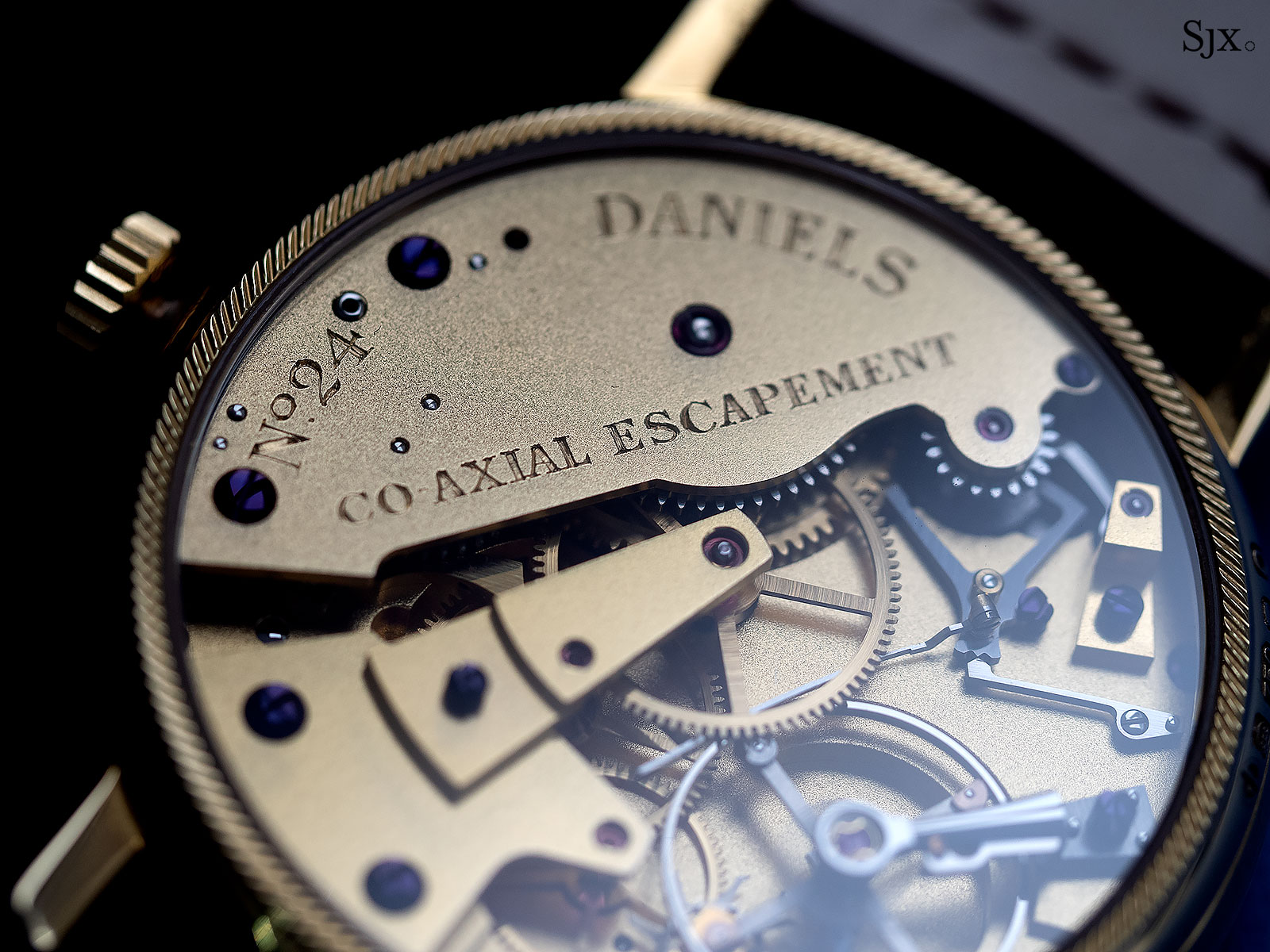 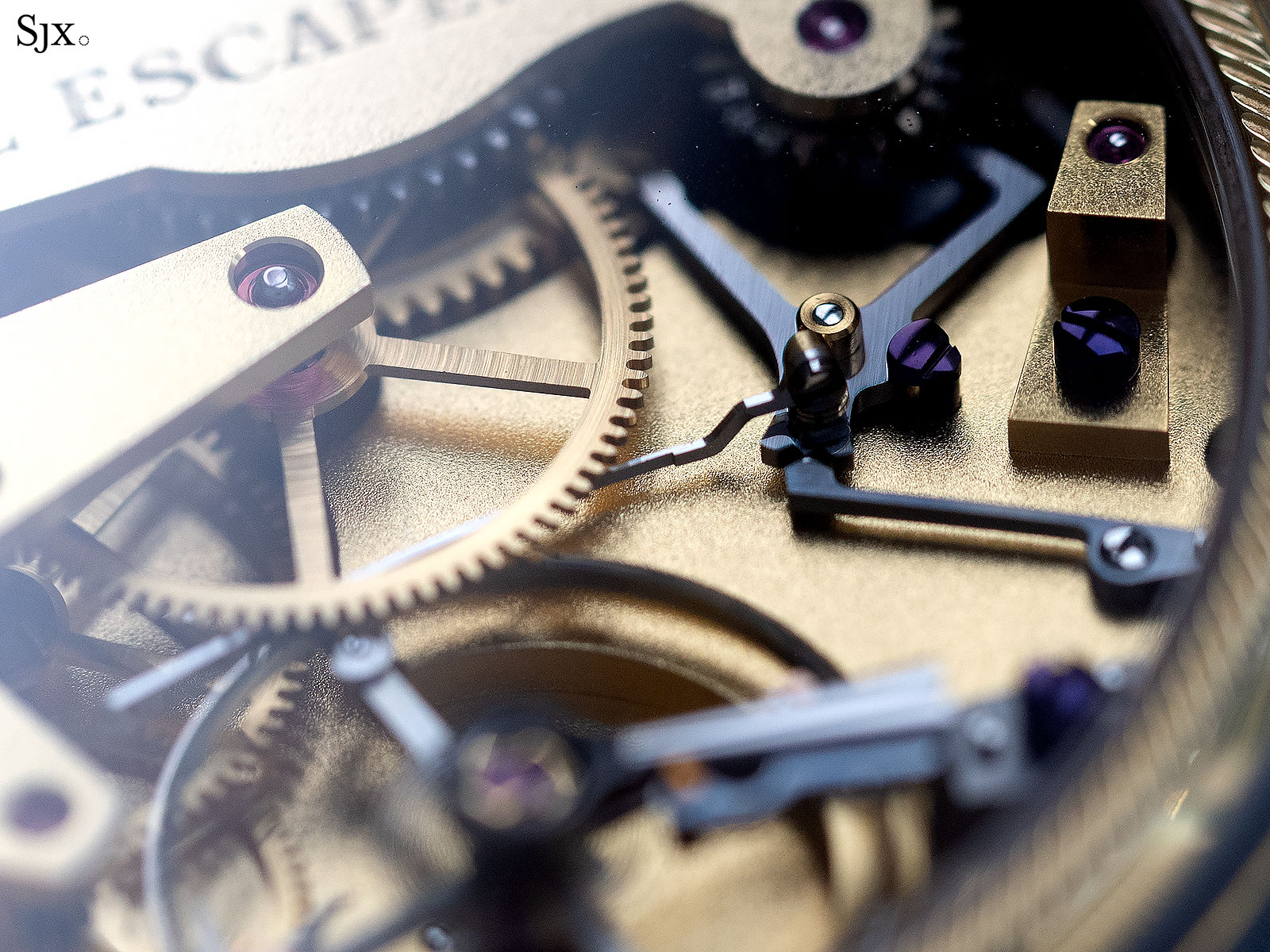 The hacking mechanism, with a long lever that touches the balance wheel when the crown is pulled for time-setting 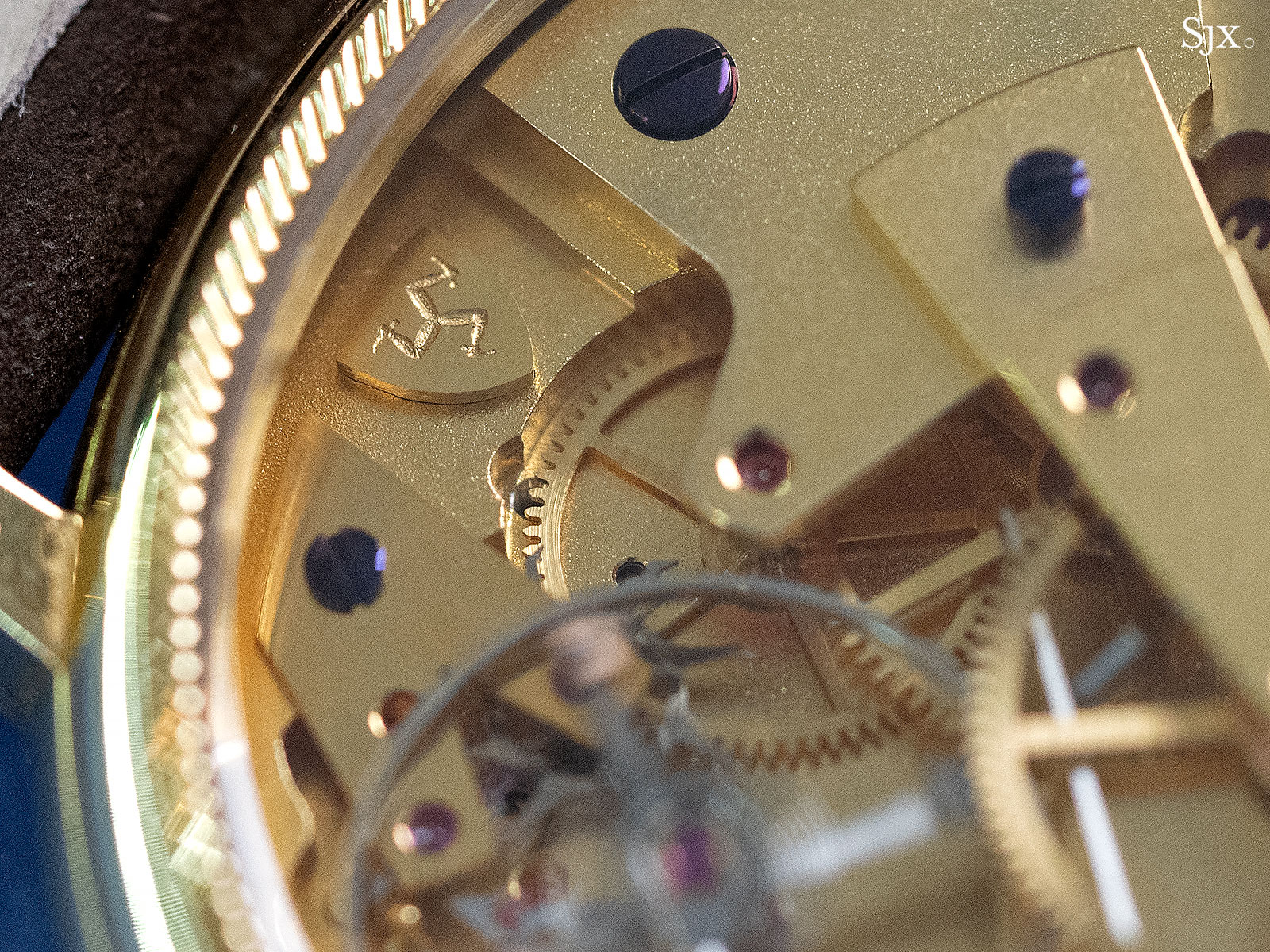 The balance is large, four-armed and fitted with four gold adjustable masses, but more interesting is what’s just below it – the single-wheel co-axial escapement. It is an improved version of the Daniels’ escapement, devised by Mr Smith.

While the original co-axial featured a two-piece escape wheel, with one wheel sitting over another, Mr Smith’s version is a single piece, lightening the escapement, thus improving its efficiency and performance. This is a later iteration of the single-wheel that is smaller and equipped with longer and narrower teeth, as compared to the first iteration of the single-wheel. The first generation single-wheel escapement, seen in a Roger Smith Series 2 from 2006

An arm and a leg

With George Daniels regarded as one of the greatest watchmakers of the 20th century, and his top of the line pocket watches selling for millions, the Anniversary is arguably a good buy, even at today’s hefty prices. That’s the near universal view of the market, explaining the strong prices for the Anniversary and the less complex Millennium. But there is another perspective – the Anniversary is more Roger Smith than George Daniels – which would dictate a Series 2 makes more sense, being a more refined watch at a lower price.

The Daniels Anniversary pictured is lot 32 in Phillips’ upcoming Geneva watch auction that takes place on May 11, and has an estimate of 180,000-360,000 Swiss francs.