George Daniels’ grand watchmaking career, from a technical perspective, can be divided into three eras. The first saw him produce pocket watches with a spring detent escapement (with the retrograde hours pocket watches being the best known), before he moved into the double wheel chronometer escapement inspired by Breguet’s échappement naturel, which culminated in the iconic Space Traveller’s watches, the second of which sold for US$4.32m at Sotheby’s in 2017.

The third era was the age of the lubrication-free co-axial escapement, his definitive invention. Now installed in hundred of thousands of Omega watches after Daniels sold the invention to the Swatch Group, Daniels himself only completed seven pocket watches with the co-axial escapement, along with one unfinished pocket watch movement, as well as two singular wristwatches, the “Spring Case” and the Compact Chronograph. The pinnacle of the co-axial era is appropriately the most complicated watch to ever contain the escapement – the Grand Complication.

Finished by Daniels in 1987 and never sold – like the second Space Traveller’s watch Daniels continued to use the watch until his death – the Grand Complication was last sold publicly at Sotheby’s in 2012 for £914,850, or just over US$1.46m. And now it is available once again, being offered at Phillips’ upcoming Geneva watch auction that takes place in May, straight from an eminent collector of Daniels timepieces. Heavy for the pocket but a treat for the eyes

Like nearly all important complicated pocket watches, the Grand Complication is a massive timepiece, so big it feels almost like a precious object rather than a mechanical tool. The yellow gold case is 61mm in diameter, and well over 20mm thick.

Everything about the watch, from the mass of case, to the thickness of the dial (which is solid silver and gold), to the bridges of the movement, speak towards a construction made to last forever. 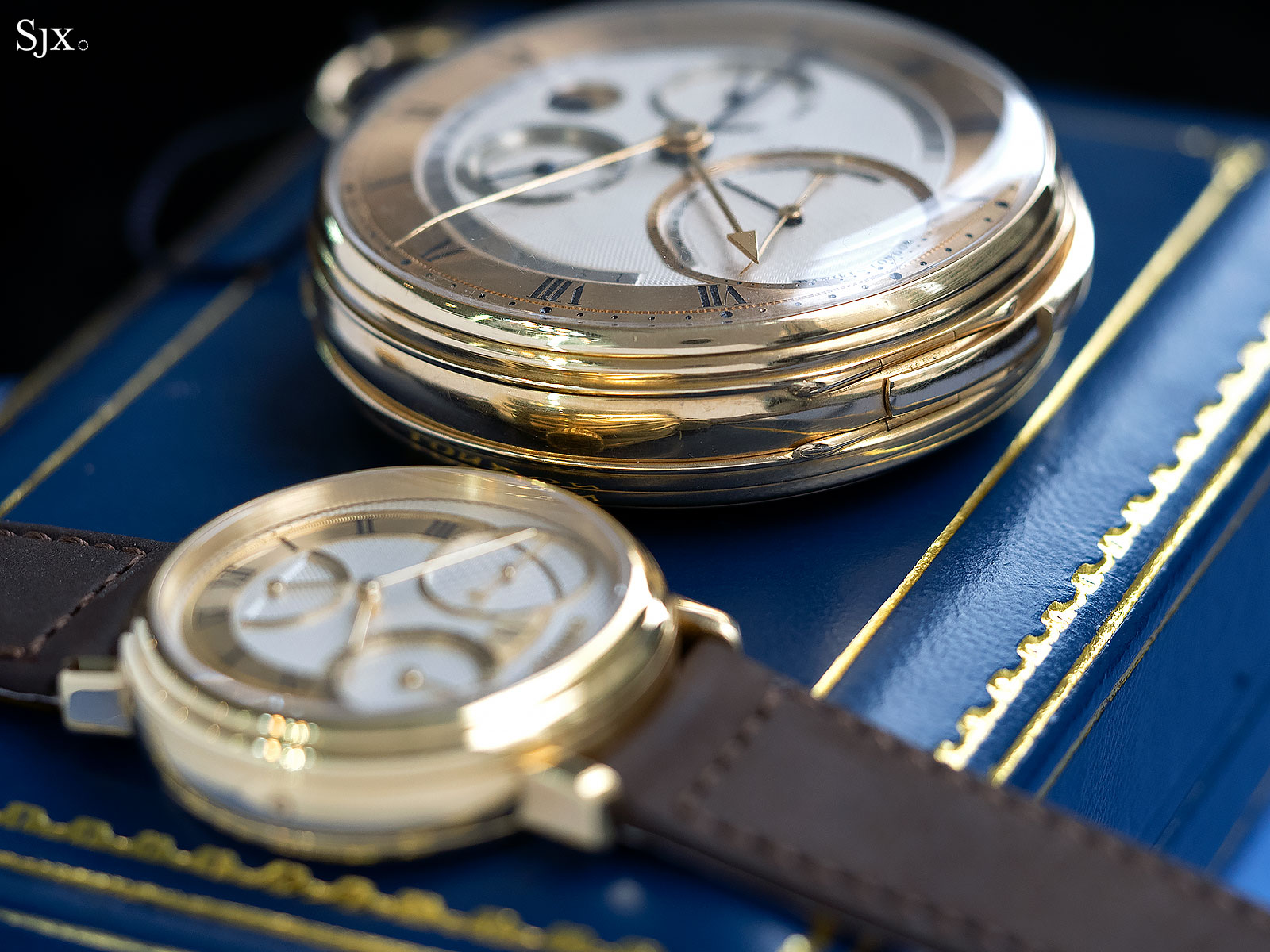 The Grand Complication next to a Daniels Anniversary wristwatch 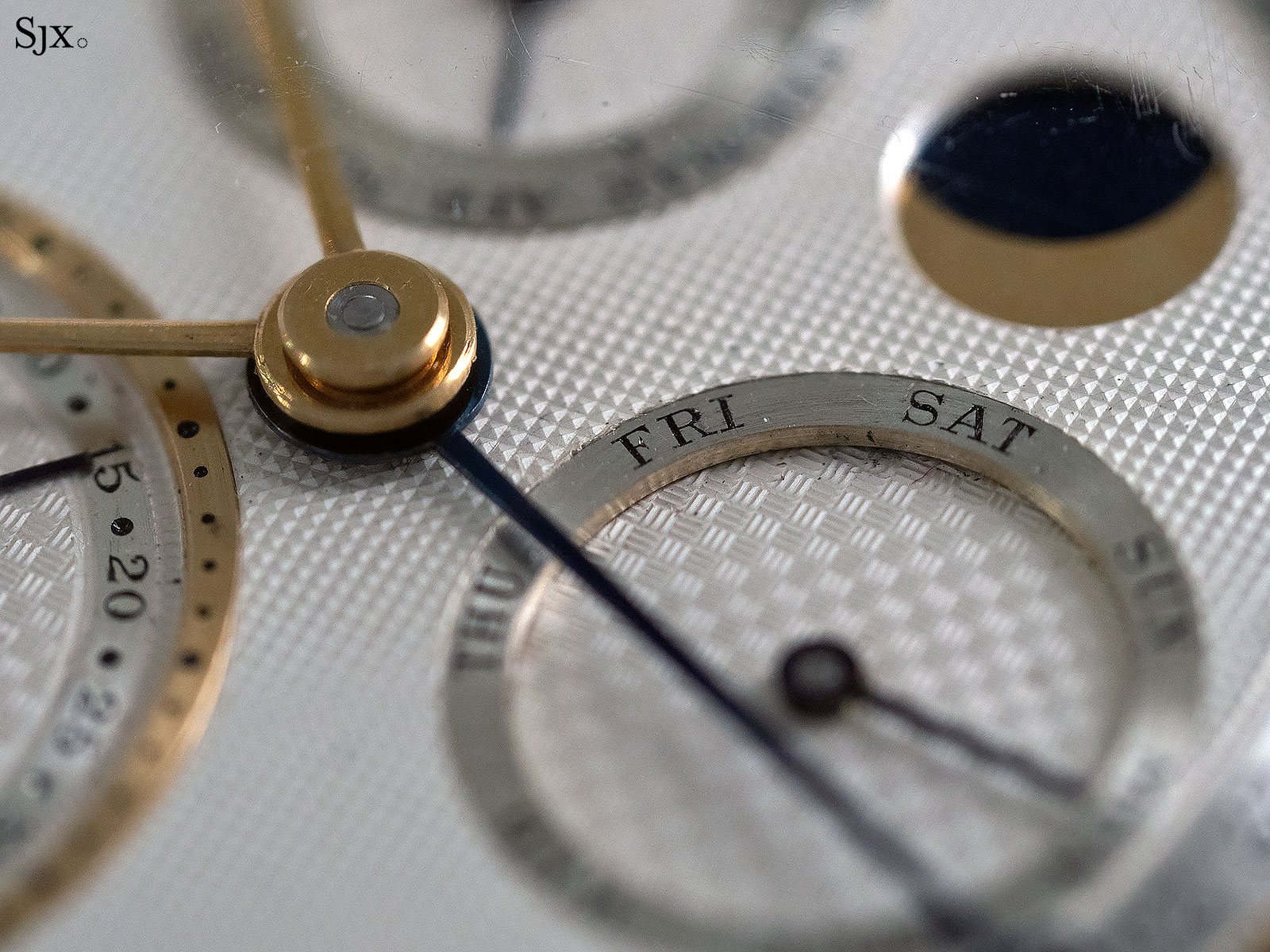 The dial is solid silver, with inset silver and gold chapter rings Visually the Grand Complication is distinct from the typical Daniels’ style, because the main dial is centred, with the gilded chapter ring sitting on the periphery of the dial.

In contrast, most of Daniels’ watches, both wrist- and pocket watches, are characterised by one or more eccentric sub-dials. Even the very simplest timepiece made by Daniels, the Millennium, has an off-centre sub-dial for the time. But in typical Daniels style the watch is sensibly and legibly designed, right down to the colours of the hands. The hands for the time are made of solid yellow gold, while those for the calendar are blued steel. The layout is straightforward and functional, on both the front and back. While modern day double-face watches usually have full-size dials on the reverse, the Grand Complication makes do with a small but functional aperture. The aperture reveals the equation of time, power reserve and annual calendar ring

In its details the watch is quintessential Daniels – refined while showing enough inconsistencies to reveal that it was truly hand-made. Everything on the dial (and the chapter rings on the back) is hand-engraved, and then filled with black lacquer. 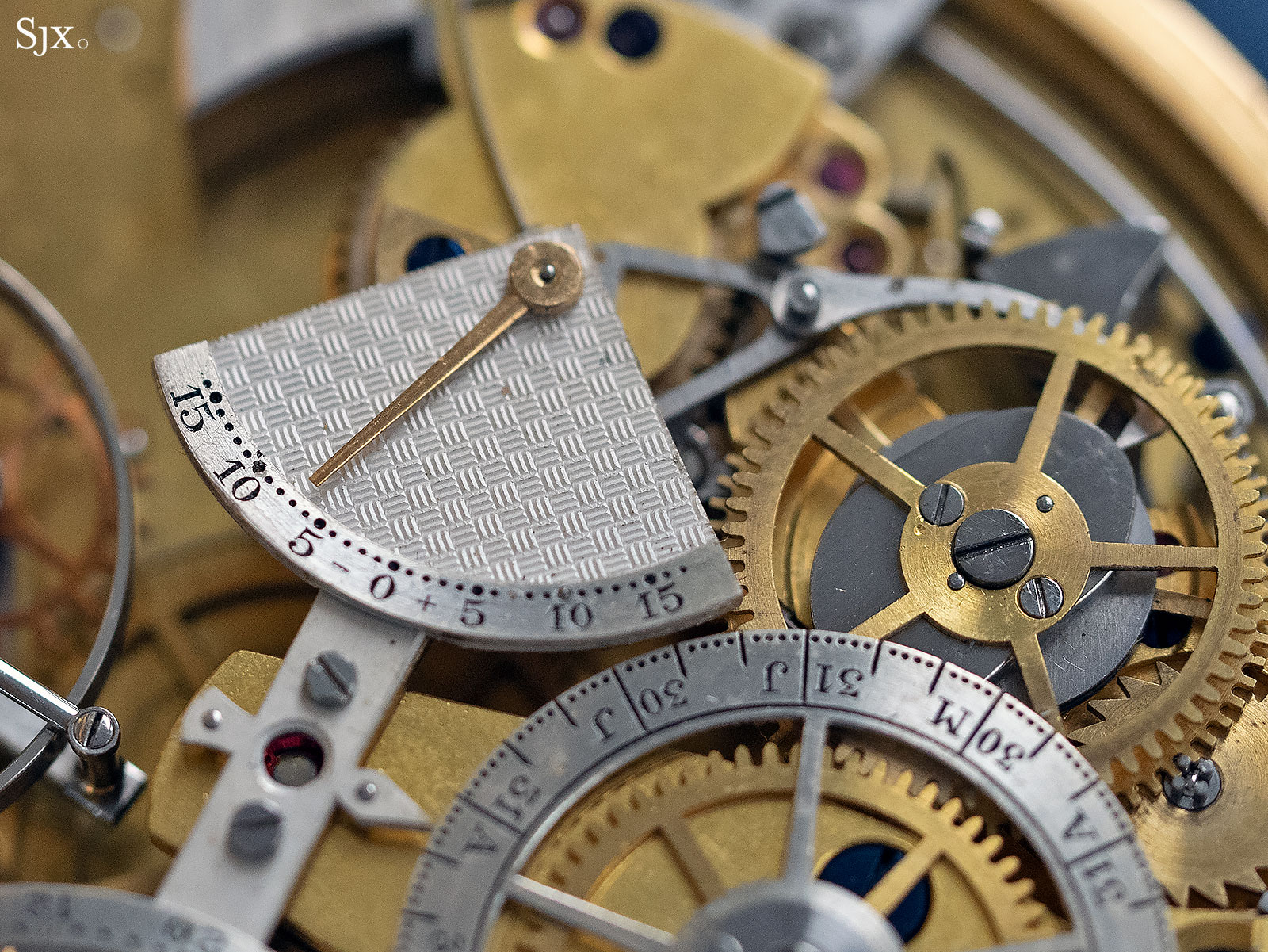 The Grand Complication has an instantaneous perpetual calendar with retrograde date, leap year and moon phase. More unusually it has a thermometer indicated within the seconds sub-dial at six o’clock. As with the thermometers incorporated into original Breguet pocket watches, this relies on a bimetallic spiral that expands and contracts with the temperature. The thermometer scale runs from 5 to 35 in degrees Celsius

And that’s just the front of the watch. Lift the case back and the watch also reveals itself to be a minute repeater, with two sets of hammers and gongs, as well as a tourbillon. The annual calendar ring (left), and equation of time on a fan-shape display The tourbillon is of the one-minute variety with a polished steel carriage held in place by a polished steel balance cock. Within is a three-arm balance with gold adjusting weights and a “slim co-axial” escapement. Lastly, the Grand Complication features Daniels’ own keyless (and crown-less) winding, with the bow of the watch doubling up as the crown for winding and setting.

Notably, this watch is exactly as it was when it was in Daniels’ possession, having never been serviced or worked on since then. In his autobiography, All in Good Time – Reflections of a Watchmaker, Daniels repeatedly points out the longevity of his co-axial escapement and how it is able to keep good time over many years longer than the Swiss lever escapement. The Grand Complication proves that nicely.

It does show some lint and grime accumulated over the years, but everything functions as it should, including the repeating mechanism, which strikes loudly and strongly. The same auction also includes a Daniels Anniversary as lot 32

The George Daniels Grand Complication is lot 34 in The Geneva Watch Auction: Nine that takes place on May 11, 2019, and has an estimate of over 1.5m Swiss francs. The full catalogue can be found here.