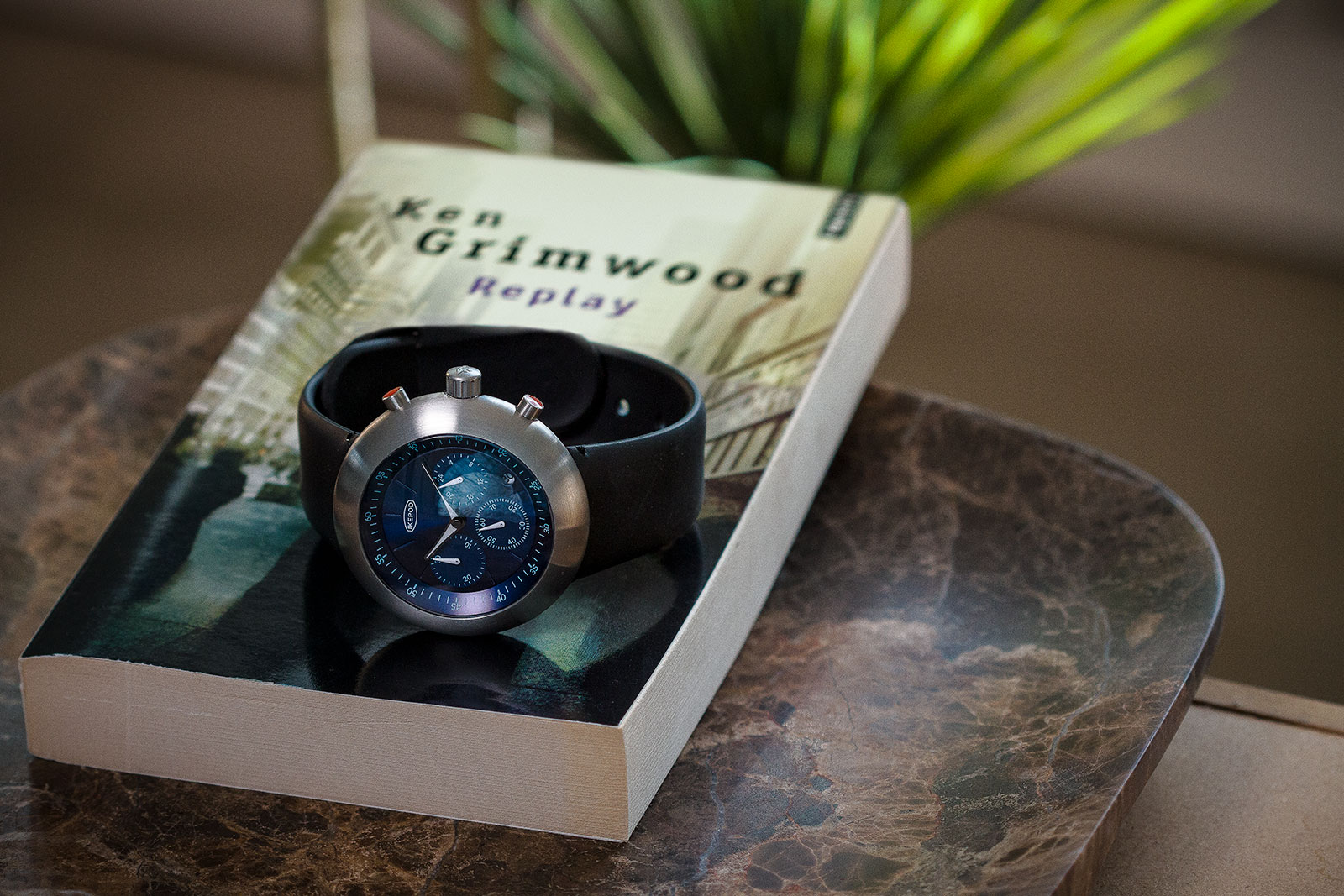 After going bust six years ago, for the second time, Ikepod is back from the dead, now with the same styling but a wholly different strategy and price. The new Ikepod watches are crowdfunded, and start at just over US$500.

But first, a bit of history…

Ikepod’s second resurrection is taking place almost a quarter of a century after the brand was first founded in 1994, set up by industrial designer Marc Newson and Swiss businessman Oliver Ike. The company name was derived from Mr Ike’s last name and the pod-like design of the watches, most of which had model names ending in “-pod”.

The brand gained cult status for its curvaceous, futuristic designs, helped also by Mr Newson’s name recognition. But appeal as they did to fans of good design, the watches remained a niche product, hindered also by their price. The company went under just after the turn of the century.

The brand was launched once again in 2008, once again as a luxury brand, led by Mr Newson and backed by art collector and dealer Adam Lindemann (whose father happened to be a contact lens and cable television billionaire).

Egged on by Mr Newson’s ambition, the watches were expensive creations, even more expensive than in Ikepod’s first incarnation. They were mostly in precious metals, and beautifully finished objects on and off the wrist. And thanks to Mr Lindemann’s connections, there were even collaborations with noted contemporary artists like Jeff Koons and Kaws. But it was almost inevitable and Ikepod folded for the second time in 2012.

The Second Coming of Ikepod

Last year, a trio of investors led by majority stakeholder Christian-Louis Col, a Swiss natural with a diverse experience in luxury goods, acquired Ikepod with a clear vision and a sensible strategy of bold design and affordable prices. In Newson’s place is Emmanuel Gueit, the watch designer responsible for penning the Audemars Piguet Royal Oak Offshore and the Rolex Cellini. While the original Ikepod design elements have been kept intact, the watches have shed the “Swiss made” label. They are instead produced in Hong Kong with Miyota quartz movements (made by Citizen of Japan in China).

And while the case design remains the same, their construction is different. The original Hemipod cases were one-piece, with the dial and movement being removed from the front of the case with a special tool. The new watches, however, are conventionally built, with a removable case back to access the movement. The crown of the new models feature the original Ikepod logo of a Hemipode, a species of bird that includes the quail

Leading the charge are the time-only Duopod and the Chronopod chronograph. They are each available in a variety of dial colours and finishes, including the trademark dimpled surface conceived to create an optical illusion of volume. The dimple dial was premiered on the Ikepod Horizon which was the flagship model during Mr Lindemann’s ownership. Crucially, both models are fitted to a silicone, pin buckle strap modelled on that found on the first generation Ikepod watches. The second generation Ikepod watches, in contrast, featured the cleverly designed, pin-button buckle strap Mr Newson originally designed for Ikepod and then installed on the Apple Watch. But the new watches are made to fit any of the older Ikepod straps.

The Duopod has a stainless steel case in the original, elliptical Ikepod shape. It measures 42mm in diameter but wears smaller due to the lack of external lugs. Inside is a quartz, two-hand Miyota movement. The Chronopod is a three-register chronograph with a 44mm steel case that’s similarly styled and more compact than it looks. It’s powered by a Miyota JS 25 chronograph movement. Neither model features a running seconds hand so there are no outward signs of the quartz movement inside. There are, however, automatic models planned for late 2019 according to Ikepod.

Up Close With The Glass Timekeepers Of Design Legend Marc Newson

Marc Newson's genius is most apparent in his glass timekeepers. 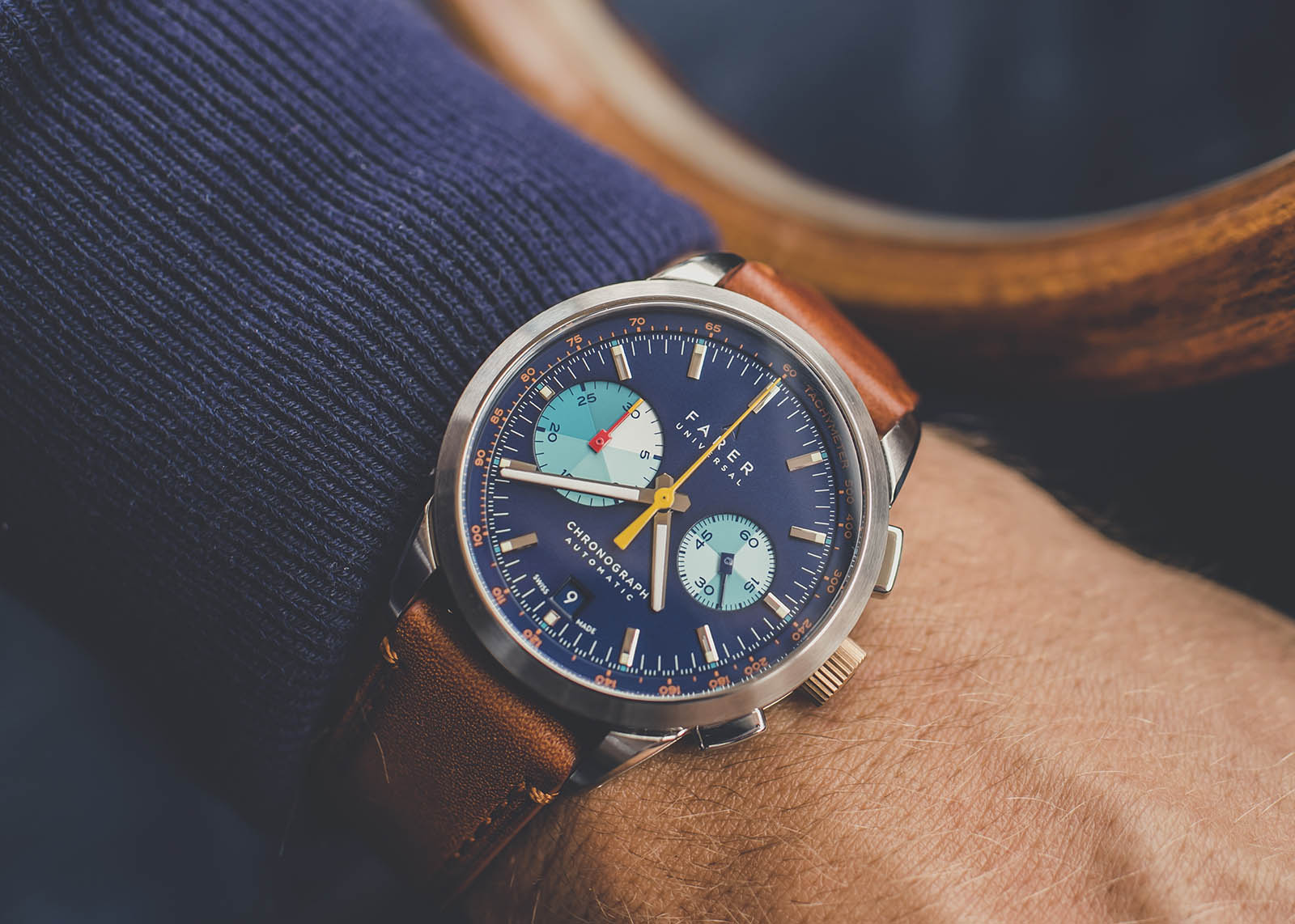 Accessibly priced, retro-style watches in smart colours are a recurrent theme for the Anglo-Swiss brand Farer, which is based in the UK but relies on a Swiss specialist for manufacturing. After the launch of a GMT automatic and “Super Compressor” style dive watch, Farer now debuts its first chronograph.

Like the brand’s preceding models, the chronograph is available in three iterations, the Cobb, Eldridge and Seagrave, all named after figures in 19th century British motor racing. The case is stainless steel, measuring 39mm in diameter and 12.5mm in height. It’s smaller and slimmer than most chronographs in its price range, largely due to the modular ETA movement inside.

It’s the Elaboré-grade ETA 2894-2 (the grade means the movement is decorated with blued screws and perlage, and regulated), which is an ETA 2892 base with a Dubois-Depraz module added on top. Depth-rated to 100m, the case is fitted with a bronze crown – a signature feature of Farer watches – that will acquire a patina over time. The bezel is brushed while the case feature a sandblasted recess along both flanks.

Though they are variations of the same model, admirable effort has been put into making each iteration different. All three watches have widely different dials, distinguished not just by colour, but also in the type of hour markers, and even the size and style of the chronograph registers. But all three share the common quality of having a matching date wheel at six o’clock.

The Cobb is the most unusual and distinctive of the lot, featuring a matte, dark blue dial with a “big eye” sub-dial at nine o’clock and applied baton markers. It has four distinct dial levels to display information, with a raised tachymeter and sharply sunken registers. The orange tachymetric scale, as well as the yellow and orange chronograph hands give the dial colour, complementing the sub-dials that are segmented into different shades of turquoise, giving it a look reminiscent of a vintage Heuer Skipper.

The most restrained of the trio is the Seagrave, a modern take on the classic “reverse panda” dial. Here the white sub-dials are outlined by a graduated grey scale, matched with orange hands for the chronograph and a green constant seconds hand. Like the Cobb, the Seagrave has applied indices filled with lume, and the dial is framed by an tachymeter scale with blue markings. Of late, no vintage-inflected watch line is complete without the evocative exercise of reproducing a faux “tropical” dial. The Eldridge has a striking, metallic tobacco dial that varies in hue under the light, matched with blue accents. Featuring a telemeter scale on its raised chapter ring, the dial has a pair of equally oversized sub-dials that have a snailed finish. And unlike the other two models in the range, the Eldridge has Super-Luminova Arabic numerals for the hours. The three models are fitted with quick-release Horween leather straps. The Farer Automatic Chronograph is limited to 100 pieces in each style, and priced at €1850 or US$1950, available direct from Farer.