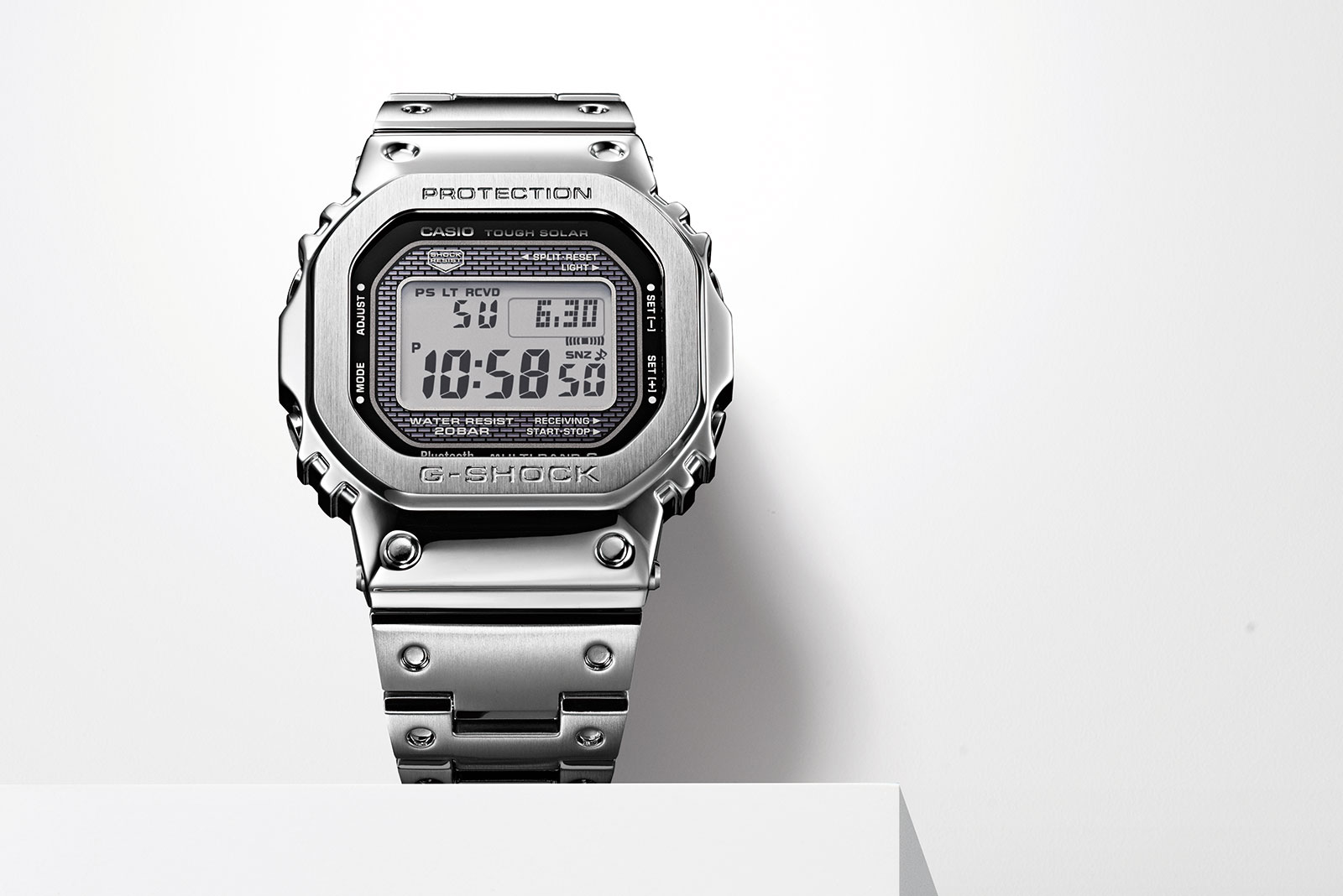 By far the best selling watch in history, having crossed the 100 million unit mark in 2017, the Casio G-Shock made its debut in 1983 as the DW-5000, characterised by its oblong bezel and brick-pattern dial.

The 5000-series has become a mainstay of the collection, and for its 35th anniversary Casio has rolled out the first all-metal 5000-series G-Shock. It comes in two variants, starting with the GMW-B5000 in stainless steel, which is part of the regular collection.

And the bling version: the GMW- B5000TFG-9, a limited anniversary edition in gold-plated steel to mark 35 years. (And at the same time Casio exhibited an entirely 18k gold G-Shock as well as a pair in coloured sapphire crystal cases at Baselworld, though none of these concept watches are for sale.) The steel GMW-B5000 is the first G-Shock to be forged entirely from stainless steel. It measures just a tad bigger than its rubber-coated cousins at 49.3mm by 43.2 by 13.0mm and weighs approximately 167 grams. Despite the change of material the watch still retains its signature shock resistance, with a double-case construction that relies on a resin insert (in red) between the inner case and steel bezel to absorb shock. And the case is naturally water-resistance to 200m. It has the standard functions of a G-Shock including world time (in 39 cities), 1/100th of a second chronograph and countdown timer, calendar, four daily alarms, Bluetooth connectivity as well as the Tough Solar function that uses solar cells on the face of the watch that allow it to run for 22 months on full charge. When paired with the dedicated G-Shock Connected smartphone app, the local time is set automatically, and the user can also adjust world time displays and alarms. There’s also feature to locate a paired smartphone within a distance of two metres. Intended to help locate lost phone, a pusher in the case activates an acoustic signal on smartphone, even when it is on silent mode. And then there is the Anniversary Limited G-Shock in gold IP (short for “ion-plating”).

A gold-plated, stainless-steel version offers almost the same amount of shock value as the 18k gold G-Shock, but at a reconcilable heft and price tag. The special edition GMW- B5000TFG-9 comes with exactly the same features and technology of the steel model, with the addition of an anniversary emblem on its case back. Only limited numbers will be produced, though the total production run has not been revealed. 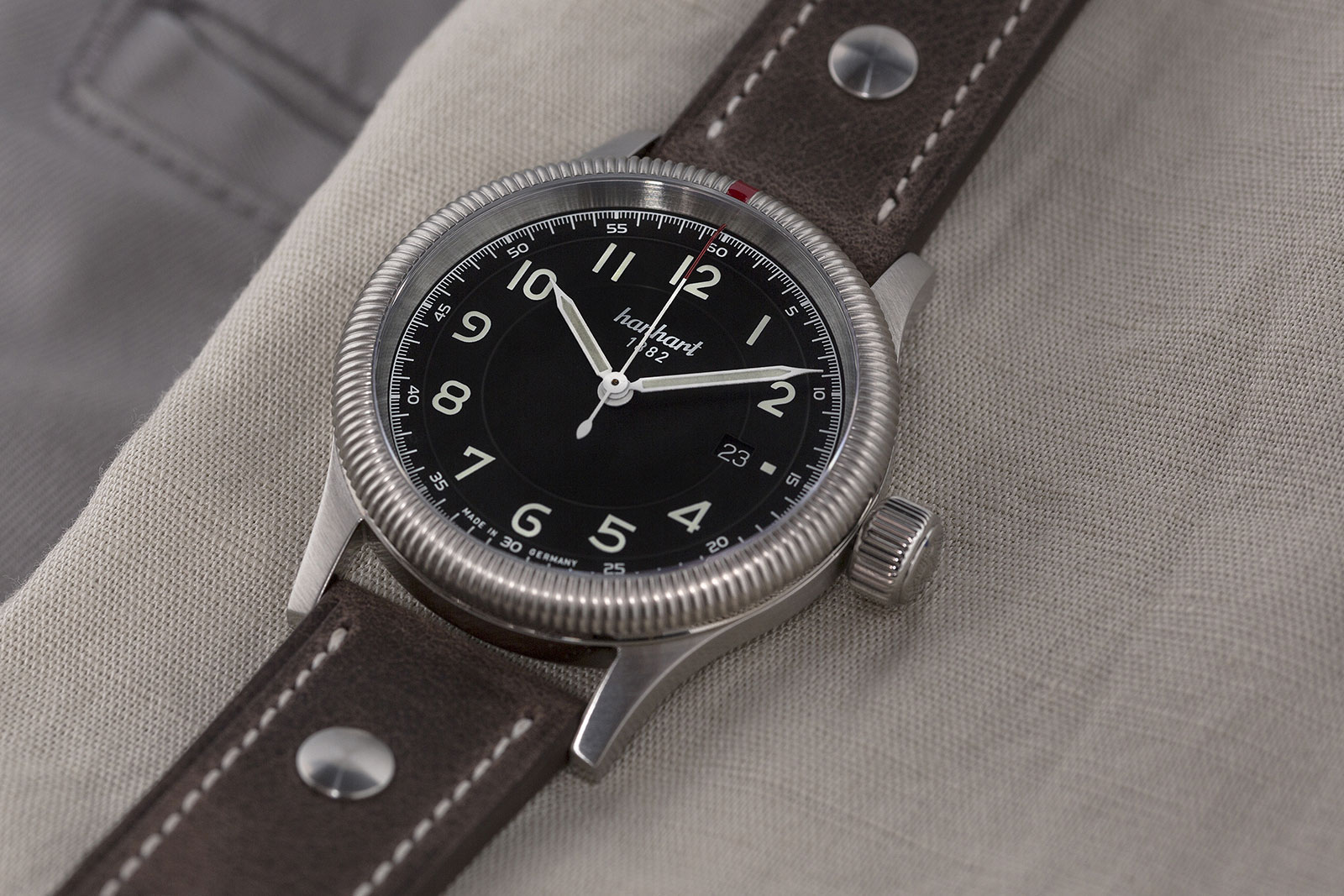 An archetypal but less widely known fliegerchronograph is the wristwatch made for the Second World War German air force by Hanhart and Tutima.

Distinctive because of its knurled bezel (and occasional red-coated pusher), the chronograph serves as the inspiration for the entry-level Hanhart Pioneer One. More specifically, the Pioneer One is based on the ref. 417 ES of the 1950s, a direct descendent of the Luftwaffe chronograph, but without the historical baggage. The key visual difference between the two were the hands, which were cathedral on the WWII version.

The Pioneer One retains the signature knurled bezel – it’s bidirectional and rotates freely – and syringe-style hands of the ref. 417 ES. The dial, available in black or white, has the characteristic Arabic hour numerals, along with a date at three o’clock. The brushed steel case is 42mm in diameter, with a display back that reveals the Sellita SW200 inside. It’s an automatic with a 38-hour power reserve that’s a clone of the ETA 2824.