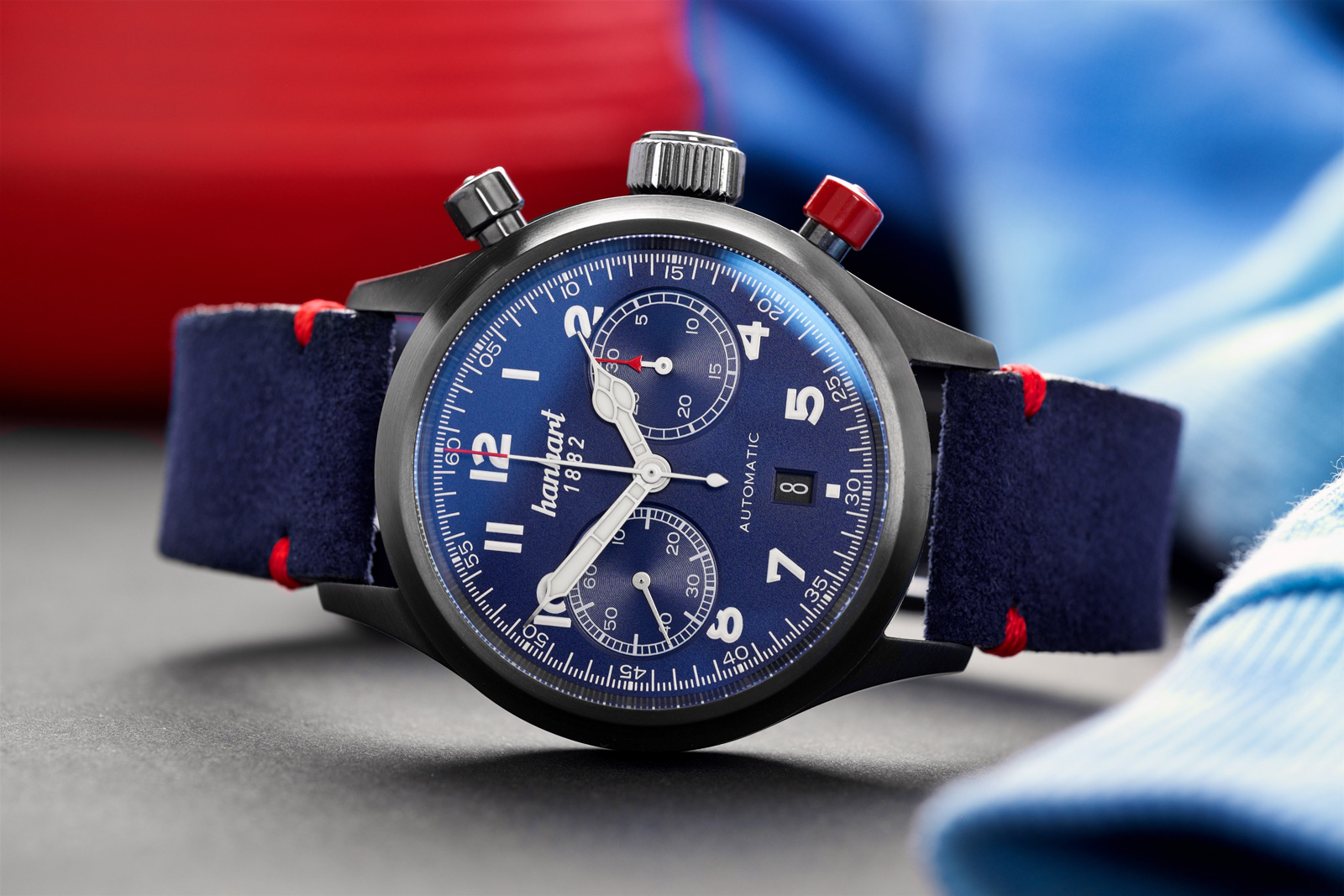 Historically the world’s leading producer of mechanical stopwatches – the sort once standard issue at athletic meets – Hanhart has shifted its focus to sports chronographs in recent years. Most of them are based on the brand’s vintage watches from the early- to mid- 20th century, especially the distinctive pilot’s chronographs it supplied to the German air force.

While some of its offerings are remakes, the brand’s latest is an overtly modern take on the 1930s pilot’s chronograph. The #FliegerFriday Edition combines a black-coated steel case with a dark blue dial as well as the brand’s trademark red reset pusher. With the origins of the design are vintage, the Flieger Friday Edition has a calculated casual style that stems from its inspiration – the social media hashtag #FliegerFriday, which refers to wearing a pilot’s watch over the weekend. 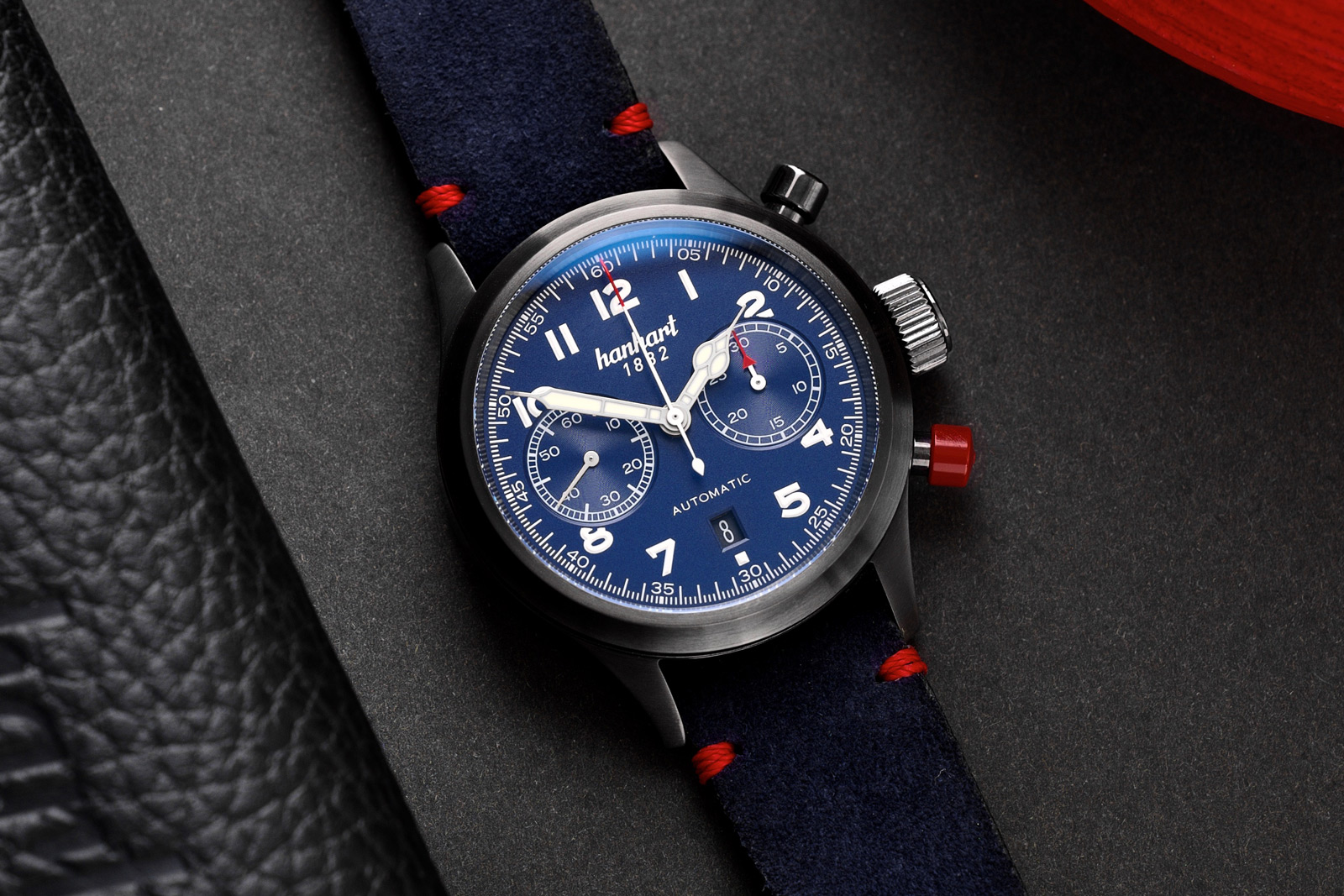 Hanhart is not short of vintage remakes – usually executed with signature elements like a red pusher or knurled bezel – so the modern style of the Flieger Friday Edition is unusual and welcome.

Admittedly the blue-dial sports chronograph formula is well used, but here it’s done with a little more novelty by pairing the dial with a steel case coated in black diamond-like-carbon (DLC). Add to that the splash of red, and the result is a striking watch that does live up to the hashtag’s basis of a fun, weekend watch. 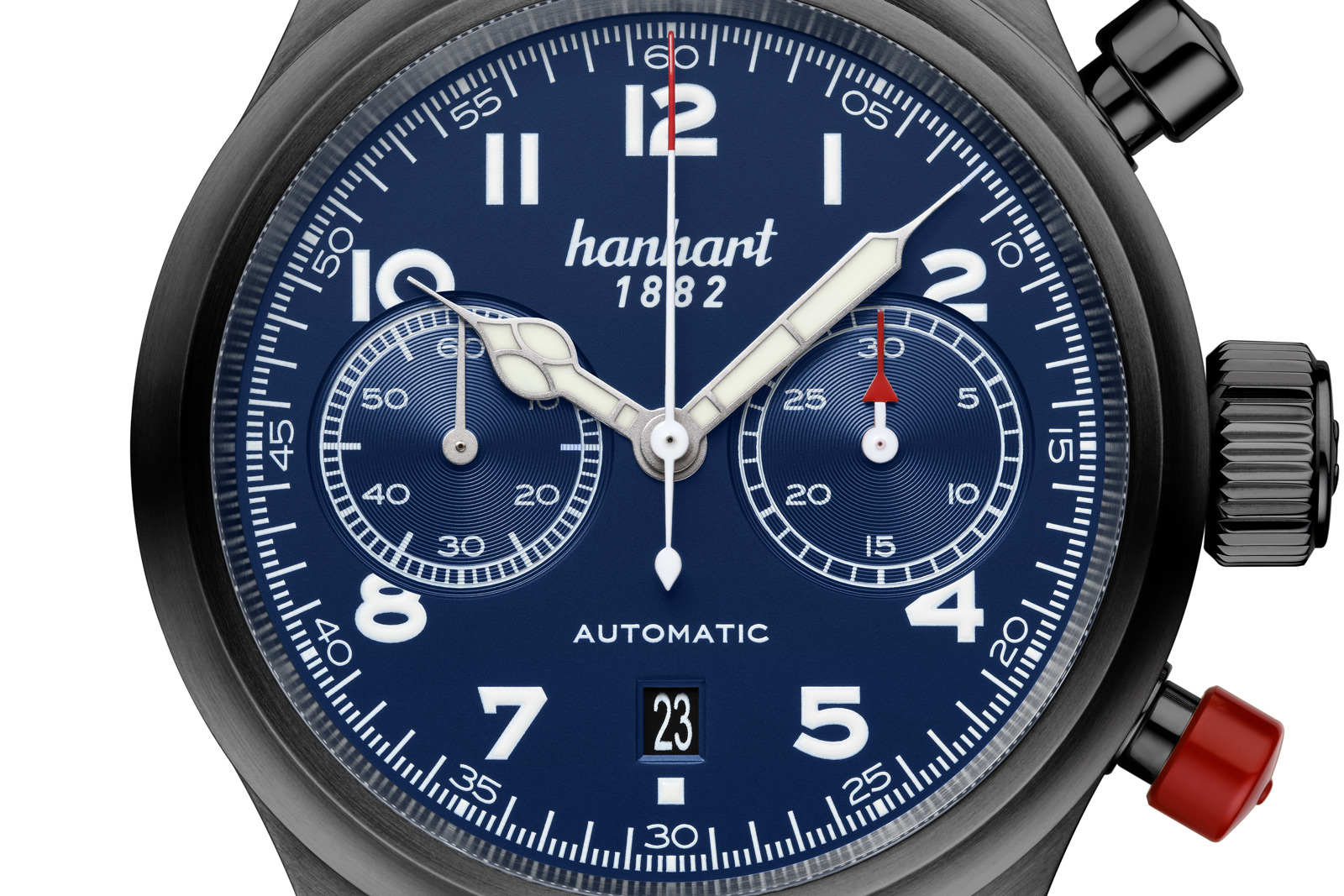 The watch is reasonably priced at US$2,700, which is not much more than the standard version. The price is well within the ballpark for a chronograph powered by a Sellita (or ETA) movement, but here it comes with the bonus of a DLC-coated case as well as Hanhart’s fliegerchronograph history.

Despite being an affordable watch, the Flieger Friday Edition is more than meets the eye. It incorporates a few notable vintage-inspired details, including the obvious red pusher, but also the less apparent asymmetrically-spaced pushers.

And it designers also got most of the other details right. The hands, for instance, are coloured to distinguish between functions – the hands for time-telling are frosted silver, while the elapsed-time hands are white with a red tip. Crucially, the watch incorporates several cool details taken from the vintage originals, including asymmetrically-spaced pushers. 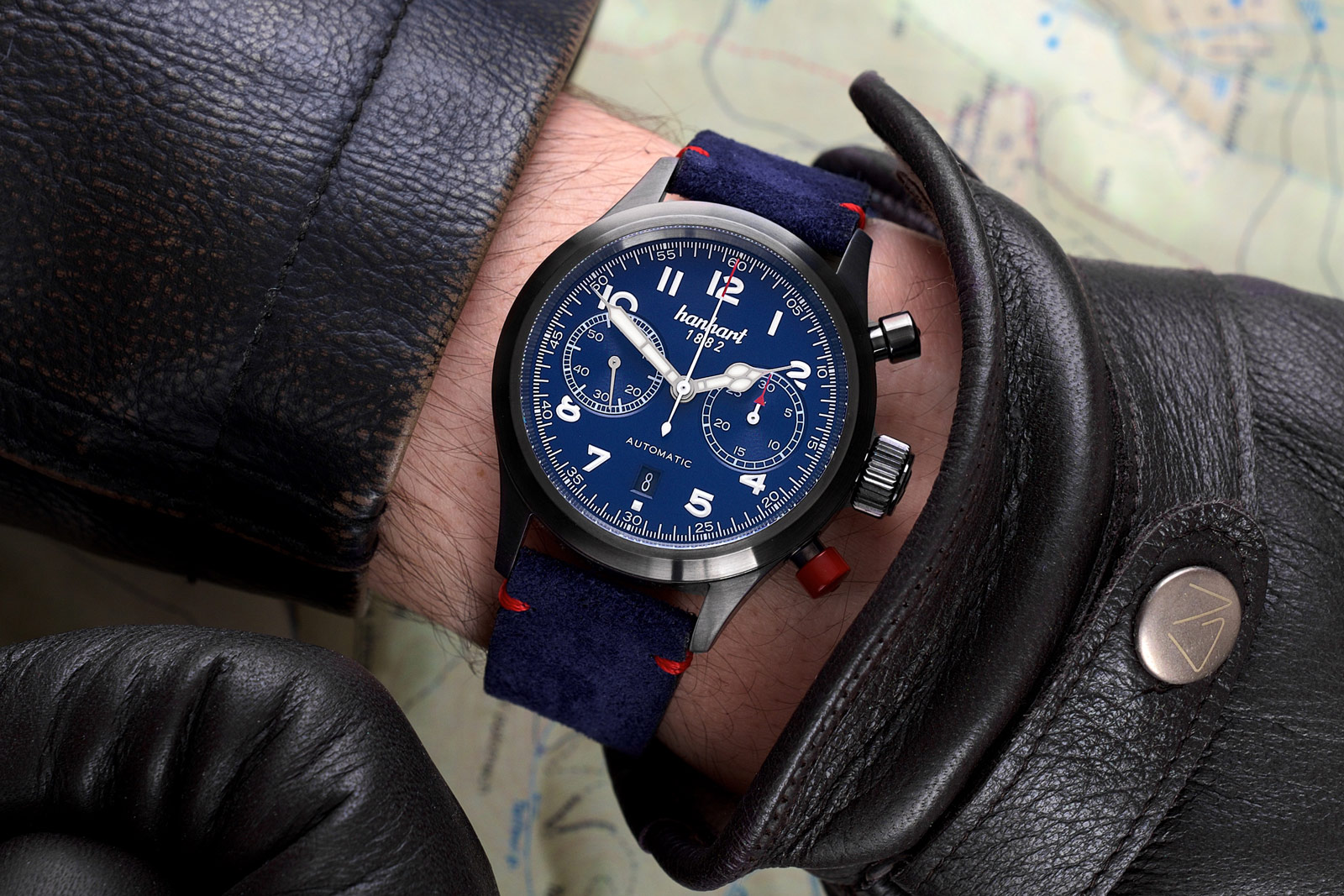 The bi-compax layout is a nod to the brand’s first-ever chronograph from 1939 that was powered by the in-house cal. 41. The modern version, however, is powered by a modified SW-500, derived from the ubiquitous ETA 7750. Specifically, it’s a cal. HAN3809, which is a SW-500 that’s been modified by movement specialist La Joux-Perret (LJP) to relocate the minute counter from 12 to 3.

Similarly, the cathedral hands are taken from the vintage original. More interesting, but less apparent, is a quirk found on the vintage original – asymmetrical pushers. They’ve been replicated on Hanhart’s modern-day offerings, with the start and stop pushers positioned at different distances from crown, with the start button sitting farther away.

The case size, on the other hand, is definitely modern. It’s large at 42 mm but sized appropriately for a modern sports watch, though it’s thick at 15 mm tall. 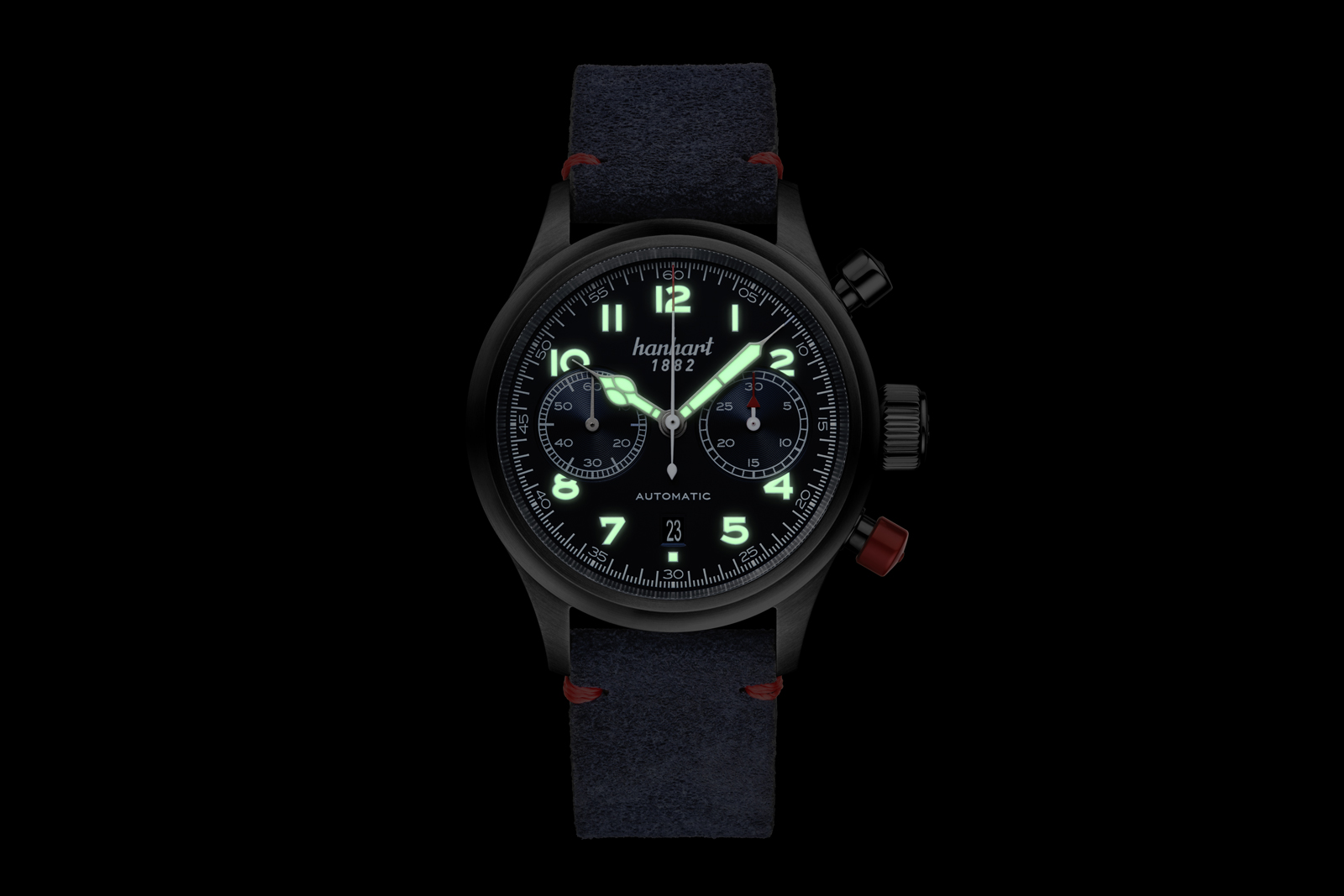