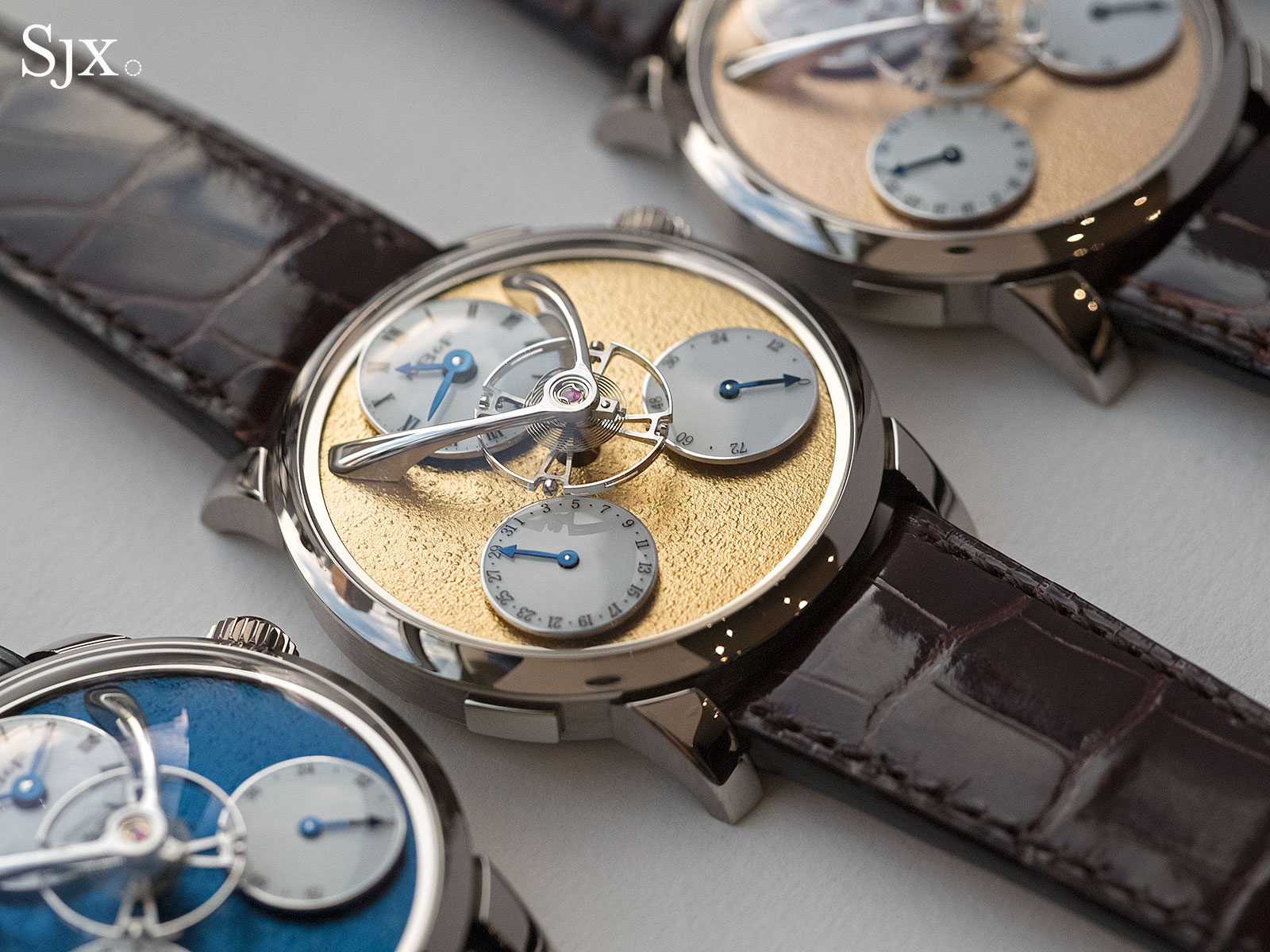 The MB&F Legacy Machine Split Escapement (“LM SE” for short) is perhaps the most practical of the Legacy Machines, showing the time, date and power reserve on the front, and a beautifully decorated movement on the back. And the fact that the calibre is derived from the movement inside the impressive, but pricey, LM Perpetual Calendar, doesn’t hurt.

Visually the LM SE sticks to the well established Legacy Machine aesthetic. Indications on white lacquered sub-dials – the time is at 12 o’clock, date at eight and power reserve at four. As on the Legacy Machine perpetual, the date is advanced via  button at four o’clock and equipped with an identical safety clutch that disengages the button while the date is changing around midnight.

Four different dial finishes are available, each limited to 18 pieces. While the colours differ – red or yellow gold, grey and blue – the dials are all finished with a frosting that’s more pronounced than previous Legacy Machines, giving it almost a stone-like appearance. The frosted finish, however, is still done with a wire brush, as on earlier models like the LM101. The two gilt finishes are clearly classically inclined, while the grey and blue feel modern. Over it all towers the oversized balance wheel. A sleekly polished steel bridge holds up the balance, which has no visible escapement connected, hence the model name. Instead the balance staff runs all the way to the back of the watch, where the escapement resides. That means the balance staff is exceptionally long, running almost the height of the case, while being extremely narrow. Keeping it stable is quite a feat. Size-wise the LM SE is standard for the line, measuring 44mm by 17.5mm, so it feels large but not exceptionally so. It’s helped by the short lugs angled downwards, allowing it to wear better than the typical 44mm watch, as well as concave bezel that leaves it appearing smaller. Most of the drama takes place on the back. Conceived by watchmaker Stephen McDonnell, the “engine” as MB&F labels it, is essentially the calibre inside the LM Perpetual Calendar, but minus the calendar mechanism. It’s a large movement with artfully shaped bridges and details that recall vintage pocket watches, as the Legacy Machines are intended to do. While each dial finish has a different movement plating to match, all of the movements are constructed and finished identically. The polished bevels, or anglage, on the bridges is impressively executed, as are the polished countersinks on the jewel chatons. Attention is similarly paid to less obvious components, including the spokes of the wheels. A particularly elegant detail is the elongated winding click spring, which is large enough to have bevelled edges and countersinks. The attention to detail, in fact, extends to the escapement, which sits right in the middle of the movement, mirroring the position of the balance wheel above. The edges of the pallet fork are chamfered, a thoughtful flourish on a barely observable part. In its minute details the movement is an intriguing blend of old and new. Despite the predominantly classical aesthetic, the barrel ratchets for the twin mainsprings and the winding wheels are distinctly contemporary. The teeth on the wheels, for instance, are typical of the standards laid out by Swiss horological standards board NIHS. Overall the calibre is wonderfully executed and proof that while MB&F is best known for its spaceship-like watches, it can equally do well in classical watchmaking.

The LM SE is priced at US$79,000 in all iterations. They are already available at MB&F retailers and M.A.D Galleries.

Addition October 21, 2017: More information on the date mechanism was included. 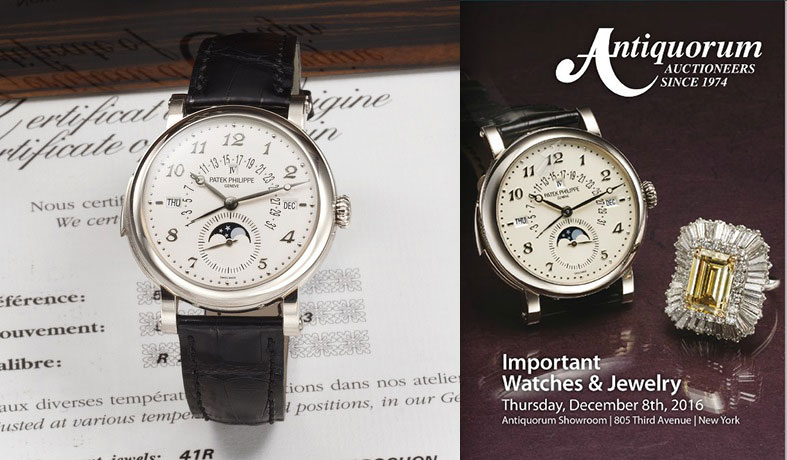 A Florida man who sold a Patek Philippe ref. 5213G at Antiquorum USA for over US$300,000 in November last year is still owed US$100,000, according to the New York Post. The seller, Andrew Woods, sued Antiquorum of New York in June 2017 for the balance, but instead received several watches as collateral – including a Patek Philippe wristwatch once owned by mafioso “Lucky” Luciano – until the outstanding amount was paid. The deadline for the payment has since passed.

Earlier articles in the New York newspaper also cite other lawsuits by clients who are still owned money by the auction house. The stories fail to mention, however, that the American Antiquorum is now completely separately from its Swiss and Hong Kong counterpart of the same name, the result of a drawn-out struggle over what was once the world’s leading watch auctioneer, founded in 1970 by Osvaldo Patrizzi, a tall Milan native with swept-back silver hair who invented the thematic watch auction. Just before he lost control of Antiquorum, the watch-obsessed Patrizzi had sold the vast majority of the priciest timepieces ever sold at auction.

The saga began in 2006 when Patrizzi sold half of Antiquorum – then still a single business globally – for some US$30m to Japanese publisher Artist House Holdings. He was ousted by the new shareholder a year after amidst allegations of impropriety on both sides, leading to years of bitter legal wrangling (including a dispute over the ownership of two Patek Philippe Calibre 89 watches) and bizarre financial manoeuvres (Artist House later sold its 50% share for US$30,000 to a Hong Kong shell company in 2008). Some of what transpired was almost comical: Antiquorum SA in Geneva was vengefully renamed Izzi Trip SA, an anagram of “Patrizzi”.

Artist House went bust not long after, and Patrizzi documented much of the drama on a personal blog, with entries variously titled “All of this Agony, and For What?” and “Finally, the sword of Damocles has fallen!”. Patrizzi tried to stage a comeback in 2008 with Patrizzi & Co., a watch auction house with an ambitious online bidding system and zero buyer’s premiums. The venture failed spectacularly and shut down two years later.

Intriguingly, Antiquorum managed to continue selling watches throughout the decade of internecine struggles, and even acquired watch forum timezone.com. That was all the more extraordinary given the revolving door management – American watch dealer Bob Maron was briefly chairman of Antiquorum USA – that eventually left Evan Zimmerman in charge of the American operation, where he remains today.

In October 2015, the situation inched towards resolution when Swiss private equity outfit Fides Business Partner took over Antiquorum Management Ltd., which runs the Geneva and Hong Kong auctions. And just earlier this year the private equity-backed portion of Antiquorum definitively split from the American half, leading to some confusion.

Legally, financially, and reputation-wise the two enterprises are separate, a distinction that continues online;Antiquorum Switzerland and Hong Kong are covered by the antiquorum.swiss website, while antiquorum.com remains with the New York entity. The lawsuits prove that the Geneva and Hong Kong business are perhaps more salubrious.