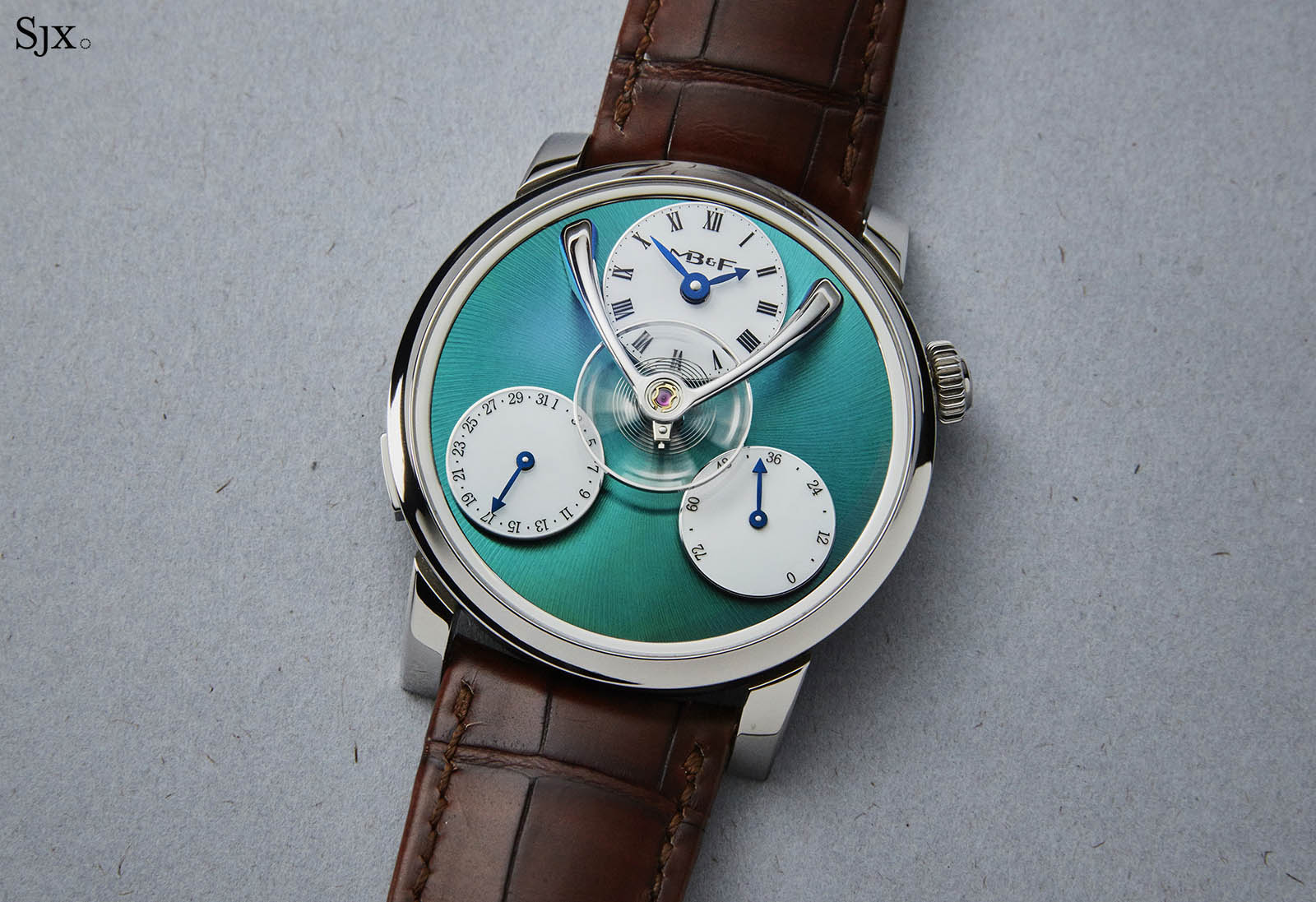 First unveiled two years ago, the MB&F Legacy Machine Split Escapement (LM SE) was an exercise in simplification, powered by calibre in the LM Perpetual but freed of the perpetual calendar. That brought to the fore the balance wheel, suspended high above the dial by an elegantly arched balance bridge, while displaying the time, date and power reserve across three sub dials.

And now – in a somewhat predictable move – MB&F has unveiled the latest version of the LM SE, combining a titanium case and a green dial. Physically it’s the same size, 44mm wide by 17.5mm, but now lighter. 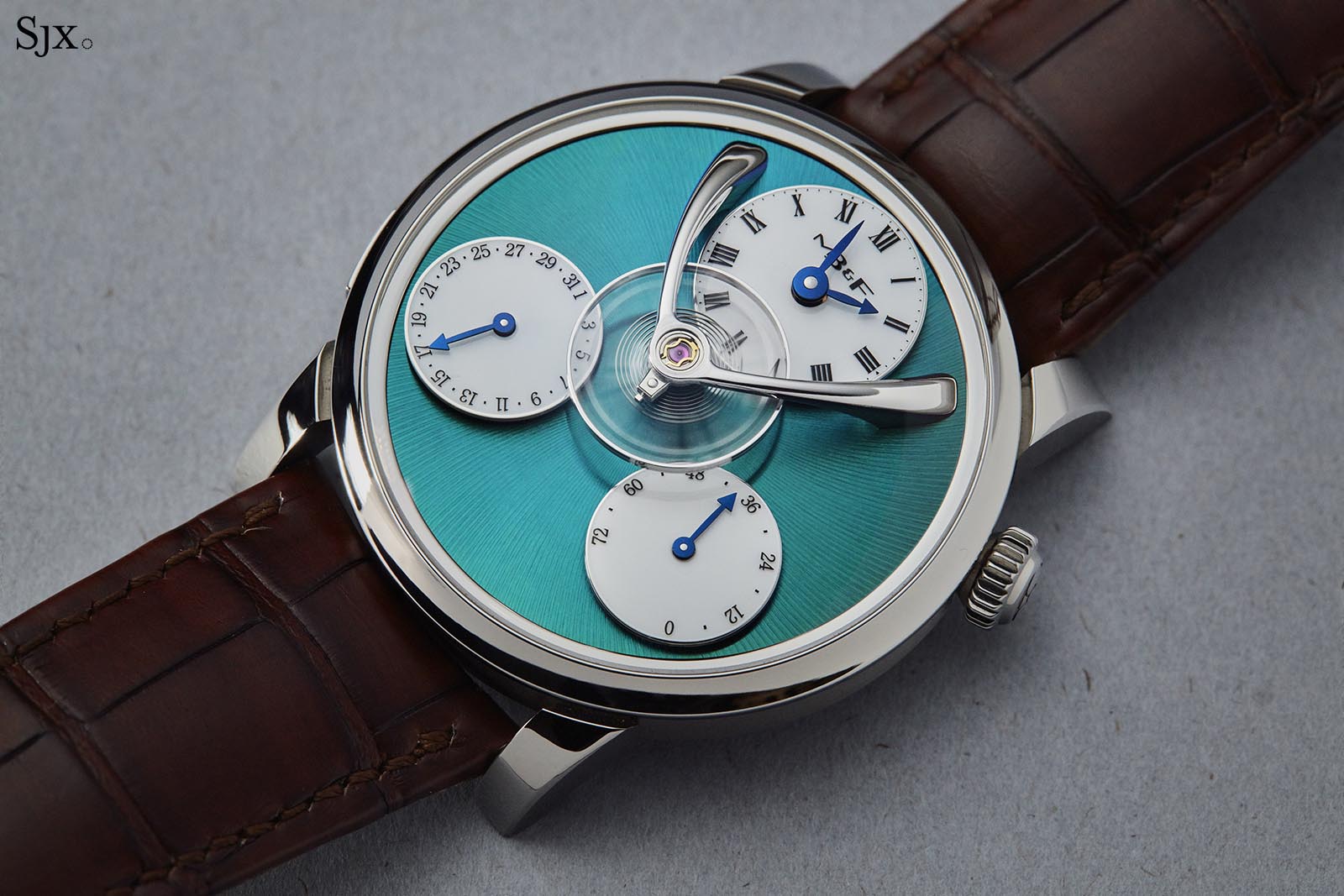 The blue-green, slightly iridescent dial with a radial brushed finish was used before on the LM1 Dubai Edition, LM2 Titanium and the LM Perpetual Titanium. It is achieved through plasma-enhanced chemical vapor deposition (or PECVD), a chemical process that vaporises metal and deposits it as a thin film layer on the dial surface.

It’s a good looking watch – the grey of the titanium case matches the green well – but the titanium-green combination feels well used by now. 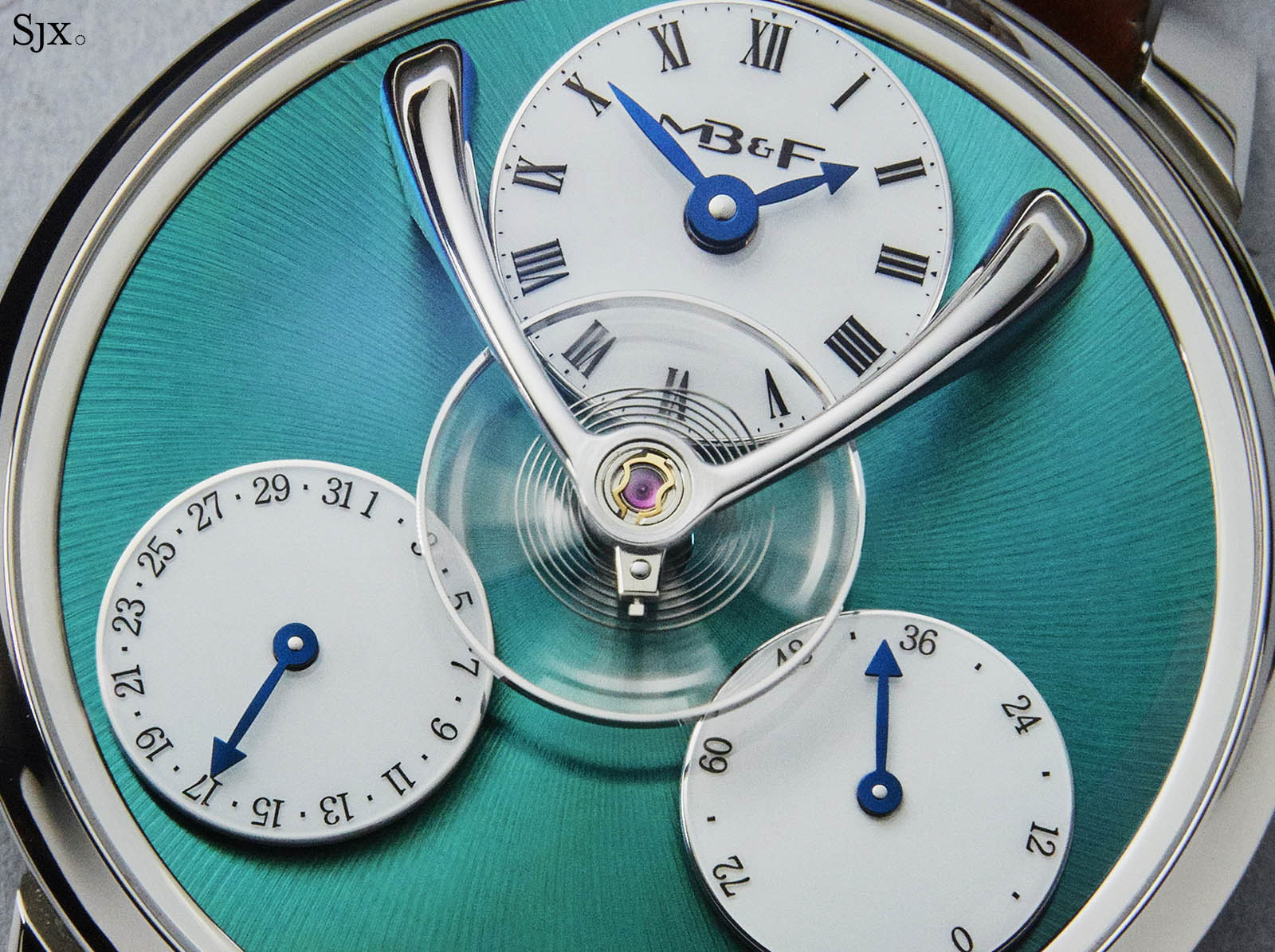 The details of the dial haven’t changed: three white lacquered sub-dials, and the balance held in place by an organically shaped bridge made of lustrously polished steel

And the impressive movement

The watch is mechanically identical to the earlier white gold version, featuring the same “Split Escapement” that first made its appearance in the LM Perpetual – although given the complexity of the latter, the escapement was much less apparent. Here the Split Escapement offers more visual payoff with the open spaces of the dial only highlighting the missing escapement.

The Split Escapement label is quite literal, as the balance has been separated from the escapement. The suspended balance wheels of all prior Legacy Machines have all featured a conventional construction, with the balance, pallet fork and escape wheel, side by side, as they would be on any movement with a lever escapement.

But in the LM Split Escapement, which was conceived by Irish watchmaker Stephen McDonnell, there is no sign of the lever and escape wheel on the dial side, instead, they are situated on the back of the watch. 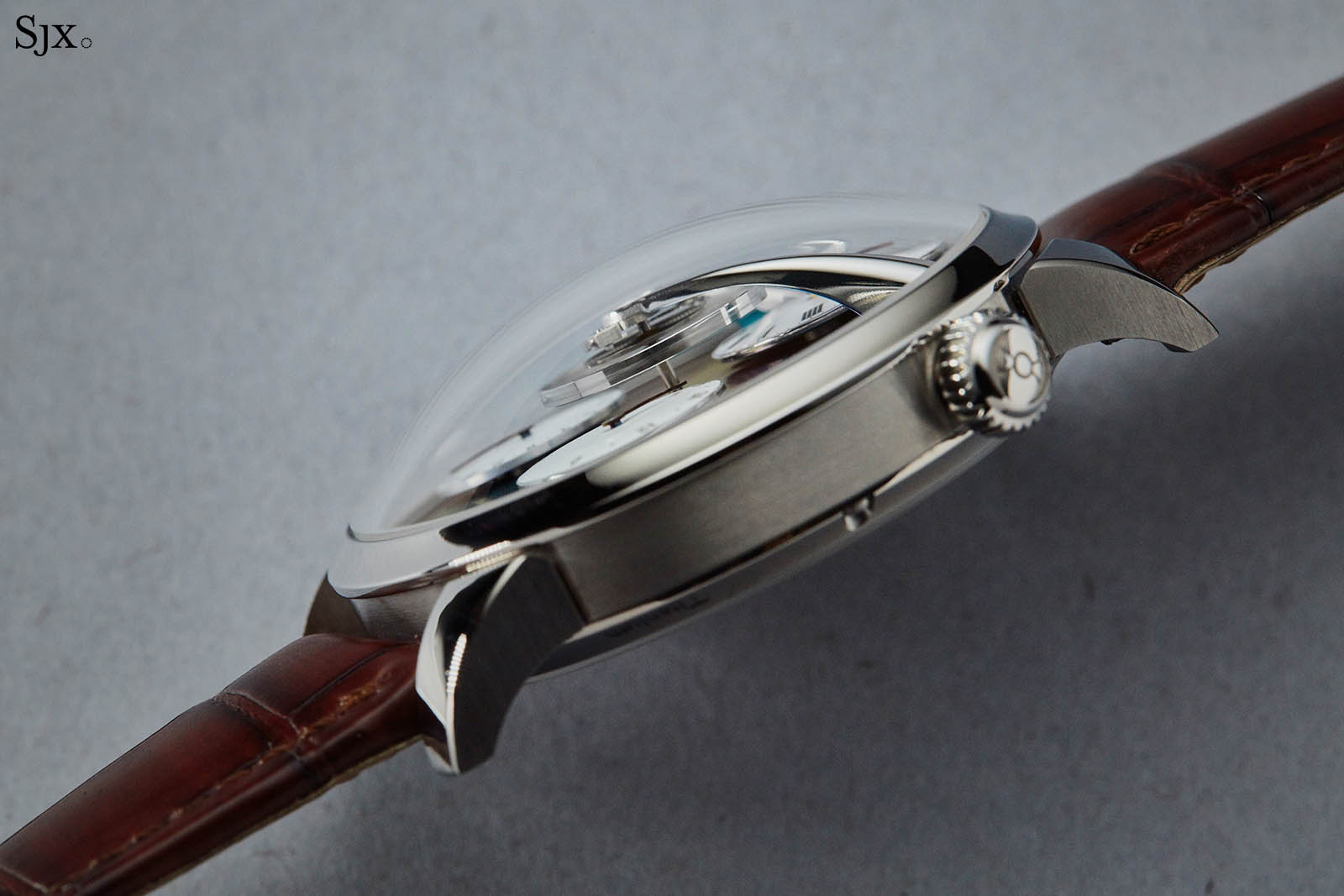 This was achieved with the use of a 11.78mm long balance staff that runs through the centre of the movement to connect the balance wheel and pallet fork. And to eliminate the effects of having such a long staff under continuous torsion, it is fitted at each end with an anti-shock, jewelled bearing while the bridge holding the pallet and escape wheel is separate, allowing for fine adjustment of its position. The mass of the elongated balance staff is also compensated by twin barrels that offer a 72-hour power reserve. 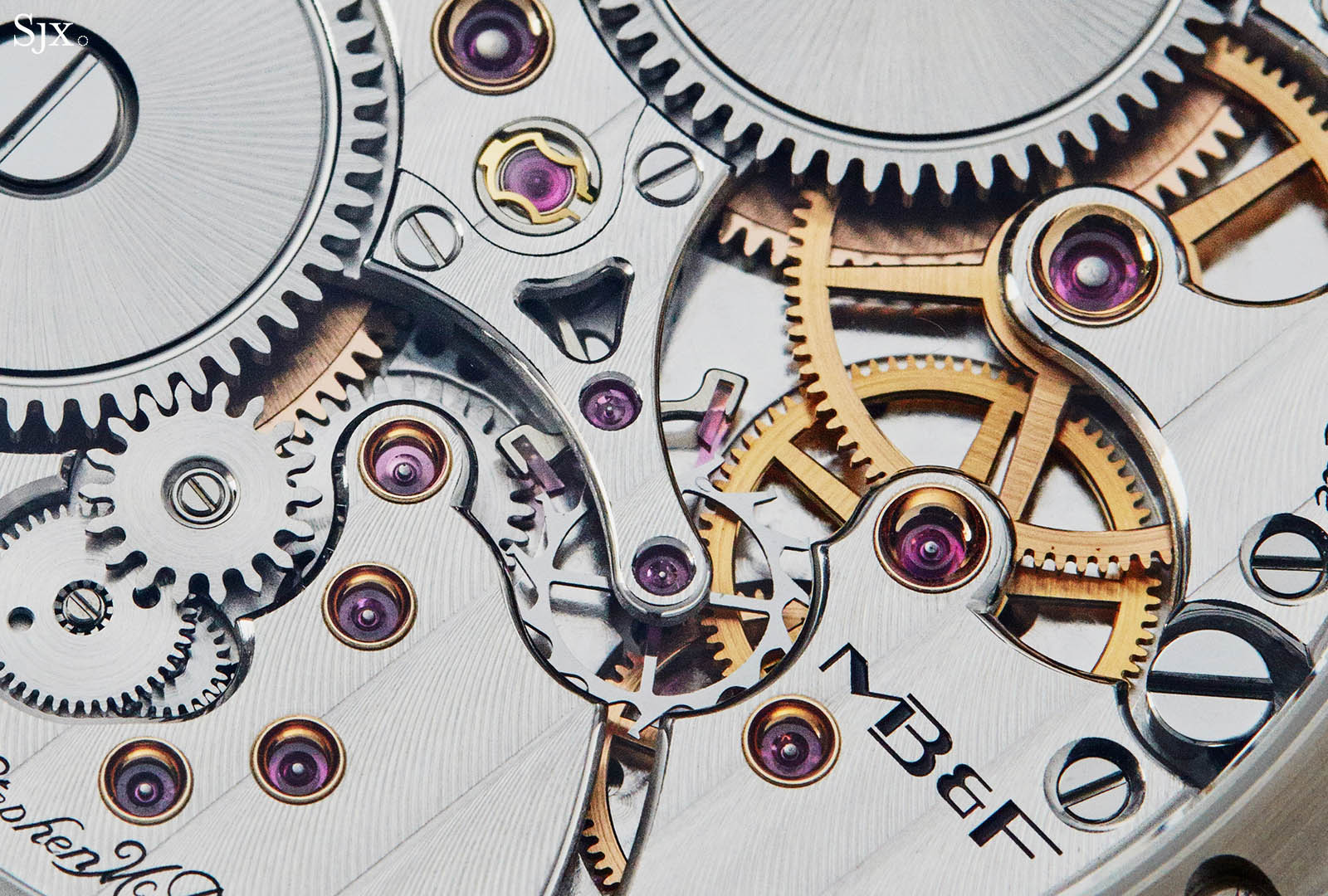 The escapement, with its separate bridge, visible from the back

As before, the hand-wound movement is designed and finished to the same level as the LM Perpetual, despite the LM SE being much more affordable.

MB&F has steadily improved the finishing on its Legacy Machines from the LM1 to LM SE, and it shows. The bridges are beautifully laid out and shaped, with complex curves that draw attention to the escape wheel an gear train.

Highly textural Geneva stripes cover the bridges, while their edges are chamfered, polished, and replete with inward angles. And even the winding click has bevelled edges and countersinks. 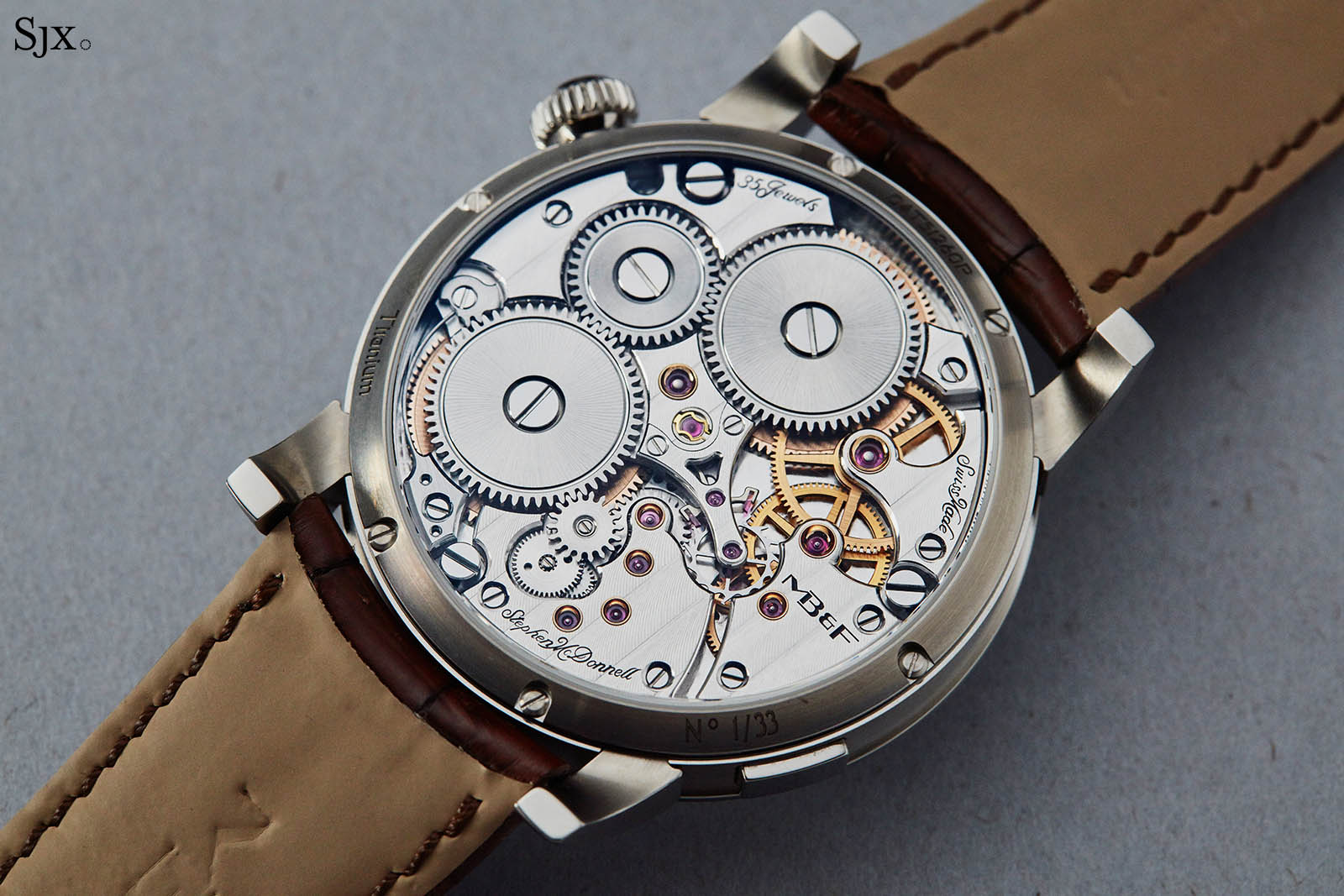 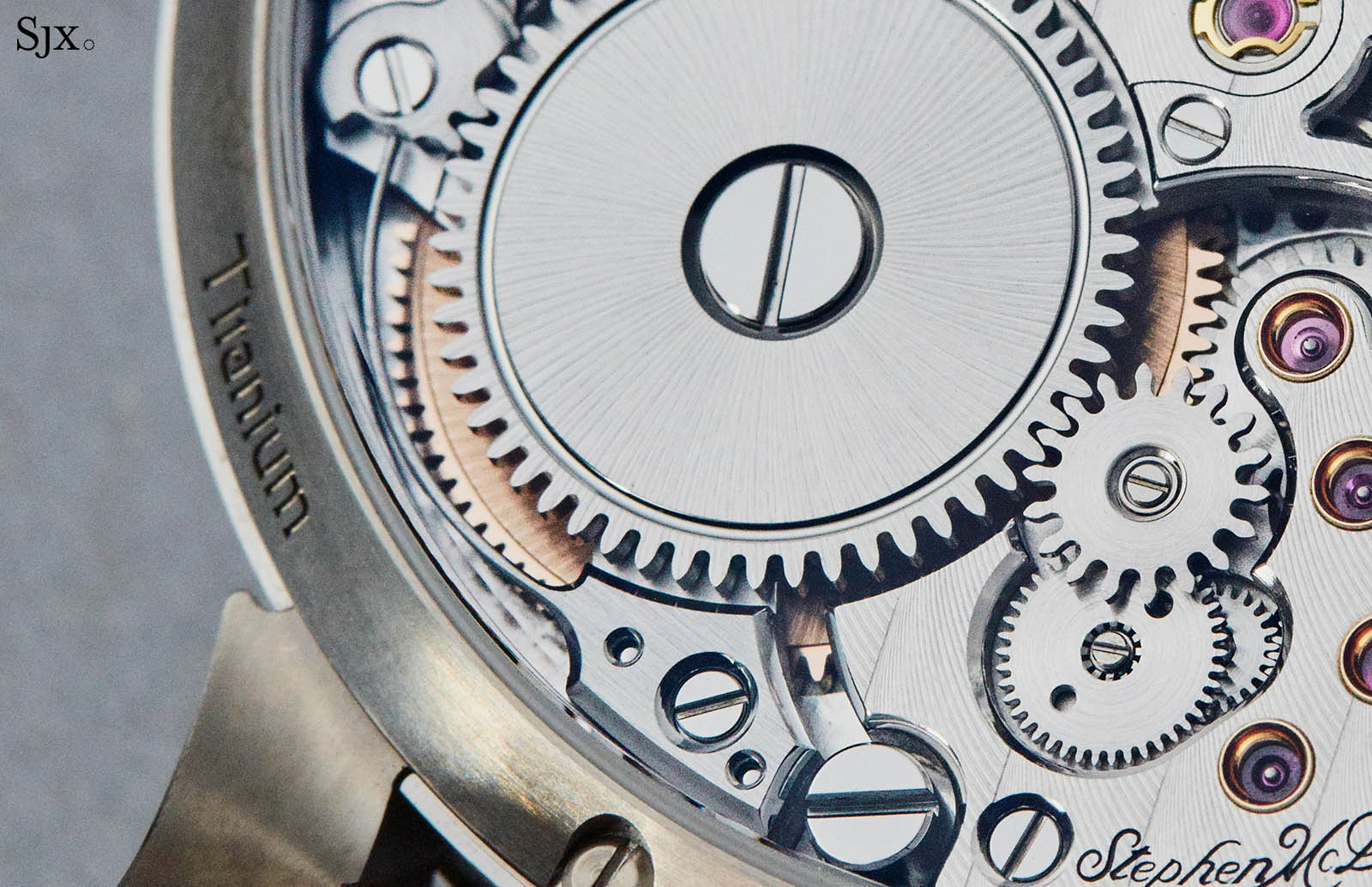 MB&F’s relentless pursuit of the novel and avant-garde (Spaceship! Robot! Spider!) means that anything derivative, even if it’s extremely well made as in this case, feels unexciting. The brand has, in short, painted itself into a corner. But that doesn’t take away from the watch itself, which is marvellously conceived and finished.

The MB&F Legacy Split Escapement in titanium is limited to 33 pieces and priced at 64,000 Swiss Francs.