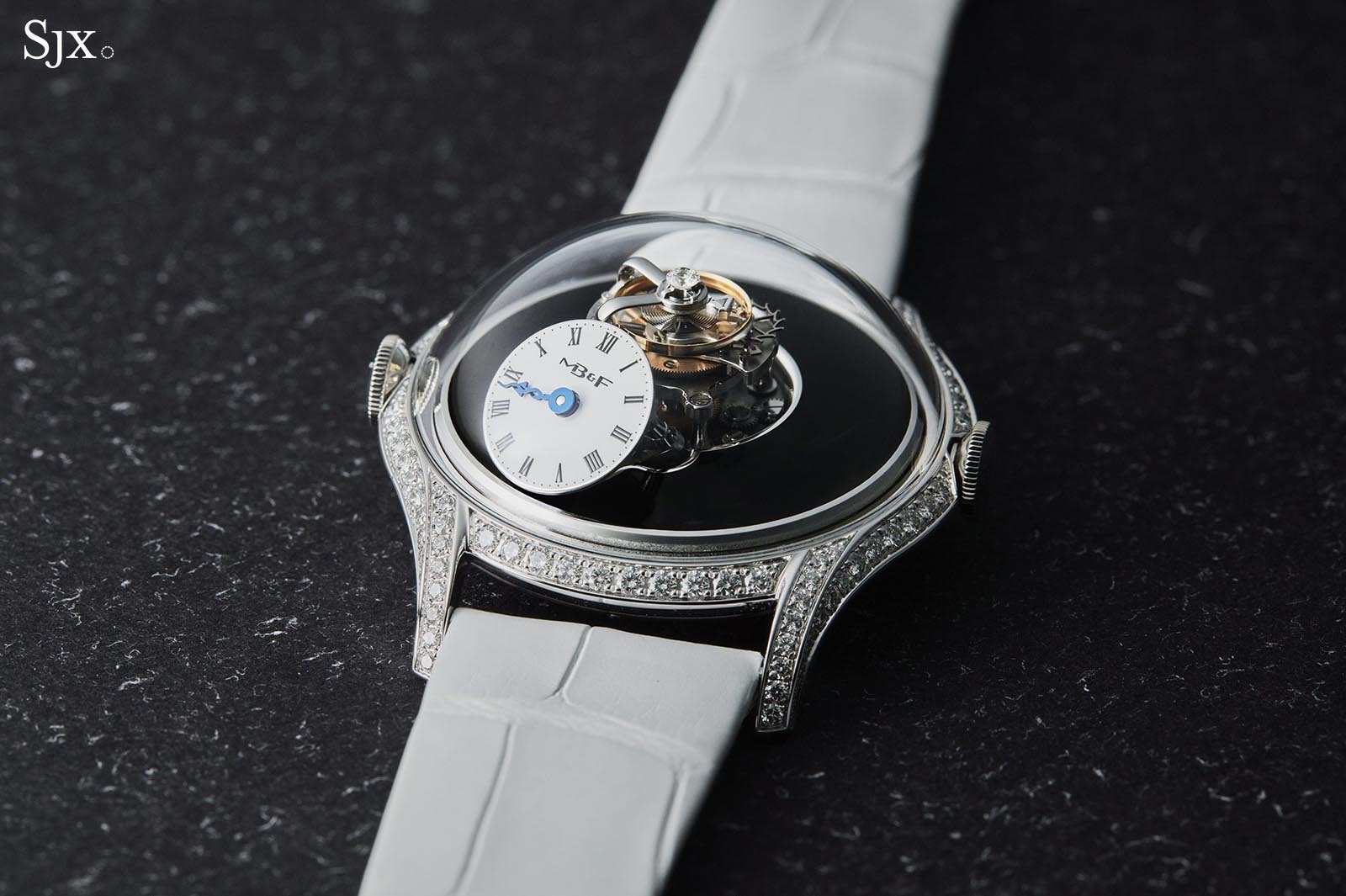 Having spent most of its decade-long existence creating epic contraptions that borrow from a gamut of boys’ toys and sci-fi, MB&F is finally rolling out a watch created from the ground up for the fairer sex – the Legacy Machine FlyingT. While the target audience isn’t the usual, the LM FlyingT still textbook MB&F, combining sculptural mechanics and novel design.

Four years in the making, the LM FlyingT features a central, flying tourbillon sitting high up under a massive, domed sapphire crystal. And because it was conceived as a lady’s watch from the get-go, the FlyingT is more compact than elegant than earlier MB&F watches for ladies that were essentially men’s watches set with precious stones. Designed by MB&F’s longstanding designer Eric Giroud, the FlyingT abides by a recurring element of the Legacy Machine series, with the hours and minutes displayed on a white lacquered sub-dial, but for the first time matched with elegant serpentine hands in blue-coated solid gold.

However, the FlyingT is the first tourbillon in the Legacy Machine line, and much like the more exotic HM6 and HM7, the FlyingT features a tourbillon executed in the most theatrical way possible, explaining the model name. In fact, it can be seen as a stripped back version of the HM7 Aquapod, with the round case and bulbous crystal serving to emphasise and elevate the tourbillon regulator.

The FlyingT has a 38.5mm white gold case set diamonds (either brilliant- or baguette-cut, depending on the version). The case is fitted with a dramatically domed sapphire crystal that measures 20mm at its highest – meaning the case is half as high as it is wide.

Though the diameter makes the FlyingT the smallest MB&F watch to date by quite some margin, the FlyingT still has impressive presence thanks to its height and gemstones. Despite its bulbous profile, the FlyingT sits elegantly on the wrist thanks to its narrow case band and slim, gently curved lugs. The construction of the movement – essentially construction like a column with a wide and flat base – means the height of the watch is camouflaged by the thin case band and domed case back.

Like many other MB&F watches, the case has two crowns: one on the left for winding, and another on the right for time-setting. Though the crowns are recessed into the case band, they evoke a pair of ears and don’t quite fit in with the elegant and glamorous styling.

(NB: Pictured is a prototype with bare crowns; the crowns on the finished watch are each set with 13 brilliant-cut diamonds.)

At the centre of the dial – either in black lacquer or set with diamonds to match the case – is a one-minute flying tourbillon beating at the relatively sedate frequency of 2.5Hz, or 18,000 beats per hour.

Like the HM7, the movement has vertical architecture, with the crucial sections of the movement – winding mechanism and rotor, barrel, gear train – stacked up like an irregular spiral staircase that culminates in the tourbillon. The flying tourbillon sits so high up it brings a new meaning to the label. A deliberate asymmetry has been incorporated throughout the dial, starting with the tourbillon.

Instead of the brand’s signature battle axe shape, the tourbillon cage takes the form of a “V”, just like the balance bridges on the other Legacy Machine watches. A counterweight had to be incorporated into the lower cage, opposite to the upper cage, to ensure stability of the entire construction.

And to give the mechanics a bit of bling, the upper cage is topped by a large brilliant that rotates with the tourbillon. The time display is decidedly asymmetrical, with the sub-dial for the time sitting at seven o’clock, and raised to a 50-degree angle from the horizontal for greater readability. In fact, the off-centre, inclined sub-dial makes this a driver’s watch of sorts, which is a favourite style of MB&F’s Horological Machine range of watches.

While visually simple, the inclined dial adds a good deal of complexity to the time display as it necessitates the use of bevel gears – conical wheels that mesh at an angle – in order to transmit torque from the horizontal plane of the barrel and gear train to the inclined plane of the sub-dial. The position of the sub-dial, combined with the rotating tourbillon, leaves the impression that the dial is an orbital display, but the sub-dial is, of course, stationary. It does feel like it wants to move, and perhaps might in future variations of the FlyingT.

A sun rising from the back

The view from the back is striking and surprising. Instead of the well used battle axe-style rotor, the FlyingT is fitted with an oscillating weight in the form of a radiant, stylised sun cast in relief and made of solid 18k red gold with a centre of platinum. The movement has a 100 hour power reserve, which is about four days, one of the longest amongst MB&F watches. In all, the FlyingT movement comprises a total of 280 components with 30 jewels. Like many recent MB&F calibres, the FlyingT was developed in-house by MB&F’s own constructors, although the brand relied on its usual partners for most of the components, as is tradition.

The FlyingT smartly avoids the pitfall of most complicated lady’s watches: looking like a smaller version of a man’s watch that’s been set with diamonds. Like the Poetic Complications from Van Cleef & Arpels, the FlyingT is convincing as a lady’s wristwatch. It is also sleek and striking (save for the twin crown “ears”).

But it is also least like any other MB&F watch; even the resemblance to its Legacy Machine siblings is passing and needs some examination to uncover. That’s either a strength or weakness, though if the FlyingT is the first of a series, then the former is more likely.

And last of all is the price, which is about US$107,000 for the base model. It’s a lot of money but relatively modest as such watches go. With comparable men’s watches with tourbillons and without diamonds usually priced in the same ballpark, and often much more, the FlyingT is a competitively priced. The FlyingT is available in three versions, starting with the entry black lacquer edition that has a black dial and a case set with about 1.7 carats of diamonds.

Next is the paved diamond version, set with 3.5 carats of diamonds on the case, dial and buckle.

And then there’s the baguette diamond model that boasts 8.2 carats of baguette-cut diamonds.