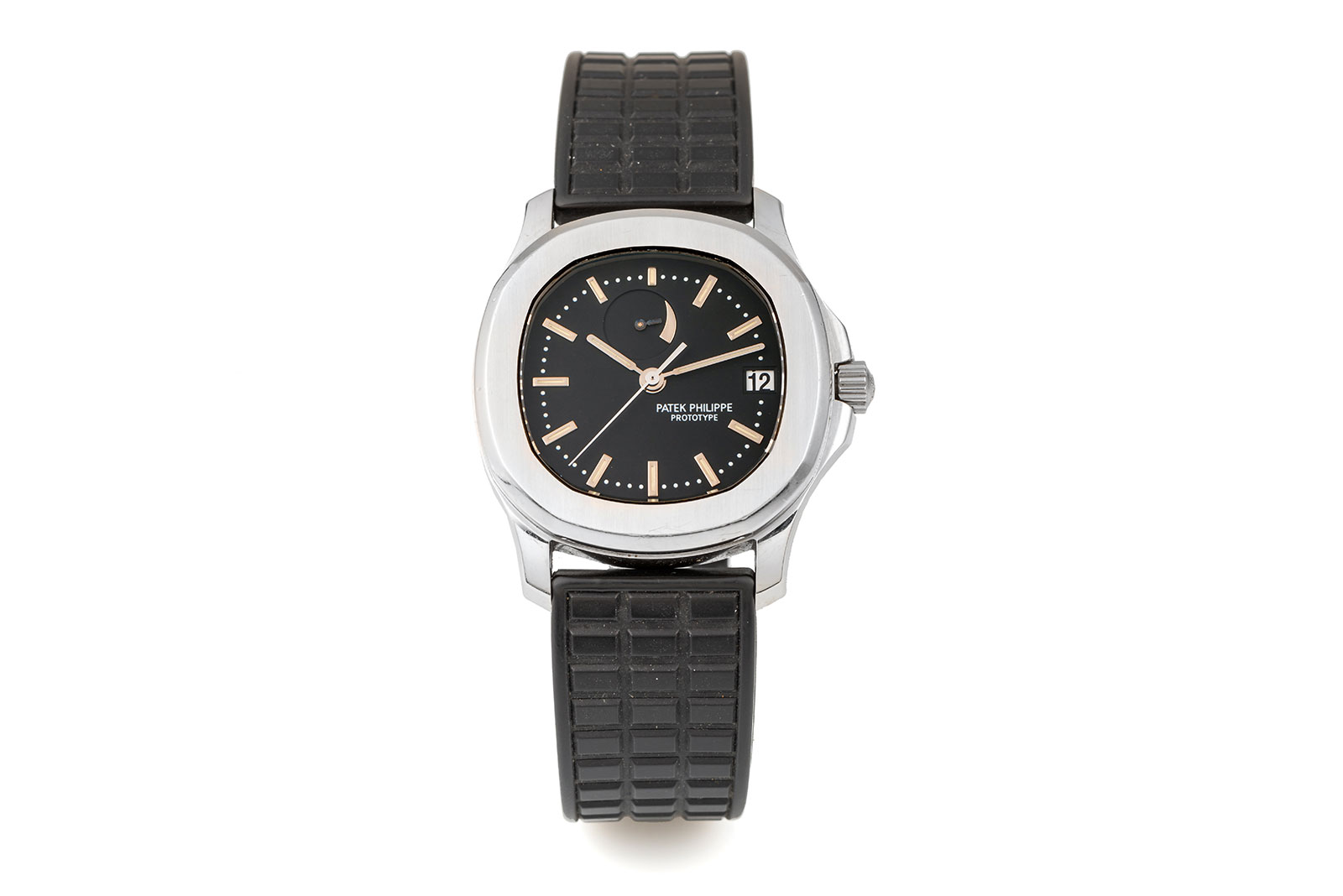 One of the most intriguing watches that will be offered in the upcoming Geneva watch auction season is the prototype Patek Philippe Aquanaut ref. 5060 that’ll go under the hammer at Antiquorum.

Labelled “prototype” on the dial, and “labo” (short for laboratoire) on the movement, the watch is equipped with a “comet” power reserve, a complication that was never found on the production Aquanaut. 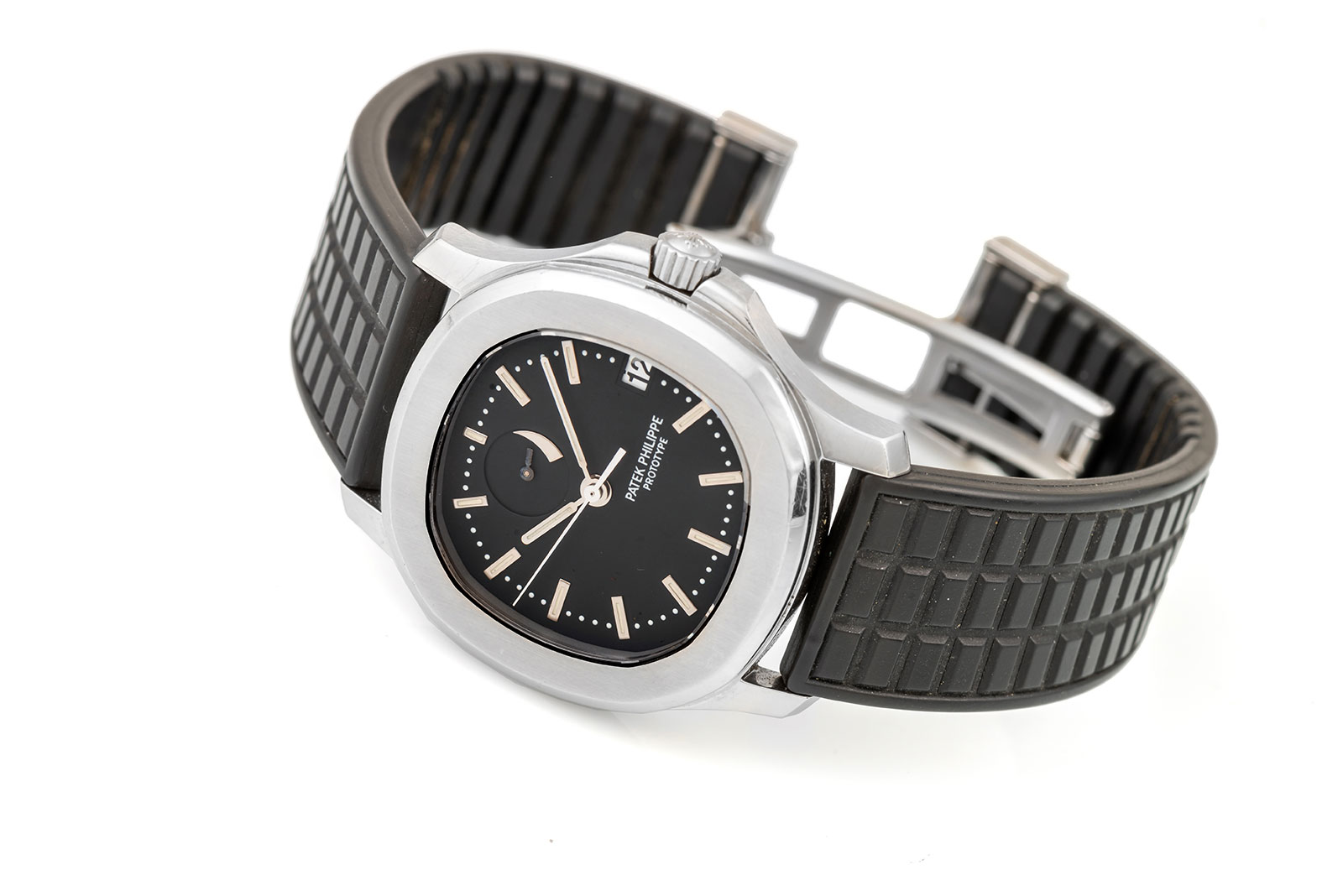 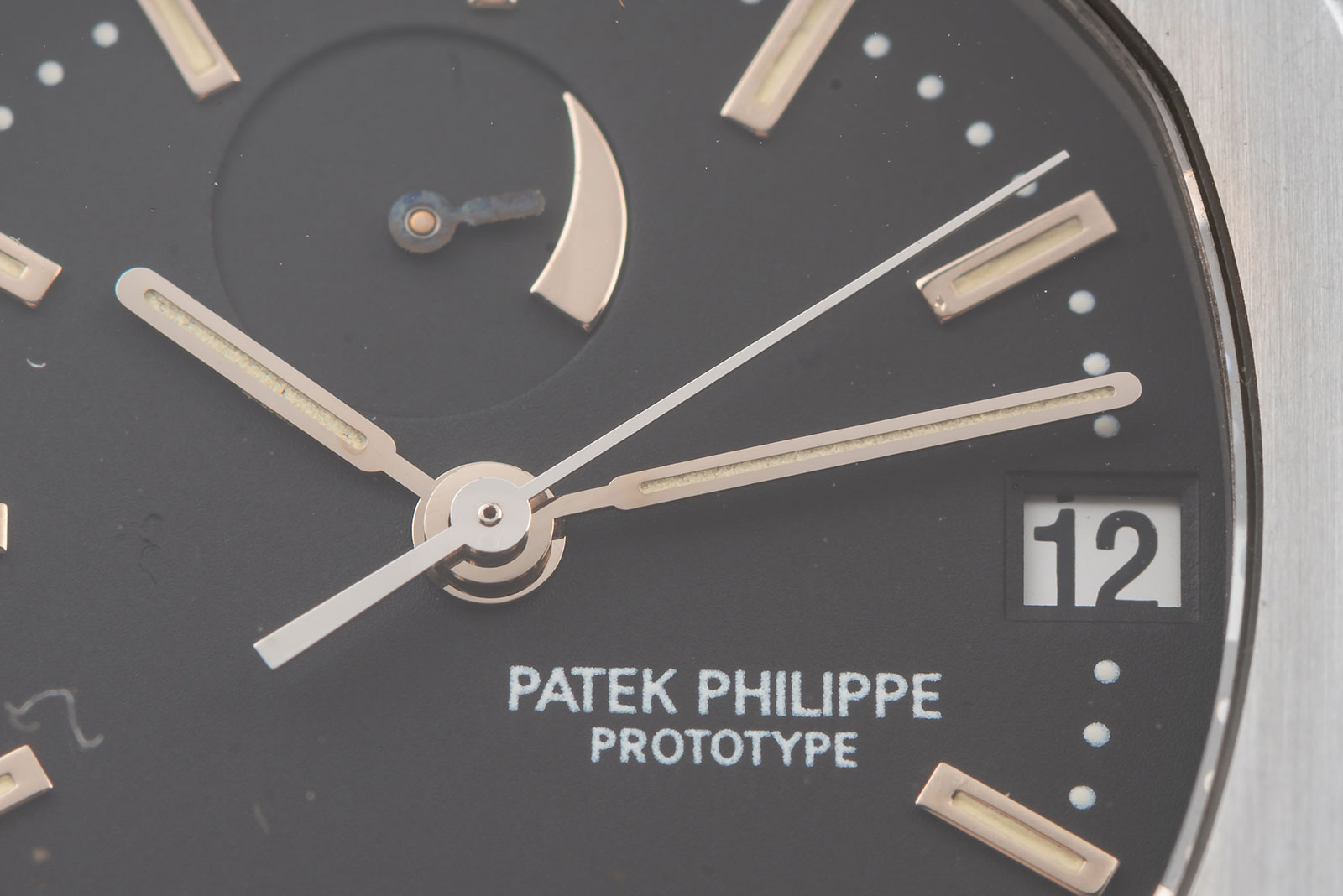 The dial is a smooth black, with hands and hour markers identical to that of the Nautilus

But the unnecessary complexity of the idea meant it was overly difficult to explain and understand, which is presumably why Patek Philippe abandoned the feature after the ref. 3710/1A was discontinued in 2005.

Featuring a date function and a chequerboard dial, the production Aquanaut ref. 5060A was launched in 1997 as the more casual and affordable cousin of the Nautilus. This prototype, on the other hand, has the same calibre 330 as the Nautilus ref. 3710/1A, which was introduced a year later. So it stands to reason this prototype was made to test a concept that was discarded in favour of the Nautilus. 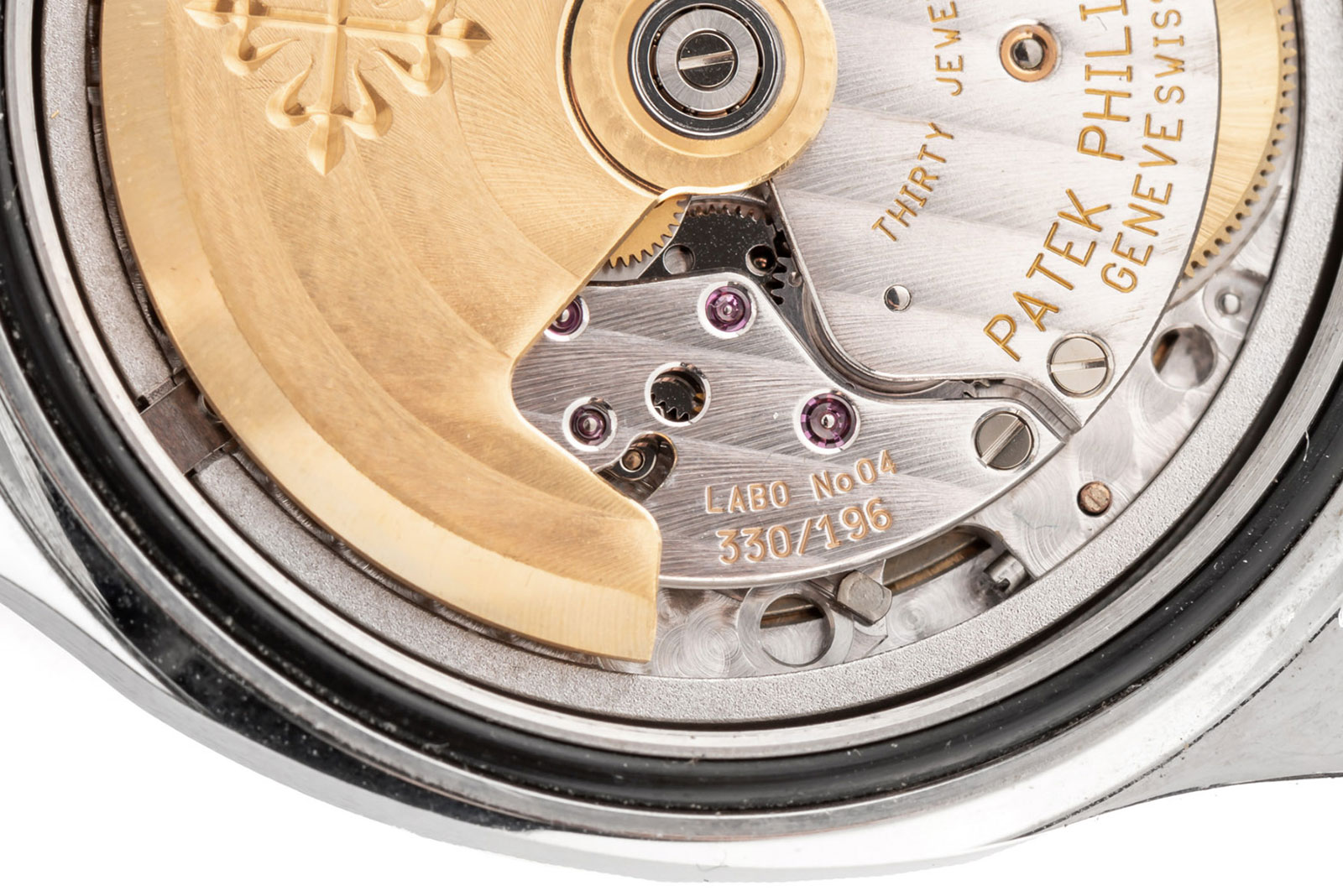 The movement is engraved “LABO No 04”

This is a proper prototype watch – the Oxford English Dictionary defines prototype as “a first or preliminary version of a device or vehicle from which other forms are developed” – rather than the pseudo-prototypes, identical to the stock models and numbered “0” or “00”, which are often sold by watch brands themselves for special occasions or charity.

Prototype watches are almost always sold at Geneva auctions because they are usually owned by former watchmakers or employees of watch brands. One recently sold but vintage example was the Omega tourbillon wristwatch that sold at Phillips two years ago for US$1.4m. And another was a modern day Jaeger-LeCoultre Reverso with a prototype dial that sold for US$40,000, or about eight times what the stock model would go for. 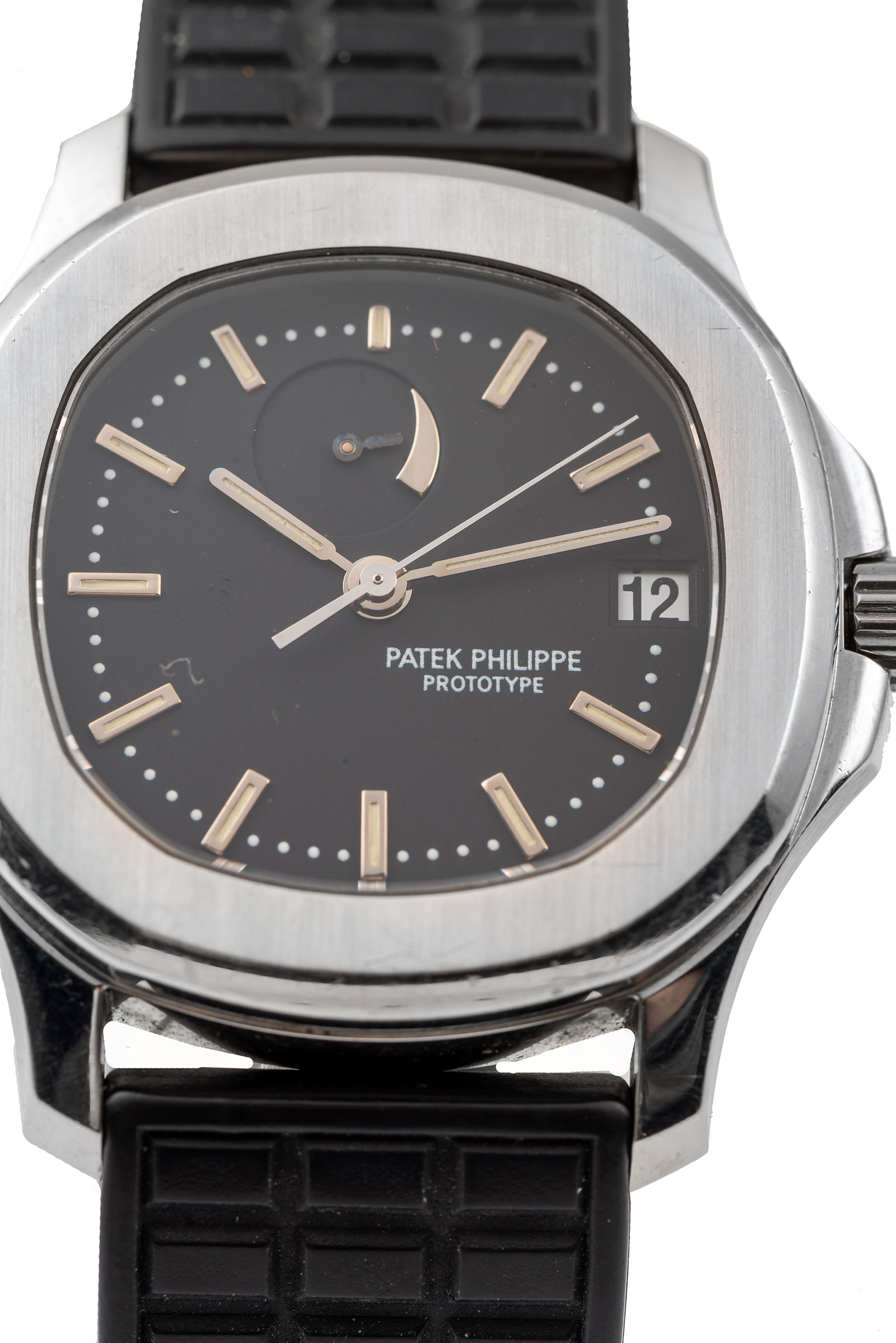 But only a tiny number of prototype Patek Philippe watches of any vintage have appeared in public; examples include the ref. 3412 designed by Gilbert Albert and a Nautilus ref. 3700 “Jumbo” with a white dial.

Antiquorum states that because this watch is a prototype, there is no extract from archives available.