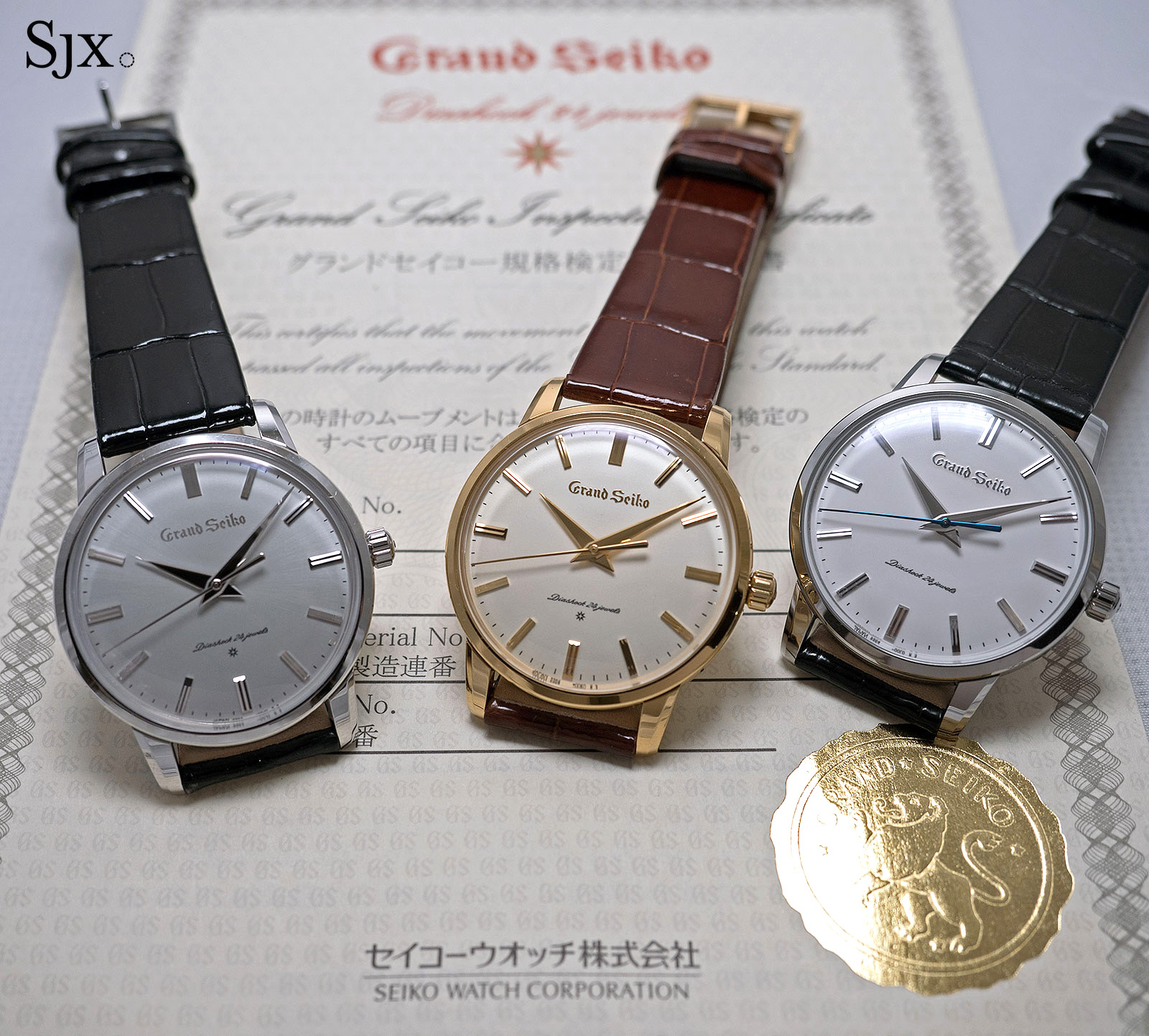 Grand Seiko reached a milestone at Baselworld 2017, when Seiko announced its line of high-end watches would be spun off into an independent brand. The occasion was marked with a revisit to the first ever Grand Seiko, the ref. 3180 of 1960, in two guises: a contemporary reinterpretation in titanium, and a trio of remakes, the SBGW251, SBGW2512 and SBGW253.

The three “re-creations”, as Seiko calls them, are actually the third (and hopefully last) instance Seiko is remaking the first Grand Seiko model. The first was the Grand Seiko SBGW004, a 300-piece limited edition in yellow gold made in 2001. Then a decade later it returned for Seiko’s 130th anniversary, in steel, yellow gold or platinum, also as a limited edition. This is cow that has been milked often – hard core fans might find it too easy – but the reissues remain appealing. The fit and feel of the watches are spot-on and importantly, they remain reasonably priced, so the proposition still feels honest. The steel reissue, in particular, is priced at under US$6000, making it easy to swallow.

The Grand Seiko reissues are available in platinum, 18k yellow gold, or stainless steel. All three stick to the same classic design, but with a larger, 38mm case (compared to the smallish 35.8mm for the earlier reissues and the 1960 original).

All are equipped with the calibre 9S64, a 24-jewel, hand-wound movement with a 72-hour power reserve. The movement in the luxe platinum version, however, has been specially regulated to a more stringer standard.

All three are matched with buckles featuring a relief Seiko logo that’s a dead ringer for the buckle on the 1960 original. And the Grand Seiko timing certificate that accompanies each watch is a facsimile of the 1960 original as well, illustrating the attention to detail with the remake. Onto the watches proper. The trio of reissues is topped by the Grand Seiko SBGW251, distinguished by its 999 platinum case as well as other features exclusive to the top of the line version. While most platinum watches cases are 950 platinum, meaning the alloy is 95% platinum, this Grand Seiko case is 99.9% platinum. Tangibly there is little difference between the alloys, though 999 platinum is slightly softer.

At 38.5mm in diameter this has significant presence on the wrist, with the 10.7mm case thickness helping it stay elegant. While it is not large by any modern standard, the fact that most Grand Seiko watches tend to be under 40mm makes this feel every so slightly big relative to its peers.

The platinum case gives the watch reassuring weight, something that’s lacking on the steel version of the reissue. This one feels solid and expensive. The details that set the platinum SBGW251 apart go beyond just the case metal. The dial is made of 18k gold and finished with a radial brushing, while the hour markers are similarly 18k gold. An eight-pointed star at six o’clock attests to the solid gold hour markers, an element also found on some example of the original ref. 3180.

The hands, however, are steel. While the materials differ, both the hour markers and hands are diamond-cut, giving them sharply defined edges that are characteristic of Grand Seiko watches. Notably, the “Grand Seiko” logo at 12 o’clock is engraved onto the gold dial, a feature found on certain examples of the ref. 3180 that is making a comeback for the first time. The engraved logo is found only on the platinum model, as is the specially regulated movement. The calibre 9S64 inside the platinum version is rated to -1 to +5 seconds day, compared to -3 to +5 seconds for the other models. While the platinum version is unquestionably the most impressive of the trio, both in terms of features as well as its weight in the hand, its monochromatic colour makes it feel slightly plain. And it’s also weighed down by its price, which is US$30,600 or ¥3.456m.

Visually the Grand Seiko SBGW252 in yellow gold is closest to the archetypal 1960 Grand Seiko, most of which had yellow gold-filled cases. Physically this is identical to the platinum model, with a 38mm case that’s 10.7mm high. Unlike the platinum model with the engraved logo, the gold version has a stamped, relief “Grand Seiko” at 12 o’clock, also a feature found on some specimens of the vintage original. The grained ivory dial gives this a significantly more retro feel than its two siblings, making it even more reminiscent of the original. While the dial is brass, the hour markers are 18k gold, accompanied by the star logo at six. The Grand Seiko SBGW253 is visually similar to its precious metal peers, but no-frills. It has the same stamped, relief logo, but the hour markers are steel, explaining the absent star logo. A blued steel seconds hand, however, gives the dial an attractive injection of colour. While the steel model is the same 38mm in diameter, the case is 11.2mm (compared to 10.7mm of the platinum or gold). This imperceptible height increase is due to the traditional 18k gold medallion set into the case back, which depicts the historical Grand Seiko lion logo in relief. While it is no-frills, the steel model is eminently affordable and a compelling buy, especially for those who missed out on the earlier limited edition remakes.