Not new – Alain Silberstein made several sapphire case watches in the 1990s – but now all the rage, the sapphire crystal watch case reveals the entirely of the Double Tourbillon 30°. The Technique variant of the watch was originally intended to showcase the finely decorated movement in all its glory, hence the lack of a dial and all the exposed mechanics on the front. The sapphire case takes this to a new level, with the movement now visible from all sides.

The sapphire case is made of three parts – bezel, middle and back. Because sapphire is more fragile, long screws with nuts that extend the height of the case (and are visible on the sides) secure its front and back. Consequently the case is larger than the ordinary Double Tourbillon 30° that is already a chunky 47.5mm in diameter. The sapphire version is 49.95mm wide and 17.15mm high.

Limited to eight watches, the Double Tourbillon 30° Technique Sapphire is exclusive to the North American market. The price is US$1.1m. 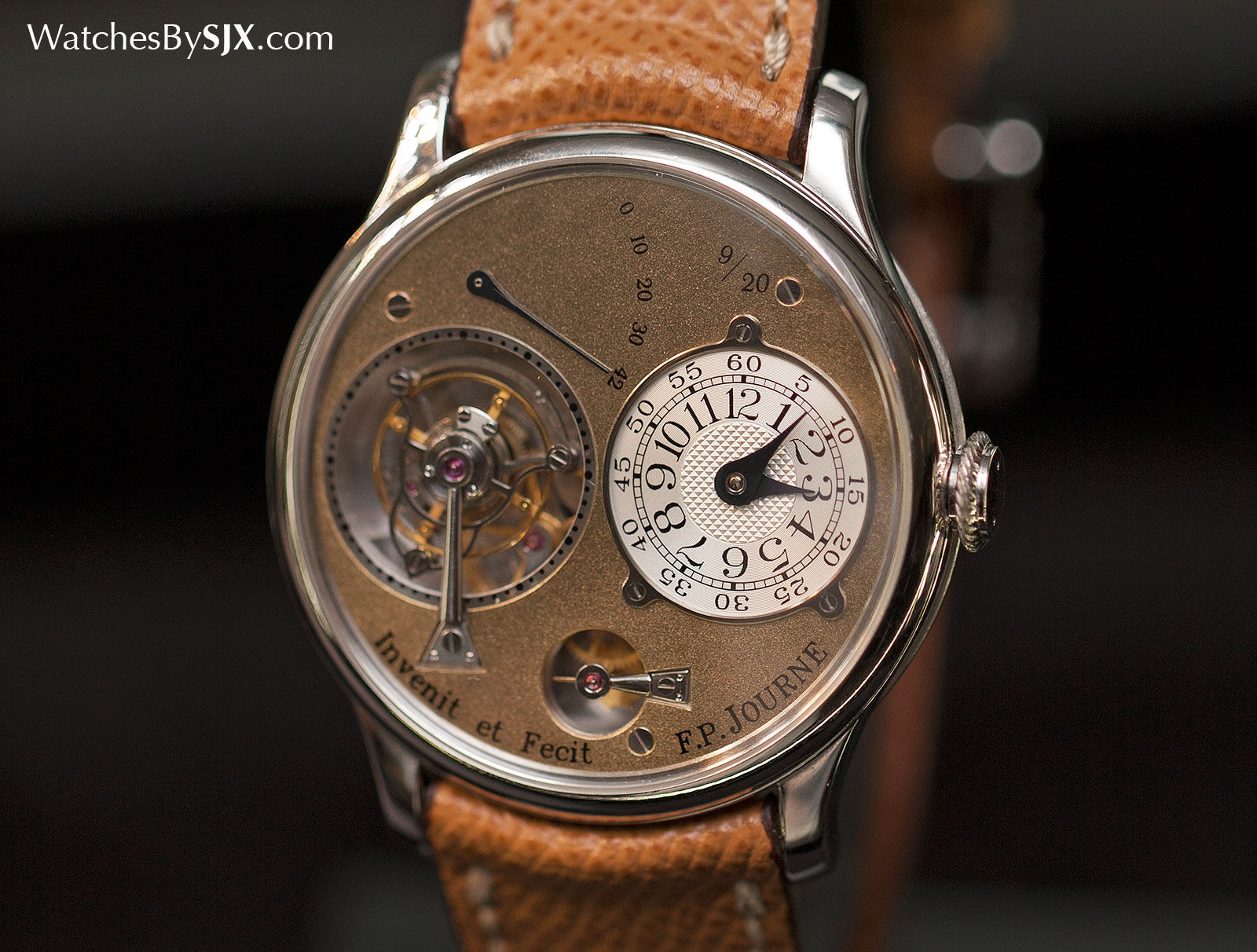 The origins of the Francois-Paul Journe’s Tourbillon Souverain, one of the landmarks in contemporary independent watchmaking, are well known. After having completed his pocket watch tourbillon (which inspired the T30 Anniversary Tourbillon), Journe pitched a wristwatch tourbillon to Breguet to be part of the Sympathique clock. Modelled on a 19th century Breguet clock, the Sympathique automatically wound and set the matching wristwatch placed into a holder at the top of the clock; Journe created the clock while he was part of movement specialist THA.

Though THA built the Sympathique clock, Breguet declined to use Journe’s tourbillon. He made three tourbillon prototypes anyway – featuring solid gold movements with a silver sub-dial screwed onto the base plate – that he showed during Baselworld 1991. According to a 2003 interview, Gunter Blumlein, then the chief of both IWC and Jaeger-LeCoultre, expressed interest in the tourbillon, intending to have it for IWC’s 125th anniversary. The economics did not make sense, and IWC went on to launch the Portugieser minute repeater and Portugieser Jubilee for its anniversary in 1993.

Undeterred, Journe presented his production tourbillon wristwatch, the Tourbillon Remontoir d’Egalite, at Baselworld 1999. Unlike the first three prototypes, these had more economical rhodium-plated brass movements, though Journe retained the look of the prototypes by fitting them with a gold dial and silver sub-dials, creating the signature look of the brand.

He first made 20 souscription tourbillons, sold to collectors who paid before the watches were complete (hence the “subscription” moniker), with the money being used to finance the subsequent production. Like the later Tourbillon Remontoir d’Egalite, these were 38mm in diameter, making them oversized watches for the time; Patek Philippe’s classic ref. 3970 chronograph with perpetual calendar was just 36mm. Though the Tourbillon Remontoir d’Egalite seems superficially similar across its production run, there are minor but significant variations. While these nuances are currently only of interest to a small group of diehard F.P. Journe fans, investigating the evolution of the model is interesting because it illustrates the evolution an independent watchmaker, from a one-man show to a company. And it also demonstrates the limits and drawbacks of small scale, hand-made production, with the evident unevenness in the early samples.

Each of the souscription tourbillons was numbered on the dial from “1/20” to “20/20”, as well as on the case back beside the crown. After the first 20, production continued with the tourbillons being numbered only on the case back, at the very same position. The numbering started where the subscription watches left off, with no. 21. Notice the serial number just beside the crown on souscription no. 9/20 Tourbillon no. 33, numbered in a similar manner to the souscription watches. John Clang

The watches were numbered sequentially on the back in the form “no. xx” until the 34th watch produced; it is unknown which number format the 34th watch possesses. From the 35th watch onwards that the numbering scheme became “xx/99T”, a format that would be used for several years thereafter.

Subsequent tourbillon watches were numbered sequentially, continuing from the 1999 production, with the year appended to the number. Intriguingly, it seems the year 2000 was skipped, with the tourbillon case numbers going straight from “XX/99T” to “XXX/01T”. There are no known examples of tourbillons numbered for the year 2000 having come up publicly for sale.

With the lowest known 2001 watch being 076/01T, and the highest known number for a 1999 specimen is in the early sixties, it is likely that the year 2000 was never included in the numbering scheme, or that less than 20 tourbillons were made in 2000.

The numbering continues until 2003, ending with watches numbered “XXX/03T”.

Variations on the face

F.P. Journe tourbillon dial variants were first outlined by Felipe Jordao, a New York-based watch collector who is moderator of the F.P. Journe forum on Timezone. The souscription watches are regarded as the first generation dial type.

The second generation is almost the same but without numbering on the dial, and the addition of “Remontoir d’Egalite” at 12 o’clock. One of the most obvious distinguishing features of the first and second generation is the rounded remontoir cock. Other features include smaller second marks around the tourbillon aperture and reduced font for the numerals of the power reserve display. Another less obvious feature is a small hole on the rim of the lower tourbillon cage that was intended for poising (ensuring the cage was properly balanced). Poising hole on the cage

On the third generation, the numerals of the power reserve increase in size, becoming almost the same size as the font used for the minute markings on the sub-dial, while the remontoir cock becomes flat. Early dials were also hand-finished, points out Jordao, leaving them with faint parallel scratches on the dial surface visible at an angle. It appears hand-finishing stopped sometime during the third generation. The transition from second to third generation occurred shortly after the souscription series of 20 watches. The third generation started with either the numbers 37/99T or 38/99T. This is known from fact that no. 36/99T is known to be second generation, while no. 38/99T is this generation.

Based on case numbers, sometime in 2001 the third generation dial gave way to the fourth, which was the style until the end of the production run. This dial type is characterised by smaller dial screws (located at one, five and ten o’clock). Fourth generation watches are numbered “XXX/01T” to “XXX/03T”. A third generation 1999 tourbillon (left), against a 2002 specimen of the fourth generation. Antiquorum

Early dials are also noticeably shinier than later dials, with a less glossy surface appearing sometime in during the third generation. It appears the finish on the early, shinier dials had an extremely thick layer of clear lacquer, giving them the unusually shiny surface as well as leaving the printed markings appear to float over the dial at certain angles. Notice the reflection of the dial lettering on the dial surface

Besides the dial, early tourbillons can also be distinguished via the case back. The souscription watches had case backs with hand-engraved lettering.

Subsequently, early examples (from case numbers 21 onwards) had shallow case back engraving, with the lettering etched in outline while the case back was secured by conventional, slotted screws. An example of an early, lightly engraved case back with later, Holt head screws

Change likely occured during the fourth generation, when the case back engraving became more pronounced (becoming as it is on current models), and slotted screws were dropped in favour of Holt head screws with three notches. Early specimens returned to F.P. Journe for servicing typically have the slotted screws exchanged for Holt head screws that are now standard on all F.P. Journe watches.

As illustrated by the upgrade to Holt screws for the case back, parts are often changed during servicing, meaning that the characteristics identified for each generation are only approximate. This is exacerbated by the fact that certain early F.P. Journe dials had a tendency to oxidise and discolour or spot, requiring either cleaning or replacement. And because components on early F.P. Journey were sometimes casually finished, owners of such watches often request changes.

Despite being classified as a generation, only small numbers of each dial type were made. While it is known that 20 of the first generation souscription were produced, the quantities of subsequent generations can only be deduced.

Based on known examples, either 16 or 17 of the second generation were produced, while the third generation probably numbers between 24 to 44. The fourth generation is the most numerous.

Though the total number of the Tourbillon Remontoir d’Egalite produced is not known, the highest publicly known case number is no. 281/03T (which means it was the 281st tourbillon produced and it left the factory 2003), on a specimen sold at Sotheby’s in Hong Kong in May 2015. These were numbered “XX/99-01T”, with the first four digits being the serial number of the watch, followed by the 2001 year suffix (which applied to the whole series of Ruthenium watches). It is unknown if these 99 watches were included in the numbering system for the regular production tourbillon.

Nonetheless, it’s safe to assume F.P. Journe produced at least 280 but less than 400 of the Tourbillon Remontoir d’Egalite from 1999 to 2003, with between 60 and 80 being of the first, second and third generation. Platinum cases are the most numerous, with rose gold cases numbering perhaps 50.

The coda to the tourbillon tale

Last year the Remontoir d’Egalite returned for an encore, as part of the five-piece Coffret 38 set. Made to mark the end of production of 38mm F.P. Journe watches, the set was made up of five stainless steel watches, including a Remontoir d’Egalite.

Largely similar to the fourth generation, the steel Remontoir d’Egalite has small dial screws, but with evidently thicker printing on the dial, as well as far more refined finishing than any of the early pieces. New York-based Hodinkee recently published a story covering the F.P. Journe tourbillon line that’s worth a read for an overview of the entire line from the start to current models.

Many thanks to Felipe Jordao, John Clang and William Rohr for their input.

Correction June 16, 2016: Included earliest known example of 2001 tourbillon, and IWC unveiling the Portugieser minute repeater instead of Il Destriero Scafusia for the anniversary.

One of F.P. Journe's signature complications, the Tourbillon Remontoir d'Egalite is one of the most notable modern tourbillon wristwatches. The early F.P. Journe tourbillons are timepieces have charm and character, evident in the rough edges and idiosyncrasies.