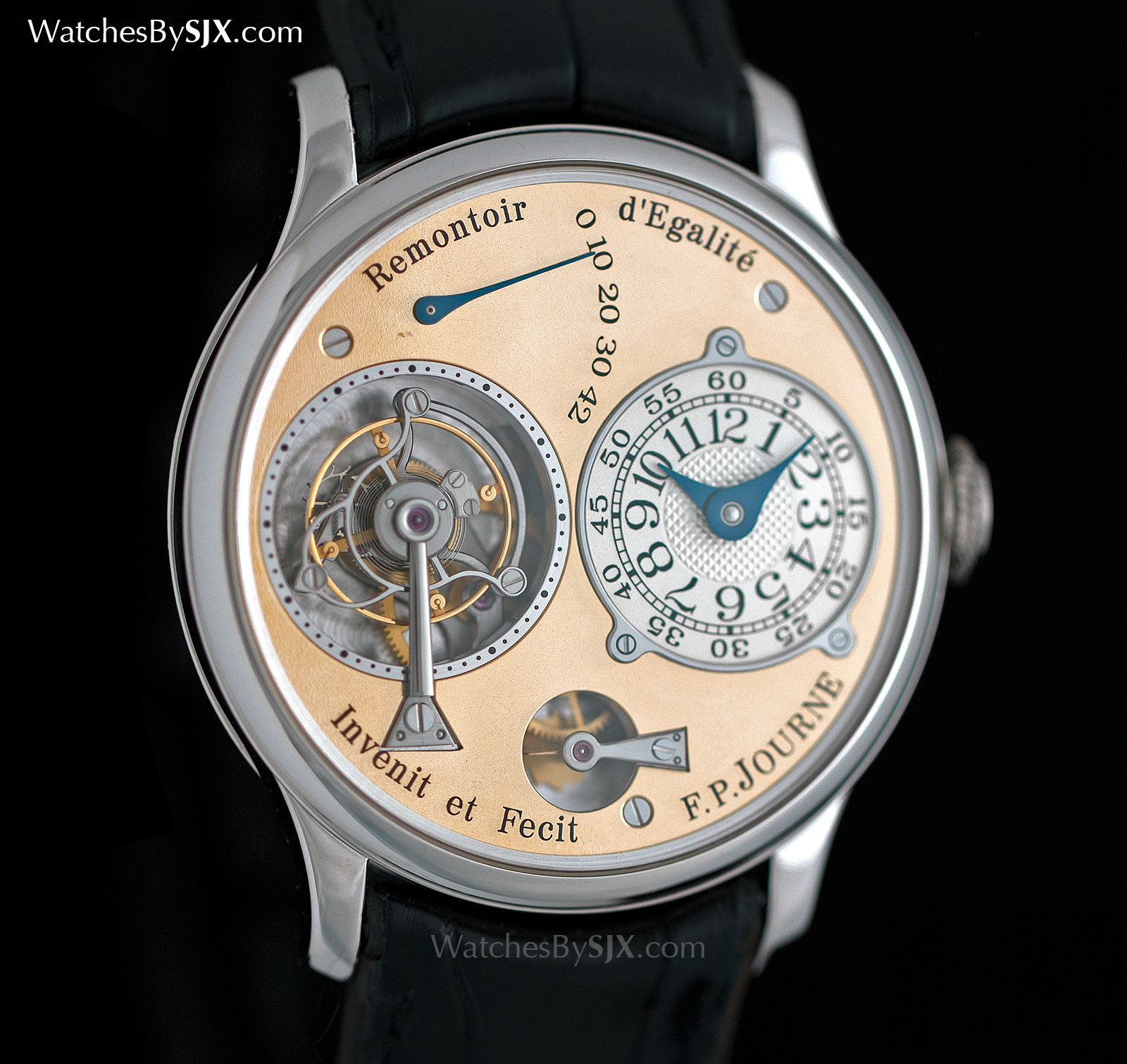 Introduced in late 1999, the F.P. Journe Tourbillon Remontoir d’Egalite was the first ever wristwatch tourbillon with a constant force mechanism. In production for just under five years, from 1999 to 2004, with about 350 produced, including the 99-piece ruthenium limited edition. There are four distinct generations of the watch, each of which differs from the other in its details, despite being similar visually. This is a third generation watch with the desirable “shiny” gilt dial.

The very first watches were the 20 subscription pieces F.P. Journe produced for his earliest clients, each of which was numbered “XX/20” on the dial at one o’clock. Then came the second generation watches that had the distinctive feature of a rounded cock for the remontoir, similar in form to the tourbillon bridge.  And then comes the third generation, pictured here. It has character, just like the other early F.P. Journe watches, which is to say the finishing is not perfect but still charming nonetheless. This specimen has the classic gold dial and platinum case combination that’s quintessentially Journe; the case is 38mm in diameter, the size of all early Journe watches but now discontinued in favour of 40mm or 42mm). Known to collectors as a “shiny” dial (in contrast to the later dials that were more matte), the dial is a pale champagne colour with a very fine grained texture (click on the dial close-ups below to see it). It’s reflective, giving it a varying tone depending on the light. The sub-dial for the time is screwed onto the dial with a frame and three screws, an aesthetic derived from the first prototypes F.P. Journe made which had the sub-dial screwed directly onto the base plate, which was solid yellow gold. Though subsequent watches like this one had gilt dials, the separate sub-dial in a frame was retained.

But as is common with the early dials, this has acquired a patina over time, with areas of discolouration, especially around the edges. Up close the printing of the dial on the dial is also lacklustre. And the cut-out for the base of tourbillon bridge and remontoir cock are irregular, but again it gives character.

The finishing of the tourbillon is attractively done, with a polished, rounded bridge and a cleanly executed cage. Because the tourbillon is large, and sits high up relative to the base plate, it appears to float ever so slightly above the movement. Over on the back the view is plain, with a full bridge that covers all of the movement, except for an opening that reveals the blade spring of the remontoir. Rewound every second, this spring keeps the escapement under constant tension, even when the mainspring is winding down. Another detail unique to the second and third generation tourbillons is the engraving on the case back, where the letters are outlined rather than engraved as they are now. The bridge and base plate are both rhodium-plated brass, something F.P. Journe abandoned in 2004 when the brand switched to rose gold for all its movements.

All the current generation F.P. Journe calibres feature bridges and base plates in 18k rose gold. Beyond the material, the current generation of movements have more refined decoration, something most obvious on the Historical Anniversary Tourbillon T30. Yet the early pieces like this one have a je ne sais quoi that is absent in the later pieces, despite them being more more ably put together.