Back in 2008 Vacheron Constantin introduced the  Quai de l’Île, am ambitious wristwatch with a complex, 10-part case that could be customised with each component in a different metal. And the multi-level dial was made of sapphire featuring metal appliqués and security features adopted from passports including micro-printing and invisible ink. Launched with much fanfare – the watch even came with a paper passport doubling as a warranty booklet – the Quai de l’Île was expensive, complex in a manner that was hard to understand and sold modestly.

Now Vacheron Constantin has stripped the Quai de l’Île of many of its intriguing but superfluous features, distilling it to the essentials and making it more affordable. The new Quai de l’Île is in stainless steel, and retains many of the recognisable design elements of the original.

The 41 mm case is the same cushion shape, but constructed in a simpler manner with the lugs being part of the case middle instead of separate, screwed-on components. A similar rationalising has been applied to the dial: it keeps the same Arabic numbers that distinguished the original, and the streamlined style improves its legibility. While the original had an exposed date disc, the new steel Quai de l’Île has a fixed date disc made of clear mineral crystal (no more sapphire) with a triangular pointer that travels round the dial.

Inside the new Quai de l’Île is the self-winding calibre 5100/1 that has a 60-hour power reserve and is hallmarked with the Geneva Seal. The movement is practically identical to the calibre 5100 inside the Overseas ref. 4500V introduced at SIHH 2016, except it lacks the luxury of a solid gold rotor. 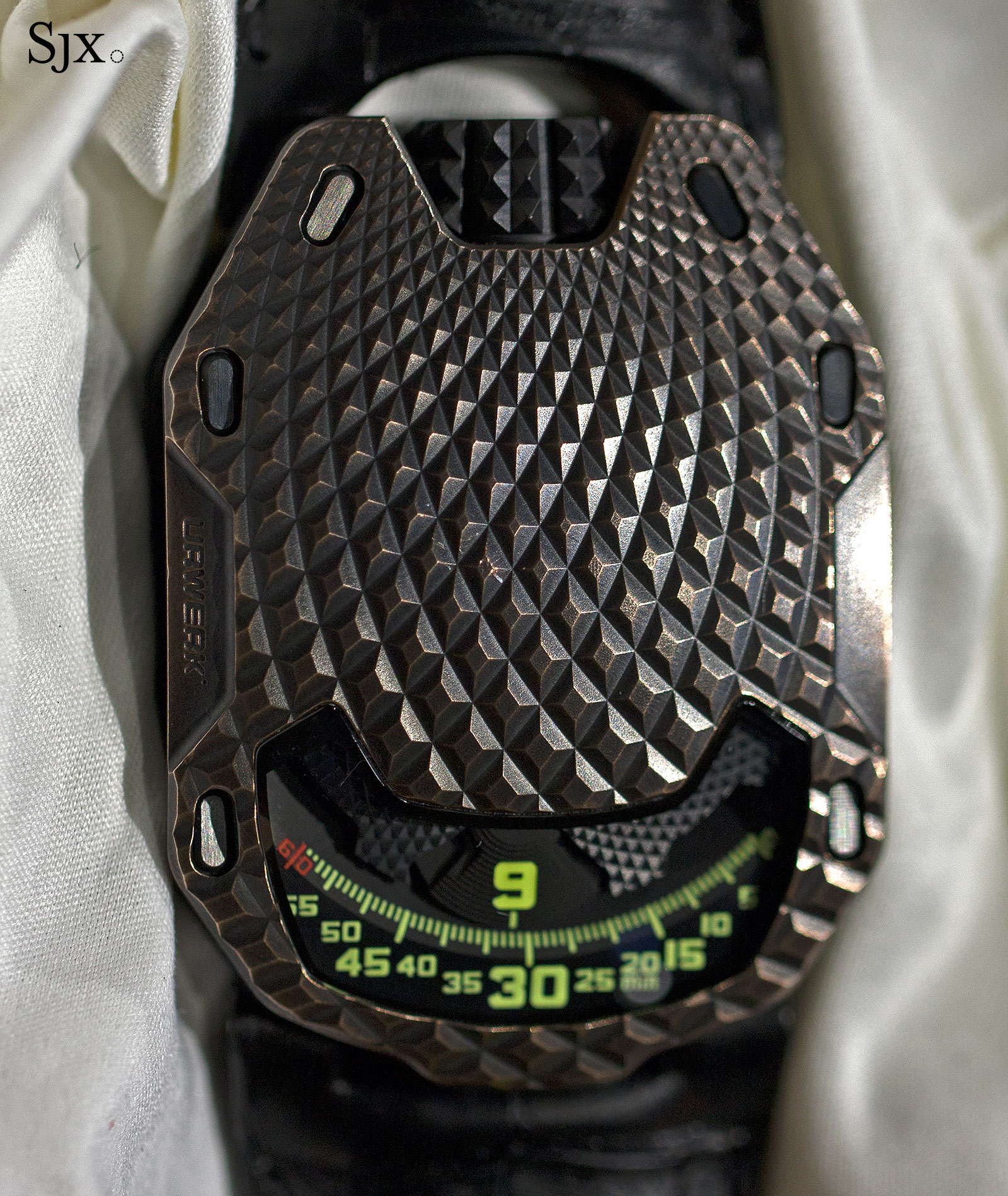 Fans of Urwerk will remember the UR-103 as the watch that put the watch on the horological map. It reproduced the centuries old wandering hours complication, but inside a case that was remarkably avant-garde for the time. The time was shown along a narrow window on the bottom edge, leaving the rest of the case a blank canvas for engraving. With the UR-105 T-Rex the brand returns to that original design with a remarkably striking watch. While recent Urwerk watches have tended towards the gadgety, with numerous gauges and scales all over the case, the T-Rex is minimalist, at least from a functional point of view. The time is displayed – in vivid yellow-green Super-Luminova – along a small “U” shaped window. As is traditional for the wandering hours complication, the hour numeral points to the minutes as it travels clockwise along the minute track. The rest of the case is impressively machined with a raised hobnail pattern that evokes the leathery hide of an ancient reptile, explaining the name. It’s made of bronze – the first time Urwerk is using the fashionable alloy – that has been finished multiple times to give it an aged look. The result is something that would look perfectly at home as a prop on Game of Thrones. Even more fearsome is the crown, which is very large and covered in spikes, looking like a miniature club; a pleasingly aggressive detail that looks perfectly at home. Turn it over and the look is more conventional, with the same case back as the standard UR-105. Made of titanium with a black ceramic coating, the case back has two key features. The first is the winding speed lever that goes from “Full” to “Red” to “Stop”. This controls the automatic winding, with “Full” allowing it to wind at maximum efficiency, “Red” short for reduced efficiency, while “Stop” halts the winding mechanism. The logic behind it is to optimise the winding based on the wearer’s physical activity: a motionless paper pusher should have winding set to “Full” to ensure the watch is wound despite his indolence, while a warrior brandishing a bloodied, spiked club can do with “Red” since rampaging all over the battlefield does wonders for winding the mainspring.