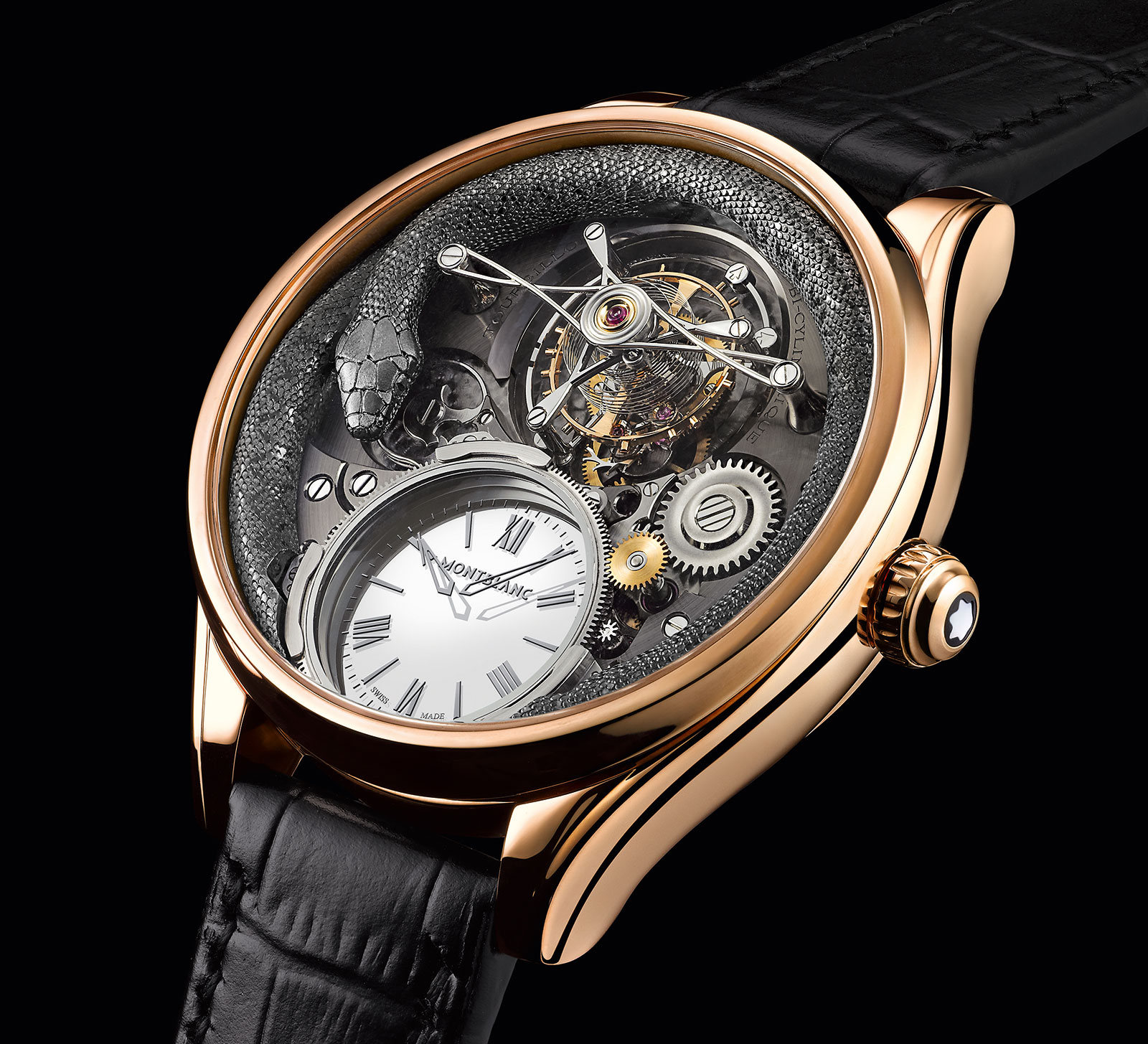 A frequent motif on early 20th century fountain pens, typically forming a serpentine clip or in the form of a metal overlay on the pen body, the snake is the principal theme of Montblanc’s 110 Years Anniversary collection, a line-up that includes watches, pens and leather goods. The flagship anniversary product is the Collection Villeret Tourbillon Bi-Cylindrique 110 Years Anniversary, featuring a very large tourbillon regulator and equally large serpent coiled around the dial.

The snake theme originates with the Rouge et Noir series of pens introduced in 1909, the very first pens made by Montblanc. Named after Stendhal’s novel about an ambitious young man’s rise and fall, the Rouge et Noir pens were available with the option of a slip-on snake pocket clip, like other pens of the time. Though not unique to Montblanc, the snake clip is synonymous with the brand today because of the successful Agatha Christie limited edition pen of 1993 that had the same serpentine clip. Consequently the snake has slithered its way into all of Montblanc’s 110th anniversary collection, including the hand-engraved, anthracite-coloured serpent that frames the dial of the Tourbillon Bi-Cylindrique. Made by Minerva, the high-end watchmaking workshop of Montblanc, the watch gets its name from the double cylinder-shaped hairsprings of the tourbillon, one sitting inside the other. Each hairspring breathes opposite to the other, giving the oscillator better symmetry and concentricity. Consequently, the balance has better isochronism, beating in the same manner regardless of the position of the watch or its power reserve. The other notable feature is the mystery time display: the hour and minute hands are metal arrows deposited onto clear sapphire discs, leaving them floating in midair, suspending over the mirrored base of the dial. Like all mysterious time displays, the sapphire discs have toothed rims which are connected to gears that drive them. Because the Tourbillon Bi-Cylindrique has an open-worked dial, the mystery display mechanism is visible, taking away the mystery but offering a clear view of the novel mechanism. And like all other movements made by Minerva, the calibre is finished by hand in a traditional manner to a high standard, some exemplified by the slim, polished and rounded tourbillon bridge.

The Collection Villeret Tourbillon Bi-Cylindrique 110 Years Anniversary is a limited edition of three watches, with a price tag of €280,000, equivalent to US$315,000. Fortunately the 110 Years Anniversary collection also includes more affordable items, including a series of snake pens as well as accessories like tie clips and cufflinks. And the range also includes a one-off steamer bag with painted decoration. The one of a kind 110 Years Anniversary steamer bag The 110th anniversary pen line-up is diverse, with the most basic being the Heritage Collection Rouge et Noir in black or coral-coloured resin and lacquer. These start at US$410 for the ballpoint pen in black, rising to US$780 for the coral fountain pen.

Looking very similar is the Heritage Collection Rouge et Noir Limited Edition 1906 – identical in design to the resin model but made of matte black ebonite (vulcanised rubber), with rubies set into the eyes of the snake. This is limited to 1906 pieces each for the fountain pen and rollerball, priced at US$1825 and US$1620 respectively. There are additional limited edition pens featuring with solid gold snake overlays, including a one-off pen with a rose gold overlay set with diamonds priced at €1.2 million.

Cufflinks start at US$440 for the sterling silver pair; solid gold versions are also available. 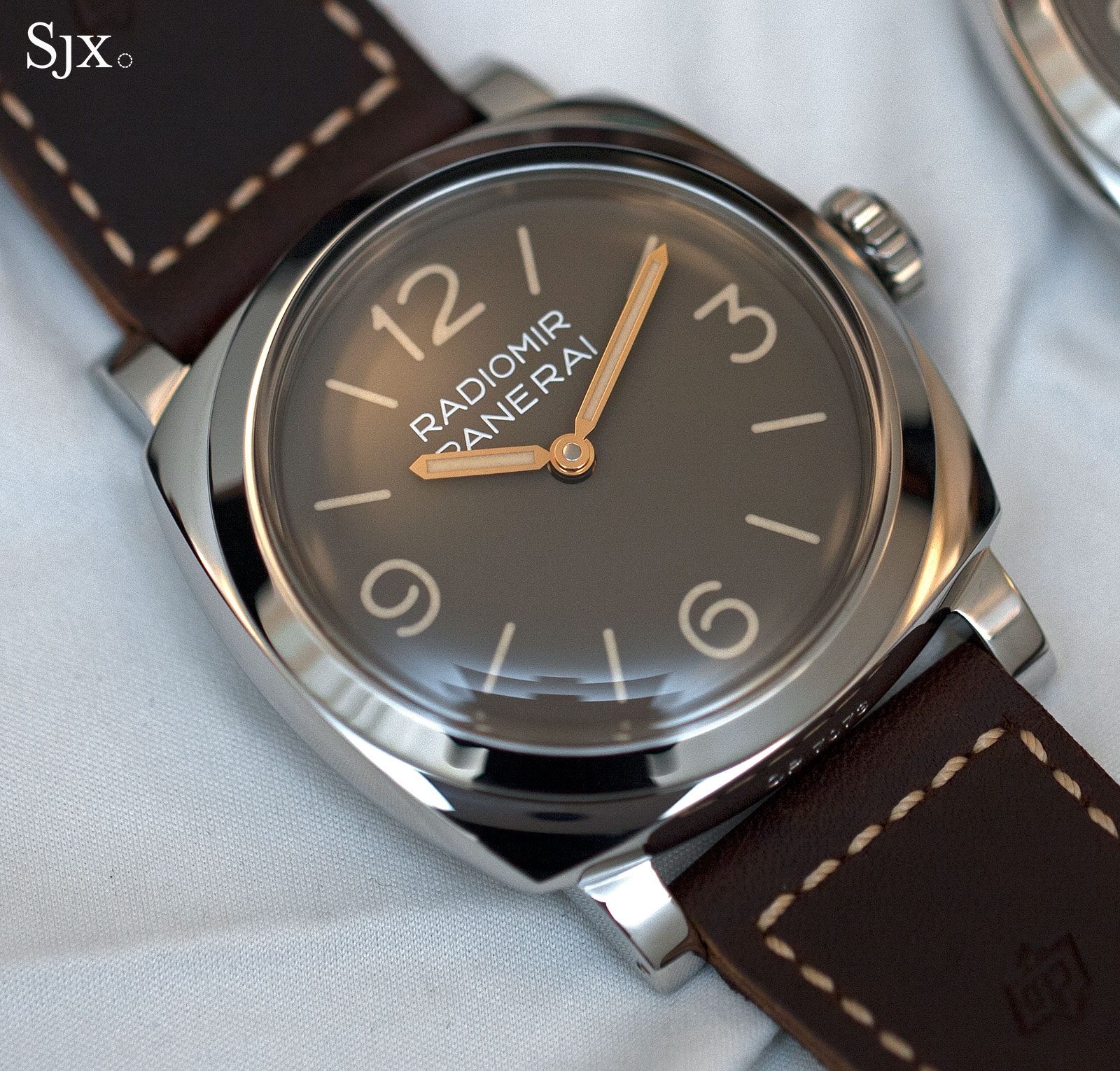 “Tropical” is the nickname given to vintage watch dials that have faded from black as they were when they left the factory, to varying shades of brown. One reason for the change in colour is the breakdown of the colour pigments due to ultraviolet radiation in sunlight, hence the moniker. Panerai’s latest historical remakes takes inspiration from such tropical dials, with both the Radiomir 1940 3 Days Acciaio PAM00662 and Luminor 1950 3 Days Acciaio PAM00663 fitted with grey-brown dials that do a convincing job of approximating a vintage patina. While the recent Luminor 1950 Titanium DLC Special Editions took liberties by mixing and matching elements from historical watches, the tropical Special Editions (what Panerai calls its limited editions) are more kosher. The first of the pair is the Radiomir 1940 3 Days Acciaio PAM662, featuring the transitional case design modelled on the Egiziano Piccolo ref. 6154, a 1940 timepiece that was the bridge between the wire-lug Radiomir and subsequent Luminor with the signature crown lock mechanism. Essentially a variant of the PAM587 from two years ago, the tropical PAM662 plays its role well, with various details appropriated from vintage models, including the gilded pencil hands and engraved lettering on the dial. The case is stainless steel and 47 mm in diameter, a largish size that’s same as that on vintage Panerai watches. While historically correct, the size is too much for many to swallow, hence the smaller Radiomir 1940 models.

Identically sized, the second tropical edition, the Luminor 1950 3 Days Acciaio PAM663, features the exact same dial and hands, save for the lettering on the face. Unsurprisingly, the look has a similar effect, though the crown lock mechanism gives it a little extra appeal, being so synonymous with the brand. While the look is a careful recreation of an old look, the movement is the second generation P.3000. Hand-wound with a three day power reserve, the P.3000 is Panerai’s basic in-house movement that’s a replacement for the outsourced Unitas calibre that used to be found in most Panerai watches. The balance wheel is held by a full bridge, a feature common to many Panerai movements.

While fundamentally the same as the first generation, the new P.3000 has twin bridges for the gear train, instead of the single bridge of before. And the shape of the barrel bridge (the largest, occupying half the real estate on the back) has been tweaked to give it more more detail. The overall look is more appealing, since the bridge shapes are more complex and offer more detail.

How special are Special Editions?

While both tropical editions are appealing watches (and the new P.3000 is a bonus), ticking all the boxes on a Paneristi’s checklist, the pair are the latest in a lengthy line of historical remakes, many of which were also limited editions in their own right. And because Panerai is wont to reuse details from Special Editions that sell well on models in the regular collection (think composite case, California dials and so on), the once rabid enthusiasm for such watches has tapered off.

Be that as it may, the tropical watches are available for not that much more than the equivalent regular models, and compared to Panerai Special Editions of the past, much more easily available.