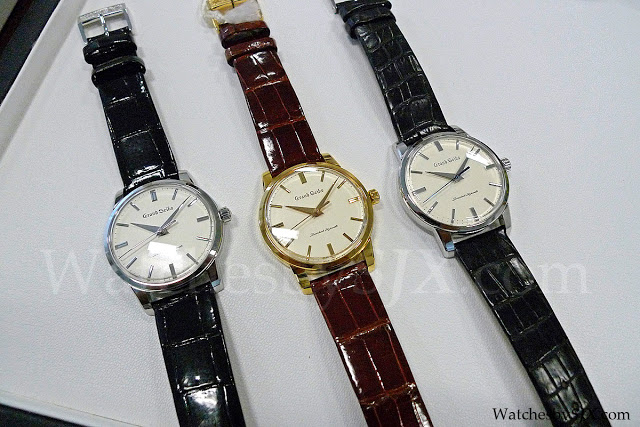 I wrote about these in an earlier post but recently had the chance to see the whole collection in person, save for the Credor minute repeater, at Seiko Watch Corp. office in Tokyo. The crowd favourite, and also my personal preference (I will have one on my wrist by August hopefully), is the 130th anniversary Grand Seiko hand wind models, in steel, platinum and yellow gold (refs. SBGW033, SBGW039 and SBGW040 respectively). 1300 pieces in steel, and 130 each in gold and platinum.

(Update Oct 2011: I just received the steel edition SBGW033 and these are my initial impressions. In short I love it.)

Of the three I like the steel and yellow gold best. The platinum looks slightly dull and monochrome, while the steel has a beautiful blued steel seconds hand that is perfect. And the yellow gold looks perfectly vintage. Interestingly the dial colour of all three are not identical – the steel has an ivory tone on the dial while the platinum is silver, and the gold in somewhere in between.

All three have a case diameter of 35.8 mm but do not look that small because of the thin bezel and white dial.

You will notice the lack of text on the dial, and also the lack of the GS and Seiko logo. This is a deliberate attempt to recreate the look of the original GS. Seiko has done a brilliant job, right down to the relief buckle which is identical to that on the vintage version. I loved the domed sapphire crystal as well.

Mechanically the GS limited edition differs from the regular GS as well. It contains the new 9S64 movement with three day power reserve. In addition, the mainspring and balance spring of the movement are made from alloys developed by Seiko, while the skeletonised lever and escape wheel are made using an etching technique similar to that used to make silicon wafers. More photos of the GS 130th anniversary collection can be seen at the end of this post. Another watch I liked, and had not come across until now, is the Seiko Ananta Brightz NS_Concept (ref. SAEC013) limited edition designed by Naoki Sakai. He’s a well known Japanese industrial designer who has worked for Seiko before, as well as Nissan and Olympus. A limited edition of 1000 pieces, it is steel with a black hard coating (DLC possibly?) and the automatic 6R21 movement. Also new is the Ananta Automatic Chronograph Diver’s watch (Ref. SAEK015 or SRQ013), launched for the 130th anniversary. The Kanazawa urushi dial is a deep, glossy black and is beautiful. However, the case and dial design are not to my taste. The black PVD case with pink gold accents looks a bit common and inexpensive; a dial like that deserves better in my opinion.

I was also shown a few new models from the Premier, Sportura and Ananta range. All well made and terrific value for money, if a little uninspiring. Many thanks to my good friends at Seiko for showing me the collection.