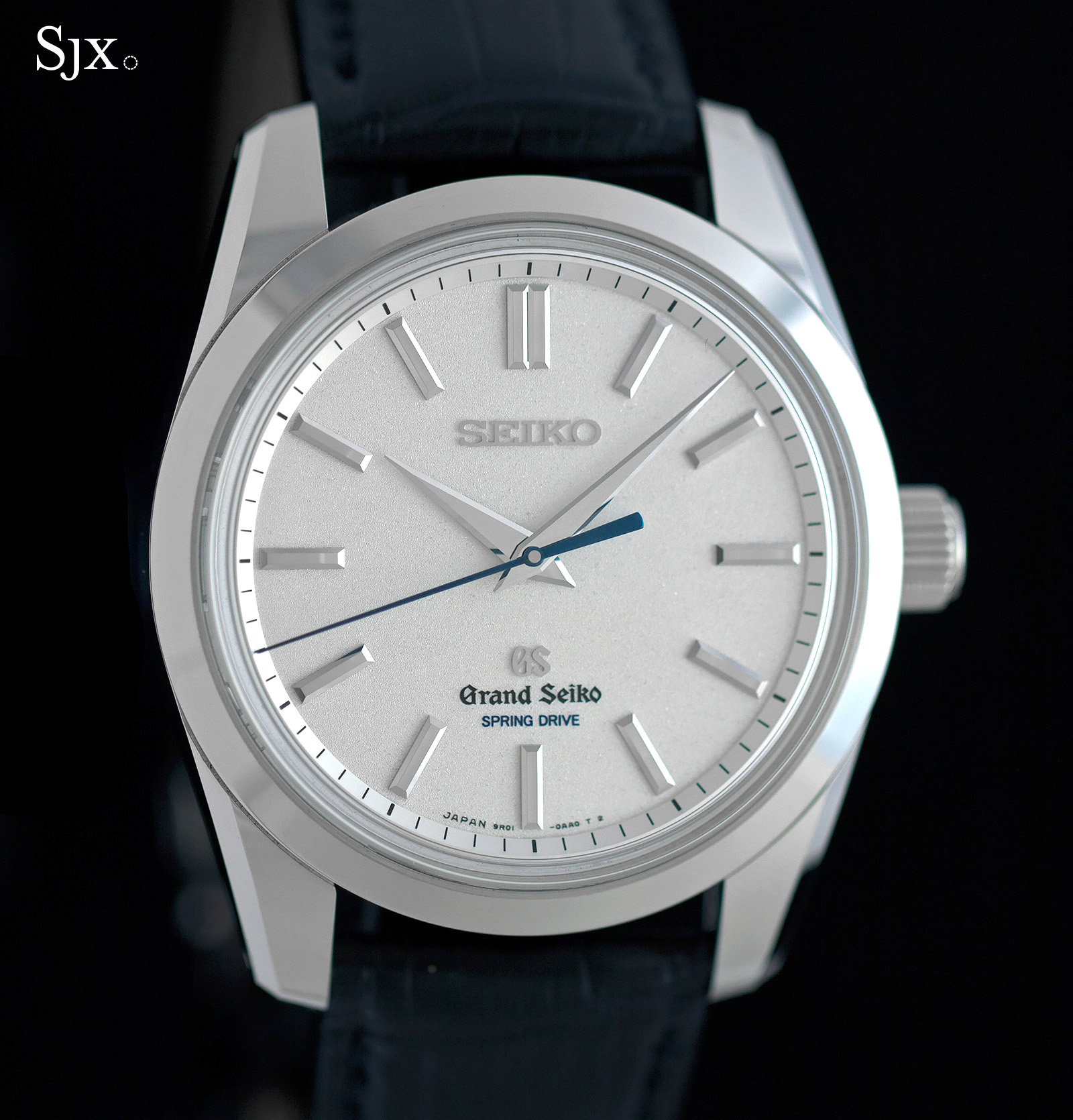 The flagship Grand Seiko at Baselworld 2016, the Grand Seiko Spring Drive 8 Day Power Reserve (ref. SBGD001) is powered by a brand new movement, the calibre 9R01 that boasts a 192-hour power reserve. But more importantly it has been finished to a remarkable degree, both inside and out. The movement decoration is executed by Seiko’s elite watchmakers of the Micro Artist Studio, the same workshop responsible for the Eichi, Credor Minute Repeater and Sonnerie, while the case is made from a proprietary platinum alloy developed for this watch. Seiko’s first eight day movement, the calibre 9R01 is hand-wound with three large barrels and a power reserve indicator on the back. The barrels unwind simultaneously at a third the speed of conventional barrels, providing a lengthy and even delivery of power.

Because the three barrels are substantial, the movement is 37 mm in diameter – that’s the same size as the entire watch case of other Grand Seikos  – meaning the watch itself is a chunky 43 mm. That is extremely large by Grand Seiko standards and will surprise traditional fans of the Grand Seiko.

Like the other movements made by the Micro Artist Studio in Shiojiri, near Nagano, the new eight day calibre is a Spring Drive, meaning it contains a flywheel regulated by an electromagnet that serves as the regulator of the watch. Thanks to an integrated circuit that governs the regulator (everything else besides this is mechanical), the 9R01 keeps time to within 10 seconds a month. Beyond the technical details, what makes the movement special is its outstanding finishing. Made of rhodium-plated German silver, the single bridge is straight grained with gorgeous polished bevels on the upper edge which mimics the profile of Mount Fuji, while the exposed flywheel represents the sun peeking over the mountains.

Similar effort is lavished on the countersinks for the jewels and screws, which are all blued by hand. Though the shape of the bridge is not as complex as that of the Eichi which has several bridges and consequently more complex finishing, the eight day calibre is still top class. The case style is similar to other Grand Seiko watches, but the resemble is only visual. It is made of a special platinum alloy proprietary to Seiko that was conceived for this watch. Ordinary platinum is soft and sticky, meaning polishing the surface to a hard shine like that of stainless steel is impossible.

In contrast, the alloy developed for the Grand Seiko eight day can be polished with the zaratsu technique. An ancient method of polishing samurai swords or katana, zaratsu is applied to all Grand Seiko cases and creates an extremely smooth, mirror-like surface with minimal distortion. And to increase the hardness of the metal, the case is cold forged with a press weighing several tonnes, a process that increases the density of the metal.

Frosted to create a sparkling, granular finish, the dial is nicknamed “diamond dust” for the way in which it catches the light. It is not actual diamond powder, rather the look is the result of a unique process that combines special plating, sandblasting and polishing.

Typical of Grand Seiko watches the hands and indices are diamond-cut, giving them razor sharp facetted edges that catch the light brilliantly. While most of the watch is monochromatic, the seconds hand is blued steel with a curved tip that is rolled by hand. And the dark blue of the seconds hand is echoed in the “Spring Drive” text at six o’clock. The Grand Seiko Spring Drive 8 Day Power Reserve (ref. SBGD001) is part of the regular collection and will be available starting June at select Seiko stores worldwide, including the Seiko boutiques Tokyo, Paris and New York. In Japan it retails for ¥6 million before taxes, equivalent to US$54,000.