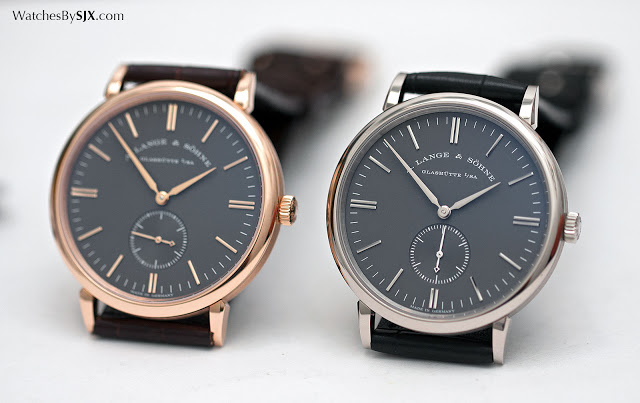 A. Lange & Söhne is beloved for its beautifully made watches that exude quality. But beautiful as they are, Lange watches are mostly often complicated and consequently expensive, sometimes extraordinarily so. Fortunately, the German watchmakers does think of the less well heeled, with the Saxonia Boutique Edition, the most affordable wristwatch in its line-up.

The Saxonia is a clean, time-only wristwatch with a hand-wound movements, as no frills as a luxury wristwatch can get. With a diameter of 37mm, it’s available in white or rose gold, with the same grey dial in either metal. Visually the rose gold Saxonia has a slight edge over its white gold counterpart, since it has more contrast and colour. 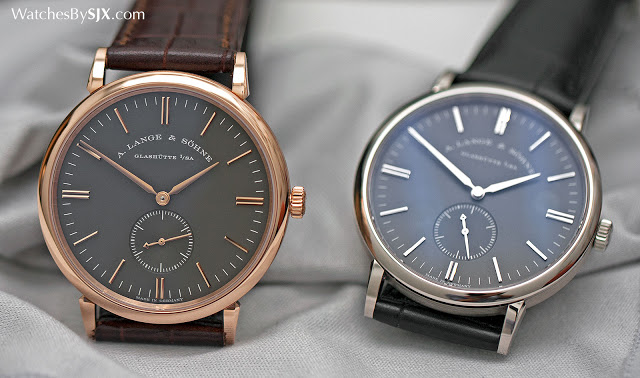 The dial is legible and functional, with the baton hour markers that are the trademark of the Saxonia line watches, as well as lance-shaped hands. It’s a handsome, albeit restrained look. Plain is perhaps too harsh, but the Saxonia design is certainly not arresting or notable. 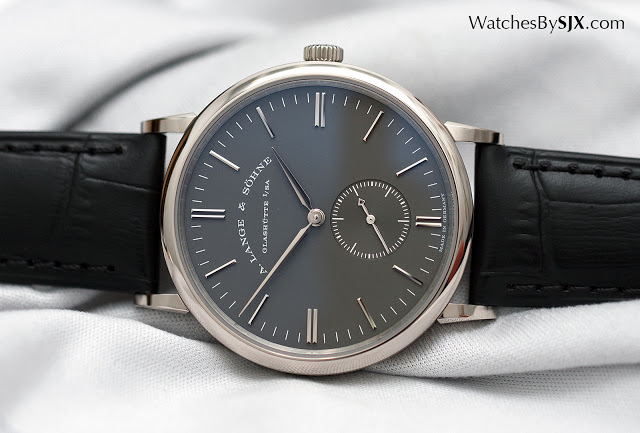 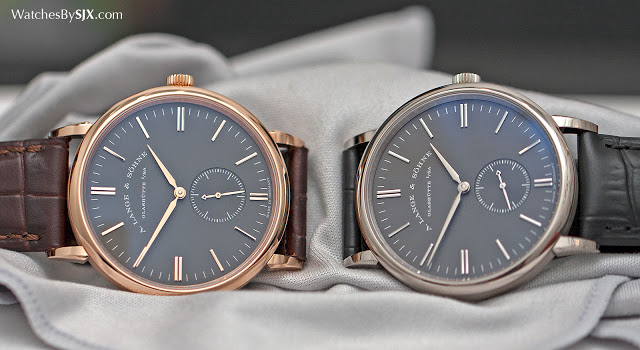 But what it lacks in looks it makes up for with a tangible feel of quality. Despite being a compact watch at 37mm in diameter, the Saxonia still retains the feel that characterises Lange watches, one of dense quality in the hand.

Not aged a day in twenty years

Turn it over and the feeling of quality gets a visual confirmation. Most likely the primary reason the Saxonia is affordable compared to other Lange watches is the L941.1 movement inside. Now the oldest movement Lange currently uses in any of its watches – a year ago that distinction would have gone to the first generation Lange 1 – the L941.1 was developed in 1994 (the first two digits of the calibre number indicate the year it was created). 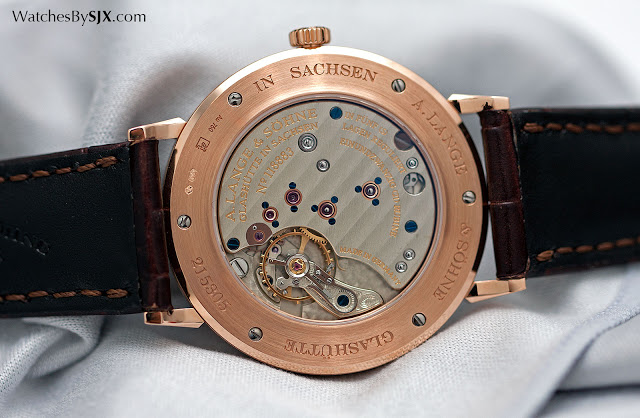 It’s a smallish movement originally conceived for the first 1815 wristwatch, which was fittingly the entry-level Lange in the 1990s. Since then the 1815 has matured into a mid-tier timepiece that’s more costly and elaborate, like the recent honey gold 1815. 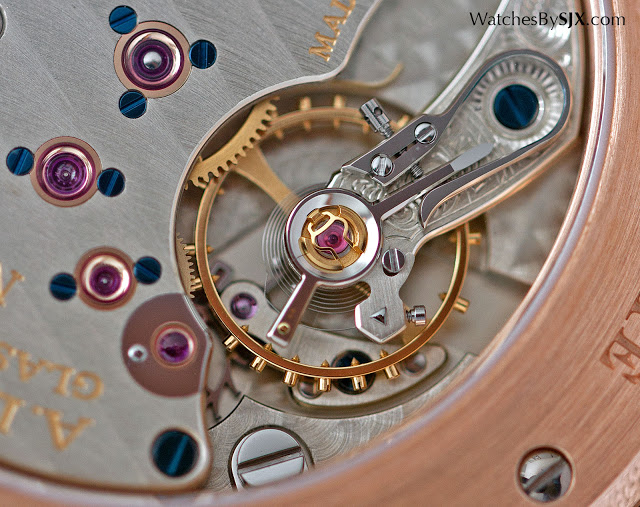 Though long in tooth, the L941.1 does what it’s supposed to do, and looks good while doing it. The movement has all the hallmarks of a modern Lange movement, including the three-quarter plate, engraved balance cock as well as jewels in gold chatons secured by blued steel screws. In fact, it has four jewels in chatons, a count that would probably be smaller for a newly developed entry-level movement since such fancy details are expensive and serve no purpose except aesthetics. Naturally, the decoration on the movement is superb and a joy to behold. Much effort has been put into making a simple movement attractive, such that even small and little noticed parts are properly finished. At this price point Lange probably does the best movement finishing of any brand.

And the smaller alternative

The version of the Saxonia sold at retailers (who sometimes discount, unlike boutiques) has the same movement, and is similarly priced, but is only 35mm in diameter. That’s too small for most men by modern standards, while the 37mm boutique edition is a good size. Price-wise the 35mm is not too far off, being about 15% less than the larger Saxonia Boutique edition. 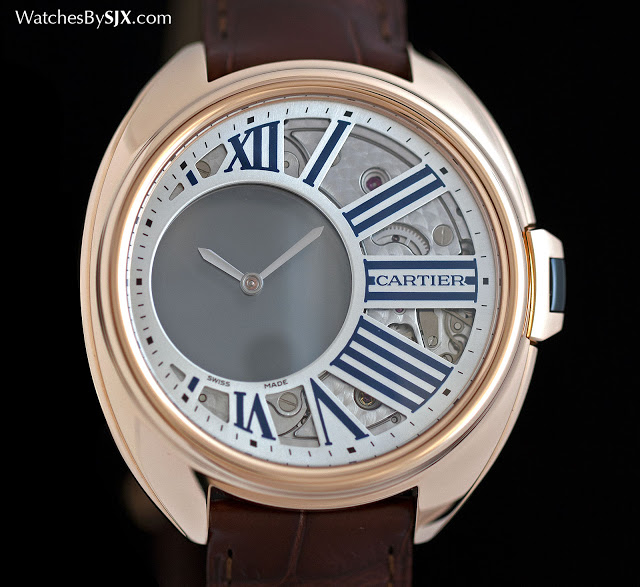 One of the most famous of Cartier’s timekeepers, the Cartier mystery clock made its debut in 1911 with the Model A. Almost completely transparent, being made of rock crystal, the Model A is arguably the quintessential mystery clock. Originally invented by a Parisian magician turned clockmaker in the 19th century, the mystery clock then evolved into the mystery wristwatch.

The Clé de Cartier Mysterious Hour operates on the same principles that have defined this genre of watchmaking. The hands are mounted on a pair of clear sapphire discs with teeth on their edge. Those teeth, which are hidden underneath the dial, mesh with the gear train of the movement. Thanks to mechanical contortions, the movement is crescent-shaped, compact enough to occupy less than half the space inside the case. Though simple, displaying only the hours and minutes, the movement is an ingenious construction. 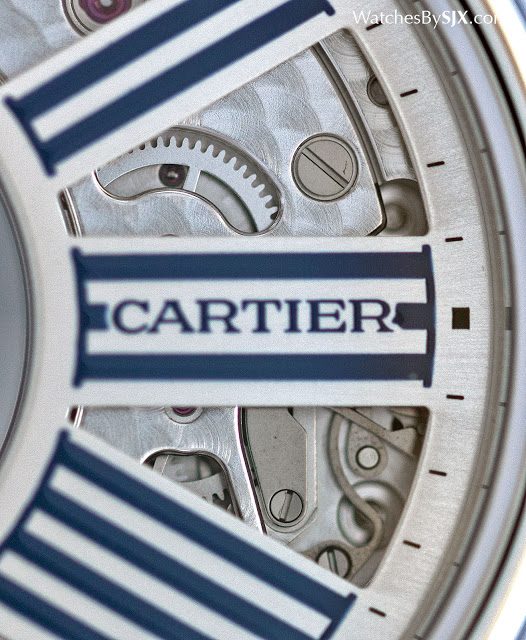 At 41mm in diameter, the watch is modestly sized but still notably bigger than the time-only version of the Clé de Cartier. Though the movement occupies most of the case, most of the movement footprint is taken up by the sapphire discs for the hands. Despite its small size, the hand-wound 9981 MC movement still manages a respectable 48 hour power reserve. 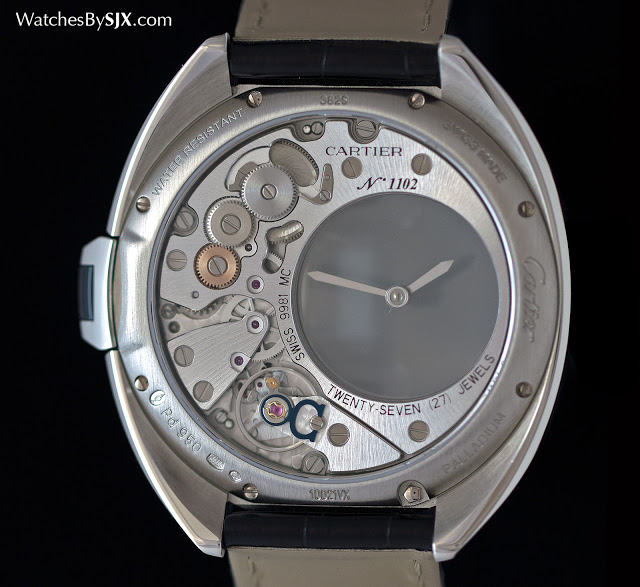 Up Close With The Cartier Rêves de Panthères, a Charming "Feminine Complication" (With Original Photos & Price)

Up Close With The Clé de Cartier, A Completely New Case Style With A Fresh, Entry Level In-House Movement (With Original Photos & Price)