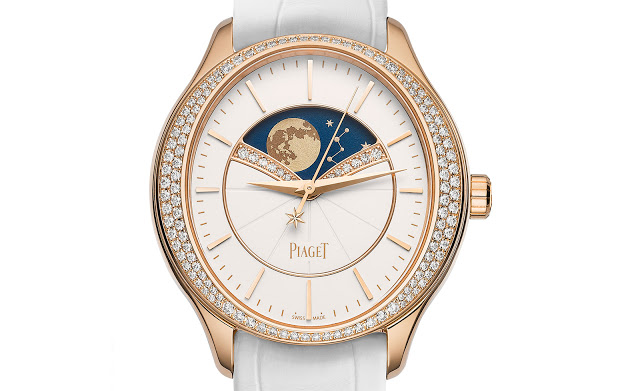 A ladies’ wristwatch with an extra-large moon phase display, the Limelight Stella is Piaget’s first complication watch developed from the ground up for the female wrist. Piaget is a jeweller and watchmaker, making both complicated watches as well as fine jewellery. But it has not had a complicated watch specifically for ladies, until now. The Limelight Stella is powered by a new movement featuring an oversized moon phase display, a complication that’s as much about aesthetics as it is about the mechanics. And it’s also the first ladies watch that’s been unveiled in advance of Watches&Wonders, the annual exhibition that takes place in Hong Kong in late September 2015. The moon phase disc is a deep blue with a realistic depiction of the moon, along with stylised constellations. And the counterweight of the second hand is a star. Fourteen diamonds set in a chevron shape underline the moon phase, with another 126 diamonds set on the bezel.

Though the case is round, the dial is oval, a subtle twist that is most apparent from the diamonds on the bezel. Set on two rows at both three and nine o’clock, the diamonds narrow to a single row at the top and bottom. The Limelight Stella is rose gold and 36mm in diameter, with the calibre 584P movement inside. It’s automatic with a 42-hour power reserve, and like most of Piaget’s other movements, developed and made in-house. The Limelight Stella is priced at S$42,700 including 7% tax, equivalent to US$30,000. 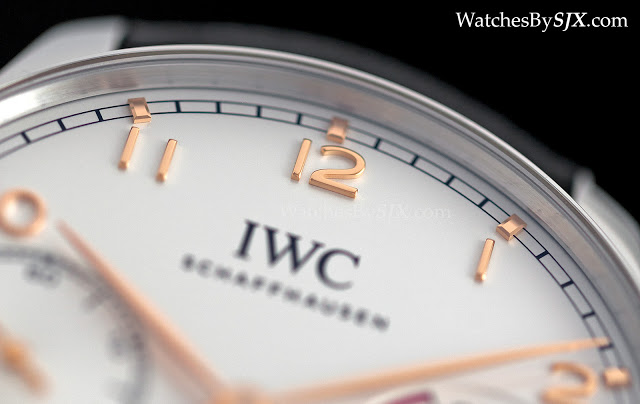 IWC will be the official partner of the 26th Singapore International Film Festival that takes place in the city state starting November 2015. Singapore‘s longest established cinematic event, the Singapore International Film Festival (SGIFF) concentrates on Asian films, particularly those from South-East Asia. In keeping with its practice of supporting key film festivals around the world, IWC is the official partner of the SGIFF, now in its 26th year. Running from November 26 to December 6, 2015, the SGIFF is organised by a non-profit that’s a registered charity. First held in 1987, the SGIFF is now the key film festival in the region.

The SGIFF is the sixth film festival IWC sponsors, a line-up that includes the Tribeca Film Festival (IWC recently unveiled the one-off Portofino watch created for the event) and the Beijing International Film Festival. IWC chief executive Georges Kern explains the brand’s affinity for the cinema, “The worlds of watchmaking and film have a lot in common, as they are both steeped in tradition and pioneering spirit… Films are about storytelling and so are IWC watches.”  More details on the SGIFF can be found on its website.