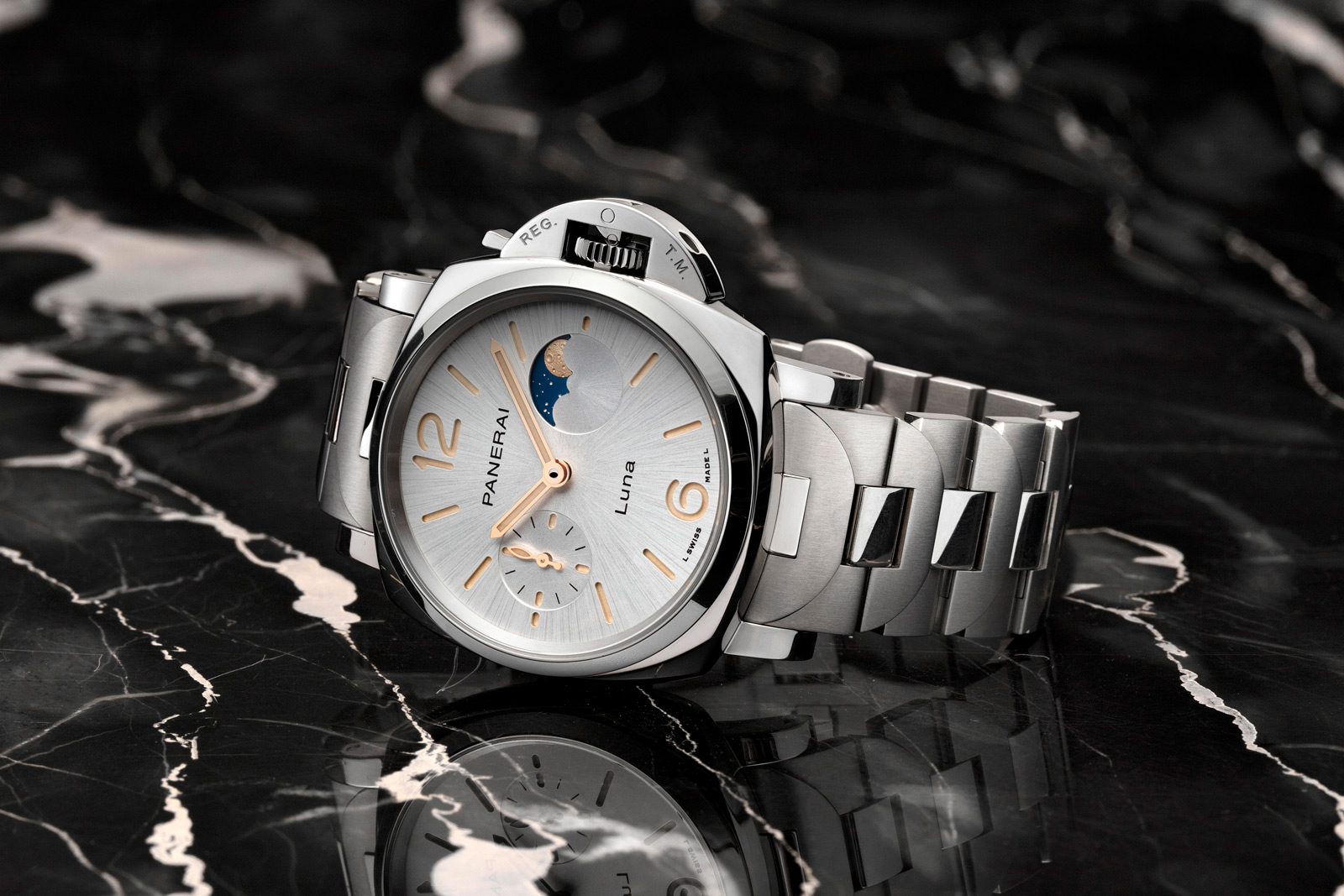 A compact take on the signature Panerai watch that made its debut in 2016, the Luminor Due is essentially a scaled-down version of the military-inspired original, which allows it to wear easily on smaller wrists. To date, the Luminor Due has remained minimalist, making do without complications save for a date display.

But now Panerai gone for something slightly more elaborate with the Luminor Due Luna that has a small seconds and moon phase display featuring a solid-gold moon disc. 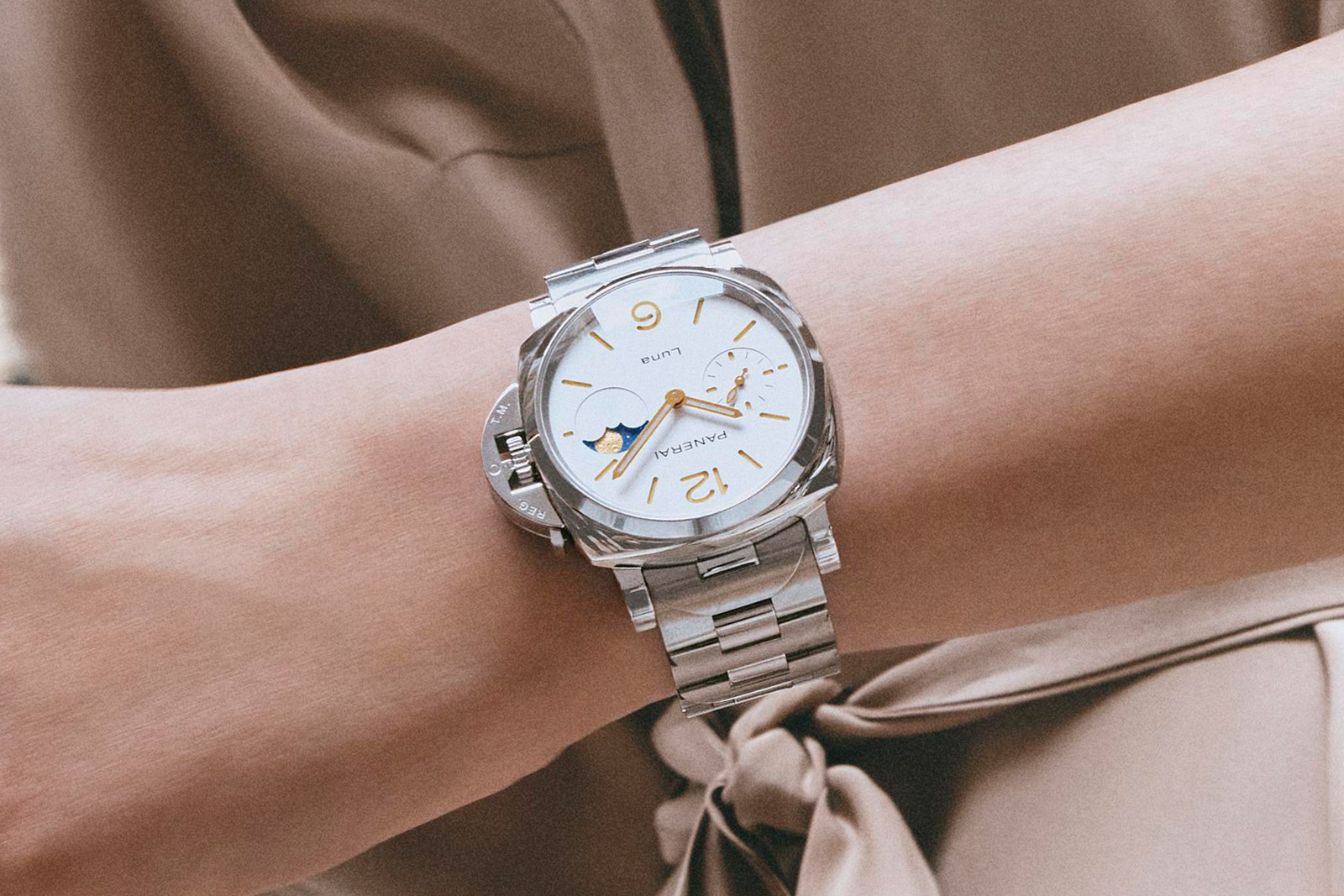 I like the compact size of the Due, as well as its more formal styling that allows it to double as a dress watch. Although the original, full-size Luminor is a clean, almost elegant design, its massive size and stark aesthetics means it can only be a military-style watch. The Due, on the other hand, manages to preserve the outline of the original Luminor while being modestly elegant.

For that reason, the new Luna is an appealing watch. At just 38 mm wide, it is clearly more wearable, while the engraved, solid-gold moon gives it a bit of sparkle. And the all-gold model comes along with a mother of pearl dial, making it even more luxe. 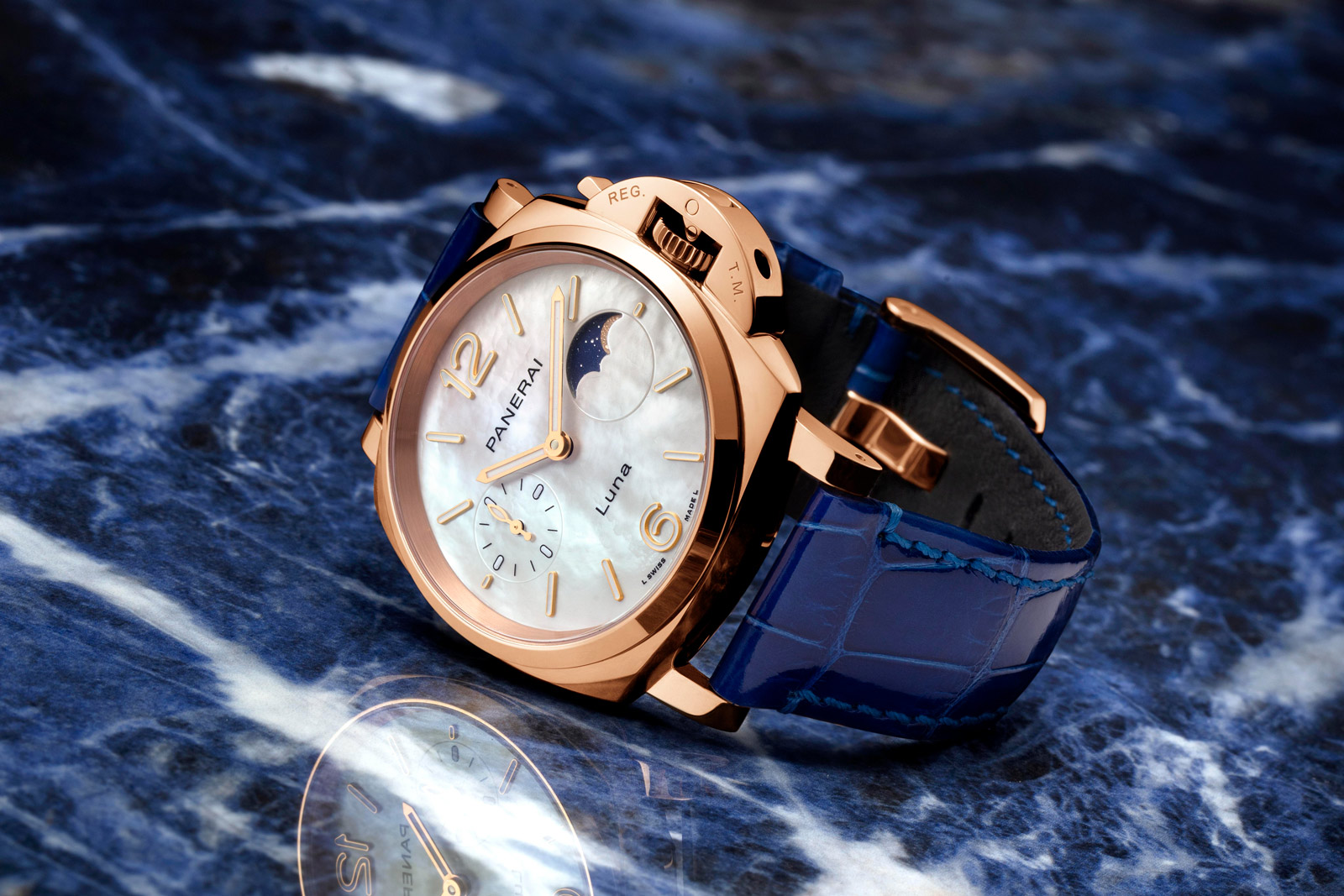 Interestingly, the Luminor Due is largely targeted at female clientele, but models have a masculine aesthetic. That continues with the Luna, which is available in steel with a metallic blue dial, a combination leaves it looking very much like a conventional men’s watch.

The dial design is largely classical Panerai, although the proportions seem a little off due to the small diameter of the dial. Both the hour markers and twin sub-dials feel too big compared to the case, giving the face an exaggerated aesthetic, though the layout was probably done with legibility in mind.

It’s worth pointing out the P.900 movement inside is an entry-level calibre used by several brands within Richemont in addition to Panerai. The movement is no-frills, but adequate enough considering the retail price of the Luna, which places it amongst at the affordable end of Panerai’s range of automatic watches.

Naturally, the Luna is clearly too fancy to be anything close to a traditional Marina Militare Panerai, so it is definitely something not for traditionally-minded collectors. But for someone who just wants the Panerai look without the large size or no-frills design, it is a useful alternative. 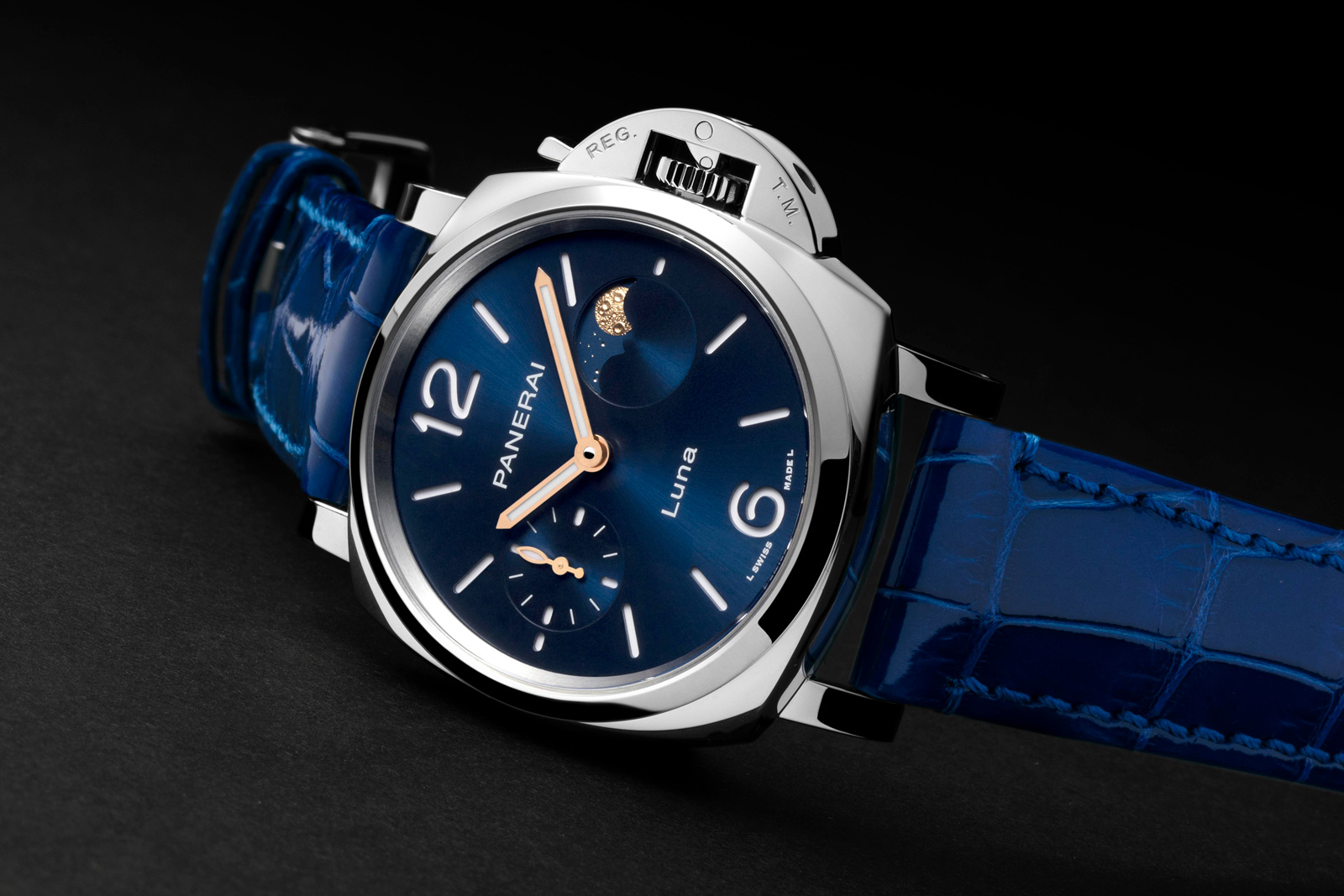 The Luna makes its debut with four variants, ranging from a base model in steel that has a “sun-burst” brushed dial to the top-of-the-line gold model with mother-of-pearl dial.

Notably, the steel model is also available with a matching bracelet in the trademark Panerai design. It’s made up of links modelled on the Luminor crown-lock bridge, which have brushed outer sections and polished centres. The weighty bracelet will certainly give the Luna more heft. 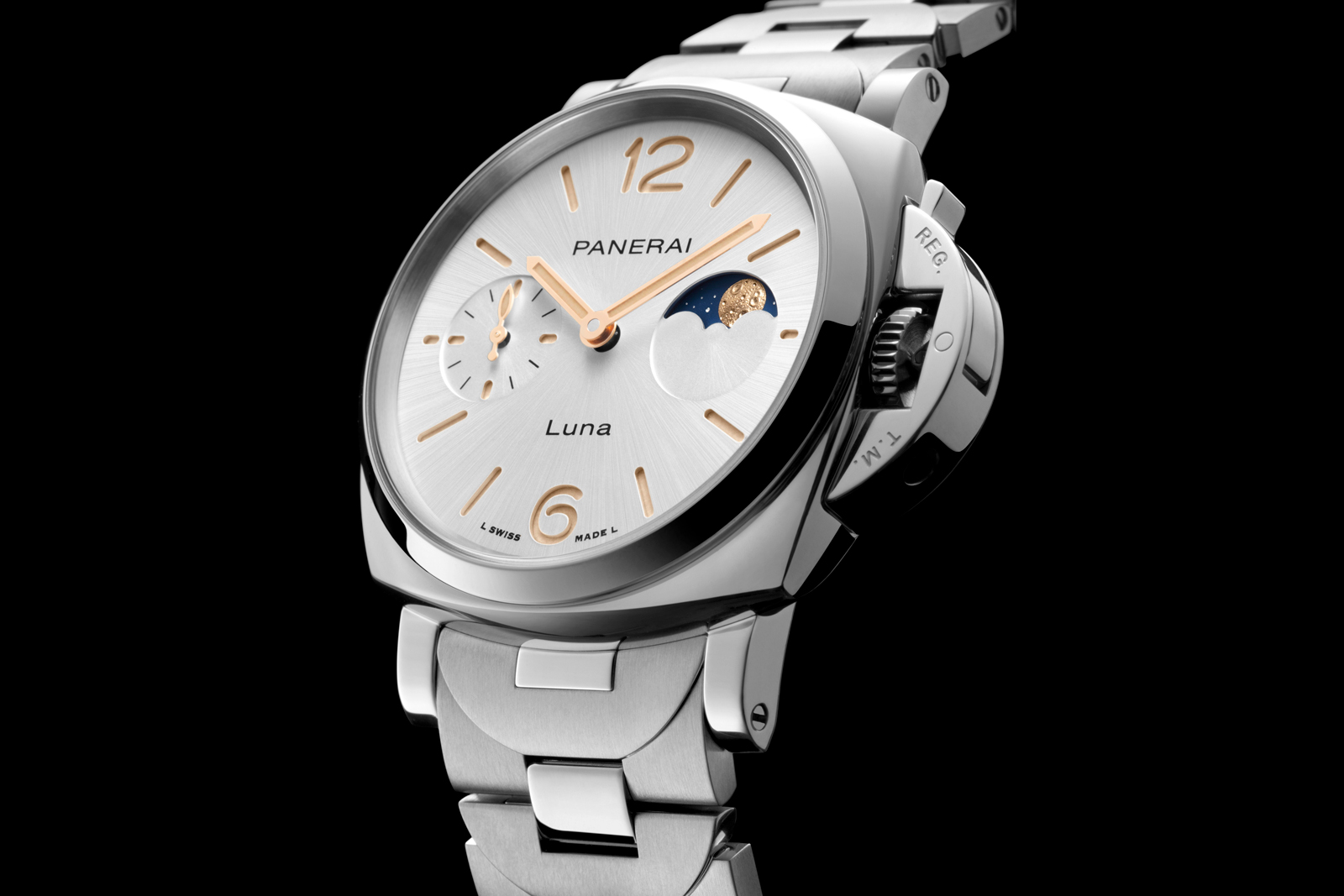 But the highlight of the Luna is the moon phase at three o’clock. Sitting within a traditional semi-circular aperture, the moon phase disc is a two-piece construction of a gold moon against the night-sky background. But the moon is actually a disc of solid, 24k gold that’s been engraved with dimples to reproduce the craters on the actual lunar surface.

The night-sky background, on the other hand, has a finely grained finish with scattered, engraved spheres that represent the stars. Though the stars are less elaborate than the golden moon, they are more unusual than the printed stars found on most moon phases. 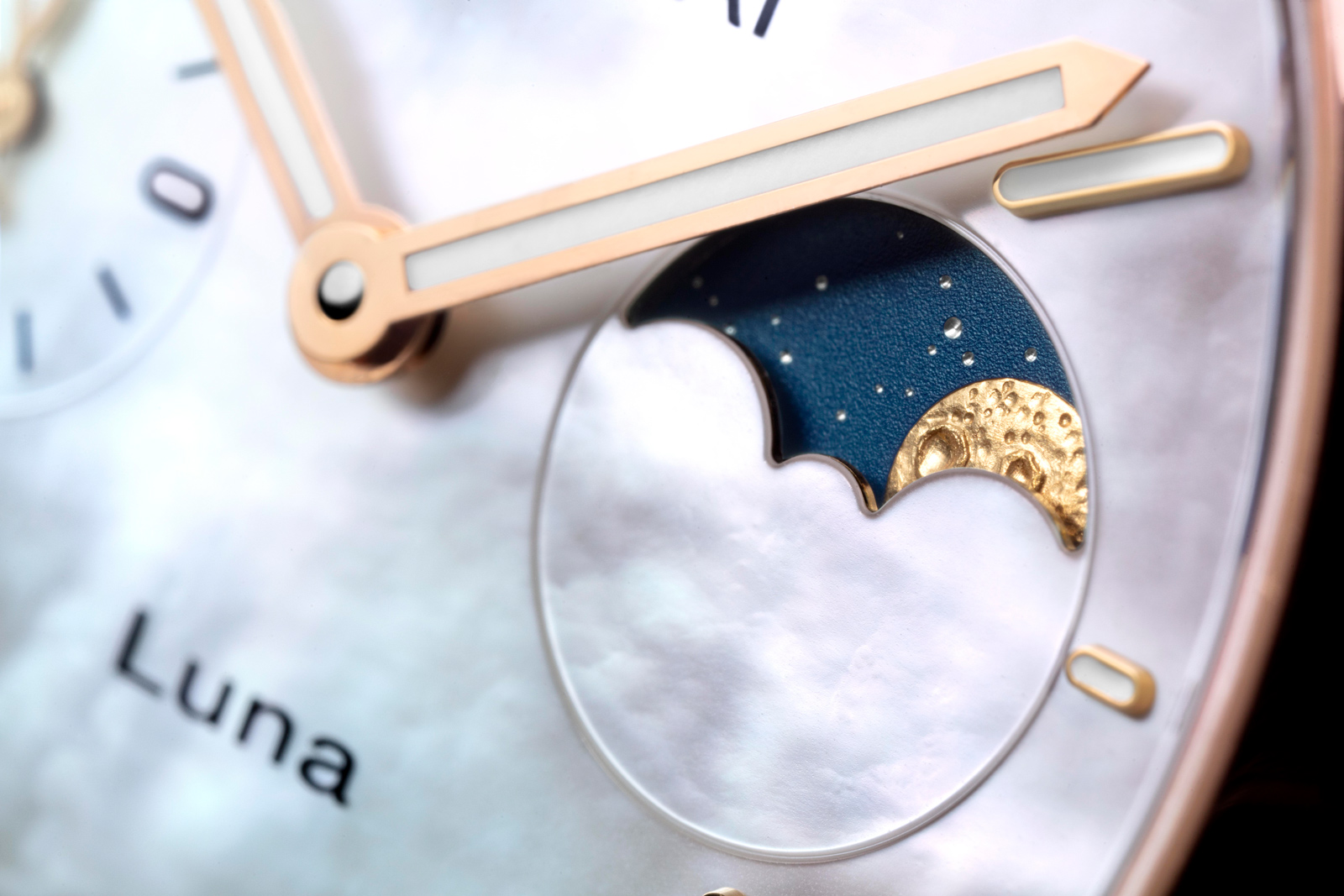 While the metallic dial in the steel model has a “sandwich” construction, the mother-of-pearl in the gold Luna gets an appropriately luxe dial of mother of pearl with applied markers 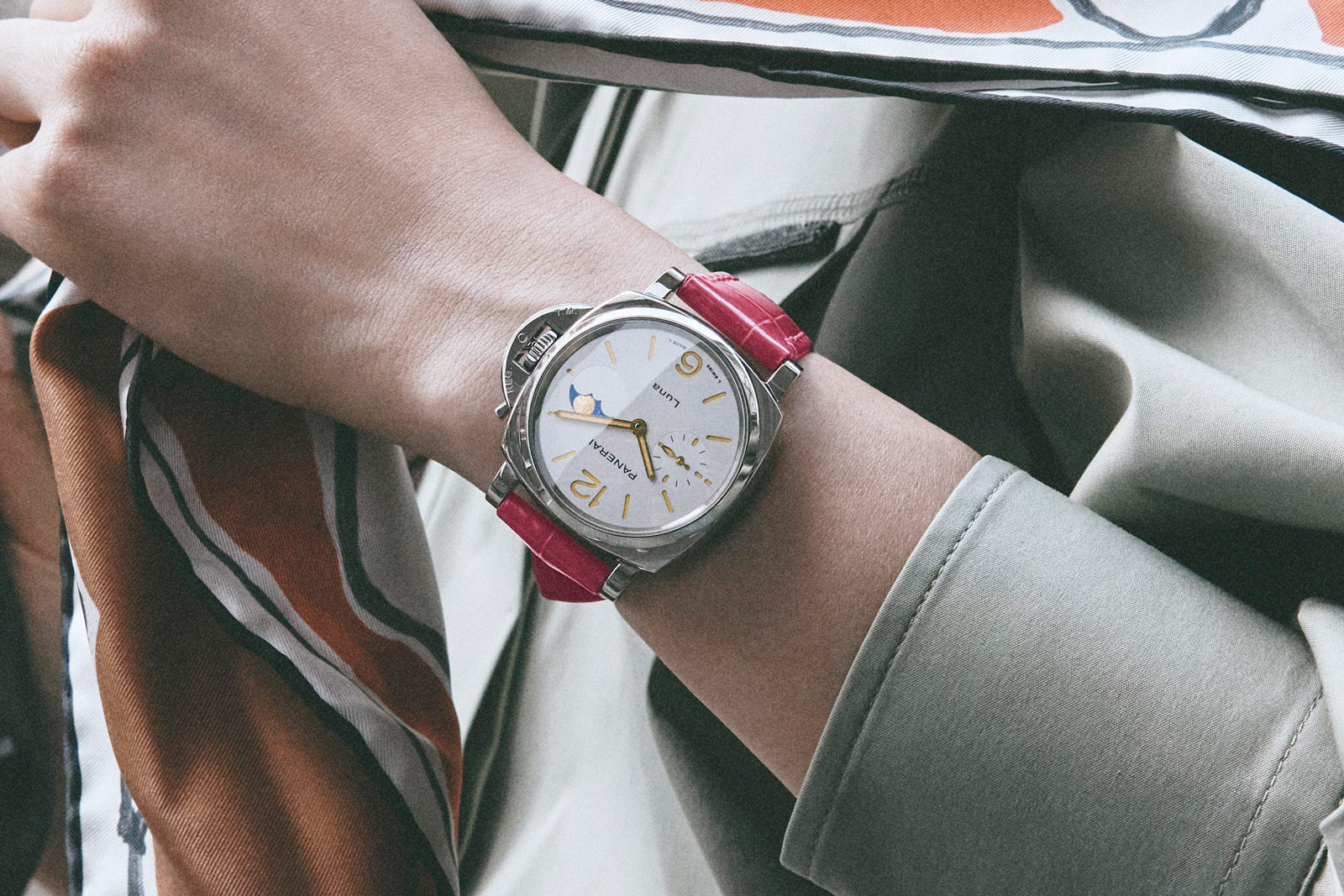 Inside the watch is the P.900/MP, an automatic movement with a three-day power reserve. It’s finished in the brand’s usual minimalist styling, with neatly brushed bridges and blue-filled engraving. The movement, however, is only visible on the gold versions as the steel models have a closed case back.

Though customised for Panerai, the P.900 is actually a calibre developed by Valfleurier, the behind-the-scenes movement specialist that supplies many Richemont-owned brands. Conceived as a no-frills workhorse for entry-level models, the movement is also known as the Cartier 1847 MC (found in the latest Pasha for instance), the IWC 32000 family (found in the base-model Pilot’s Watch), and the Baume & Mercier Baumatic. 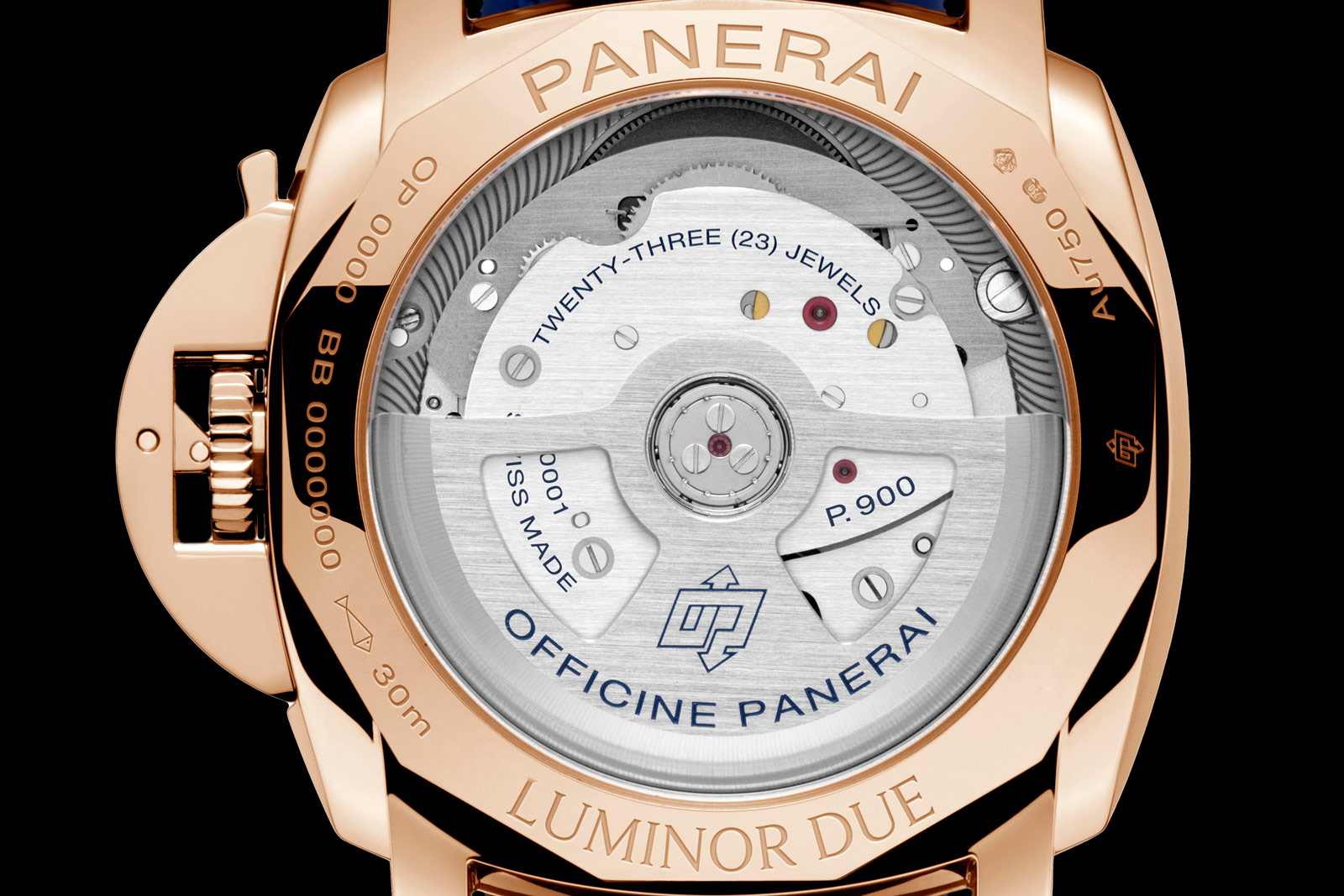 Once again with links that echo the shape of the crown lock bridge.

Panerai Introduces the Luminor Due Trio in Titanium

Dedicated to the America’s Cup yacht.