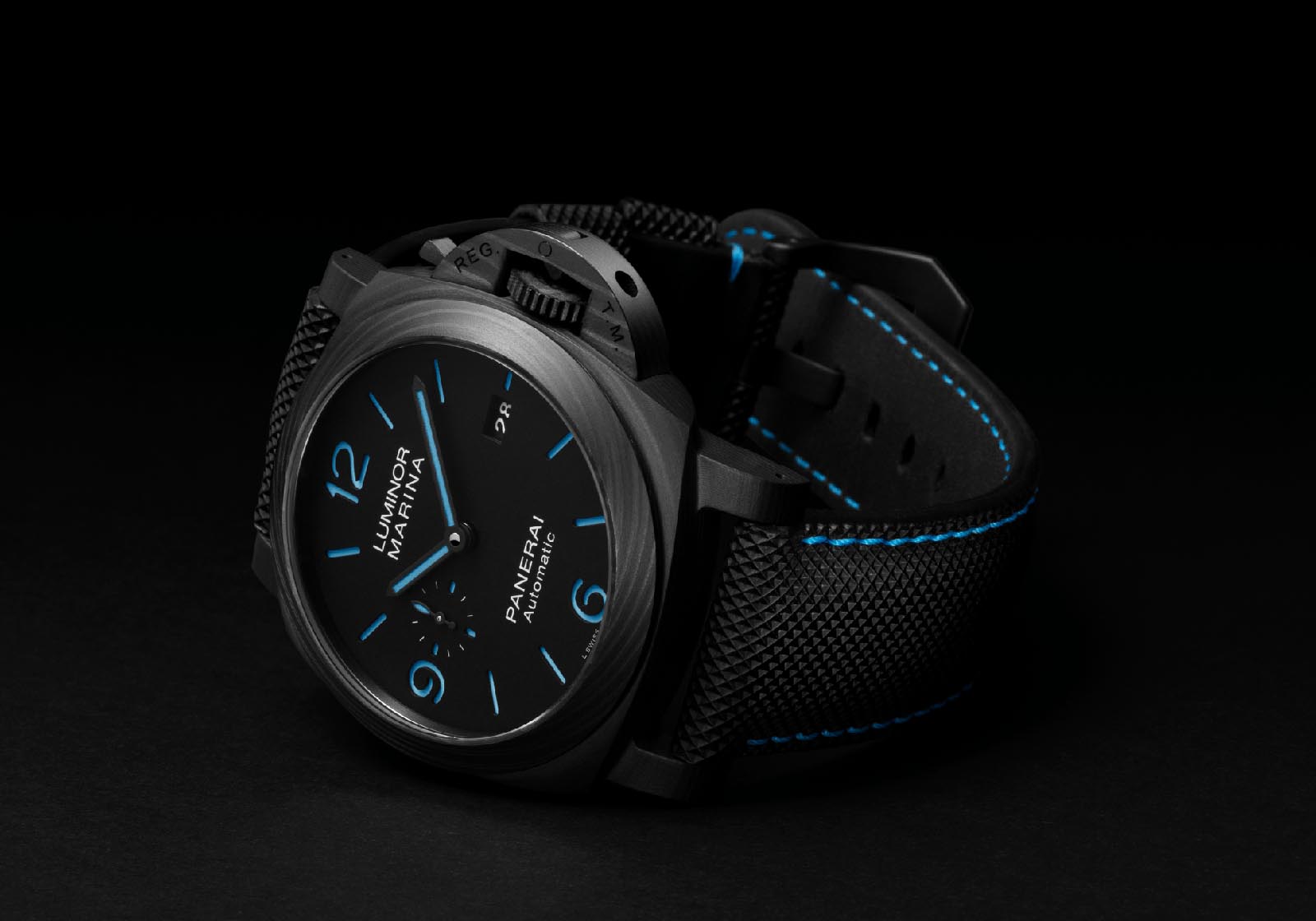 Three years ago, Panerai introduced the LAB-ID Luminor 1950 Carbotech 3 Days PAM 700, an experimental watch boasting carbon-based innovations inside and out, including ceramic bridges and plates that do away with jewelled bearings as well as a dial coated in carbon nanotubes giving it an absolute black finish. But the LAB-ID was truly experimental, and word has it that only a handful were sold and the planned 50-piece run was never completed.

But no doubt due to the popularity of the LAB-ID’s design – and unpopularity of the €50,000 price tag – Panerai has just announced the Luminor Marina Carbotech 44 mm (PAM01661). It’s essentially a smaller, simpler LAB-ID, featuring a case in the same material, as well as blue lume on the dial and hands, but with a straightforward automatic movement without any of the bells and whistles found in the LAB-ID. 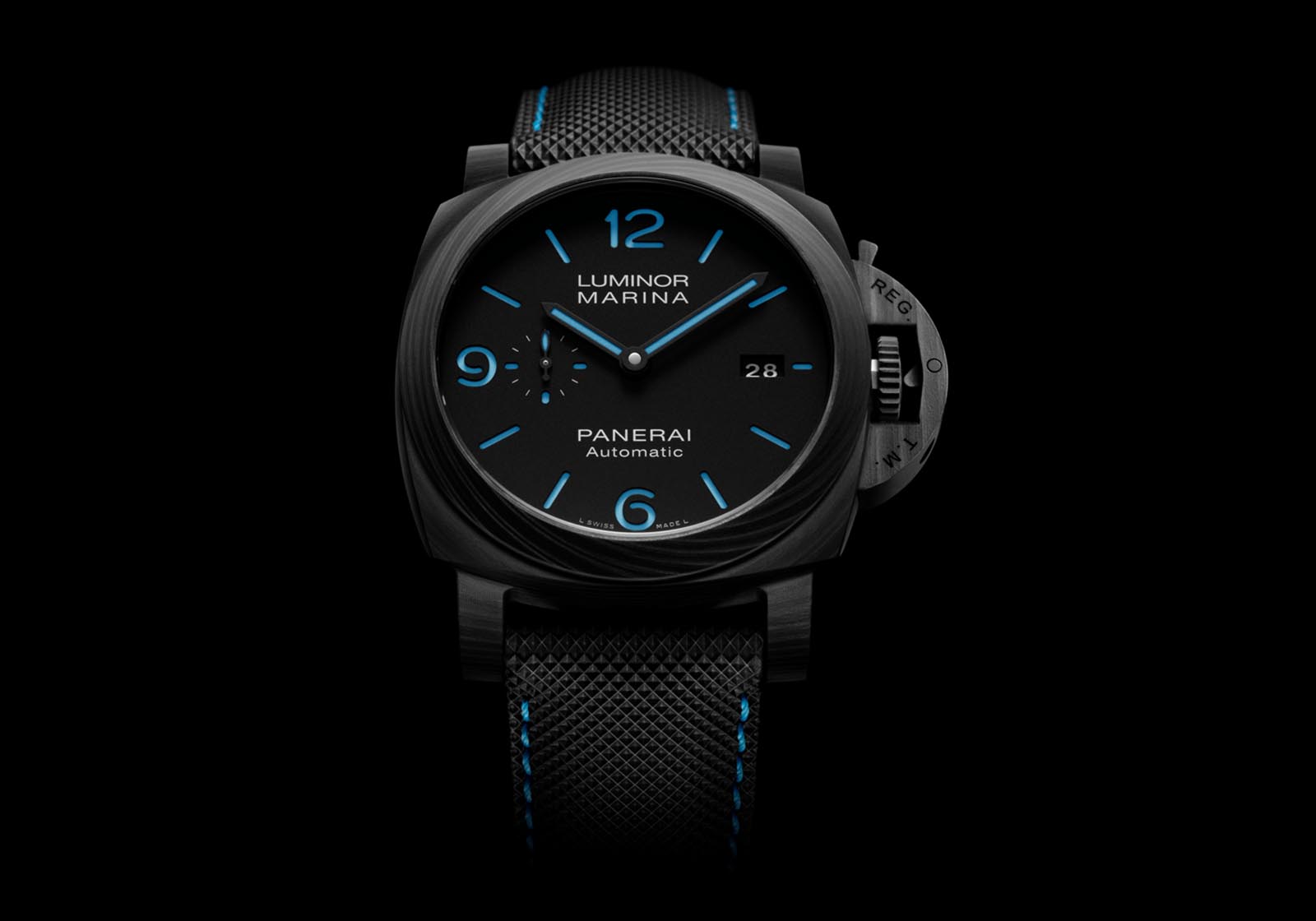 Depth rated to 300 m, the case is made of Carbotech, a carbon fibre-reinforced polymer produced by compressing thin sheets of carbon fibres at high pressure with a high-end polymer (PEEK), explaining the wave-like appearance of the material.

The result is a material that is light and strong, explaining why the large, 44 mm case weighs just 96 grammes, less than half the same case in steel. 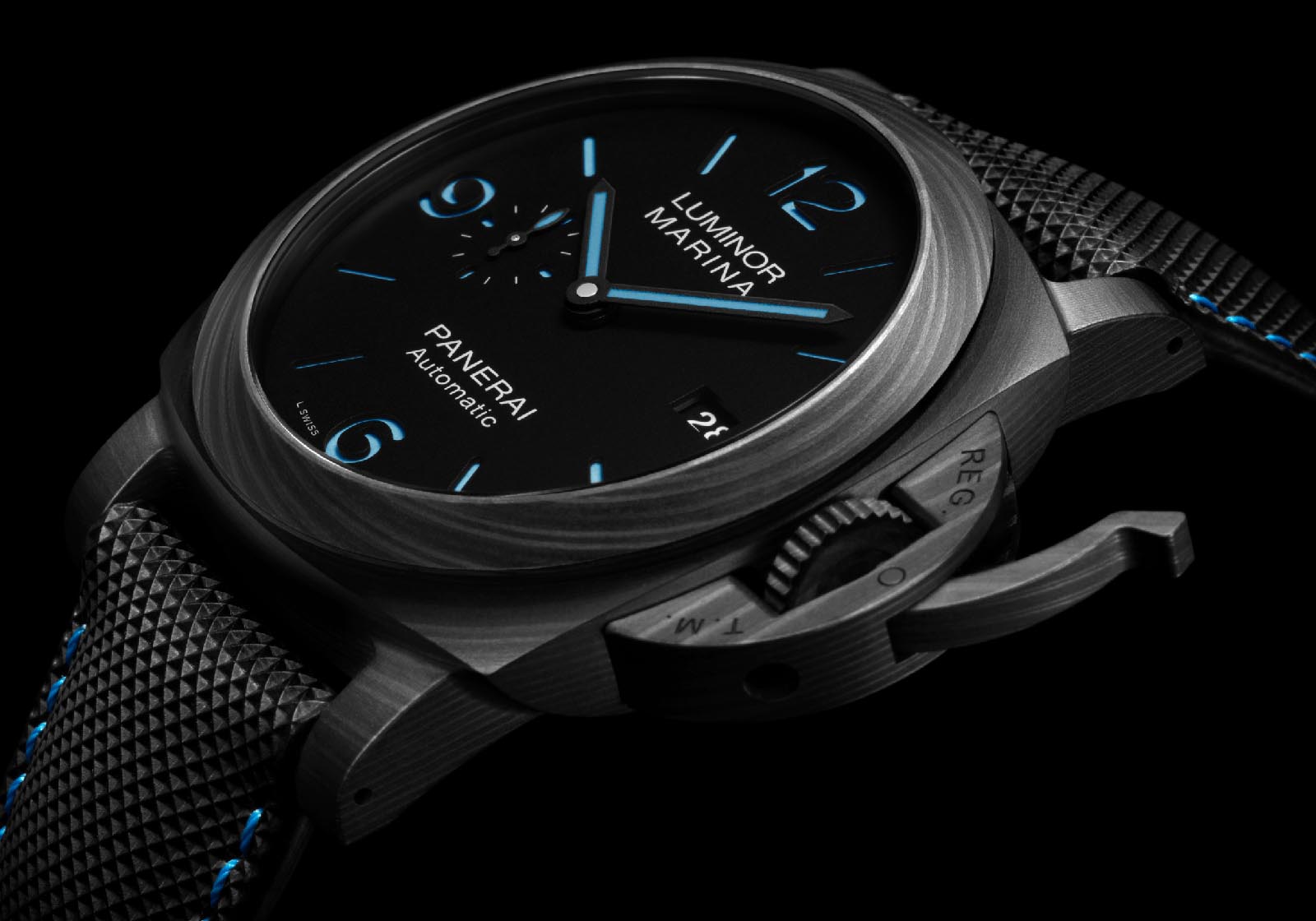 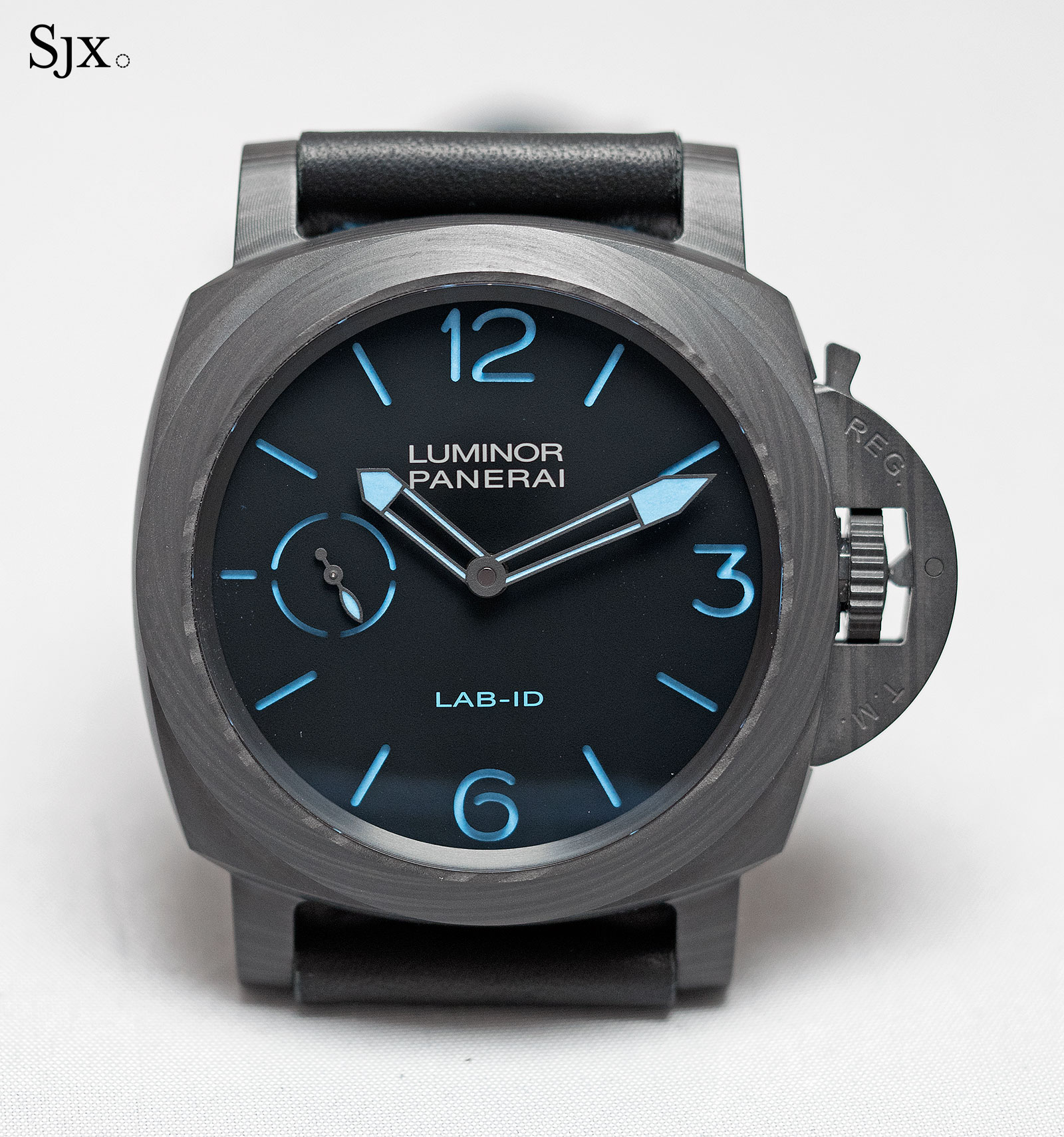 The watch has a standard Panerai dial, but in the colours of the LAB-ID. Like most Panerai dials, it has a “sandwich” construction, where the hour markers are cut-outs that reveal the blue Super-Luminova on a lower dial disc. 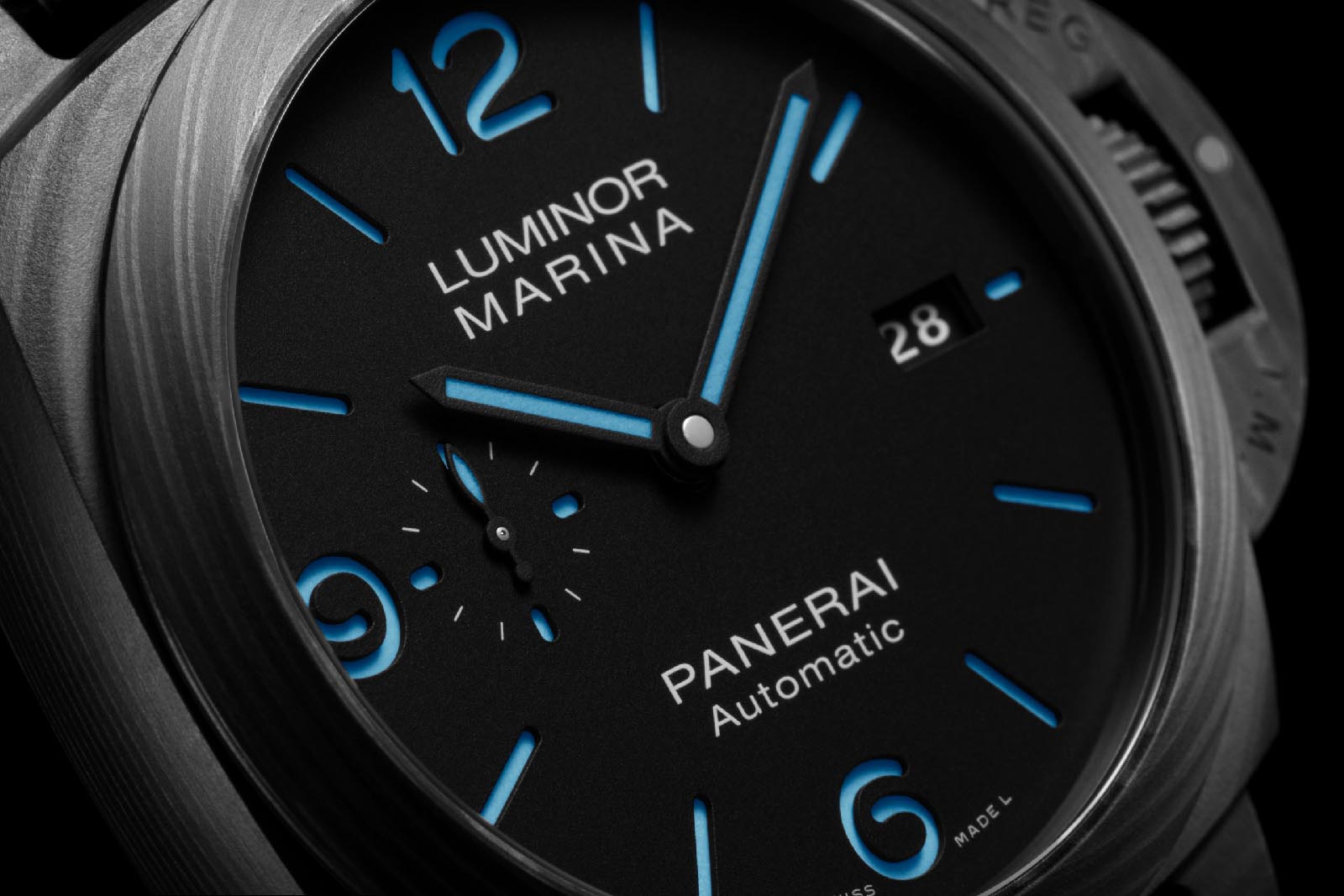 And while the LAB-ID was powered by a hand-wound movement modified with carbon ceramic components as well as a silicon escapement, the new Luminor is equipped with the cal. P.9010, an automatic with a three-day power reserve and date. The movement features a hacking seconds as well as an independently adjustable hour hand that makes changing time zones easy. 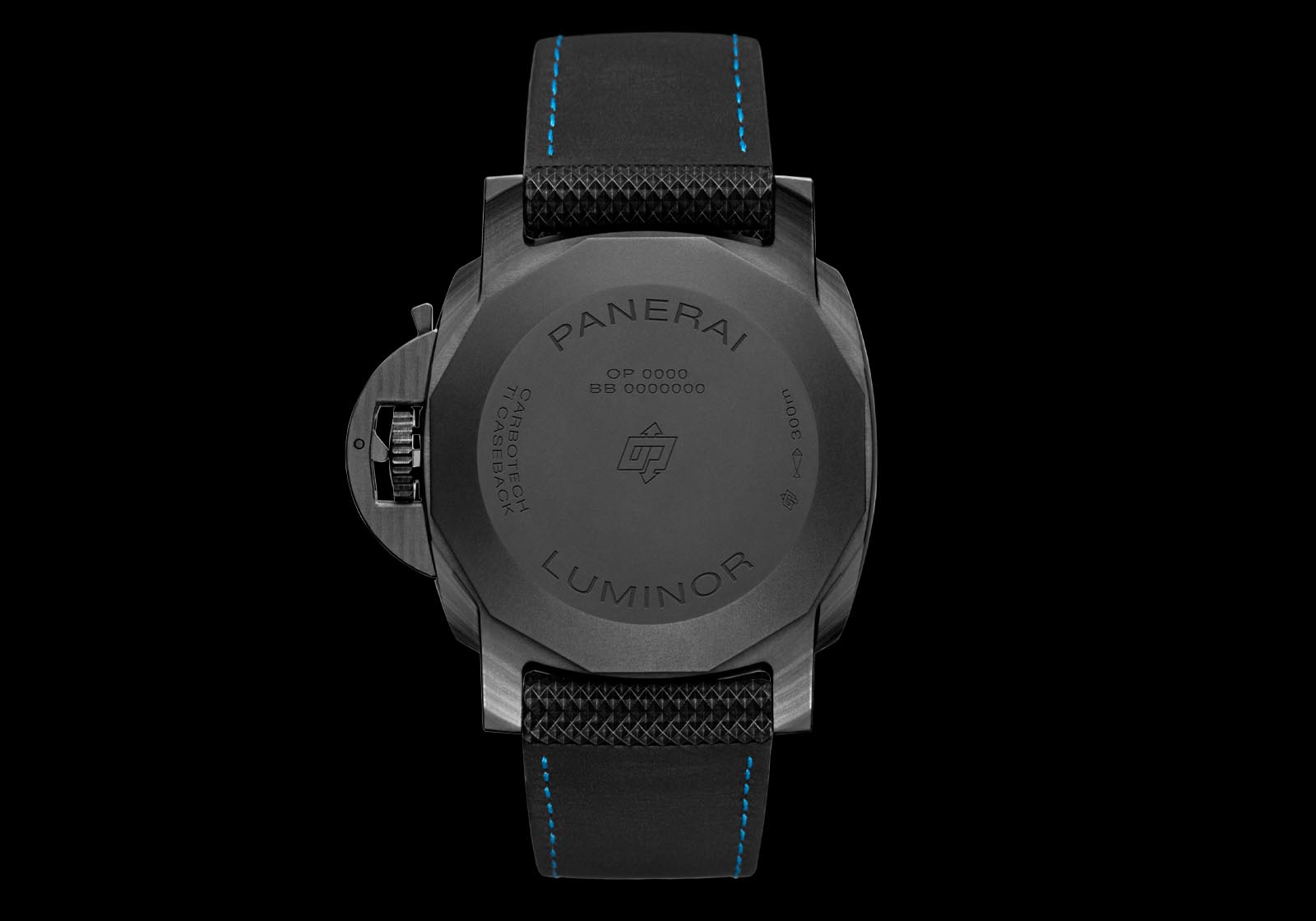 The case back is black-coated titanium

With a brushed silver dial.

“Marina Militare” is back.