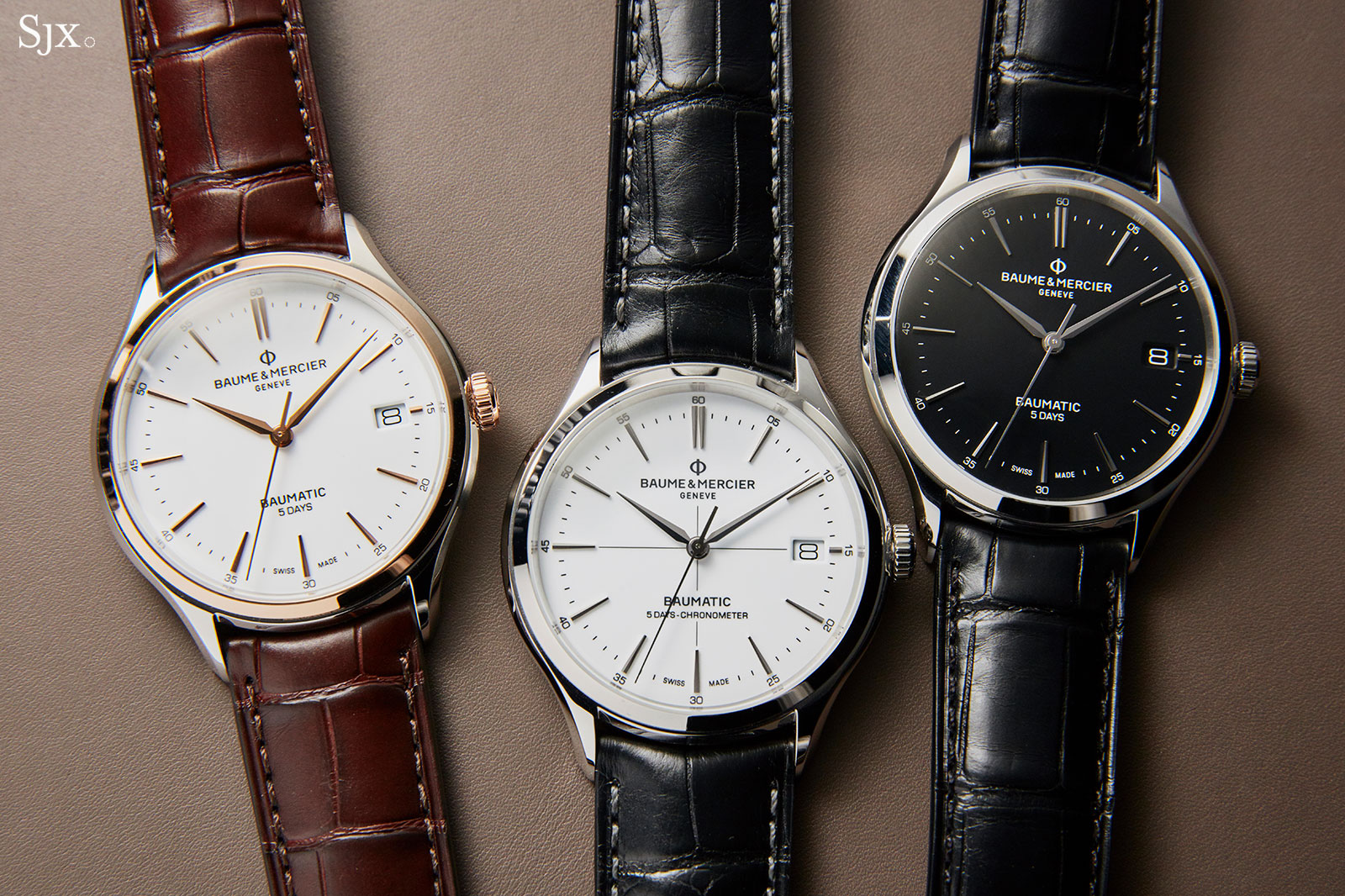 Baume & Mercier is the poor cousin of the big brands in luxury conglomerate Richemont, which also owns Cartier and IWC. Once a highflier in the 1980s and early 1990s, the brand hasn’t seen a revival of its fortunes, despite attempts at giving it a new image. Most recently Baume & Mercier was reduced to rolling out a preposterously described, not-quite-sister brand.

That’s a shame, because the new Clifton Baumatic is actually a solid product that’s one of the best entry-level mechanical watches on the market, possessed of useful features and handsome midcentury looks – at a relatively reasonable price. It revives a name first used in the 1950s in self-winding Baume & Mercier watches, but now applied to the newly developed BM12-1975A, an entry-level but impressive movement that is likely an important development for Richemont. The Baumatic is a moderately sized men’s watch that’s 40mm in diameter a slim-ish 10.3mm high. The short lugs and narrow bezel give it strongly classical proportions.

It’s worth pointing out that the case has a finished that’s a notch above most watches in this price range, which usually apply the same surface treatment to the entire case. In contrast, the Baumatic case has brushed sides and a polished top, along with a wide bevel that runs lengthwise. Visually it takes its cues from 1950s and 1960s watches, so the look is slightly generic but still attractive. It pairs lance-shaped hands and tapered hour markers with slightly glossy, lacquered dials. The detailing of the dial and hands goes above and beyond, with both the hands and hour markers being faceted lengthwise and finished with contrasting polished and frosted surfaces. Minute numerals give the dial a slightly more functional look, but blend in well enough to keep the dial a clean, almost minimalist look. Notably, the date disc matches the colour of the dial, which means the black dial model has a pleasing, tone on tone date.

It is available in two case iterations: stainless steel, or two-tone steel and gold. And just for geeks Baume & Mercier also offers a COSC-certified Baumatic chronometer for US$200 extra. While the certification doesn’t change much in fit or function, the Baumatic chronometer is the best looking of the bunch because of the “crosshair” dial, a retro touch that boosts its appeal and evokes vintage chronometers. All variants of the Baumatic are powered by the cal. BM12-1975A, a 21-jewel movement visible through the case back. Boasting high tech features, the movement stands in stark contrast to the classic looks of the watch.

Most watches in the price range of the Baumatic rely on ETA or Sellita movements. The BM12-1975A, however, is a proprietary movement with specs that far exceeds those of comparable movements from independent suppliers. Though it’s larger and has a longer power reserve, the BM12-1975A is derived from Cartier’s 1847 MC movement, explaining the similarity in components and layout.

Consequently, while the BM12-1975A is proprietary, it is not in-house: it was jointly developed by two divisions of its parent company, the Research and Innovation Centre in Neuchatel, and ValFleurier, a big manufacturer of watch movements and parts that supplies most Richemont brands. In fact, the movement is ambitious enough that it’s obvious the calibre is not merely a development for Baume & Mercier, instead it’s a test run before scaling up production for supply to the rest of Richemont. The movement was conceived to be reliable and simple to put together, resulting in a straightforward construction. Though it has features found in more expensive watches from Richemont brands, including a free-sprung balance wheel and “Magic Lever” winding, the BM12-1975A has a condensed construction that relies on technology to improve timekeeping.

Naturally, that led to silicon, which is used to make the pallet fork, escape wheel and hairspring, making Baume & Mercier to become the first brand in Richemont to offer silicon-equipped movements on a large scale. Due to the use of silicon and other non-ferromagnetic materials, the BM12-1975A is resistant to magnetic fields of up to 1500 Gauss, which is 25 times the usual 60 Gauss mandated by the ISO standard for anti-magnetism. In comparison the magnetism resistance of a watch equipped with an old school soft iron inner cage (or Faraday cage), like the Rolex Milgauss for instance, is 1000 Gauss.

Interestingly, the hairspring boasts what’s been named TwinSpir technology, being made made of two layers of silicon, with the grain of each layer set perpendicular to the other, and a layer of silicon dioxide in between. This was done so the hairspring is thermocompensated, meaning its motion isn’t affected by changes in temperature. The escapement is also a new design, dubbed Powerscape. It has an optimised structure for more efficient function, made possible by the fact that silicon parts can be fabricated to microscopic precision. Together, the Powerscape escapement and TwinSpir balance are largely responsible for the impressive five-day power reserve on a single barrel, which contains a longer mainspring made from the latest alloy available, Nivaflex Plus.

The silicon components – as well as a good old fashioned adjustable mass balance wheel – ensure the BM12-1975A throughout its lengthy, 120-hour power reserve. Though the primary feature of the BM12-1975A is the tech inside, some effort has been made to dress it up. It’s equipped with an open-worked, striped rotor and bridges finished in surprisingly small grained perlage. The base plate is also snailed, albeit with an engraved pattern rather than a polishing technique. All the finishing is obviously industrial, but attractive enough for the price. The Clifton Baumatic makes a compelling case for itself, being competitively priced and a lot of watch for the money.

It still costs more than comparable watches from Longines, arguably the champion in affordable mechanical watchmaking, but comes close. For the same money, for instance, one can have the Longines Master Annual Calendar, which boasts an extra complication, but a simpler dial and case. Longines’ advantage lies in the fact that its parent company Swatch Group is the biggest maker of mechanical movements in Switzerland, producing several million units a year. In contrast, Richemont’s mechanical movement output is in the mere six figures.