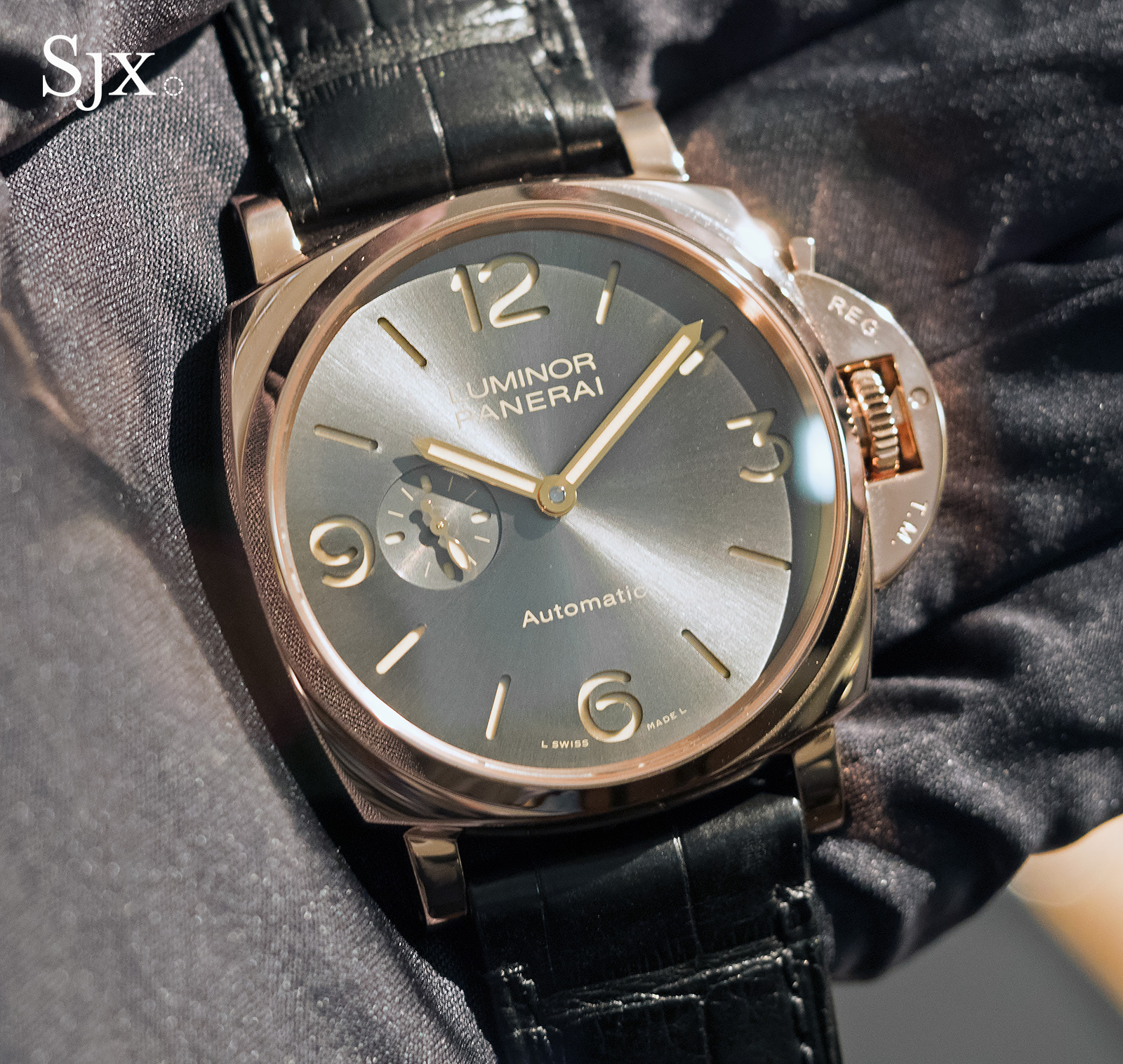 Unveiled two weeks ago as part of nearly a dozen new releases, the Luminor Due is an surprising and unusual watch for Panerai. In fact it’s contrary Panerai’s Italian-navy-diver DNA, so to speak, yet the Luminor Due makes sense, both as a product and as a strategy.

The Luminor Due is Panerai’s version of an extra-thin watch, in essence a slimmed down Luminor 1950. The traditional Luminor outline remains, looking almost identical from the front, crown-lock and all, but with a slim profile.

Due means “two” in Italian, and the Luminor Due is meant to be just that – the second generation Luminor. Its reduced size makes it more wearable, less like an piece of navy equipment and more like an ordinary watch. Consequently it will appeal easily to a much wider audience, a necessity for Panerai as the brand reaches maturity, growing beyond the hardcore Paneristi fanbase.

Two versions of the Due are available, a 42mm hand-wind and a 45mm automatic that’s the subject of this story. Though the Due dial is a sandwich construction – the traditional Panerai staple – it’s finished in a pale grey with a sunburst brushing, giving it a more polished feel. A military watch this is surely not. The Luminor Due sits close to the wrist, with a low centre of gravity. But though it is slim, the case is still comfortingly large, with the hand-wind being 42mm and the automatic 45mm (pictured here). Though the 42mm hand-wind is a large watch by most standards, when placed next to the 45mm it does looks reduced. The larger automatic is the more appealing version of the Luminor Due, because it approximates the chunky feel of a traditional Panerai while being slim. But the Luminor Due automatic costs over a third more than the hand-wind, a stiff premium.

There is some justification in the movement construction, which has twin barrels, a three-day power reserve, and an adjustable mass balance – this more than just a basic automatic. In fact, it also has an unusual, unseen feature: the winding mechanism for instance features a grande sonnerie style winding click.

Nonetheless, the functional benefit to the consumer of an automatic vs. a hand-wind is difficult to grasp vis-a-vis the 30 percent premium. Though both the steel and red gold version of the Luminor Due 45mm due the same calibre, the movement in the gold version is finished more elaborately with open-worked bridges and a solid gold rotor. While the Due might be contrary to the brand’s historical persona, traditionalists will still have the unadulterated Panerai watches to choose from with watches like the Luminor PAM372. The Due is an option for those who want something different.