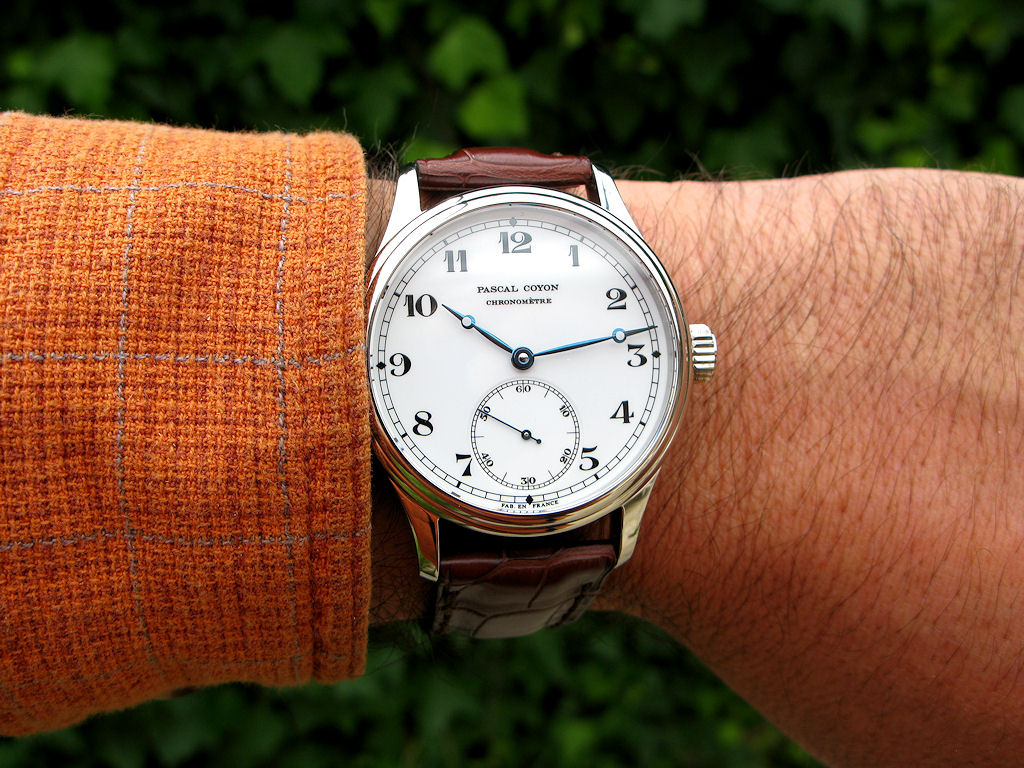 Pascal Coyon is a watch and clock repairer in Bayonne, a mid-sized city in southwest France close to the border with Spain. But Coyon is no ordinary neighbourhood horologist, for he has created his very own Chronometer, a classically styled and finished wristwatch. Taking 16 months from concept to prototype, the development process of the Chronometer was document on Coyon’s Facebook profile with photos of the work in progress, garnering significant attention from watch enthusiasts. Recently, the final prototypes for the Chronometer were completed.

Just like American independent watchmaker Keaton Myrick, Coyon chose as the base for his Chronometer the reliable and solid Unitas movement, much beloved by makers of large watches.  Though based on the Unitas 6498, the Coyon Chronometer is miles, or rather decades, away from the stock movement found in mass produced watches. The movement of the Chronometer looks very much like its inspiration, the Longines calibre 19.70. That was a pocket watch movement made in the first half of the 20th century, and in its later years was utilised in Second World War deck watches. Coyon has given the movement the sweeping, curved bridge and cocks characteristic of movements of that era. And the distinctively shaped regulator index is just like on the Longines 19.70. Much of the movement Coyon makes himself, with the finishing executed by hand. Most of the effort and skill has been directed to the impressive finishing of the bridge and cocks, which have polished bevels on the edges and countersinks. The flat polish on all the steel parts, like the cap on the escape wheel cock and the winding click, is equally splendid. The external components of the Chronometer are outsourced and look somewhat common. The dial is white lacquer, with the option of red Arabics at 12 o’clock and 60 on the sub-dial, and Breguet or spade hands. Cases are in polished steel, either 41 or 42 mm. The 42 mm case is offered with either a smooth or stepped bezel.

The Chronometer is available in three frosted movement finishes – traditional yellow gold gilt, rose gold or rhodium – although rose gold has already been sold out. Each will be limited to 20 pieces, numbered on the base plate of the movement. All completed Chronometer timepieces will be tested by the Besançon observatory and will be delivered with a certificate attesting to that. The Pascal Coyon Chronometer will cost €4125 before taxes (equivalent to US$5540). Delivery will be in the third quarter of 2015, with a deposit of €2000 due upon order. Coyon can be contacted via Facebook or email.