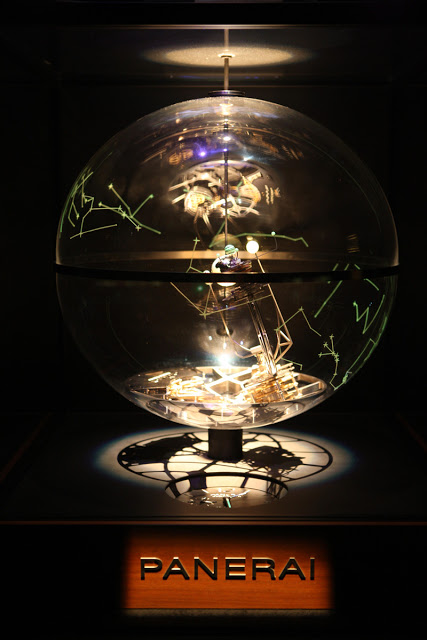 Built to display the position of the Earth and other heavenly bodies, the Panerai Jupiterium has just hit Singapore’s shores and will be on display at its boutique until February 2014. First unveiled in 2009, the Panerai Jupiterium has since embarked on a world tour, with its most recent stop being Singapore. From now until 14 February 2014, the Jupiterium will be on display at Panerai’s boutique in Singapore. Created as a tribute to Galileo Galilei, the Jupiterium is a planetarium-clock – capable of displaying the motion and position of the Earth, the Sun and Moon, as well as Jupiter and its four satellites. This is what Galileo saw when, having invented the telescope, he first gazed at Jupiter in January 1610. The planterium is housed inside a clear sphere, with each half representing the Northern and Southern hemispheres. And the sphere is covered engraved with Luminova-filled constellations which glow in the dark. In addition to the astronomical display, the clock also has a perpetual calendar as well as the time display. Open to the public, the Jupiterium showcase is nside the VIP room of the Panerai boutique, located on the ground level of ION Orchard. – SJX 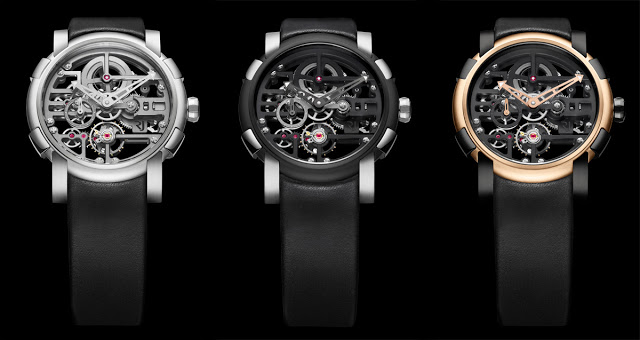 The first skeleton wristwatch from Romain Jerome, the open-worked bridges of the Skylab are inspired by the lines of NASA’s first space station, which went into orbit 40 years ago. Equipped with a open-worked movement from Concepto, the Romain Jerome Skylab is not just the brand’s first skeleton timepiece, it is also the slimmest wristwatch in the Romain Jerome line-up. The 44 mm case is based on the Titanic-DNA case as used in the Sailor’s Grave, but slimmed down, most obviously with the thinner bezel and lugs. The hand-wound movement is linear in its layout – the barrel is at 12 o’clock and the balance wheel is at six, while the gear train and keyless works sit in between. On the back the distinctive three-armed winding click spring marks this out as a Concept movement. Three versions are available – all steel, black PVD coated steel bezel and rose gold bezel – each of which is limited to 99 pieces. The retail prices are US$16,950 for both steel models, and US$19,950 for the rose gold. – SJX To mark the 75th anniversary of the first Batman comic, Romain Jerome has teamed up with DC Comics to create the Romain Jerome Batman-DNA, a limited edition of 75 pieces featuring a glow-in-the-dark, Bat signal dial.

Pre-Basel 2014: Introducing the Romain Jerome 1969, with silicon and meteorite dials (with specs and price)