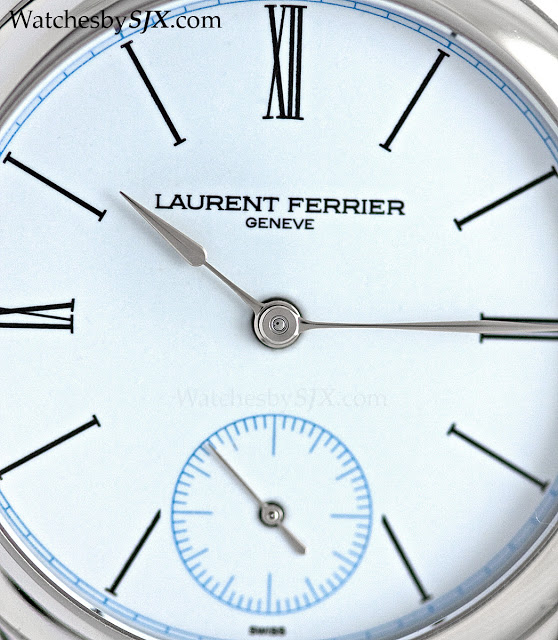 Containing one of the finest finished automatic movements today, the Laurent Ferrier Galet Micro-Rotor was recently made as a limited edition with a white grand feu enamel dial and platinum case. Instead of a lacquered and plated brass dial as found on the regular edition of the Galet Micro-Rotor, this limited edition has a bright, white enamel dial with pale blue accents. Not initially obvious but perfectly complementary up close: the railway minute track as well as the seconds sub-dial are in powder blue. These are matched with white gold assegai hands. The 40 mm case is platinum with the limited edition engraving on the rim of the case back. This also differs from the regular edition in that the case back is secured by screws, while the regular gold models have snap backs. The movement is of course highly decorated. Exclusive to Singapore retailer The Hour Glass, this limited edition of 18 retails for S$131,000 with 7% tax, which is equivalent to about US$105,400. Remember to check out my photos of the Galet Micro-Rotor for more detail of the beautiful calibre. – SJX 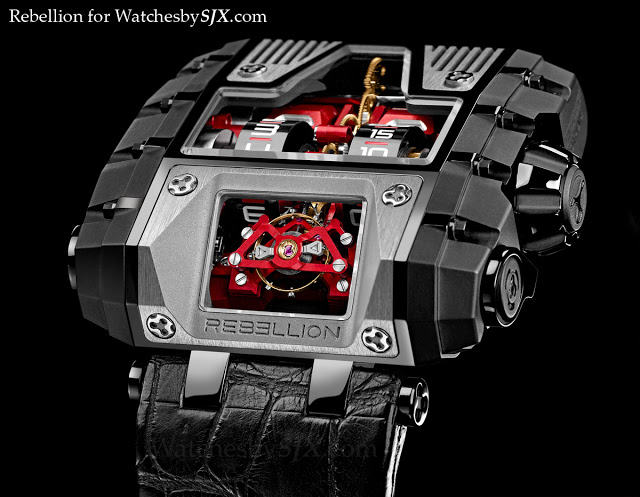 The Rebellion T-1000 with its 1000 hour, or 41 day, power reserve, has been beefed up. Reminiscent of the Tumbler from The Dark Knight, the new Rebellion T-1000 Gotham is a limited edition of 25 pieces. Rebellion launched the T-1000 a couple of years ago but despite its amazing 1000 hour, or 41 day, power reserve, the watch never got as much press as it should. While the rest of the Rebellion line-up is quite inane, think extremely large Valjoux 7750 powered chronographs, the T-1000 is outstanding. Originally penned by Eric Giroud, the T-1000 has been redesigned and improved. Now almost comically muscular, with lines inspired by the Tumbler from Christopher Nolan’s Batman trilogy, the T-1000 Gotham retains the same movement as the original T-1000. Over the top as it is, the styling of the T-1000 Gotham suits the size and purpose of the watch better than the original – the new case is a winner. And at the centre of the case is the balance wheel, fitted with a double hairspring supplied by Straumann, inclined at 39 degrees. In theory that gives better chronometry because the inclination helps deal with positional errors while the double hairspring ensures symmetrical breathing of the hairsprings. The enormous 52.2 mm by 47.9 mm case is decorated with various panels and vents, all secured with screws bearing the Rebellion logo. The T-1000 Gotham is available with the movement anodised in black, gold, red, blue or purple, while the case is available either in black coated or natural finish titanium. This is a limited edition of 25 pieces. Pricing is unavailable, but the first T-1000 retailed for about US$100,000, so expect this to be in that region too. – SJX 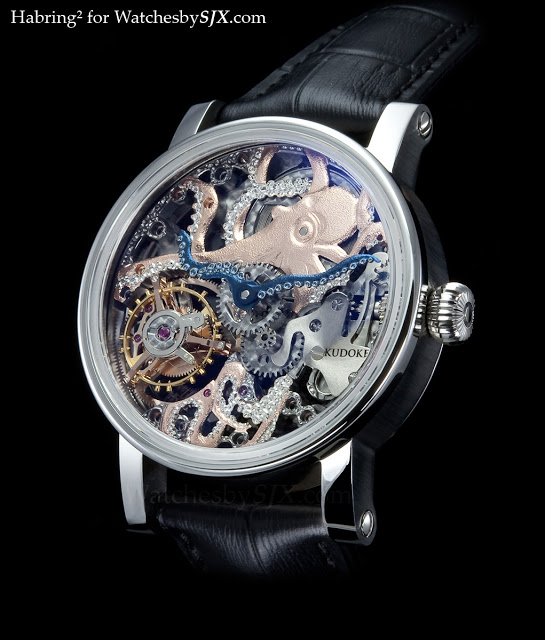 Just a few months after launching the Doppel 3.0, Habring² just announced the KudOkTourbi, a tourbillon wristwatch created together with Stefan Kudoke, a watchmaker who specialises in skeletonised watches. Based on the Habring² flying tourbillon, built on a Unitas 6498 base, the KudOkTourbi features an elaborate, hand-engraved octopus motif. The octopus is rendered in rose gold, with two blued steel tentacles for the hour and minute hands. Habring² watches are typically no frills, so this an exception. The movement has a 44 hour power reserve, and the case is the standard, 42 mm steel Habring² case used for most of its timepieces. Only eight pieces will be made, with a retail price of EUR29,900, including 19% VAT. That translates into about USD38,200. More of Stefan Kudoke’s work can be seen on his website. – SJX