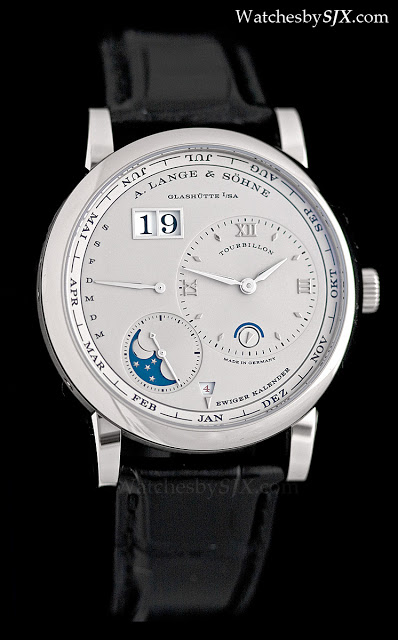 This is a brilliant execution of the perpetual calendar; unlike the other Lange perpetuals all the displays here are arranged unconventionally but legibly and sensibly.

The months are indicated on the perimeter of the dial by the arrow at six o’clock. Just above the arrow is the leap year indicator window. The days are on the left, on a fan-shaped display. Above that is the trademark Lange framed date window. And there is also a moon phase display, as well as a small day and night at the bottom of the time sub-dial. Lange revamped the 1815 line at SIHH this year, expanding it to include complicated timepieces like the 1815 Rattrapante Perpetual Calendar. But for those seeking something simpler, Lange also revived the 1815 Up/Down. 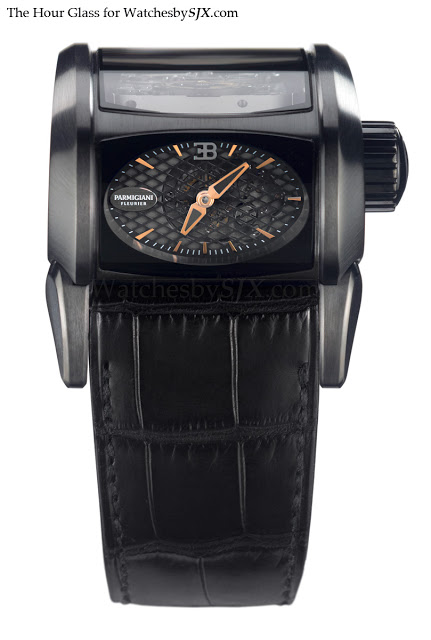 In addition to the coated case, the dial also differs from the normal version. Here the dial is a latticework that resembles the radiator grille of a car.

At 50.7 mm long by 36 mm wide the watch is large and chunky. Shaped to resemble the wing of the Bugatti Veyron Super Sport, this Parmigiani has an unusual movement layout – the movement is perpendicular to the dial face. That is accomplished by bevel gears. Another notable feature is the Dynamometric crown. Instead of pulling it to set the time, push it in and the crown pops out. Here the crown is topped with a black obsidian stone to match the case colour.

The retail price is SGD469,200 and it is available only at The Hour Glass stores.