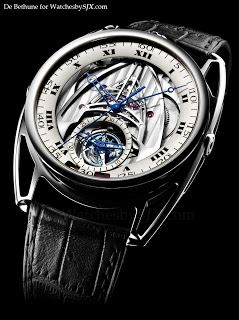 De Bethune recently unveiled the DB28ST dead seconds tourbillon. This is the second DB28 with tourbillon, the first was the beautiful DB28T of SIHH 2011.

Like its sibling the new DB28ST has spring-loaded lugs which allow the titanium case to hug the wrist. Unusually the DB28ST has a platinum bezel.

This obviously uses a variant of the movement found in the beautiful DB25T with its stunning blued titanium starchart dial, which has been inverted to reveal the tourbillon and dead seconds mechanism on the dial side.

Around the open-worked centre is a frosted, sterling silver chapter ring. Beautiful horology blending old and new, as is usual from De Bethune. 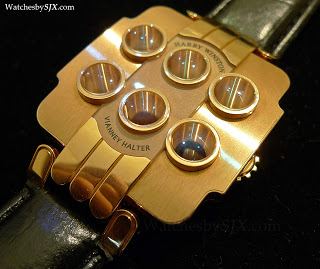 Late last year – nearly a decade after its launch in 2003 – the first few Opus 3 from Harry Winston were delivered. Conceived by Vianney Halter but far too ambitious a concept for the technology available, the Opus 3 almost became a watch of myth and legend.

Several other Opus watches, including rare diamond-set pieces, all owned by the same collector, will be offered at the same sale. The other highlights are surely the diamond pave Opus 5 by Urwerk, and the Opus 6 tourbillon by Greubel Forsey.

For those wondering if the Opus 3 has changed since its 2003 prototype, it certainly has. The watch is larger; it seems wider and thicker though the overall form is the same. Because of its bigger size, the six windows are less pronounced than in the original iteration, so the watch has lost some of its goggle-eyed look.

Despite the changed dimensions, the Opus 3 still looks distinctive and attractive. Each of the six portholes are still set deep, so the numbers are only visible when looked at straight on. And seeing the seconds jump from 57, 58, 59 to the next minute is impressive. So many watchmakers have been consulted throughout the project in the quest to make it work, but I believe it was finally Renaud Papi that solved all the problems associated with jumping discs and torque. In the nine years since the Opus 3 was first launched, Vianney Halter has gone on to present only one new model while the other key person behind the watch, Max Busser, has gone on to create an entire brand, most recently working with Stepan Sarpaneva. Seeing the Opus 3 is really a blast from the past. – SJX