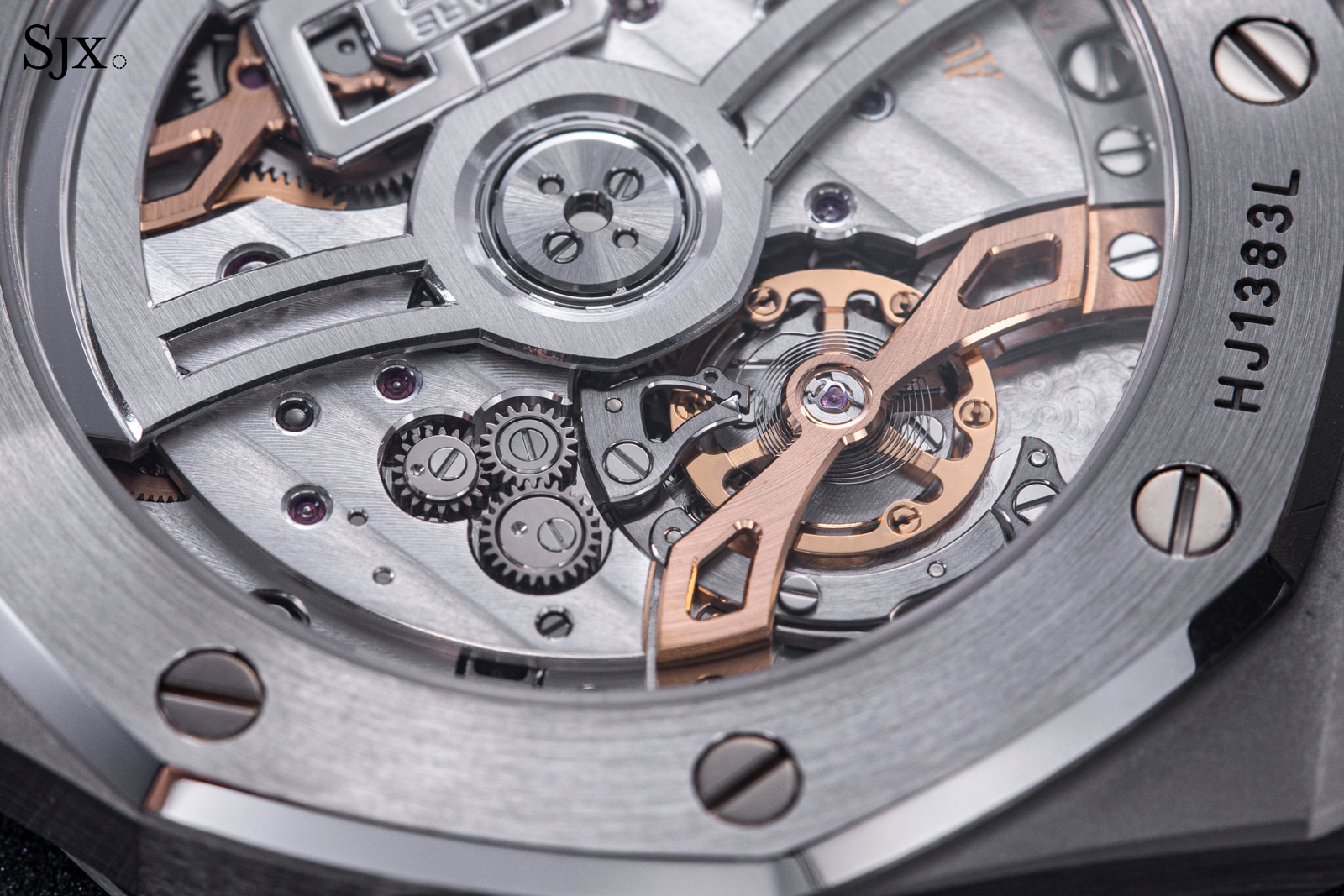 Having covered the year’s best from independent watchmaking, we now turn to the big names (but leaving out the value buys below US$5,000 that we cover in a subsequent story). The notable launches from establishment marques were predominantly evolutionary, either new-and-improved versions of existing models or vintage remakes. Nothing was a landmark achievement – except for the monumental Rolex Deepsea Challenge that is less of a watch than a statement of technical prowess.

While not strikingly novel, many of the year’s best watches are executed very, very well. One of the best is the Audemars Piguet Royal Oak Extra-Thin ref. 16202. Practically unchanged from the 1972 original in terms of design, it doesn’t do anything new in terms of design. The the new “Jumbo” nonetheless is a superior watch, mainly thanks to a brand-new movement as well as subtle improvements to the case. As we detailed in our in-depth review, the “Jumbo” retains the look of the original, right down to the colour of the dial, which is reproduced with PVD treatment.

But it is the new cal. 7121 that’s the star. Amongst the things, it boasts an efficient, bi-directional winding system, as well as a higher beat rate for the balance wheel, resulting in more stable timekeeping. But perhaps most important is the addition of a quick-set date. While getting this watch at the retail price is a Sisyphean task, it is one of the year’s top watches simply because it makes a classic much better. 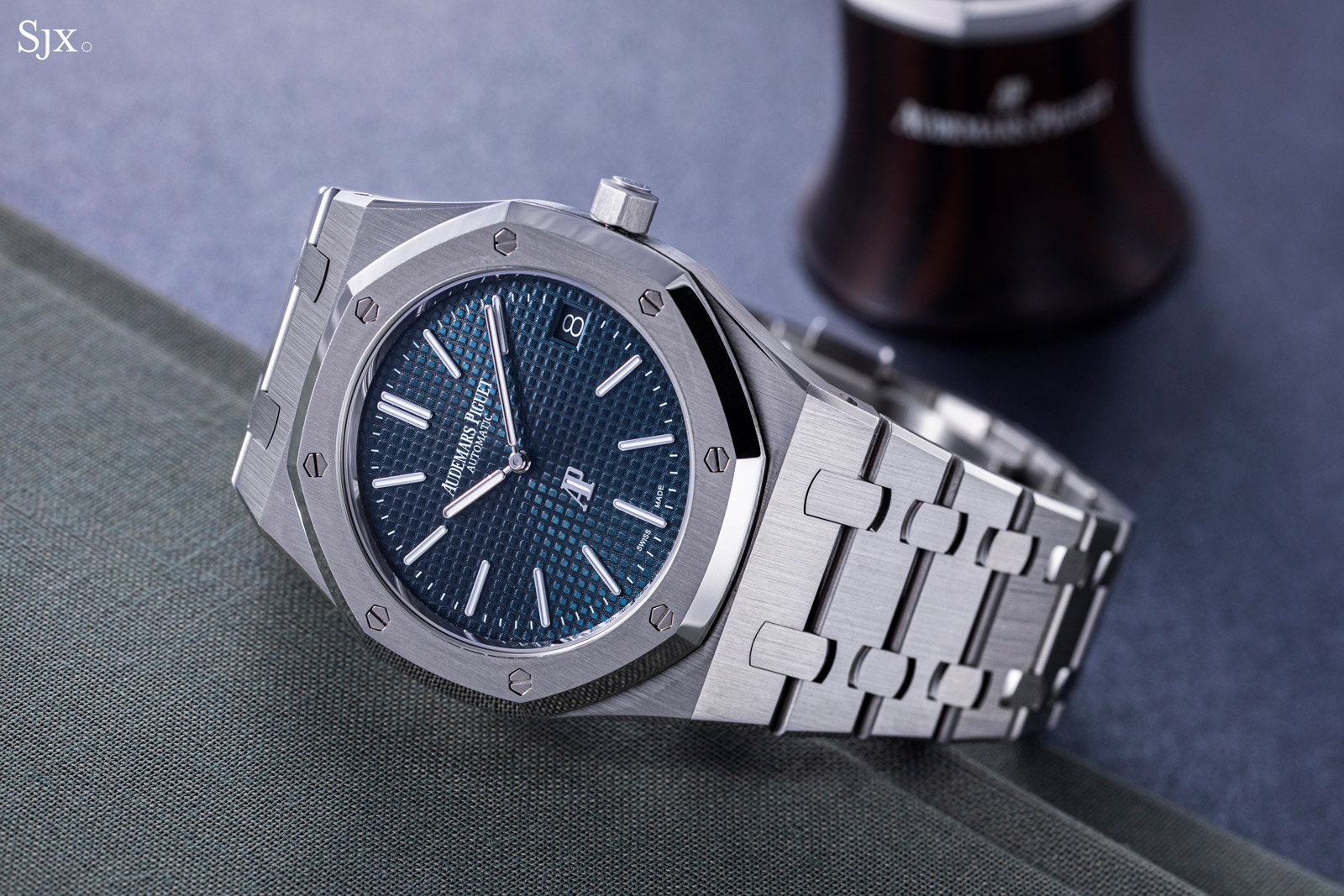 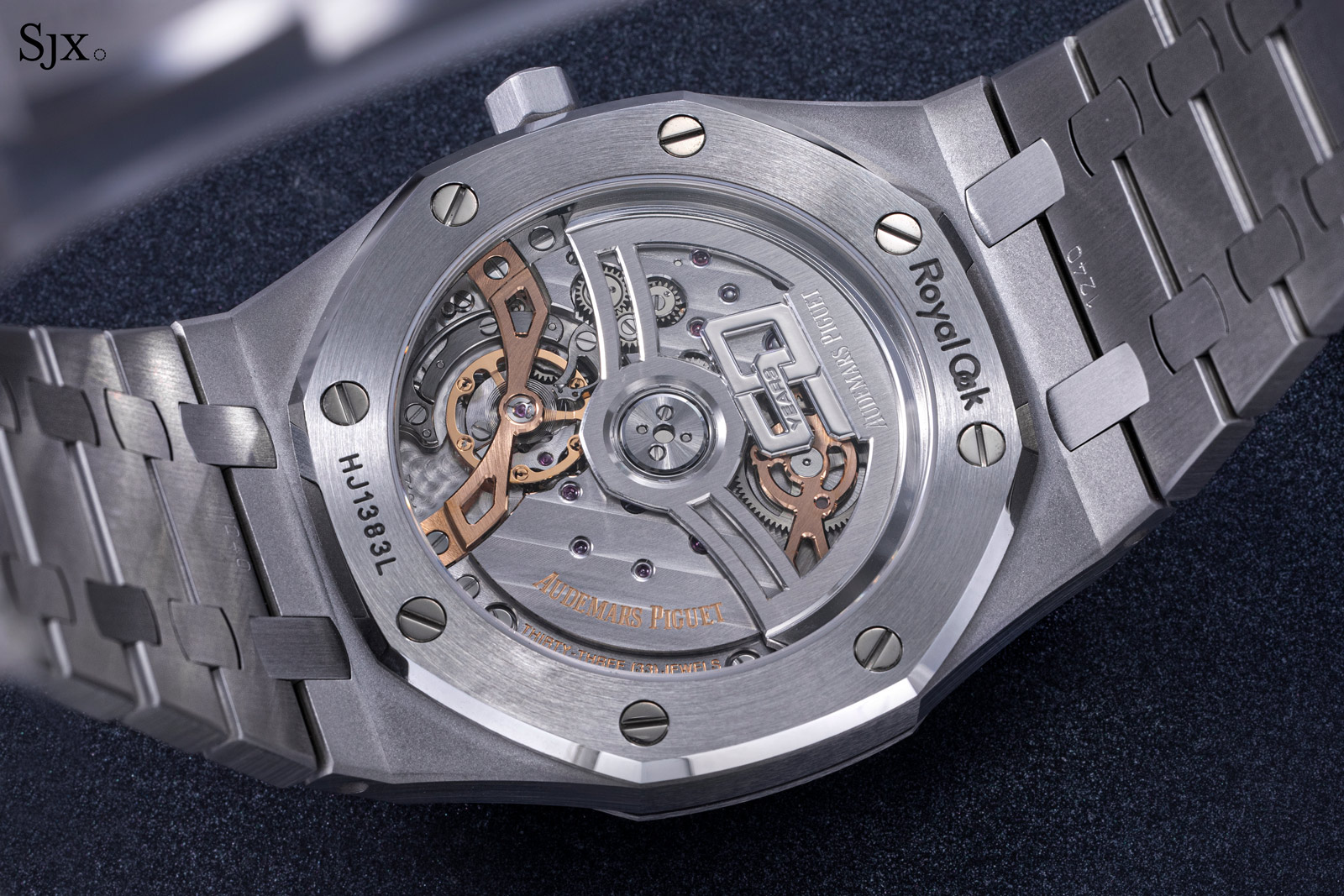 The cal. 7121 with its distinctive gold-plated bridges for the balance and barrel

Like the Royal Oak “Jumbo”, the second-generation Lange Zeitwerk is an upgraded iteration of a familiar model. Given the intrinsic complexity of the Zeitwerk, the upgrades are substantial, but the watch remains essentially the same.

Looking much the same on the front, the new Zeitwerk gains conveniences like a power reserve that’s twice as long, a quickset corrector for the hours, and a thinner movement that gives it a slightly thinner profile overall. 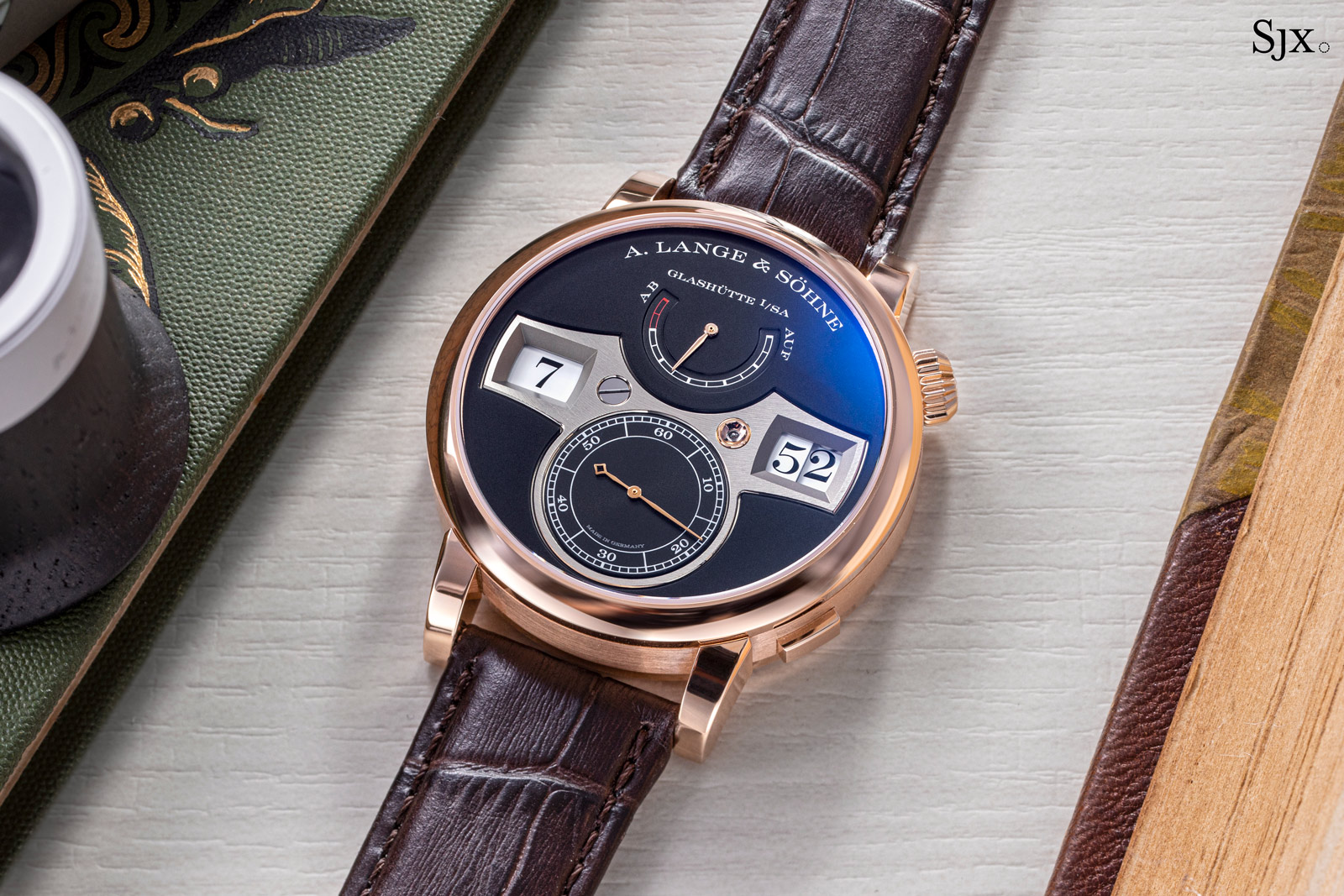 The second-generation Zeitwerk in pink gold

While Patek Philippe’s debuts this year included watches that were more “hype”, like the Nautilus ref. 5811/1G, and more “bling”, like the jewelled ref. 5271, the Calatrava ref. 5226G-001 stands out for illustrating how the brand is improving its entry-level watches (in Patek Philippe terms that still means a hefty price of US$39,030).

Though a simple watch, the ref. 5226G has a peculiar yet elegant aesthetic that is slightly vintage and vaguely military. But its most notable features are the case and dial, not in terms of design but execution. Both are decorated elaborately despite this being one of the most affordable watches in the brand’s line-up.

The dial is has a stamped grained surface with a gradient finish and applied white-gold numerals. And the case has an unusual construction that allows the case band to be seamlessly decorated with clous de Paris guilloche. 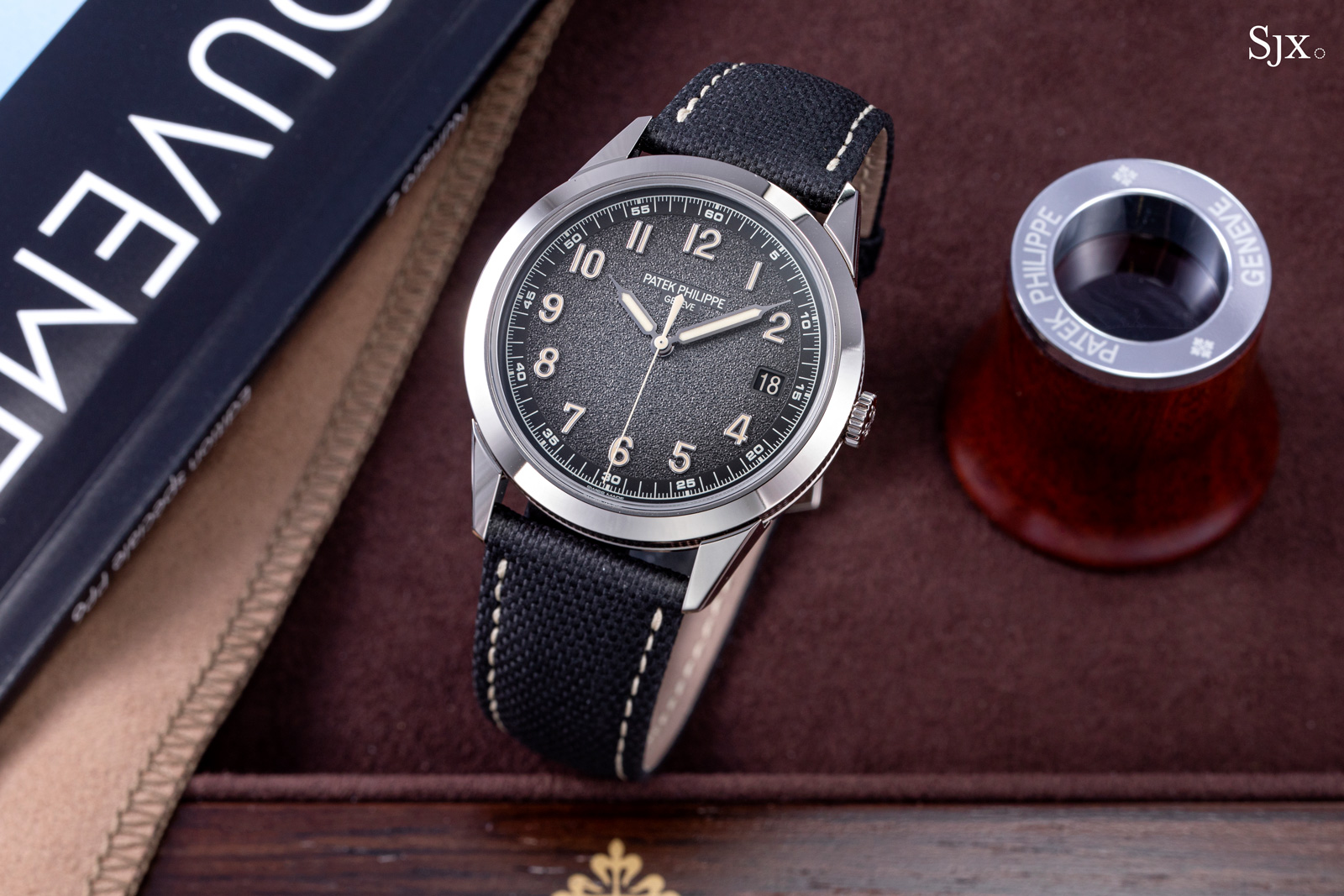 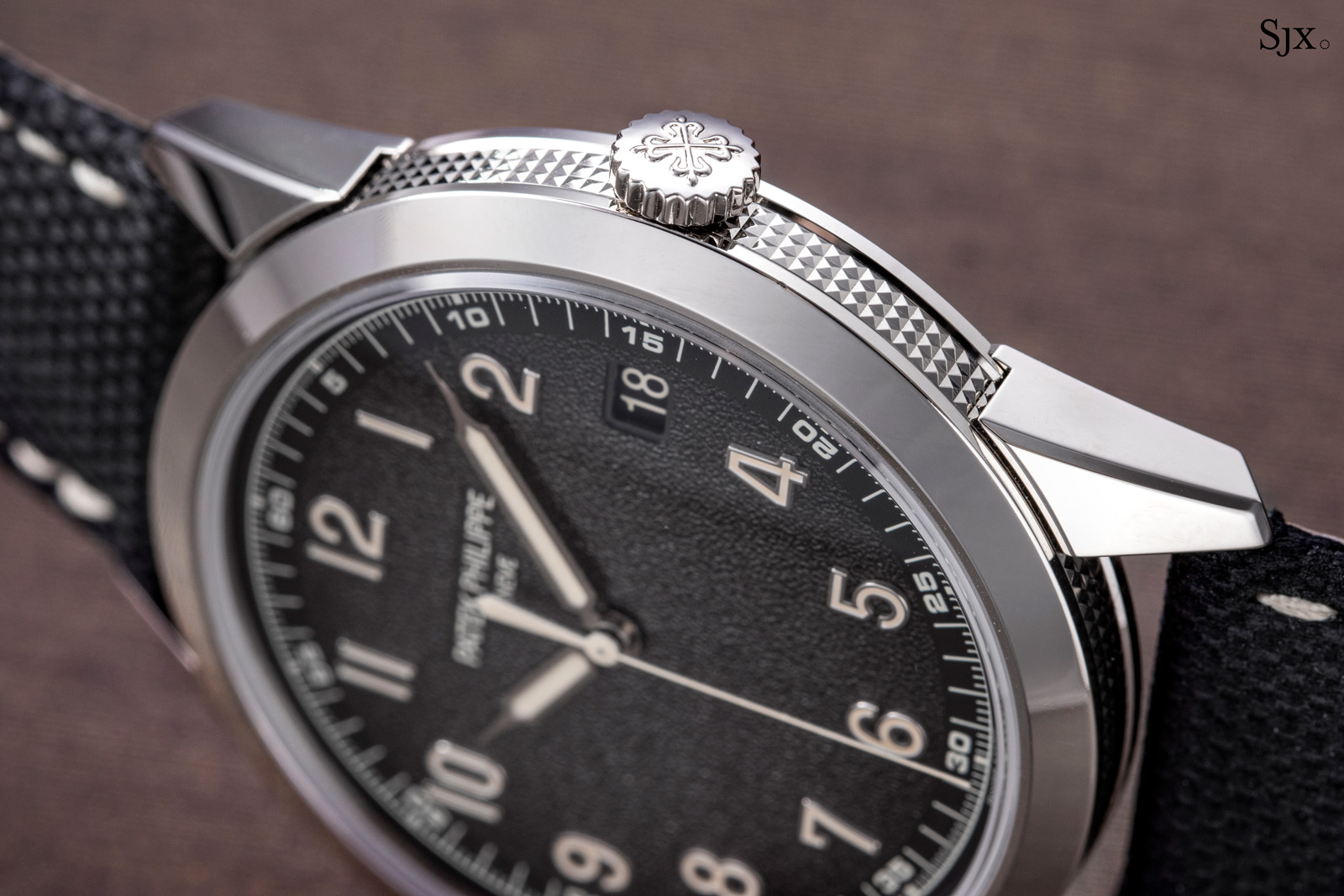 The ref. 5226G with its finely decorated case band

One of the year’s most elegant and unique designs, Pebble reproduces one of Cartier London’s quirky creations of the 1970s, a period when that branch of the jeweller excelled in quirky creations. Though simple in style, it is instantly recognisable as a Cartier, which explains the six-figure values achieved by vintage examples of the Pebble at auction.

But while vintage Pebbles are expensive because they are valuable and rare – only six are known – the modern-day remake is expensive mainly because Cartier has pricing power, for now. It costs about US$44,000, which is a lot for a time-only watch with a simple case containing the Piaget-derived cal. 430 MC. 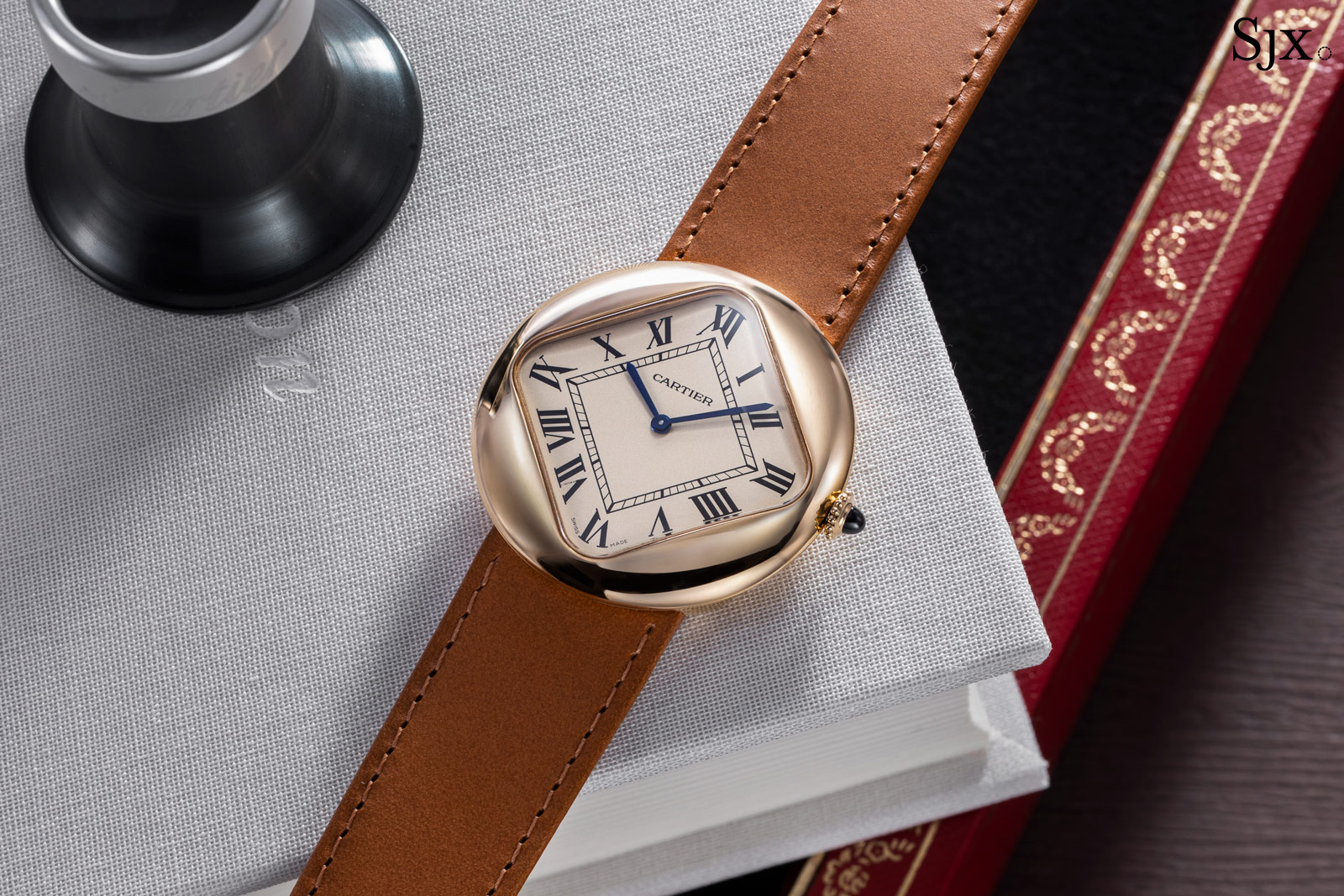 Like the Pebble, the Vacheron Constantin 222 is a good looking watch with lots of intrinsic appeal, but it is a vintage remake so it offers nothing genuinely novel. Relaunched as part of the Historiques collection of vintage remakes, the 222 retains the original size of 37 mm, but is available only in yellow gold for now.

As a remake of Jörg Hysek’s classic from 1977 (unlike its peers of the era that were designed by Gerald Genta), the 222 preserves the design of its integrated bracelet, but refines the bracelet construction for better ergonomics. And inside is the cal. 2455/2, an automatic movement that is robust than the storied but finicky cal. 1120 found in the original. 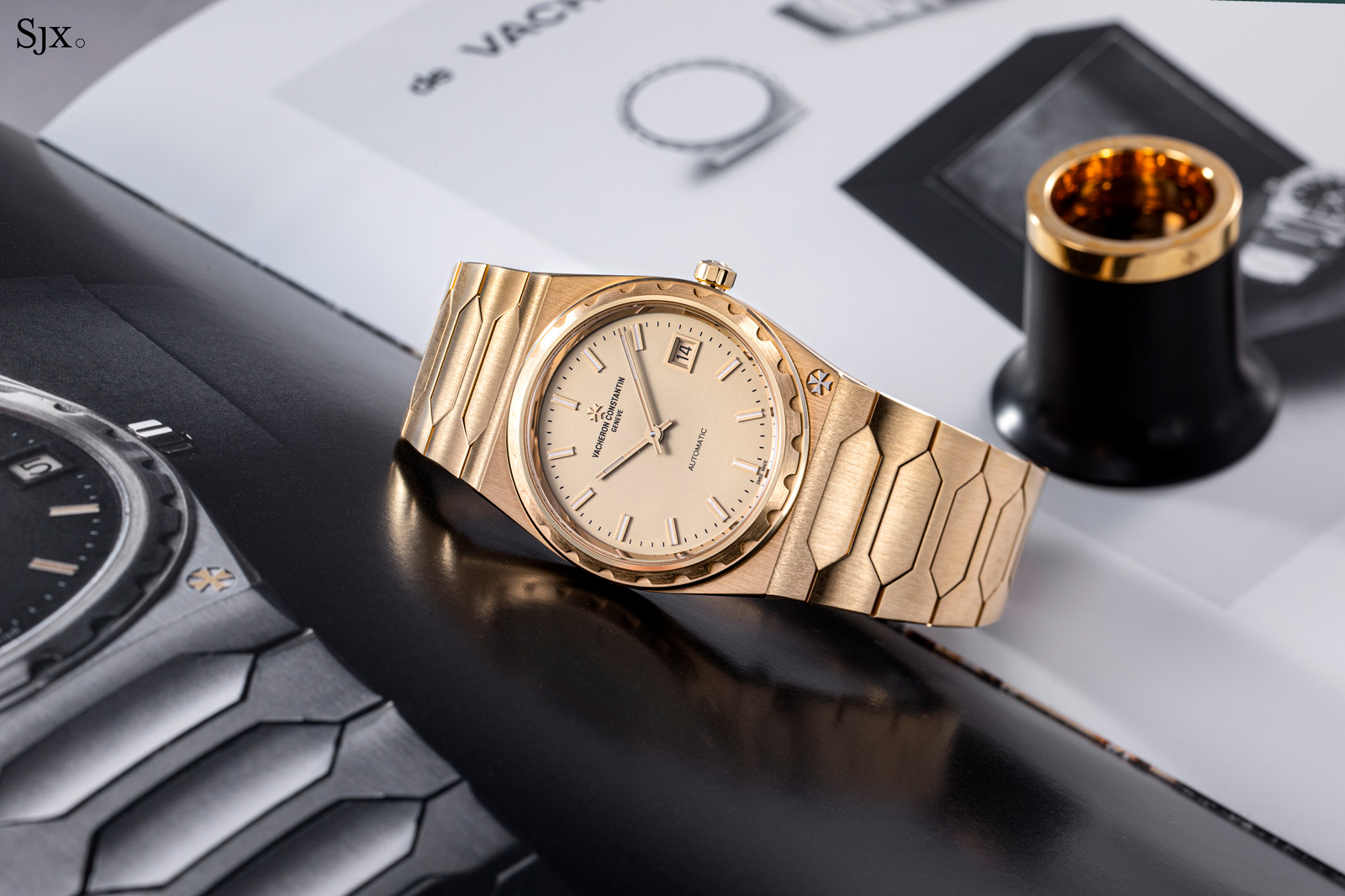 In a surprise announcement late in the year, Rolex released the production version of its experimental dive watch. The Deepsea Challenge is the brand’s first-ever titanium watch.

Patterned after the concept watch that accompanied filmmaker James Cameron to the deepest point of the Marianas Trench in 2012, the Deepsea Challenge has a record-setting water resistance of 11,000 m, albeit in a barely-wearable case of 50 mm by 20 mm that is nevertheless a manageable weight as the case and bracelet are in RLX Titanium.

While this is the priciest non-precious metal watch in the Rolex catalogue, it is arguably worth every penny given the inventive construction and monumental water resistance. And it is perhaps an important statement too – the watch is Rolex announcing that it is, well, Rolex, despite the best attempts by its occasional rival. 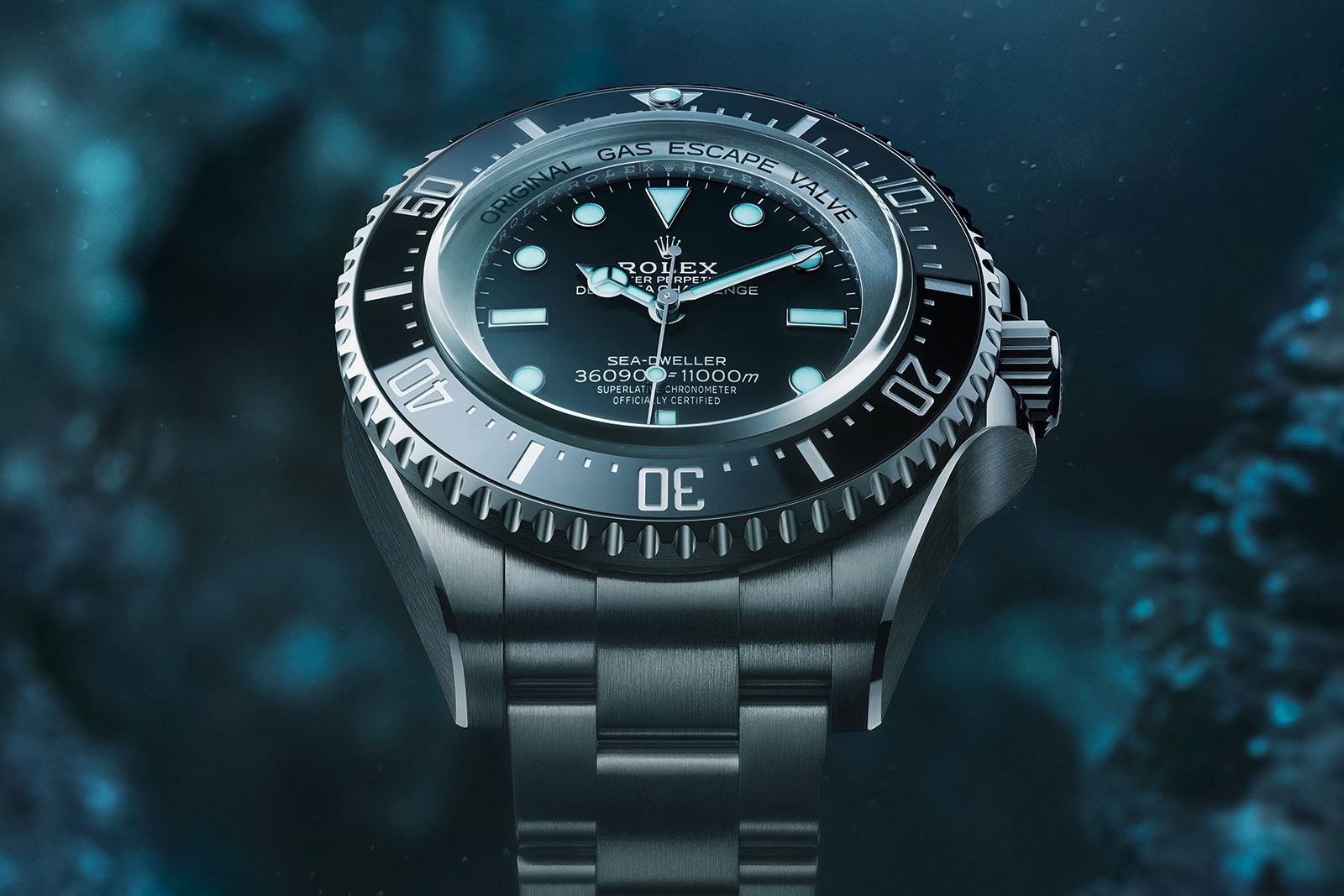 A monster of the deep. Image – Rolex

And the honourable mention goes to a surprising brand, Baume & Mercier (B&M). Granted B&M isn’t exactly an establishment brand, but it is owned by Swiss luxury conglomerate Richemont, which makes it a mainstream name.

Probably the only interesting watch B&M has debuted in a long time, the Hampton Hommage à Pierre Soulages pays tribute to the late French abstract painter. 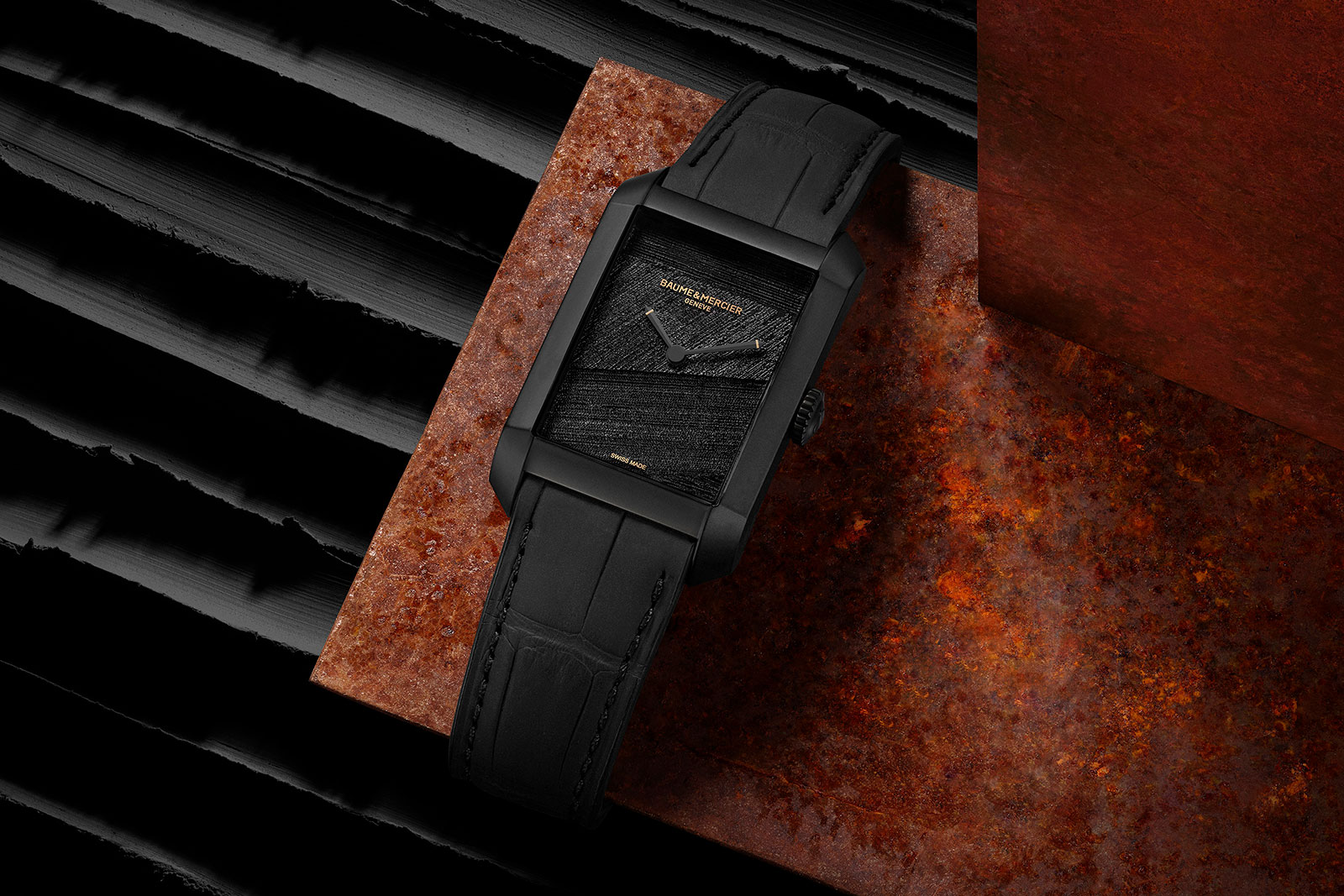 The dial replicates relicating the distinctive, monochromatic impasto of Soulages’ brushstrokes on a minute scale but rich in detail. B&M achieved that with 3D printing – adding tiny amounts of material to build up multiple layers – and finishing it off with semi-matte black lacquer. At just under US$6,000, this is pricey for a B&M (and probably too much given the lack of brand equity), but it is a compelling watch.

An entirely new movement for the 50th anniversary.

A farewell in exotic materials.