Launched to mark 50 years since the original was created by the jeweller’s London workshop, the Cartier Pebble was also perfectly timed to ride the wave of interest in vintage Cartier form watches that began during the pandemic. Looking much like the original but with enough tweaks to set it apart as a modern timepiece, the Pebble reissue is the second commemorative reissue after the Tank Cintrée 100th Anniversary from two years ago.

With only six large-size Pebbles made by Cartier London in the 1970s, the original Pebble was long a peculiar watch known only to a few Cartier aficionados. The reissue has changed that, but it is a limited edition of only 150 pieces, a small enough number that it will leave some would-be buyers disappointed. A hair’s larger than the vintage original, the reissue is a smallish watch by modern standards at 36 mm in diameter but feels larger than that due to the form. In fact, 36 mm is probably the largest it can go without changing the shape; any larger and it will resemble a dinner plate.

On the wrist it cuts a striking figure and unlike other vintage remakes, the new Pebble might pass for a modern watch thanks to its novel form. Minor adjustment have been made to the design of the reissue that give it a more refined appearance than the original. The Roman numerals, for instance, have tighter lines. The result is a watch that looks thoughtfully designed. Everything about the reissue is executed well, case to dial to crown, everything except for the strap. The calfskin strap almost feels synthetic and definitely lacklustre, but fortunately that’s an easy fix, particularly since the watch is delivered with a pin buckle (the lack of a folding clasp will certainly be shortcoming for traditionalists). 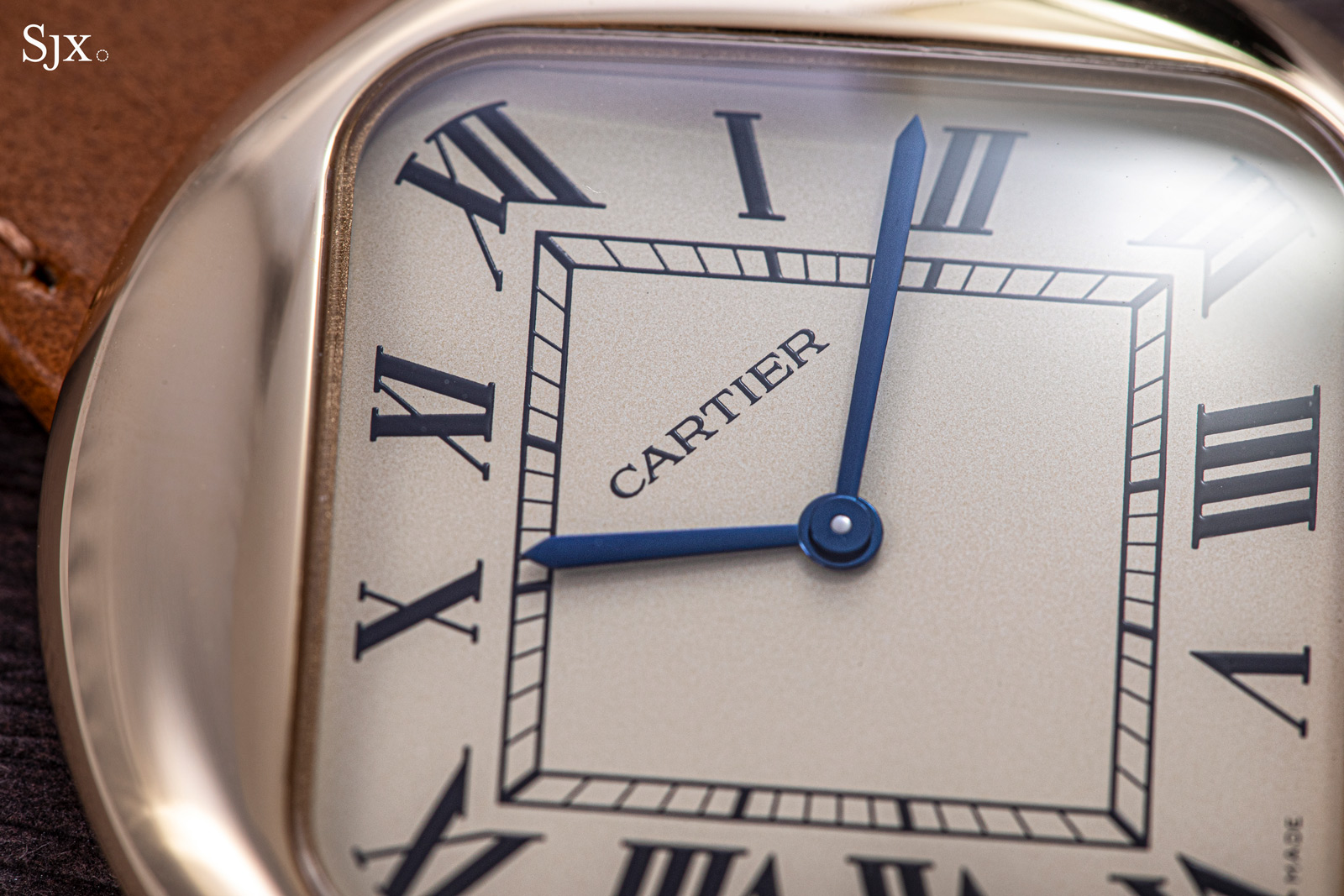 Priced at about US$45,000, the Pebble reissue is pricey. To quote our earlier story on the launch of the reissue: “The Pebble is twice as expensive as the Santos-Dumont lacquered case in gold that has the same movement, and 50% pricier than the Tank Cintrée 150th that has an arguably finer, thinner calibre.”

The pricing feels right for the times, at least until mid-2022 when financial markets started to seriously wobble. Watch brands often set retail price based on the state of the market during good times. The phenomenon probably explains why the Lange Odysseus in titanium costs almost twice as much the same thing in steel.

But of course many of Cartier’s time-only form watches sell for large sums – and collectors are more than happy to pay. An obvious comparison is the Crash that was also created by Cartier’s London workshop. But the Crash was made in larger numbers, enough that is widely known. The fact that its shape is Dali-esque also contributes to its status in the popular imagination. 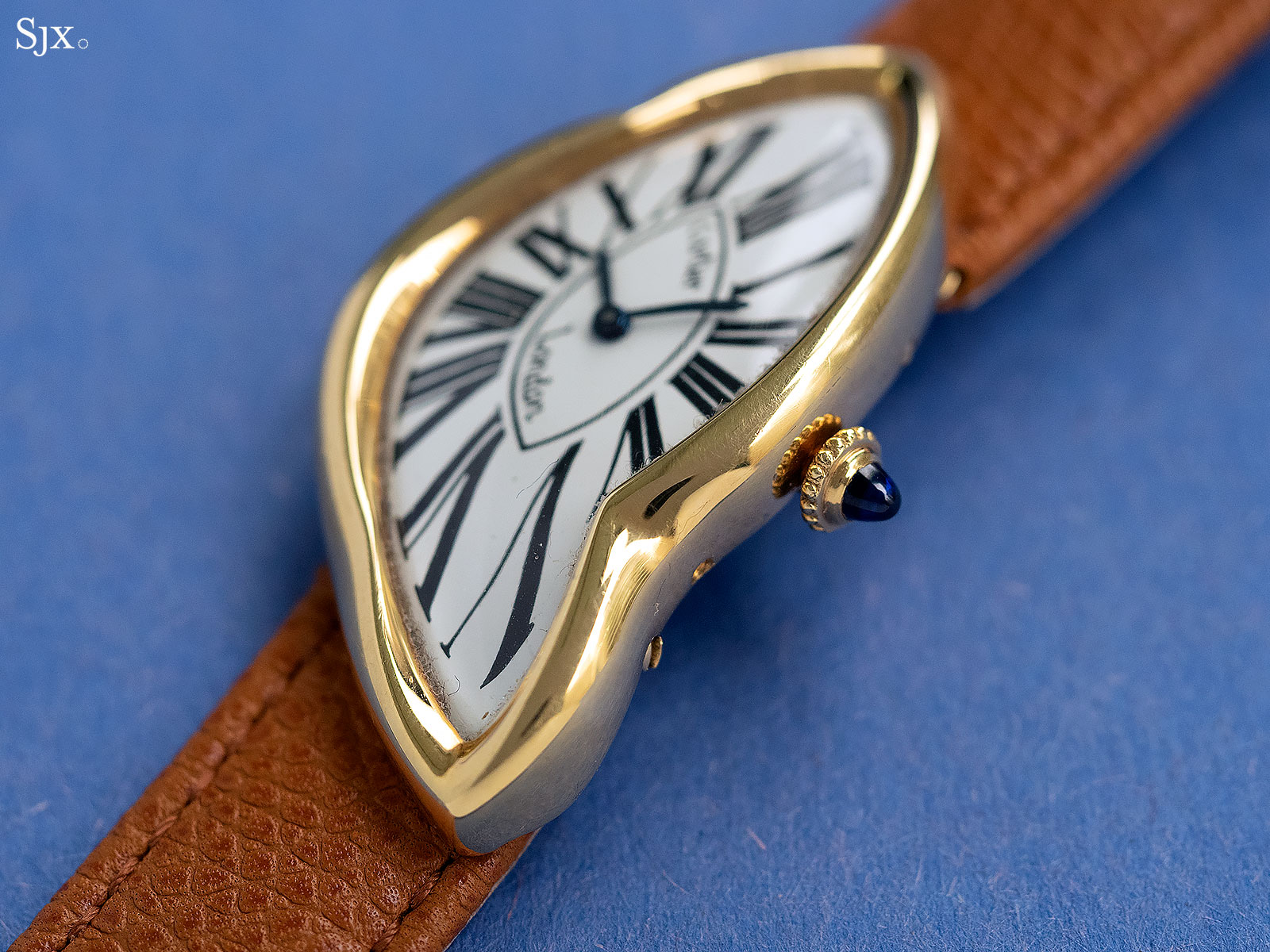 On the other hand, the Pebble was esoteric until the reissue came along. For one, the original was produced in smaller numbers than the Crash and never really talked about until two vintage examples sold for six-figure sums last year. And while novel, the Pebble is certainly not as imaginative as the Crash. Consequently, the Pebble doesn’t rank high up with the Crash as one of the most important form watch designs.

That said, the Pebble reissue is unquestionably an intrinsically appealing watch that is interesting in terms of design and also feels good on the wrist. It gets almost everything right, except for the price. Elegantly simple, the Pebble is just a square within a circle. But it is almost entirely rounded on all planes – even the square has round corners – giving it an almost sensuous feel.

At 36 mm in diameter, the reissue is wider than the original by about one millimetre. The proportions are also slightly different, resulting in the reissue appearing to be bigger than its 36 mm. 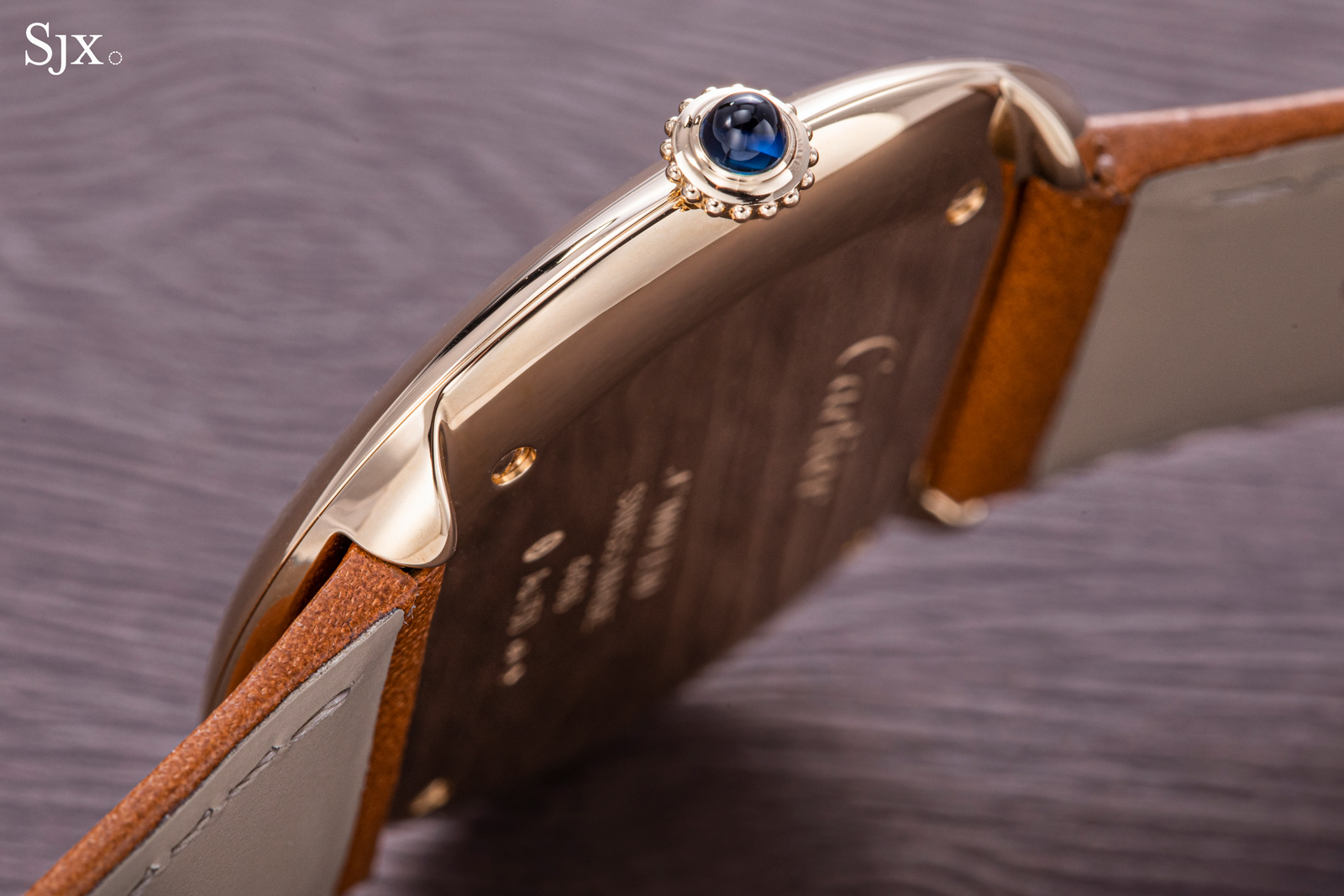 The construction of the case, however, appears to the identical to the original, at least on the outside. The back is secured by four screws, while the lugs take the form of tiny stubs that protrude downwards from the case middle. These unobtrusive lugs create the visual illusion  that the strap flows seamlessly into the case. 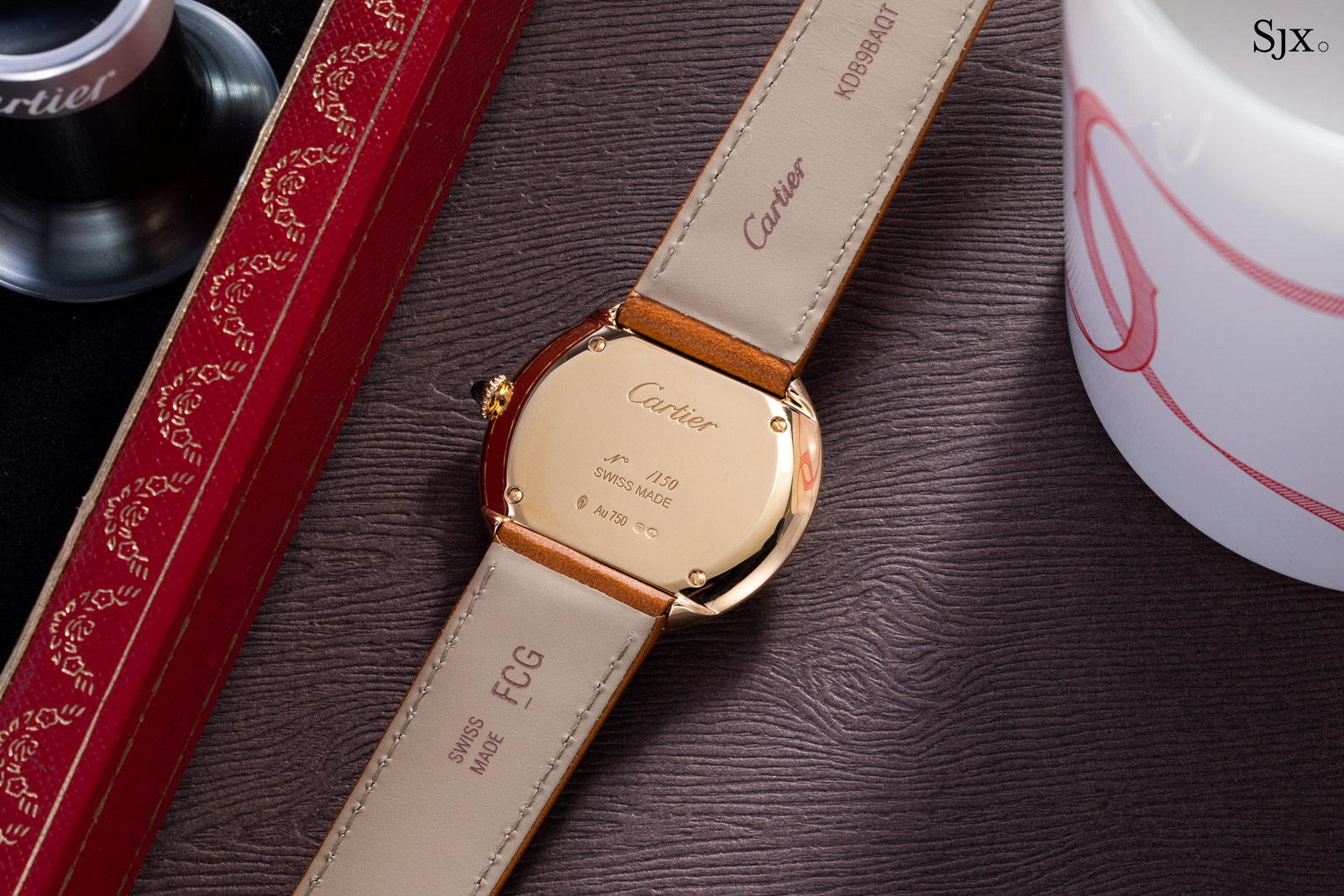 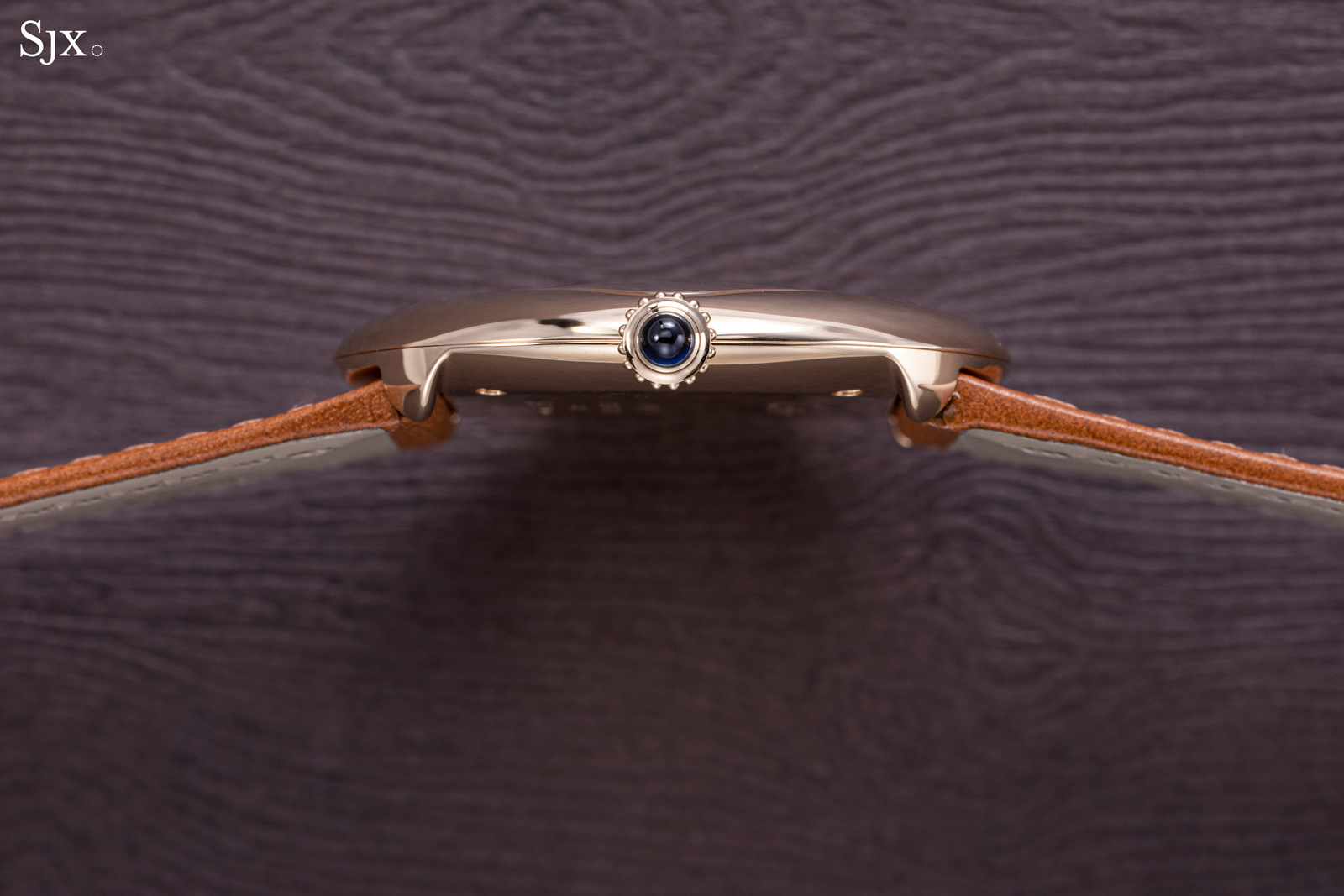 A less obvious difference between the reissue and the original is the crystal. The original’s PlexiGlas crystal appears to be more domed and thicker than the sapphire crystal on the reissue. This is another element that contributes to the reissue looking contemporary. 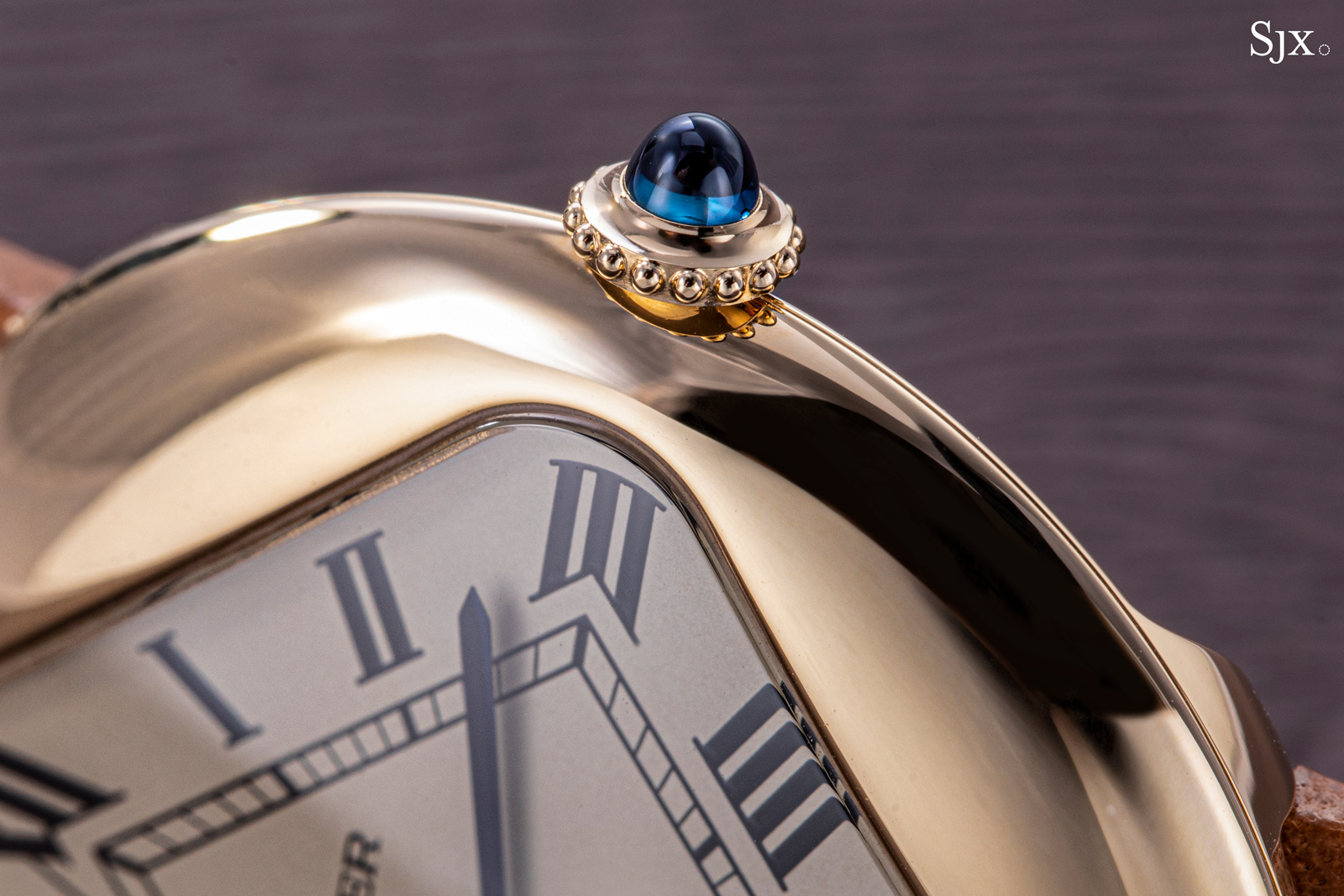 Like the Tank Cintrée 100th Anniversary reissue of 2020, the Pebble remake has a parchment-tone dial that gives it a faintly vintage feel. But because everything about the dial is crisp and clean, it is unmistakably a modern creation.

The dial of the reissue is undoubtedly superior to that of the vintage originals. Most Cartier London watches, like the originals were, had dials with printing that was of questionable quality. In contrast, the reissue’s dial is finely grained and neatly printed. 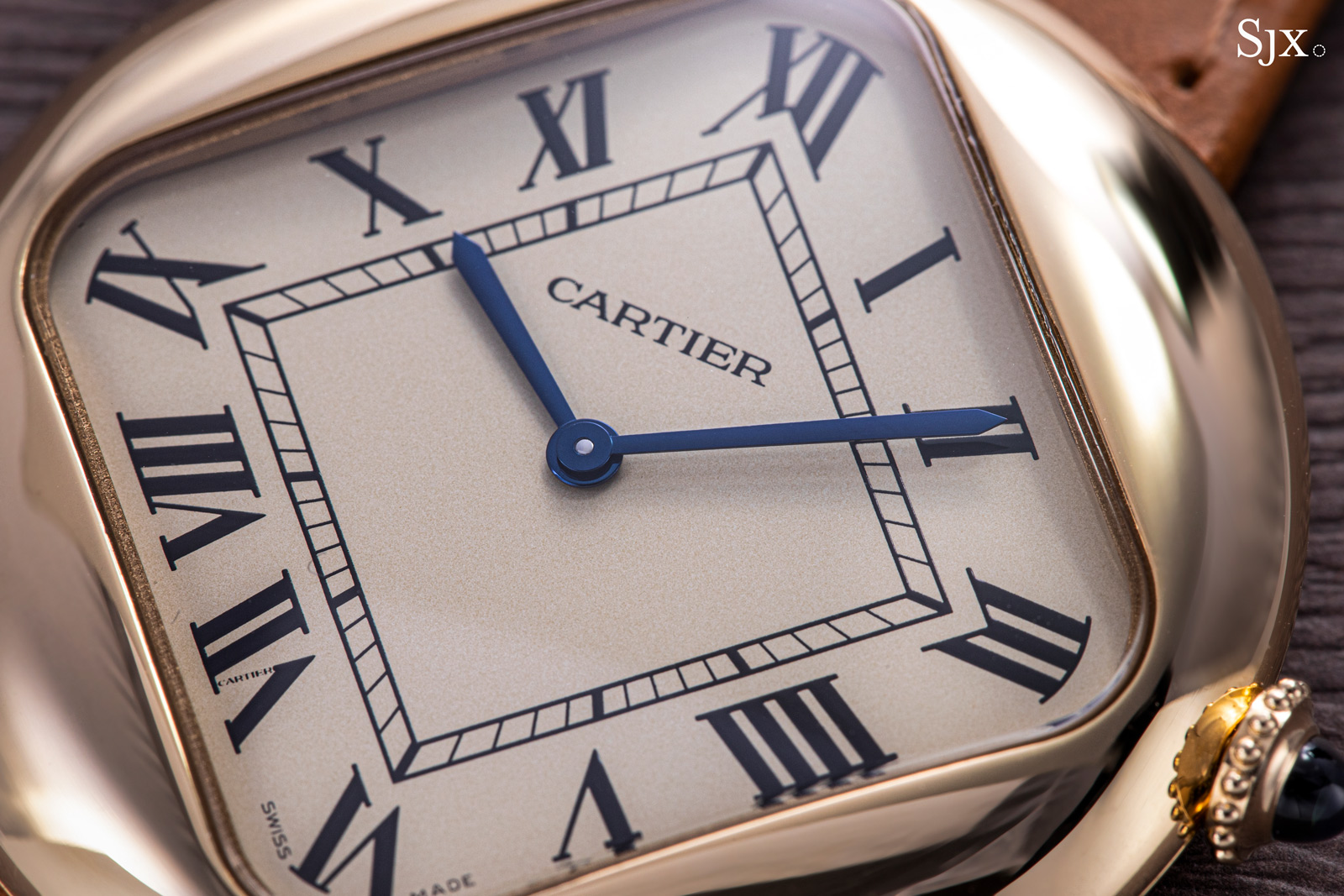 The dial also now incorporates the Cartier “secret” signature within “VII”, as is tradition for modern Cartier watches but absent on the original. Another notable change is the Cartier logo under 12 o’clock. It now takes the form of the jeweller’s modern-day logo, while the originals all featured a retro cursive logo that is no longer used. 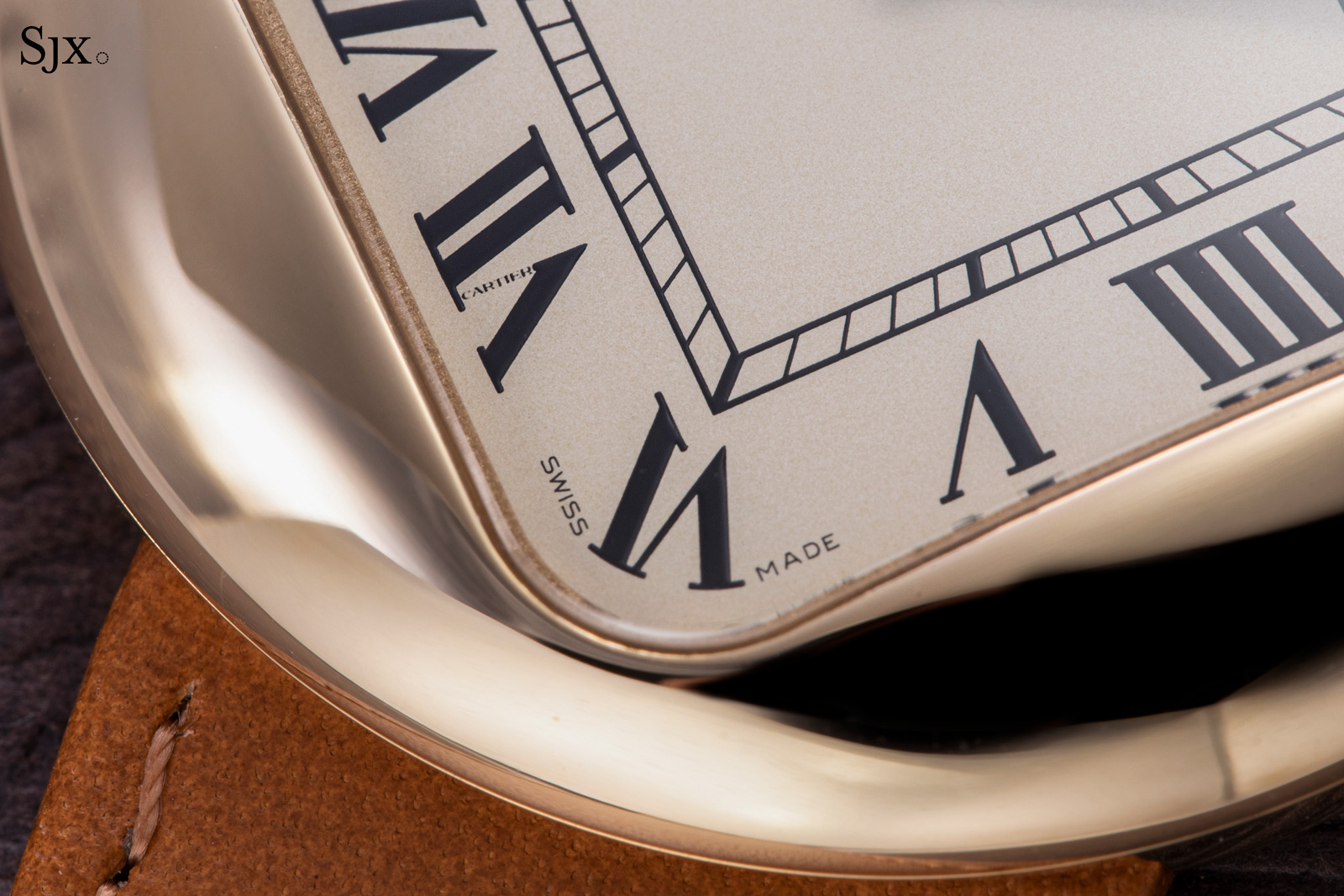 Under the solid back sits the cal. 430 MC. Made by Piaget, the movement is also known as the cal. 430P. It was introduced in 1990 and is one of the longest-lived movements in Piaget’s line-up with a reliability that’s been proven by its longevity. In fact, it is robust enough that both Cartier and Piaget have used the movement as a base for a variety of other calibres. The cal. 430 MC is frequently found in Cartier’s form watches because it is compact in both height and diameter – measuring 2.1 mm by 20.5 mm – allowing it to fit inside small or narrow cases. It’s almost the default movement for the brand’s small, manual-wind watches like the Santos-Dumont lacquered case.

But the size brings with it a small mainspring, which limits the power reserve to just 38 hours. That’s equivalent to about a day in everyday wear, which means this watch has to be wound daily to keep it running.

The original Crash is reborn (with diamonds too).