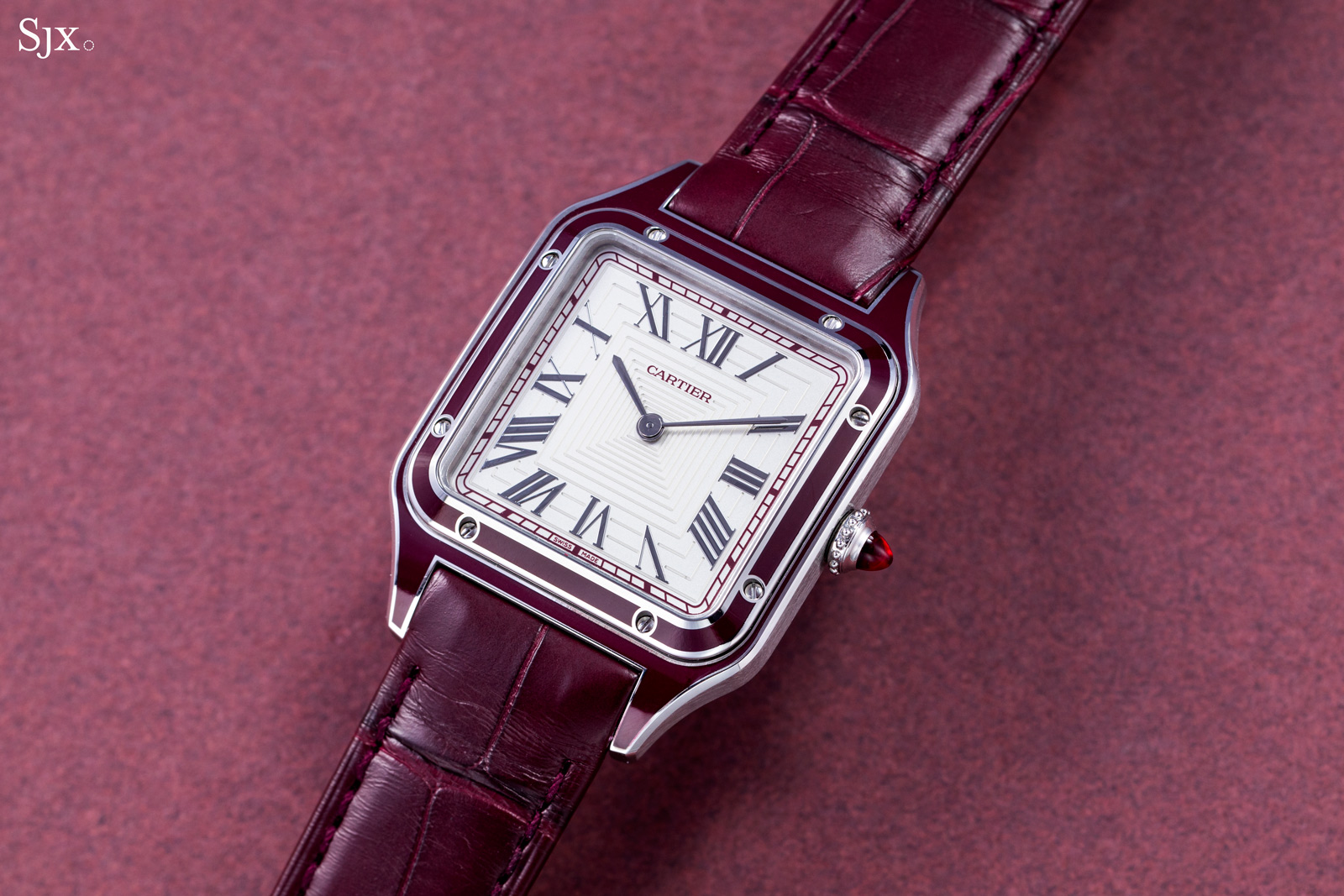 Originally conceived as a pilot’s watch when it was created over a century ago – as one of the first-ever wristwatches in fact – the Santos is not even remotely sporty in the modern sense of the term. Instead the Santos is an elegant watch that is quintessential Cartier.

Earlier this year, the Parisian jeweller recently gave its trademark square watch a bold makeover when it debuted the Santos-Dumont Large Model Lacquered Case. Featuring a bezel and case covered in lacquer, the new Santos-Dumont was unexpected and certainly one of the most intriguing iterations of the models to date, yet it easily feels like quintessential Cartier. 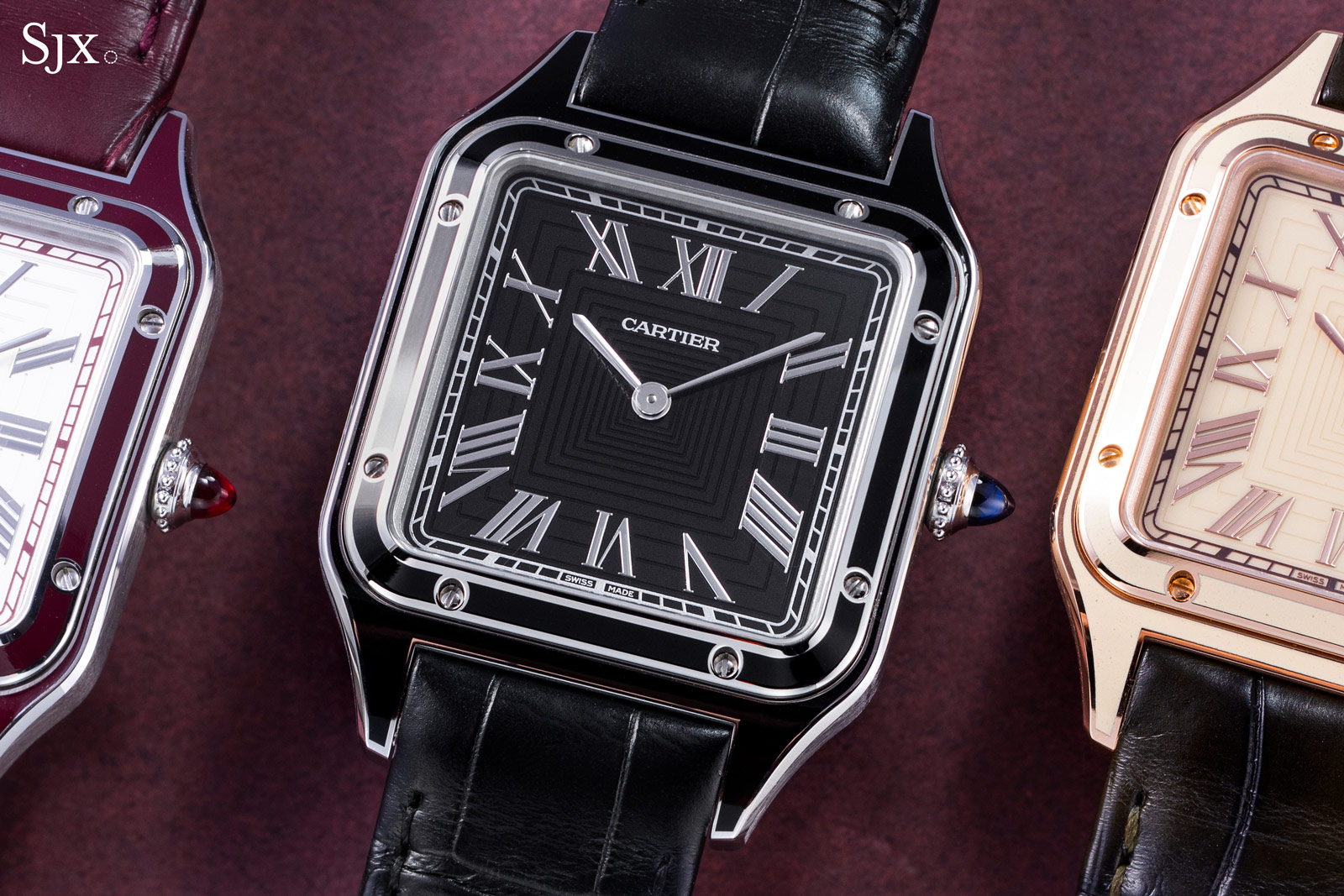 The steel version with black lacquer

The lacquered Santos-Dumont is an achievement given that the original is so established, perhaps the bestselling square watch in history. Though the case is inspired by a vintage Santos with a lacquered bezel dating from the 1920s, the new Santos-Dumont still feels satisfyingly original. It obviously reimagines a familiar design, one so familiar it might have even become tired, but manages to translates it into something entirely different. 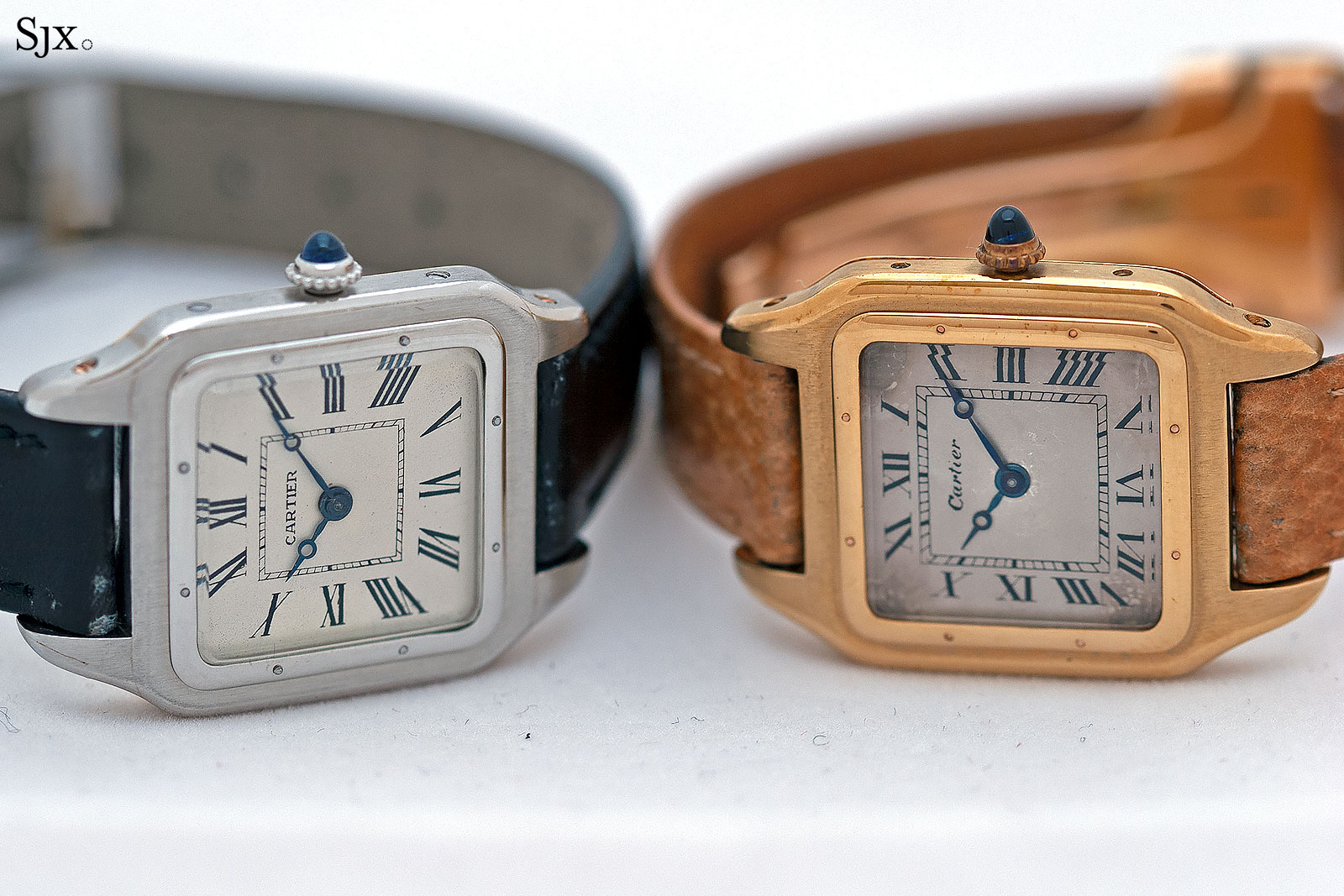 A pair of vintage Santos watches from around 1910, both part of the Cartier Collection

In fact, the lacquered Santos-Dumont stands apart not only from earlier Santos models but also the competition. While brightly-coloured dials are now common for dress watches, the same cannot be said of the case. As a result, this is one of the most interesting Cartier watches from a design perspective, which is an achievement, especially since the Santos has been around for so long. 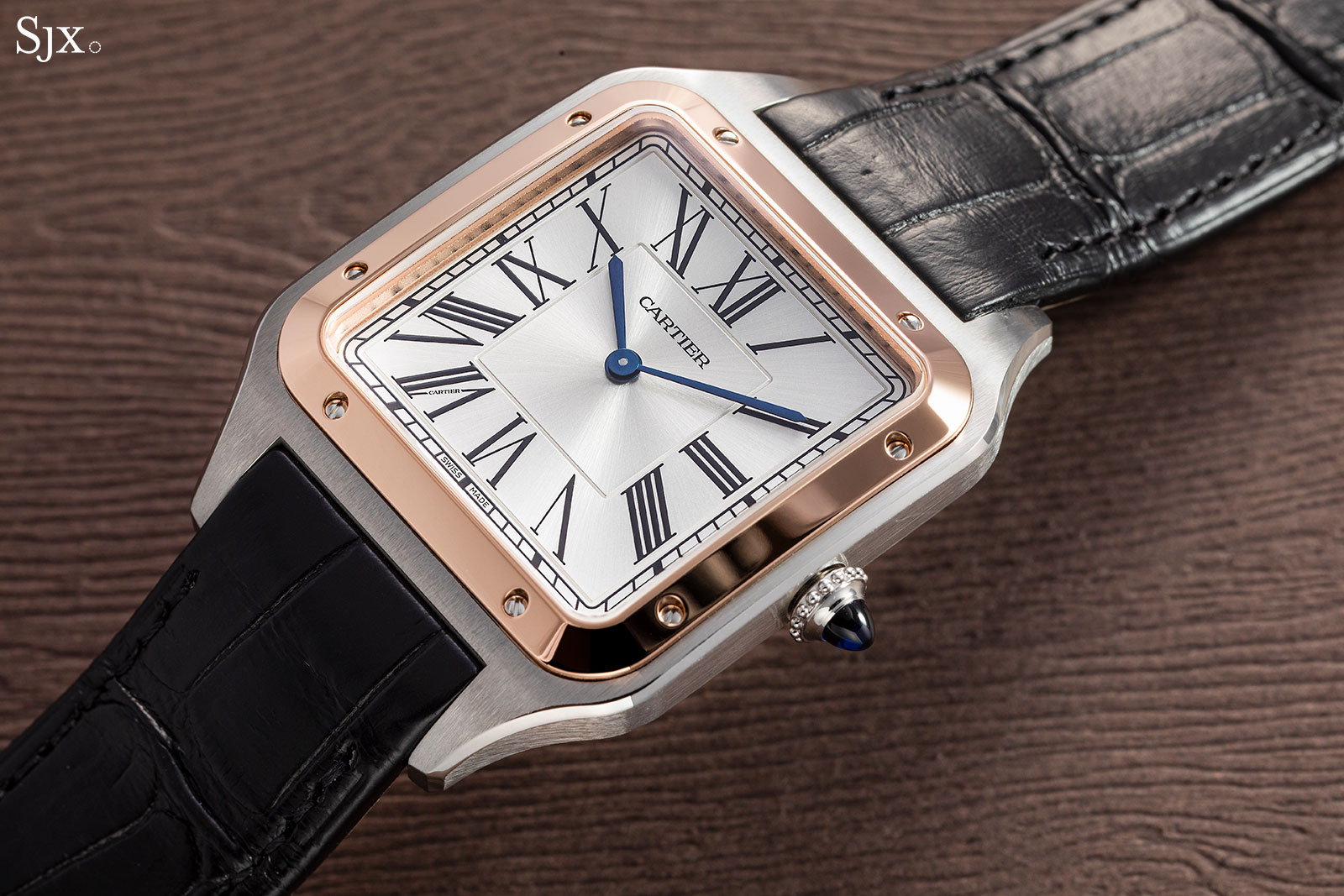 A homage to the 1904 original, the Santos-Dumont XL with a striking two-tone case is certainly an elegant everyday watch but one that is very conservative in style

While I appreciate traditional Cartier designs for their grace, such vintage-inspired pieces don’t offer much in terms of innovation or novelty. That isn’t a criticism per se, such designs are meant to resemble the originals after all, but the many iterations of an old design does diminish the appeal of the latest model.

The lacquered models, however, are classical in form but novel in execution, which gives them more character. With the case and bezel unchanged, the trio are evidently old-school Santos, but the lacquered inlays make them special enough to be memorable. In fact, I imagine they will age well and still be fondly remembered a long time from now. 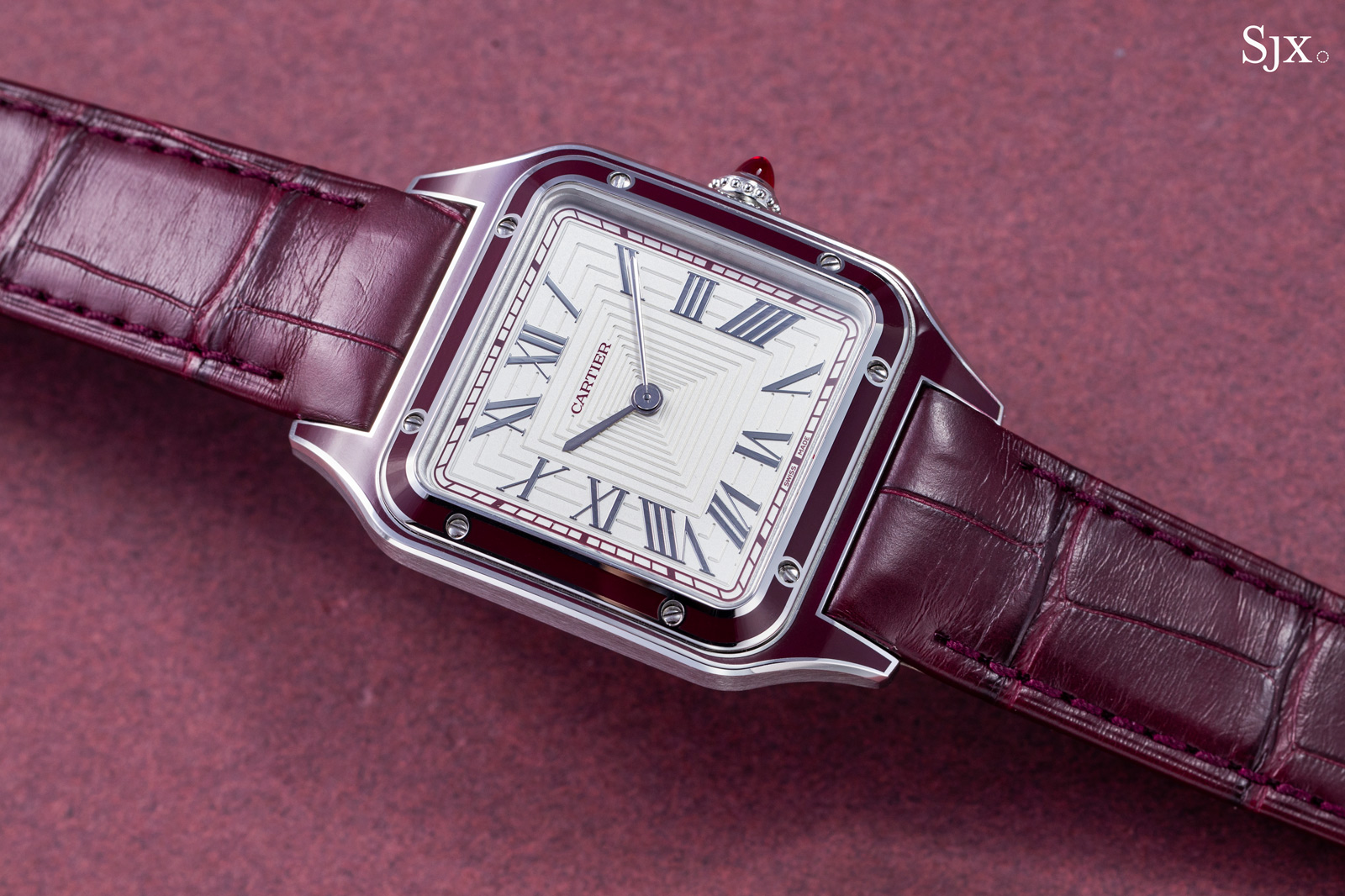 The platinum model with burgundy lacquer

And the pricing certainly adds to the appeal. All three versions cost only slightly more than their non-lacquered equivalents, making each of them a compelling buy within their price category.

Notably, the new Santos-Dumont is offered in stainless steel, which is uncommon for Cartier watches with a special finish or design as those tend to be limited editions. More importantly, the steel version costs under US$6,000, which is good value considering not just the unusual execution but also the ultra-thin, hand-wind Piaget movement inside.

The new case decor, along with the new concentric-cube patterned dial, help distinguish the new model from its more ordinary counterparts in the Santos-Dumont line. In fact, both the case and dial are unique in the brand’s catalogue, though I expect this won’t be the last of either given the strong commercial debut of the model.

A lacquered case, however, isn’t for everyone. Perhaps to cater to as many as possible, Cartier has created three starkly different variants ranging from the most subtle in rose gold and cream to the daring in platinum and burgundy. My favourite is the version in warm rose gold

In between the two polar opposites in precious metal is the black-lacquered version in steel that calls to mind the Santos with a ADLC-coated bezel. This new model, however, this is more coherent in terms of style since the bezels and lugs are matched in black lacquer. 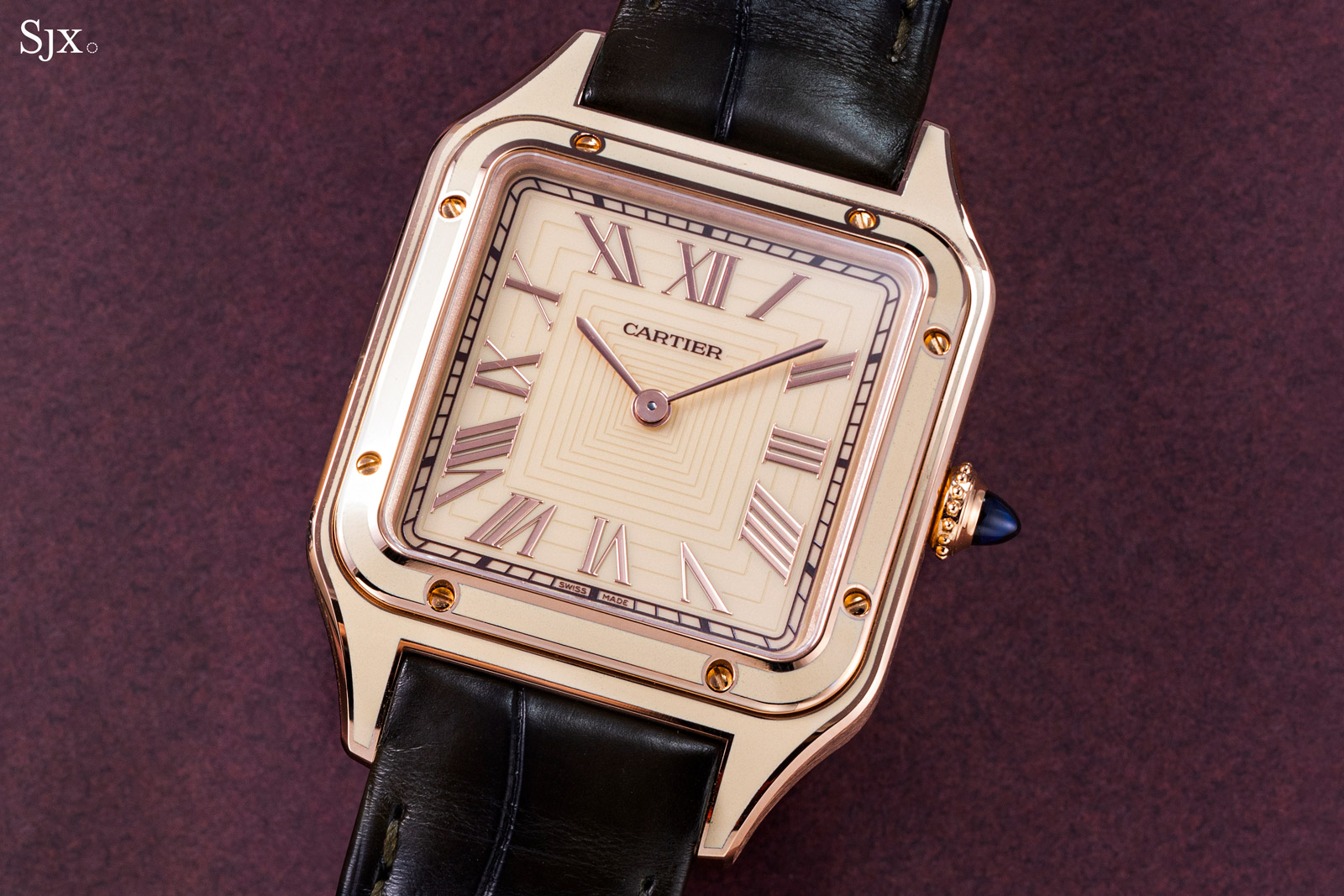 The rose gold case is matched with rich, cream lacquer

There are three versions of the watch, but all are the same “Large” size, in between the Extra-Large and Small models.

Interestingly, this in-between size is the least numerous of the three in terms of variety, as it is typically used for limited editions or pricier, precious metal models.

On the other hand, Small models are the most affordable, but very small and the only size that’s quartz, while the Extra-Large case is very flat and wide and is available in all metals including steel. 7.3 mm from back to crystal

It makes sense for the platinum and gold versions of the lacquered Santos-Dumont to be in the compact Large case since it’s a more elegant size, but the steel-and-black model should arguably be Extra-Large given its more contemporary feel.

The steel model looks just right with formal wear, so I like it as it is, though I imagine a larger size would give it the versatility to be a casual, everyday watch. Regardless of the size, it’s the lacquered inlays that make this special. Flush with the case such that it seems to be a thin painted layer, the lacquered decoration is actually an inlay.

It’s done in a three-step process that starts with engraving the a Santos-Dumont case to create recess for the lacquer. The narrow recesses are filled with synthetic lacquer and then baked in an oven to set, before being polished to create a smooth, flush surface. The last step is the application of a thin layer of clear, protective varnish over the lacquer, which is necessary as the lacquer is softer than steel. 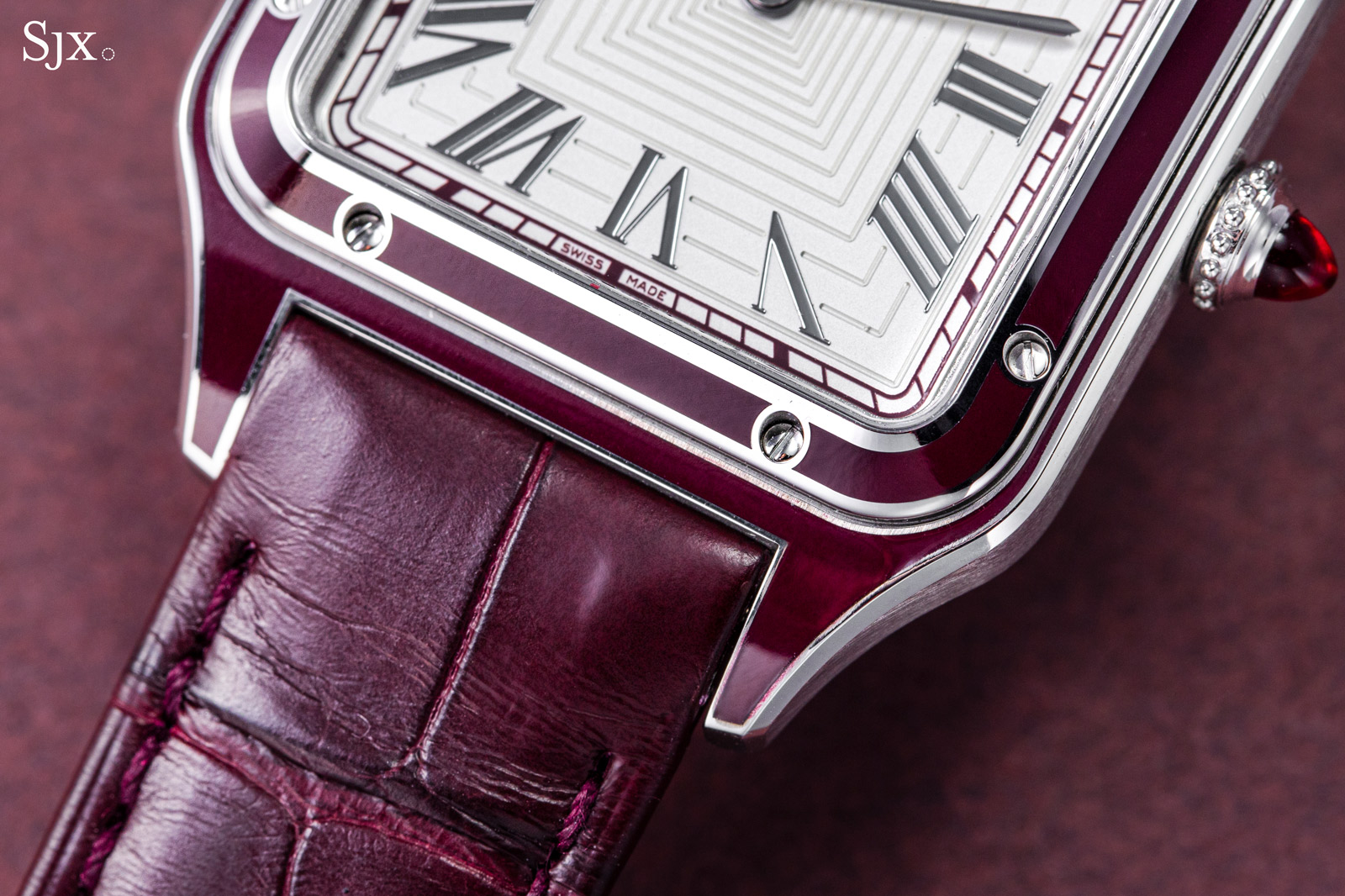 Pictured here are the prototypes, explaining the less-than-tidy lacquering on some edges

The rest of the case is identical to that of the standard Santos-Dumont and finished simply but well enough to give the watch a sense of refinement that is certainly meets the requirements demanded by the price.

Two elements stand out: one is the mirror-polished bevel along the edge of the case, while the other is the elaborate, studded crown capped with a cabochon that is classic Cartier style. But it serves a practical purpose as the studs improve grip and facilitate hand winding. 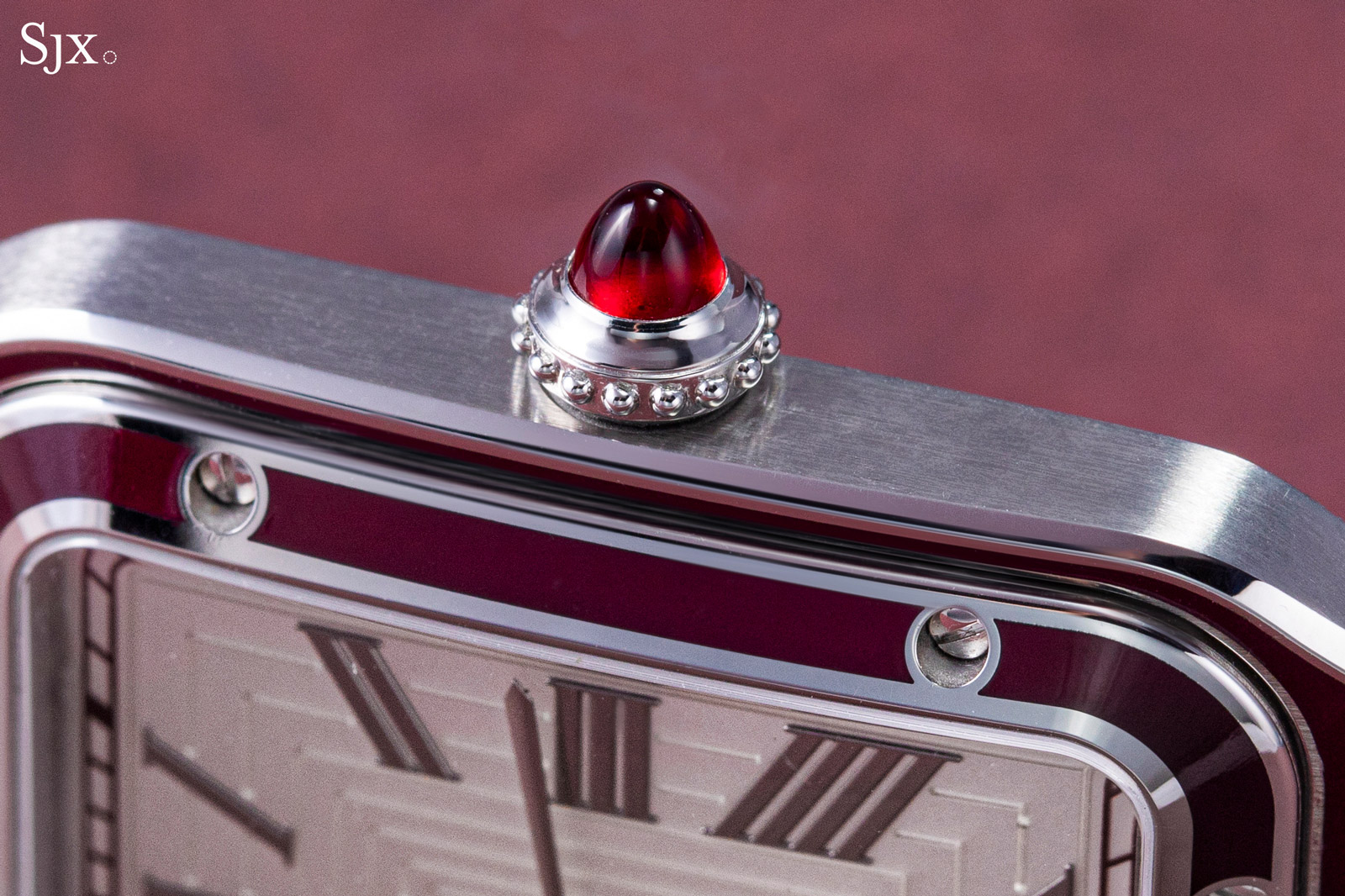 The platinum version gets a ruby cabochon on the crown as is tradition at Cartier, while the other versions get a blue spinel

And a new dial

The classic Cartier dial is silvered and either grained or guilloche, but in recent years more finishes have become more varied and adventurous. Take for instance the latest Tank Must that has dial with a two-tone finish that’s the result of electrochemical texturing.

In the same vein, the new Santos-Dumont has an unconventional finish. It’s essentially a modern guilloche that’s made up of deeply grooved lines in a concentric cubic pattern, with the lines widely spaced so the aesthetic is entirely modern.

The concentric cubic pattern is a first for Cartier and still unique in the line up. It is a perfect match for the Santos case, however, so I expect to see it in other models. A detail that emphasises the concentric cubic pattern is the contrast-colour railroad minute track, which is matched by an identically coloured logo under 12 o’clock. Both are done in colours that stand out from the dial, on the platinum model for example they are printed in burgundy.

The minute track in particular is a subtle but bold detail that complements the dial pattern by echoing the case colour and functioning as a visual border for the dial. 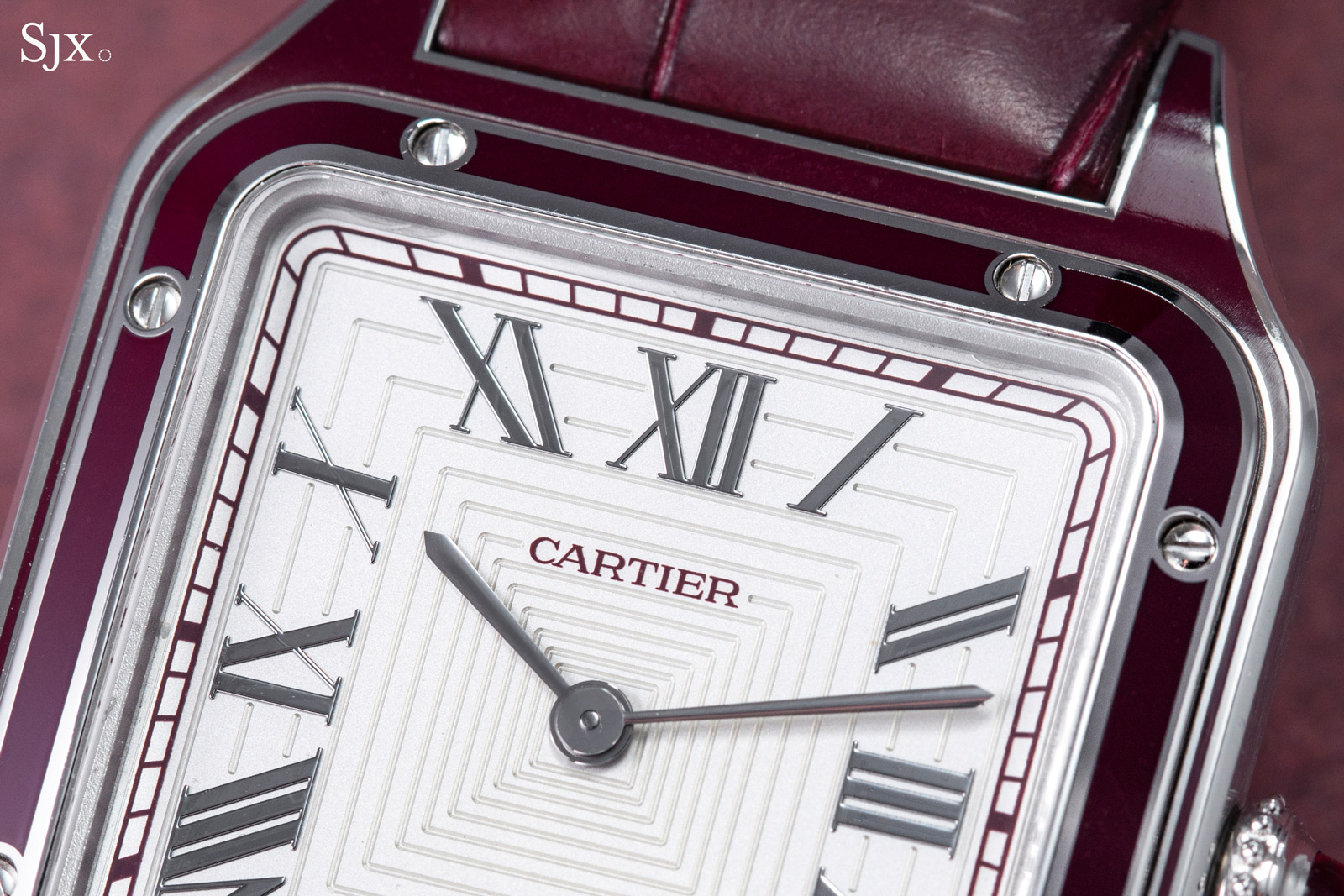 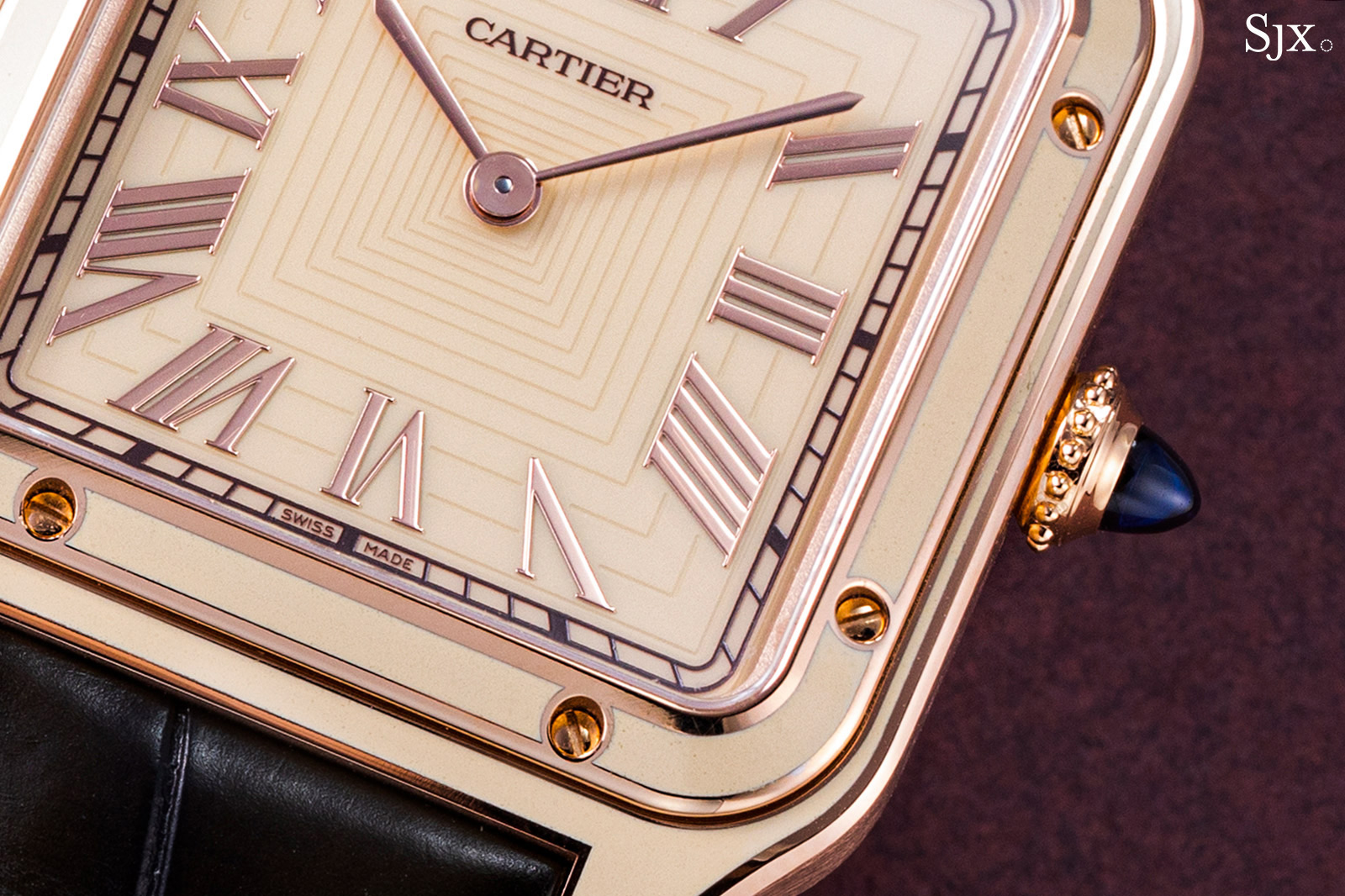 At a distance, the milled lines on the dial are less obvious on the cream dial and almost invisible on the black dial

Upon closer examination, it becomes clear that dial is very different from traditional engine turning or even stamped guilloche. Though the lines appear to be printed in relief from some angles, they are actually deeply engraved.

The profile of the grooves and their corners reveal that the lines are machined – almost certainly milled with a round-tipped drill bit in a CNC machine – rather than stamped as is typical for guilloche dials in watches in this price range. The rationale for the engraving finish lies in the fact that a negative stamping die necessary for such a deep pattern will probably create slightly distortion in the dial surface. With help from Piaget

Finally, the movement within the watch is the cal. 430 MC, the same calibre found in most hand-wind Cartier watches for men. It’s actually the extra-thin Piaget cal. 430P, a compact round movement that’s just 20.5 mm wide and 2.1 mm tall, making it suitable for form watches. For comparison, the de facto small hand-wind movement when it comes to ETA’s offerings, the Peseux 7001, is just over 23 mm in diameter and 2.5 mm thick.

Having been used extensively by both Piaget, Cartier, and a few other Richemont brands for decades, the cal. 430 MC has been proven to be dependable. It is presumably also cost efficient, explaining why the steel version of the lacquered Santos-Dumont costs what it does. That said, its age means the cal. 430 MC has a modest power reserve of just 38 hours despite a low frequency of 21,600 vibrations per hour (3 Hz). That’s short by modern standards, especially where three-day movements are increasingly the norm, but a quarter-century ago the industry standard was 40 hours or so. The short power reserve is also explained by the small dimensions, which means the mainspring is short and flat.

Though the calibre is hidden behind a solid back, the finishing will surely be similar to that of past Cartier and Piaget models with an open back. That means it’s likely to be neatly but industrially finished. The standard Santos-Dumont watches are elegant but conventional, while the Santos-Dumont Lacquered Case is special because it is different yet still elegant. It is arguably one of the few reinterpretations of a black-tie watch that is bold.

Given the fact that the precious metal versions of the watch are limited editions in relatively small runs, the lacquered case might also be collectible. That said, for a brand as large as Cartier, nothing is really ever a one-off, so I would imagine the lacquered case will make an occasional comeback given how good it is.

Cartier Introduces the Santos-Dumont with a Lacquered Case

A strikingly different take on a classic.