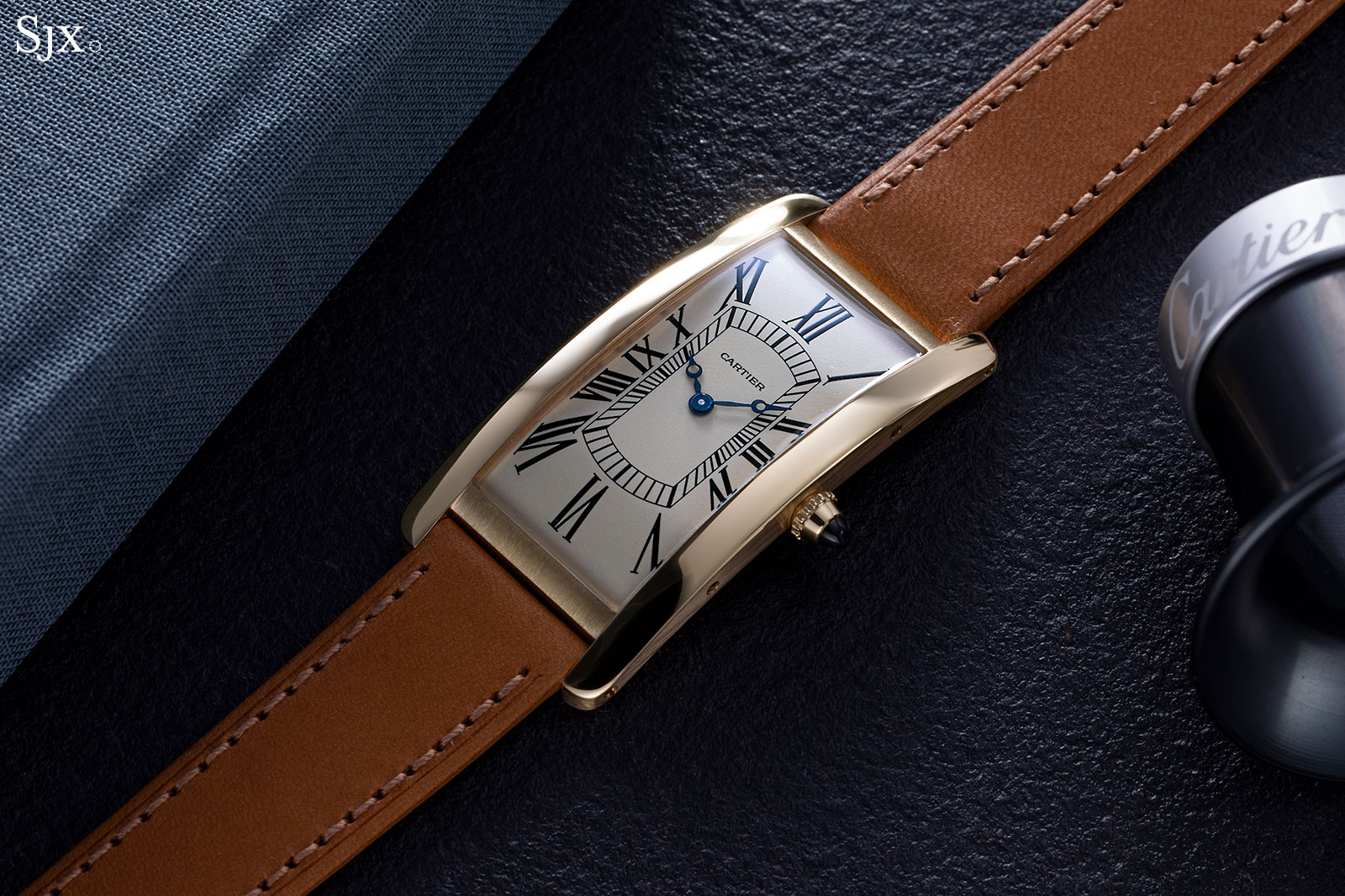 Announced quietly late last year and already in stores, the Cartier Tank Cintrée 100th Anniversary (ref. WGTA0057) is a limited edition to mark the centenary of the jeweller’s formal watch for men.

A handsome watch that faithfully replicates nearly all elements of the vintage original, the anniversary edition is distinct from the 2018 Tank Cintrée in both case and movement. In fact, the anniversary model is actually a revival of the 2005 Tank Cintrée. The elegance and refinement, however, comes at an unusually high price. The Tank Cintrée is a formal watch, with all the elegance and simplicity that dictates, while being a form watch, instead of a plain, round shape that most dress watches are. That’s the singular talent of the Tank Cintrée, explaining why it remains appealing after a century.

Practically a one-to-one remake of the 1920s Tank Cintrée, the anniversary edition – like most other vintage remakes – scores high on beauty since the original was attractive, but low on imagination and novelty. And more notably, the anniversary edition is a revival of the a more recent watch, the Tank Cintrée in yellow gold of 2005 – both have the same case and movement.

Perfectly executed as a remake, the anniversary edition reproduces the look of a vintage original well in all aspects. But the anniversary edition approximates how a 1920s example would look today, after a century of ageing, rather than how it looked when brand new. I would have preferred the a fresher look, instead of a modern watch that looks old. Still, it is a good looking watch, as the original was. 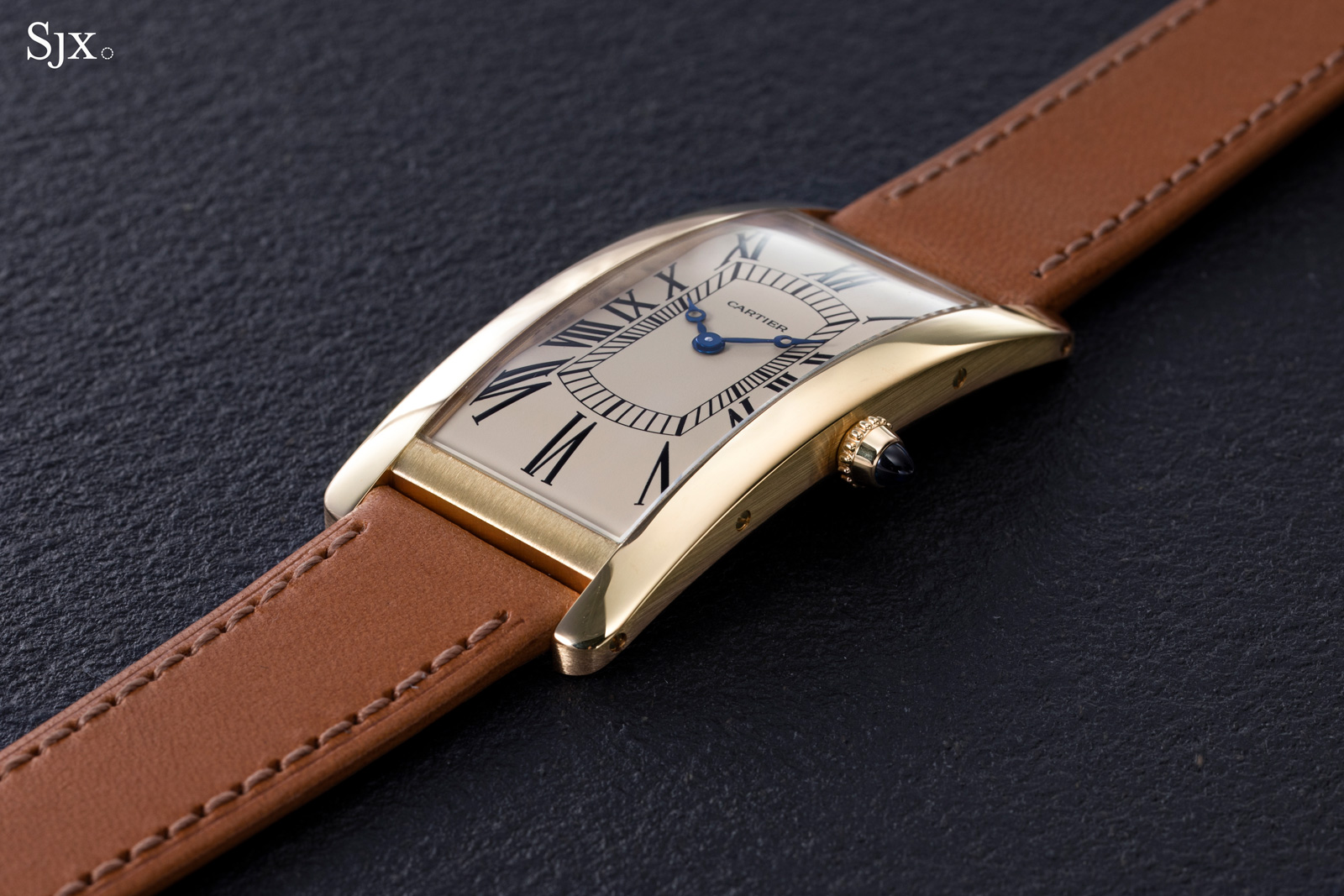 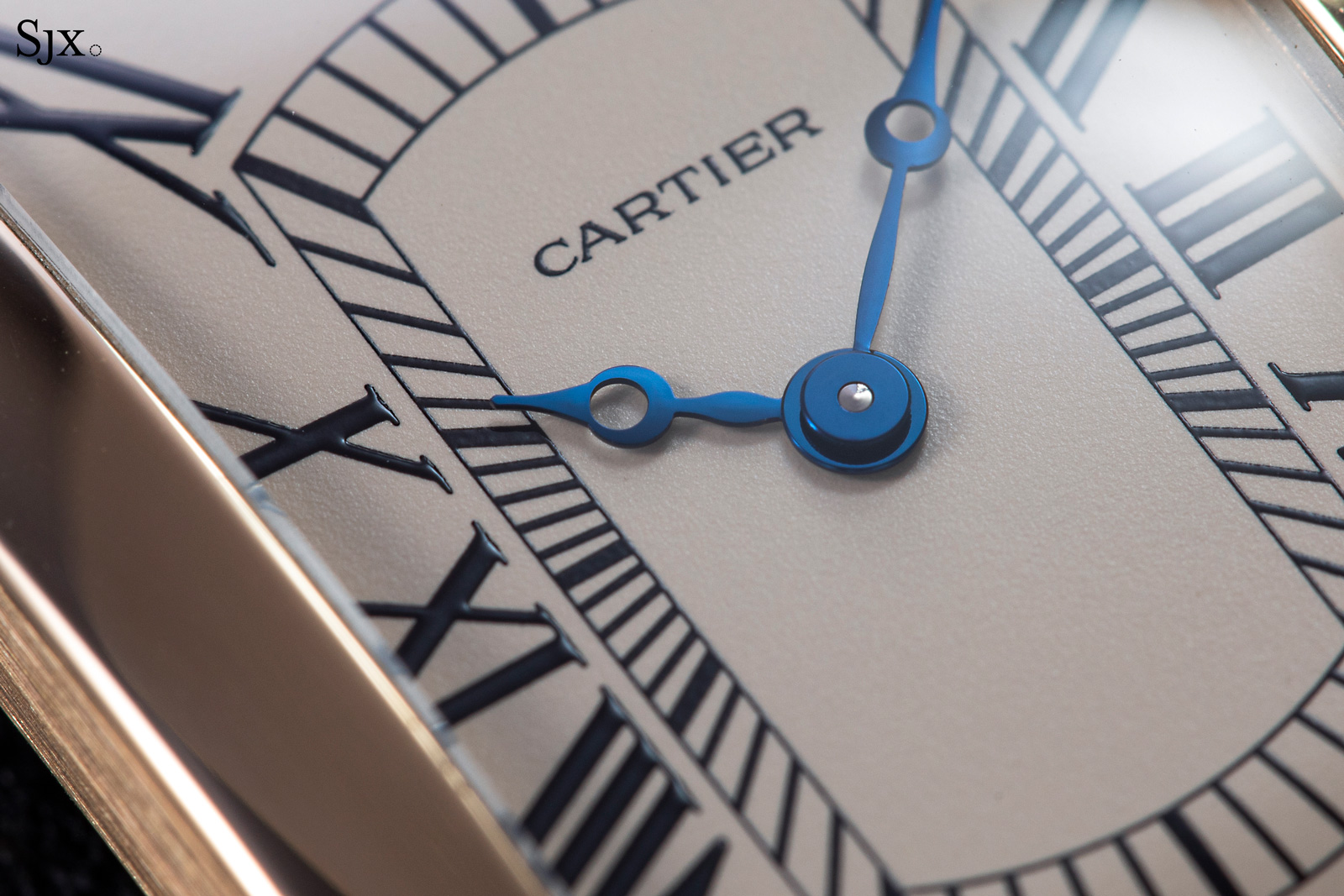 The anniversary edition, however, is expensive. It retails for 50% more than the 2018 Tank Cintrée, a different watch but nonetheless one that’s extremely similar. By comparison, the 2018 version seems like excellent value.

The most apparent explanation for the price hike is the movement – the anniversary edition is powered by a calibre by JLC that’s ultra-thin and presumably more costly than the ladies’ Reverso movement in the 2018 edition, which was also made by JLC.

Still, the price is hard to justify, especially given that such vintage-style Cartier watches are now popular, which makes it seem like a slightly opportunistic reaction to market trends. And that’s compounded by the fact that the watch is a 150-piece limited edition produced for the 100th anniversary of the model, a peculiar mismatch of numbers resulting in an extra 50 pieces are no doubt catered for the same.

The Tank Cintrée anniversary is almost identical in size to the 1921 original, every so slightly longer but also slimmer. The remake measures 46.3 mm by 23 mm and stands 6.4 mm high, while the vintage original was 44.7 mm by 23mm and 6.7 mm high.

Similarly, the dial is almost a spot-on reproduction of the original. Finished in a parchment colour with a grained surface, the dial captures the look of a vintage original after a century’s worth of patina. A 1920s Tank Cintrée fresh off the line probably had a brighter dial colour that darkened over time due to case being not sealed against moisture. The feel of the original is also captured in the details of the dial, including the wider minute track, the delicate serifs of the Roman numerals, and the form of the Breguet hands.

That said, the anniversary edition is clearly a modern watch. All with all vintage remakes, the watch looks shiny and new. And the same can be said for the details; the dial print is higher and glossier than on a vintage original. 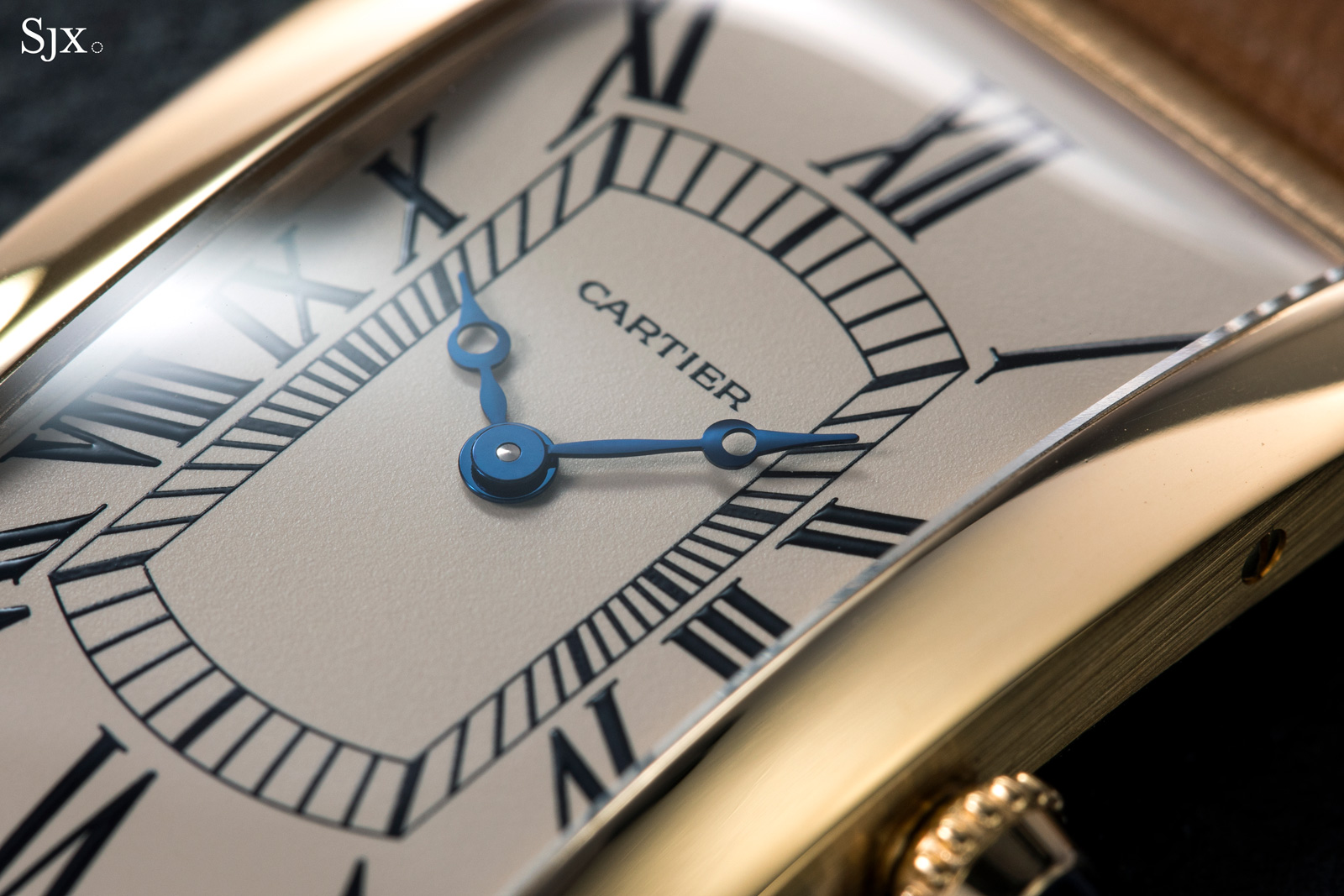 One detail that stands out is the crown, or more specifically its sapphire cabochon. It’s a little pointer than on earlier versions of the modern-day Tank Cintrée, evoking the vintage original better. Even though the anniversary edition is supposedly remake of the 1921 original, it is more accurately described as a reproduction of the 2005 original. The anniversary model is not actually a new watch, but instead it is essentially a new dial for the Tank Cintree ref. 2718, a limited edition in yellow gold launched in 2005 that had the same case and movement. Because of the ultra-thin movement, the anniversary edition manages to be extremely thin at just 6.4 mm high, which dictates a different construction compared to the 2018 model.

The anniversary edition (and the 2005 model) has a back that slides into the case middle, secured lateral screws on the case side. That results in a watch that is officially “not water resistant” according to its official specs. Neither water-resistance rating means much in practical terms since the Tank Cintree is not a sports watch in any iteration, but it does illustrate the compromises required to slim down a watch case.

Because the case of the anniversary edition is identical to that of the 2005 model, the movement is necessarily identical. It’s the 9780 MC, an calibre that is actually the JLC cal. 849, the ultra-thin calibre found in many JLC models over the years, including the Master Ultra-Thin Kingsman Knife watch. The movement is just 1.85 mm high, while also several decades old, explaining its short, 36-hour power reserve.

Although Cartier did not announce the maker of the 9780 MC publicly, the JLC connection has historical basis. The cal. 123 in the vintage Tank Cintrée was produced by LeCoultre, and then sold to the European Watch & Clock Co. (EWC), a joint venture between Cartier and Edmond Jaeger that produced the jeweller’s watches. LeCoultre was the primarily supplier to EWC during the period, and subsequently merged with Jaeger’s firm to form Jaeger-LeCoultre. The anniversary edition (left) and the 2018 model in platinum

The case of the 2018 version is obviously thicker when the two are compared side by side, although the difference is not apparent otherwise. In fact, the differences are slight enough that both watches feel identical on the wrist.

Also clear is the difference in case construction: the 2018 version has a snap-on back that can be removed with a tool inserted into the twin slots on the case back, while the back anniversary edition appears to slot in with lateral screws to hold it in place. This is likely the factor behind the difference water resistance of the two versions – the anniversary edition is “not water resistant” , while the 2018 version is rated to 30 m. Unquestionably appealing in style and form, the Cartier Tank Cintrée 100th Anniversary is a sharply-executed remake that ticks all the boxes as far as remakes go. But it is probably too expensive for what it is, although that will not be an obstacle to its commercial success given the faddish desirability of classic Cartier designs at the moment.