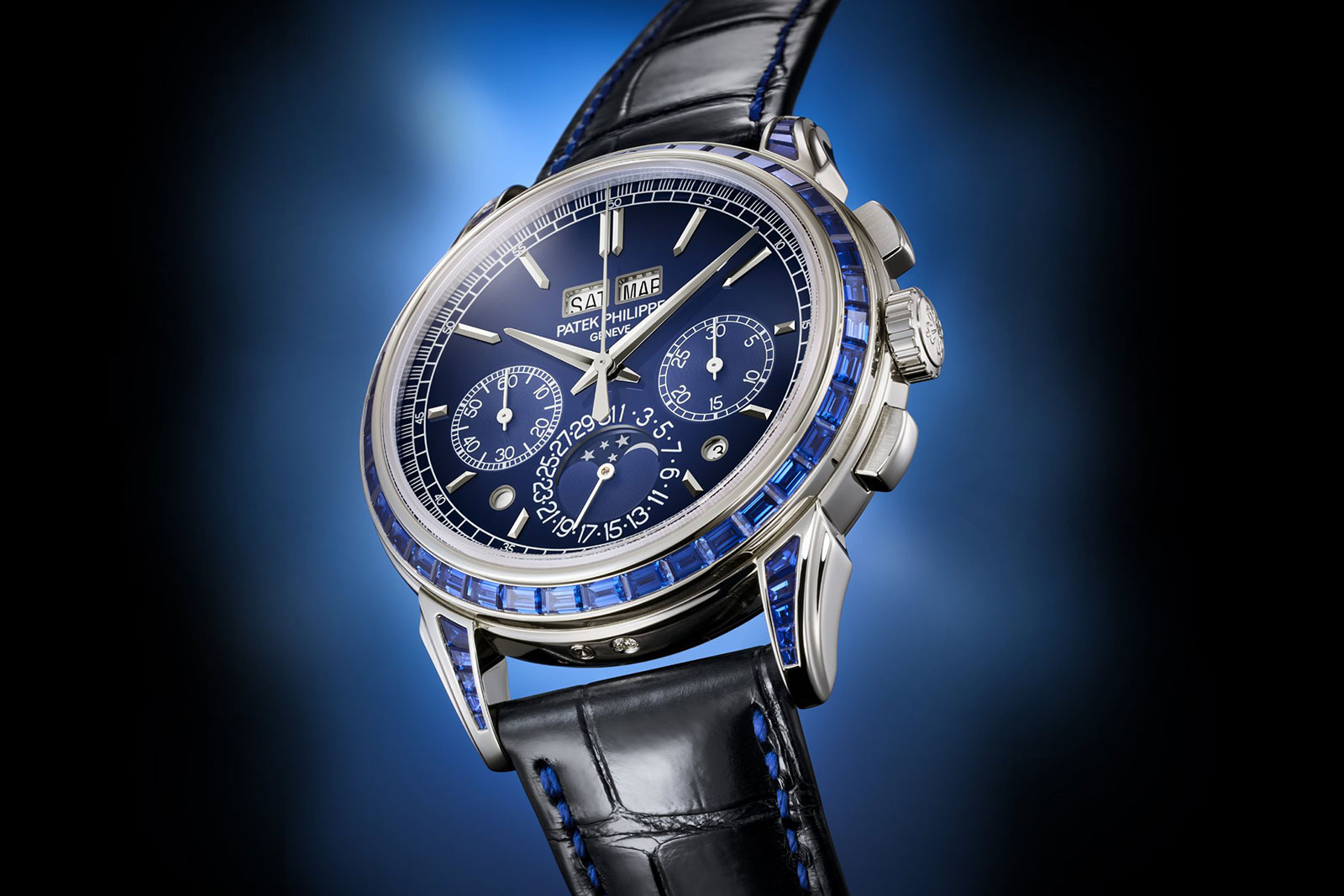 Patek Philippe has introduced two variants of its classic paired complication: the Perpetual Calendar Chronograph Ref. 5271/11P and Ref. 5271/12P are set with blue sapphires and rubies respectively, with each having a graduated finish dial in a matching colour. Both new references retain the look and feel of the ref. 5270 but certainly pack a punch with their flamboyant jewelled cases.

The first serially-produced gem-set variants of the reference in 11 years, the new pair joins the existing diamond-set ref. 5271P as the bling versions of Patek Philippe’s archetypal complication. Much of the excitement over new releases from Patek Philippe tend to be centred on its sports watches nowadays but that’s not all that the brand has been doing. At Watches & Wonders in March, the brand launched a new version of the longstanding ref. 5270 that featured a smoked green dial that was widely applauded (no doubt in part due to the current popularity of the colour). But the recent launches left me wondering, what else can Patek Philippe do to up its game beyond its mastery of complications? Well, now we have an answer.

In terms of the design, the new ref. 5271s retain the classic layout and distinctive feel of the perpetual calendar chronographs that the brand is known for, but with a few adjustments to the dial that give it a more contemporary feel. And then the coloured gemstones transform a watch that is ordinarily sedate into something over the top. 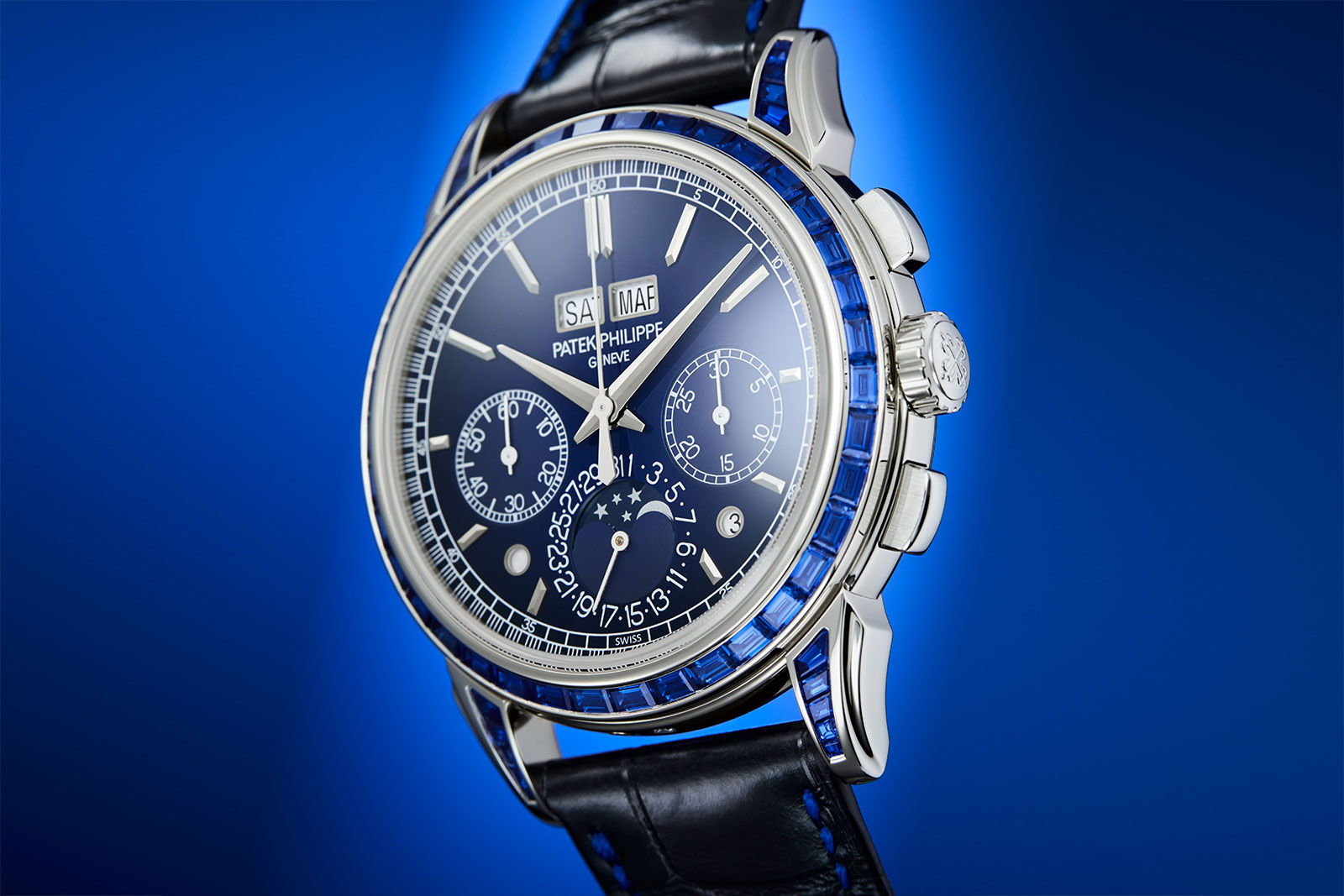 While gem-set watches are not new for Patek Philippe, the brand has arguably been one of the foremost proponents of making highly-complicated gem-set watches a mainstream thing, albeit at very steep price. With the two new launches, Patek Philippe is also making bejewelled complications more accessible, at least in a relative sense. No doubt they will be nearly impossible to buy, at least in the short term, but at least they are not special-order or one-off models as most of such watches were in the past.

More broadly, the two new models illustrate why Patek Philippe acquired a significant stake in the Swiss gem-setting specialist Salanitro in September of this year. Priced at US$348,930, the new ref. 5971 is over 60% more expensive than the standard model without gemstones that retails for US$211,720. Selling gem-set models of complicated watches is a sure way of upping the top line without increasing production. And neither will it alienate customers as gem-set complications grow in popularity and acceptance. Launched in 2011 as the first gem-set variant of the current generation of Perpetual Calendar Chronograph, the ref. 5271 gets a whole new look with lacquered gradient dials to match the sapphires or rubies on the case. 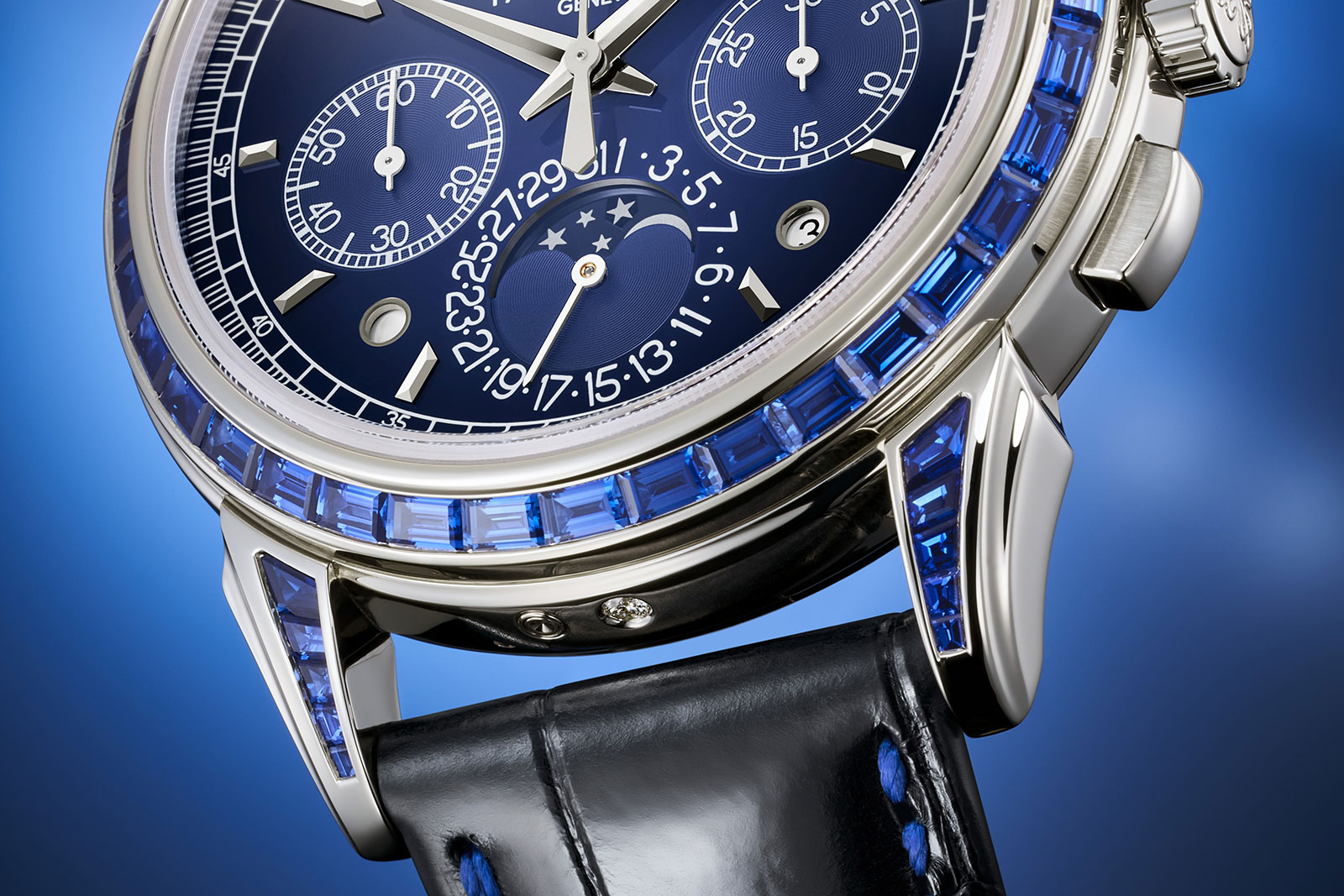 But the new models are not just about bling and colours. Both have a slightly more modern dial aesthetic thanks to a few modest tweaks. Unlike their predecessor ref. 5271P with diamonds, the new models do without the tachymeter scale and “chin” on the lower edge of the dial. Instead, they adopt the railway-style outer track that is substantially more pleasing to the eyes. And the new models also feature faceted dauphine-esque hands instead of more classical leaf hands. Both new versions of the ref. 5271 have the same 41 mm platinum case that’s set with 58 baguette-cut gemstones on both the bezel and the lugs, plus another 22 baguette-cut stones on the folding clasp, for a total of 4.11 carats across the entire watch. And they are naturally powered by the manually-wound CH 29‑535 PS Q, the brand’s first in-house chronograph movement. It features a traditional construction comprising a column wheel and horizontal clutch, while offering a power reserve of 65 hours. Availability: Now at Patek Philippe boutiques and retailers
Price: US$348,930 without taxes