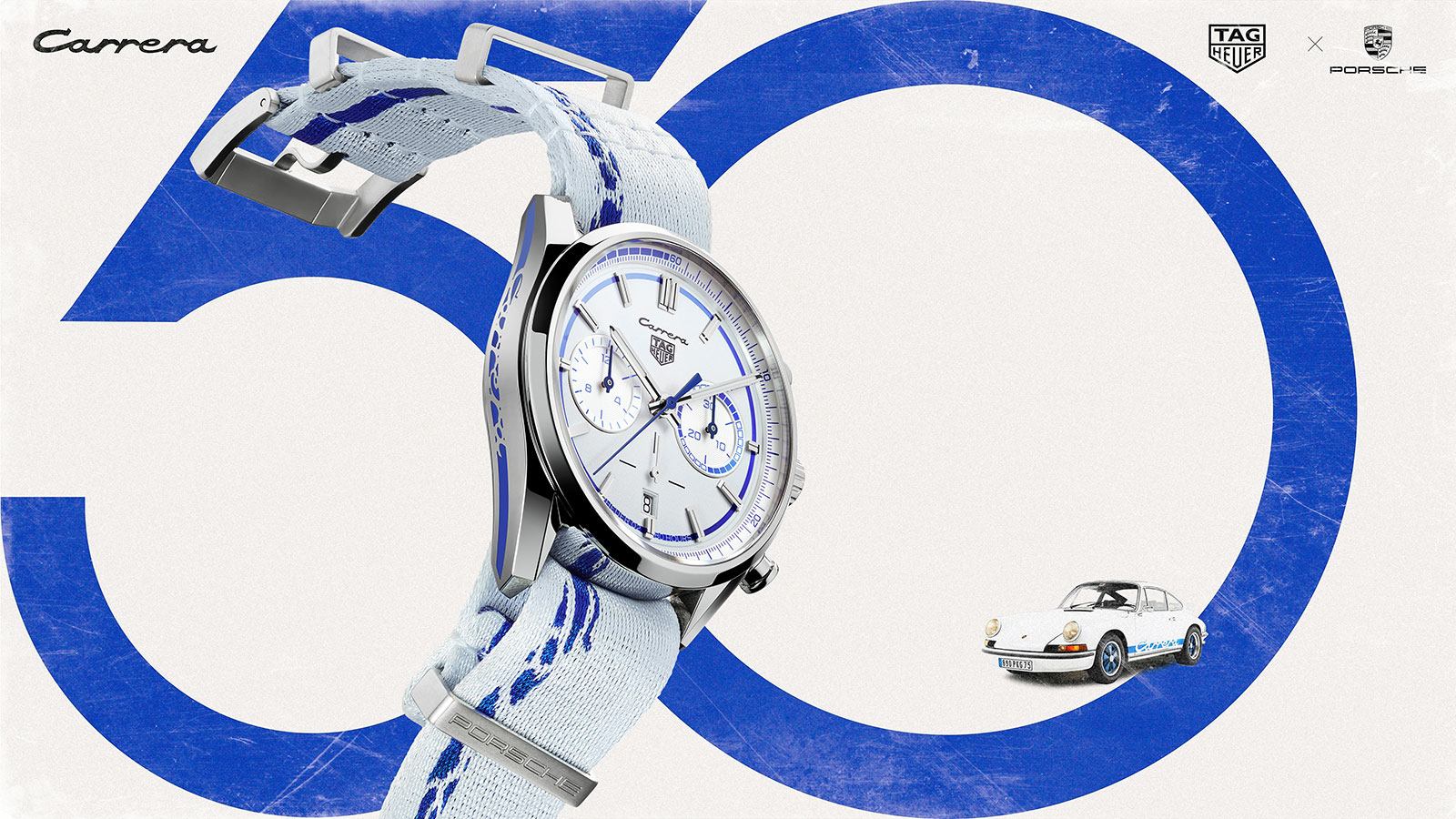 To mark the 50th anniversary of the iconic Porsche 911 Carrera RS 2.7, TAG Heuer unveils the limited-edition Carrera x Porsche 911 RS 2.7, continuing its partnership with the luxury carmaker that started last year. The pair of chronographs take clear inspiration from the iconic sports car and the dangerous rally race that inspired Jack Heuer and Ferry Porsche.

The narrow bezel and angular lugs are unmistakably Heuer Carrera, but it’s not a remake. Instead of recreating a vintage model from its archives, Heuer conceptualised a new iteration of the classic for contemporary tastes, while still giving it obvious retro details like the “Carrera” engraving on the case side.

Though the dial has more striking elements than the standard Carrera chronograph, the RS 2.7 feels cleaner and more purposeful. The coloured ring linking the hour markers is a nice touch, as is the countdown scale on the outer seconds scale.

But because it is based on the standard Carrera chronograph, it has the same dimensions, which means it’s a fairly large watch and also thick at almost 14.5 mm high. While not oversized by modern standards, the case lacks the compact feel of the vintage original. Still, with the retro elements and classic design, the new Carrera chronograph feels like a winner. 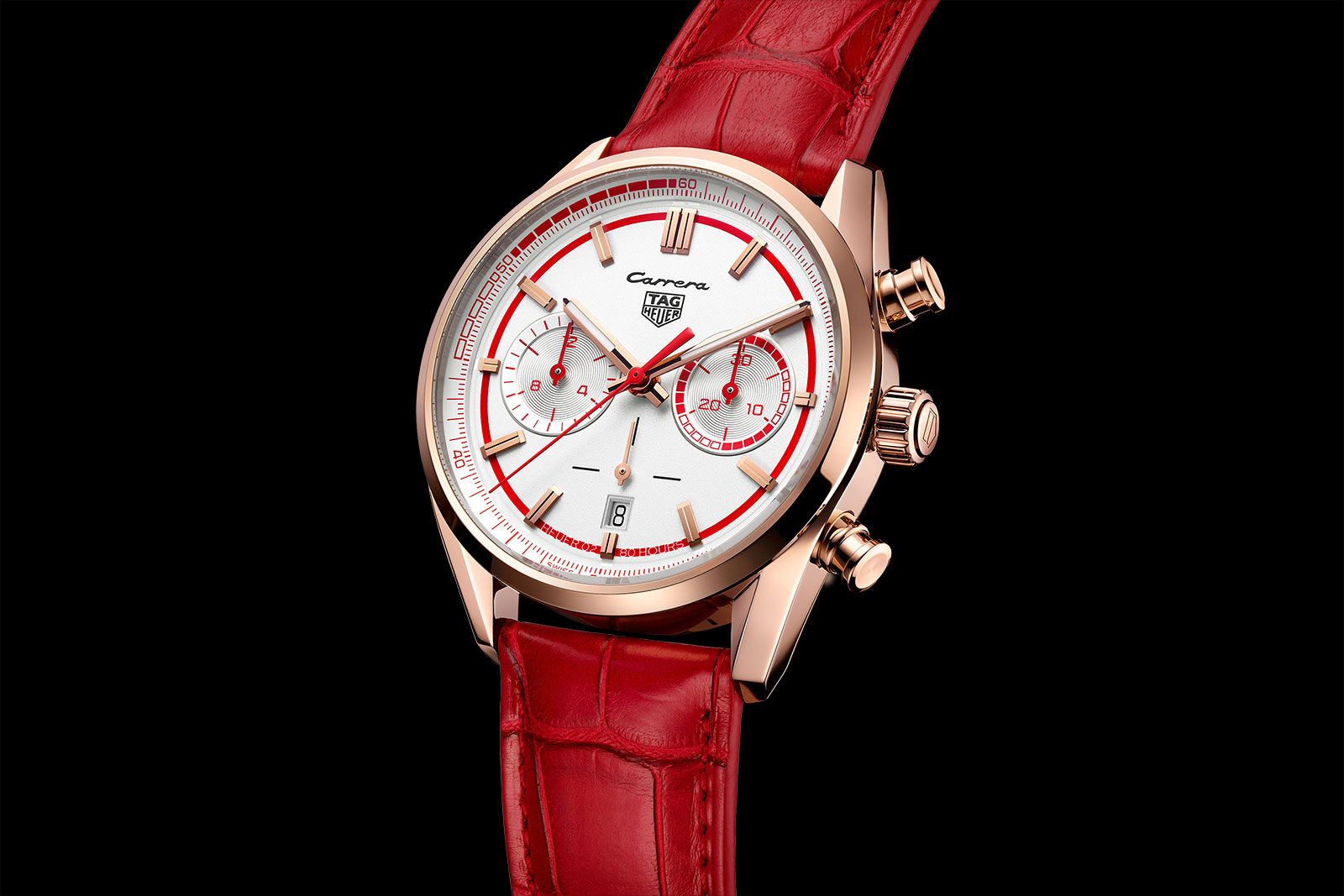 In his 2013 memoir The Times of My Life, Jack Heuer, great-grandson of Heuer’s founder Edouard, recalled how he was fascinated by Carrera Panamericana, the road rally across Mexico that became notorious for the rugged terrain that led to multiple casualties, including his friends, drivers Pedro and Ricardo Rodríguez.

“I loved not only its sexy sound but also its multiple meanings, which include road, race, course, and career. All very much Heuer territory!”, wrote Mr Heuer, “So as soon as I got back to Switzerland, I rushed to register the name under ‘Heuer Carrera’… I decided the next product I would create would be called the ‘Carrera’.”

That same year, 1963, Ferry Porsche designed perhaps the most famous sports car in history: the 911. On October 5, 1972, Porsche unveiled a fully redesigned Carrera known as the RS 2.7 at the Paris Motor Show, one made for performance on both road and track. And exactly 50 years later, TAG Heuer is presenting the new Carrera chronographs in a tribute to the RS 2.7. 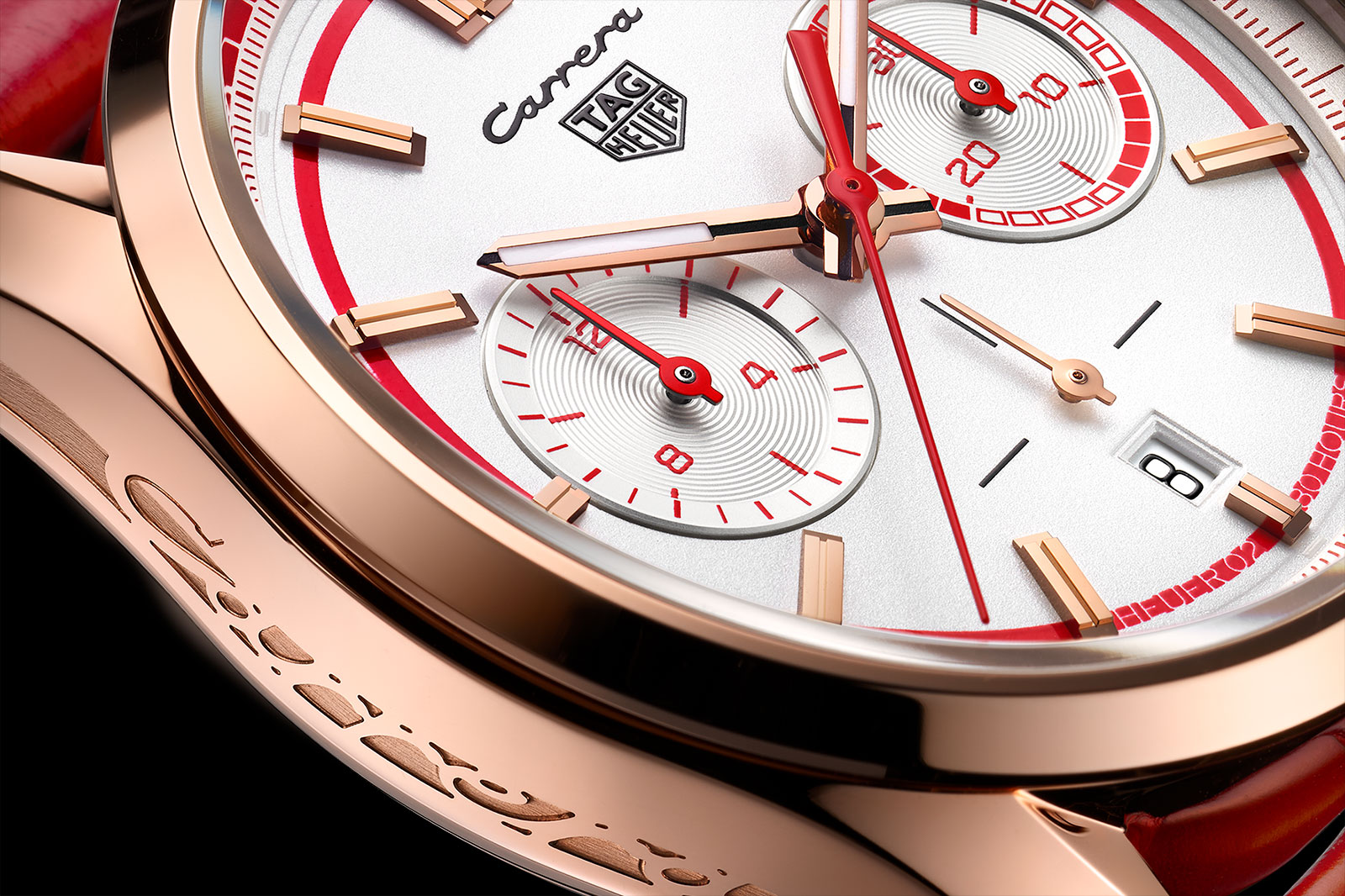 The Carrera RS 2.7 chronographs veer away from the typical sports watch by adopting a more dynamic palette: navy blue on the steel model and “Guards Red” on the rose gold variant. These colours were selected to best reproduce the colourways of two versions of the Carrera RS 2.7, which was available in vivid 27 colours typical of the 1970s.

The design also integrates the emblematic Porsche Carrera typeface on the dial and engraved, lacquered case flank. Rated to 100 m, the 42 mm case has the classic Carrera silhouette with angular lugs and “pump” pushers. 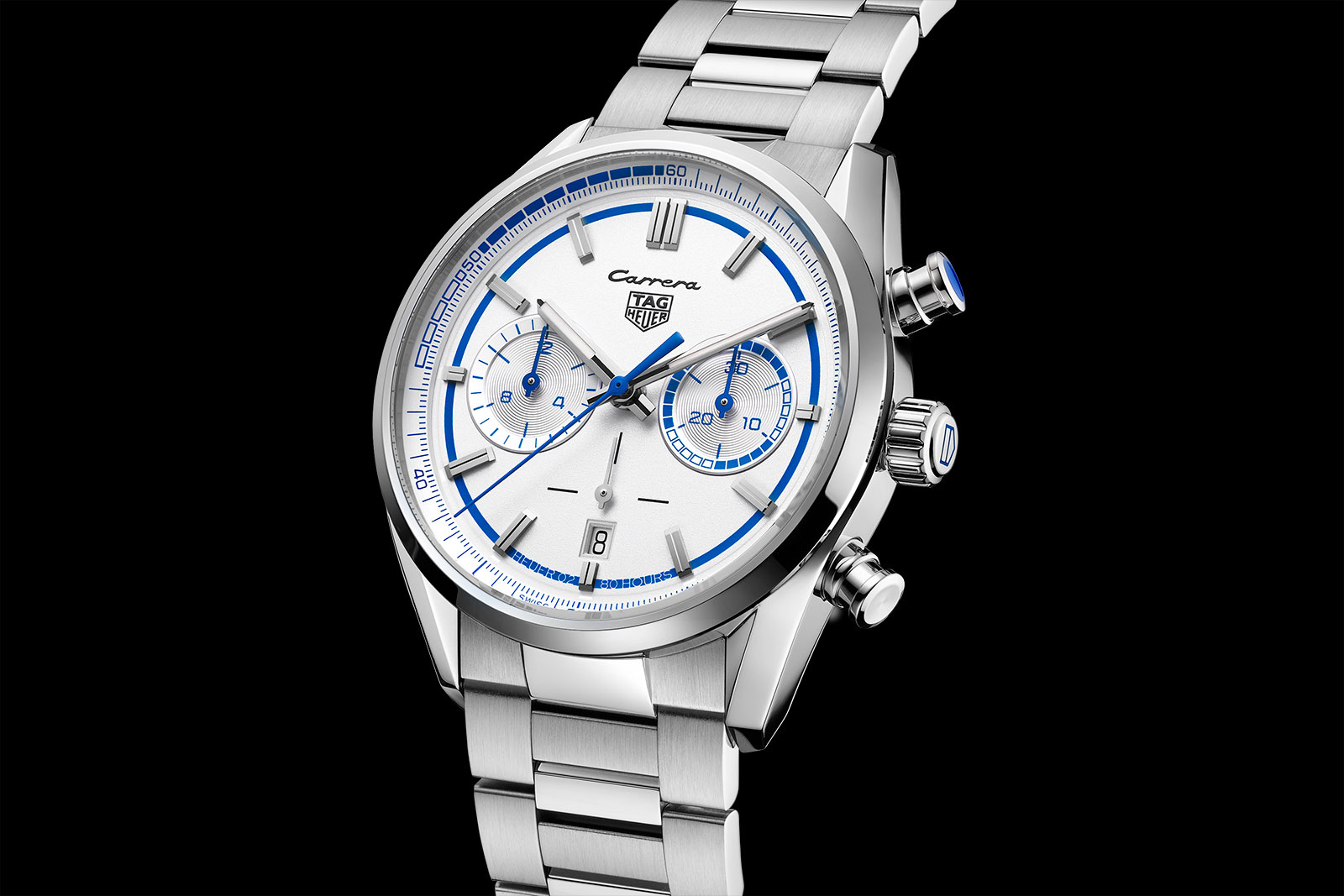 On the steel model, the engraving on the case side has been filled with a blue lacquer with a glossy finish much like the paintwork of a car. Its more luxurious counterpart in rose gold has a toned-down look with a tone-on-tone engraving. 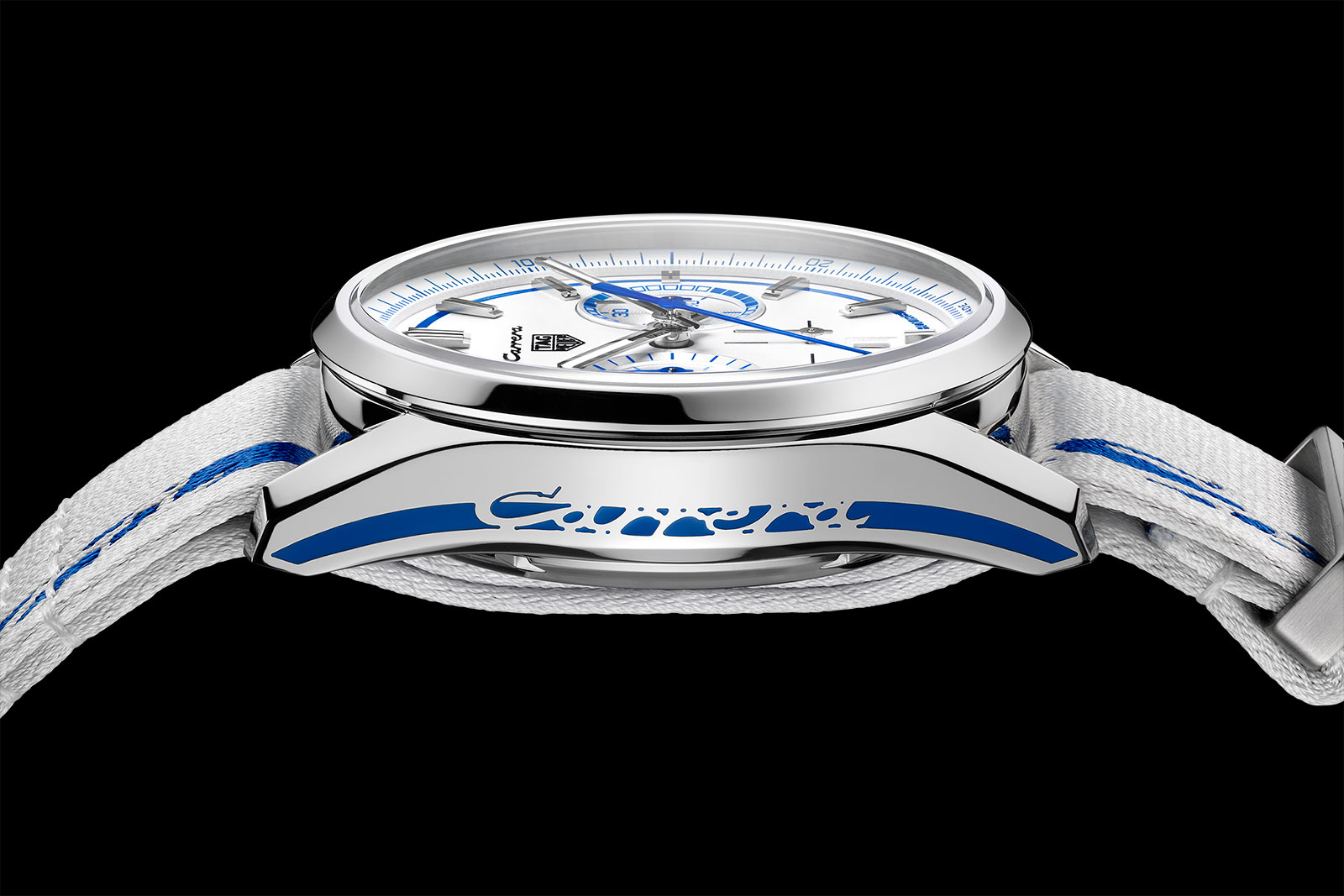 Both watches are powered by the TAG Heuer Calibre Heuer 02 Automatic, its proprietary chronograph movement that has a column-wheel, vertical clutch, and an 80-hour power reserve. 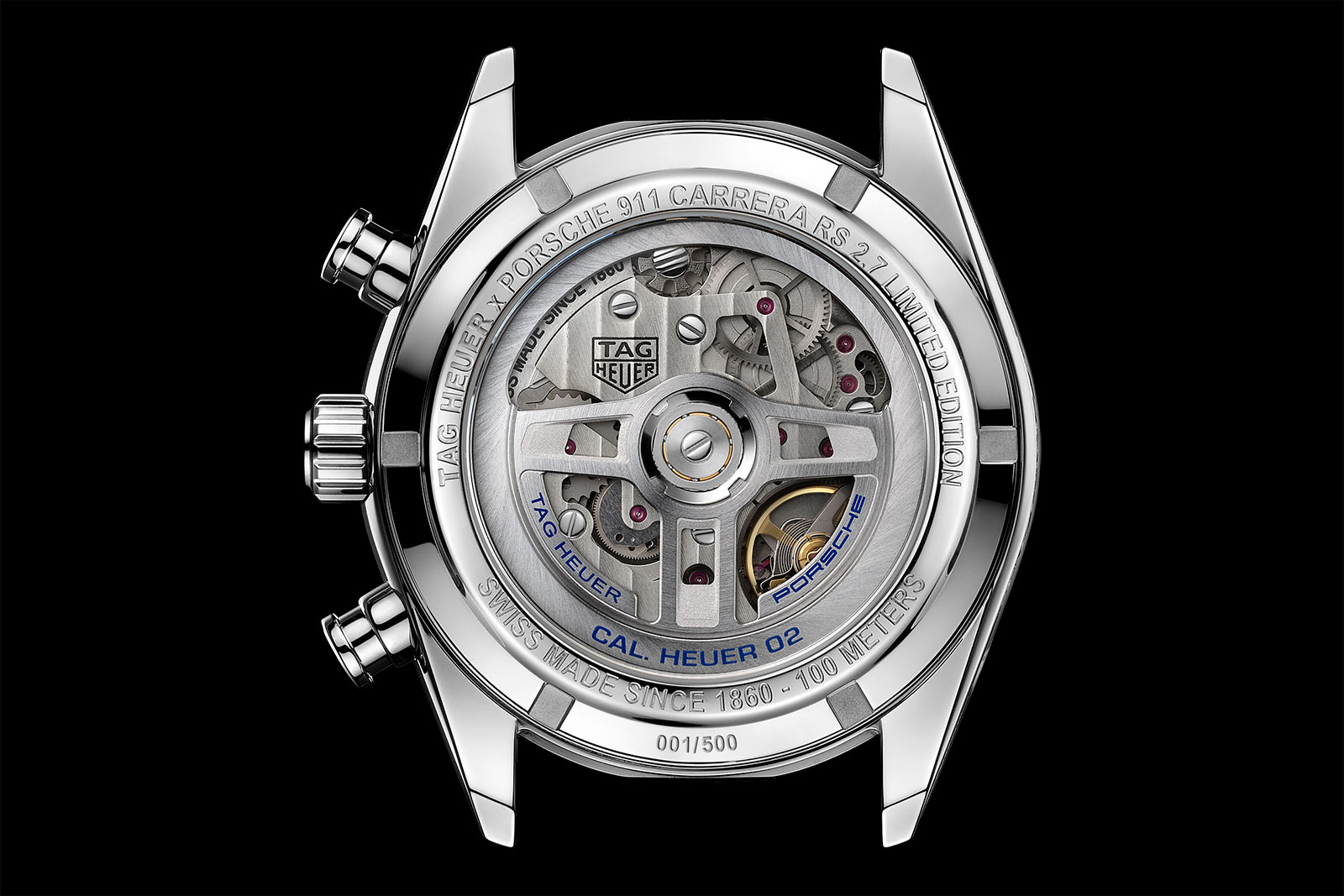 Limited edition: 200 pieces in red gold and 500 pieces in steel
Availability: Now at TAG Heuer boutiques and retailers
Price: US$7,400 for stainless steel, US$ 23,500 for rose gold