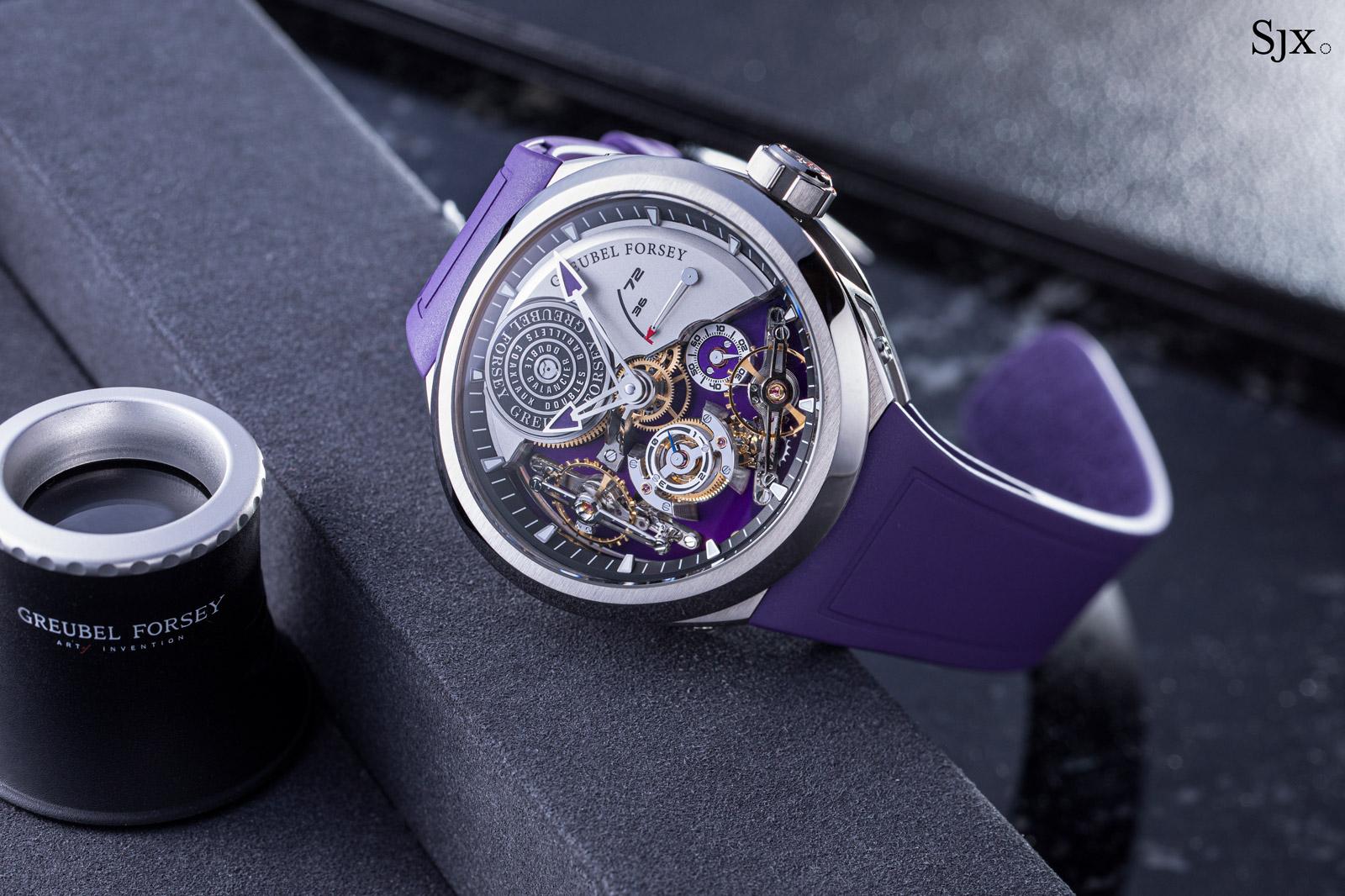 A watch with twin balance wheels linked by a differential, the SHH edition is housed in the streamlined “Convexe” case that defines the Greubel Forsey’s sports watches. But unlike the brand’s sports watches to date, this is striking in an ultra-contemporary purple livery that’s uncommon for such a complicated watch. 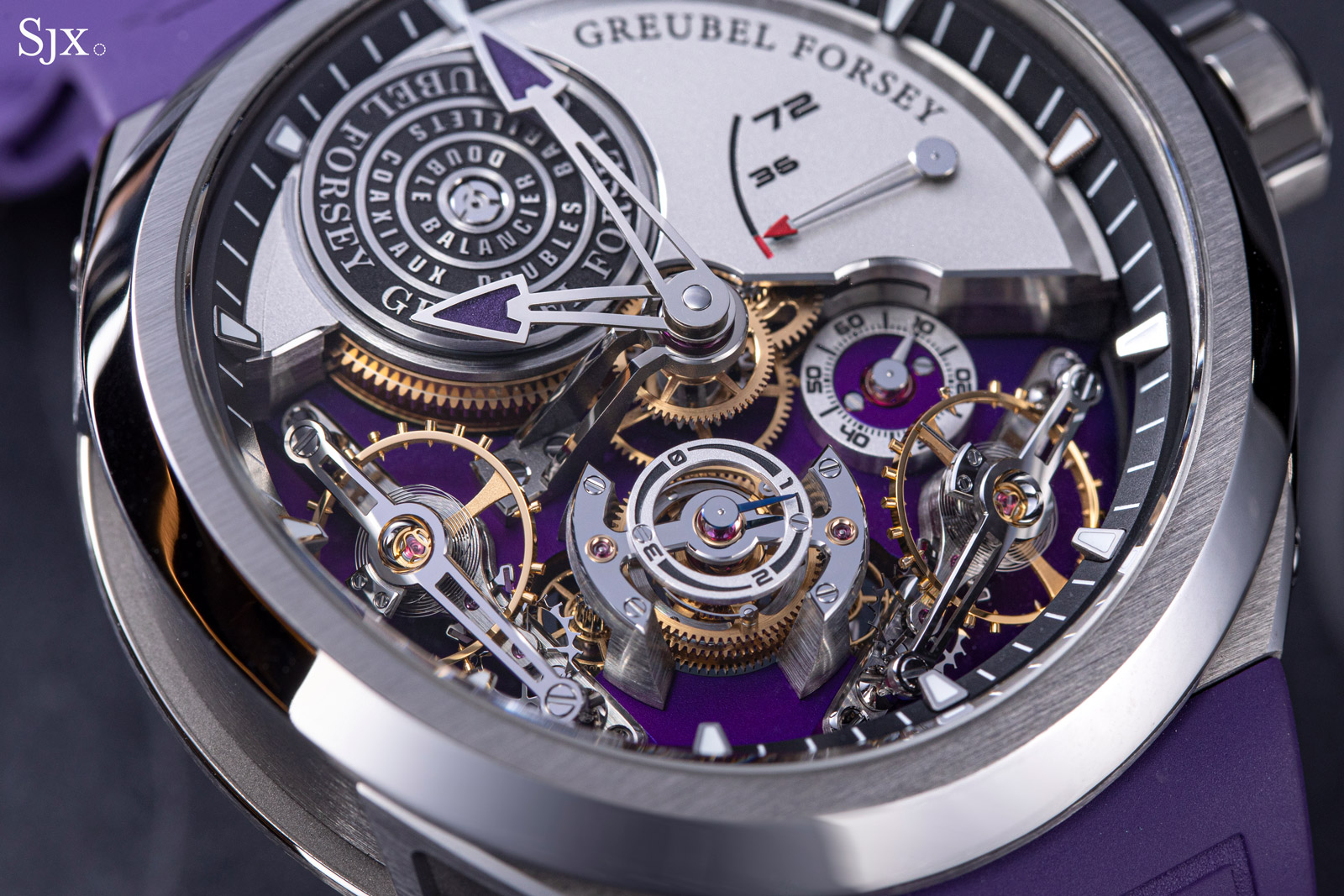 The rationale behind the juxtaposition of bold colours and refined complications is straightforward according to Sincere chief executive Ong Ban. “For the new generation, watches go with their dress and the younger ones want… [watches] that go with sneakers or hoodies,” explains Mr Ong, “But while the cosmetics evolve over the years, but the essence of finely executed movements remains the same.” 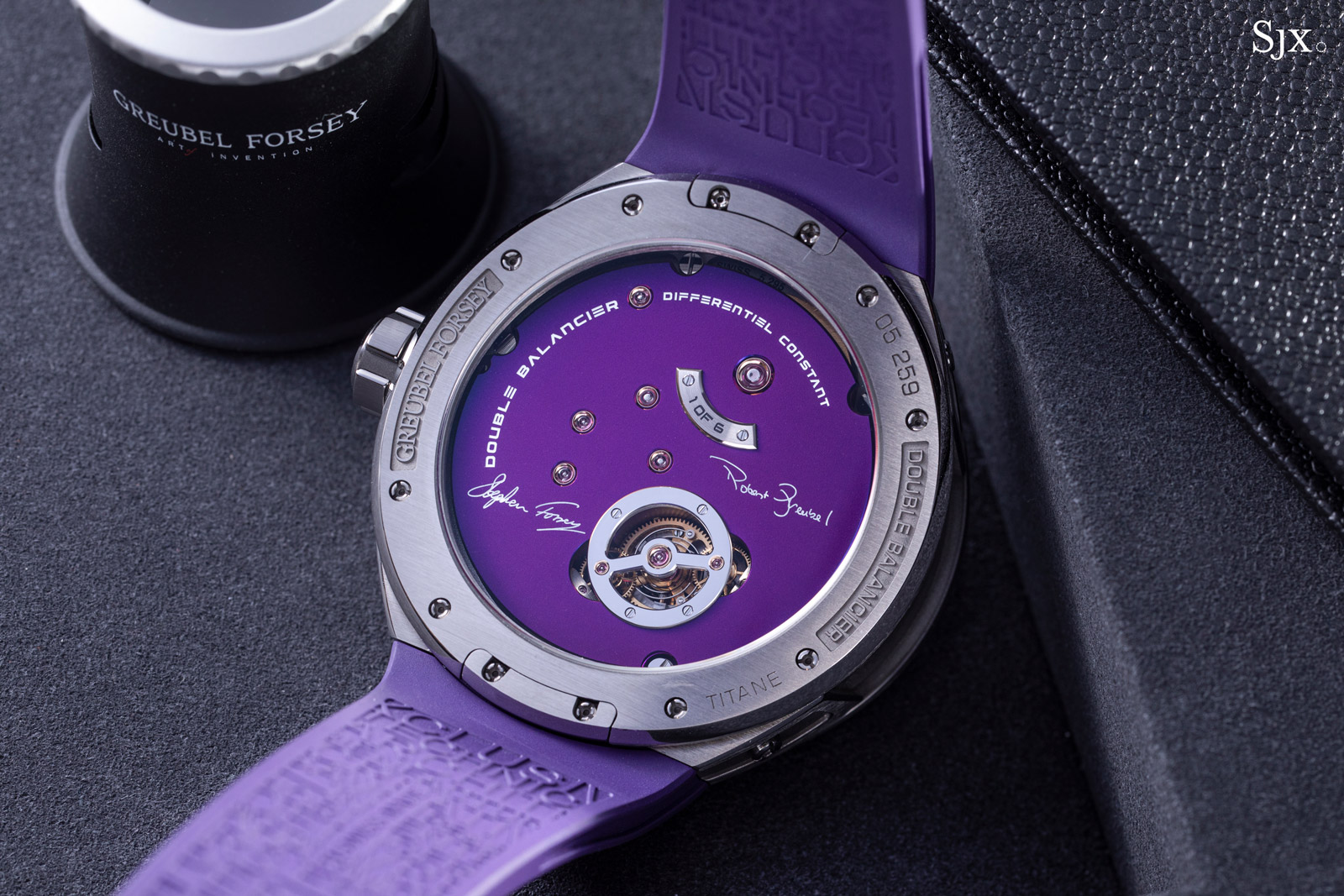 The new Double Balancier is a haute horlogerie sports watch in an eye-catching colour and the requisite integrated strap that will no doubt draw a new audience to the brand.

While Greubel Forsey (GF) watches are often avant-garde even in their most classical round form, few have been dressed in colours as striking as this, although that has started to change with the brand’s ever-growing lineup of sports watches. Even though GF has already debuted several sports models with lively aesthetics, the SHH Edition is certainly the most striking to date.

The choice of purple is a smart one, because the colour stands out – even from far, far away – but is uncommon in high-end watches, which means the SHH Edition avoids being yet another watch in green or “Tiffany” blue. That said, this might be the start of a trend. The colour has begun to catch on with fellow independent brands, with Urwerk having just rolled out its purple UR-100V a few weeks ago. But the vivid nature of the colour means it can be a hit-or-miss. Purple can be the regal colour of Roman emperors or lurid shade of Joker in Batman. Fortunately, the SHH Edition is done just right. It’s has enough purple but not too much. And if the purple strap is a bit much for some, the watch is delivered with two additional straps, one of which is a muted black that dials back the look.

Strap aside, the purple elements on the watch itself are mostly on the titanium main plate below the dial. The highly mechanical aesthetic of GF remains as expected, so traditionally minded collectors will no doubt appreciate the mechanics and decoration that are visible up close. 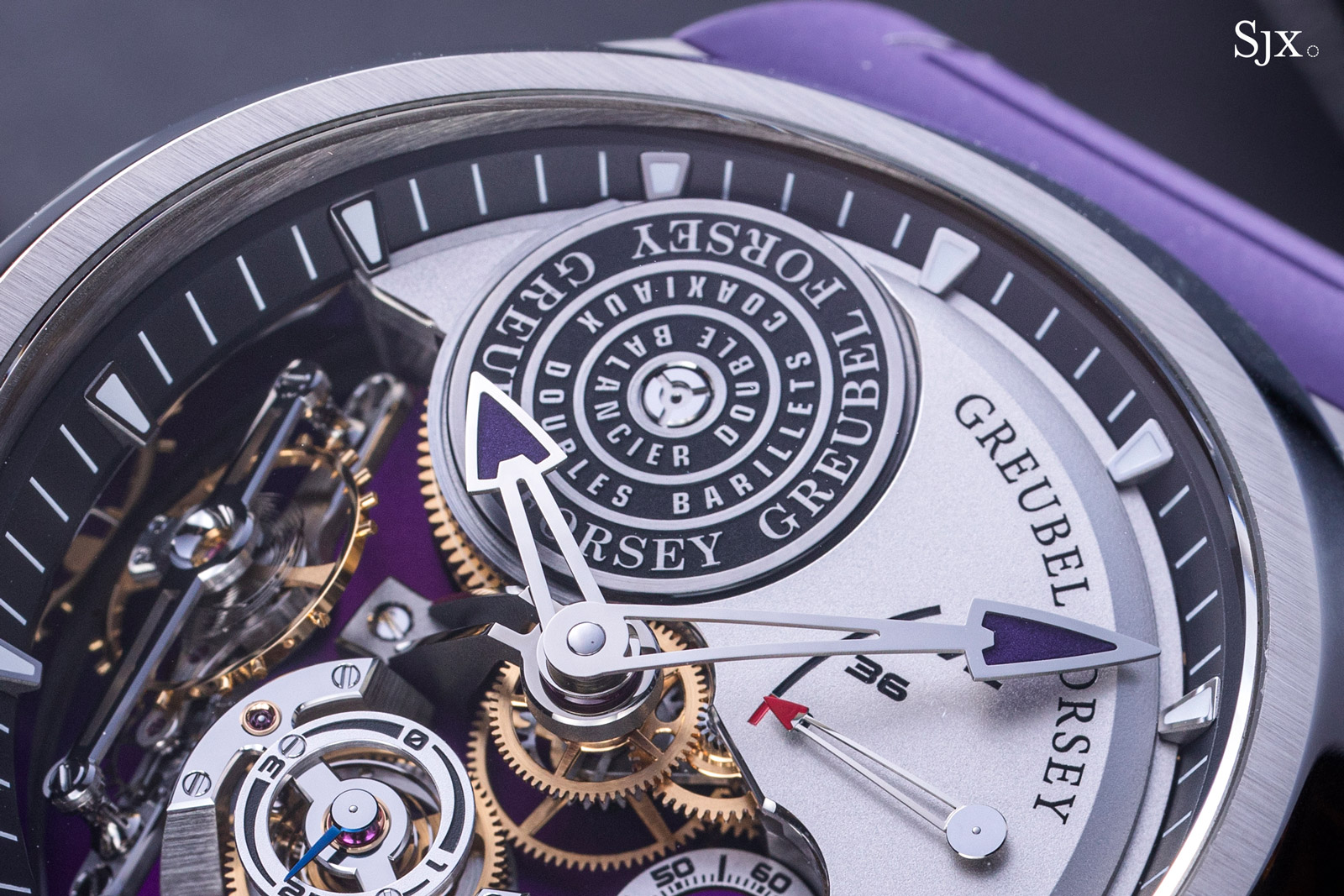 A new case design that made its debut three years ago with the GMT Sport, the ovoid case has since evolved into a full-blown range of sports watches dubbed “Collection Convexe”, reflecting the popularity of the integrated-bracelet-sports-watch genre.

And although the watch is delivered with a trio of rubber straps, the SHH Edition is also available with an optional titanium bracelet that flows seamlessly into the case. Sturdily constructed and finished well, the bracelet is a no-expense spared option that costs almost US$50,000. 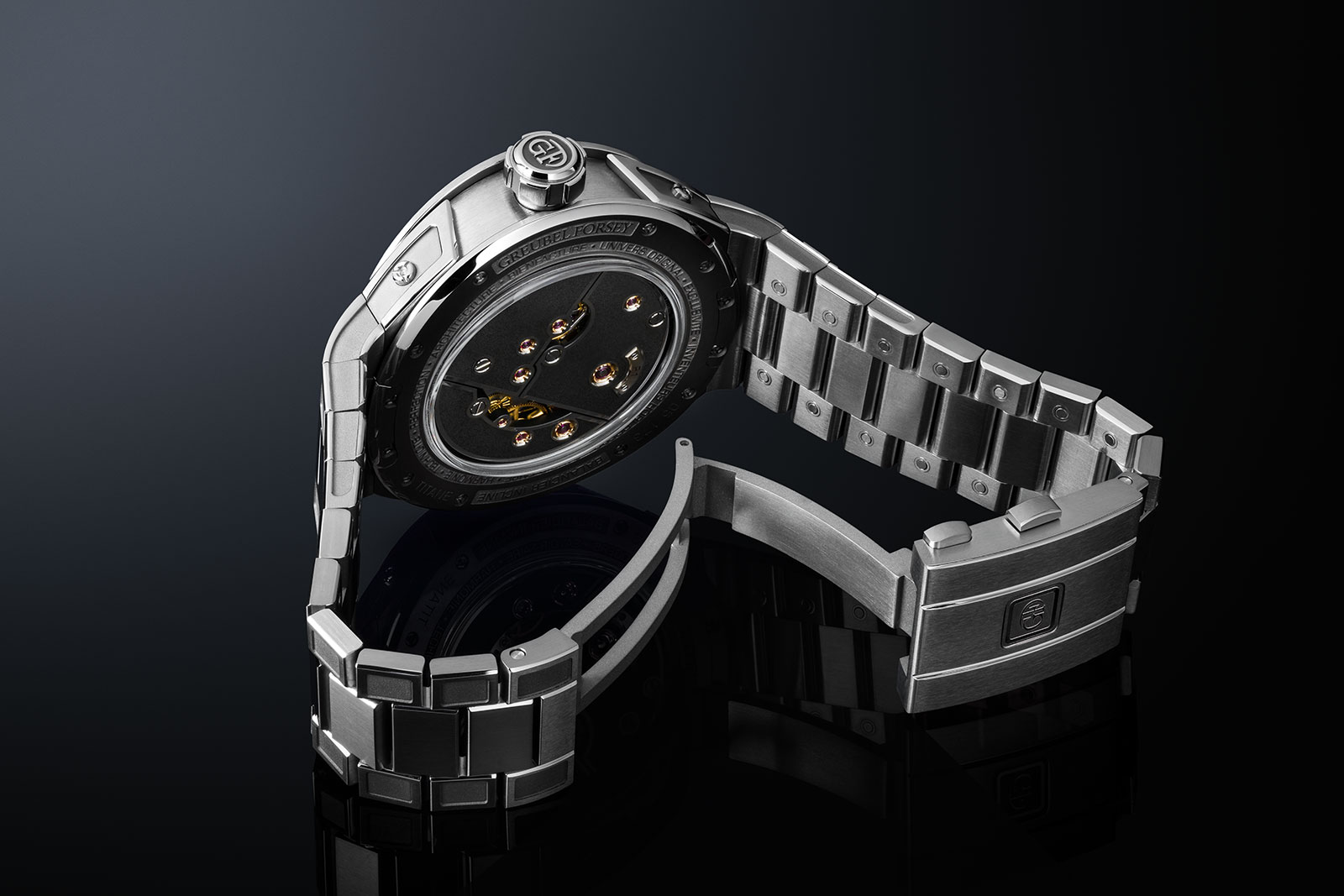 An example of the Convexe fitted to the titanium bracelet. Image – Greubel Forsey

Three dimensional as is typical for a GF case, the Convexe is also just as large as the typical GF case, but it is set apart by a streamlined profile that does away with the bulges that were historically synonymous with the brand’s designs. Add to that the short, downward sloping lugs and the result is a case that wears smaller that its dimensions suggest. It’s still a big watch but doesn’t feel that big.

Going by anecdotal evidence from owners, the form is one reason the Convexe case sells itself – it accommodates an extra-large, architectural movement while being eminently wearable. Similarly, such ergonomics are a key reason behind Richard Mille’s success.

On the topic of comparable watches from the likes of Richard Mille, the SHH Edition fits neatly in that segment – where bold colours are the norm – with its purple hue. That said, despite some similarities, GF distinguishes itself from the competition since it is resolutely focused on complications and high-end decoration. 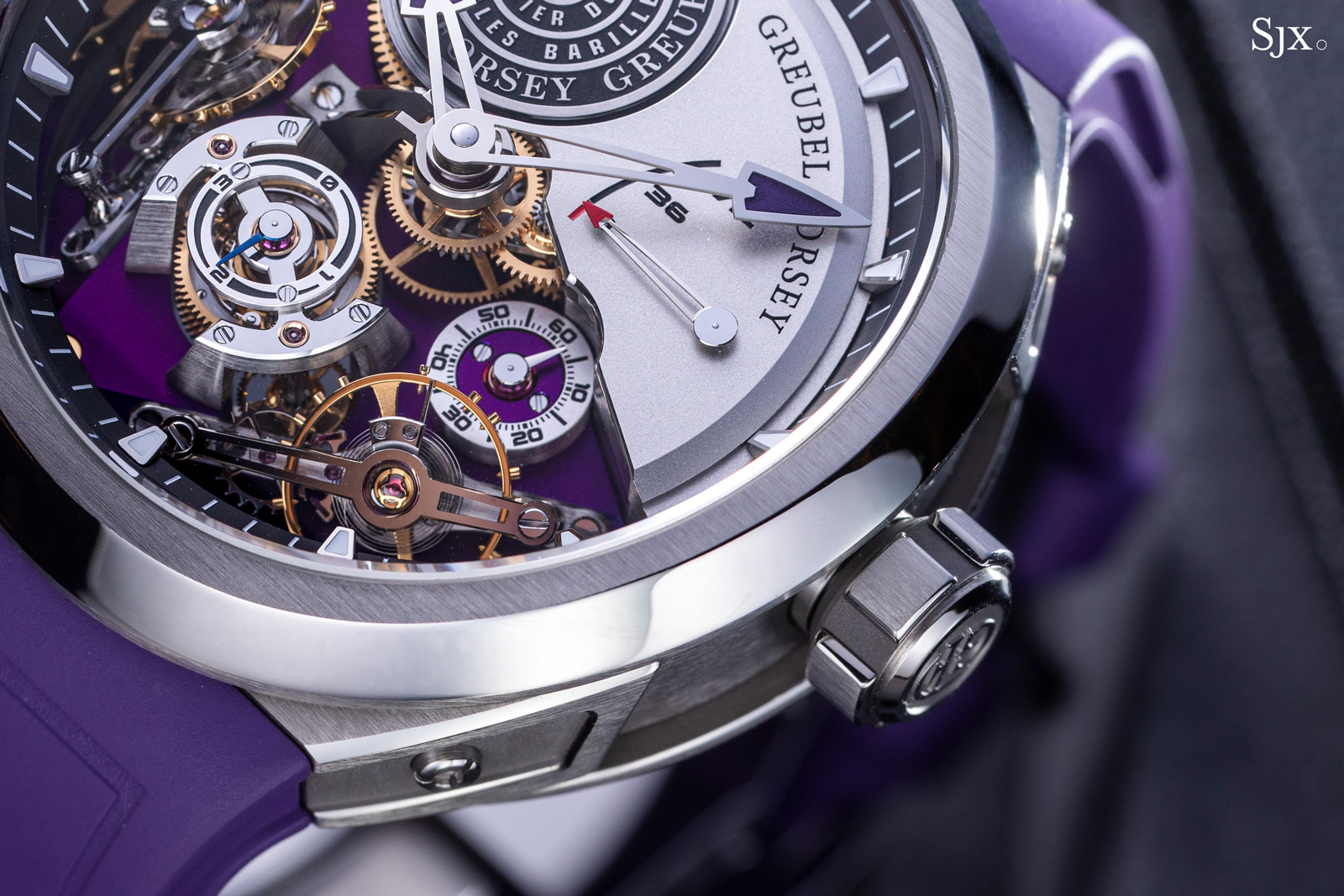 With its a partially open-worked front, the movement of the SHH Edition offers much mechanical detail to admire, from the three-dimensional architecture to the exquisite finishing, all set against a purple backdrop.

Naturally, the most interesting element is the regulating organ, or more specifically, the regulating organs – twin inclined balance wheels, each secured by a long, mirrored-polished bridge in steel. Both are conventional oscillators, as opposed to tourbillons, but they work to enhance timekeeping thanks to their inclined positions and the imposing differential that connects them. 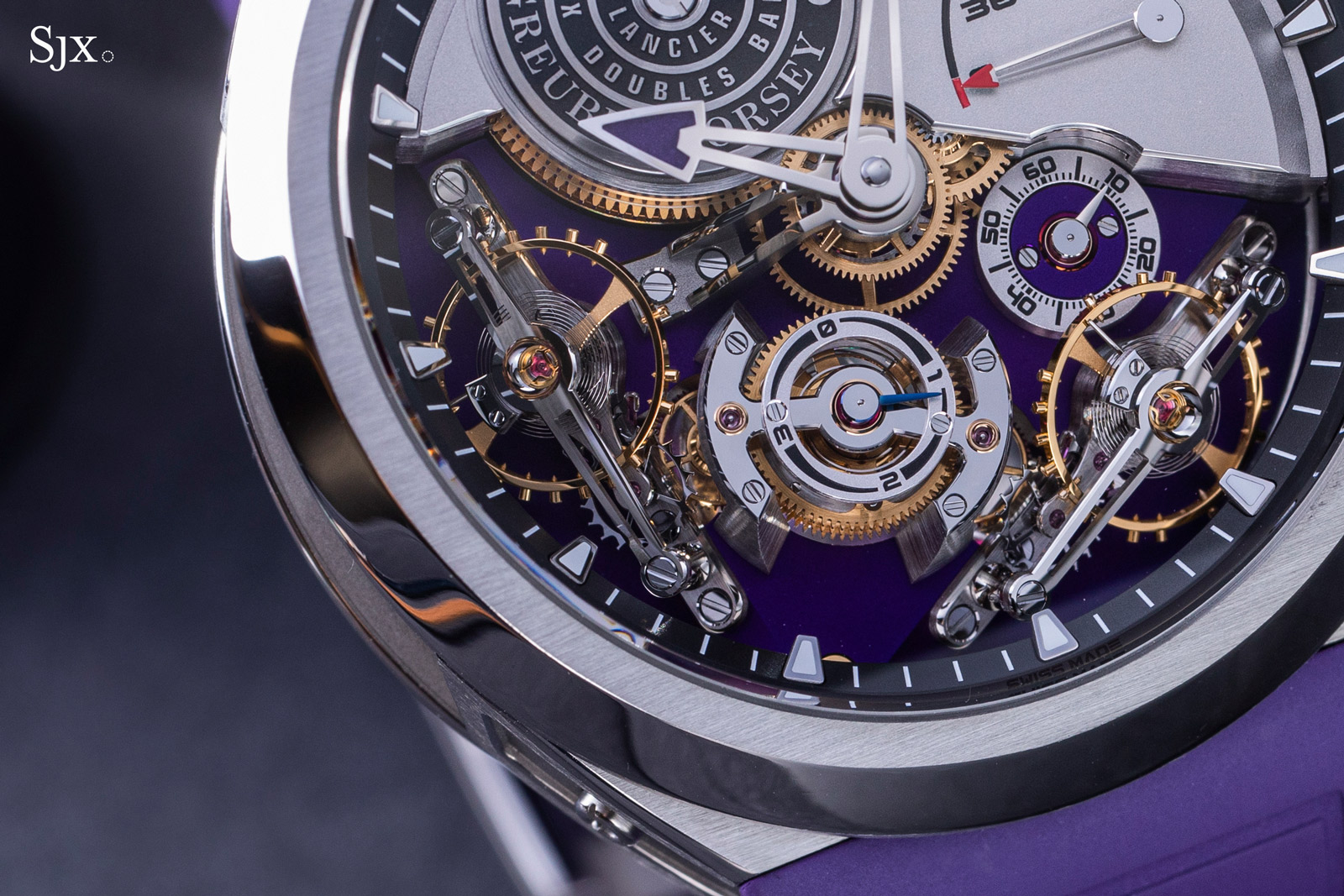 There is a tiny seconds indicator just above the rightmost balance, a feature that allows the movement to illustrate its chronometric ability

The complication was first launched by Greubel Forsey almost a decade ago in a far more classical format, and subsequently iterated into several versions, including one with a case in clear sapphire crystal. But 2022 is the year that the Double Balancier movement made its debut in the Convexe sports watch case.

As the name implies, the Double Balancier is all about the two balances that each sit inclined at 30° off the horizontal in opposite directions, such that they are always in different relative positions. As a result, they will beat with differing and opposing positional errors. The differential receives the individual rates of each balance and then outputs the mean of the two as the time display, a process that averages out the errors between the two balance wheels. 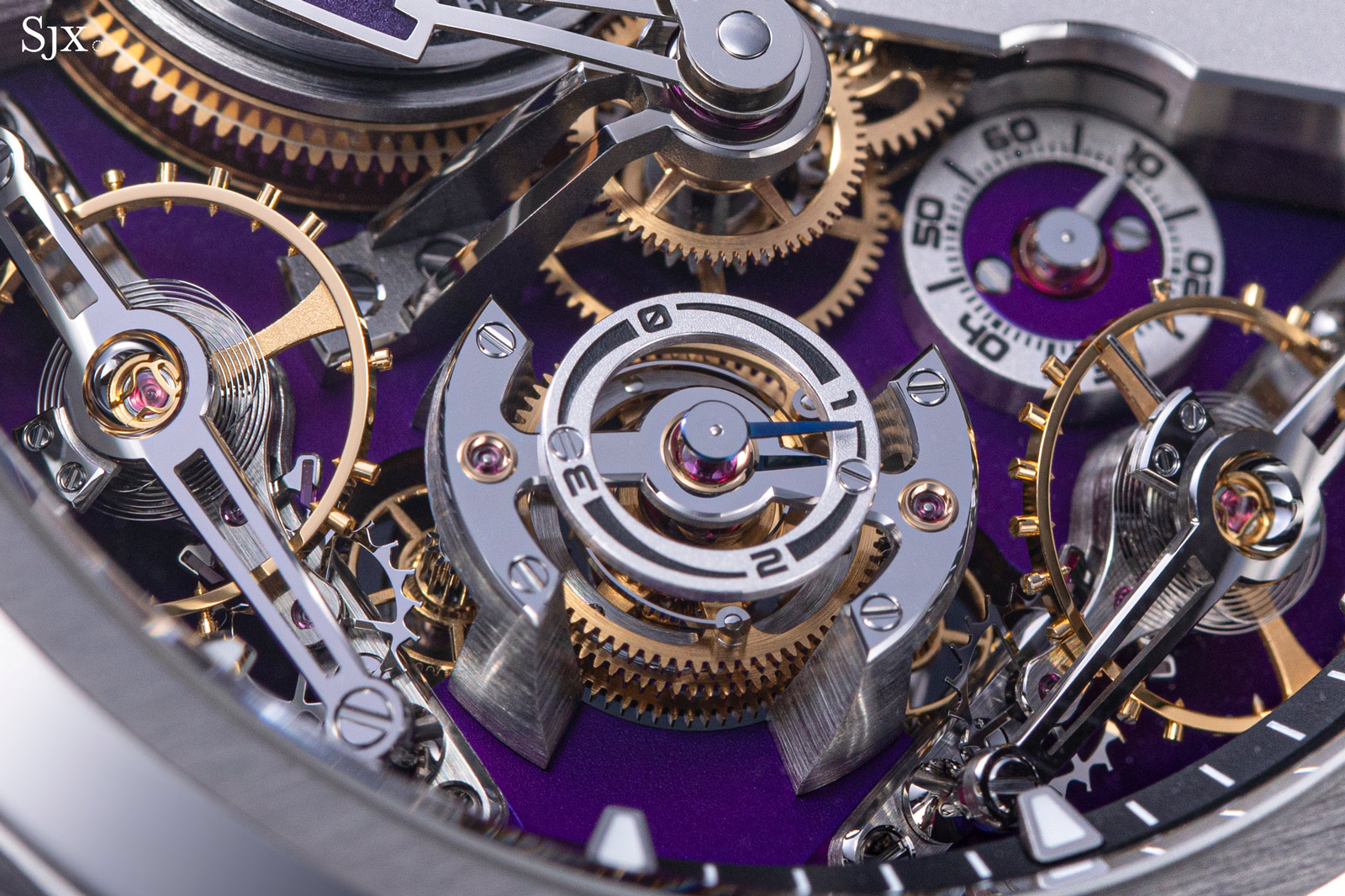 Purple, silver, and gold is a surprisingly good combination

While no doubt technically impressive due to the balances and differential in full view, the movement also does well in other aspects that are not immediately obvious. One notable feature is the unusual construction with the moving parts built upwards towards the crystal, which leaves only the interesting elements completed exposed while keeping the dial as clean as possible.

This is done by having the differential and balances sitting on the dial while the gear train is hidden beneath, an approach that is made even more obvious with the titanium base plate in high-contrast purple. The colour contrast between the base plate and its components allows the movement finishing stand out, especially the mirror-polished bevelling for the various steel parts like the bridges for the hands and differential.

It goes without saying that the rest of the movement is finished to a similarly high standard. As is habitual for GF, the steel parts are finished with black polishing, while the larger bridges are frosted and the wheels, circular grained.

The only detail that feels out of place on the front is the purple luminous paint inside the tips of the hour and minute hand. While it reproduces the colour of the dial quite, it looks mismatched against the white Super-Luminova in the hour markers. 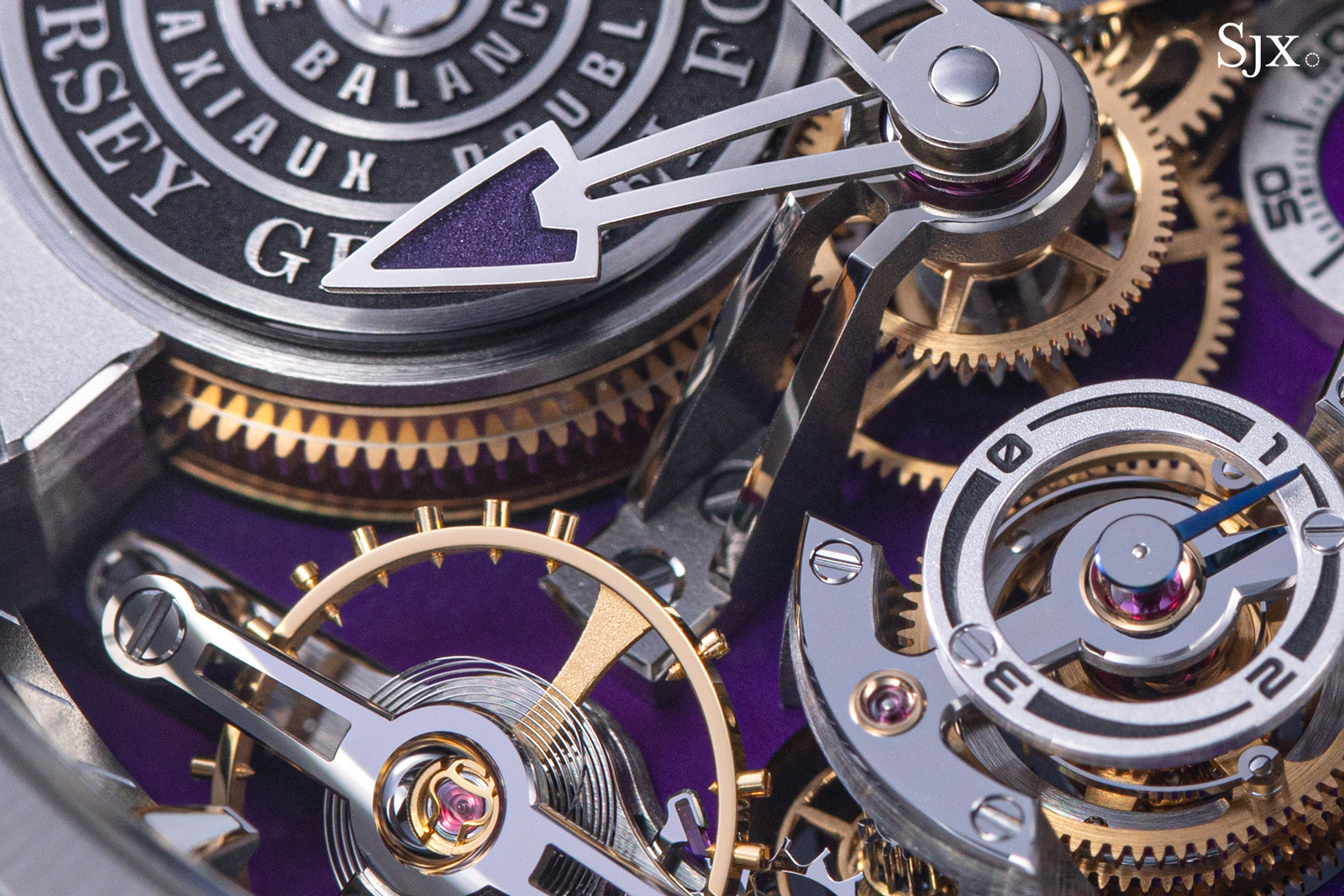 The tall bridge around the canon pinion is attractively frosted and accompanied by wide mirrored bevel. Even the screw slots are bevelled on the inside.

Because of the upwards construction on the front, the back of the movement is necessarily plainer. It’s essentially a single, large plate with only a single opening – ringed by a beautifully black-polished bridge – that reveals the lower pivot of the differential.

But while the single plate might be plain, it is definitely not dull. Like the plate in the standard version of the watch, it is titanium with a frosted finished, but here it’s been heat treated to create a vidid purple finish. The striking colour means the frosted surface is less apparent, but the effect is electric and certainly unexpected for a haute horlogerie movement. 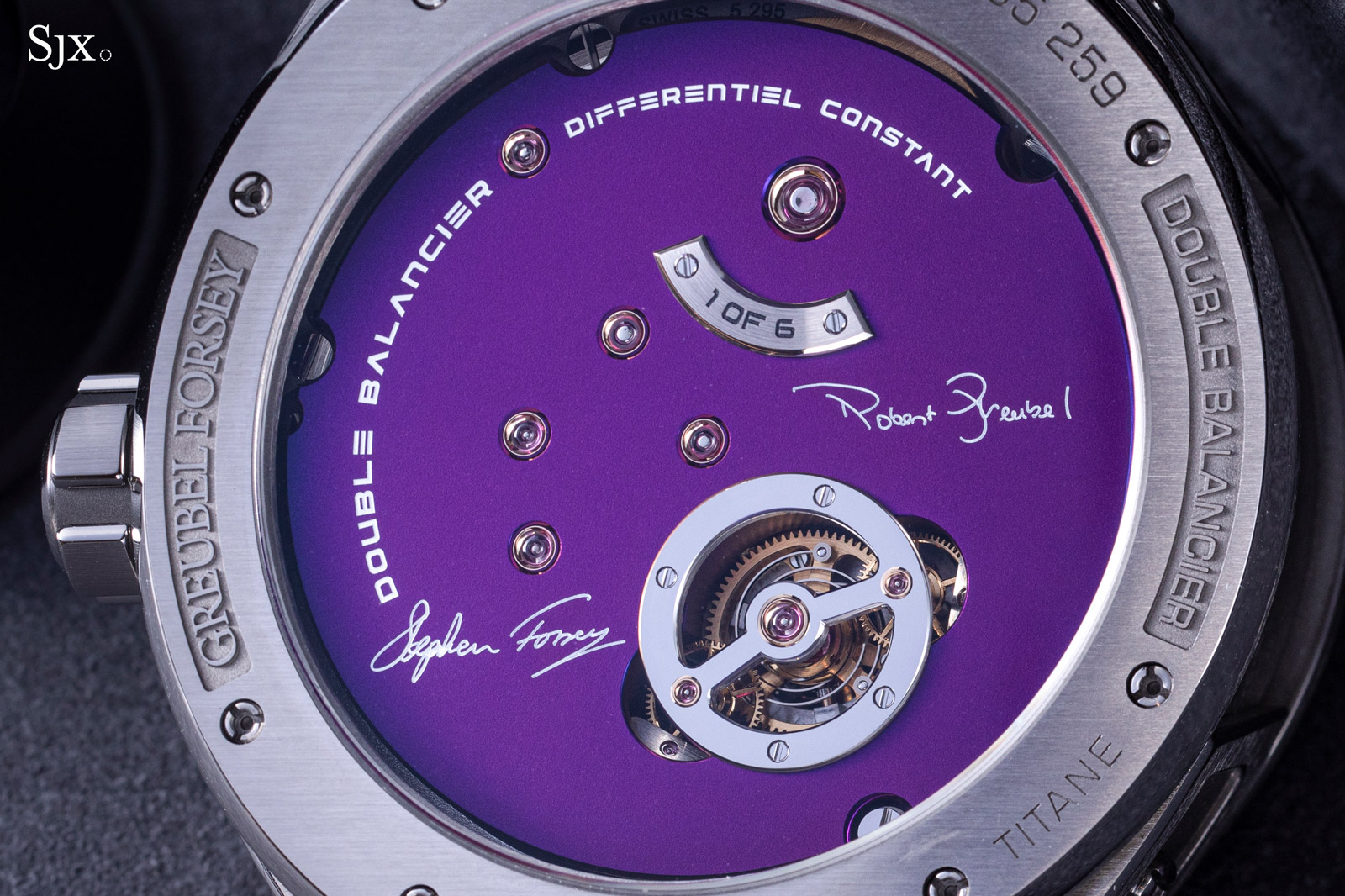 The main plate is engraved with the signatures of GF founders Robert Greubel and Stephen Forsey, a detail that is largely only owner of the watch 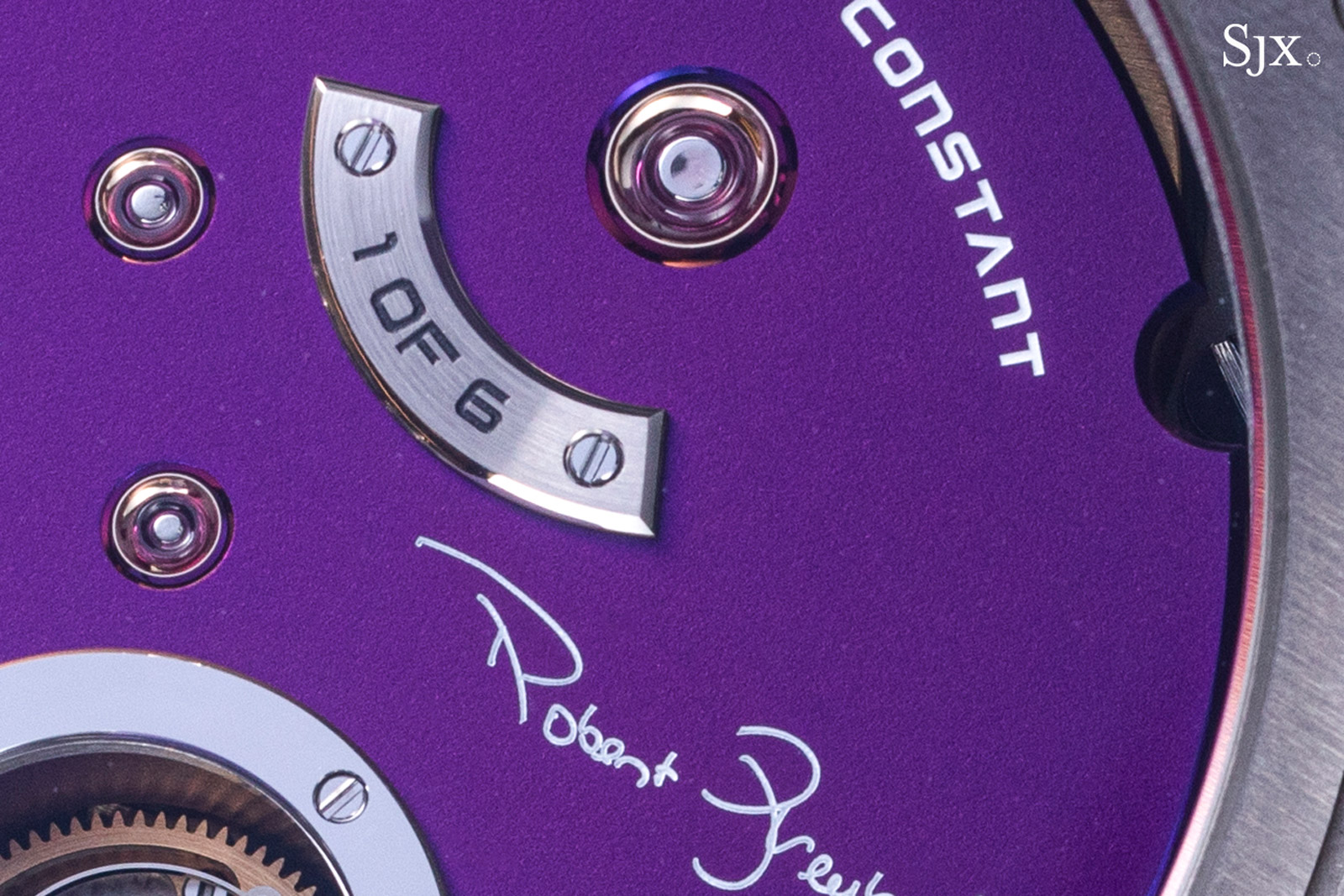 Another element worth noting is the engraved text on the main plate that’s been done in a modern font that is different from the rest of the typography on the watch. It creates contrast with the cursive script of the two signatures, but it can seem odd when set against the more conventional font used for everything else – you either like it or you don’t.

Striking even in its standard black and grey livery, the Double Balancier Convexe has been made even more striking with the SHH Edition. If you like bold aesthetics and high-end finishing, the SHH Edition is unquestionably better. While the new edition changes little in terms tangible elements, the Double Balancier Convexe is already finished to such a high level to begin with so there’s little more that can be done – without changing the price substantially.

The purple makeover transforms the watch into a sports watch that captures today’s collecting zeitgeist, while being a milestone of sorts for a brand that has traditionally been far more restrained. It is likely that this will be the first of a far more varied palette for GF’s line of sports watches.