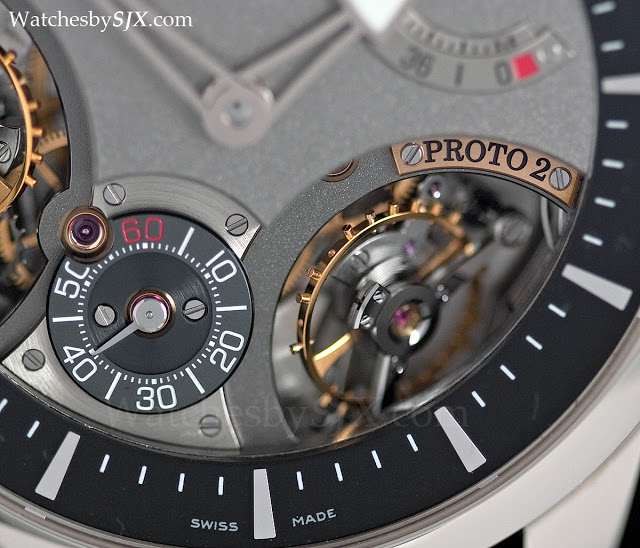 The Double Balancier 35° has two inclined balance wheels, one at nine and at other at five o’clock. Though each is inclined at 35°, their position means they are on different planes. That means neither balance is likely to be in a vertical or horizontal position when the watch is stationary. Linking the twin balance wheels is a spherical differential, which averages out the rate differences between the two. The Double Tourbillon Technique 30°, which won the Concours de Chronométrie 2011 timing contest, is based on a similar principle, except that it has twin, inclined tourbillons. According to Stephen Forsey, inclined balance wheels, whether they are in a tourbillon carriage or not, offer better performance than conventional balance wheels, all other things being equal. In fact, he adds that empirical tests conducted by GF prove this. With its frosted grey dial and black chapter ring, the Double Balancier 35° is visually less extravagant than the GF tourbillons. The twin balance wheels are also partially obscured due to the hour track and their position. Up close, however, it is not different, the finishing is still spectacular, with all the characteristics of GF decoration, including frosted bridges, jewels in chatons and relief text on the case. Unfortunately I cannot publish photos of the movement at GF’s request. But to see GF finishing up close, look at my photos of the Tourbillon 24 Secondes Contemporain. The Double Balancier 35° is a limited edition of six pieces in white gold, with a retail price of S$625,950.  Remember to check my photo report on the GF SIHH 2013 collection. – SJX