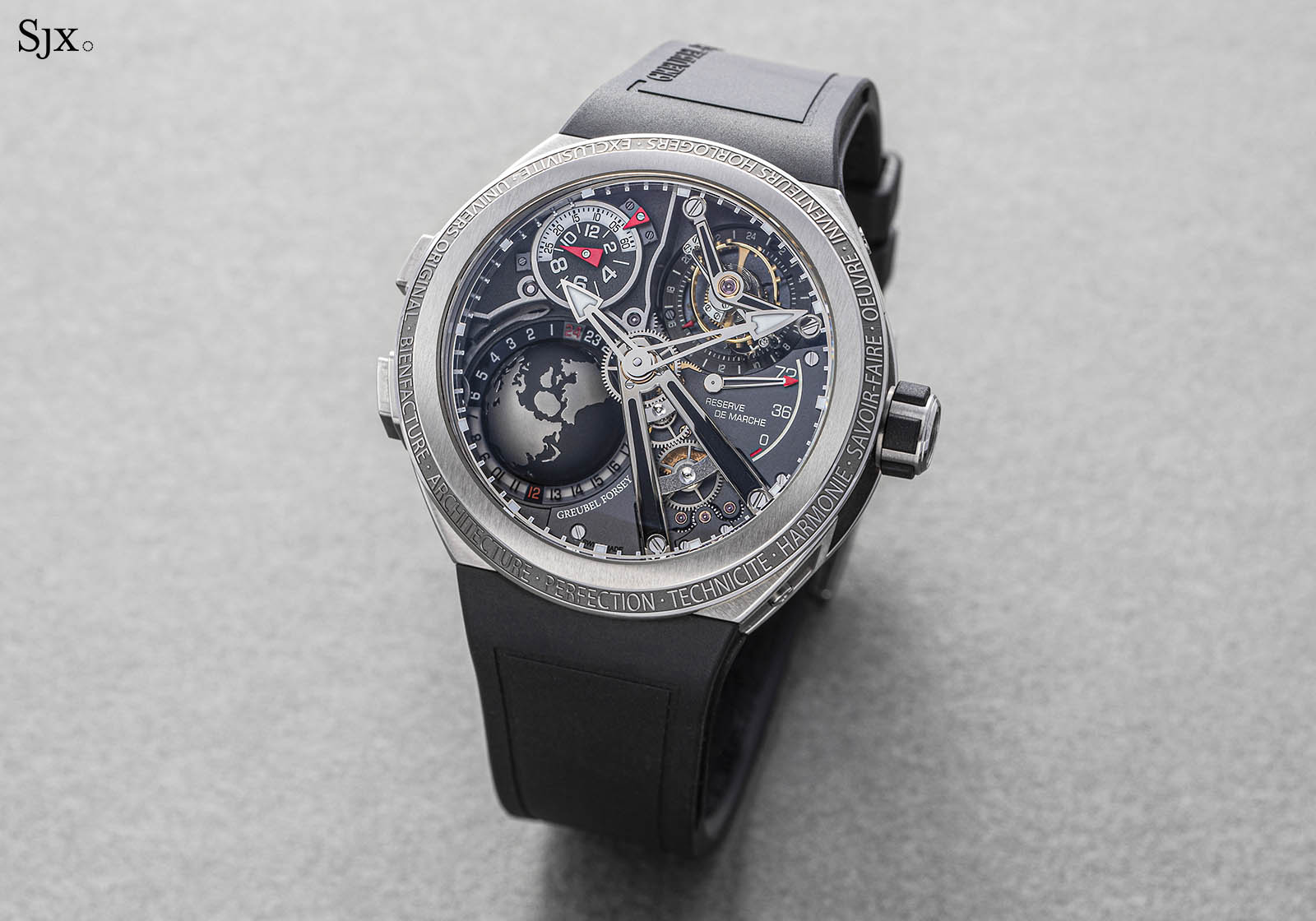 Even within the rarefied realm of haute horlogerie, Greubel Forsey has taken watchmaking to a level of craft few others can match – not just in terms of finishing, but innovation in chronometry while also establishing its own inimitable, three-dimensional aesthetic.

And now, the brand has combined all of that onto its first sports watch – the GMT Sport. While nearly identical to the existing GMT in terms of function, combining a world time with an inclined tourbillon, the GMT Sport looks nothing like any other Greubel Forsey. And its movement is mostly made of titanium, having been reconstructed to fit into the new ovoid case.

Despite being strikingly different, the watch is tremendously impressive on many fronts, especially in its finishing and construction.

Depth rated to 100m, the GMT Sport is a large watch that is organic in shape, with no right angles, a handful of edges, and only few flat surfaces. But it has a mechanical-looking style, with lugs secured to the case by visible screws and prominent pushers.

The construction is complex and masterful, with the most unusual feature being the crystal and bezel, which are curved on multiple planes. When viewed from the top, the case appears circular, but it is in fact, tonneau-shaped with an oval bezel that is curved vertically from 12 to six o’clock. To fit the curvature of the case, the crystal is also oval-shaped and curved, which further highlights the architectural depth of the movement. 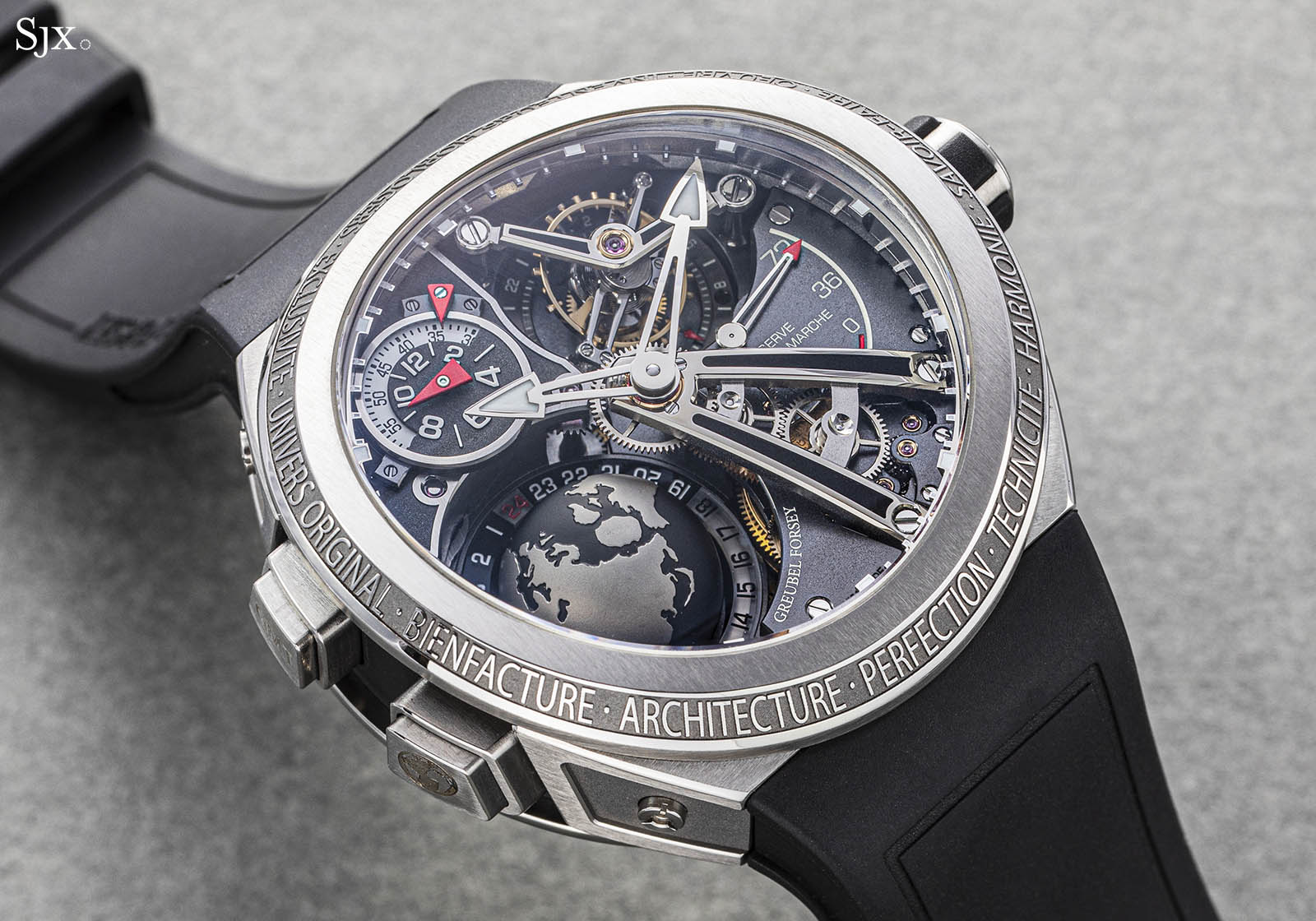 The circumference of the bezel extends slightly outwards from the case towards the integrated strap. Thus, the watch appears a lot larger than it wears; the bezel measures 45mm wide, while the case band is just 42mm wide.

The entire watch is 15.7mm in height, which is still large by any standard, but the titanium case and movement means it weighs a lot less than it looks. This is the tactile opposite of the usual Greubel Forsey watch that is large and heavy, this is large but light.

In fact, the entire watch, inclusive of the strap and buckle, is just 115g, or about 4oz – half the weight of an average Greubel Forsey in a precious metal case. 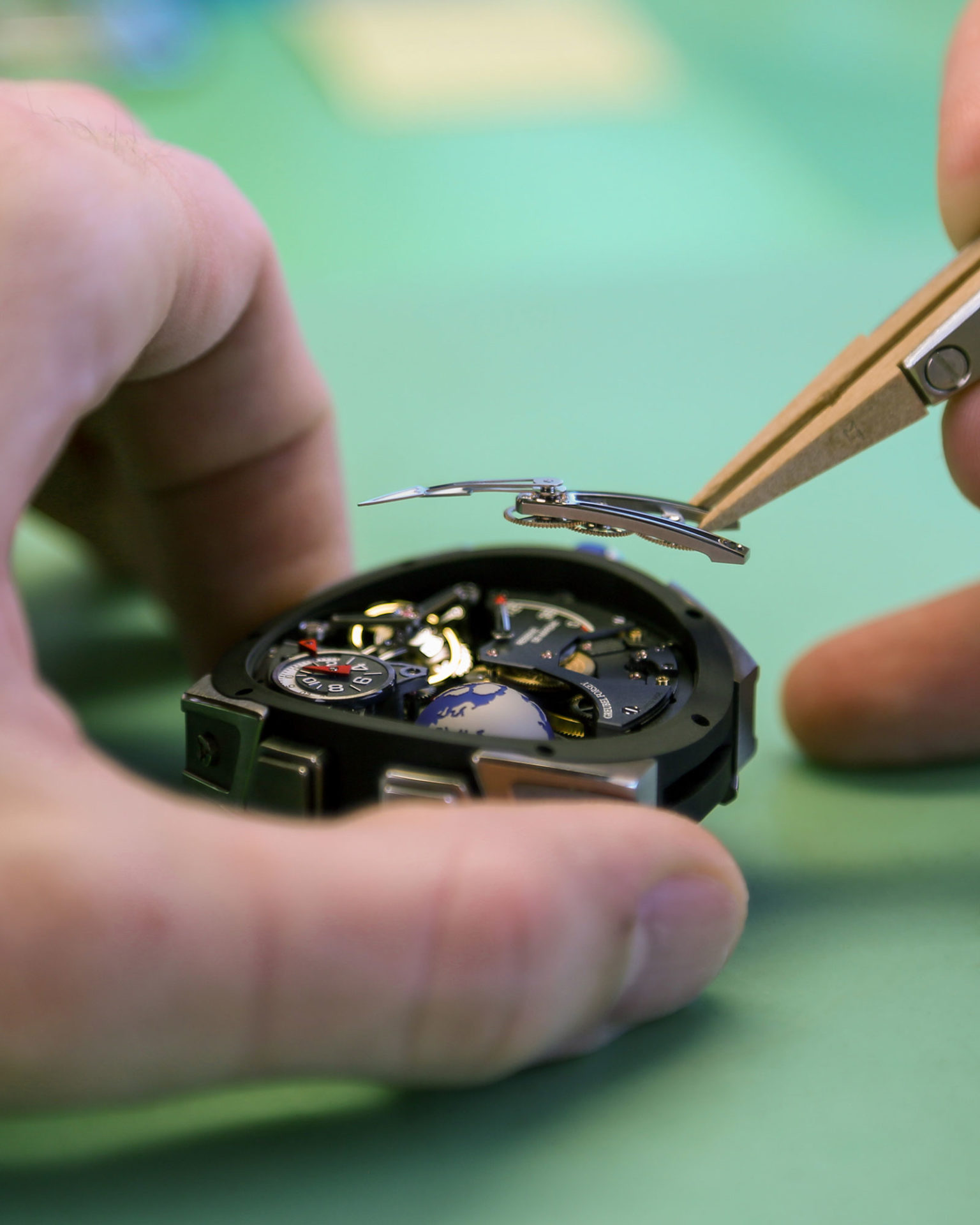 The curve of the watch is most obvious with the bezel and crystal removed. Image – Greubel Forsey

Though entirely titanium, the case is actually two tone: the front, back and lugs are in natural titanium, while the case middle is black-coated titanium. The result is slightly reminiscent of the cases of Richard Mille and Hublot, which rely on a similar two-colour sandwich construction. 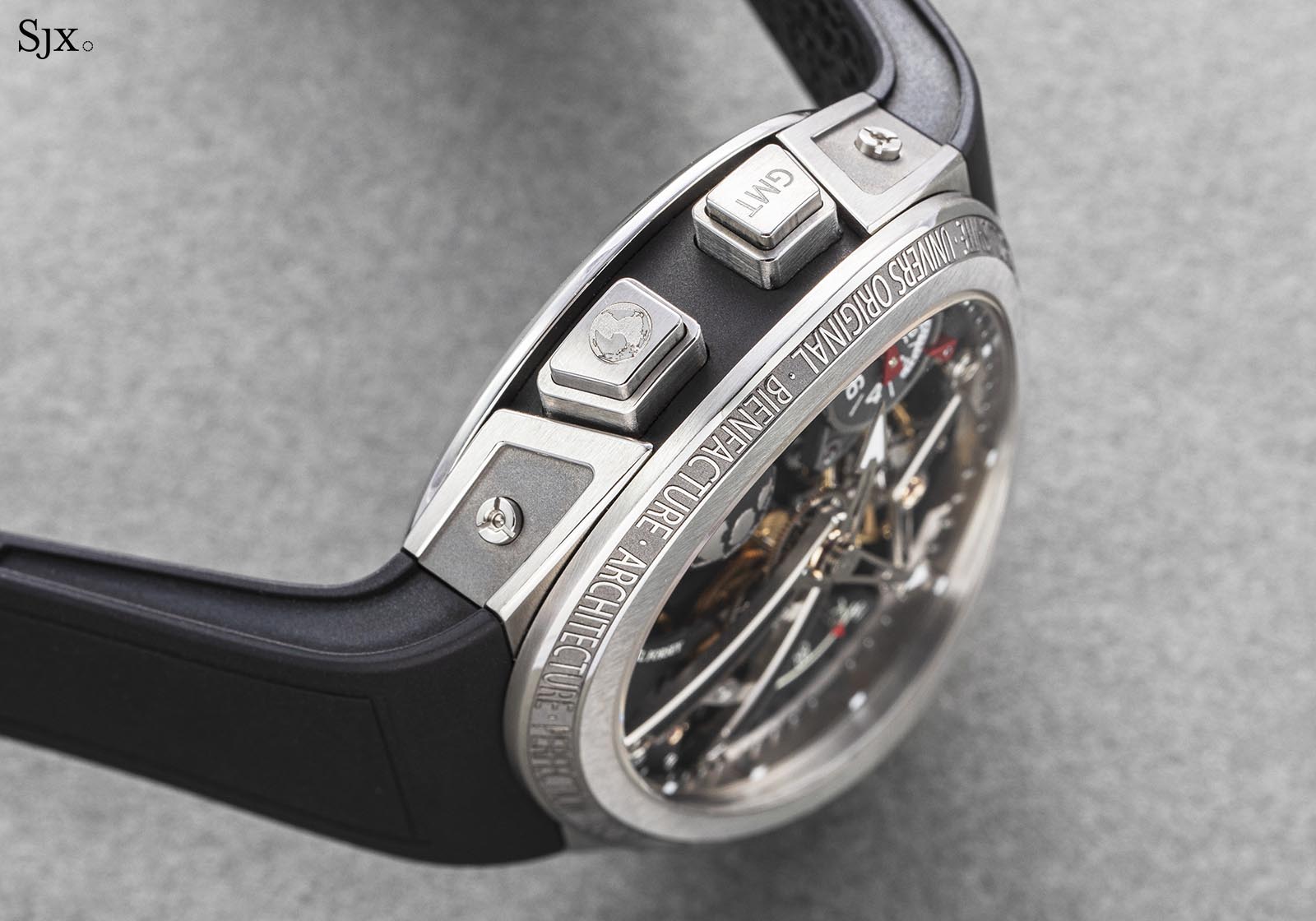 The two pushers are engraved to indicate their function: the “GMT” button selects the second time zone, while the second pusher synchronises local time with the globe Every element of the case is elaborately styled and finished. The lugs, for instance, have a brushed upper surface with chamfered edges, which surrounds a frosted recess.

The bezel alone is impressively decorated with several different finishing techniques. Its outer bevel features relief micro-engraving of the brand’s philosophy, a recurring element on Greubel Forsey watches that is often employed on the flanks of its watch cases. Impressively as the micro-engraving is, all that text on the bezel feels unnecessary, and a bit over the top. 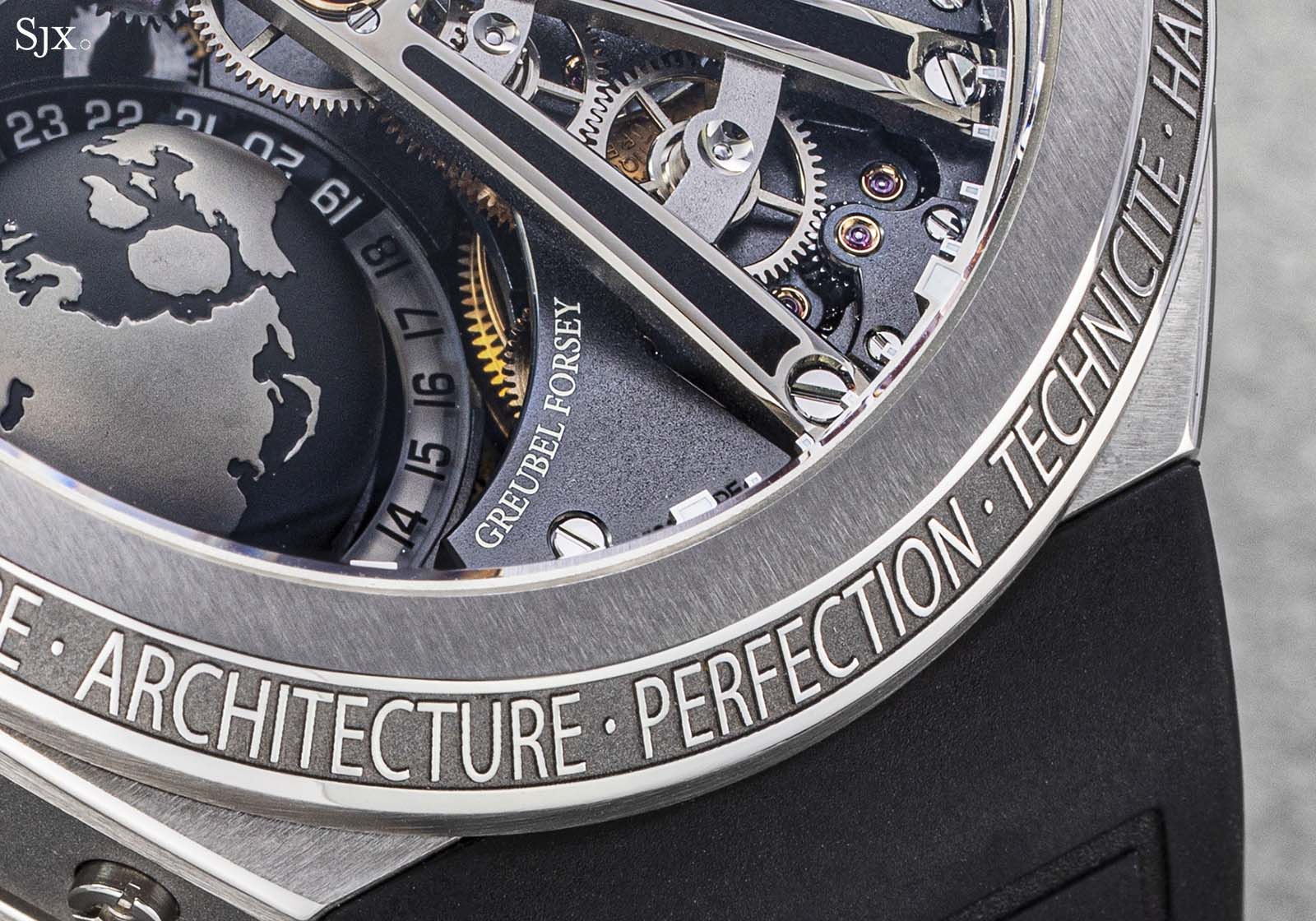 While the movement has essentially the same functions as the first GMT watch, it was rebuilt, starting from scratch, in order to fit the new oval, curved case.

The watch is a world timer as the globe works in conjunction with a cities disc on the back as well as a second time zone indicator at 10 o’clock. But the centrepiece of the dial is the three-dimensional globe at the eight o’clock position that makes a complete, counterclockwise rotation every 24 hours – moving in the direction of the earth’s rotation. The globe, fixed to the base plate only on its base, offers an intuitive view of time all over the world thanks to the 24-hour ring in sapphire on its edge.

With the ring, one can approximate the time around the world – though knowledge of geography is required. And it also doubles as a day and night indicator, with the 24-hour ring departed into two halves with the darker portion indicating nighttime, and the lighter, daytime. The 24-hour globe is combined with another one of Greubel Forsey’s major inventions – a 25° inclined tourbillon that moves speedily, making a revolution every 24 seconds, achieved with a lightweight cage. While mechanically identical to the inclined tourbillon in earlier models, the stylistic execution here has been tweaked to match the design of the watch. So the tourbillon is held in place by a black-polished steel bridge that forms a gentle “V”, but one with a recessed centre featuring a frosted, black-coated surface.

While such exotic tourbillons serve more of a visual purpose than anything else, the rationale behind the inclined tourbillon – and all of the brand’s tourbillons – arises from its deep interest in improving precision. In fact, improving the tourbillon for use on the wrist – as opposed to in a static pocket watch or clock – is one of the fundamental impulses of the brand.

An inclined tourbillon, as opposed to a vertical or a bi-axial tourbillon, allows a fairly large balance wheel to be used, without requiring an unreasonably thick watch case.

According to the Greubel Forsey, inclining it from the horizontal plane avoids the most extreme gravitational errors in the balance wheel, while still averaging out errors on a second plane of the balance. The result, in effect, comes close to that of a double-axis tourbillon while keeping the height of the movement manageable. While typical Greubel Forsey movements use German silver for their bridges and base plates, the GMT Sport movement is almost all black-treated titanium for maximum lightness. But the finishing is in the usual Greubel Forsey style, with a frosted finish on most flat surfaces.

As with the earlier GMT watch, the dial is on three levels: the raised sub-dial for the second time zone as well as with a rotating disc for the small seconds, the dial, and the sunken apertures for the globe and tourbillon.

But on the GMT Sport the various elements of the dial have been rearranged to maximise the visual depth and fit into the curved case. The hour and minute hands occupy the topmost plane of the movement, with all other elements sitting progressively lower.

The tourbillon is positioned diagonally across the 24-hour globe, and everything is surrounded by a raised minute track on the periphery of the dial with markers that point towards the centre of the dial. All the elements are elaborately conceived and finished; an arched, V-shaped bridge rises upwards to hold the hour and minute hands, with the canon pinion of the hands sitting in a gold chaton. Filled with Super-Luminova on their tips, the hands are open-worked and curved lengthwise to match the curvature of the crystal. 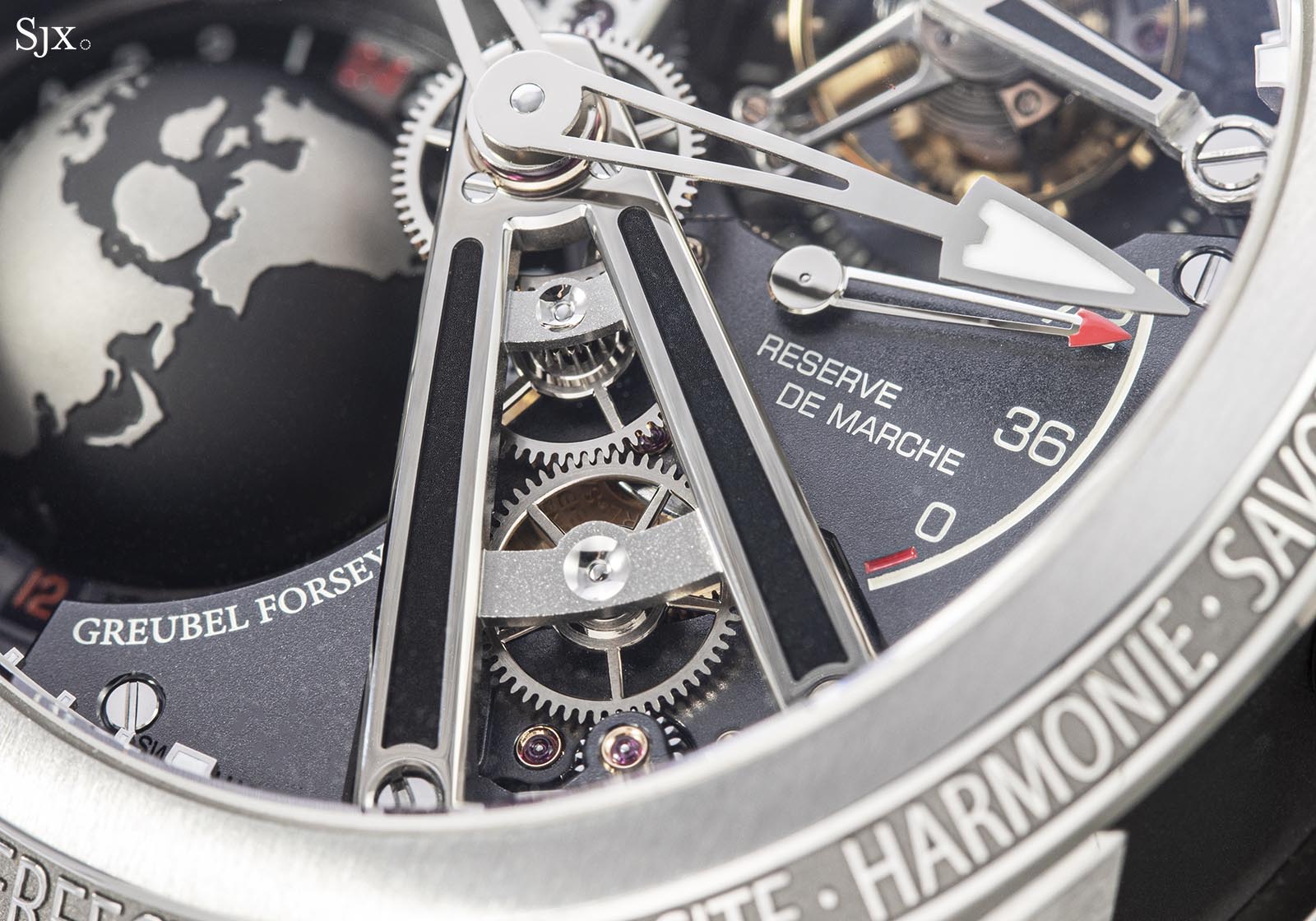 Because the bridges and base plate are mostly black coated, the steel hands stand out. They are driven by a visible gear train – contained within the V-shaped bridge – that is visually separate from the tourbillon. Located behind the going train for the hands, and just barely visible, is a differential for the power reserve indicator that is again micro-engraved with the brand’s values, rendered in a far smaller font than on the bezel naturally.

Like the tourbillon bridge, the bridge for the hands has a recessed, black-treated centre while its edges is finished with anglage. However, the bridges between the arch for the going train wheels have a frosted finish with no bevelling, done to match the frosted finish of the bridges. Despite being a relatively minor element, the pivot holes on the two tiny bridges are beautifully countersunk – a testament to the high level of decoration done at Greubel Forsey. 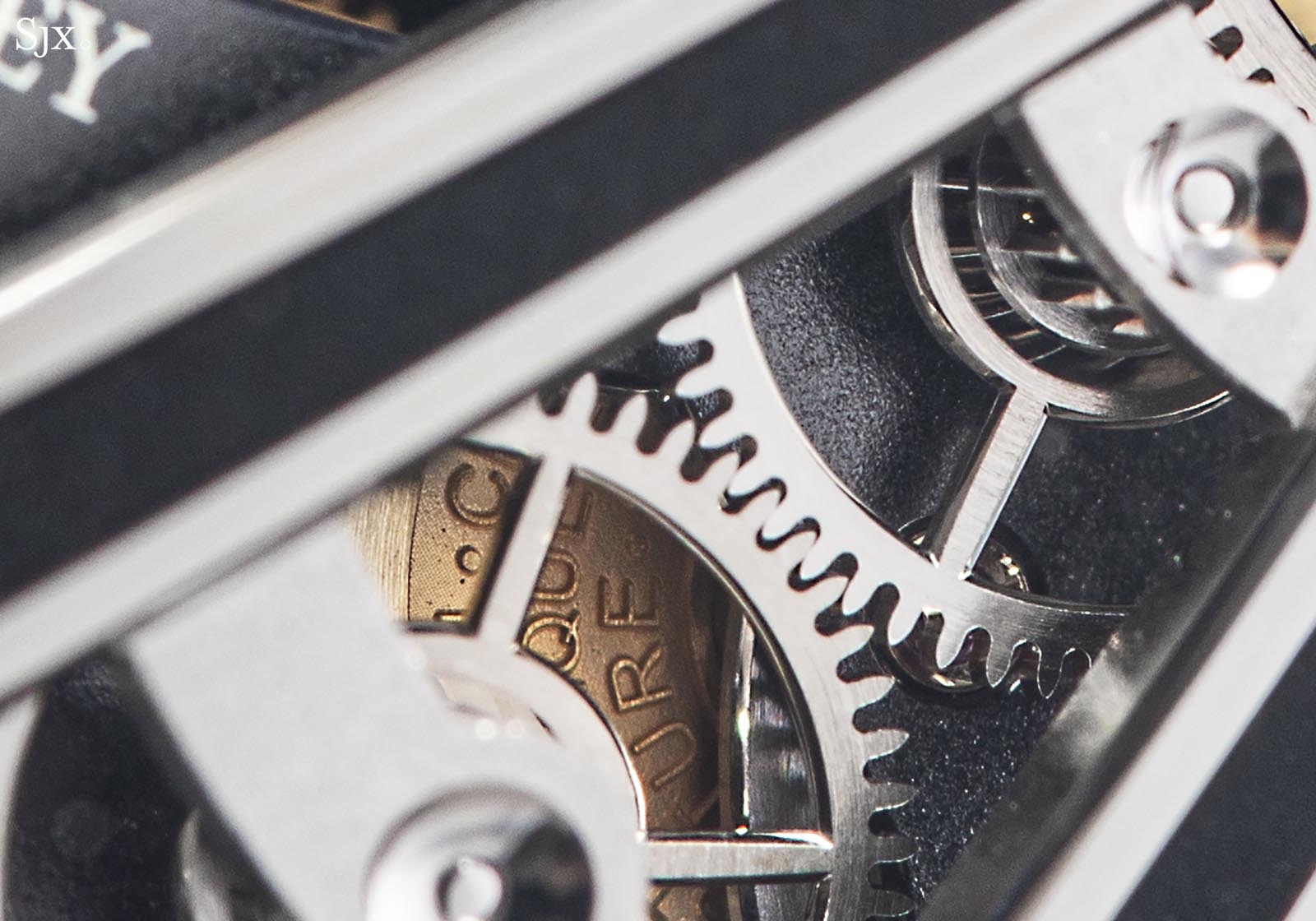 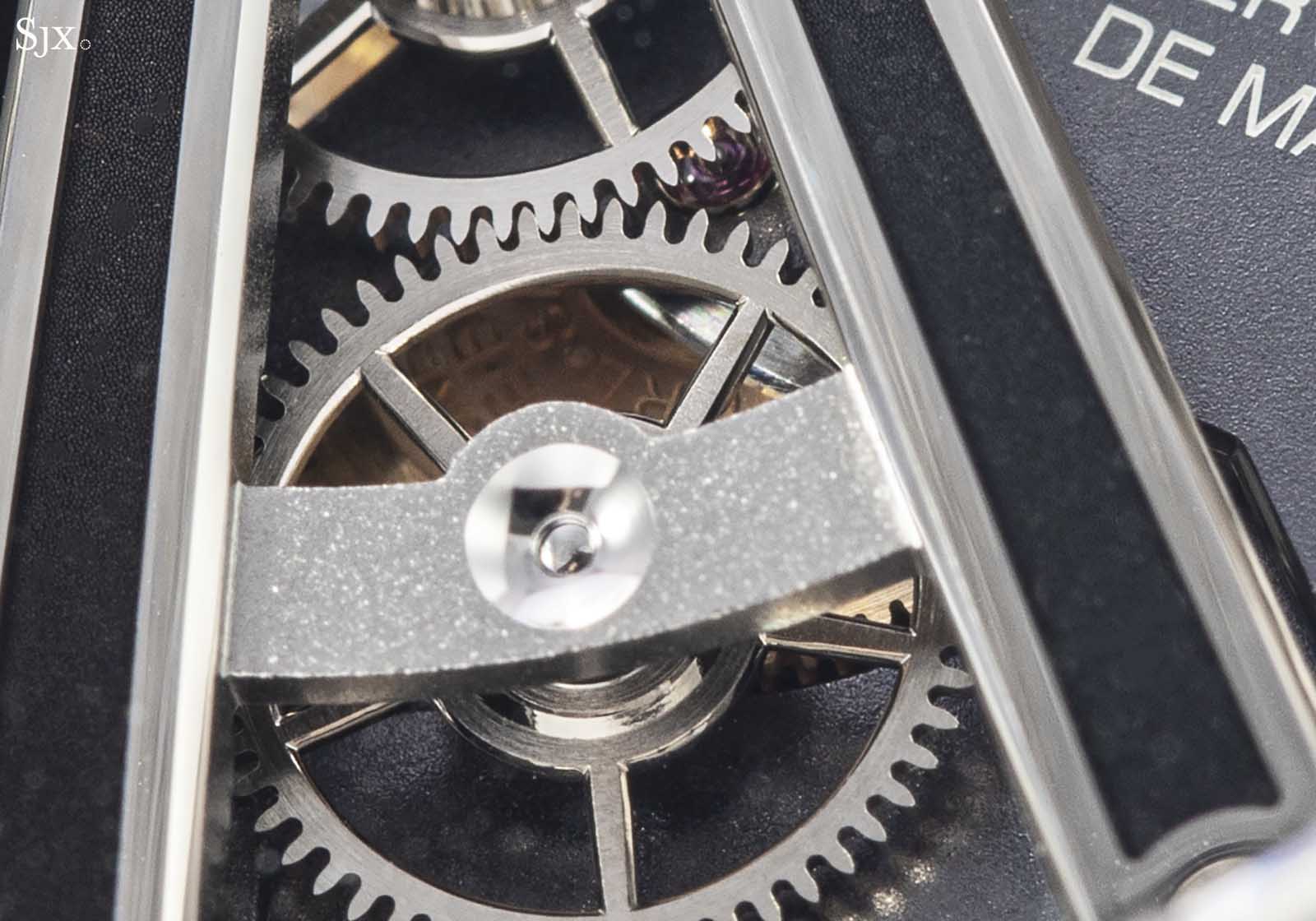 Notice the polished, chamfered edges on the spokes and inner rims of the gears

As it is with the two-tone titanium case, the movement brings to mind other watches. But the resemblance is shallow – the finishing on the GMT Sport movement far surpasses the others.

While both the finishing and magnitude of reconstruction (as compared to the original GMT) are vastly impressive, it is worth noting that the movement has not been tweaked for sporty purposes. For instance, the automatic movement in the Lange Odysseus is based on an existing movement but has a larger balance wheel to increase inertia while running at a higher frequency, and consequently increasing stability even in the face of shocks. But perhaps nothing was necessary for the GMT movement.

Cities in a spiral

On the back of the watch, a world-time disc displays the time in 24 time zones, each represented by a city, with all city names engraved on a sapphire disc.

Smartly, the disc also takes into account daylight savings time (DST). The cities in time zones that observe DST are shown in white so the correct local time can read using the inner 24-hour ring during the summer. And in the winter, the outer, relief 24-hour ring on the case back is used.

A notable difference between this and the original GMT is the removal of the gilded wheel that represented the Sun; on the original model the wheel indicated the time zones that were in day time, a somewhat redundant function given everything on the front, so nothing was lost by doing away with it. With the GMT Sport, Greubel Forsey has built a sport(y) watch with a beautifully constructed case that is original, despite gently evoking other case designs. And importantly for a sports watch, it is wearable, despite its size.

Perhaps more crucially, the watch is not just a new set of clothes. It boasts a new movement architecture that creates greater depth on the dial, while still retaining the functionality of the original GMT. But no sports-specific modifications were made to the movement, which would have been an interesting evolution of the calibre, but maybe unnecessary if its current construction can cope fine with increased activity.

And, the GMT Sport is priced proportionately, at least by the standards of such watches, with a retail price of just under 500,000 francs, or about 10% less than the GMT.