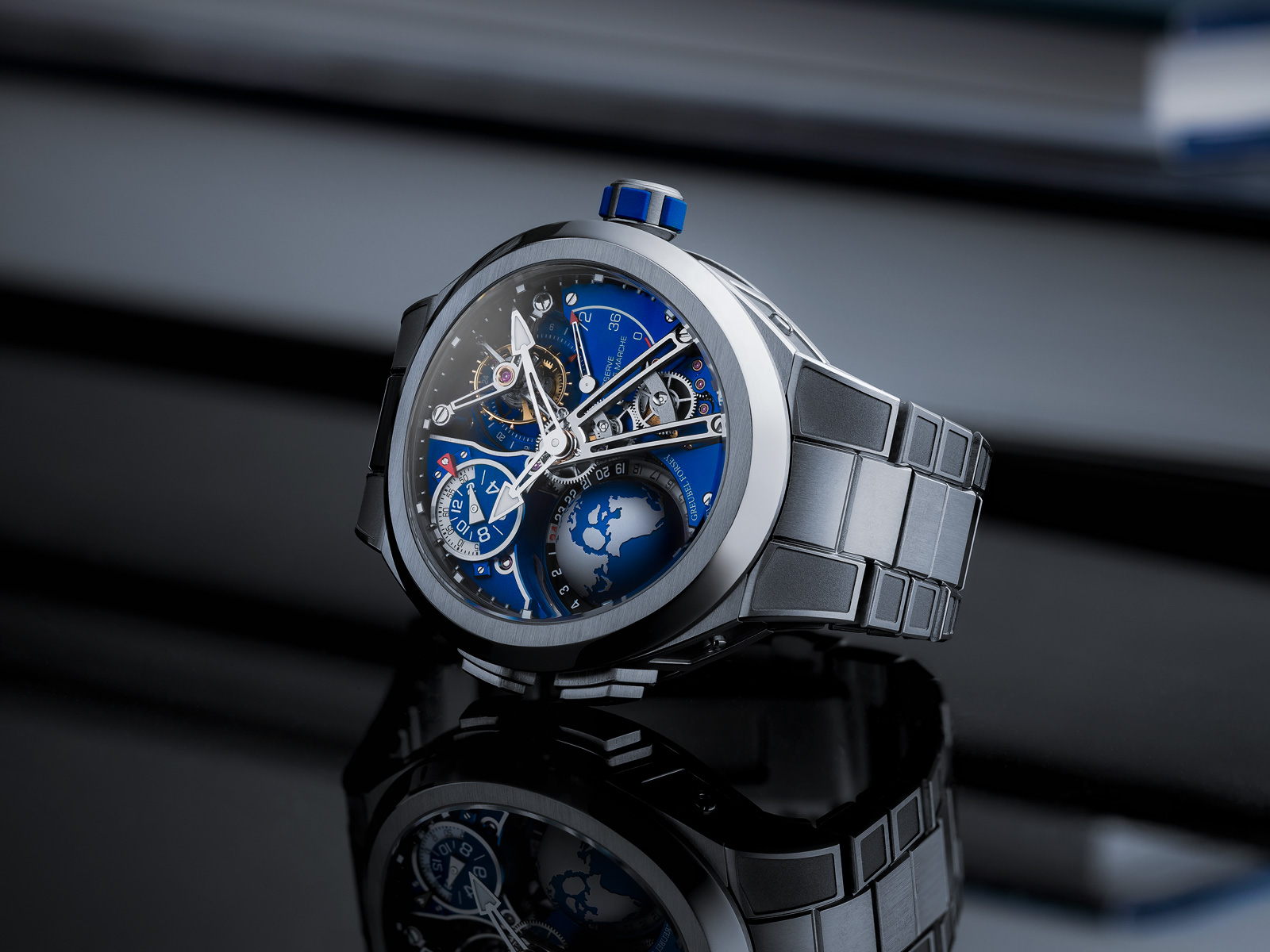 Best known for its ultra-exotic tourbillons, Greubel Forsey builds movements with unique three-dimensionality and exemplary finishing. In 2019, it started applying its unusual brand of watchmaking to the sports watch for the first time with the GMT Sport – a world time with inclined tourbillon – and now follows up with the new GMT Sport that has the same movement but the addition of an integrated titanium bracelet, a first for the brand.

Although the integrated-bracelet sports watch may be new for Greubel Forsey, it’s now a familiar and fashionable concept. Greubel Forsey is relatively late to the party – beyond veterans like the Royal Oak and Nautilus, such sports watches are already found at almost every price point, from Citizen’s US$2,000 Series 8 to the Lange Odysseus.

That said, the GMT Sport is noteworthy for one simple reason – it’s the most complicated, and perhaps best finished, integrated-bracelet sports watch money can buy, combining a world time, dual time, and an inclined tourbillon. So while Greubel Forsey took its time with the concept, the brand certainly executed it in style. 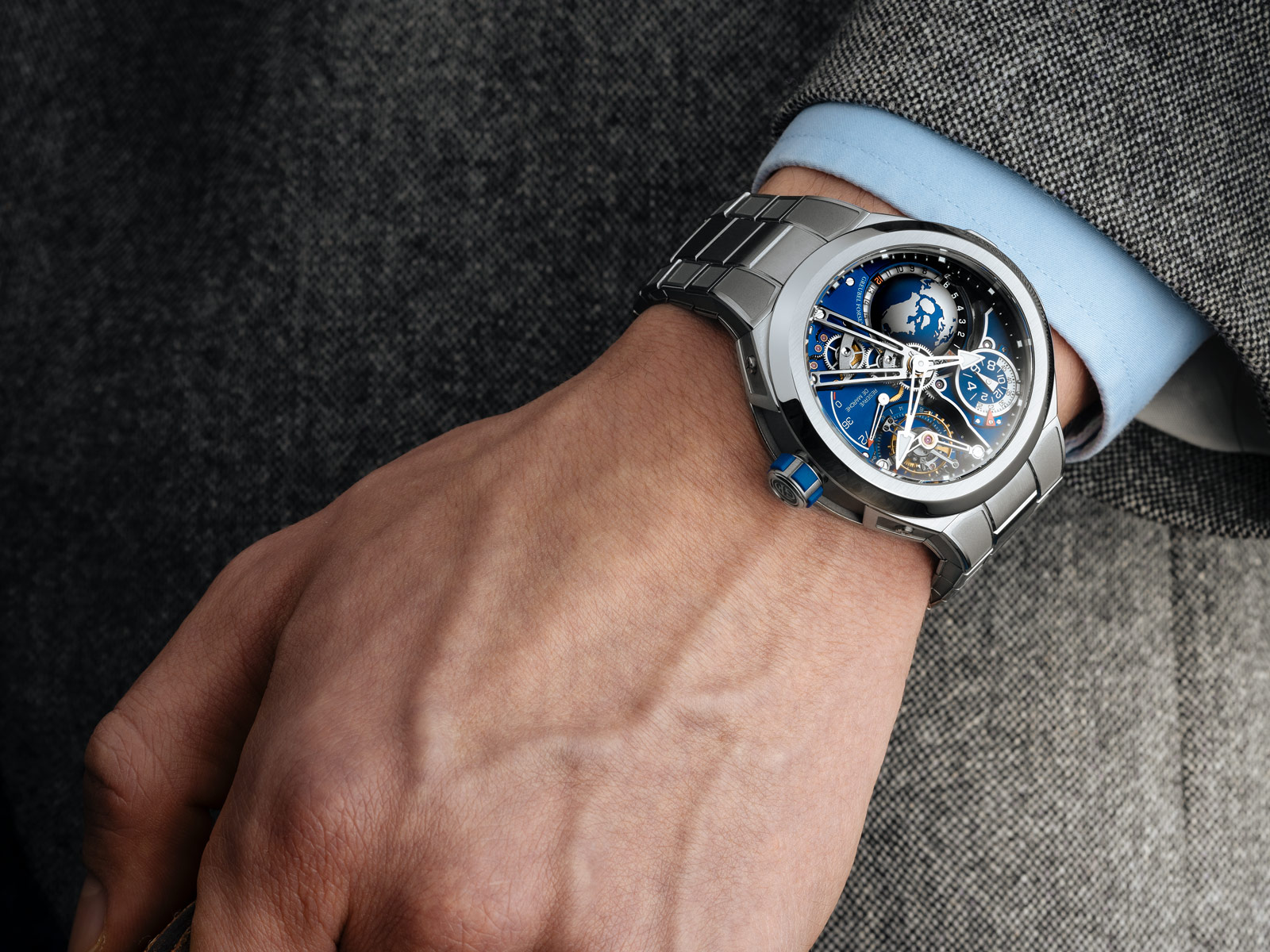 I much prefer the new GMT Sport over the earlier version. For one, the bezel is now plain, devoid of the tiny, relief inscriptions that are something of a Greubel Forsey signature but don’t quite work on a sports watch.

The dial is now entirely in blue, giving the new GMT Sport a more modern look (that admittedly is also fashionable given the popularity of blue-dial sports watches). But the changes are minor facelifts, and the watch retains the distinctive ovoid case and the familiar three-dimensional dial (or more accurately, movement) that had made the original GMT Sport a hit amongst serious watch collectors.

Starting at CHF480,000 for the version on a rubber strap, the new GMT Sport is priced identically to the earlier generation. The integrated bracelet costs about 10% extra, or an additional CHF40,000. That’s more than the retail price of a Royal Oak ref. 15500ST or a Patek Philippe Nautilus ref. 5711/1A, though I suppose relative to the price of the watch, it is a very modest upgrade for the 33 individuals who will own one. 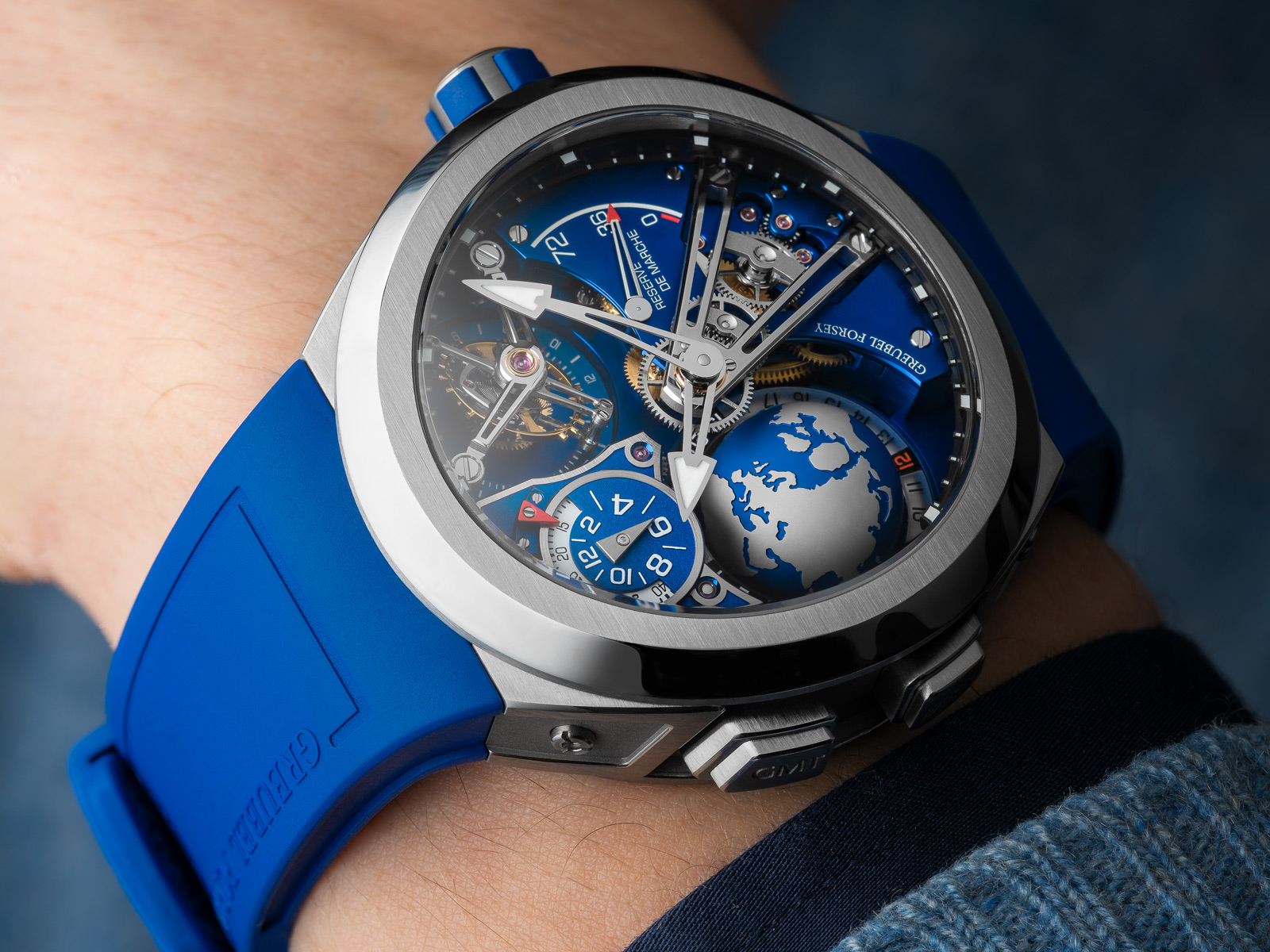 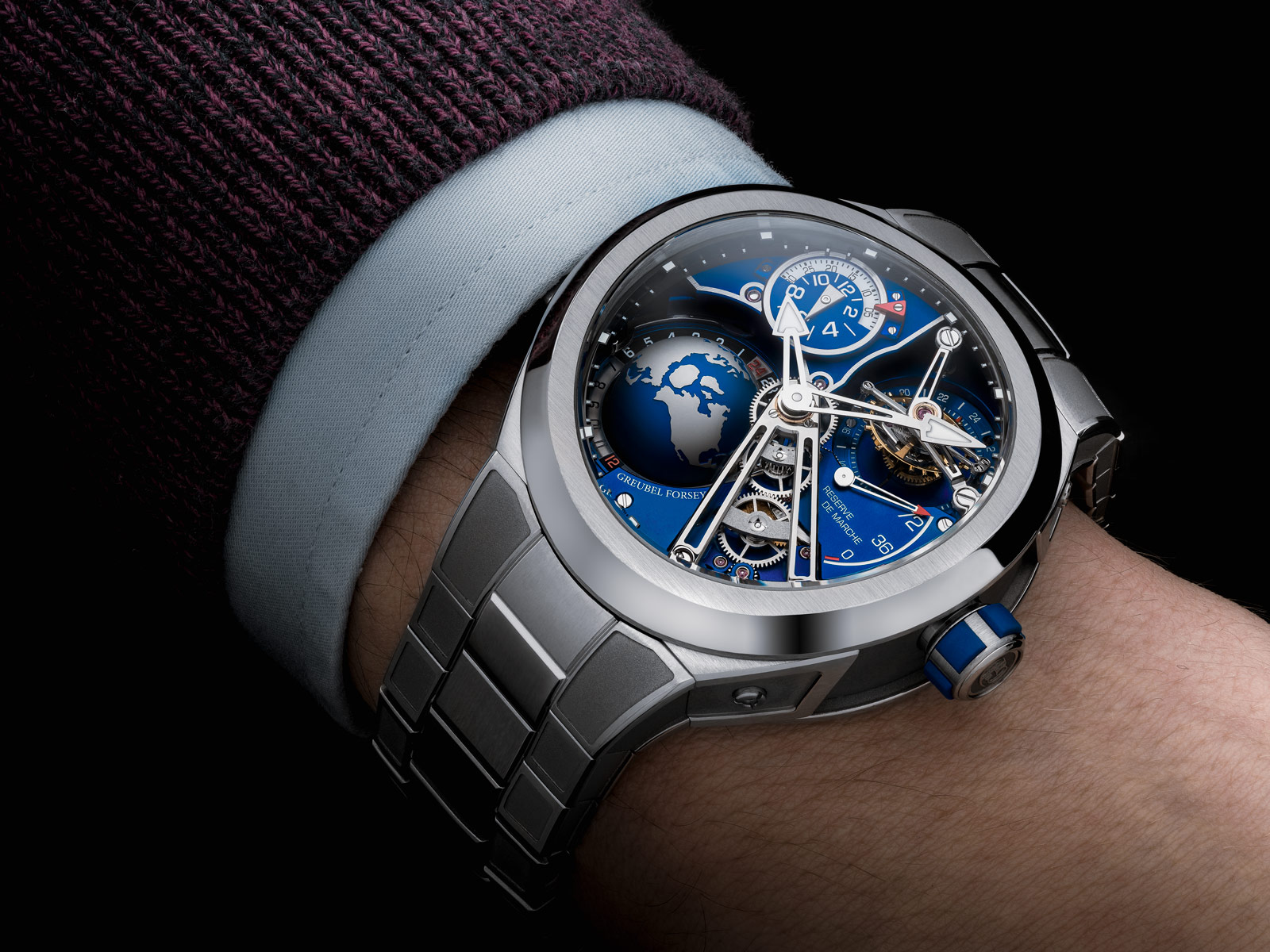 An exercise in hand-finishing and ergonomics, the GMT Sport is perhaps the ultimate sports watch. Clean and sleek, the elliptical bezel features hand-finished linear brushing on its top as well as polished edges. The result is a more elegant aesthetic reminiscent of the defining luxury-sports watches like the Nautilus.

However, unlike many of its compatriots, the case of the GMT Sport is subtly curved, giving it a profile similar to a Richard Mille tonneau case, allowing the watch to sit more ergonomically.

And the ergonomics matter because the watch is large. The diameter is a manageable 42 mm, but the case is a thick 15.7 mm high. Beyond the curved form, the lightness of the titanium case (and now bracelet) also helps its wearability. And unlike most Greubel Forsey movements that are in traditional German silver, the bridges and base plate of the GMT Sport movement are in titanium, further trimming its weight. 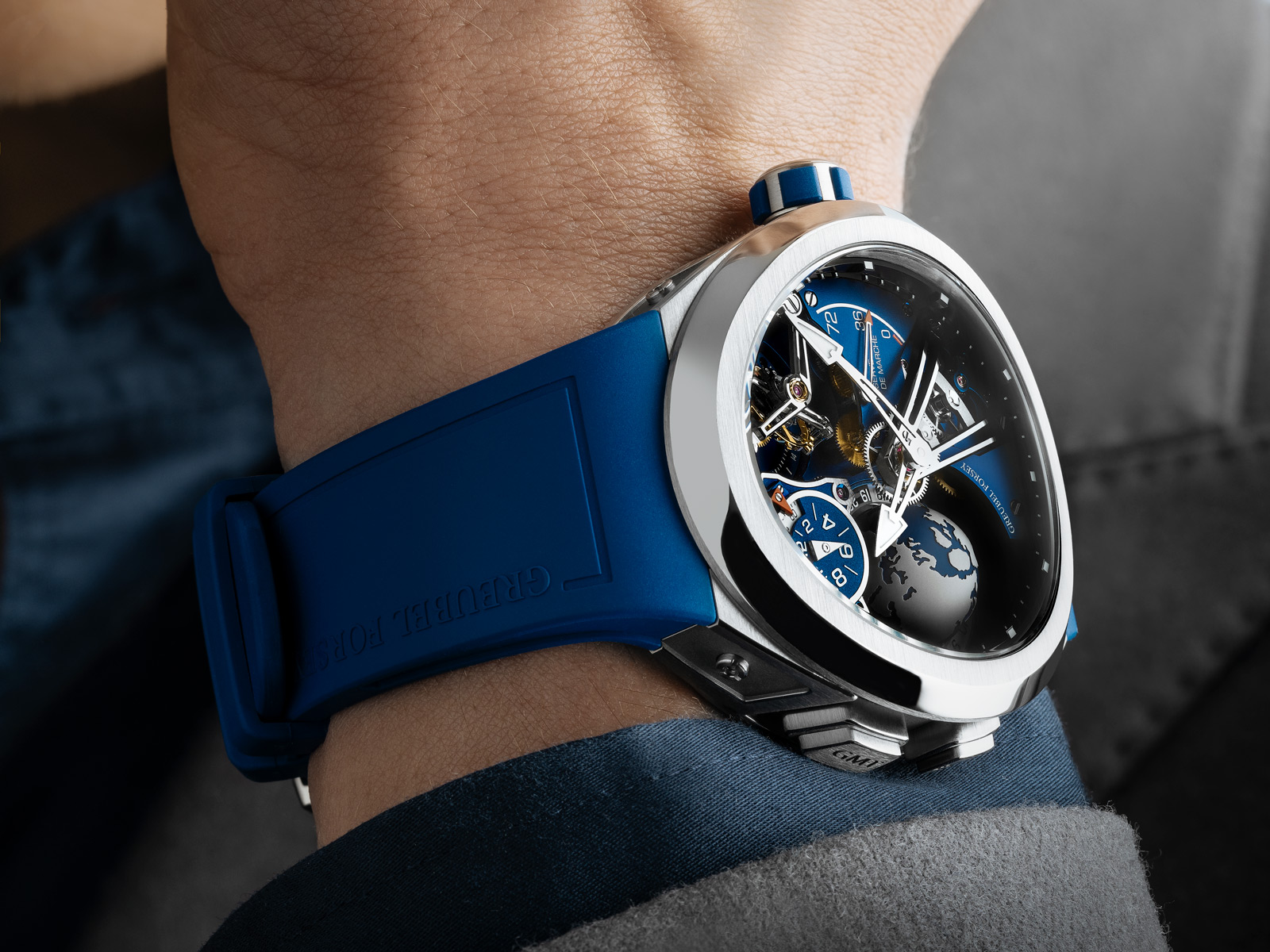 The titanium bracelet appears very well done, as it should be for what it costs. Not only does it integrate seamlessly, all of its links also exhibit remarkably detailed finishing, namely straight-graining, frosting and hand-polished bevelling. Even the sides of the bracelet are natural extensions of the case, and feature three distinct types of finishing.

Notably, the large clasp incorporates a ratcheting mechanism (that is likely identical to that found on the Lange Odysseus), which allows for fine adjustment of several millimetres either way. 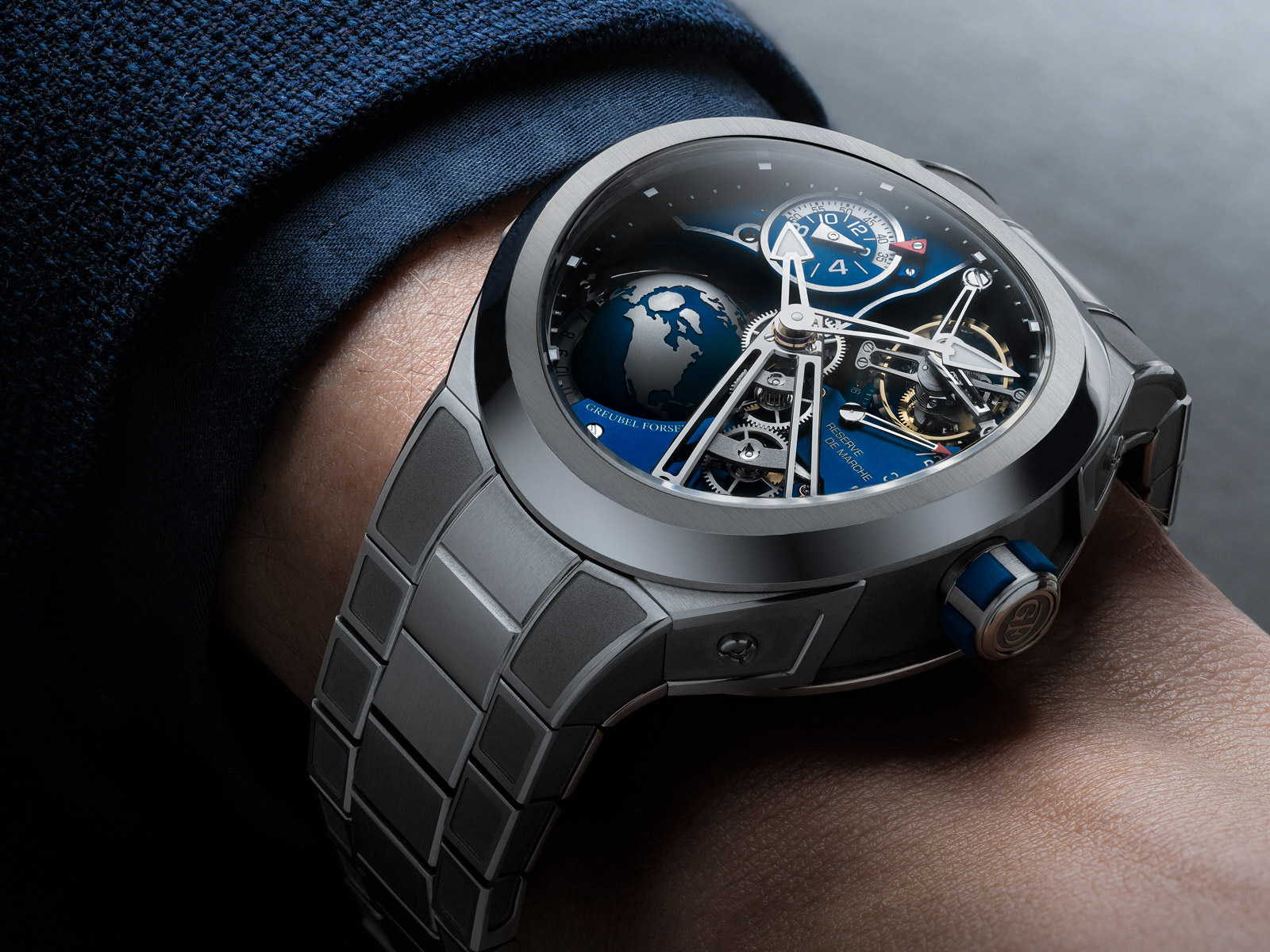 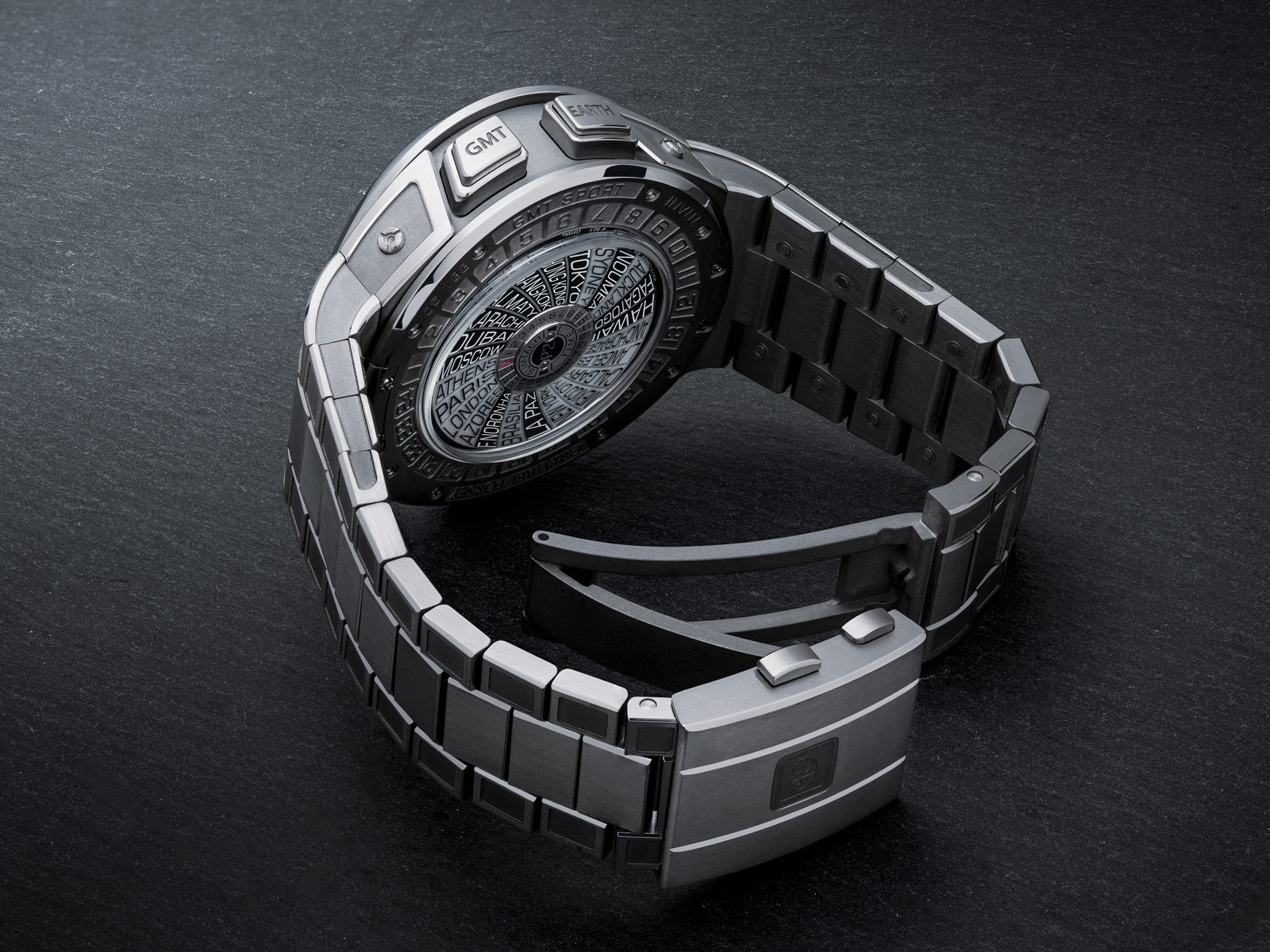 The entire dial of the GMT Sport is been rendered in matte blue with accents in red. Despite the many indications on the dial, it is relatively legible, with the displays sitting on three levels: the main dial for the time; the second time zone and rotating disc for the small seconds at 11 o’clock as well as the power reserve at four; and the sunken apertures for the globe and tourbillon.

Even though it’s the traditional highlight of a Greubel Forsey movement, the 25° inclined tourbillon – which makes a revolution every 24 seconds – arguably plays second fiddle to the three-dimensional globe.

The globe completes a counterclockwise rotation every 24 hours, moving in the direction of the Earth’s rotation, allowing the wearer to see the approximate time around the world intuitively thanks to the 24-hour sapphire ring circling the globe. And the globe also doubles up as a day and night indicator.

Over on the back is a large world time disc that allows the wearer to see the time around the world simultaneously as on a traditional Cottier-style world time. 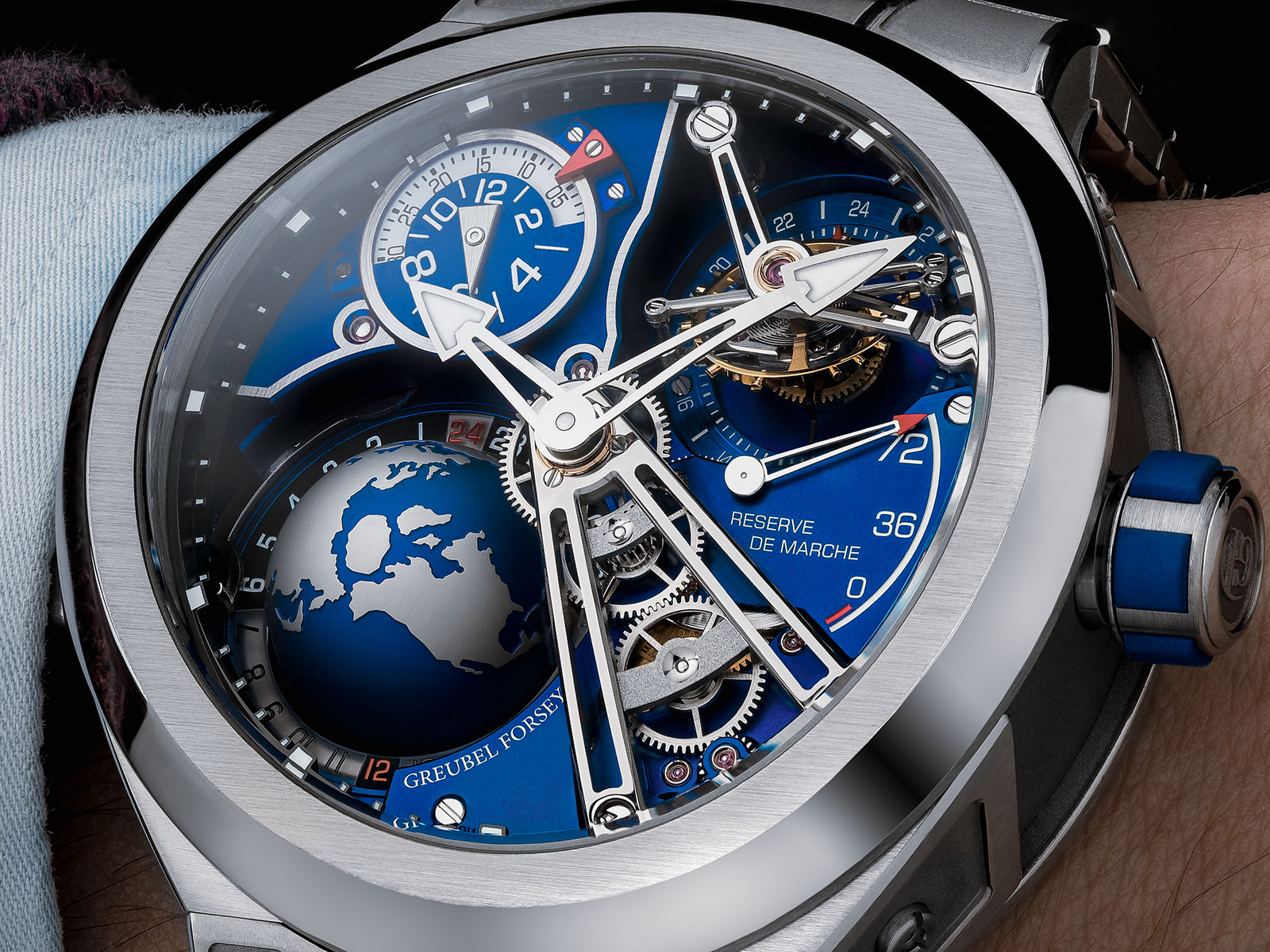