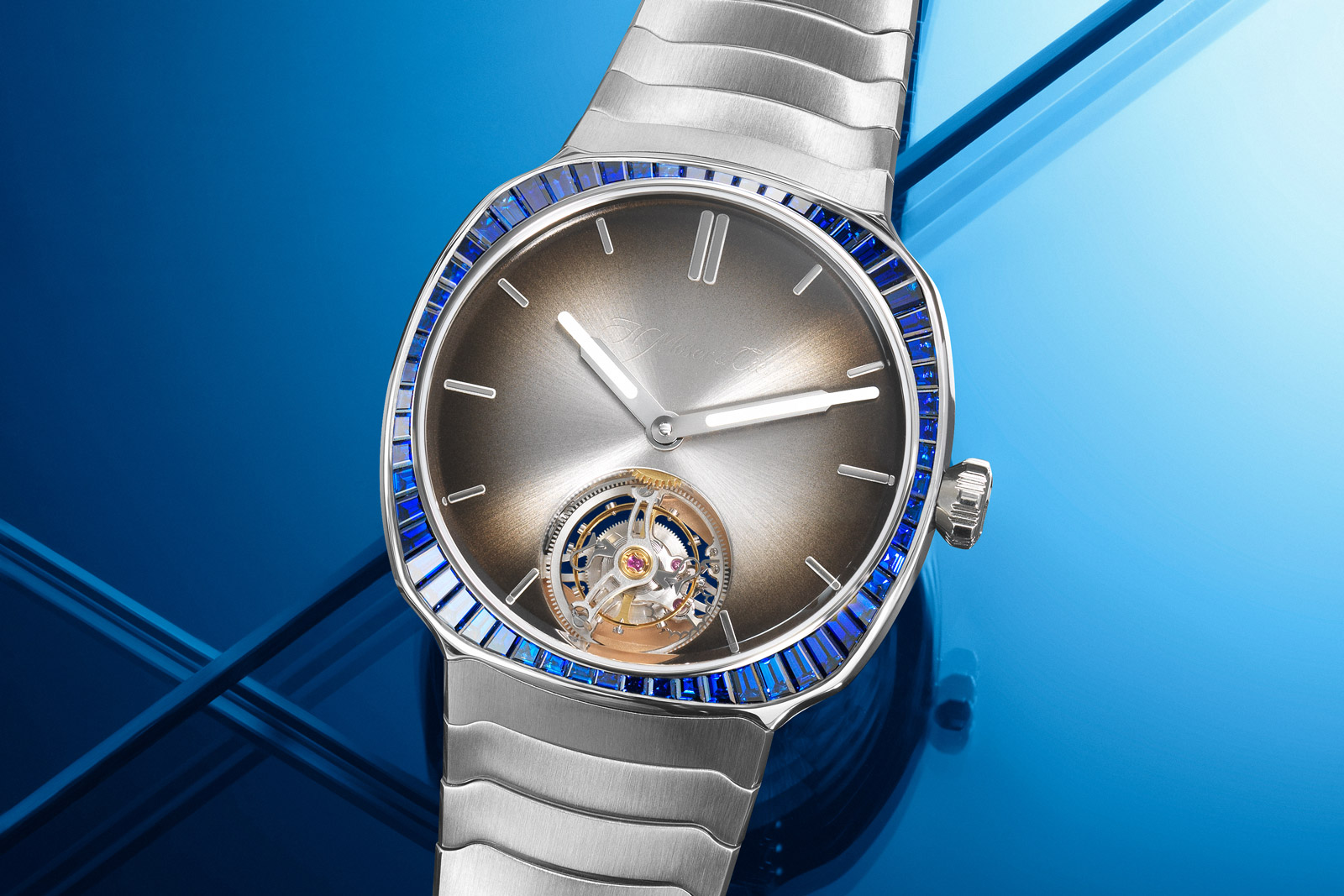 It’s been six years since Bucherer inaugurated Bucherer Blue, a line of special-edition watches made specifically for the Swiss retailer by watchmakers ranging from Tudor to Audemars Piguet. Dressed in the Bucherer’s corporate colour of dark blue, the Bucherer Blue collection has become one of the retailer’s defining qualities.

The latest to join the collection is a sports watch from H. Moser & Cie., the Streamliner Tourbillon Bucherer Blue, which features a flying tourbillon on a smoked grey dial framed by a ring of blue sapphires. 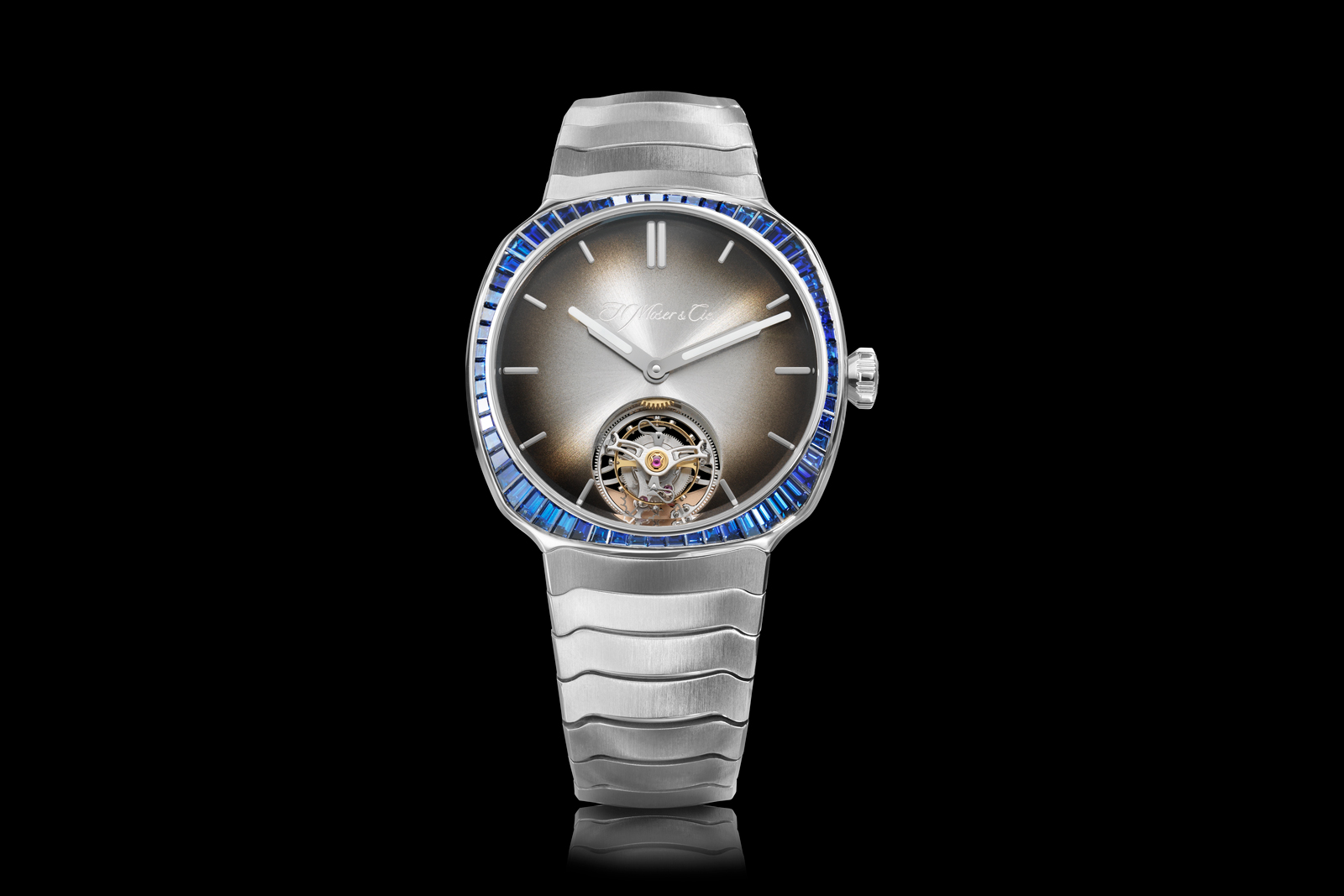 Visually simple in the typical Moser style but far from plain, the Streamliner Tourbillon is an attractive watch to begin with. It retains the no-frills look of a sports watch yet while managing to dial up the technical features with a double-hairspring flying tourbillon at six o’clock. The Bucherer Blue edition takes the idea of contrasting simplicity and complexity further with a gem-set bezel that certainly adds sparkle without taking away from the clean lines of the Streamliner.

At a distance the bezel might evoke the coloured bezel inserts that are common in sports watches, though up close it is undeniably bling. But the gems blend well into the design as the uniform colour of the stones and graduated, geometric pattern they form both suit the Streamliner aesthetic perfectly. And the dial is a restrained, pale grey – naturally in Moser’s trademark smoked finish – that doesn’t compete with the sapphires for attention.

At US$119,900, the Bucherer Blue edition with its steel is identically priced to the recently-launched Vantablack edition that is all gold, but perhaps makes more sense given the better suitability of steel for a sports watch as well as the value of the gemstones. 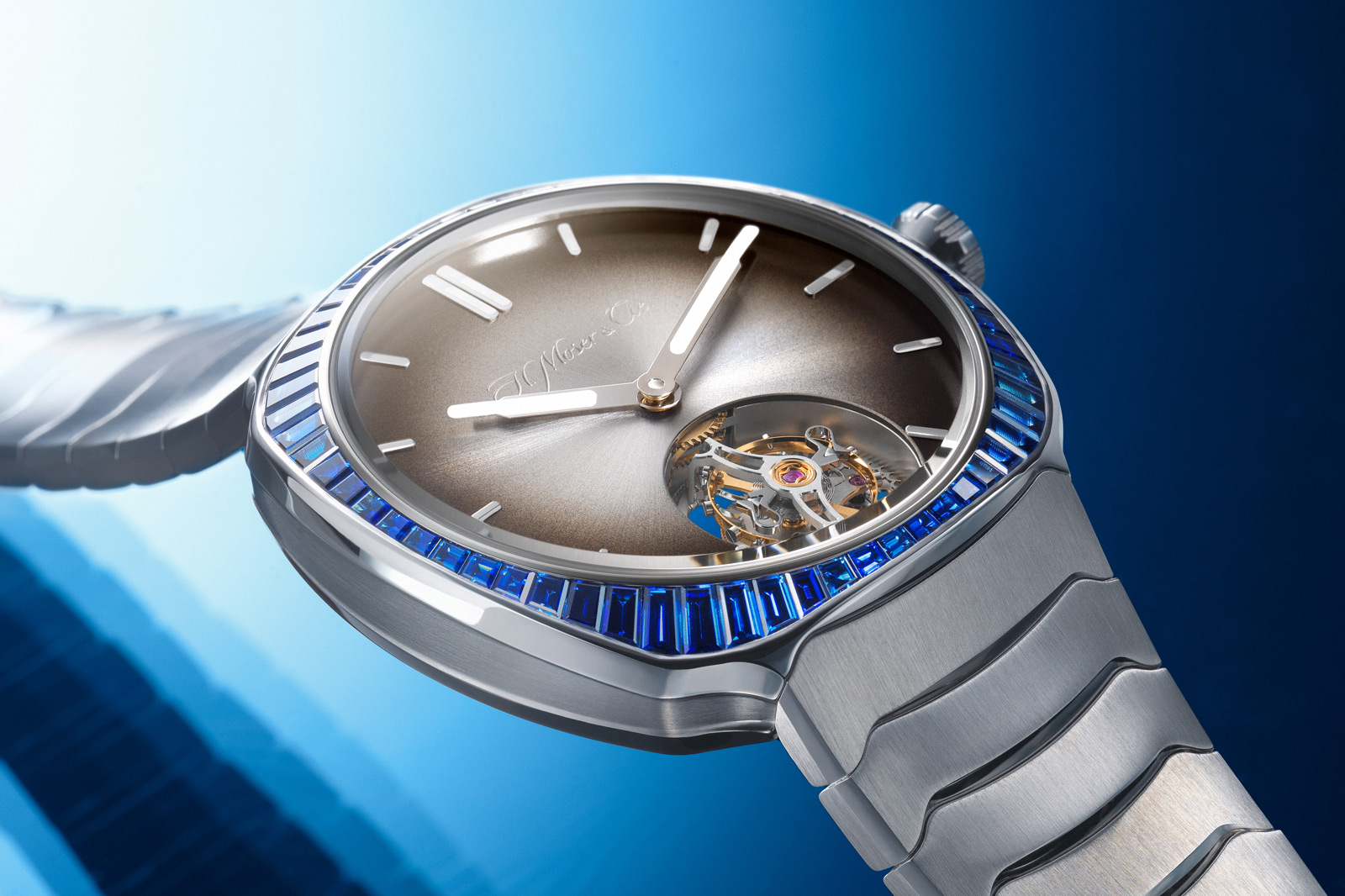 The Moser logo is printed in the same shade of grey as the dial, leaving it almost invisible

Being the corporate colour of Bucherer, blue finds its way into the retailer’s editions in a way or another. Blue dials are the most common feature across the varied Bucherer Blue models, but the Streamliner Tourbillon opts for a different approach. Its dial almost lacks colour, while the bezel is a vivid blue.

The gem-setting on the bezel is particularly impressive because of its unconventional shape. The Streamline’s bezel is neither round nor square but a complex form best described as a circle within a cushion. Its curvature changes along its circumference , which means each sapphire has to be precisely cut to fit in one particular spot. The results are impressive – exactly 60 sapphires sit seamlessly on the bezel thanks to an “invisible” or “closed” setting that hides the metal prongs typically visible in gem-set watches and jewellery. 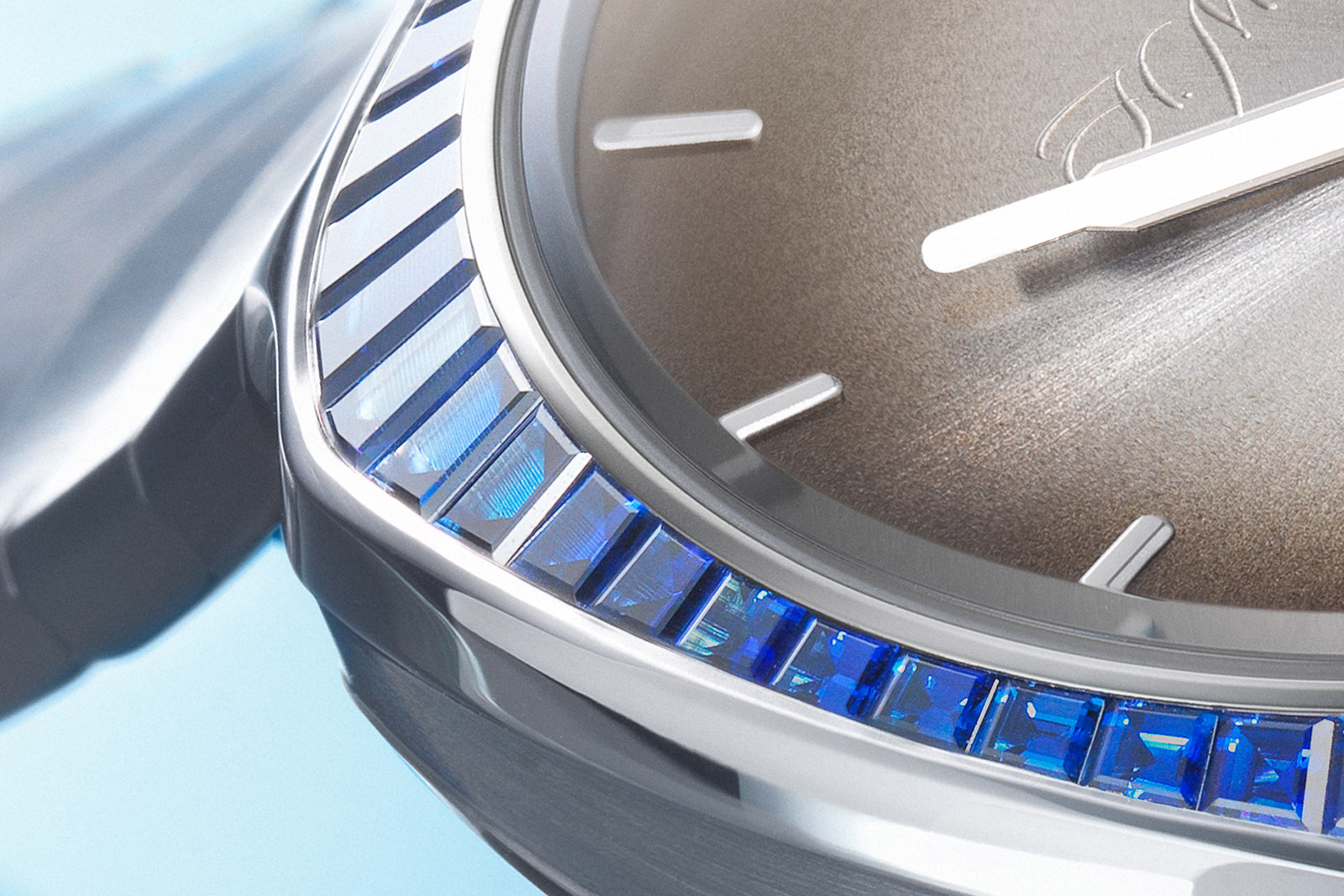 The sapphires at each of the corners sport five sides instead of four to accommodate the shape of the bezel, demonstrating the skilful cutting and setting of the stones

While the bezel is unquestionably the centrepiece of the design, the tourbillon will appeal to technically-minded collectors. Being a flying construction without bridge for its upper pivot, the tourbillon cage is entirely visible, as are the double hairsprings. 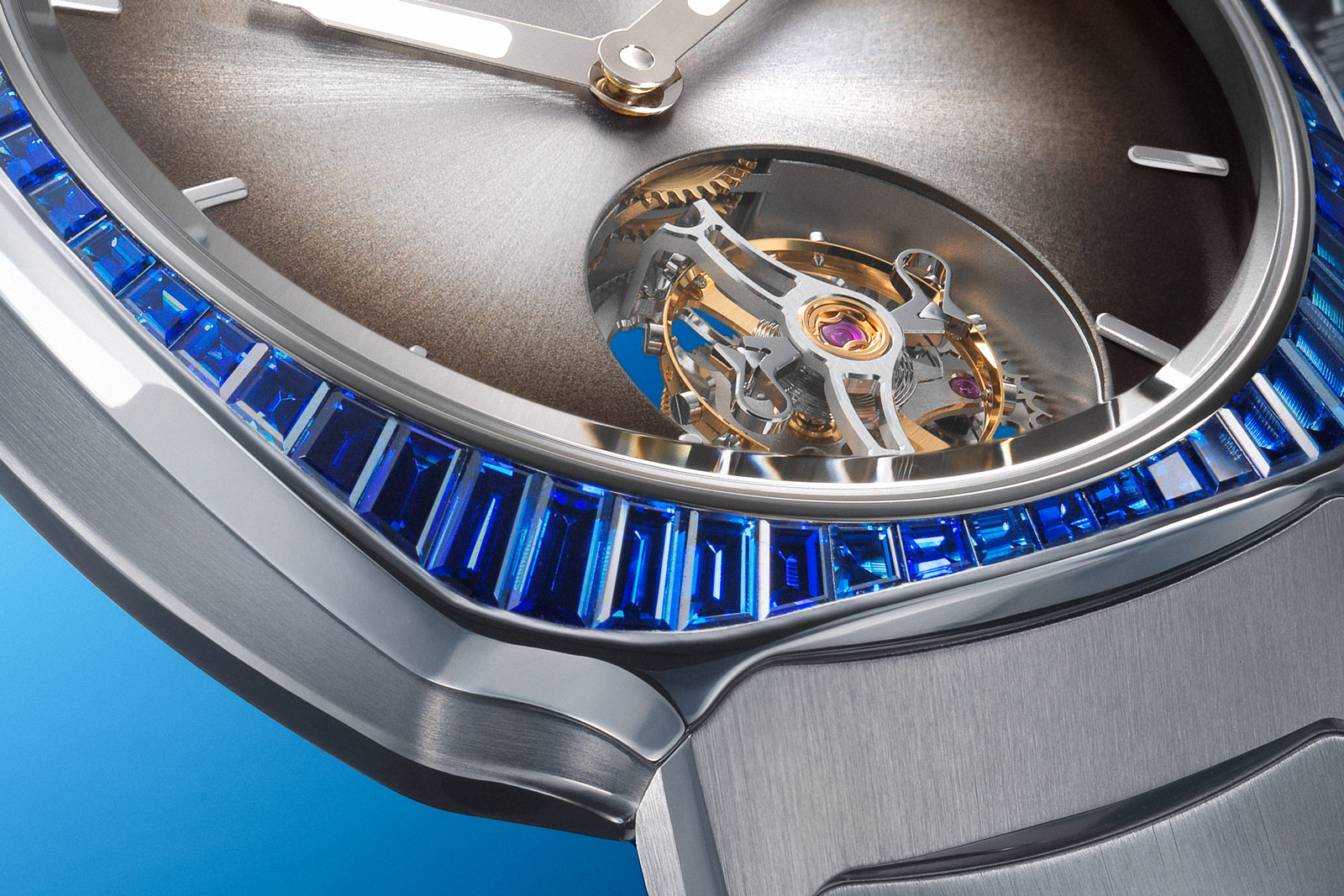 And over on the back, the movement sports a full rotor, an unusual feature for a tourbillon movement, which are typically manually wound or equipped with micro-rotors. The movement is naturally finished in the classic Moser style, which includes alternating striping on the bridges and a gold-filled engraving of the Moser coat of arms. 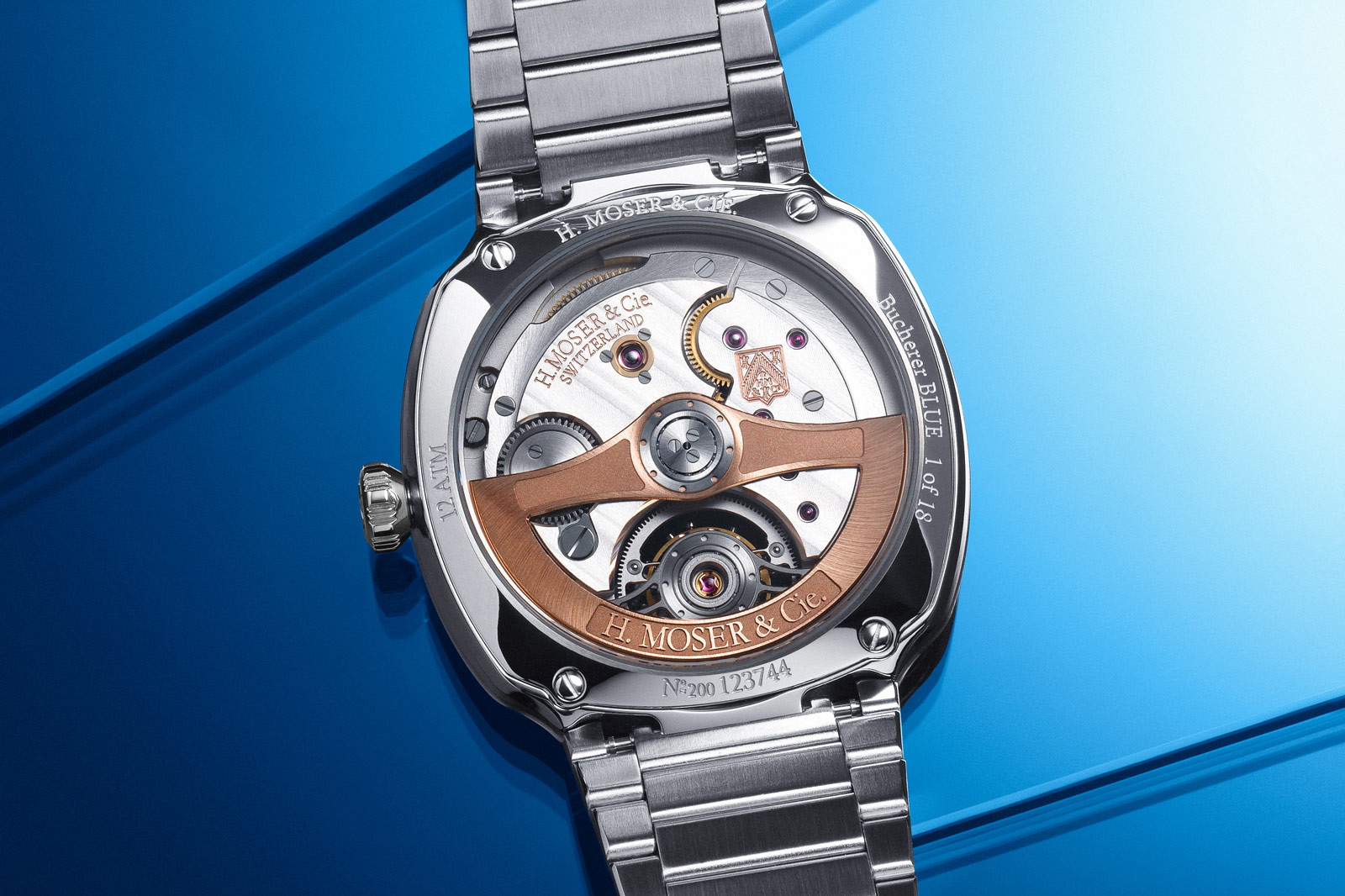 Limited edition: 18 pieces
Availability: Only at Bucherer stores
Price: US$119,900

This was brought to you in partnership with Bucherer.