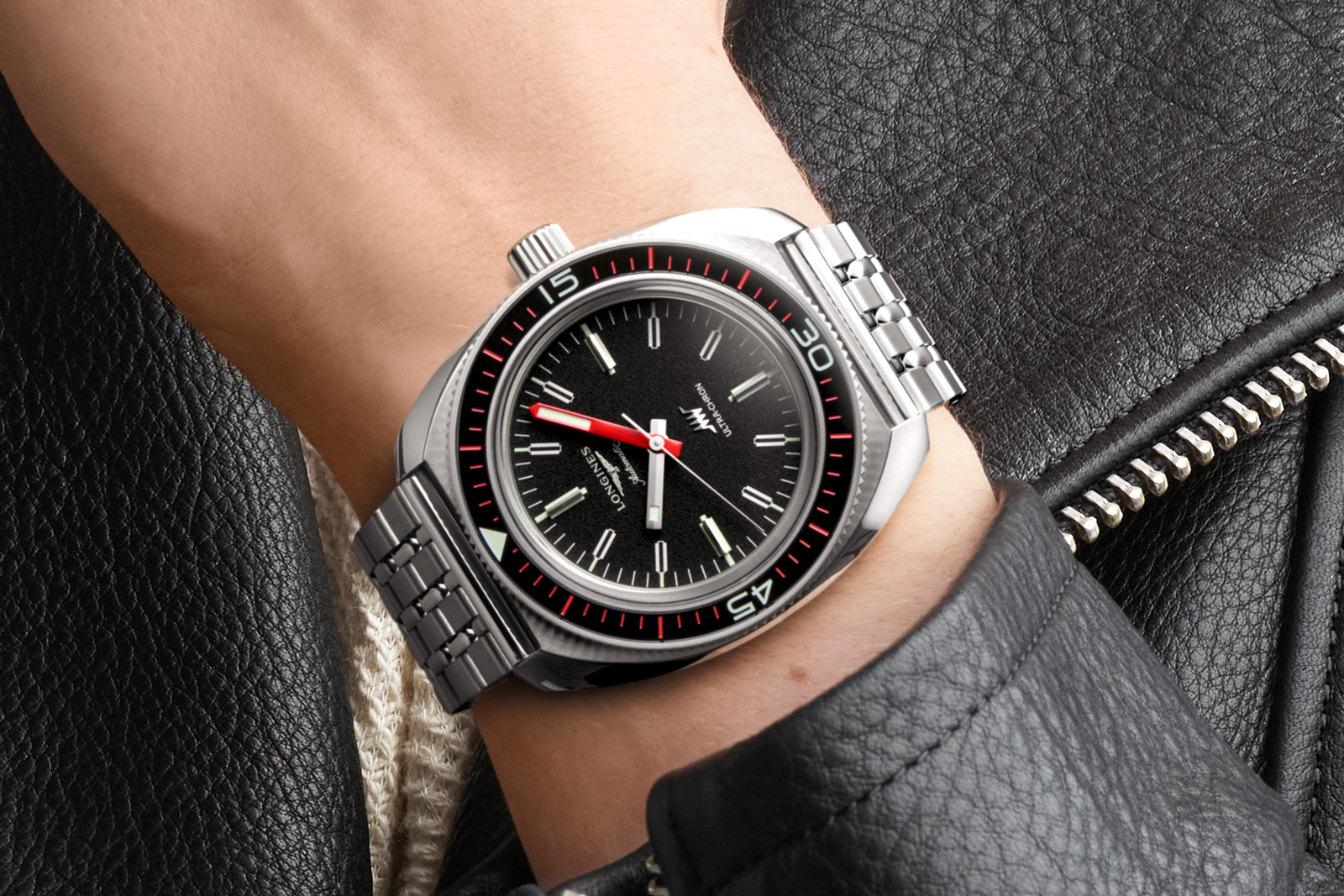 Historically a prominent participant – and winner – at observatory chronometer trials, Longines once had a stable of extra-precise, high-frequency movements, though the calibres have been long discontinued as were the chronometer competitions.

Several decades later the watchmaker from Saint Imier pays homage to that history by reviving the Ultra-Chron, which is based on its namesake 1968 original but with a newly-developed high-beat movement contained within vintage-inspired, cushion-shaped case matched with a similarly retro steel bracelet. 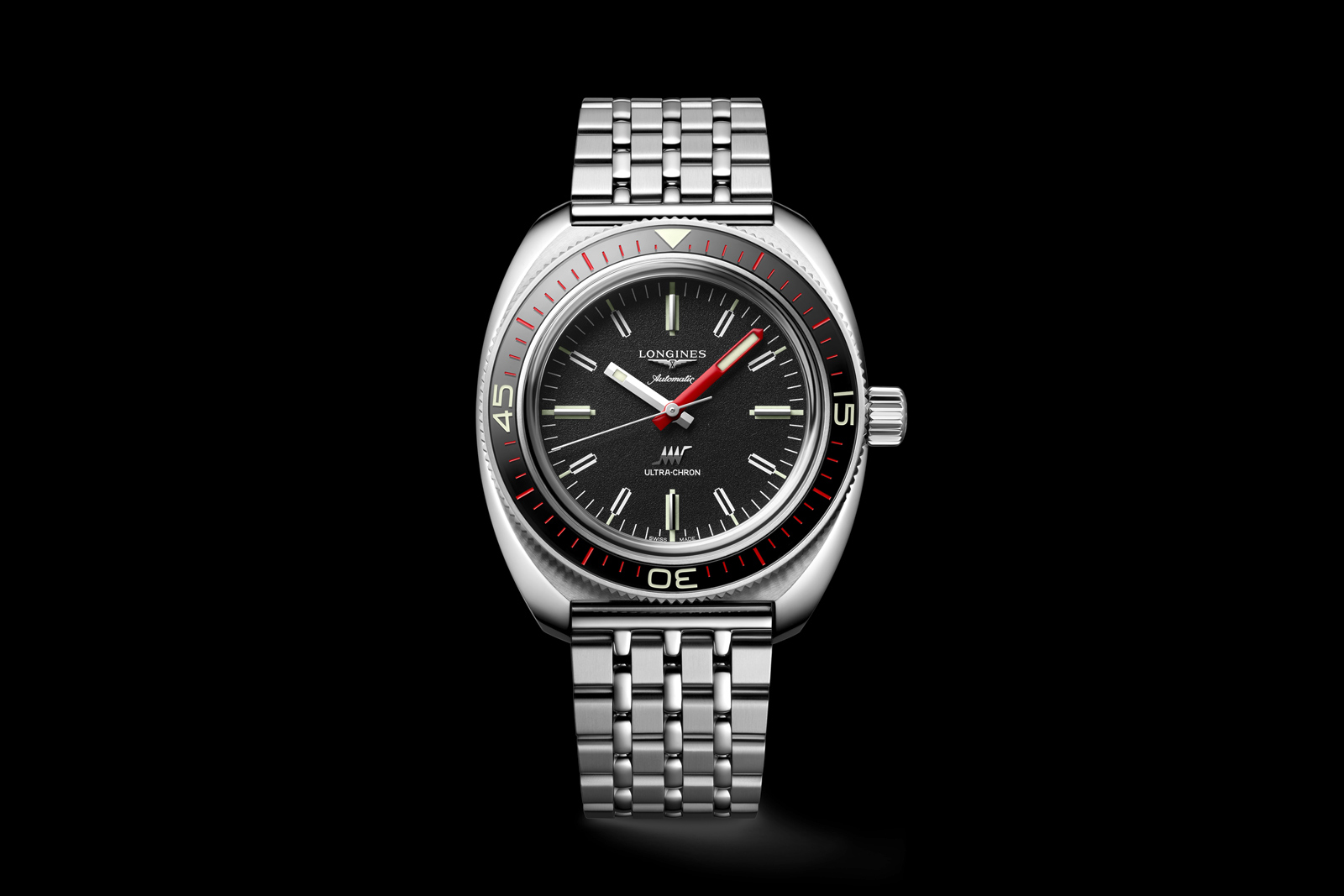 The vintage Ultra-Chron is a good basis for a remake as it avoids being yet another vintage-inspired diver with a round case. While the design isn’t new, the cushion case distinguishes it from the competition, offering enthusiasts something less common.

Personally, I like the functional, 1970s style of the Ultra-Chron; the red accents lend the watch the feel of an instrument. But going by how Longines has expanded the palette of the Legend Diver, additional, modern colours for the Ultra-Chron are a possibility (and a certainty if it sells well). 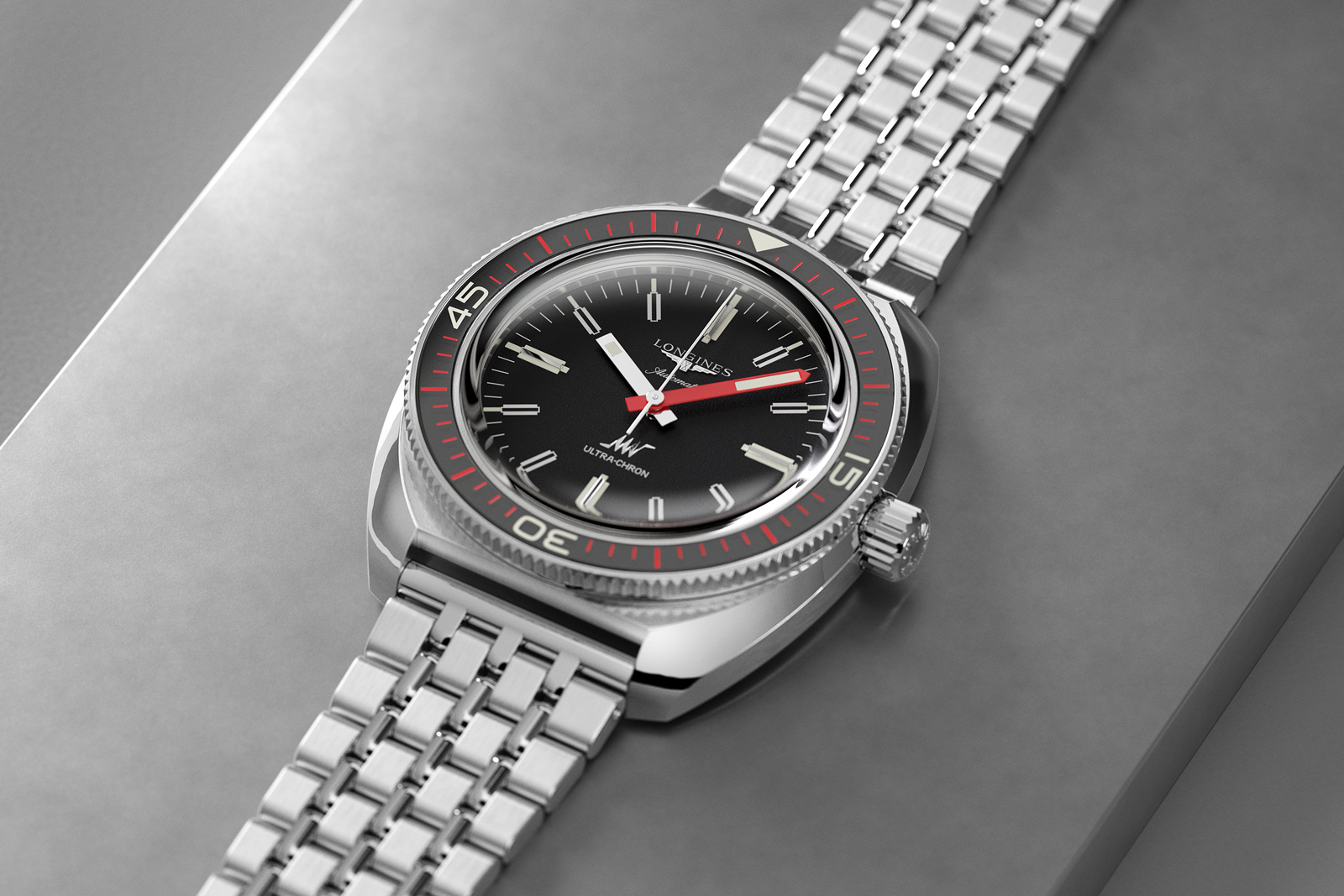 But the new Ultra-Chron is notable not just for its style. Though the Longines catalogue has an impressive tally of historical remakes, all of its Heritage models to date contain standard movements identical to those found in the brand’s other models. The Ultra-Chron, on the other hand, stands out for the high-beat calibre that was developed specially for it (though the movement will no doubt make it way into other models). Fans of the brand who appreciate the brand’s history in precision timekeeping will certainly approve.

At the same time, upgrades have been made to the external elements, such as the sapphire-covered bezel and seven-link bracelet. The Ultra-Chron demonstrates the brand’s new approach to reviving past design that goes beyond just a stylistic remake but one that incorporates something technically novel.

That said, the Ultra-Chron is priced steeply for a Longines with the model on strap costing US$3,200. That’s almost 50% more than the Longines Legend Diver and practically identical to the Tudor Black Bay Fifty-Eight. While the watch certainly has its technical merits, the value proposition isn’t as compelling as usual for Longines. 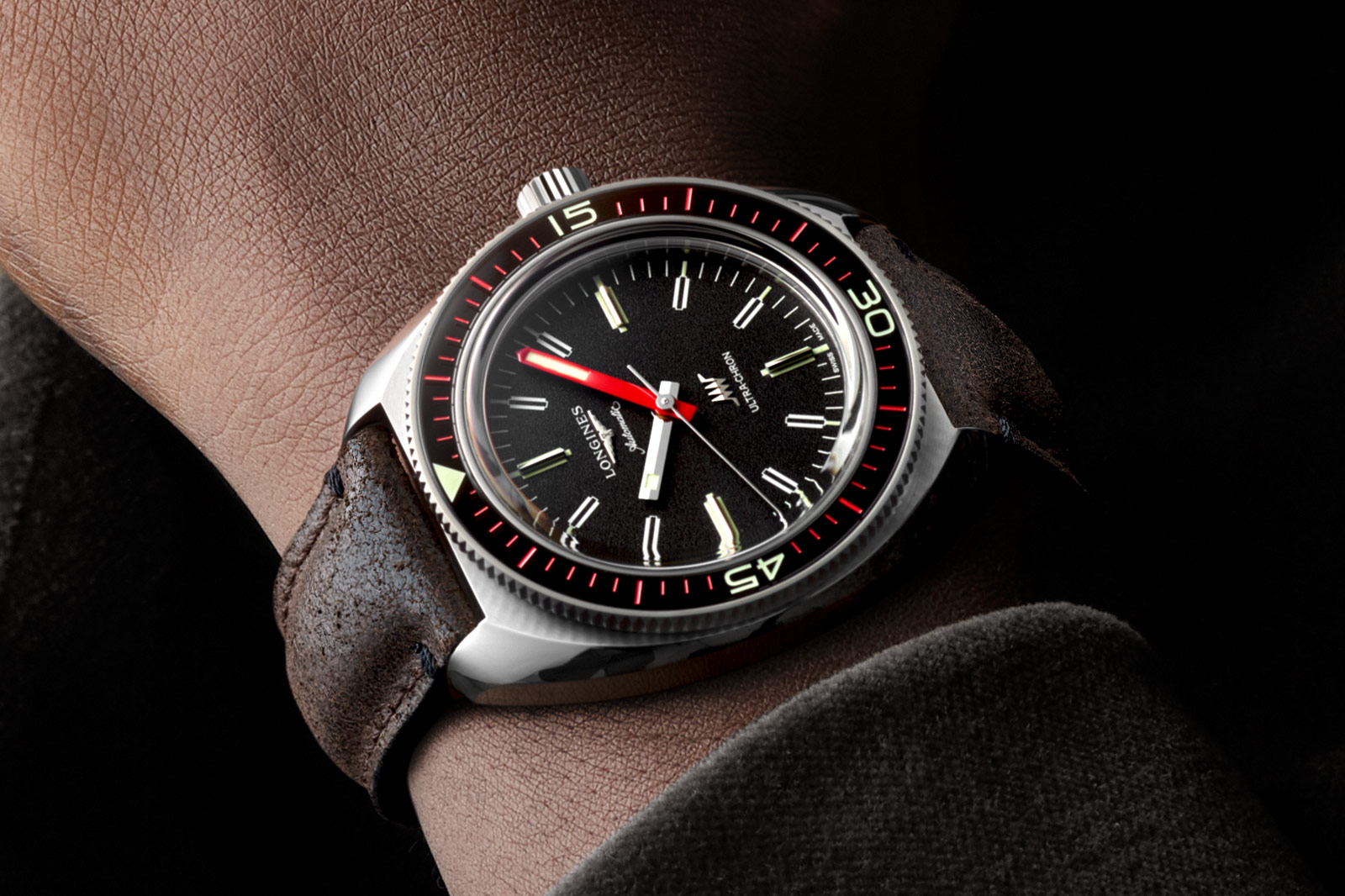 Though similar to the vintage original, the Ultra-Chron is in many ways a new design. The case, for example, has the same general form as the original but entirely different proportions and details. While the vintage original was somewhat squat and square, the remake is longer than it is wide, giving it a more streamlined, cushion-like form.

The details have been similarly refined. The polished bevel between the top and flanks of the case is steeper and rounder. Overall the case appears to be better finished than the vintage original.

The dial also gets a new treatment with a grained finish, while the bezel recedes a sapphire insert with engraved, lacquer-filled markings, a feature that brings to mind retro dive watches from one of Longines’ sister brands within the Swatch group. 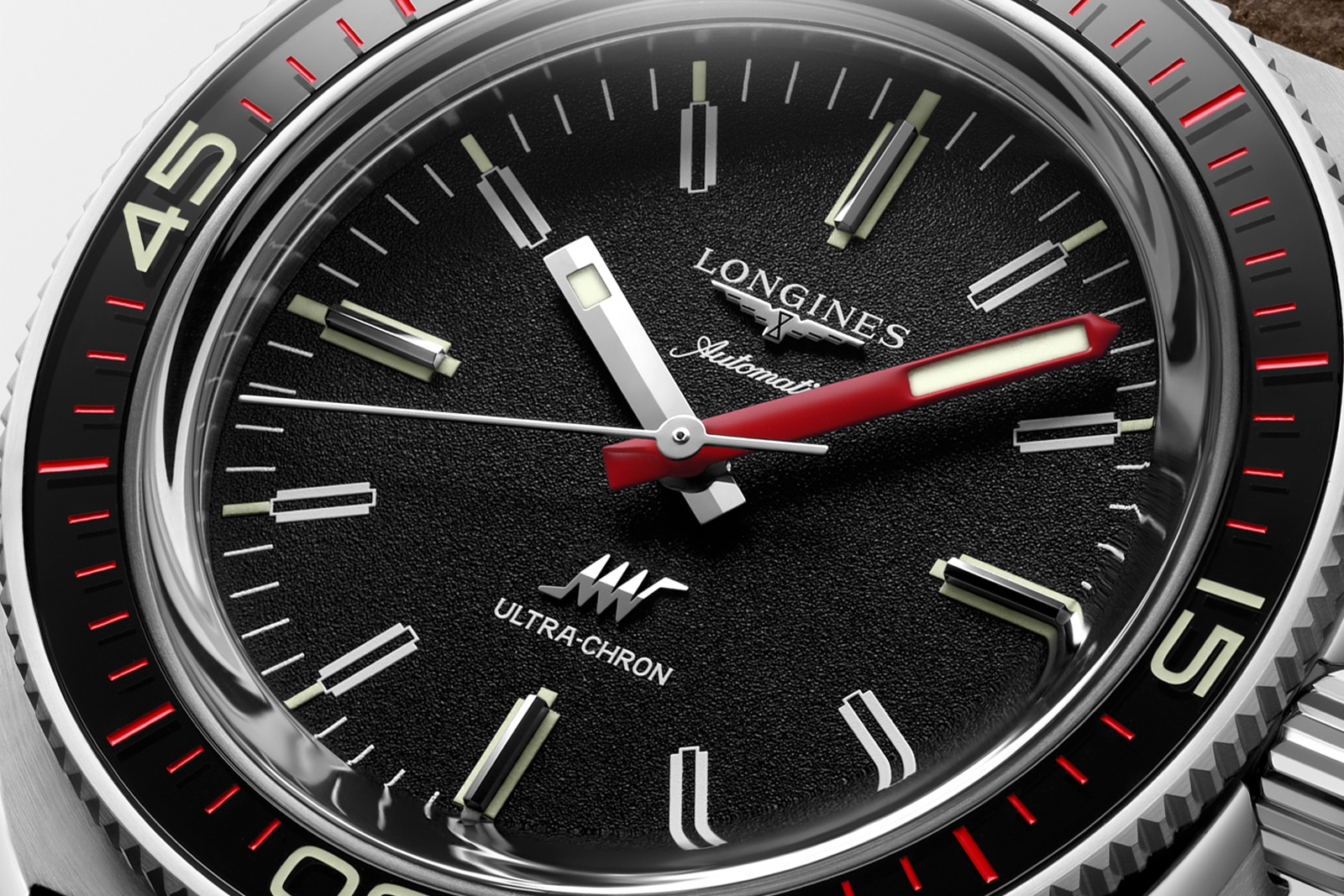 The emblems on the dial, hour markers, and hands are faithful to the original, preserving the 1970s look

But the highlight is the bracelet that is vintage-inspired but not a copy of the one found on the original, which gives it more character. It’s composed of a mix of brushed blocks and smaller, polished beads. Matched with its straight end links, the bracelet has a just-right retro feel that suits the utilitarian look of the watch. 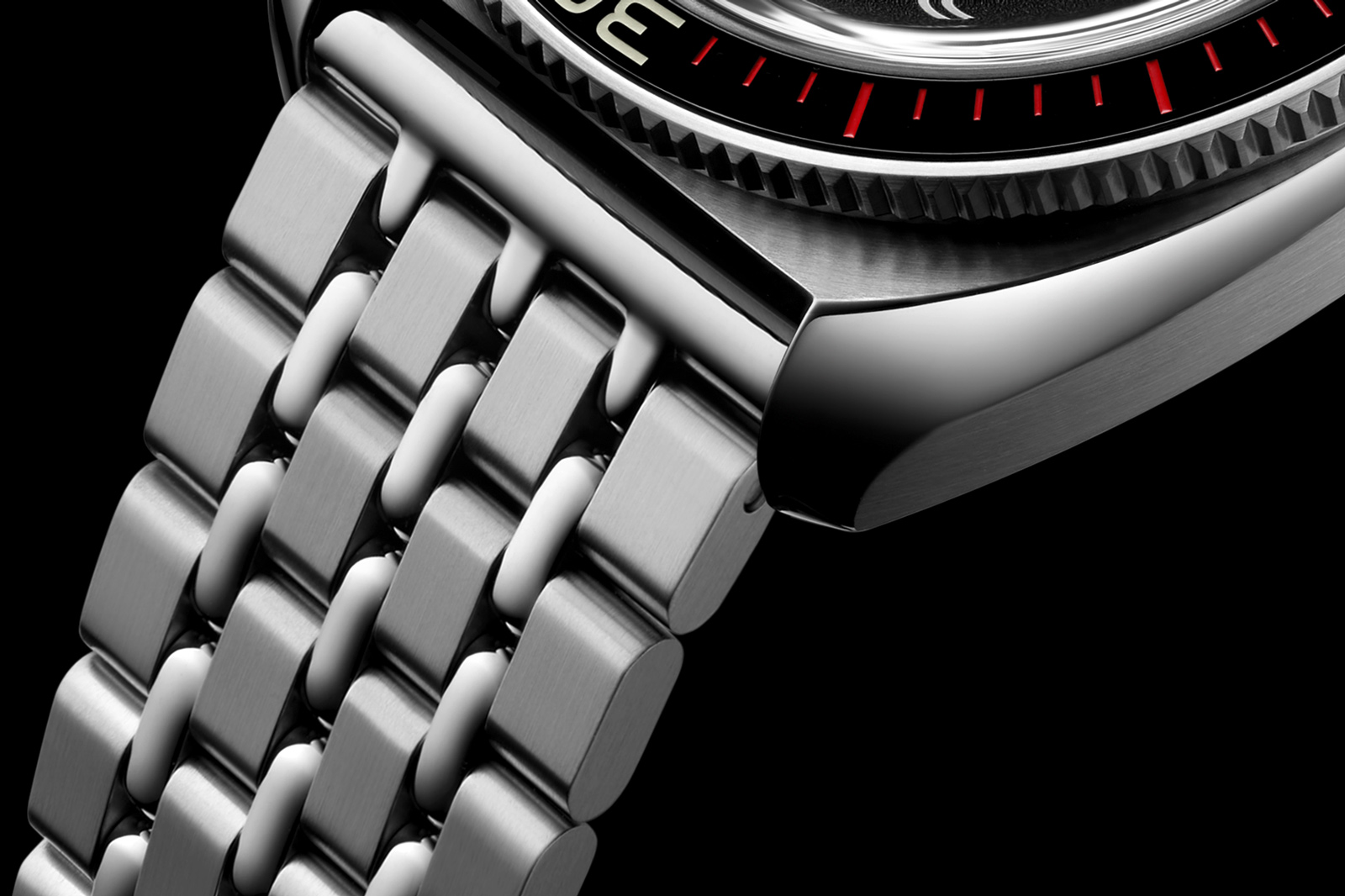 Inside the watch is the all-new L836 that beats at 36,000 vibrations per hour. It has a power reserve of 52 hours and of course a silicon hairspring that’s now the norm for Longines’ high-end calibres. Though it was developed by ETA exclusively for Longines, it is possible that related movements find their way into other brands owned by the Swatch Group, a logical development given the group’s emphasis on industrial-scale manufacturing.

Its high-beat nature is a nod to the original Ultra-Chron movements, namely the cal. 430 and cal. 431, which were introduced in 1967 to celebrate the brand’s 100th anniversary. Those calibres were designed for the mass market; they were not high-end chronometers but nonetheless equipped with the features of observatory chronometer movements, namely the high-frequency escapement.

The modern-day Ultra-Chron and its L836 goes a step further – each example tested as a complete watch and certified to be an Ultra-Chronometer. It’s a new chronometer standard developed by Timelab, the Geneva-based institute better known for administering the Poinçon de Genève (or Geneva Seal).

That said, the Ultra-Chronometer timekeeping benchmarks are based on the ISO 3159, which is also used by chronometer-testing giant COSC. It dictates a maximum daily deviation of -4 to +6 seconds. In contrast, the vintage Ultra-Chron with its cal. 431 was guaranteed to keep time to an impressive a minute per month, an average deviation of just two seconds a day. 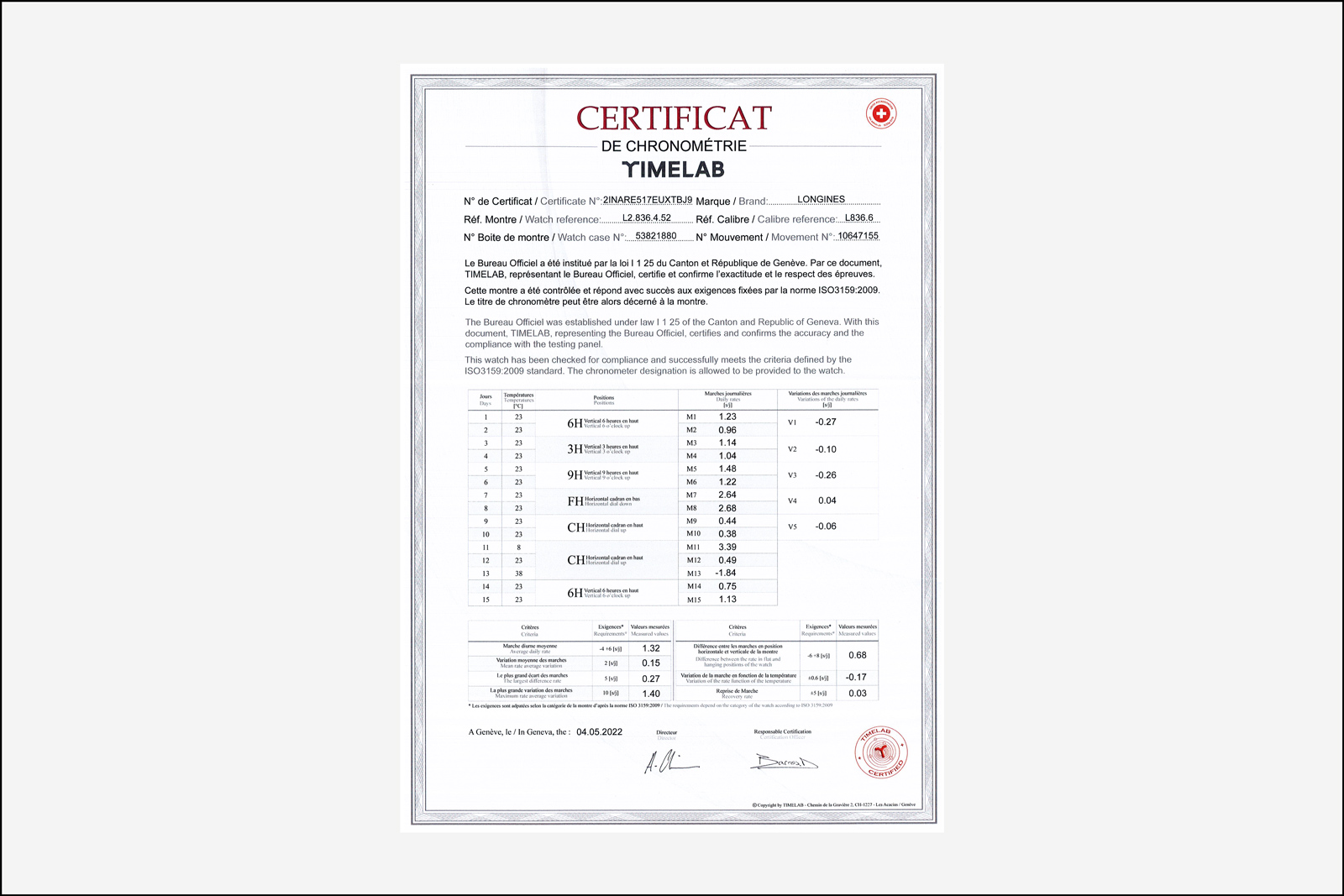 The Ultra-Chronometer certificate issued by Timelab, this one for an Ultra-Chron that boasts impressive mean daily deviation of just 1.32 seconds