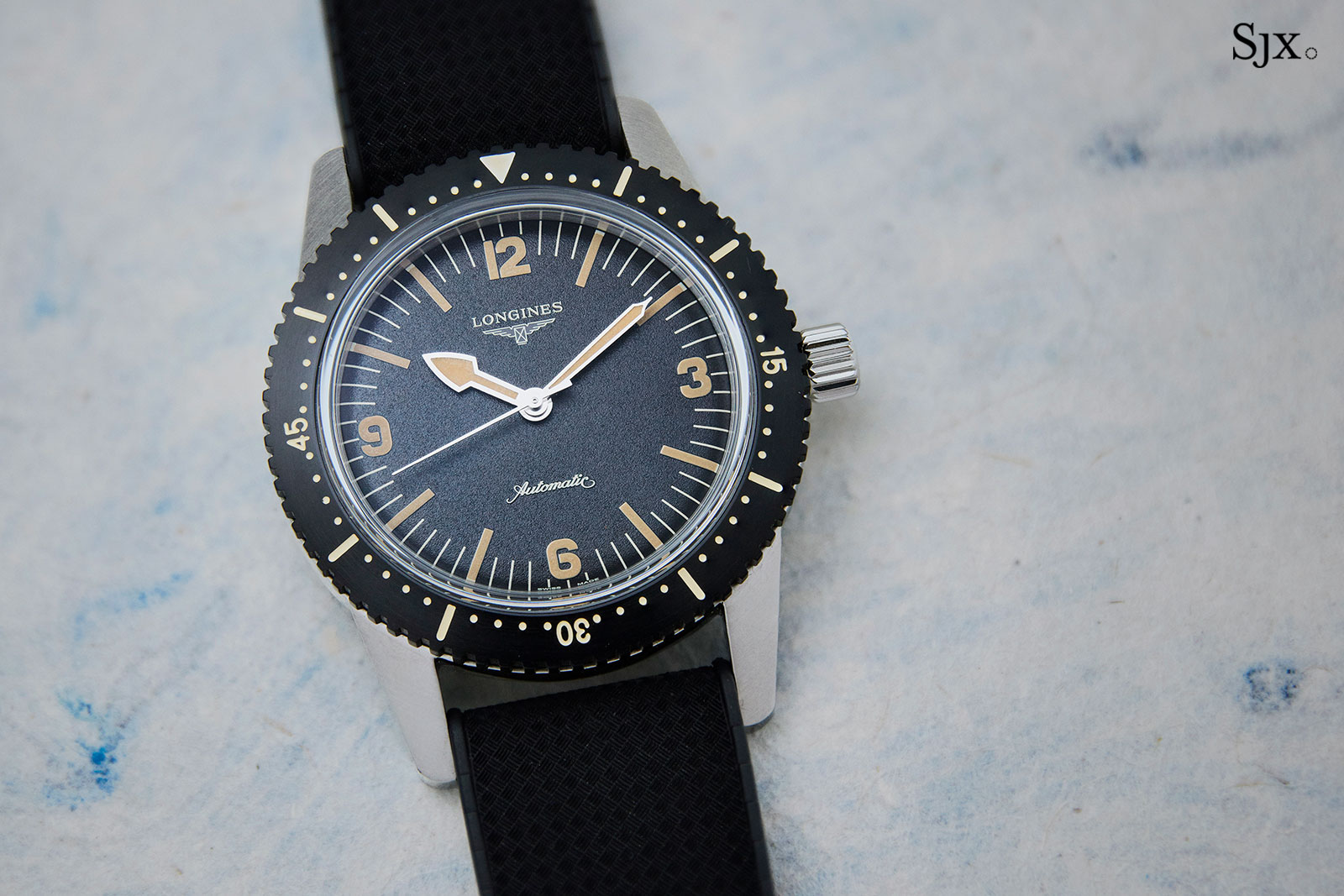 Backed by an impressively diverse history, Longines was one of the first movers in the vintage-remake wave, most prominently with the bestselling Legend Diver that was introduced in 2007. Dozens of models based on historical timepieces have joined the line-up since then, most recently the Aviation BigEye. But the latest circles back to the 1950s and early 1960s, a formative period for dive watches.

The Heritage Skin Diver is a hotly anticipated remake (because it was already unofficially shown at Baselworld in March) of Longines’ first ever dive watch, the “Nautilus” Skin Divers’ Watch T910 ref. 6921 of 1959. It was produced for only a few years before being succeeded by the ref. 7042, a dual-crown “Super Compressor” dive watch that’s the basis for the modern day Legend Diver. The Heritage Skin Diver is a compelling remake of the original, but naturally, it incorporates a few concessions to modernity. To start with, the watch is 42mm in diameter, 2mm larger than the original (which must have been a gargantuan watch in the late 1950s), though it retains the same case shape.

Even though the Skin Diver shares the same diameter as the Legend Diver, it sits much bigger on the wrist due to the black bezel, and more crucially, the wide and long trapezoidal lugs that extend almost 10mm from the case. As a result the Skin Diver lacks the tangible vintage vibe that Longines’ other, smaller remakes have. The case is most likely stamped and finished simply, with brushed top surfaces and polished sides.

Size aside, the vintage look is spot-on. The case is topped by a domed sapphire crystal that mimics the look of the acrylic crystal on the original, while being scratch-resistant.

Similarly faithful to the original is the grained black dial – probably the strongest single element of the watch – completed with faux-aged lume. The fragile Bakelite bezel of the original is another element that has been upgraded. Now substantially more robust, the bezel is now black-coated steel, and also made more functional, being unidirectional as is standard for modern dive watches. The bezel markings remain true to the original, featuring off-white batons and numerals in engraved recesses filled with white paint. But the triangle at 12 o’clock, the most crucial indication on a bottom timer, is coated with Super-Luminova and glows in the dark. One crown or two

Unlike the twin-crown “Super Compressor” diver that had a second crown to operate an inner rotating bezel, the original Skin Diver was a single crown “Compressor” fitted with a more common outer bezel.

This presented the obvious downside that an accidental knock to the bezel could turn it, altering the recorded bottom time. Thus, Longines eventually switched to the internal bezel and twin-crown case, just as found in today’s Legend Diver. An original Skin Diver sold by Phillips in 2017 But both styles of vintage dive watches had cases made by the same company, the now defunct E. Piquerez SA (EPSA), which had patented a type of case featuring gaskets that were compressed with depth, sealing the case tighter as external water pressure increased – explaining the “Compressor” moniker.

Such EPSA cases were distinguished by a crosshatch pattern on the crown, a detail Longines has been careful to preserve with the Skin Diver remake. And naturally the movement inside is 21st century. It’s the cal. L888.2, a movement built exclusively for Longines by ETA and found in several other Longines remakes, including the no-nonsense RailRoad. The movement is hidden behind a solid case back bearing a stamped skin diver motif, just as on the original.

And it is available with either a strap in black “tropic” style rubber or brown leather, or a “Milanese” mesh bracelet – all of which cost the same.