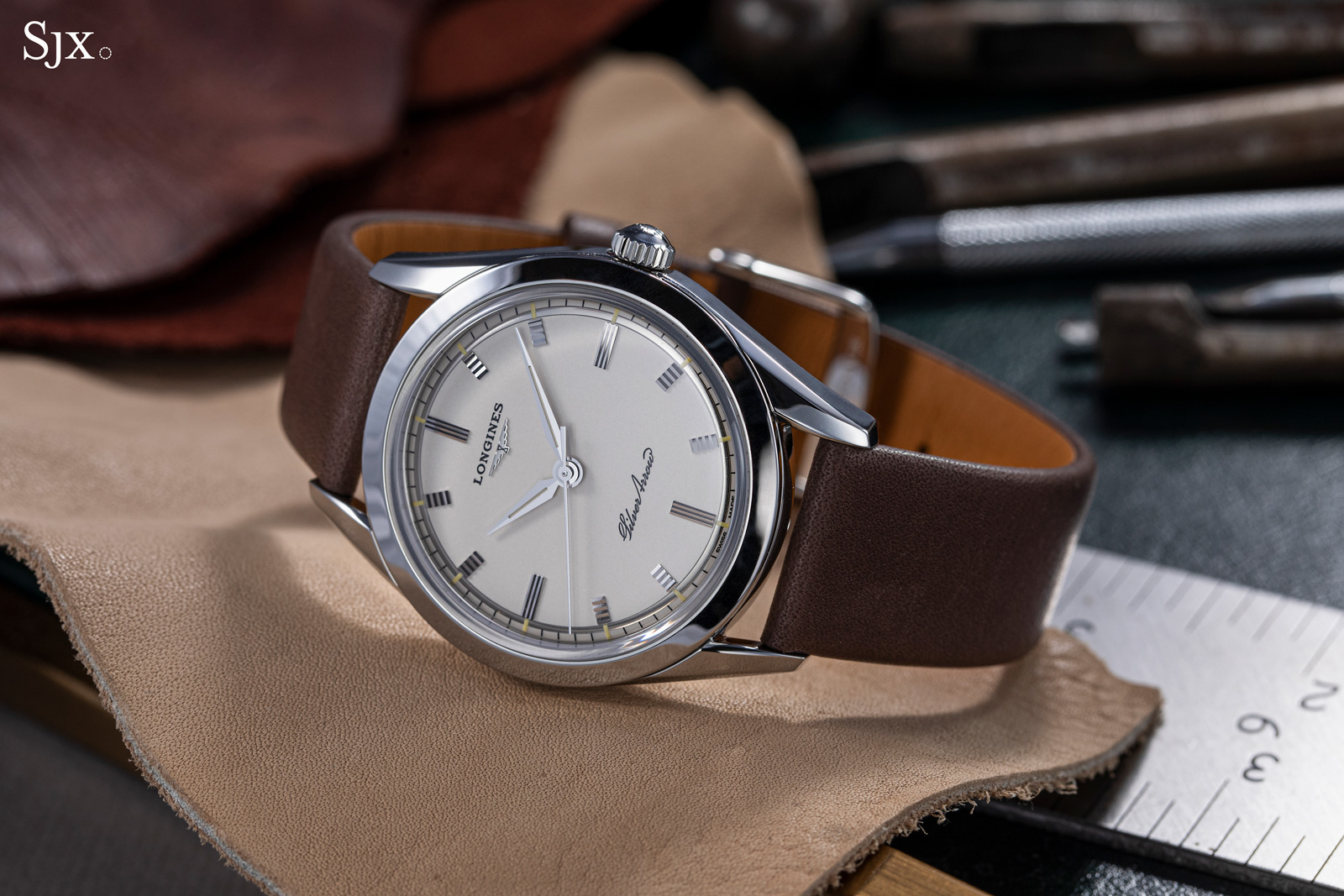 One of several historical reissues Longines launched this year, the Heritage Silver Arrow is modelled on a wristwatch produced for a brief period starting in 1955. Named after the aluminium-bodied Mercedes race cars of the period, the watch was sleek, simple, and accented with details in the metalwork, something that the remake captures well.

It’s becoming a cliche, but Longines does vintage remakes well and also does a lot of them. The designers at Longines are well versed with remakes, and they have clearly gotten better with time.

The Silver Arrow still manages to outdo its peers in many ways, because it manages to get practically everything right. Longines’ remakes are uniformly good, but to varying degrees, and the Silver Arrow is one of the best. 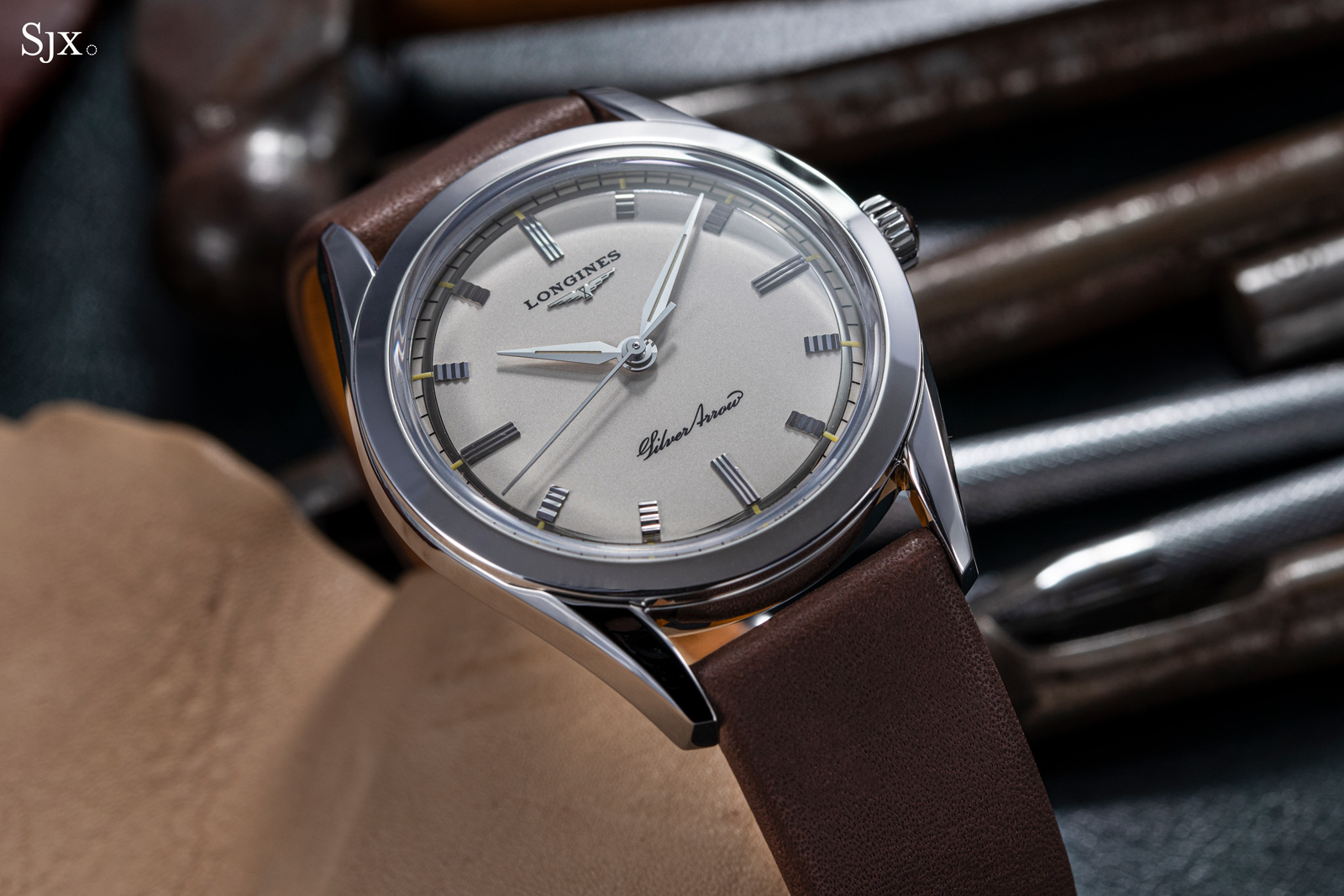 That’s helped by the fact that the vintage original is a straightforward watch, with only a few key elements that define the watch. Longines got all that right: the details are reasonably correct and well executed, the quality of finish is good, and the watch is a good size that evokes the feeling of the vintage original.

Like all vintage remakes, the Silver Arrow is neither creative nor imaginative, but it is a handsome watch that is strong value for money. And that’s enough to make this a compelling choice for someone looking for a time-only watch in the US$2,000 segment. 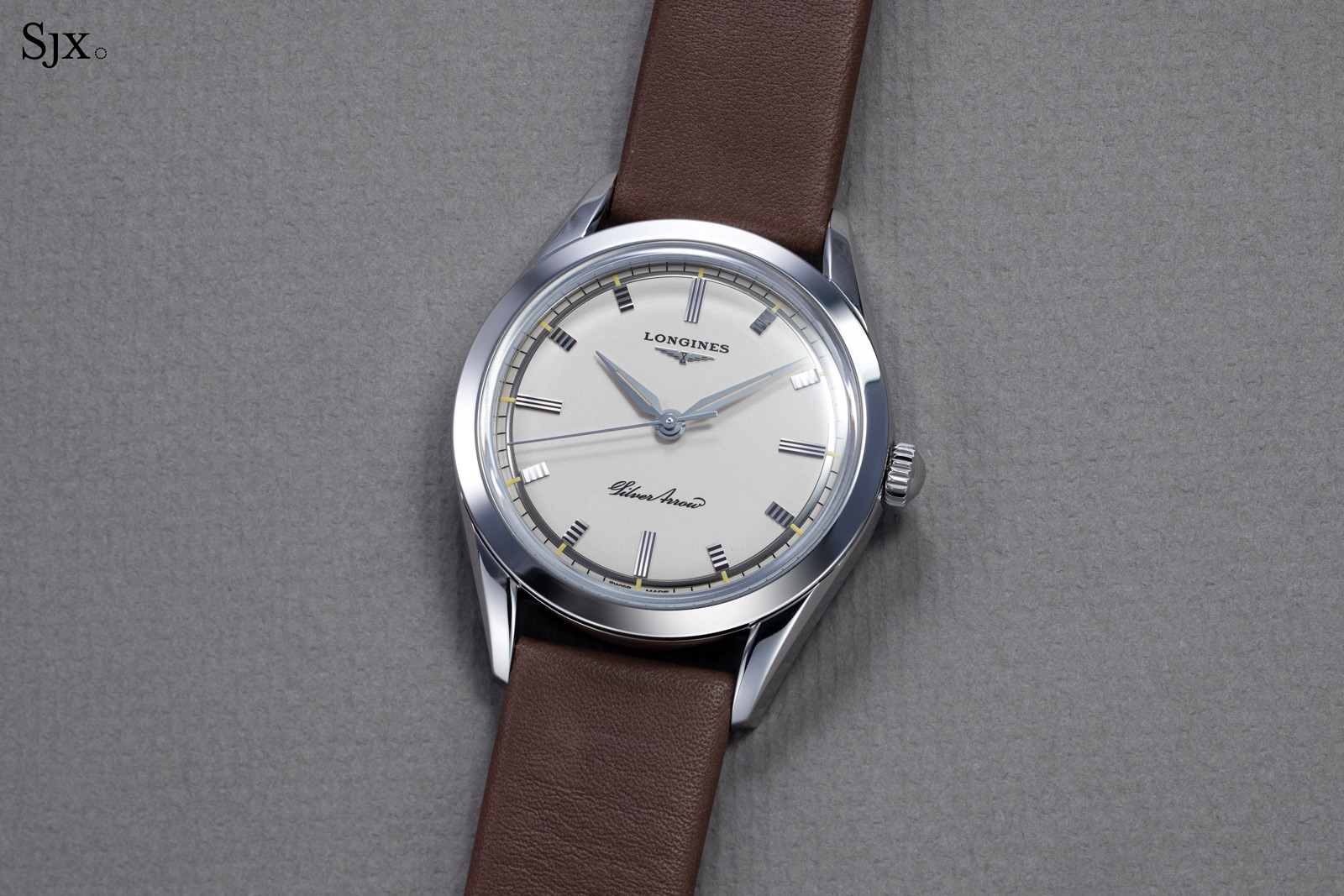 The best feature of the Silver Arrow is the dial. At a distance it’s seemingly plain – ivory, finely grained, and matched with dauphine hands. But the markers are polished and fluted, allowing them to catch the light. Also found on the vintage original, the fluted indices make the dial.

As on the original, the dial is also slightly domed, putting the hour markers at a slight incline. And because the dial is under a domed sapphire crystal, the watch pulls off the vintage look convincingly. 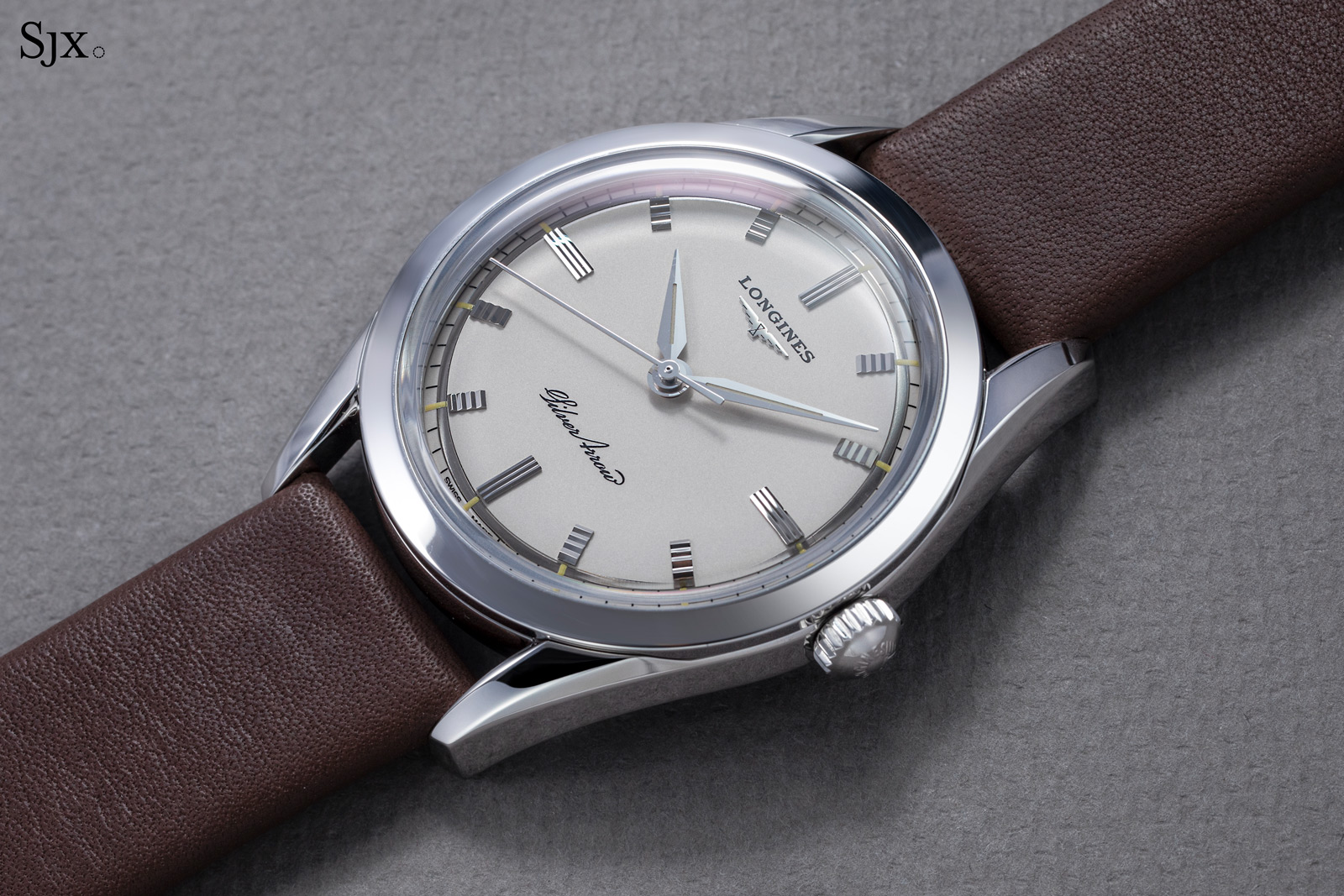 Like the hour markers, the markings on the dial stick closely to the vintage original. A period Longines logo sits at 12 o’clock, while the model name is rendered in italic script. Both are printed thickly, giving the lettering a heavier weight than on the original. It’s just how modern printing is done, but it does take away from the vintage feel in a subtle way.

The Super-Luminova on the dial is slightly yellow to mimic aged radium, which is an affectation that the watch can do without. However, there isn’t much on the dial, which largely makes the lume a moot point. 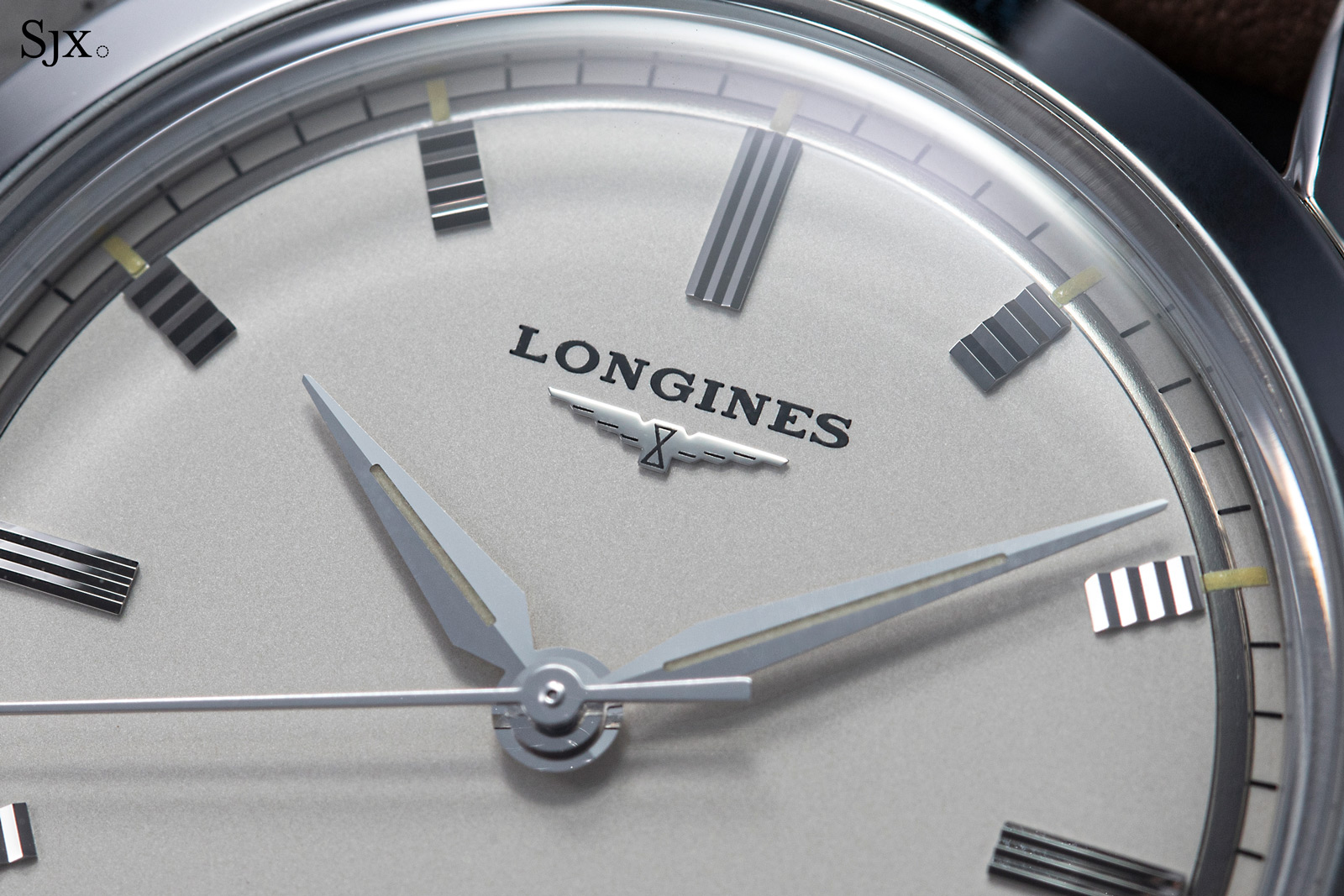 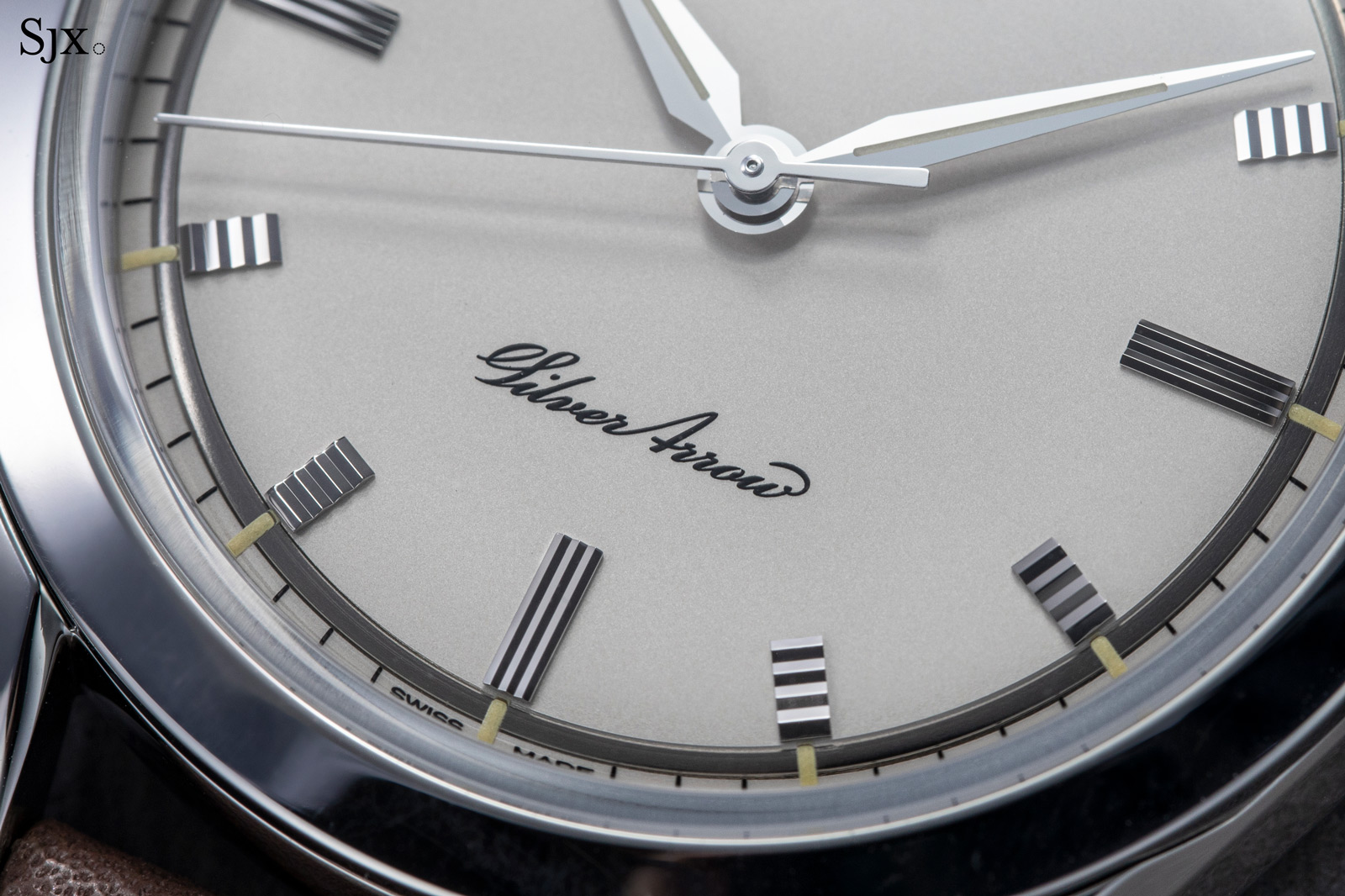 The case is 38.5 mm wide and 9.9 mm high – quite a lot bigger than the original, but still smaller than the average modern watch, which helps its vintage feel.

Like the dial, the case is defined by a handful of details. Perhaps the best example of how the remake has been smartly redesigned are the lugs. They are similar to the original, but scaled up to suit the wider and thicker case. But they are done well enough the original’s look is preserved.

The lugs are fairly flat and gently curve towards the strap, while also having a faint bevel on their inner edges, with a wider, more obvious bevel on the outer edge. As a result, the lugs are elegant, unlike some Longines remakes that reproduce the look of the original but feel too chunky. 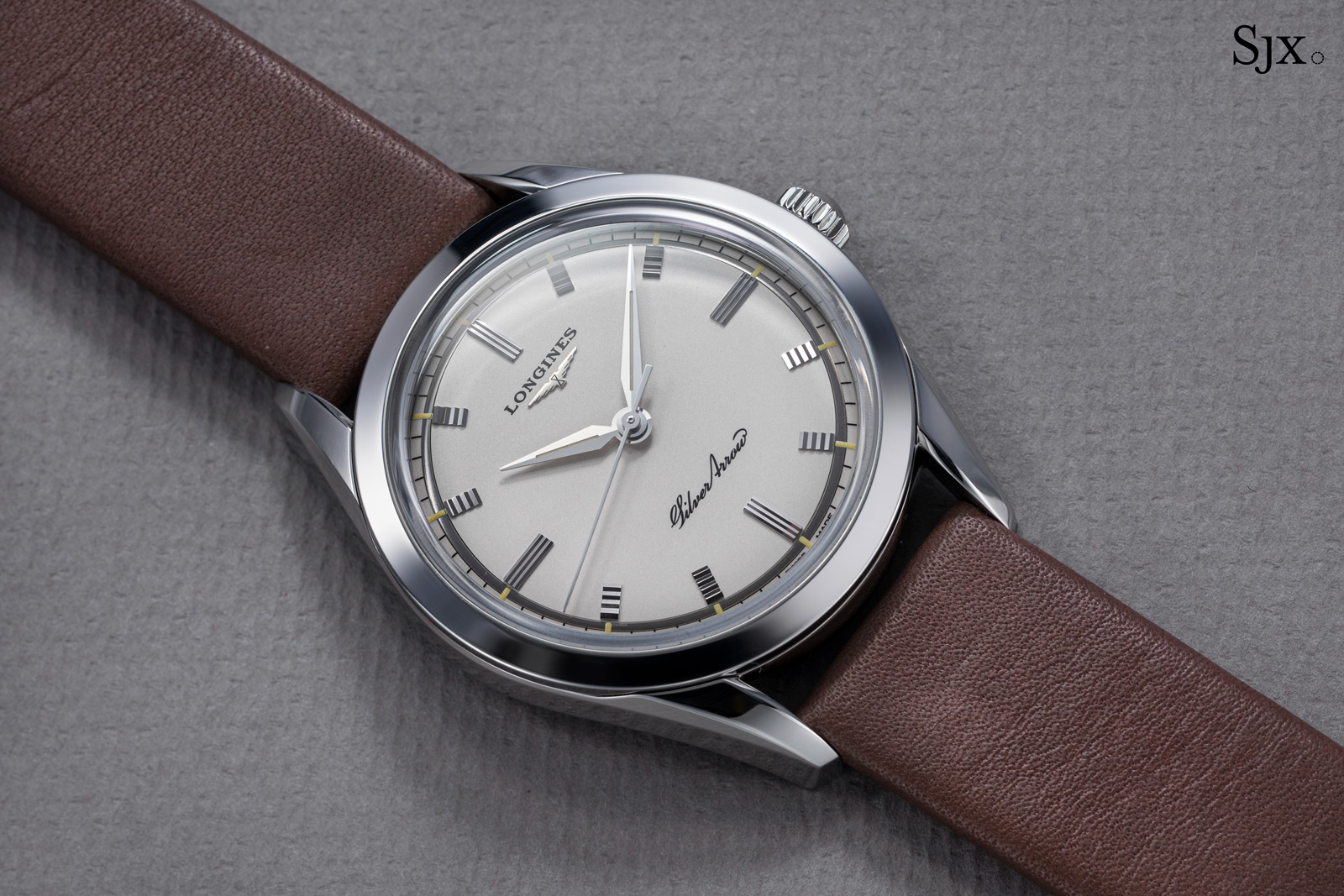 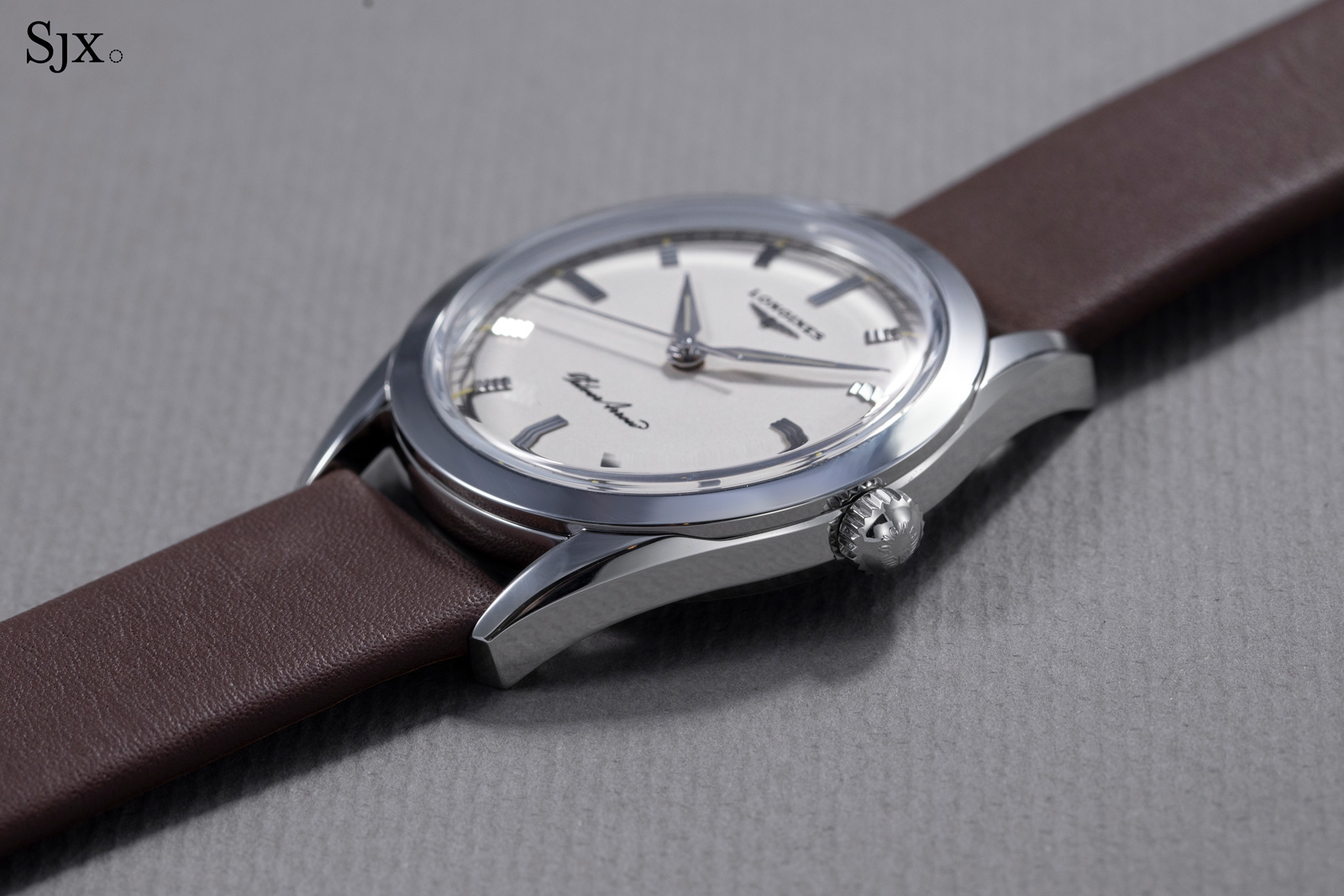 At 9.9 mm high, the Silver Arrow is surprisingly thin, with the case construction making it seem even slimmer than it is. The bezel is slightly recessed into the lugs, while the back is slightly domed. Add to that the narrow case back, and the watch sits elegant and flat on the wrist. 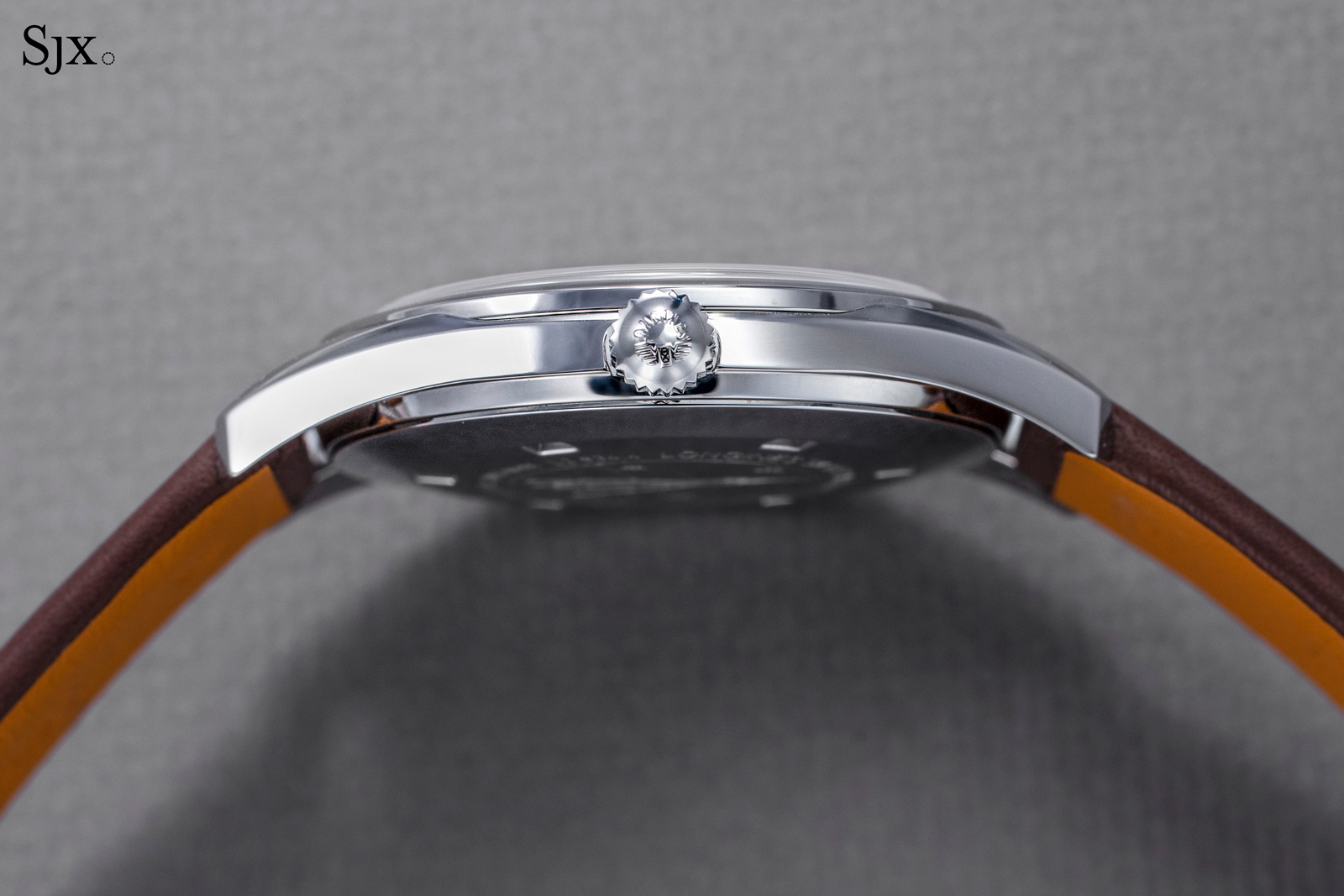 The domed crown is another element that reproduces the original

As with recent Longines remakes, the movement inside is a latest-generation ETA calibre made exclusively for Longines. It’s an L888.5, which is essentially an ETA 2892 that’s been upgraded substantially.

And because it has a silicon hairspring, the watch has a five-year warranty, instead of the usual two. It is difficult to imagine a movement like this suffering from any sort of mechanical failure – it’ll most likely keep good time well beyond the five years – but the warranty is still a nice bonus. 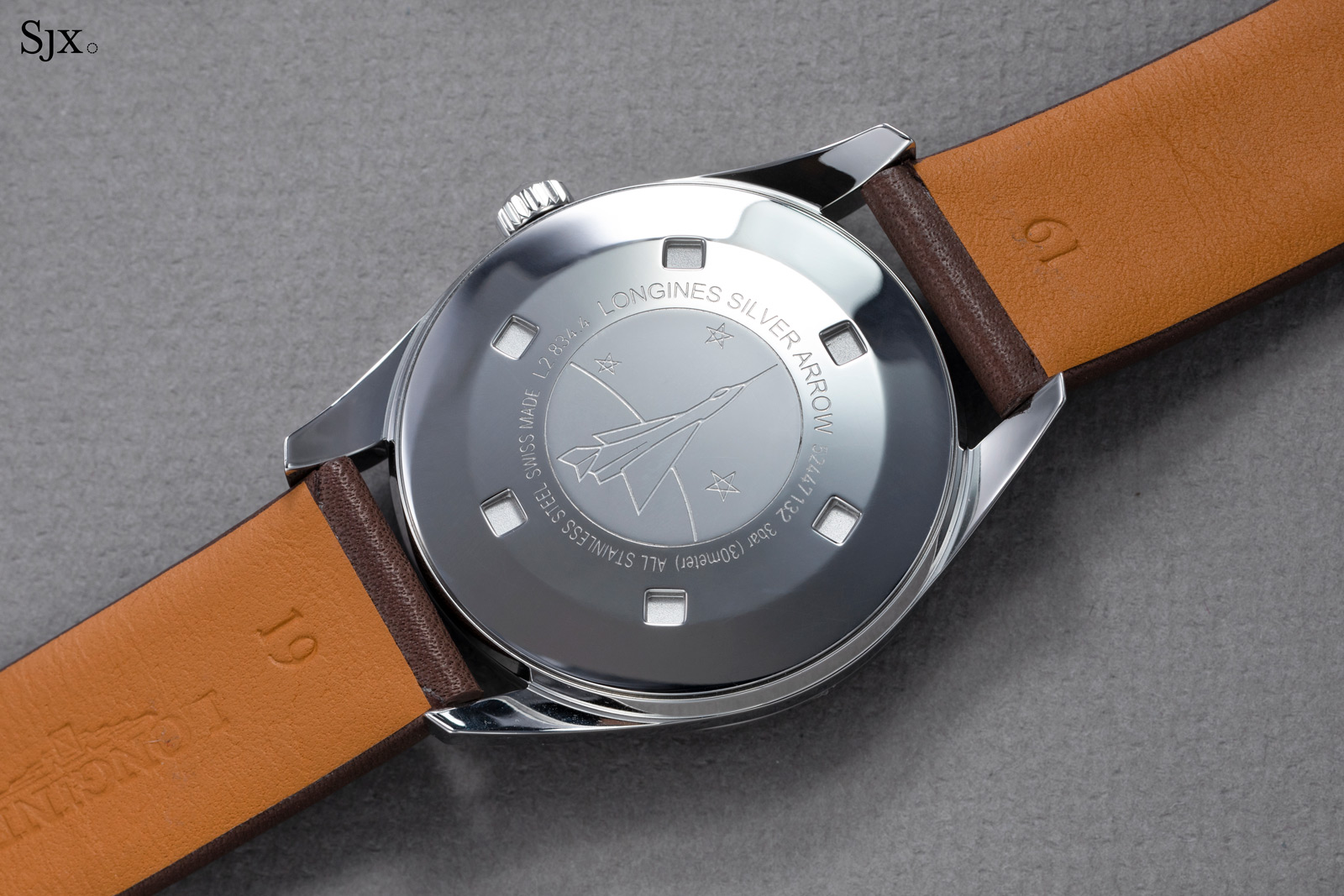 The Silver Arrow doesn’t try to do too much, and focuses on recreating the look and feel of the original. It’s been carefully designed to convey the spirit of the original, avoiding pitfalls like too-thick lugs, which indicates the designers know what they are doing. The only bit that isn’t very good is the strap, but that’s easy to fix. In short, it’s a good watch that’s excellent value.

Correction May 4, 2021: The vintage Silver Arrow did not have a date, and only the first remake did.