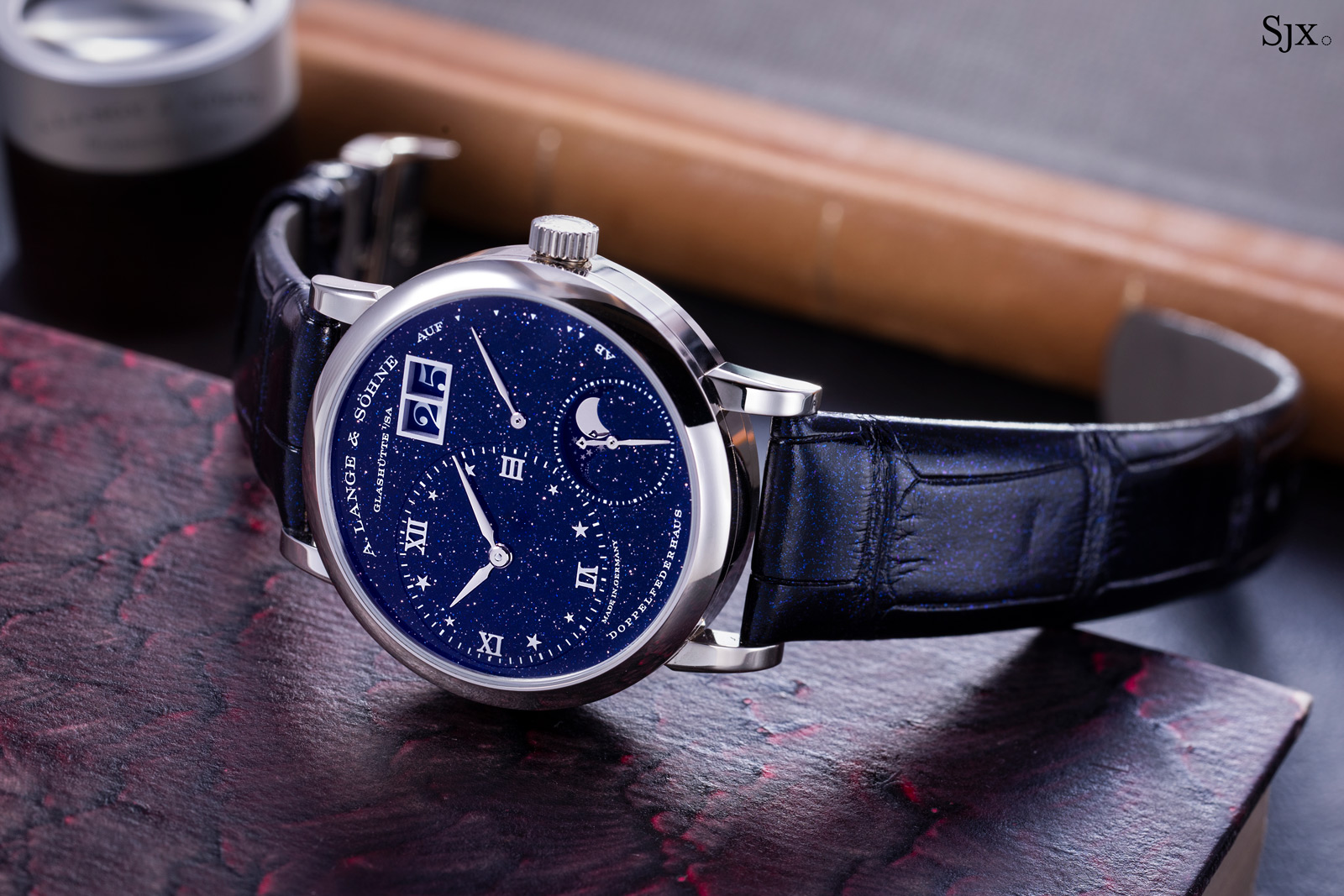 Launched in 2021, the Little Lange 1 Moon Phase was one of the simpler models in last year’s lineup but easily appealing. It is the first Lange 1 to have a dial made of aventurine glass, or “gold flux” as Lange labels it, a material rarely found on the brand’s watches but always popular when it makes an appearance.

Conceived as a mens’ watch in 1998 – the average dress watch was still about 35 mm then – the Little Lange 1 has since evolved into a feminine watch. It’s basically the Lange 1 for ladies and the base model for a variety of female watches, often in pastel colours accented with mother-of-pearl or diamonds.

The new Little Lange 1 continues the theme with its sparkly dial, but it stands apart from recent models in several ways; it feels different, perhaps even masculine. We take a close look at the Little Lange 1 to weight its appeal. 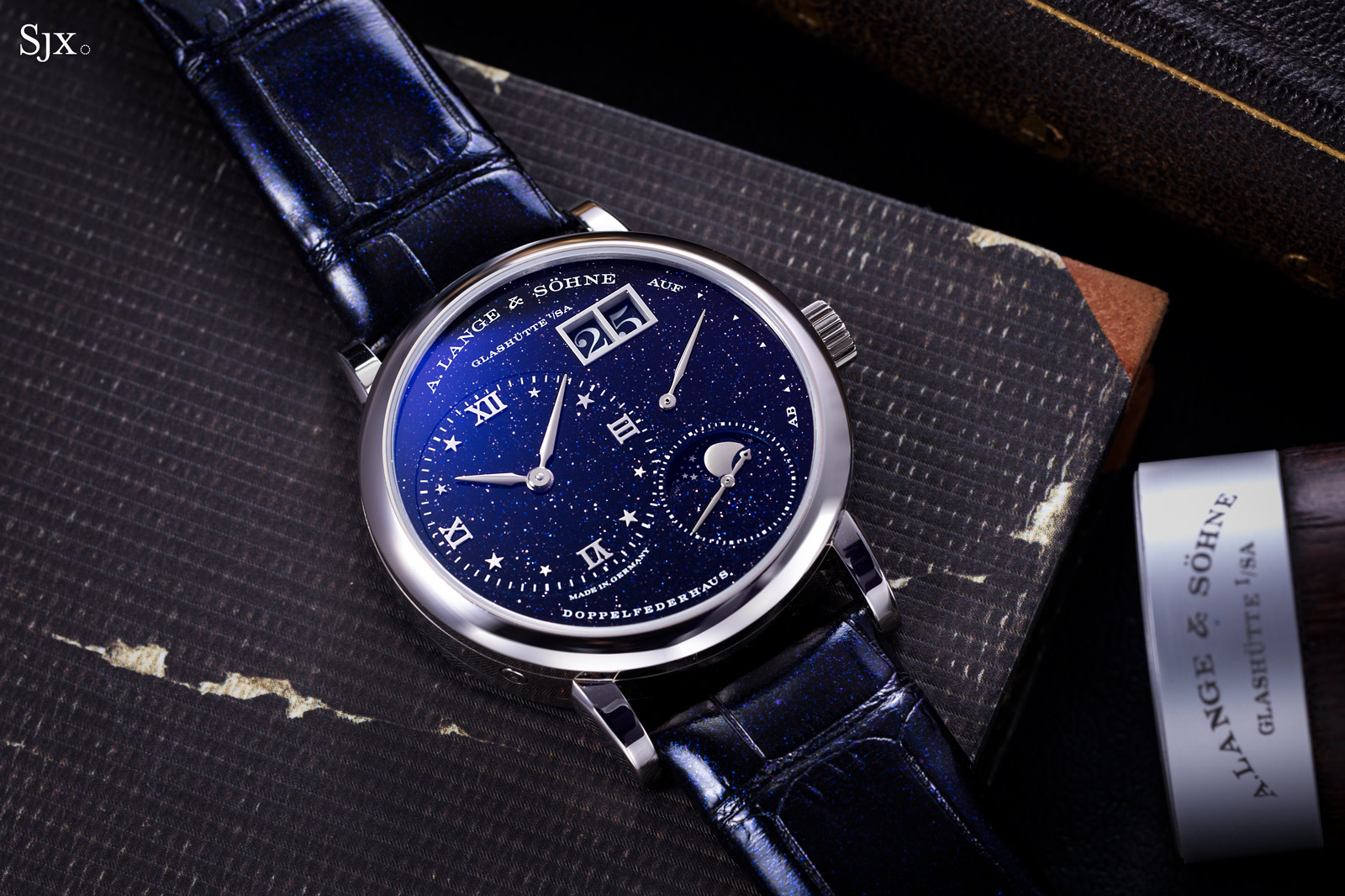 Thanks to off-centred yet logical displays, the Lange 1 is one of the most distinctive offerings from the German watchmaker. And the starry, aventurine glass dial, along with the moon phase, create a charming, slightly whimsical appeal that isn’t present on the standard models, which are formal and serious looking.

Despite the shimmering, reflective dial, the new model is understated on the wrist, thanks to its dark colours and white metal case. These tone down the sparkle of the dial, which comes from the metallic inclusions in the glass.

More appealing but equally understated are the star-shaped hour markers in alternating size, which might go unnoticed at first glance. They are a first for a Lange 1 and instantly differentiate this from the standard models with lozenge-shaped markers. The star markers are certainly more charming and arguably more notable than the dial material itself, which is also found on other models like the Saxonia Thin. 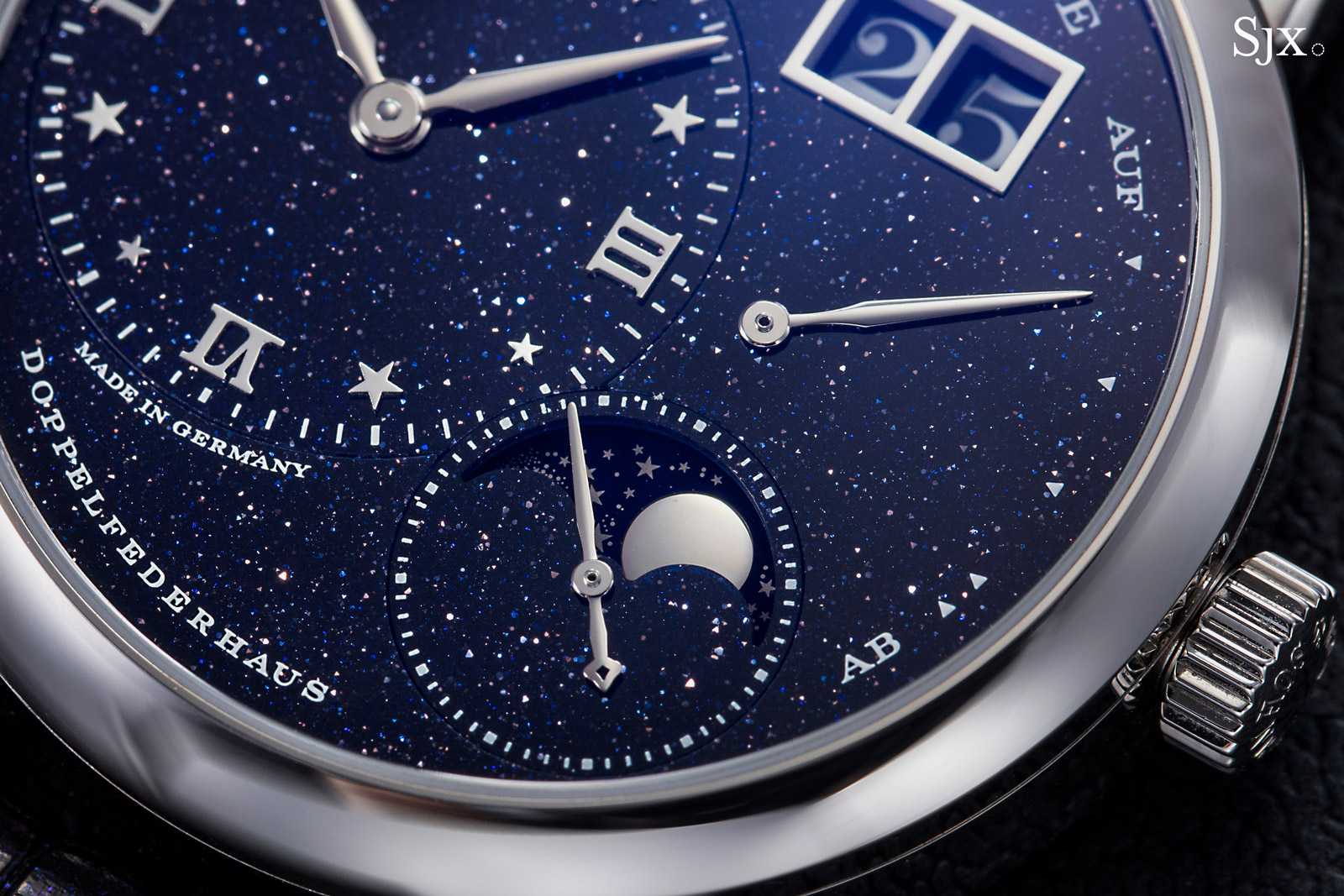 More than the dial, the new Little Lange 1 is interesting because it is a versatile watch for both genders, despite the fact that model is conventionally a ladies’ watch today. Of the nine Little Lange 1 models in the current catalogue, six are ladies’ watches.

It is a pretty watch, but one that both men and women can wear. In fact, this is a watch I would happily wear. The only thing I would change about the watch is the strap. It’s a seamless strap with a glossy, pearlescent finish that is too feminine for a mens’ watch.

The Little Lange 1 has a modest size of 36.8 mm. It wears small on the wrist, which is good news for collectors who fancy smaller watches. It lacks the majesty of Lange’s big, complicated watches, but that’s exactly what the Little Lange 1 should be – very much a Lange but different. 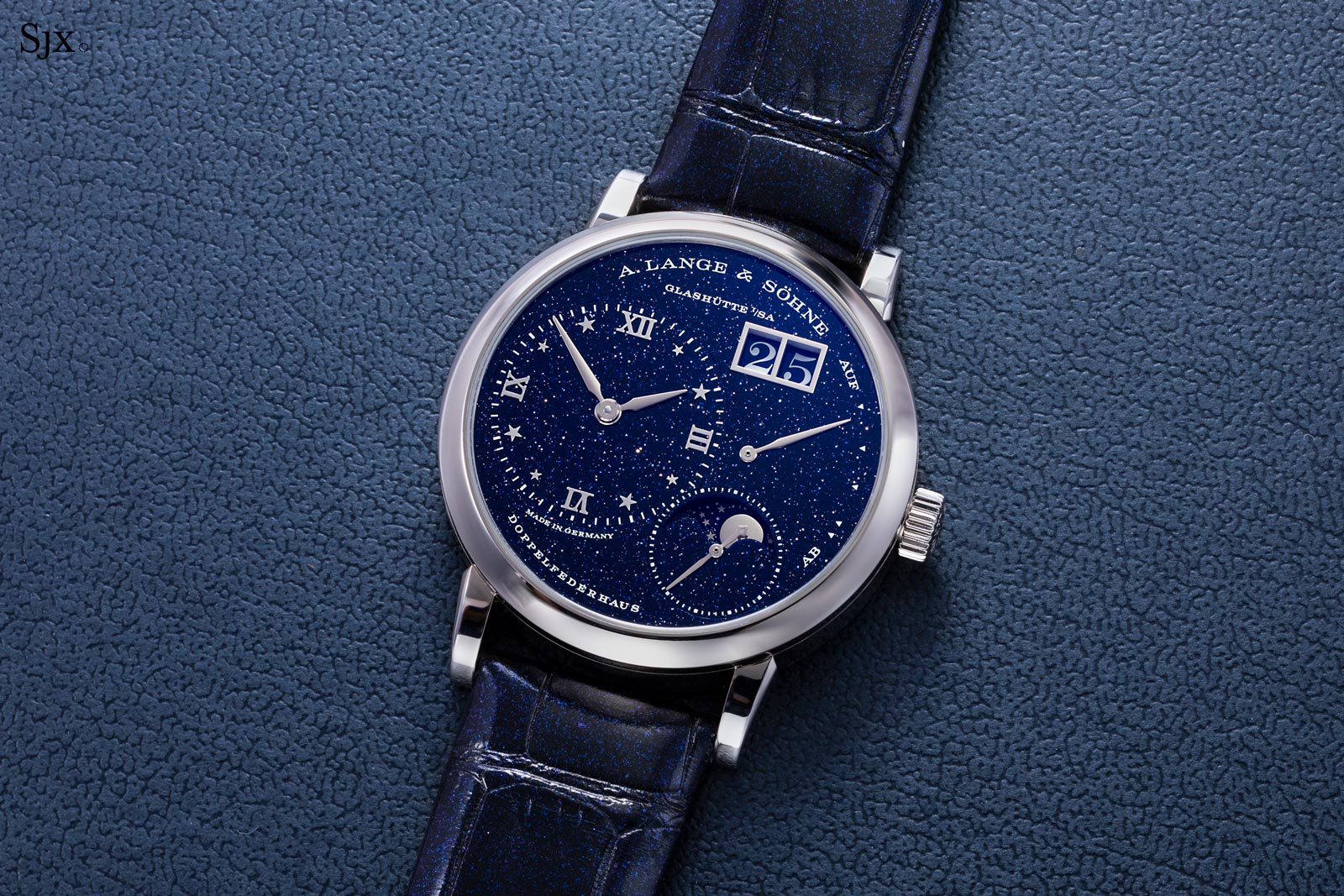 Launched just four years after the original Lange 1 debuted in 1994, the Little Lange 1 was created at the result of the brand’s retailer in Southeast Asia, where most buyers gravitated towards smaller case sizes at the time.

Though the original Lange 1 at 38.5 mm is modestly sized by today’s standards, it was large in the 1990s. For comparison, the flagship Patek Philippe perpetual calendar chronograph of the period, the ref. 3970, was just 36 mm.

At almost 37 mm, the modern Little Lange 1 is slightly larger than the 35 mm original of the 1990s, but it feels almost the same and the difference in size is not discernible unless the two are compared side by side. The current version retains the defining feature of the original, namely a small, recessed pusher to adjust the big date, instead of the button that is a signature feature of the full-sized Lange 1. 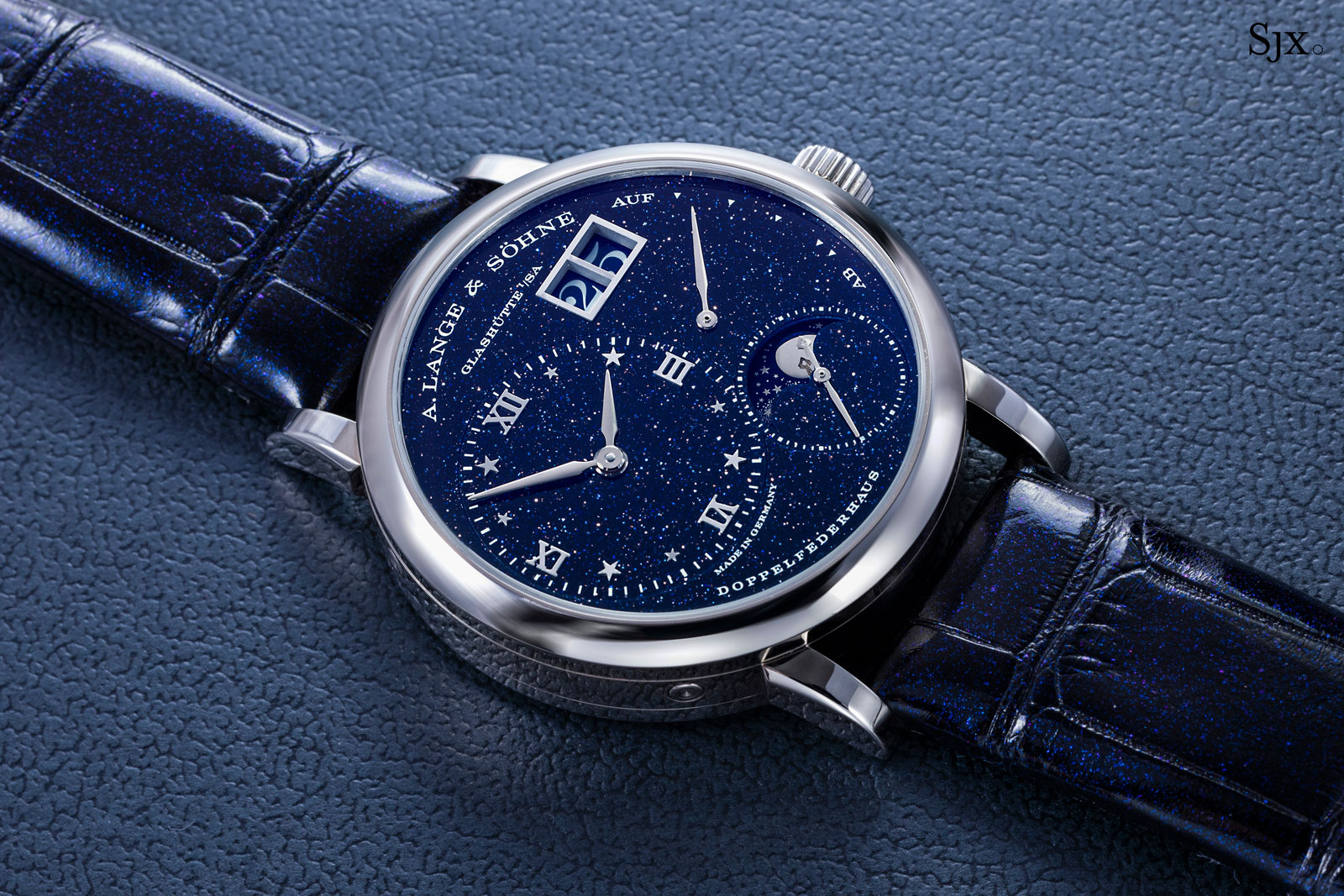 The rectangular date corrector at 10 o’clock has been replaced by a recessed pusher, mirroring the moon phase corrector at 7 o’clock

Being a mens’ watch originally, the Little Lange 1 was offered in the same muted palette as its bigger brother, including the monochromatic platinum version with a silver dial that has been nicknamed “Stealth”. As mens’ watches grew larger, so did watches for women, resulting in the Little Lange 1 being repositioned.

With its transition to a ladies’ model, the Little Lange 1 was dressed up in fancier livery, mostly notably with dials in mother-of-pearl and guilloche in colours, the occasional model set with diamonds, as well as a range of pastel-coloured straps.

The current Little Lange 1 certainly caters to the female watch buyer, though it is not specifically marketed as such (as is the norm in watchmaking). The latest model, however, strikes a balance that makes it a well suited for both genders. 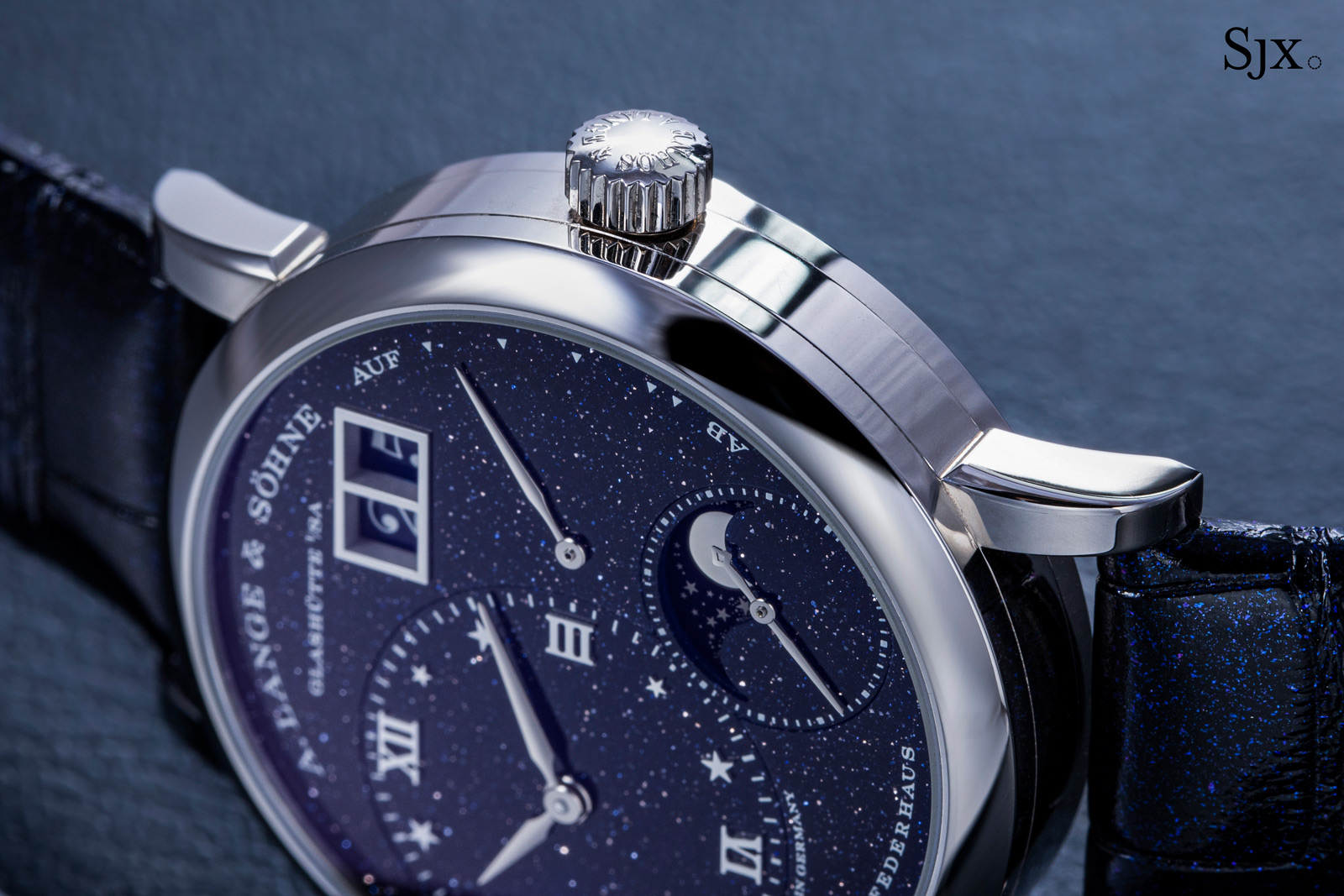 Unusually for a modern Lange, the case middle is polished instead of brushed, which is the standard finish for ladies’ watches

Once a Venetian secret

Aventurine glass has been something of a favourite at Lange recently. It’s been found on the Saxonia Thin since 2018 in a variety of colours, though this is a first for the Lange 1.

Aventurine glass, also known as goldstone, is made with technique that dates to the 17th century, when the material was invented by Venetian glass blowers. Fabricating the material requires mixing molten glass with metal oxides, then waiting for the mixture to cool, during which the metal oxides crystallise, resulting in the glittering appearance of the material. 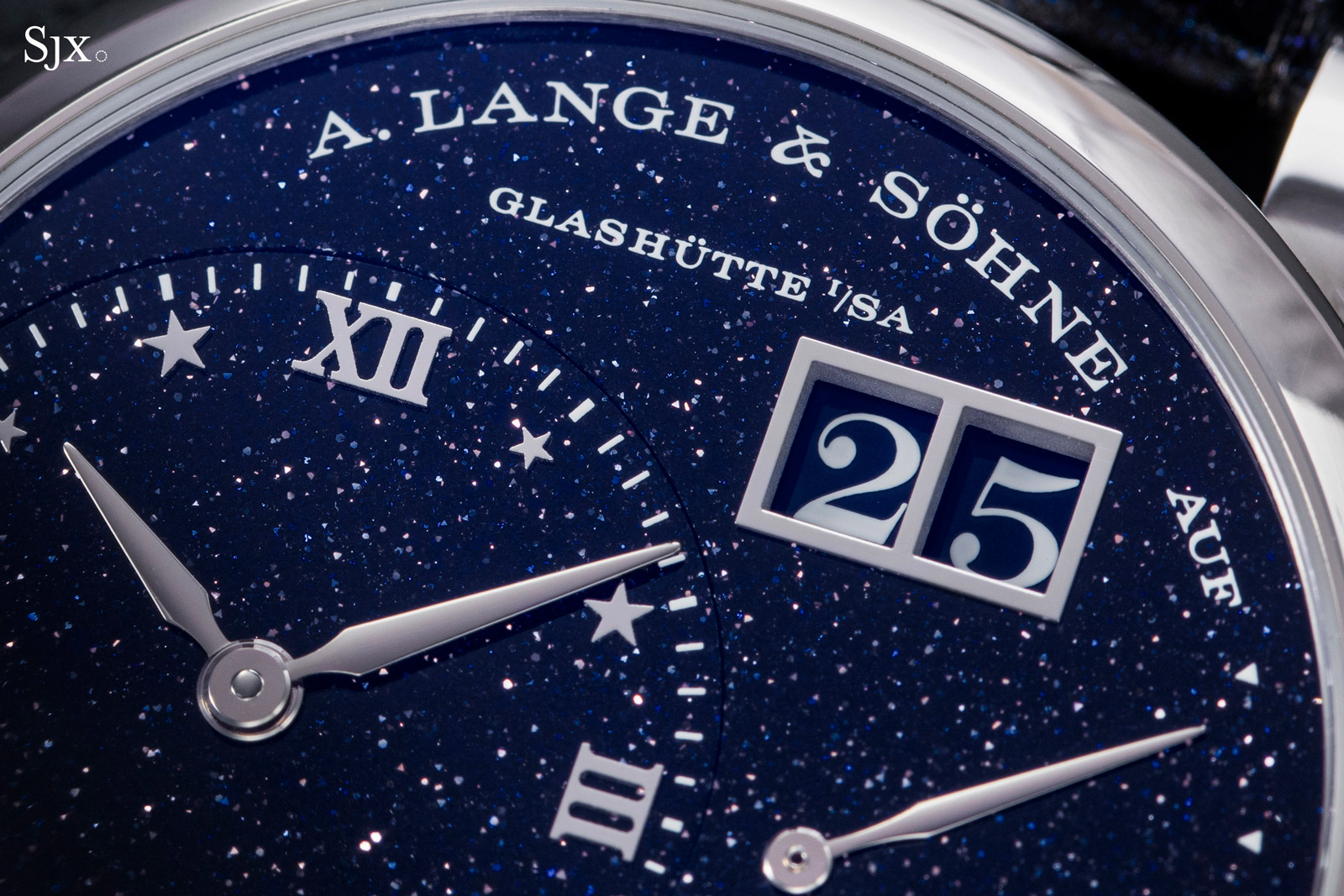 In the case of Lange’s watch dials, the molten glass mixture is poured onto the solid silver dial base and left to cool, allowing it to harden and fuse with the base. The resulting blank can then be lapped or chamfered as needed to create the finished dial.

For a brand that largely sticks to conventional dials with a galvanic or PVD finish in muted colours, the aventurine glass dial is certainly unusual. And the material is arguably a better fit for the Little Lange 1 than the Saxonia Thin, since the moon phase and asymmetric dial lend it more charm.

Here the design is taken to next level with star-shaped markers, a surprisingly whimsical detail from a German watchmaker that is usually conservative. There is only one other Lange with star-shaped elements on the dial, the complicated and limited 1815 Rattrapante Perpetual Calendar Handwerkskunst, which was a far more artistic and artisanal watch. The dial is actually three discs – the main dial plus two sub-dials. As a result, the registers for the hours and minutes as well as subsidiary seconds are slightly recessed.

I find the sub-dials too large for the case on the original Little Lange 1, which reduces the case diameter but retains the same dial as the full-sized model. That gives the dial a constricted appearance with the indications appearing squeezed into a small aperture and positioned too close to the bezel edge.

The sparkly metallic specks of aventurine glass, along with the stars and moon, are the visual focus, making the dial proportions less obvious. A tale of two moons

That said, if there’s one thing I would change about the dial, it is the moon phase disc, although strictly speaking that’s more of a movement upgrade.

While it has more stars than the moon phase disc on the standard model, it is mechanically simpler than the display in the full-size Lange 1 Moon Phase, which doubles up as a day-night indicator. That’s a matter of technical constraints, since the double-function indicator requires more height, resulting in an overly thick case for a small watch. Still, it would have been nice to have. The day-night indicator in full-sized moon phase model is a two-level display: a lower disc with stars and an upper double moon phase made up of two polished moons. Both rotate at different rates, with the lower disc indicating day or night while the moons indicate the age of the moon.

This means the display changes gradually throughout the day, making the dial a bit more interesting. At the same time, the plain, blue area of the disc indicating daytime would contrast well against the aventurine glass.

The moon phase showing daytime on the large model. Image – A. Lange & Söhne

That brings us to the movement, the L121.2. It is identical to the L121.3 found in the full-sized Lange 1 Moon Phase save for the double-function moon phase display, which could not be incorporated due to case height and dial thickness as alluded to earlier. And despite the different case sizes, two calibres share the same size, explaining the less-than-ideal dial proportions that I mentioned before.

Still the L121.2 is a Lange movement. And Lange watches are coveted for the movement finishing. Why? 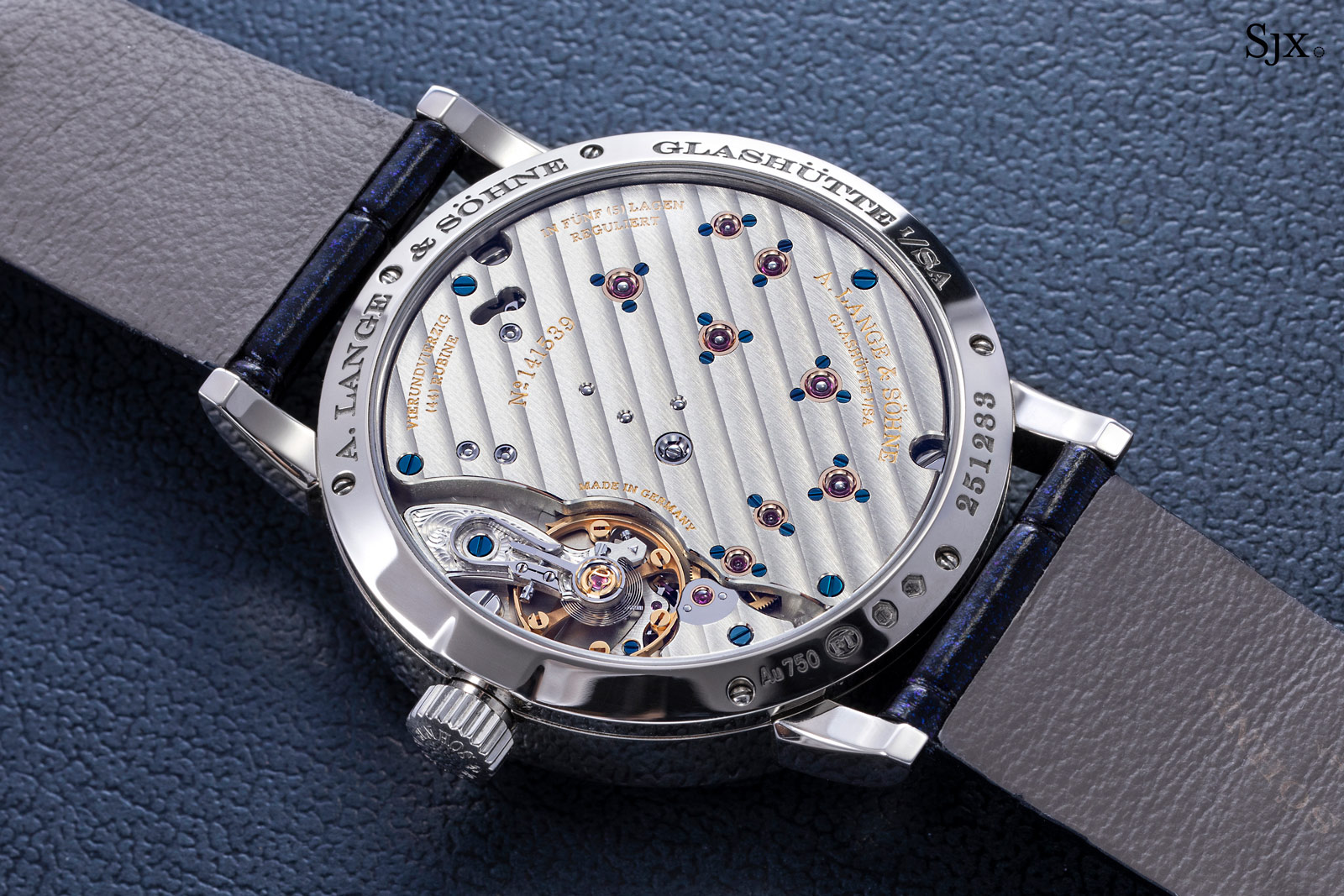 The answer is obvious through the open back. For starts, the striping on the three-quarter plate is fine, lustrous, and consistent. The striping is just nice and arguably executed better than movements in similarly-priced watches, which sometimes have striping that’s too heavily applied. Combined with the hue of German silver (which is a brass alloy), and the result is a warm, silky canvas for the rest of the decoration.

That includes the bevelling on the three-quarter plate and bridges, which is rounded and mirror polished. This is done with manually, either by applying the component (which is secured in a vice) against a polishing wheel, or with a hand-held, motorised tools. The result is a smooth edge with no machining marks. That said, the bevelling contains no inward angles, often a hallmark of top quality hand finishing (albeit not the only element of the art). This is occasionally found in simpler, more affordable examples from establishment brands such as the time-only Vacheron Constantin Traditionelle. Still, I have no complaints because the movement is done extremely well. Another detail that is classic Lange are the heat-blued screws and gold chatons for the jewels, neither is traditional for Swiss movement, and the latter in particular is an anachronistic feature that reflects Lange’s 19th century inspiration. Notably, some of the exposed pivots and screws on the three-quarter plate are held in polished, bowl-profile chatons, an unusually elaborate execution that is typically unnoticed.

Last but not least is the hand-engraved floral motif on the balance cock that is similar modelled on the brand’s antique pocket watches. The quality of the engraving is on par with the rest of the finishing, which means it is fine, neat, and workmanlike. 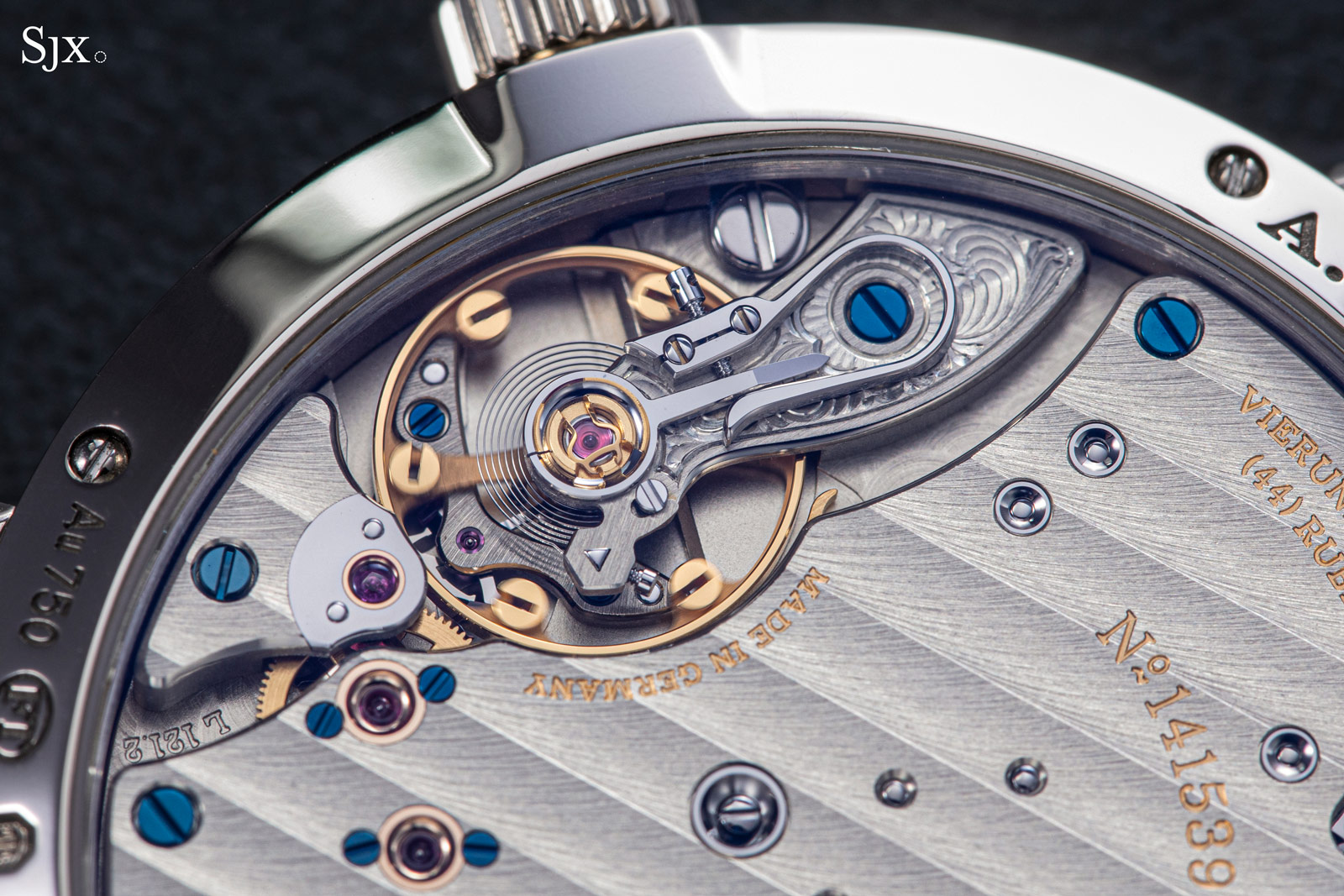 With its decorative yet understated dial, the Little Lange 1 Moon Phase is a pleasing addition to the lineup that is arguably the only Lange 1 well suited to wrists of both genders.

And for Lange enthusiasts who might already own a few of the brand’s watches, this is different enough to merit consideration. It is more elegant and charming than Lange’s imposing, complicated watches. It easily differentiates itself from a standard Lange 1, differing not only in size and style, especially the whimsical star-shaped markers.