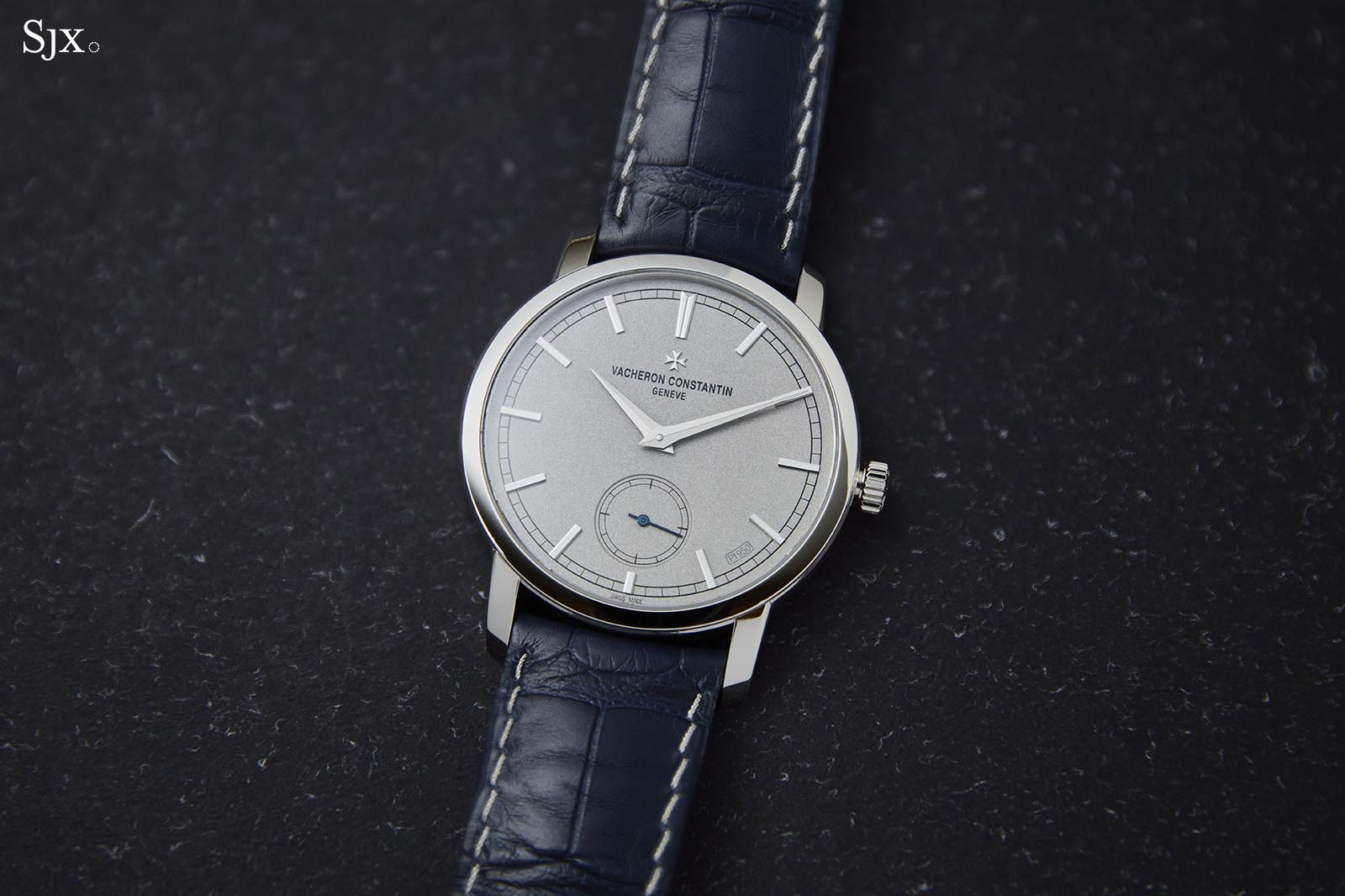 Every couple of years Vacheron Constantin gives one of its watches the ‘Collection Excellence Platine’ treatment, constructing the watch entirely in platinum, from case to the stitching on the leather strap.

Now the line is joined by the hand-wound Traditionnelle, a simple, time-only watch executed in the most precious way possible.

A focused exercise in classic dress watch design, the Traditionnelle Manual-winding is among the leading candidates in the category of hand-wound, time-only dress watches. It is arguably the quintessential Vacheron Constantin formal watch, being free of complications and superfluous elements.

And though it faces strong competition from the likes of the A. Lange & Söhne 1815 and Patek Philippe Calatrava, the Traditionnelle ‘Collection Excellence Platine’ (CEP) is unique in being all-platinum, end to end. 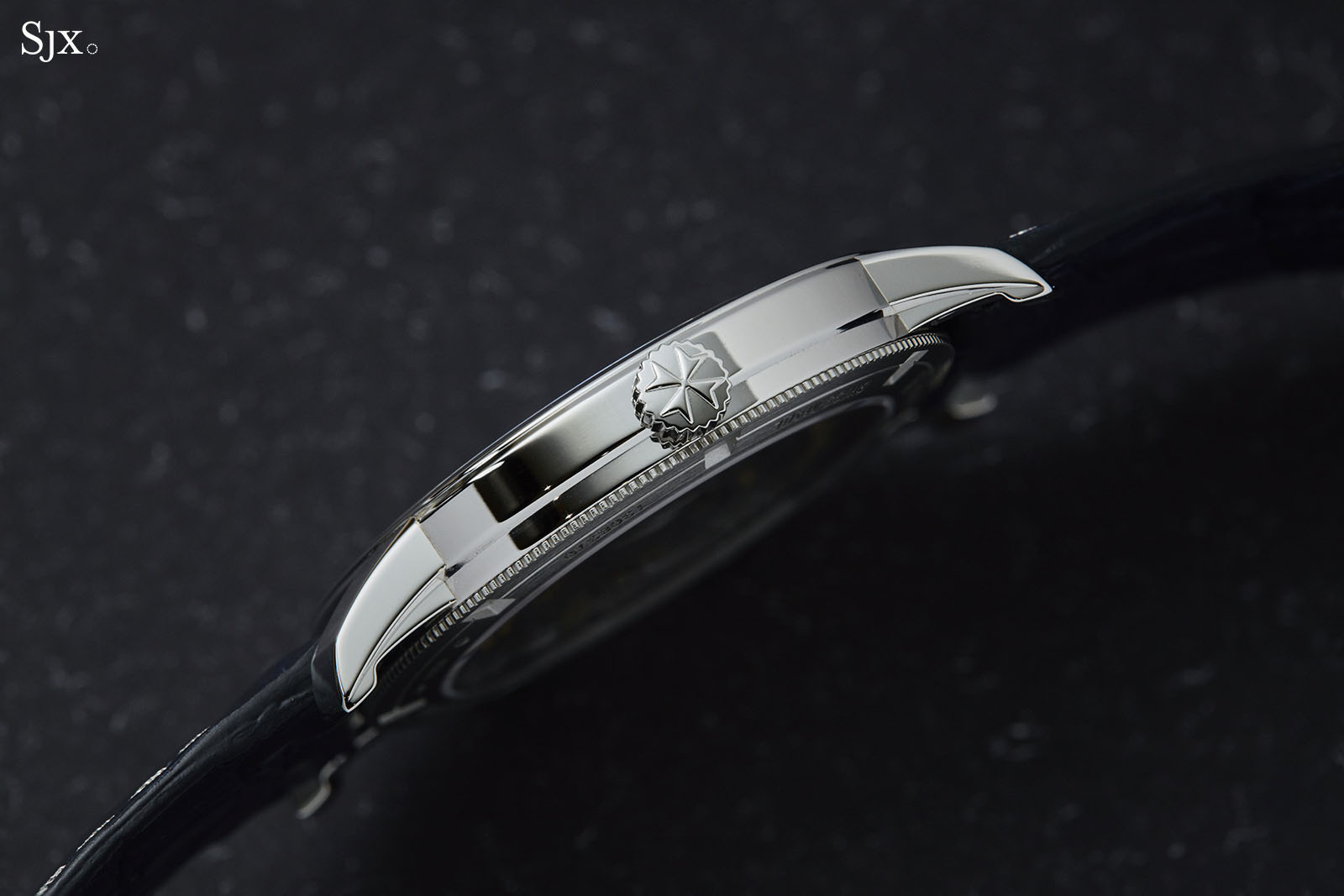 With the CEP treatment, the watch has evolved to its ultimate form.

The dimensions of the case remain unchanged – 38mm wide and just 7.77mm high. It features discreet decorative details like a fluted case back and straight, angular lugs that incorporate the form of a Maltese cross.

But in the area where most time-only dress watches tend to fall short – the tangible quality of weight in hand – the Traditionnelle CEP has a heft that is striking and gratifying. Though the watch is compact on the wrist, its weight is a reminder that it is there.

The case, dial, crown, plus the buckle and stitching of the strap – are made of the precious metal. The only exception being the hour markers and hands, which are in white gold but plated in rhodium, so their colour matches the platinum parts.

Ultimately, the beauty of the CEP watches lie in their monochromatic subtlety, as the details that distinguish them are only obvious upon proximity, as it is here.

A signature feature of the CEP line, the dial has a frosted surface that bears a discreet “Pt950” hallmark tucked away between four and five o’clock. The hallmark is lightly engraved, so it is visible but not prominent.

As is typical of most contemporary Vacheron Constantin watches, the styling is distinctly modern, but with a handful of retro flavoured details, here taking the form of the mid-century style railroad tracks for both the minutes and sub-seconds.

While watches in the CEP line usually feature a handful of blue accents, here the only used of colour is with the blued steel seconds hand.

The resulting monochromatic look is deliciously understated and surprising unique in the field of dress watches. It lends the watch a sterile, modern look despite the irrefutably classical design.

Visible through the sapphire case back is the gorgeous hand-wound cal. 4400 AS. As with all Vacheron’s mechanical watches, it is finished to the standards of the Poincon de Geneve, or Geneva Seal. So in terms of decoration the i’s are dotted and t’s are crossed, albeit in a clean and consistent, rather than artisanal and lavish, manner.

Though the movement has a fairly simple layout with two large bridges, the bridge shapes manage to incorporate a handful of inward and outward angles with polished, bevelled edges. It has a 65-hour power reserve and a frequency of 4Hz.

The extravagant use of platinum on a simple, time-only watch presents an interesting paradox that makes the watch one of the stealthiest, most compelling models of the ‘Collection Excellence Platine’ range.

The only downside is that the all-platinum makeover means the CEP edition is over 50% more expensive than the same model in 18k gold. That’s a big enough premium that this isn’t an obvious or sensible upgrade over the standard gold version, although it’s probably worth the stretch for the enthusiast who values the material, discreet style and also limited number produced.