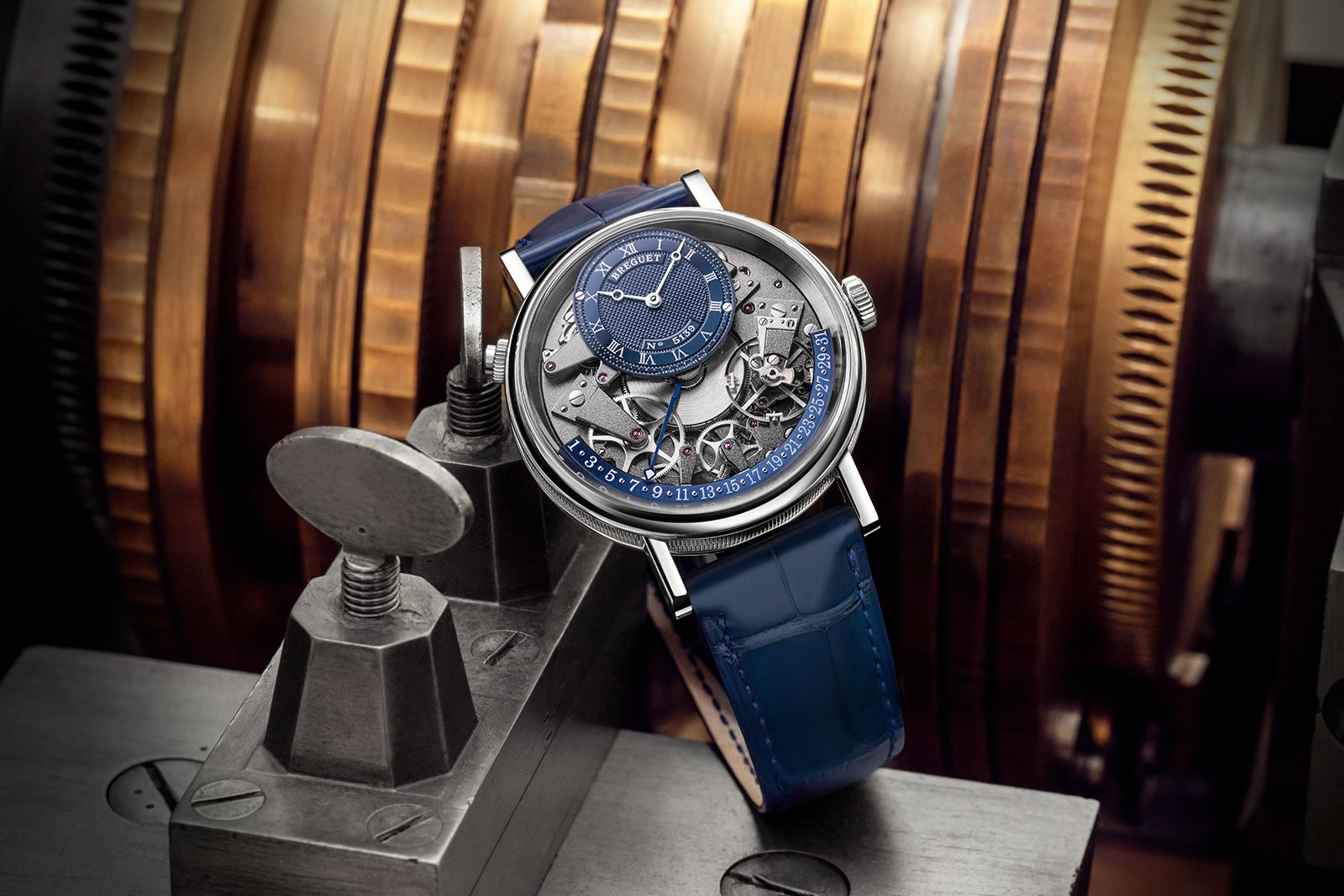 Introduced in 2005, the Breguet Tradition is characterised by its inverted movement that reveals most of the movement on the dial. It was a modern concept inspired by the 19th century: the movement was inspired by the souscription pocket watches created by Abraham-Louis Breguet.

Since its launch the Tradition has grown into a full-fledged collection ranging from time-only models to the top-of-the-line tourbillon with fusee-and-chain. One of the simplest, yet most striking, is the Tradition Quantième Rétrograde 7597, which has been given a new look with an attractive blue dial. 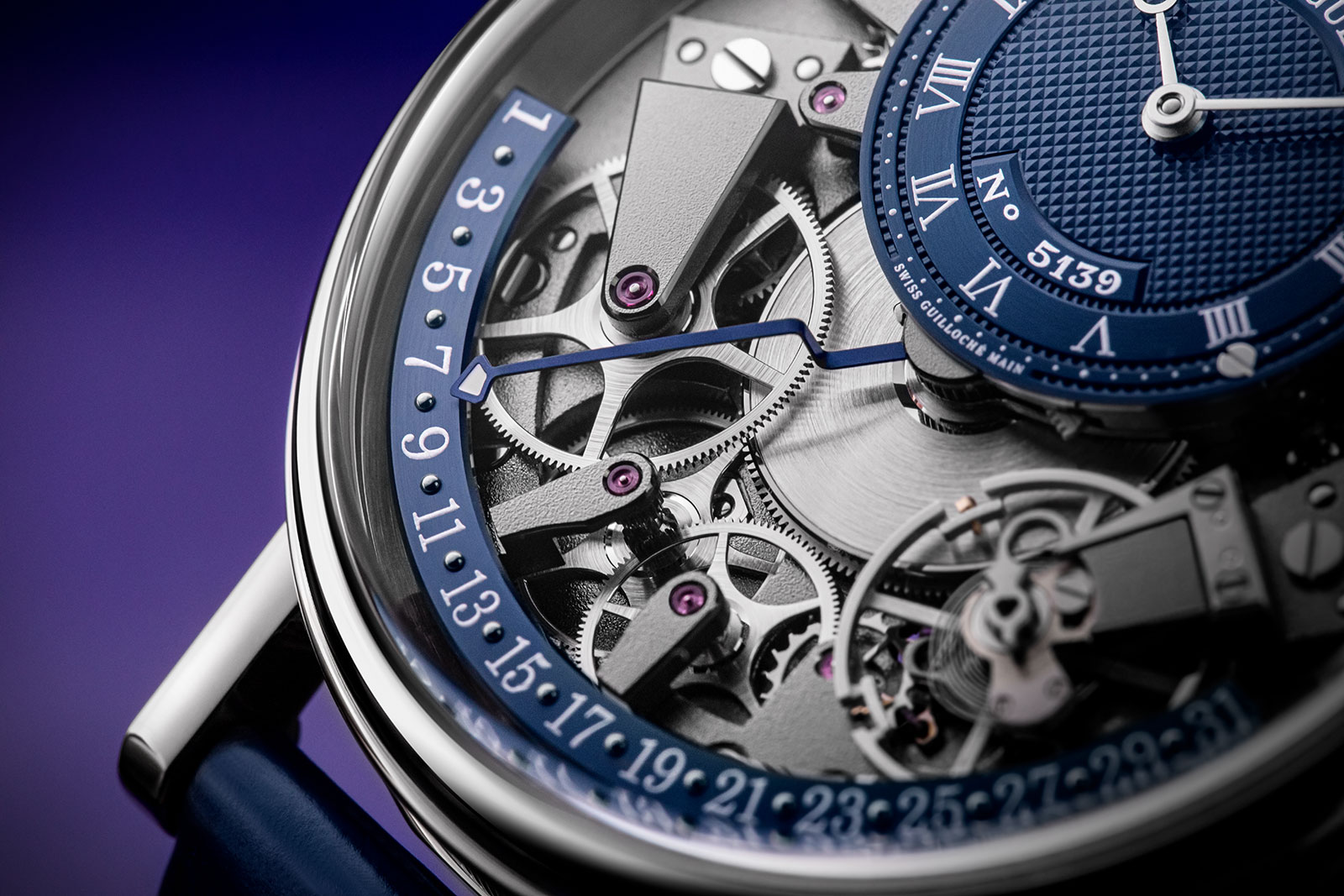 I have always found the Tradition attractive, particularly the early models with smaller case sizes that tend to work better with in traditional palettes like yellow gold or “pink-on-pink”. The newer models are more sophisticated mechanically, but their cases are larger while the colours are mostly modern in greys and blacks, so the retro-elegance is absent.

But the latest Quantième Rétrograde is amongst the best looking Tradition models in the current catalogue. It’s mechanically identical to the original introduced in 2020, but now it gets a two-tone dial that has more contrast, giving it with a stronger character and easily setting it apart from the more classical Tradition models. 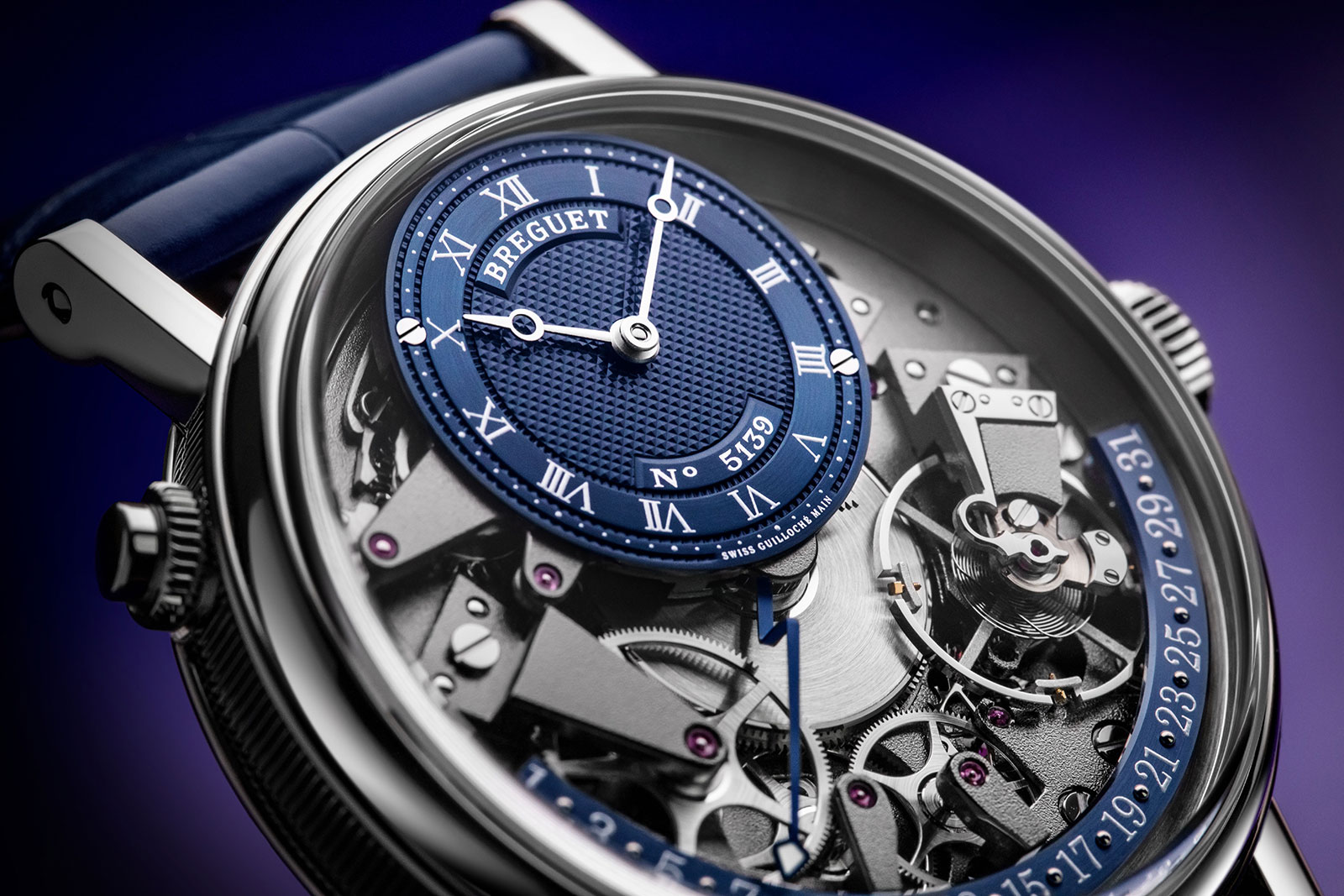 The blue-on-grey livery isn’t novel, since it was used before on the boutique edition Tradition 7097, a simpler watch that lacks the date. But the date is exactly what sets the Quantième Rétrograde apart. While date displays often get in the way of good design, the retrograde date contributes to the aesthetics here. The long, narrow date scale is an elegant detail that gives the dial balance.

The downside of the date indicator is the pusher at 10 o’clock to adjust the date. It is inelegant relative to the rest of the watch and I wish Breguet found a better solution for this.

While the Quantième Rétrograde isn’t particularly affordable in absolute terms, it offers good value. The inverted movement and retrograde date means it is a unique proposition at this price point. The usual Breguet quality and unique movement construction give it much intrinsic quality. And it’s one of the few appealing watches without a long waitlist, which is something in today’s market.

True to the traditions

The Tradition is modelled on the famous souscription pocket watches made in the late-18th century. They were novel for their construction but also concept: Breguet sold them on a “subscription” basis such that buyers had to pay for them upfront before taking delivery some time later.

While the Tradition movement is laid out like the souscription pocket watch calibre, it has been inverted such that the time is indicated on the same face as the balance wheel. It manages to be creative and contemporary while paying homage to tradition – no pun intended.

The traditional aspect of the watch continues with its decorative detail, namely the dial. It’s a disc of solid gold that’s engine turned the traditional way – with a manually-operated straight-line engine – resulting in the guilloche surface. Then comes modernity: the dial disc is subsequently galvanically coated to give it the deep blue metallic finish.

But the detail of the dial goes beyond just the hobnail guilloche. It boasts several layers of detail that give it the intricate, expensive look that is typical for Breguet. That is also true for the date scale, which is brushed on top and bevelled on its sides, while having domed pins on the top to separate the date numerals. 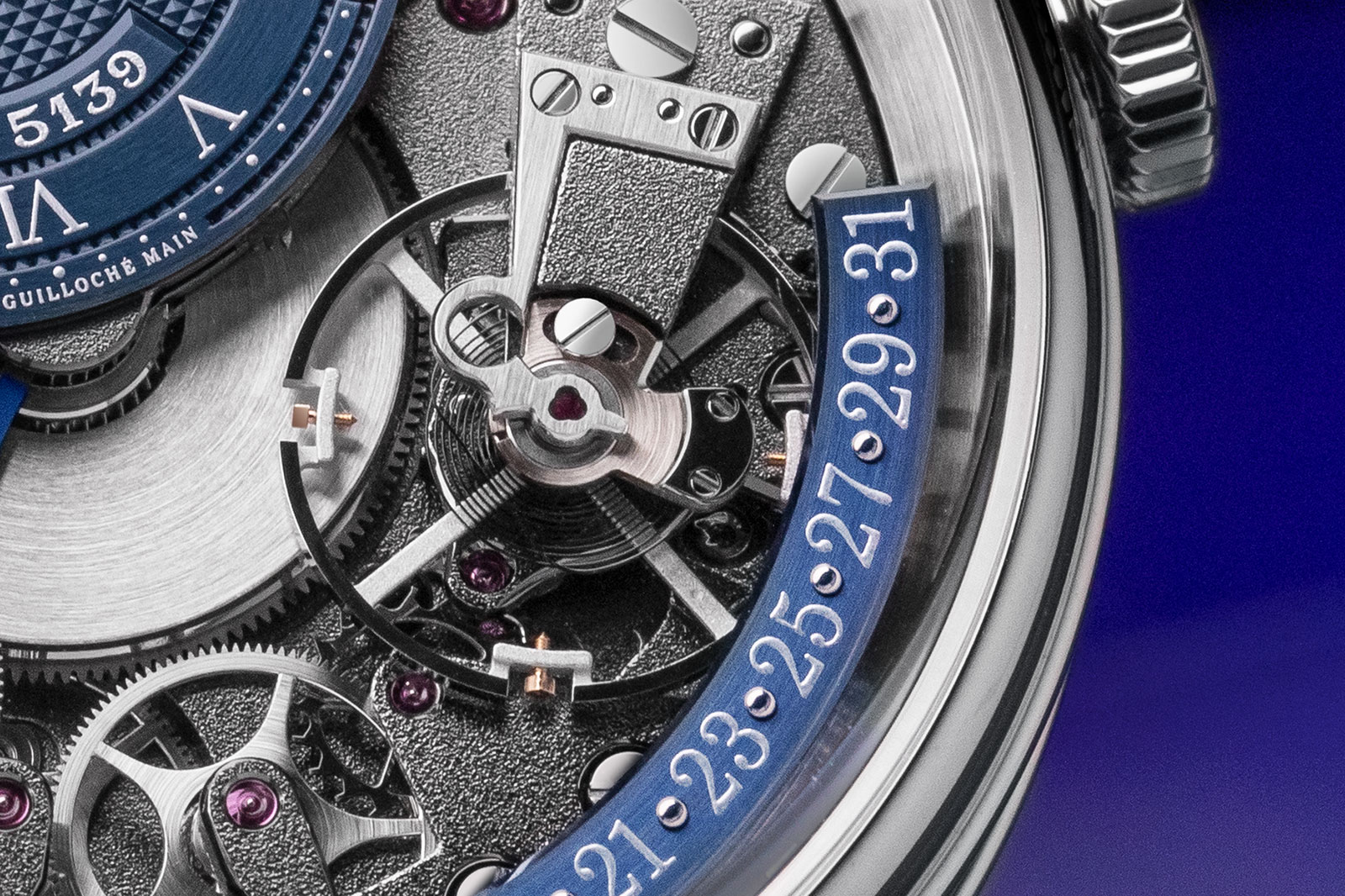 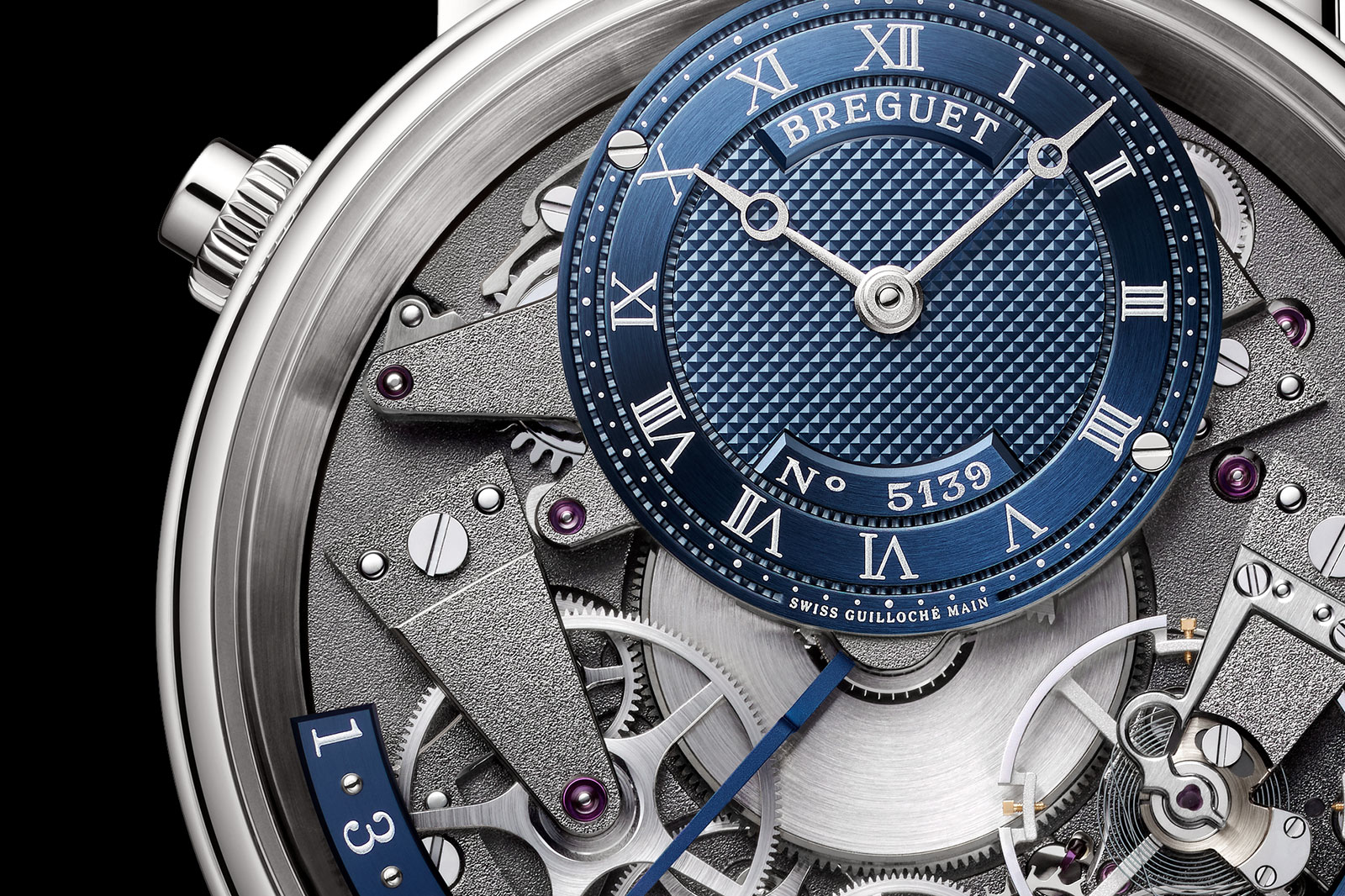 Perhaps because the bridges and base plate are entirely frosted and finished in dark grey, the finishing appears simple at first glance, but in reality it is detailed and thorough, with even the spokes of the wheels having narrow bevels

While the front is intriguing, the back is plainer, as is expected given the inverted construction – though it’s still finished to the same standard.

The highlight is the axe-shaped rotor that’s modelled on the hammer-winding mechanism found in Breguet’s perpetuelle watches, which were amongst the earliest self-winding timepieces ever. But the rotor is entirely modern in function and spins 360 degrees to wind the mainspring efficiently. Availability: Already at boutiques and retailers
Price: US$38,600; or 55,500 Singapore dollars

Revitalised with a sweeping date.