Breguet is one of the grandest names in watchmaking, and mostly makes watches that are rooted in its history. The aptly named Tradition exudes, well, tradition. Modelled on the souscription pocket watch created by Abraham-Louis Breguet in 1796, the wide-ranging collection has been gently modernised in recent years. The newly-announced Tradition Automatique Seconde Rétrograde 7097 continues that trend, with a dark blue guilloché dial against a grey movement.

This version of the Tradition 7097 is possibly my favourite yet, mostly because of the off-centre dial in blue. Engine-turned by hand, the blue dial is striking against the monochromatic movement. And it looks especially appealing when compared against the earlier versions that have plainer and more conventional silvered dials, which offer less contrast against the movement.

But as with all other Tradition watches, there’s a nit to pick here: the serial number plaque on the dial makes it look a bit cluttered, especially since the dial is small to begin with. One solution would be to put the serial numbers beside the Breguet logo, as done on the female Tradition Dame 7038.

And while I like the retrograde seconds, its position feels awkward as it cuts into the sub-dial. Though intersecting indicators are a feature in some historical Breguet pocket watches, the face of the Tradition is a bit too small to accommodate it comfortably.

The white gold case is in classic Breguet style a delicately-fluted case band and narrow lugs. At 40 mm wide and 11.8 mm tall, the watch is a good size that complements the open-dial design.

The watch is powered by the cal. 505SR1 that’s symmetrical and open on the front, with the layout of the bridges, escapement, going train, and barrel modelled on the reverse of the souscription movement developed by Breguet, which got its name from the deposit that buyers had to pay in order to “subscribe” for the watch. Besides the layout, many smaller elements are also derived from the vintage pocket watch movement, including the U-shaped pare-chute shock absorber spring for the balance jewel.

While the overall look is historically-inspired, the movement is intrinsically modern. The technology inside includes silicon pallets and a silicon Breguet overcoil balance spring that aids with chronometry. 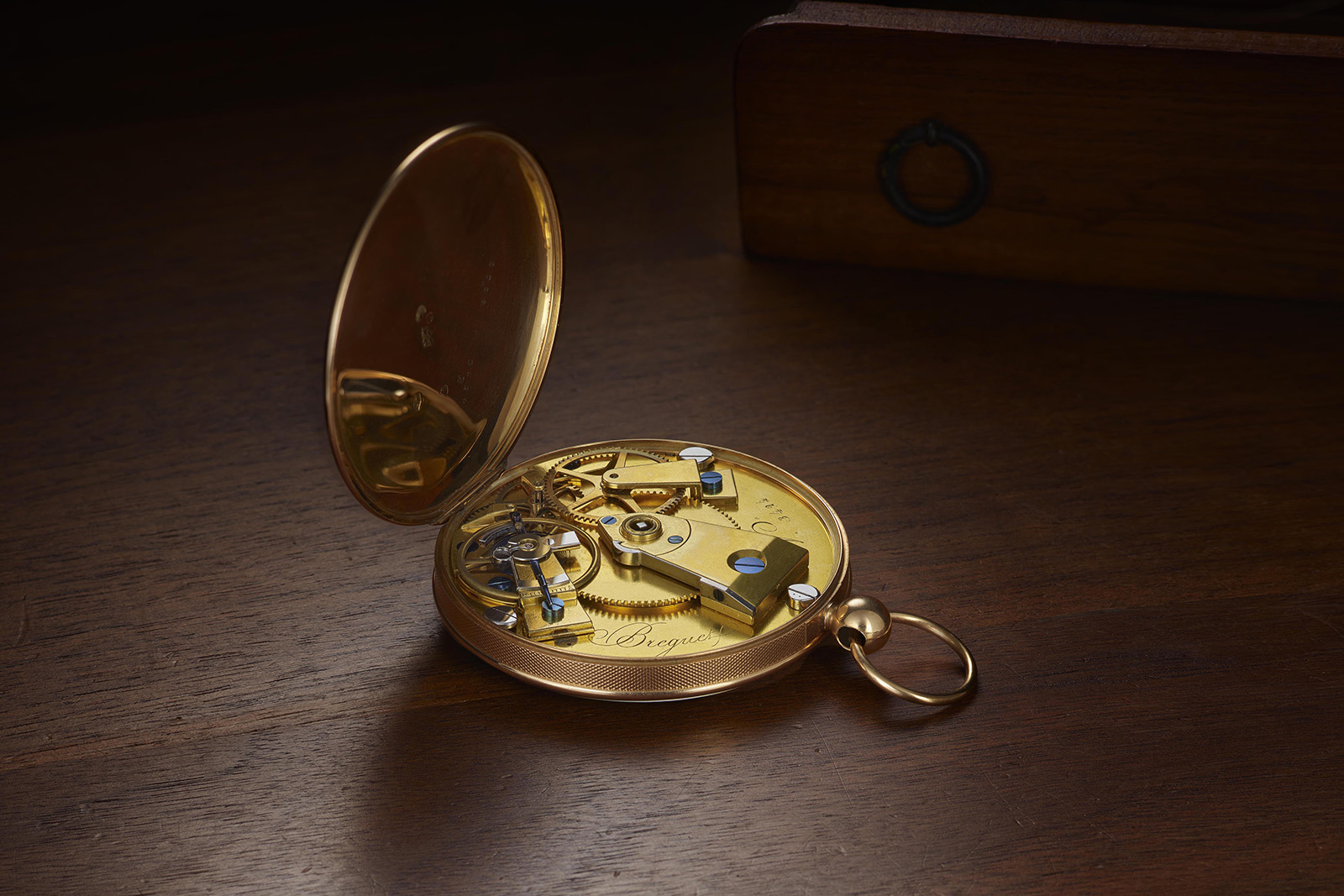 An original souscription pocket watch with its movement revealed

The finishing similarly takes its cues from the pocket watch, but rendered in modern colours. Instead of an old-school yellow-gold gilt finish, the movement is finished in grey, ruthenium plating.

And visible through the transparent case back is the hammer-shaped rotor that is inspired by the platinum rotor of Breguet’s perpétuelle mechanism, one of the first automatic winding systems ever. While the perpétuelle was a actually a hammer-winding system, with the rotor swinging back and forth over a short distance, the rotor in the Tradition is a conventional rotor that spins feely in both directions.